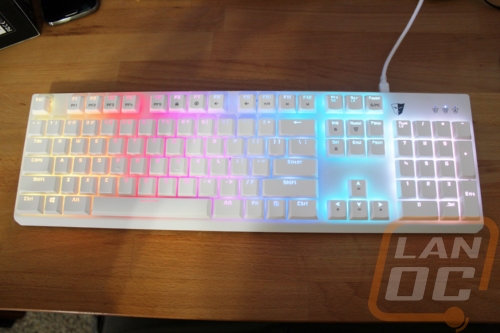 When going into the review I was mostly interested in the Gram Spectrum because of the new Tesoro Agile key switches and the keyboards bright white design, something that I don’t see that often in full sized keyboards. Beyond that I expected the Gram Spectrum to be similar in construction and quality to past Tesoro mechanical keyboards. That is because for the most part all of my Tesoro keyboard reviews have been similar with a decent quality keyboard that is always just a few features away from being in the same class as top keyboards on the market. Well with the Gram Spectrum I was completely blown away, the build quality and overall construction of the Gram Spectrum is nothing like past Tesoro keyboards and up into the enthusiast category, not the normal “gamer” focused quality we typically see.

Tesoro designed the Gram Spectrum with a thinner bezel design that makes for a slightly smaller keyboard while still being a full sized keyboard. All of the normal media controls and multiple profiles are all there as well. The RGB backlighting is bright, really bright, partially due to this being a bright white keyboard. The all white design looks great, it didn’t take long for my wife to try to take the keyboard from me in testing. If they dropped the Tesoro branding and the labels for the LEDs indicators I think you could sell this under any of the enthusiast brands without anyone noticing.

The Tesoro Agile key switches that I was excited to check out ended up being better than expected as well. It wasn’t their short throw that got me, in fact, I would be just as happy with a normal throw, it is how smooth they are. Combine that with quality double shot keycaps that are a little thicker than what you normally find on a consumer keyboard and it is really great to type on, even with the flat profile of the keycaps. The double shot keycaps are a feature that most won’t even notice but add considerably to the overall quality of the board. They will never wear through like the normal painted keycaps that backlit keyboards have.

With all of the good things about the Gram Spectrum, I expect it to have just as many issues but it really came down to one big issue and one smaller one. The big issue was the ugly font that they used for the key legends. I wasn’t a fan of it, but I really started to hate it when typing and I found some keys to be hard to read. F10, for example, looks like F11 and @#%& all are hard to see as well. The smaller issue was just that I would like to see more lighting effects added, in fact, I would love to see the software revamped completely or dropped to match the high quality of the keyboard. With on keyboard RGB controls like Ducky and Cooler Master and a better font, this could be one of if not the best RGB keyboard on the market.

With an MSRP of $119.99, the Gram Spectrum ends up priced less than all of the other RGB keyboards that I would consider to be similar in quality or features like the MasterKeys Pro L and the Corsair RGB keyboards. They do have to overcome the fact that this is a little expensive for a brand that fewer people know, but it is a great keyboard as long as you don’t mind that font and don’t expect toy level RGB controls. 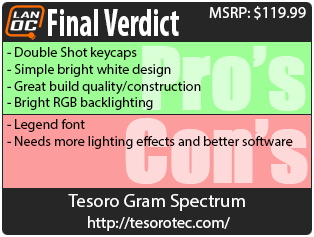 You might call him obsessed or just a hardcore geek. Wes's obsession with gaming hardware and gadgets isn't anything new, he could be found taking things apart even as a child. When not poking around in PC's he can be found playing League of Legends, Awesomenauts, or Civilization 5 or watching a wide variety of TV shows and Movies. A car guy at heart, the same things that draw him into tweaking cars apply when building good looking fast computers. If you are interested in writing for Wes here at LanOC you can reach out to him directly using our contact form.
Discuss this article
Log in to comment
Posts in discussion: Tesoro Gram Spectrum