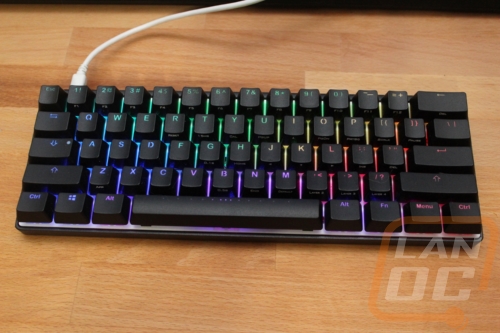 For testing the Vortex Pok3r RGB I spent a few weeks using it as my main keyboard and then for a few weeks I actually have been using it on our testbench due to the limited space on my desk. This gave me a great chance to use the Pok3r RGB while writing and gaming but then after that I was able to use it to fit a keyboard into a space that a traditional or even TKL wouldn’t fit.

As someone who uses an original Pok3r and a Poker 2 often, switching to the Pok3r RGB was easy. I do think that people who aren’t used to the smaller form factor will need a little more time to adjust. I know I’m not a big fan of using a function layer, but using the function layer to get access to a few of the keys that I need from time to time wasn’t too bad. Most of the time it was just getting to an F row key or the delete key and both of those are really easy to remember. Everything else I took advantage of the secondary legends on the keys. When gaming this rarely became an issue, I had WASD and QWER access and my mouse. The only issue I ran into was when writing and especially when inputting graphs. Not having a number pad can be rough but I’m used to using the number row when needed. It was trying to use the direction pad on a function layer with the function key and the direction keys on the same side that caused me trouble. I really wish they still used WASD for the direction pad like on the Poker 2.

I was surprised at how quickly I adjusted to the new Nature White keyswitches as well. I’ve been really vocal in the past that my preferred switches are Clears and Browns. I can’t stand typing on clicky switches like greens and blues and reds and blacks weren’t far off as well. Getting the pressure matched with the Browns made a big difference, though. I still would prefer browns, but I do think this is the best linear switch that Cherry offers. I don’t know if they changed the material used as well but I think the Nature White is a little smoother as well, a lot like Gaterons. Remember when I wrote about the Cherry stabilizers I would have to keep a close eye on them for rattling. The stabilizers on the Pok3r weren’t perfect but the rattle wasn’t as bad as normal and after a little use, they seemed to wear in and improve as well.

So how did Vortex implement their RGB lighting controls? Well for starters they don’t use any software, so going in you need to be ready to get used to programming your layers with a few key combinations. It's actually really easy and similar to the Cooler Master Masterkeys Pro In a few ways. You can pick from a few different lighting effects like a breathing effect. My favorite would be the pinwheel color wheel, though. This rotates through the full range like a lot of the RGB keyboards do, but rather than doing the normal wave it rotates around the keyboard. My big complaint with the lighting controls is that had to look through the manual and even watch a video to find the controls. Vortex didn’t include any of the lighting controls in their secondary labels, so you have to remember what each key does. Each time I needed to change the lighting I fumbled around until I had completely messed it all up, then I would look it up. They should at least label the effects key, the RGB keys, and the brightness controls. 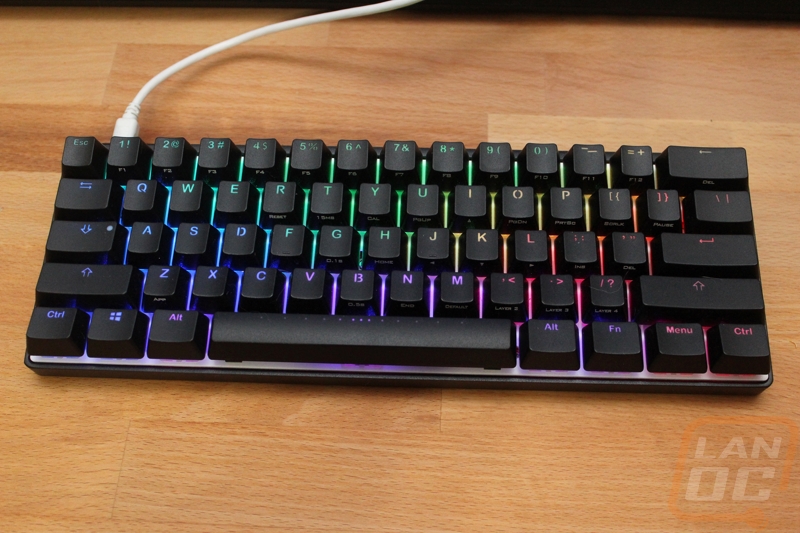 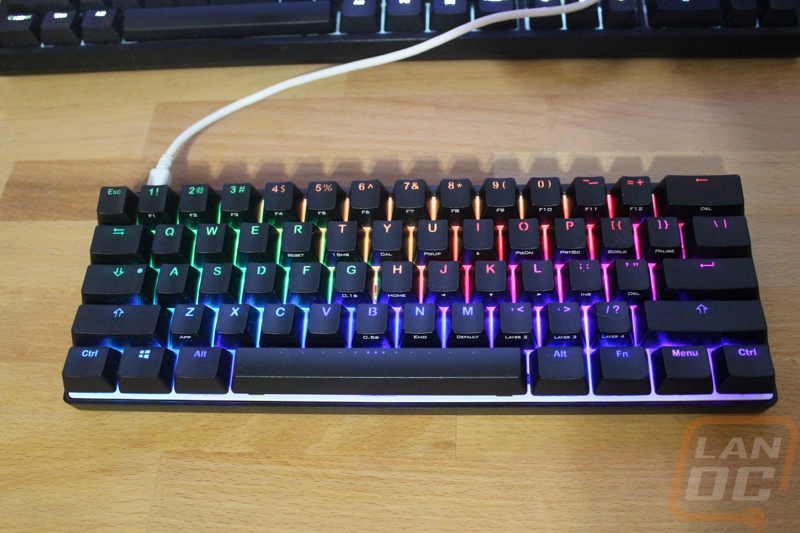 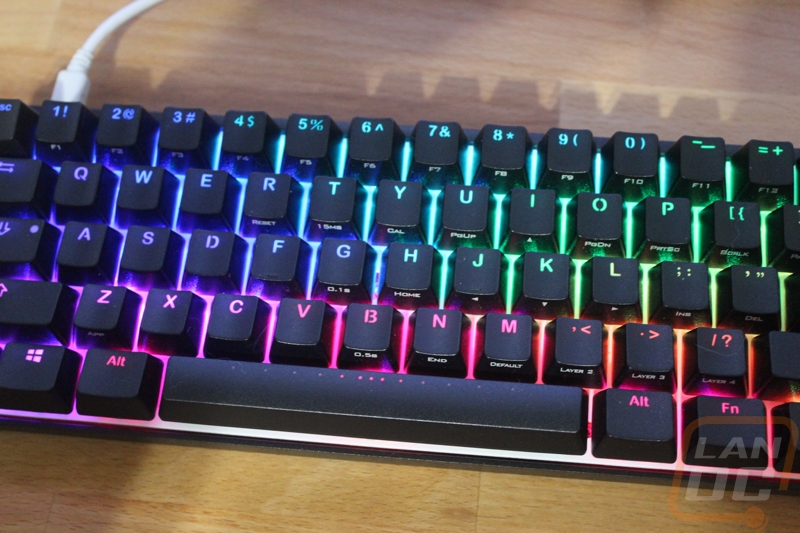 On top of effects you can set the whole keyboards color or if you want you can even assign colors to each key individually. They give you three keys, one red, one green, and one blue and they have 6 brightness levels. You press each until you get the color that you prefer and then you select the keys you want to put it on. The other option is to use the escape button and the entire keyboard lights up in a full RGB range and you can click the key with the color you prefer. 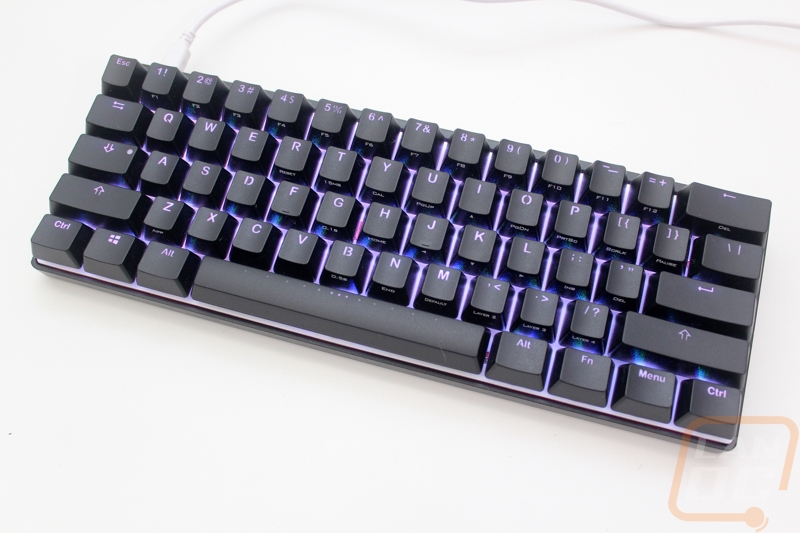 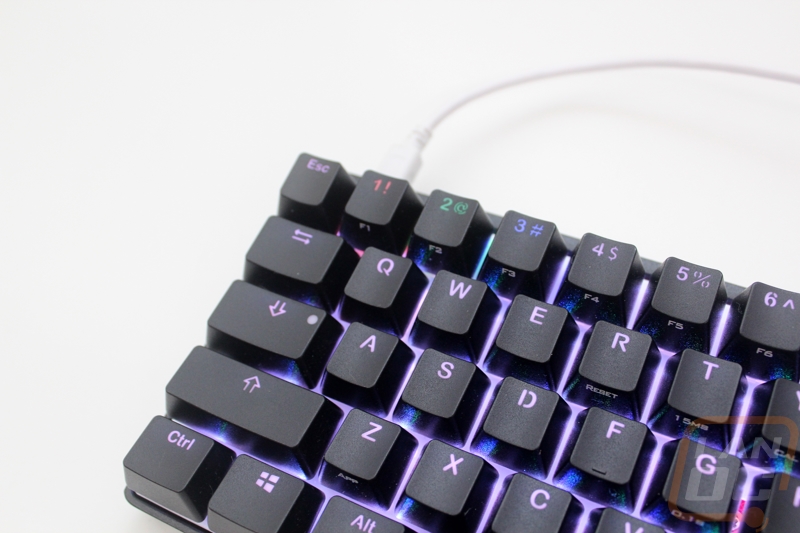 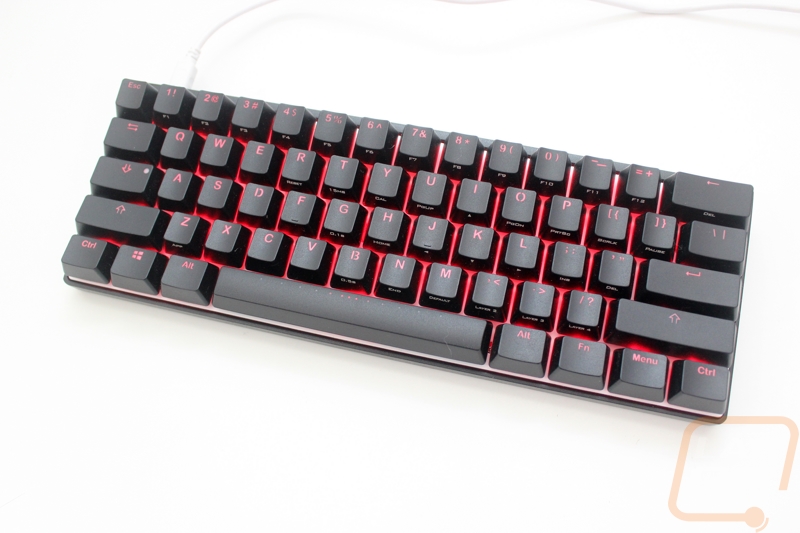 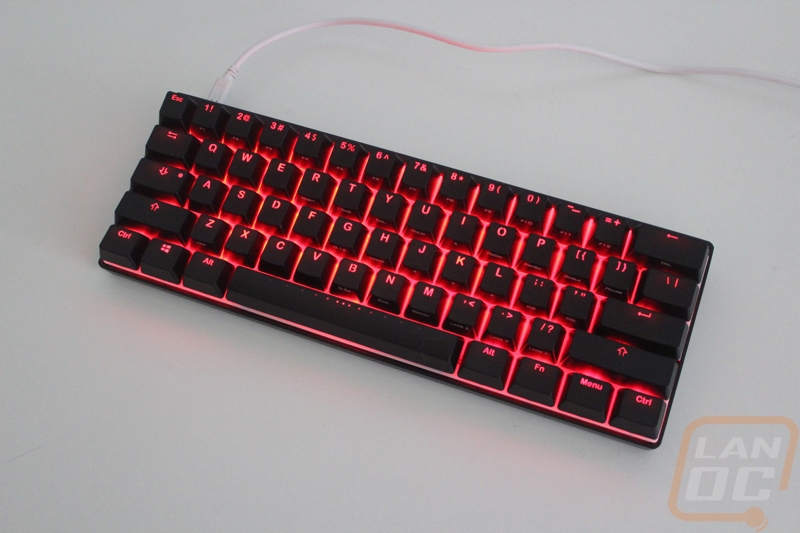 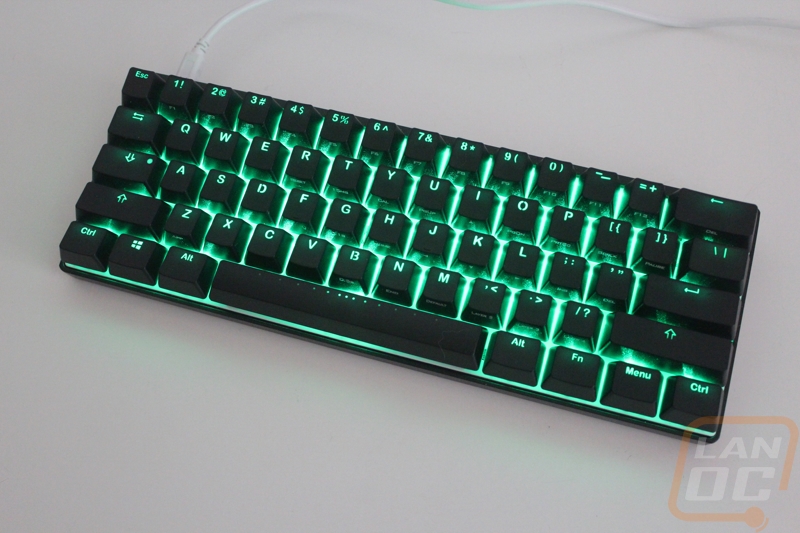 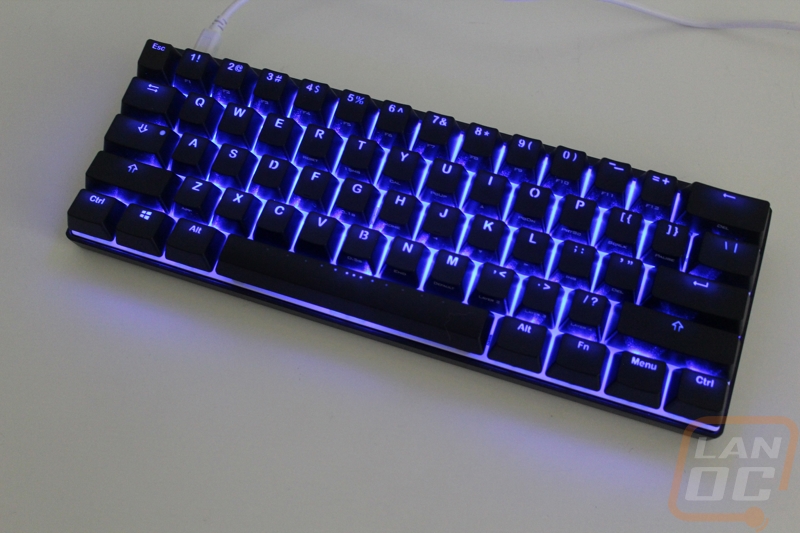 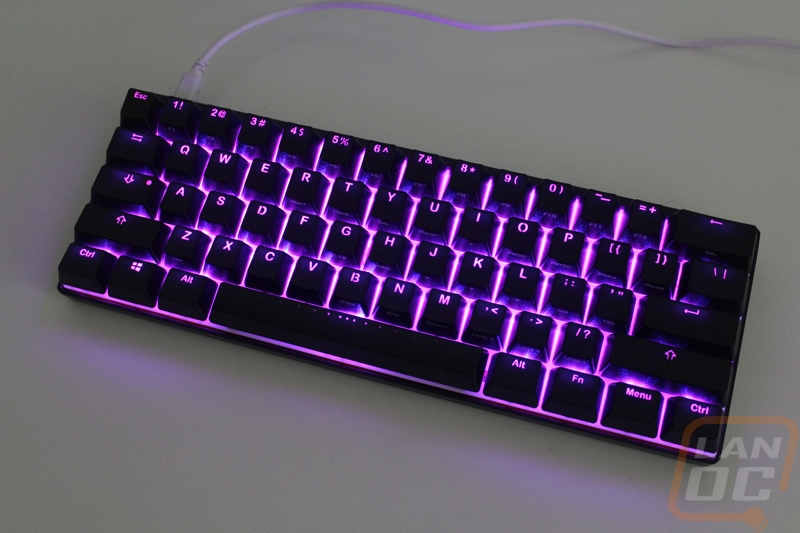 The RGB lighting is bright with the white backplate helping brighten things up. So bright in fact that when the brightness turned up the doubleshot keycaps start to bleed light badly, especially the modifiers. I was really excited when I saw that for the RGB Pok3r they were going with doubleshot keycaps because I’m tired of every backlit keyboard just having the painted caps. But I think Vortex should have just taken from their PBT backlit keycaps (and fixed the number row issues). They are very high quality, thick, and aren’t going to get glossy and wear out like the ABS double shots that they went with. It’s possible though that it would cost too much for them, but I will tell you right now I will be getting a set for the Pok3r RGB very soon! 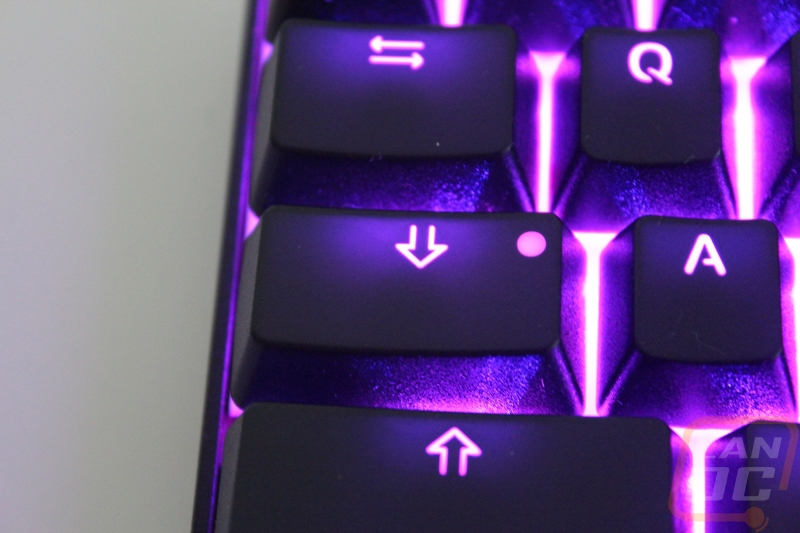 clatus replied the topic: #38089 19 Aug 2016 13:59
Good review. I purchased one and the open layout provides for some gorgeous RGB effects. Almost something you could just buy for display. However, I'm going to be returning mine because they have really bad stabilizer rattle. Backspace/Delete & Enter/Return are by far the worst. To the point it sounds like a $20 board and like two different keyboards between stabilizers/non-stabilizers. My Ducky Shine 2 wasn't nearly as bad. Could I squeeze some lube in there? Sure, but it's not guaranteed to work and then not only can I no longer return it but I probably voided my warranty on a brand new $140 board.
Read More...

We have 1623 guests and one member online