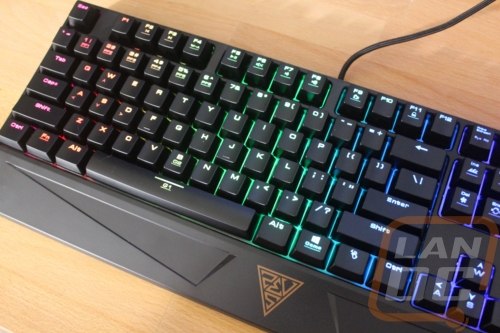 So the Gamdias Hermes RGB looks fairly unassuming when you first check it out. It is a standard full layout keyboard. When I say standard I mean completely standard so replacement keycaps will be easy to find where a lot of other RGB keyboards (other than the CM RGB) have a nonstandard bottom row. The Hermes RGB has a thin bezel on the top, left, and right sides. Down on the bottom it has an half length integrated wrist rest with the Gamdias logo in the middle and two triangle shapes carved into it. While I prefer to find my own wrist rest I do like this one with the exception of the two triangles that are bound to put indents into your wrists when typing. The wrist rest does give us a really good look at the plastic that Gamdias used though and I can’t completely put my finger on it but it feels like a poor quality plastic. A better finish or as much as I hate to say it a rubber coating would go a LONG way in making the Hermes feel like a higher quality part to me. 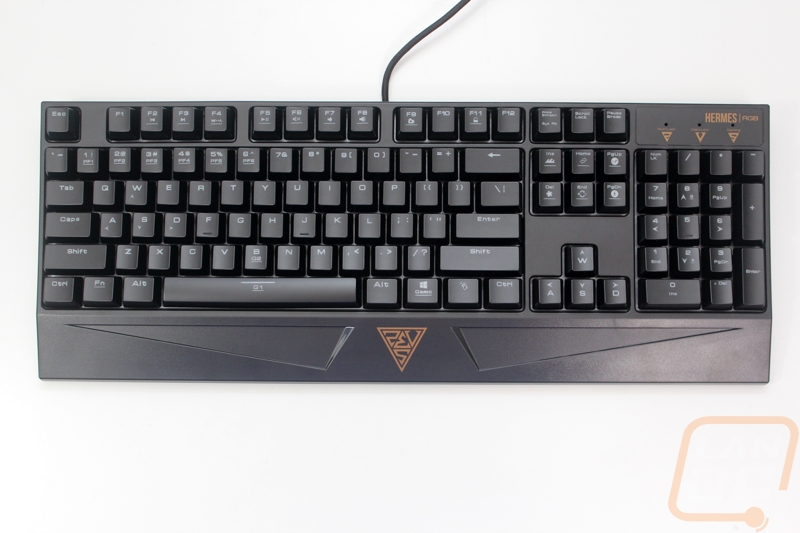 It may be a standard layout but Gamdias did slip in a few function layer features. For starters you can flip between the keyboards six different profiles by using the function key and the 1-6 number row keys. Up in the F keys you get media controls like forward and back, play, pause, mute, and volume up and down. You can also lock the windows key. In the keys between the keyboard and the number pad there are a few lighting control options that speed things up and slow them down or even let you switch to the RGB wave. Also interesting are the function layer macro keys in the space and B buttons. This gives you quick on the fly macros no matter what game you are playing, space is almost always directly under your thumb. 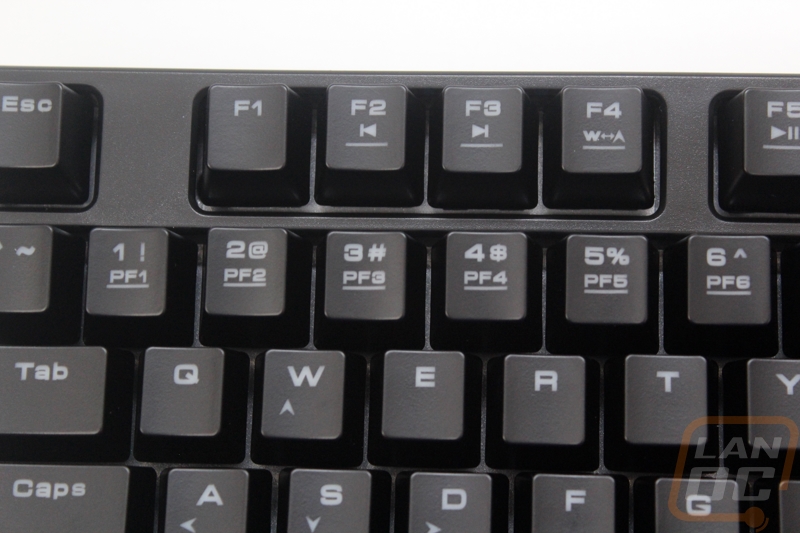 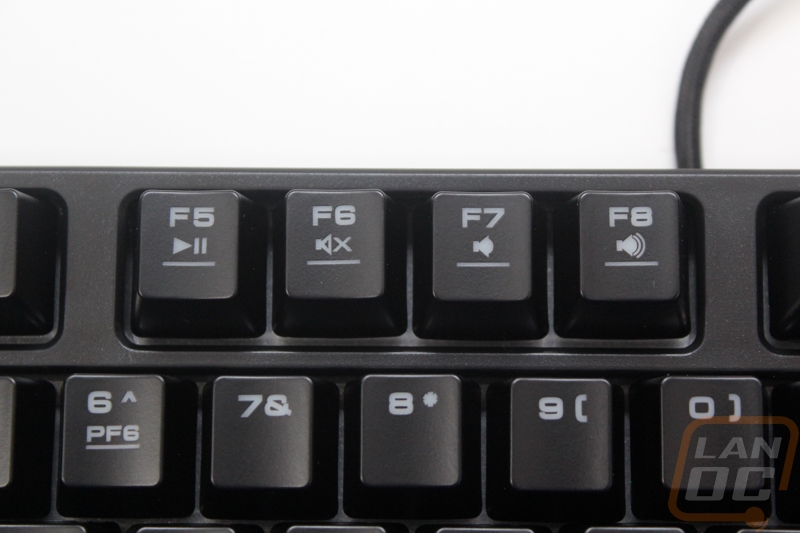 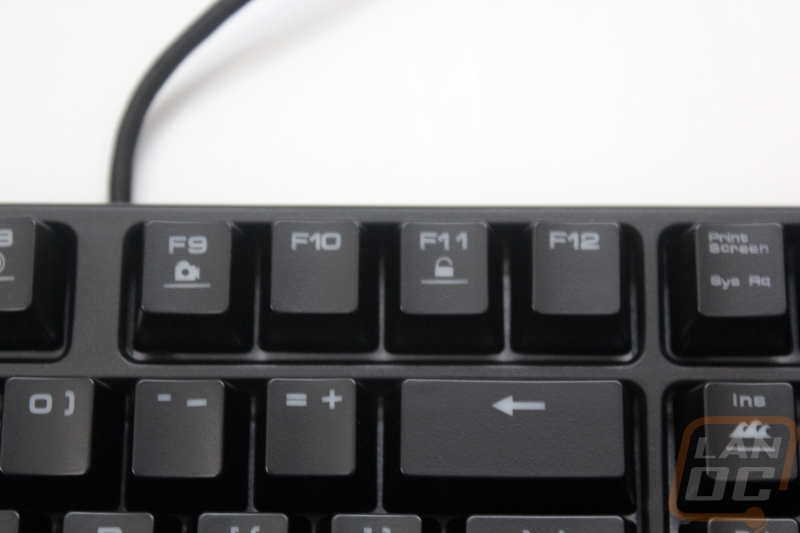 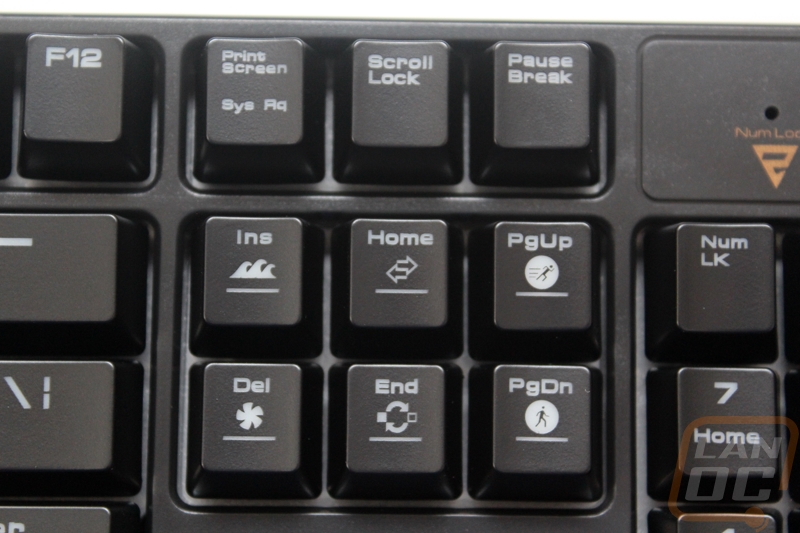 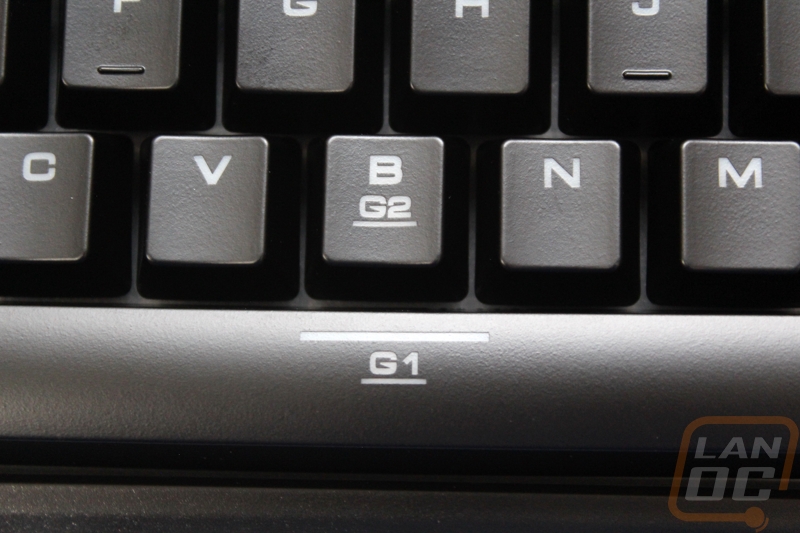 Up above the number pad the LED status indicators are small pinholes similar to the Code keyboard but the large logos under each pinhole kind of defeat the point of the small clean and simple lights. 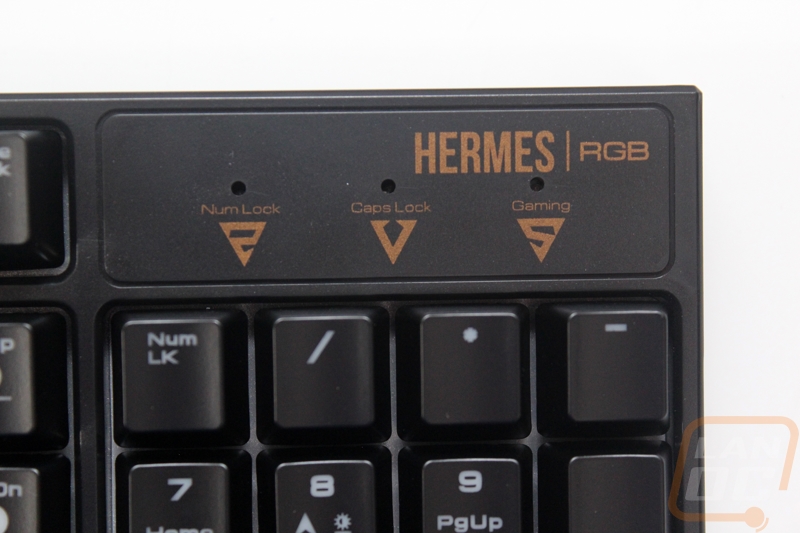 From the side profile we can see the 45-degree angle of the built in number pad as well as the slightly curved profile of the case. Still the keycaps have the standard OEM profile, no shocker there. 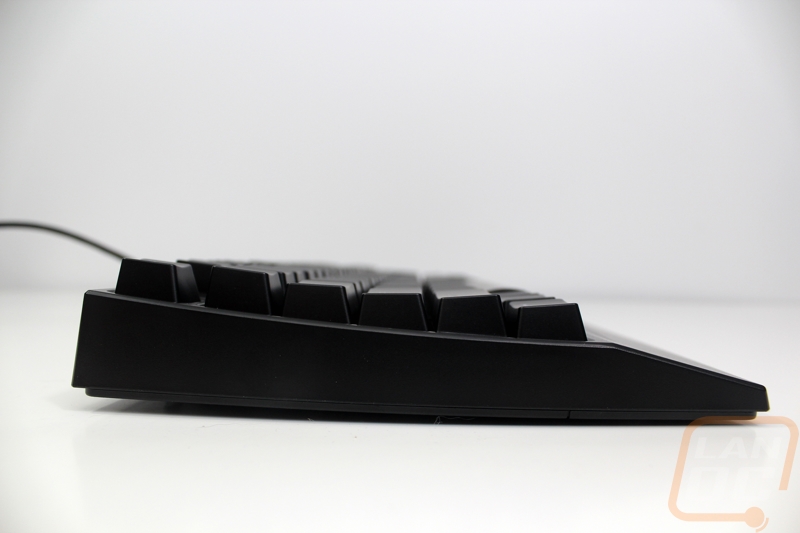 The back of the keyboard doesn’t really have anything going on with the exception of the three holes where the USB cable can be routed out depending on your desk layout. 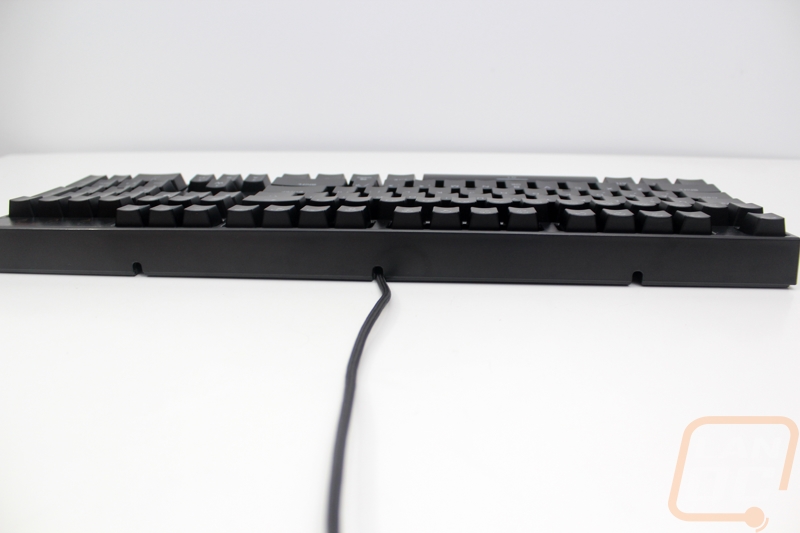 Up under the Hermes RGB the keyboard has a small sticker in the middle with all of the normal certifications and logos. They include the Gamdias branding here as well as the Hermes RGB logo. The large white box on the sticker has your serial number and a barcode for that serial number. For feet the bottom of the Hermes has an impressive four wide rubber feet on the wrist rest. The two flip out feet also have rubber feet on them that work when the feet are flipped out or not to keep everything moving around. Gamers typically push their keyboard around a little more than regular users during the craziness of a game so it is important that it not slide easily. 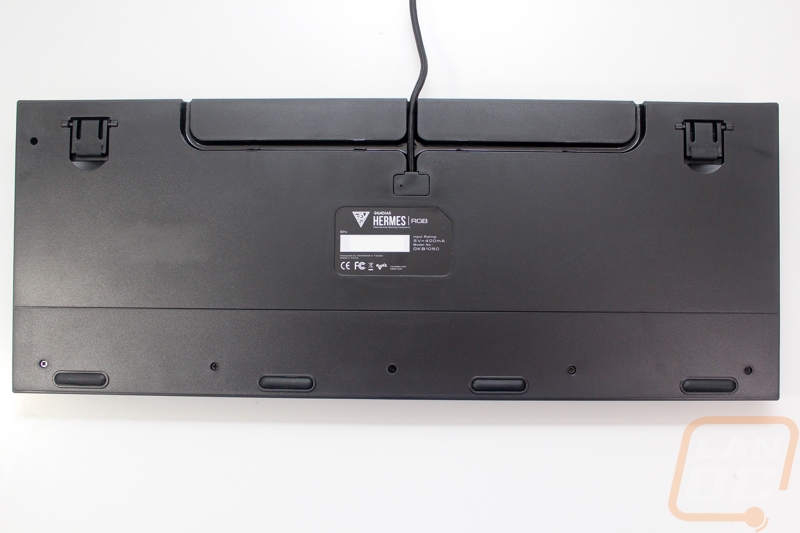 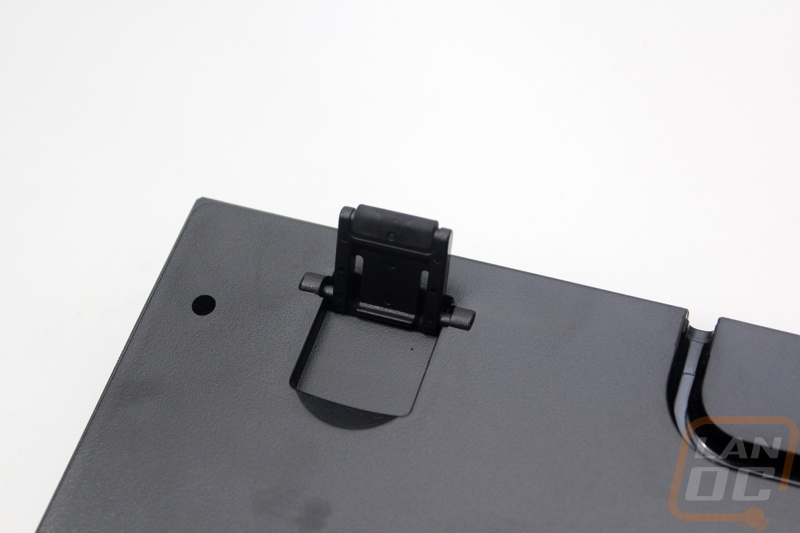 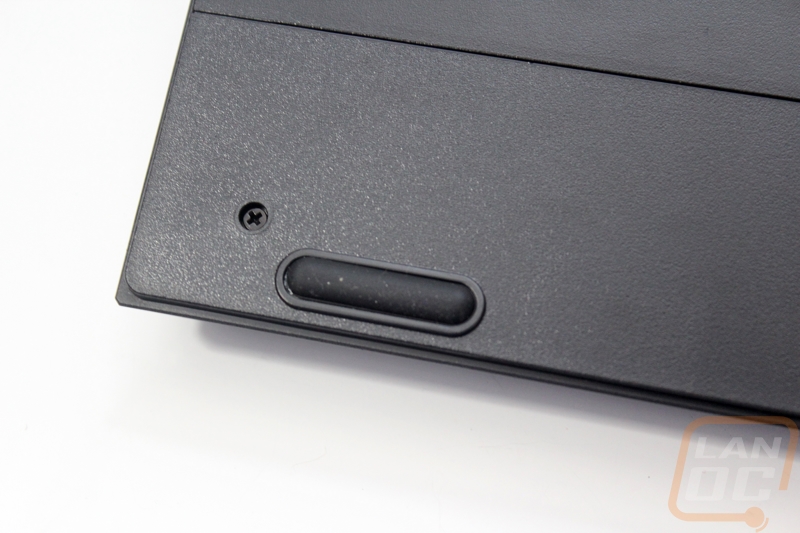 One other thing I noticed when looking under the Hermes RGB was the USB cable is hard wired directly into the bottom of the keyboard. Most companies have been moving to replaceable cords both for an ease of repair and also to allow people to customize their cord to match their style with custom sleeved cables. Gaming keyboards though have been a lot slower to move to this with the exception of Cooler Master, but I would argue those are enthusiast keyboards more than gaming. The cord on the Hermes RGB is sleeve in black and seems to be of good quality. They shipped it with two Velcro straps on it as well to make it easy to pack up for LANs. The connector is a little unique with its curved shape but I really like it. It is thin so there shouldn’t be compatibility issues and the curve makes it easy to grip and easy to spot when looking for your keyboard cable on the back of your PC. 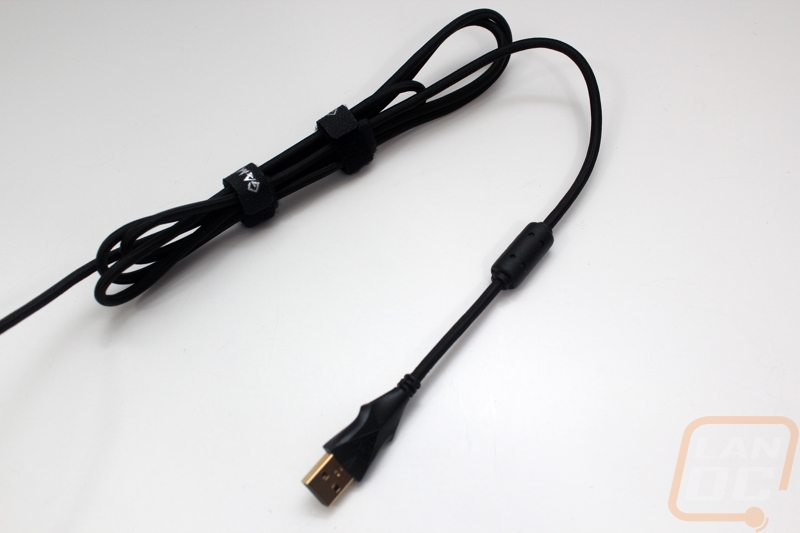 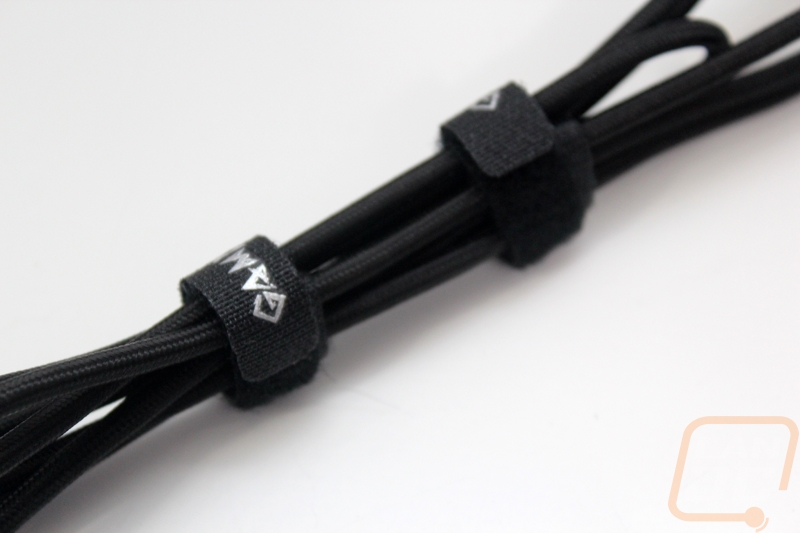 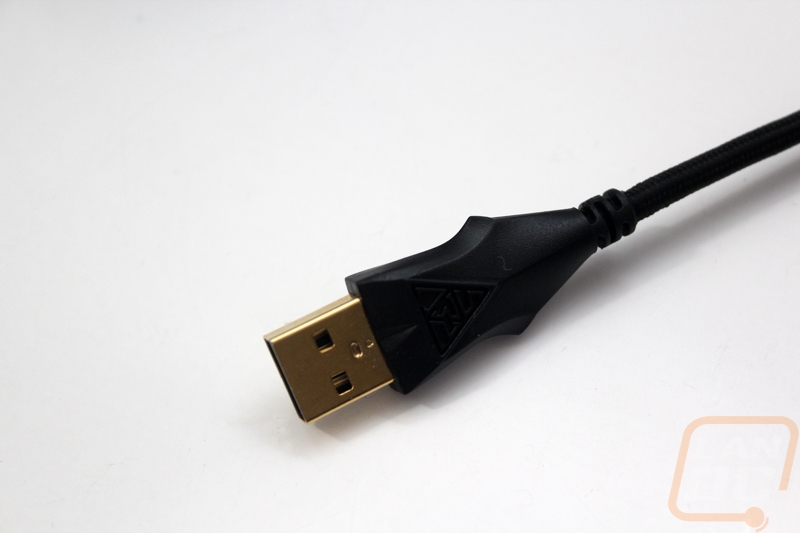 For switches the Hermes RGB has Kailh switches. This is what most would consider a knockoff brand but they have been used in a lot of the RGB keyboards over the last few years with only recently the Cherry RGB switches getting to brands other than Corsair. Kailh switches have the same design as a Cherry MX with the exception of the four LED holes to support RGB. They are known to feel a little more loose than a Cherry switch but the average user most likely won’t notice the difference. The Hermes RGB only comes in blue as well so I hope you like the louder clicky design, personally I prefer browns so it’s a bit of a bummer. For stabilizers on the larger keys they are using a Costar style stabilizer meaning you do have to work with the metal clip and the small clips in the keycap if you take your keycaps off to clean everything up. 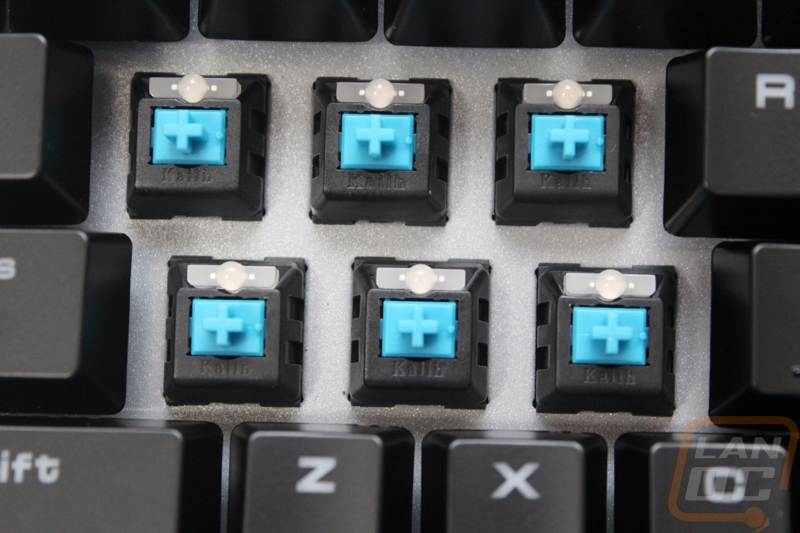 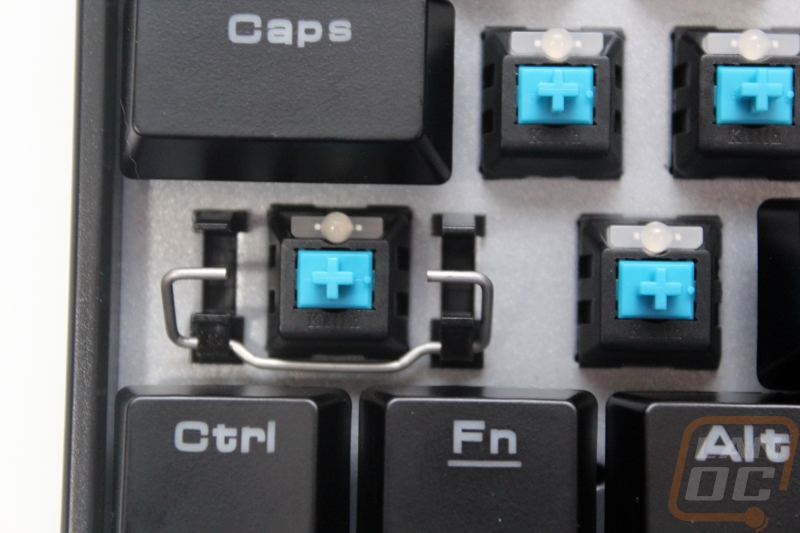 The keycaps are your normal white transparent abs caps with a black finish painted on them. I will say though that the caps are thinner than normal all around with the area around the MX plus being a little concerning. Be careful pulling them off. 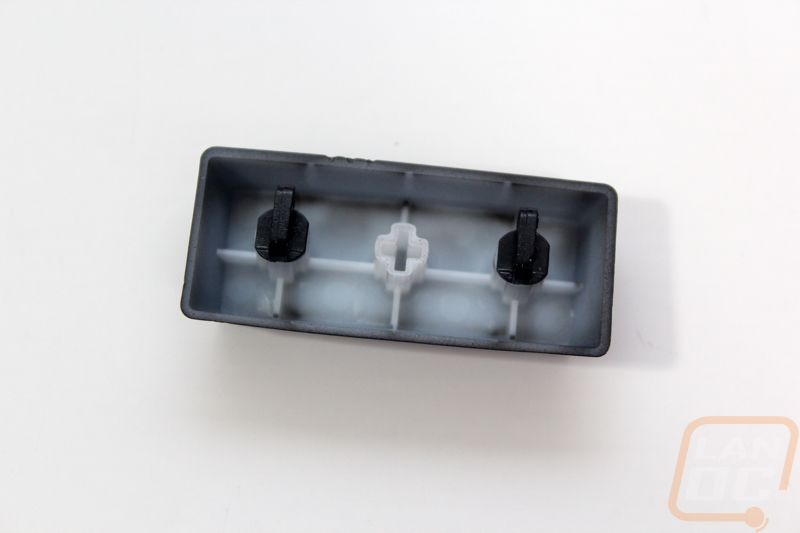 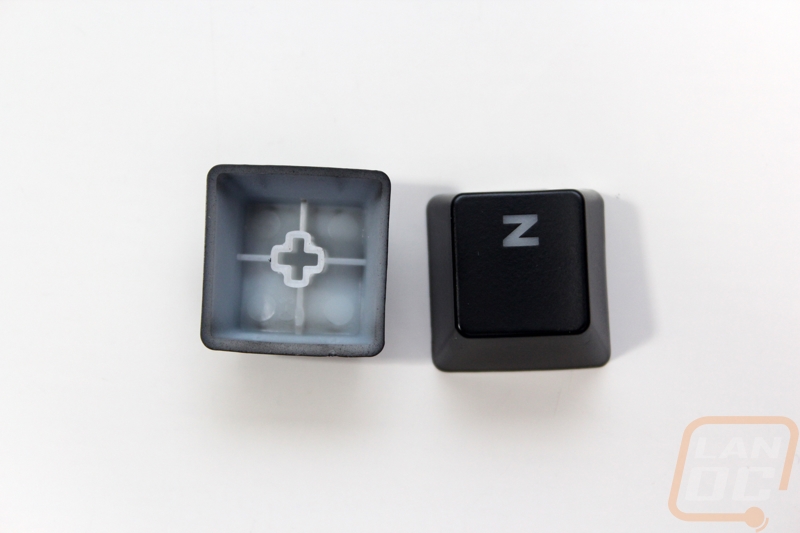