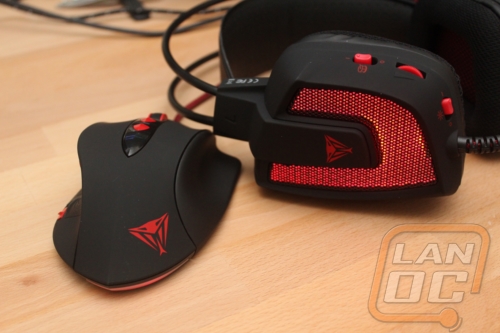 Both the Viper V360 Headset and the V560 Mouse have a heavy black and red theme going on. The mouse does this with a black casing and red on the buttons, scroll wheel, and the USB cord. The V360 mouse has an interesting shape that we can see a little in our overall photos where it is curvy with an odd angular tail. Normally I try to explain what mouse it is shaped like but the V360 doesn’t really fit the mold of the classic mice that I normally compare too. We will have to dig a little farther in to explain its shape. 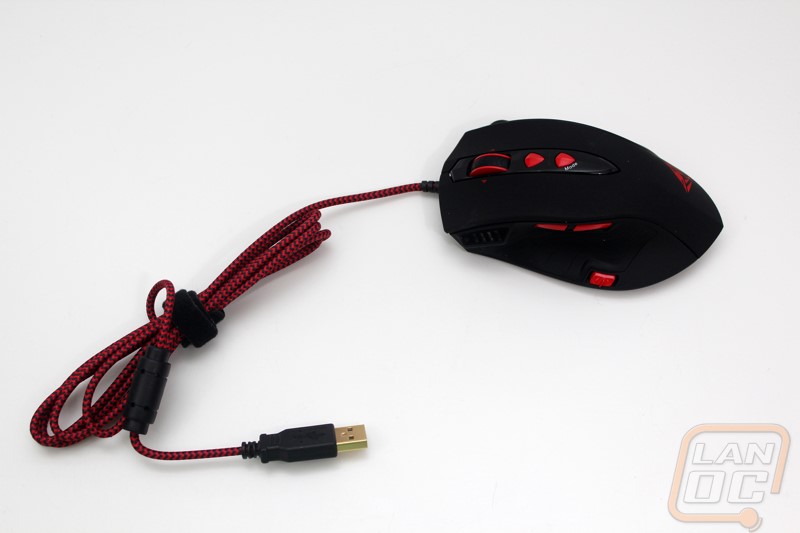 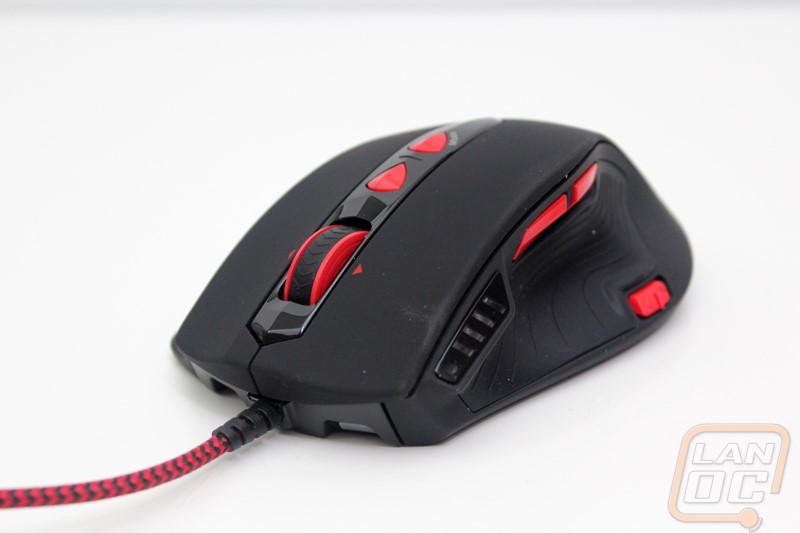 The left side of the V560 has a few things going on. For starters the soft finish that is on the rest of the mouse is replaced with a rubber section here on this side. We have two side buttons up along the top but along the bottom is a switch. The switch is where we can flip through different DPI settings. Most mice just use a button, I’m not sure if a switch will be better or worse but I will find out in testing. Also on the left up at the front is the DPI screen to show you what setting you are on. Over on the right side of the mouse (second picture) there isn’t anything going on. The default side panel has a curved in shape and the smooth finish like the top of the mouse. 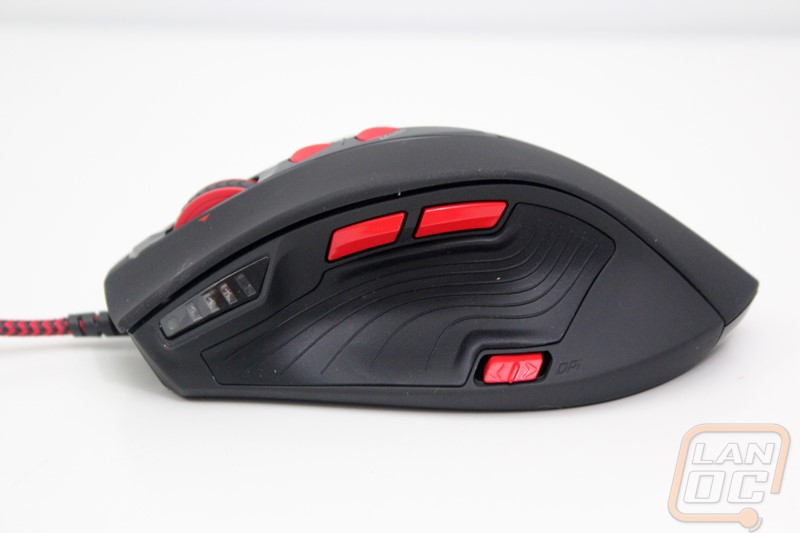 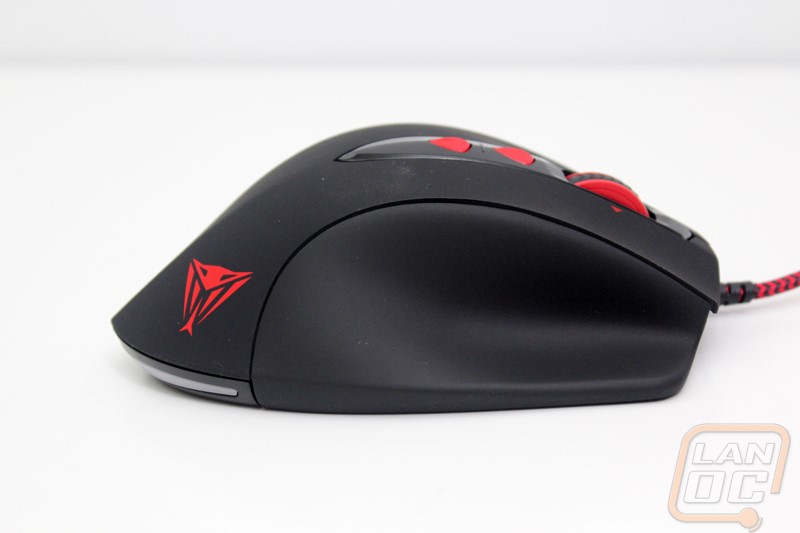 From the top we have a better look at the two profile switching buttons up top as well as the scroll wheel. The scroll wheel is red plastic but it does have a rubber grip on it to help get a little traction. The scroll wheel also does left and right clicks as seen by the arrows on each side of it. 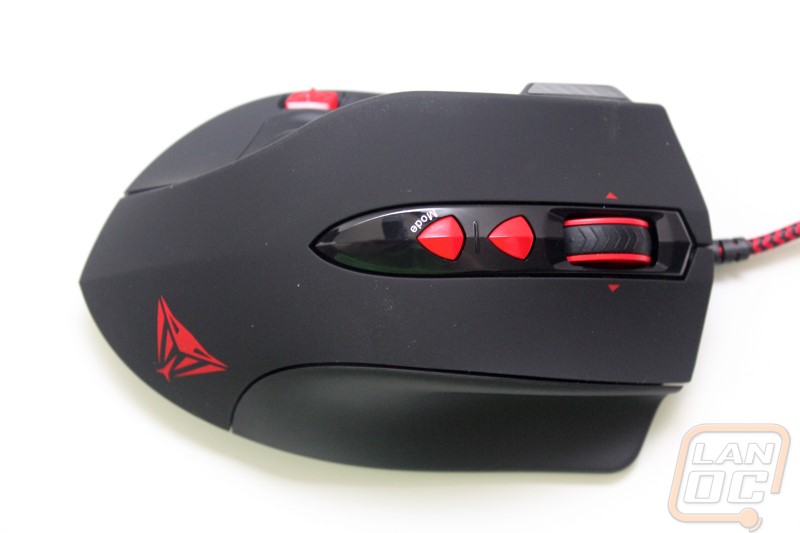 On the bottom there were a few things that stood out. The biggest for me was that the V560 doesn’t use traditional gliders. They replaced the normal Teflon gliders with five rounded ceramic pads. I’m not sure just how well it will work but as someone who hates the gunk that can collect around Teflon gliders due to the adhesive used to attach them I’m happy to see someone trying something new again. Years ago Microsoft used replicable feet that snapped in and looked similar to this, hopefully they work just as well. Bother the gliders there is also the big red button right on the bottom of the mouse. Pushing this unlocks the side panel of the mouse. Then of course we can’t talk about the bottom of a mouse without mentioning the sensor as well. The V560 uses a Avago 9800 Laser sensor and it is located a little off to the right side on the bottom. 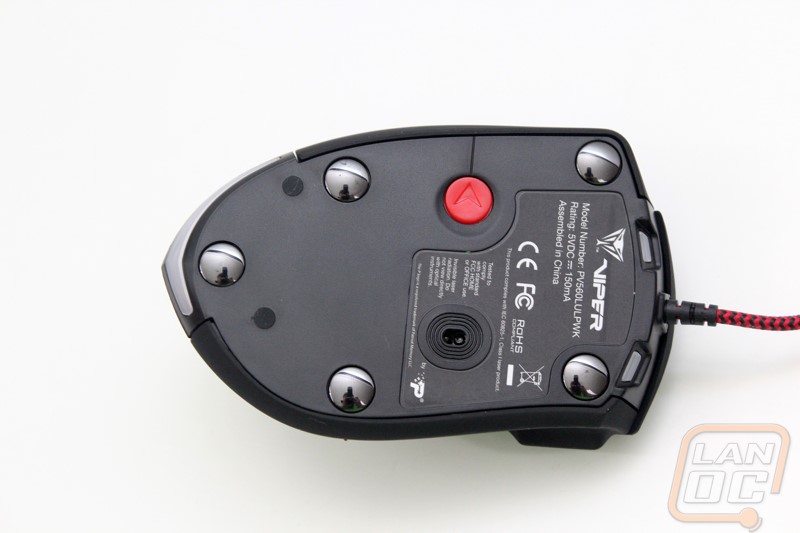 Once we push the big red button on the bottom of the mouse we can pop off the side panel and see what is going on. Basically here we can get access to the weight tray to add or remove weights. In addition, we can actually swap between the two different side panel shapes that Patriot provided. The default shape curves in a lot like the old Logitech G5 did on the side. The second shape is the opposite and has two groves for both your ring and pinky finger. The second shape is a lot like the older Moinix mice. 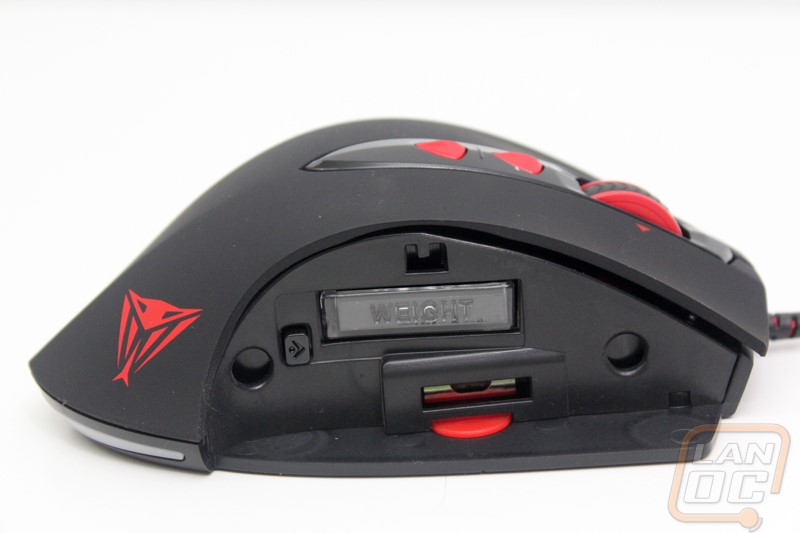 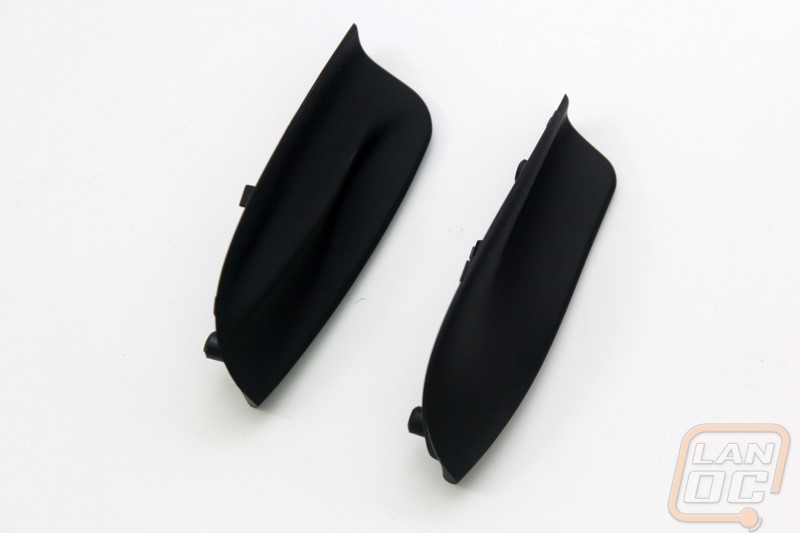 Last but not least there is also the USB cord. The V560’s cord is about 6 feet long and it has a red and black sleeving over it. It is very flexible, more than I’m used too in a mouse cable. They also included a Velcro cord tie to wrap it up with when you aren’t]’t using it or to tie up any extra length. 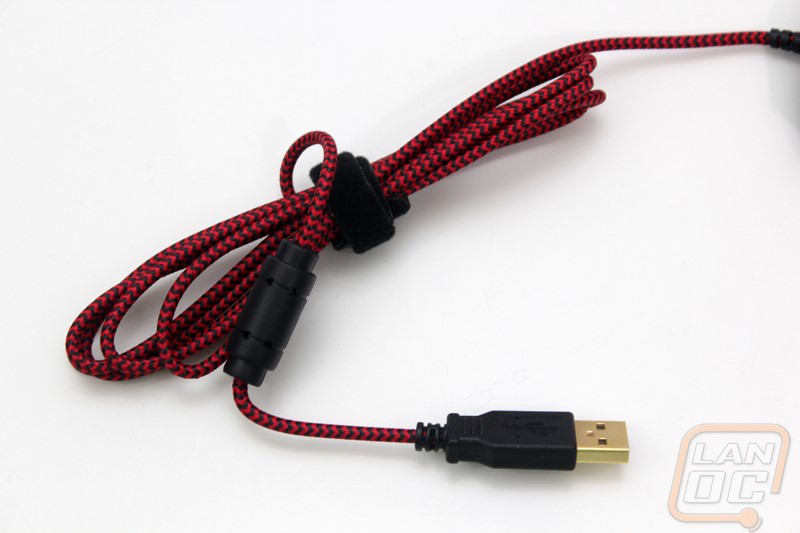 Moving on to the V360 Headset, Patriot stuck with the red and black them. The headset doesn’t have as many red touches as the mouse but there is red inside of the earcups and the red logos on the outside of the earcups. The top band is a suspension design with two rounded bars holding everything together similar to the Siberia v2. The headset is fairly light weight due to the suspension design. 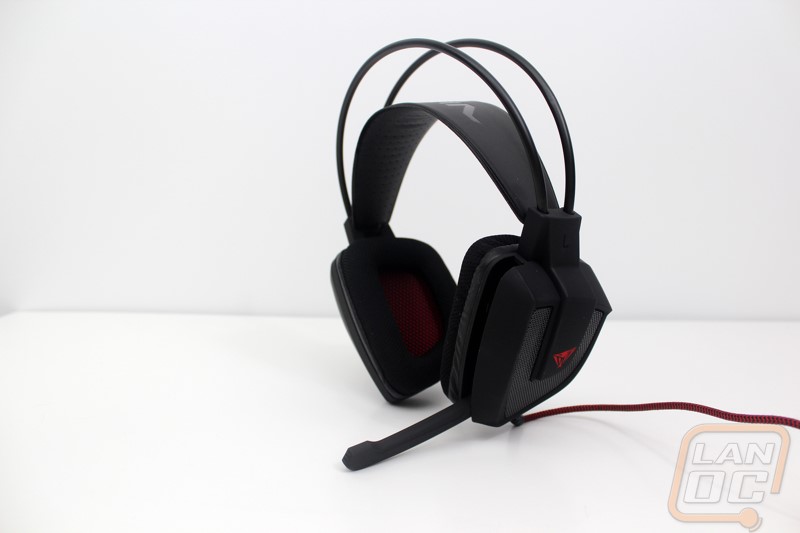 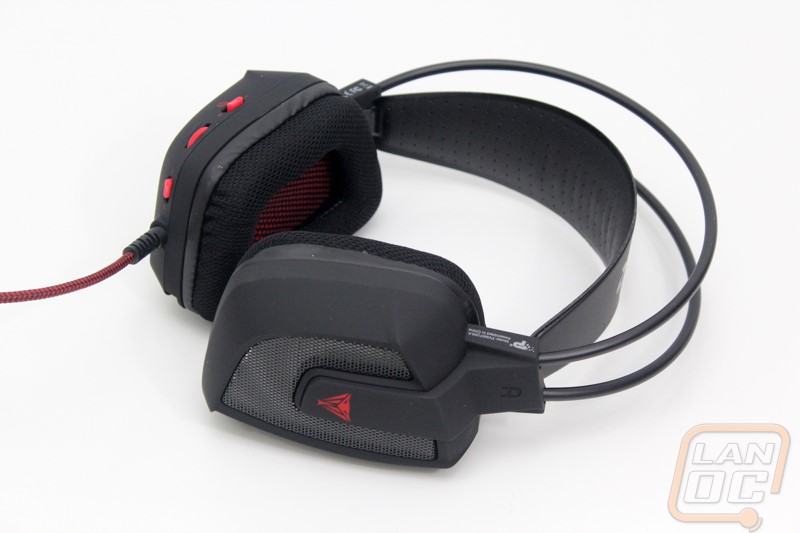 The idea behind a suspension design is that with the suspended band it will form to the shape of your head rather than push on some areas like a normal band. Most headsets with a normal design get around that with additional padding but I’m sure if you have worn your headset for an extended period of time you will have had it pushing on your head painfully. The V360 uses two rounded metal rods to help the headset keep its shape and to push in on the earcups on your ears. This keeps the headset in place. From there the band hooks to the top of the earcups. Patriot did add a little more padding to the band than I have seen in the past as well. 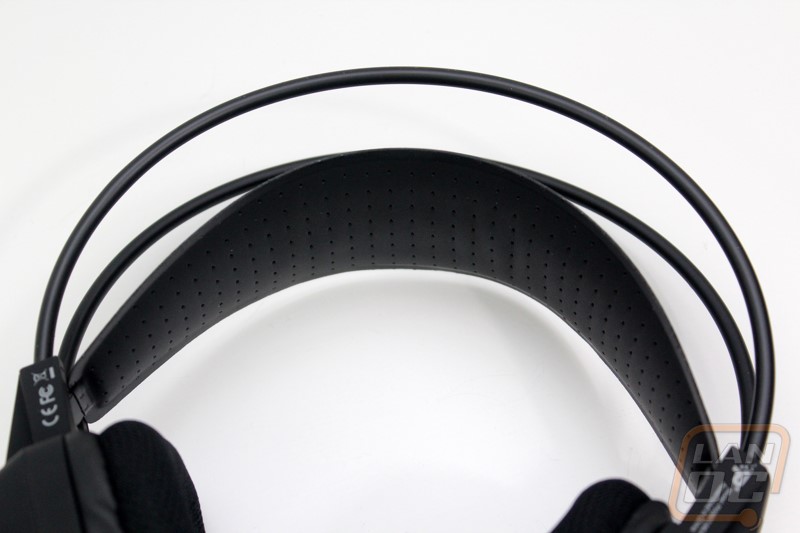 The earcups for the V360 are an over the ear design meaning they should fit around not on your ears. The shape is a little odd with it being a lot like a D shape with the shorter end facing forward. The cup pads are a mesh and now that we are looking closer we can also see that the inside lining that covers the speakers is actually red polka dots. 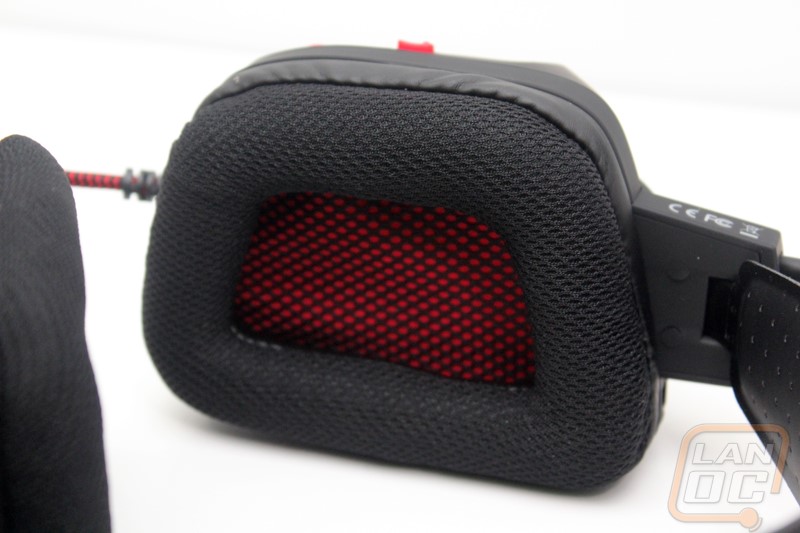 The earcups have a few things going on, mostly over on the left ear. The left ear is where the USB cord comes in and in addition to that it is also where all of the controls are. Like the V560 mouse the controls are all bright red. You have a switch down at the bottom that turns the LED lighting on and off. Then in the middle is a volume knob. Then up top is what they call the UBR switch aka the ultra bass response switch. The controls are basically what you need and they are fitting of the price point of this headset meaning they aren’t of the best quality, but they get the job done. The outside of the earcups has an almost V shaped grill that is backlight red and then of course the Viper logo in the middle. 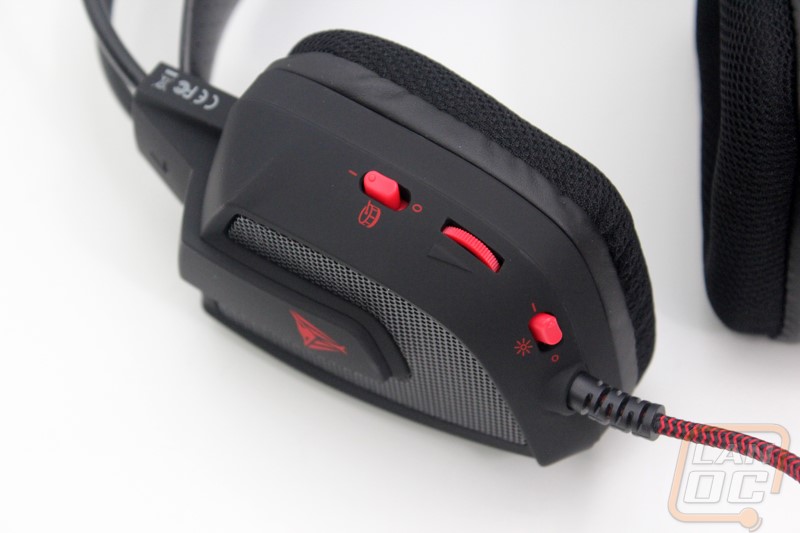 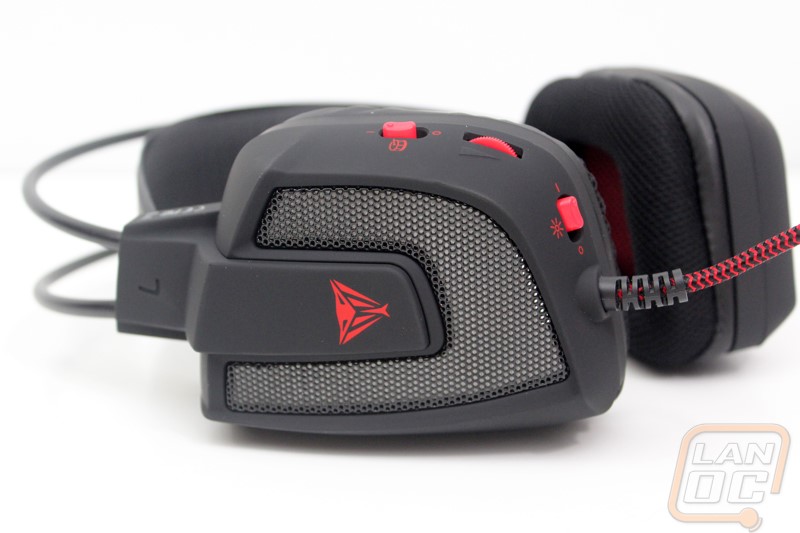 The USB cord for the V360 is almost exactly like the V560 mouse. It is sleeved and has a red and black sleeving but it is a little darker than the cord on the mouse for whatever reason. It comes with a Velcro strap attached so you can rewrap up our cord when needed or wrap up any extra length. Speaking of that you get enough cord to reach the back of your PC so that shouldn’t be an issue as well. 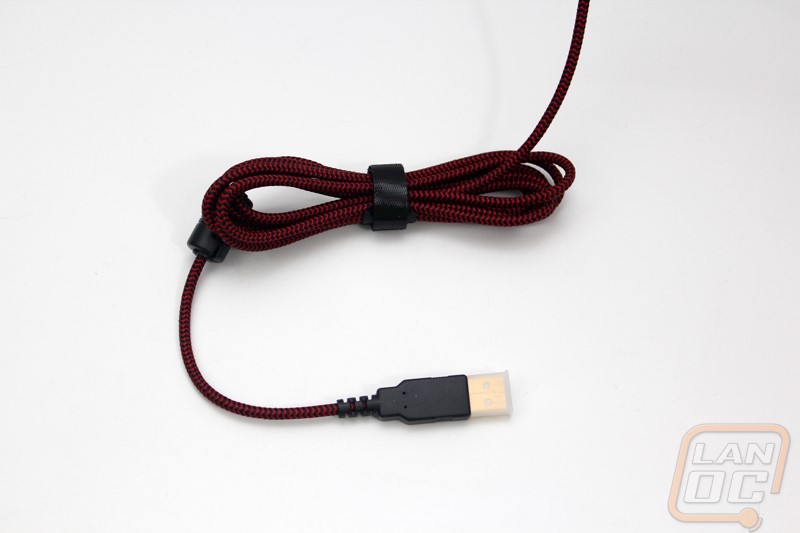 You can’t very well have a headset without the microphone, it would just be a pair of headphones at that point. The V360 has a flip down design that is completely made of plastic. That means the boom flips down but doesn’t have any adjustment to get closer or farther away from your mouth. 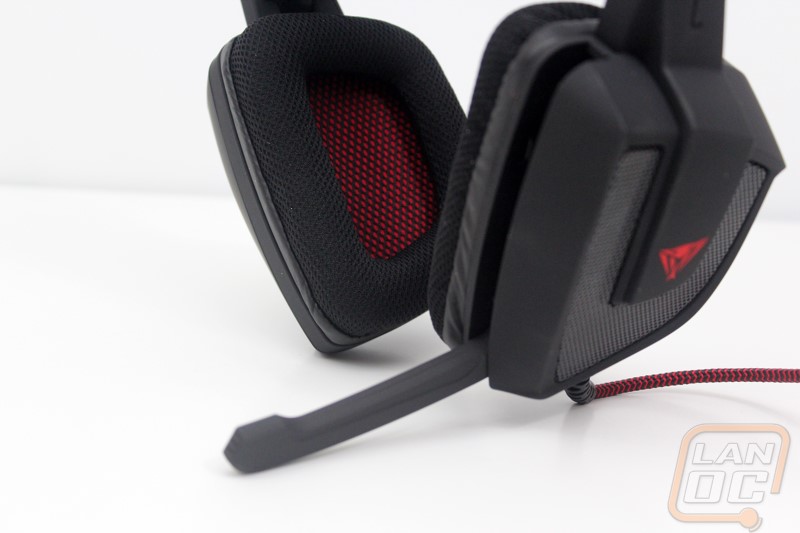