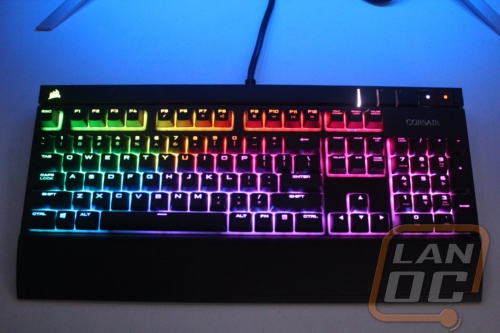 So the Strafe shares a good portion of the styling that people loved about Corsairs K series of boards. You get the same flat and clean look. The bezels on the sides are thin as well as in between the number pad, direction pad, and main keyboard to keep the board from being unnecessarily wide. The bottom bezel is of normal size but up top they did take up more room than normal and frankly more than needed given the lack of dedicated media keys like the K series boards had. The other big chance is the Strafe drops the solid aluminum design for an all plastic design. They don’t look much different and the Strafe does feel solid in hand though. Without the one piece aluminum design the Strafe does have a bit of an edge around the keys, so cleaning will be a little more difficult than the K series, but it is still less than you see on most boards.  The Strafe comes with a detachable wrist rest that has a slightly textured and rubber finish on it as well. 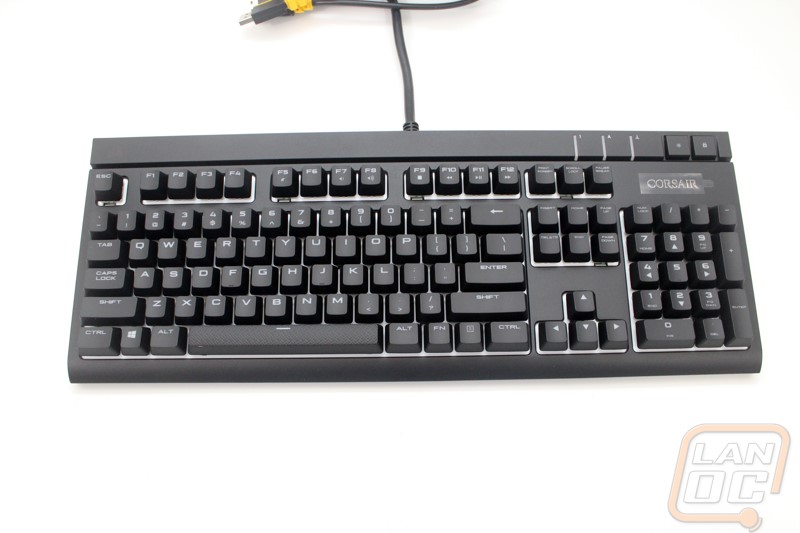 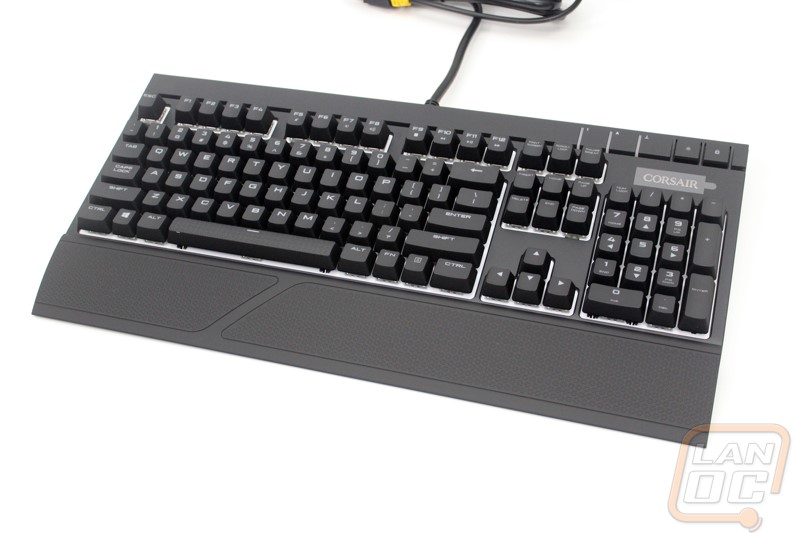 Most of the key layout is standard on the Strafe with the exception of the bottom row. They went with a longer space bar and larger control keys at the cost of a smaller windows key, menu key, and function key. It also means if you want to replace or need to replace the keycaps on your Strafe later you are going to have a very hard time finding a set that will fit. For legends they went with the same font that have been using for a while now. It’s not too bad but still a little like the older gamey font that a lot of people hated on the Cooler Master boards. Considering the otherwise clean look I would have thought Corsair would keep it simple with a more traditional font. They also have large legends on a lot of keys but keys like the number lock, print screen, delete, and the others look out of place with how small the font ends up being because of the wider font they use. 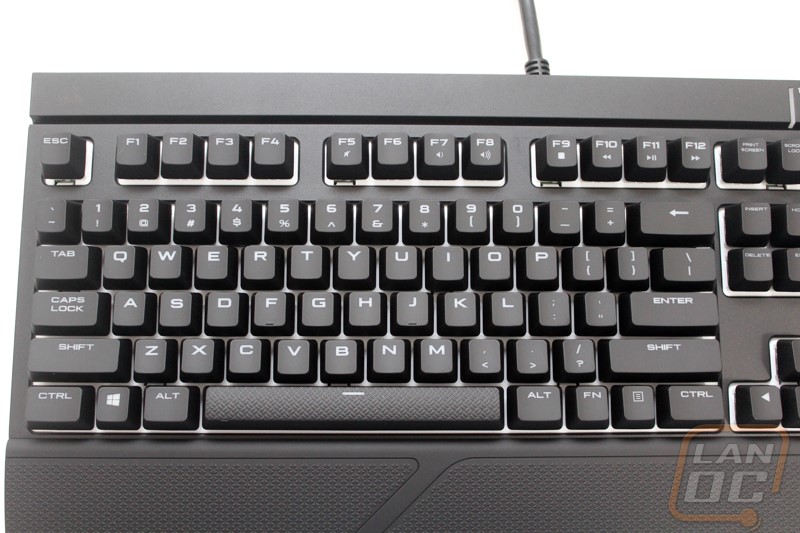 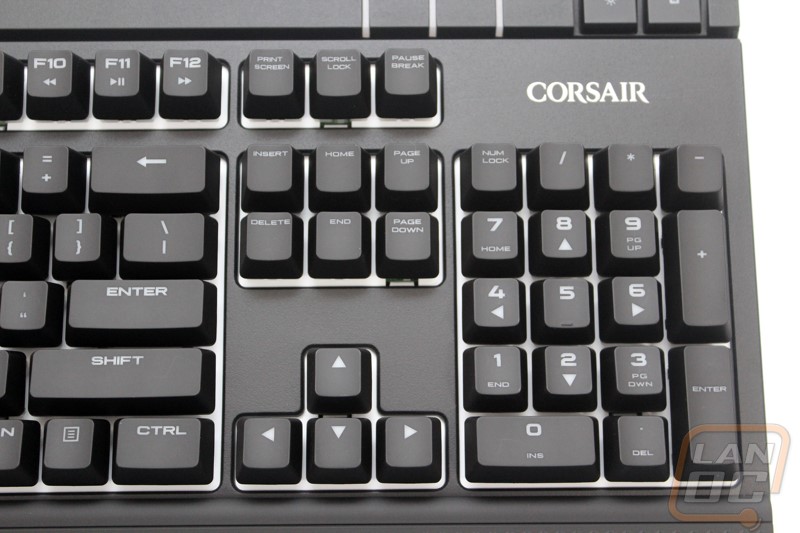 Like I said earlier they did drop the dedicated media and volume controls like the K70 had but they did slip in media controls up into the F keys with the use of the function key. You get play, pause, stop, forward, back, mute, volume up, and volume down. 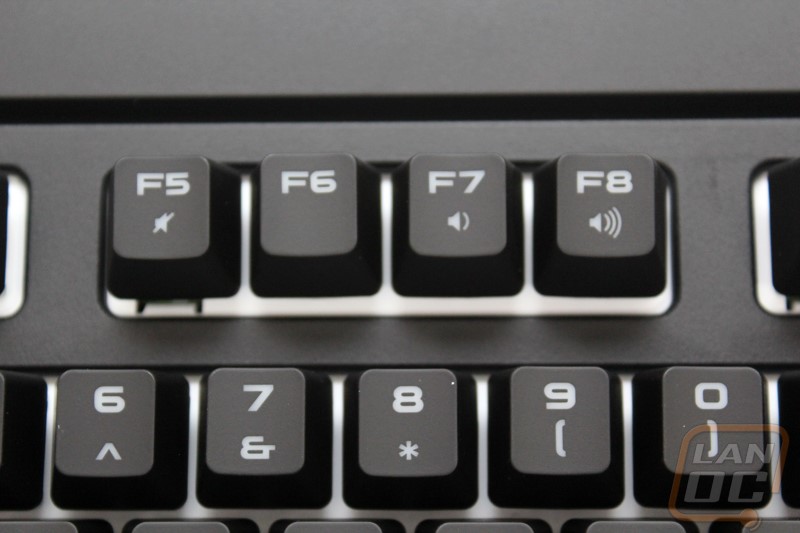 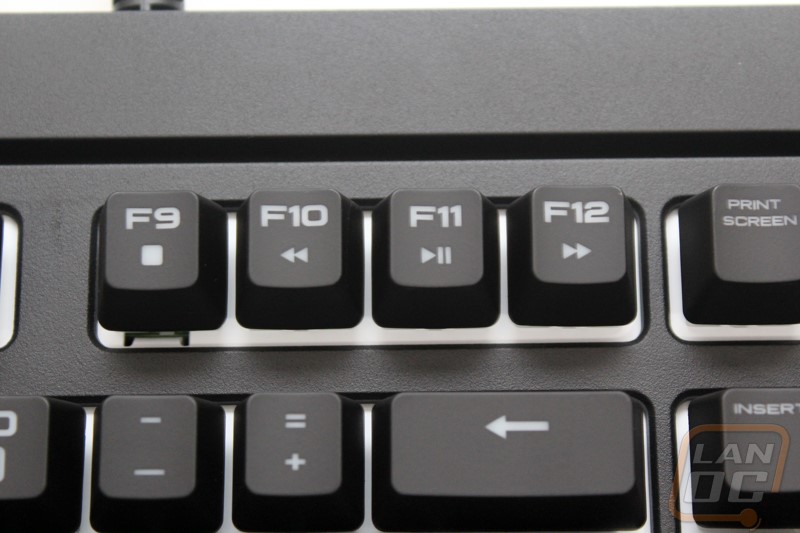 Up in the top right corner where the volume control used to be on the K70 corsair has still slipped in two buttons. One lets us flip through the brightness levels on the RGB lighting and the other locks out the windows key for those who are worried about bumping it in game. Maybe it’s the games that I play but I never seen to have to worry about accidently bumping it, but it’s nice to know the option is there. To the left of the two buttons are the standard three LED indicators as well. Corsair really made each big with nearly an inch-tall indicator. This is where you can see your caps lock, number lock, and scroll lock indicators. 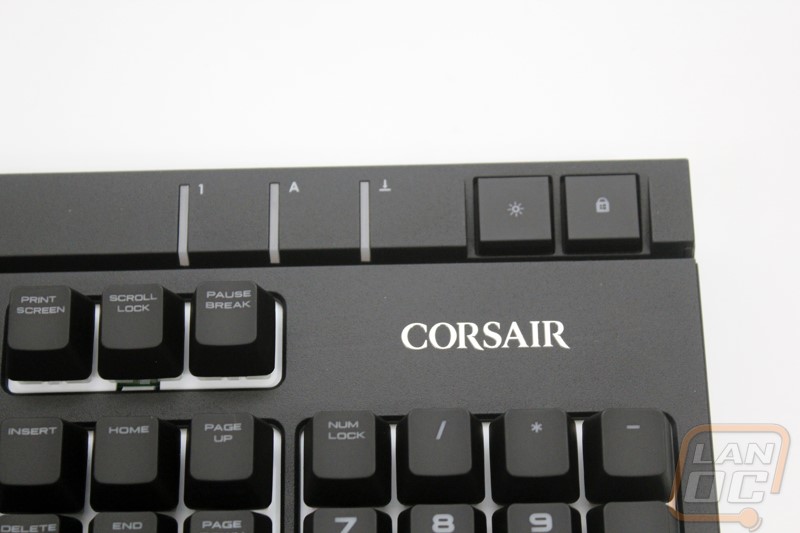 The plastic on top extends all through the Strafe. On the side they did at least change the finish from black to silver. From the side profile we can also see that the whole keyboard has an angled profile by default. The top panel is also separated from the rest of the keyboard with a small gap that runs from front to back. Beyond that really the only thing you will find around the outside edge of the Strafe is around back where the USB cable runs in and they have added a USB 2.0 pass-through port. 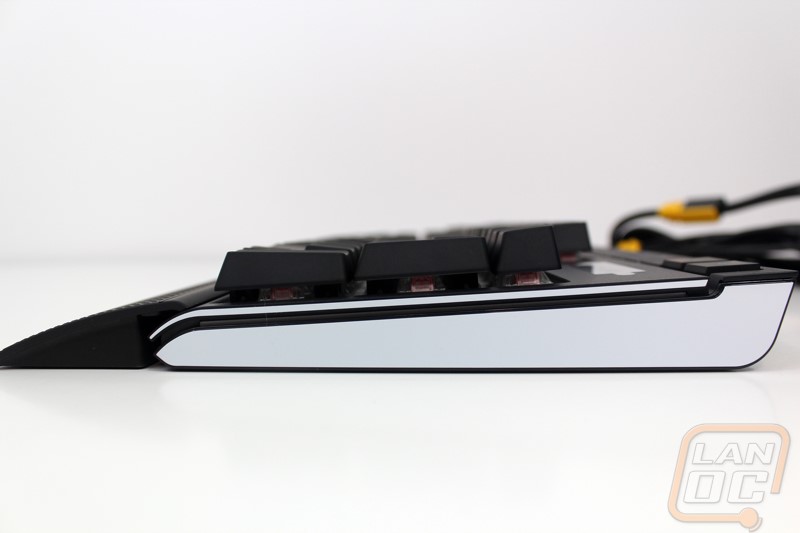 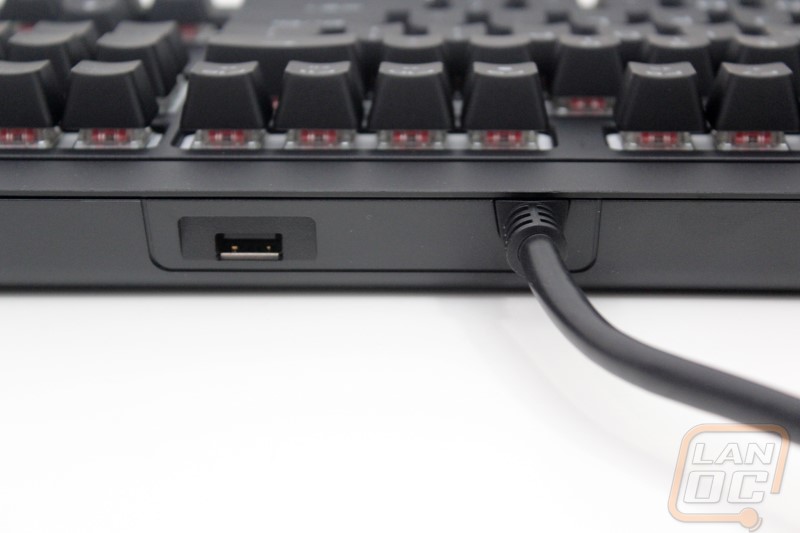 With the board flipped over we can see that in the middle Corsair included the normal sticker with our serial number and all of the required logos for standards and tests like CE. The bottom of the Strafe is mostly simple with four inch wide and very thin rubber feet, one in each corner. There are angled flip out feet as well to angle the keyboard up even more if you need it. The extra feet do not have rubber on their ends though. Considering how small the feet already are on the Strafe I’m concerned that it might slide around, especially if you angle it up. They did include a few more rubber feel on the attachable wrist rest so that is good, hopefully it’s enough. 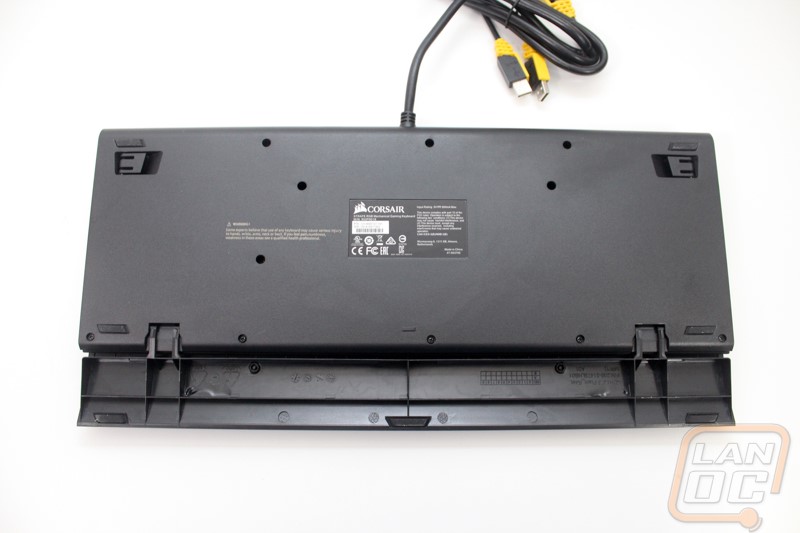 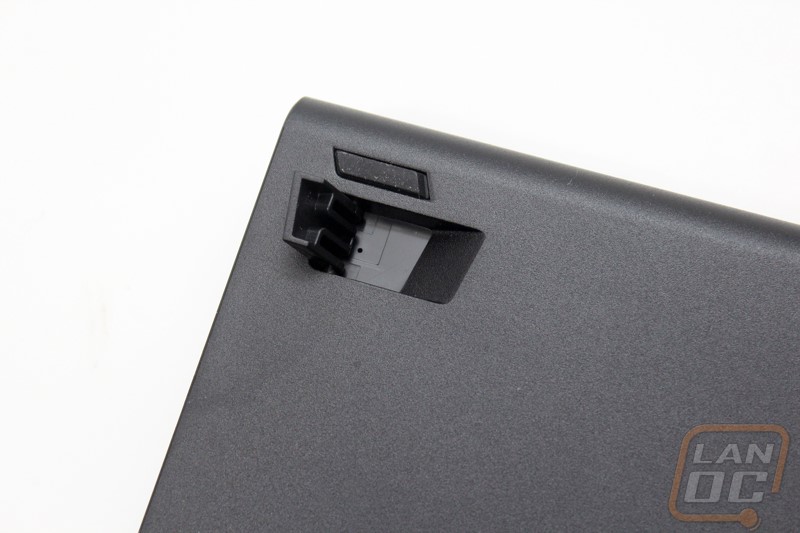 Even with all of the changes Corsair went with going from the K70 to the Strafe it’s the key switches on this specific model that are going to get the most attention. That is because they are a completely new keyswitch compared to all of the other Cherry MX switches on the market. They have been working with Cherry over the past few years and have gotten exclusivity contracts first with the RGB switches when they were first introduced and now with the MX Silent. Officially Cherry introduced the MX Silent with two different models a red and a black but from what I can tell Corsair is only using the one model, the red. The new switch is linier in action just like the original MX Red but the new design uses a double shot process on the slide to integrate a rubbery thermoplastic elastomer. This will hopefully soften the impact when you bottom out the switch. It has the same 45cN activation force that the MX rad has as well as its 3.7mm travel distance and 50 million actuation rating. Basically it is business as normal with the exception of the rubber dampener built in. This isn’t completely unique as enthusiasts have been finding different ways to cut out the noise of bottoming out a switch for a while now, but this is the first switch specifically designed to do it. 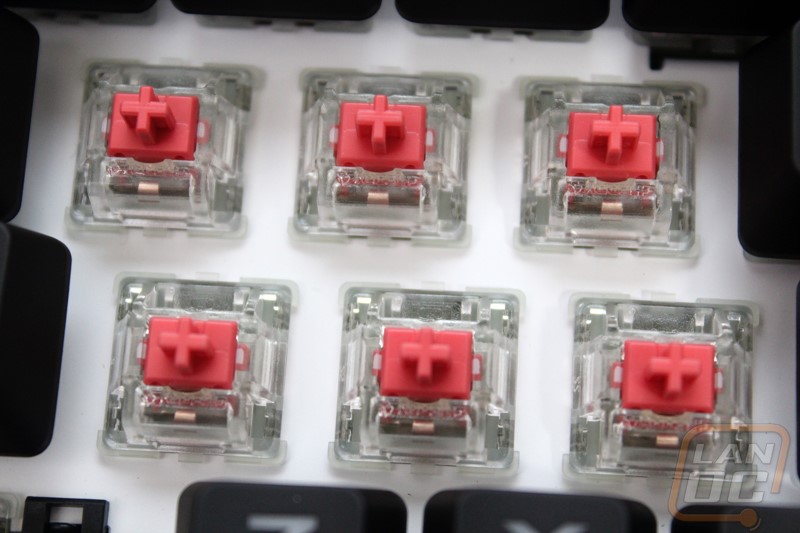 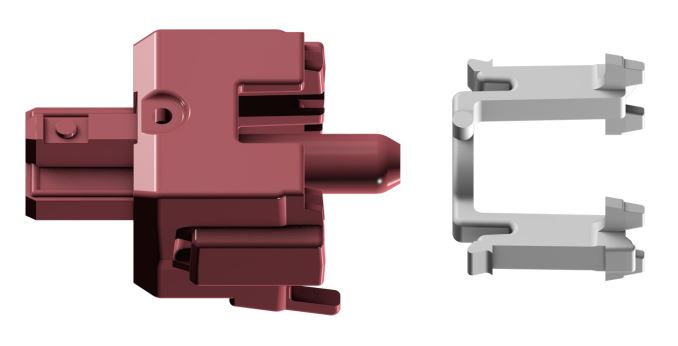 For stabilizers Corsair kept things simple with Cherry stabilizers. Cherry stabilizers use a bar that is between the PCB and the backplate to keep things stable. This design is known to be a little noisier and sometimes mushy but it makes taking your keycaps off to clean MUCH easier because you don’t have to fight with reinstalling the small bar. 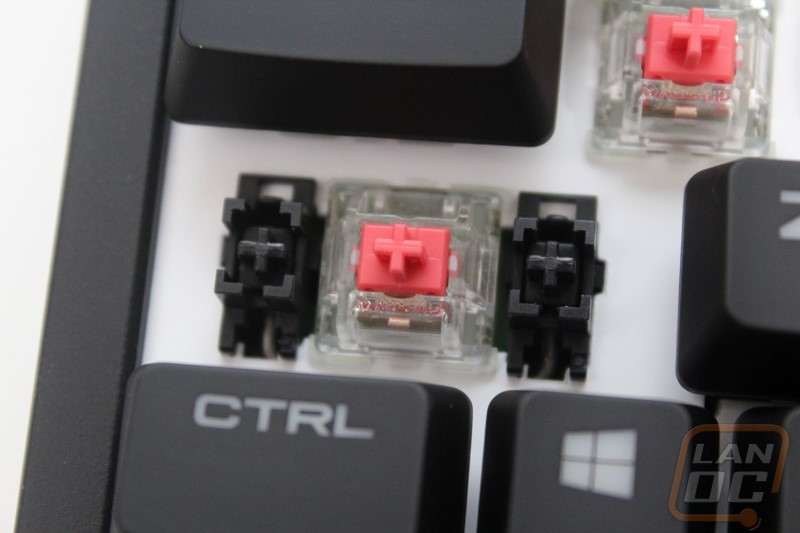 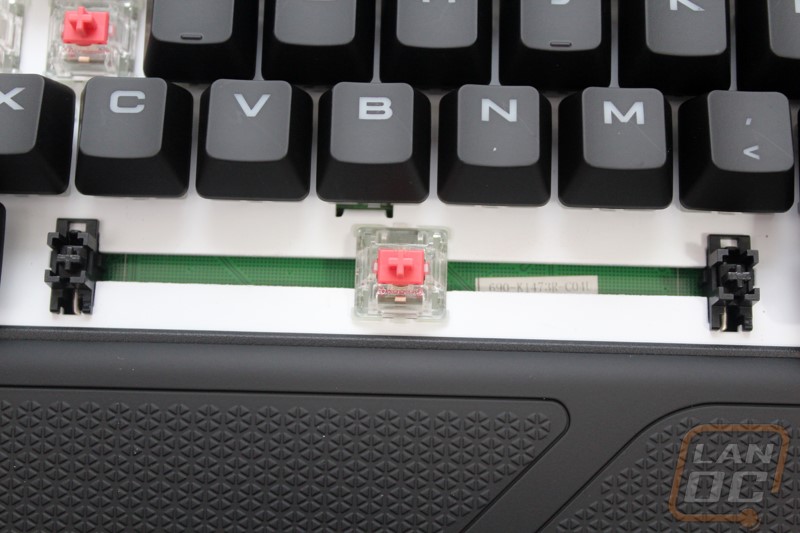 Corsair went with an OEM profile for the keycaps meaning the top two rows angle down, the third row is flat, and the other three rows angle up. 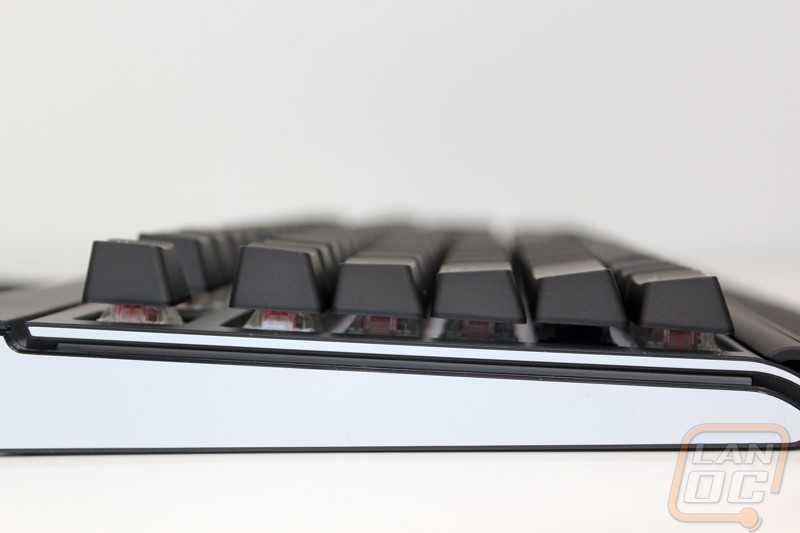 I mentioned earlier that I think the font that Corsair used on the legends is a little wide and weird so I don’t need to get into that too much. Beyond that the keycaps on the Strafe are your standard transparent white ABS and have been painted black and then etched for the legends. They are thin and basic caps just like every other backlit keyboard on the market. That means be careful pulling them off and don’t be surprised when the ABS plastic starts to wear smooth on the top of your most used keys as well. The spacebar is a little interesting though. It is white abs like the others but rather than paint it has an interesting textured finish that is similar to the rubber on the gaming keys below. 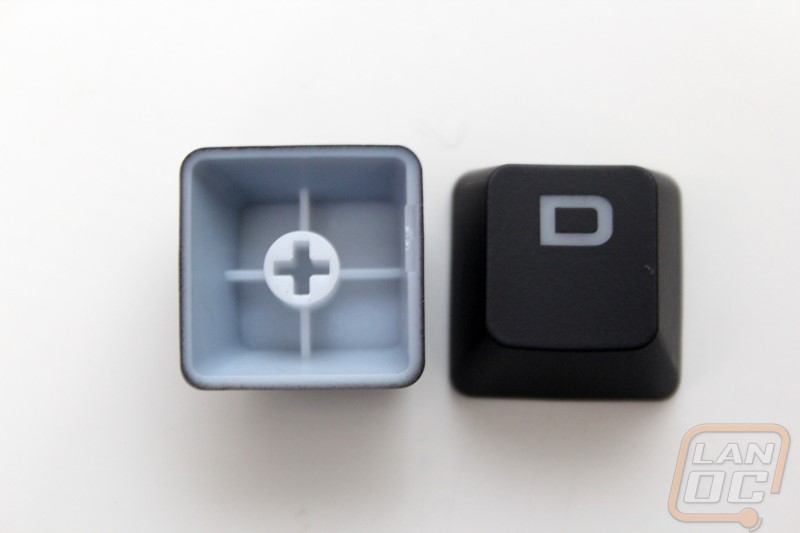 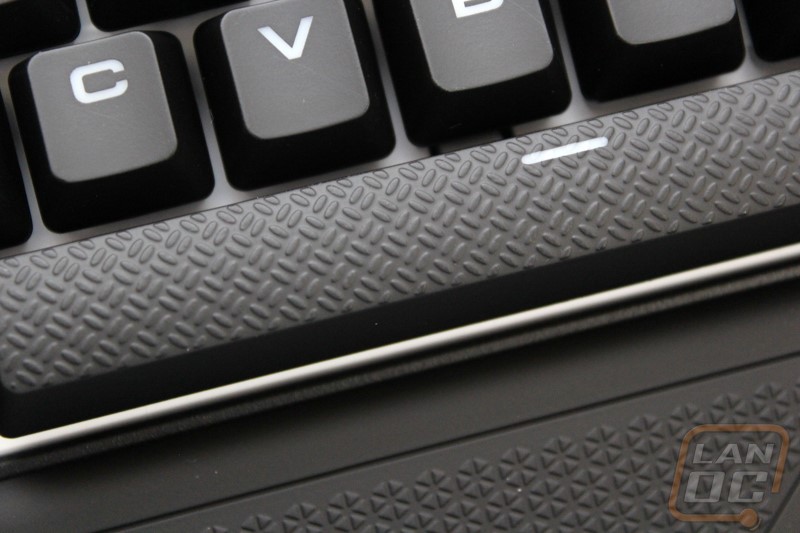 Other than the RGB backlighting there aren’t a lot of features on the Strafe that scream IM A GAMING KEYBOARD. That’s actually part of the secret to Corsair keyboards, they seem to walk the line between the typical “gaming” keyboard and enthusiast keyboards. Corsair has included rubber coated gaming keys with most of their boards and the Strafe is no different. They included a shrunk wrapped pack of keycaps along with a plastic keycap puller. What is different than most boards though is they didn’t just focus on the standard WASD and call it a day. They also included QWER and DF for MOBAs with special attention to LoL with the D and F. Both sets have the rubber finish on top and are grey. Backlighting still works with them as well. Each set has angled specific keys to try to make them easier to reach. For the WASD set W angled down and A and D angle in to the center. The QWER have Q and R angling in. You will notice that W and D are doubles here because they are included in both sets, because the angles are different you do need to be careful you have the correct key. 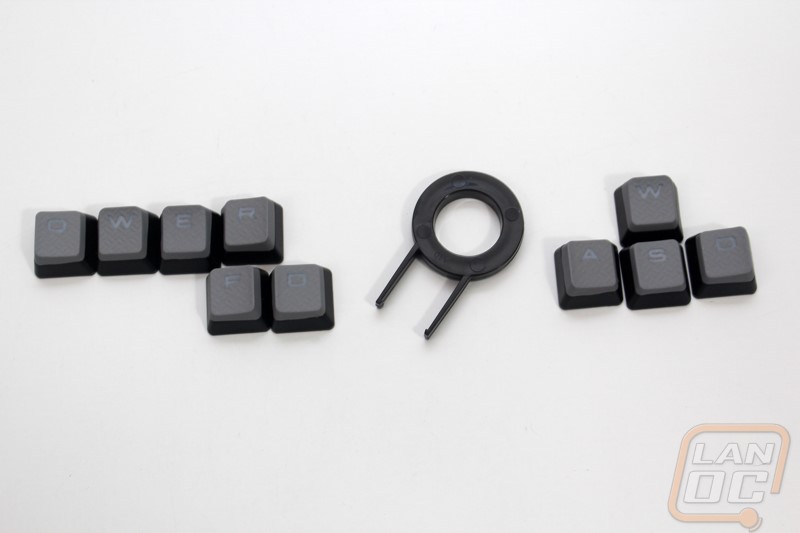 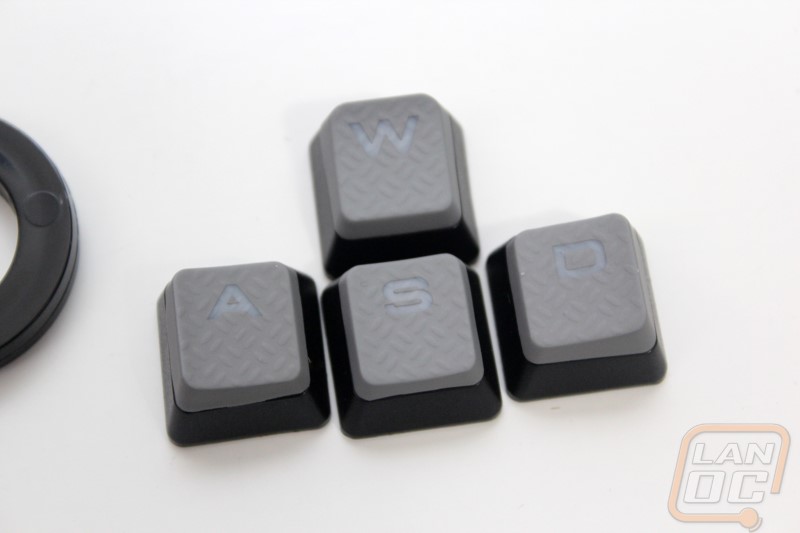 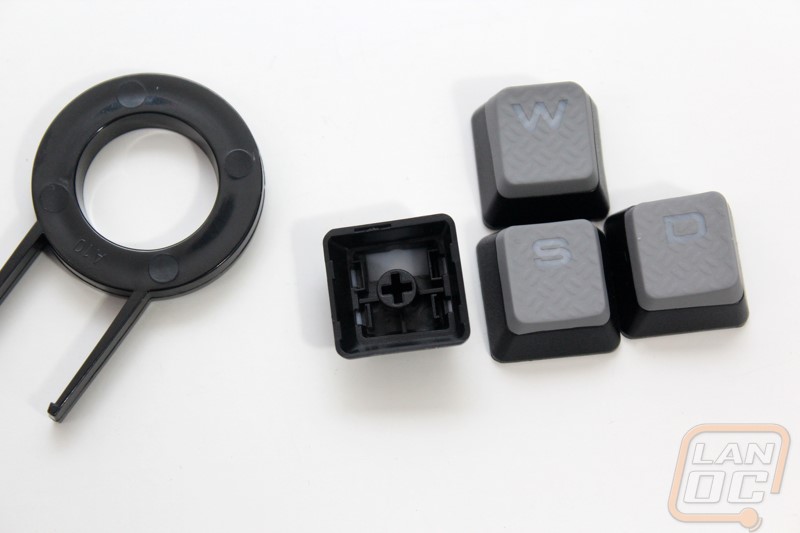 Last but not least, the cord for the Strafe RGB is a thick rubber design that splits into two USB connections. The plugs have a unique yellow design so they should be easy to spot around on the back of your PC. One handles keyboard duties and the other is the passthrough cord for the USB port on the back of the Strafe. 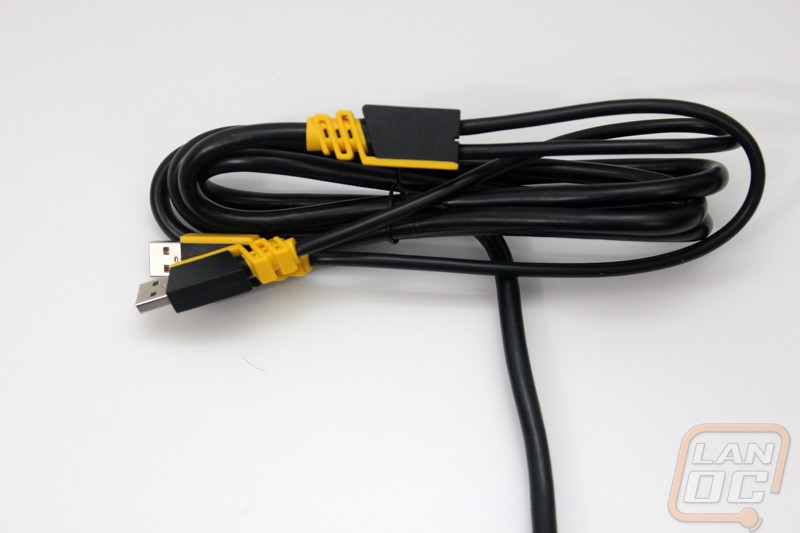 garfi3ld replied the topic: #37583 23 Jan 2016 14:20
Well a day later than I had originally planned but today I check out the Corsair Strafe with the new Cherry MX Silent switches. If you do nothing else you should at least see the different in the video on the performance page. Have a good weekend everyone!
Read More...

We have 1557 guests and one member online