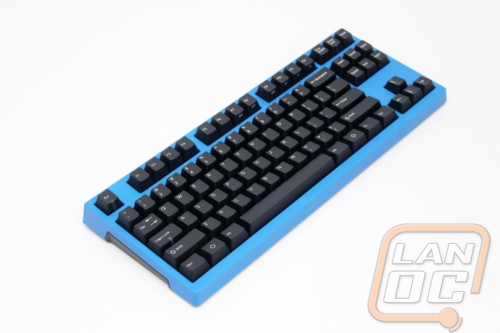 For testing I’ve used the ES-87 off and on for a while on top of use at LAN events. Much like the Cooler Master Rapid and the Code keyboard the ES-87 keeps things extremely simple. There isn’t software to mess around with. They went with a few dip switches on the bottom for the limited amount of customization that Kul felt the keyboard needed. As someone who would prefer to avoid having to install software just to set up one or two things this was a welcome addition right out of the box. The ES-87 is KUL’s only model available right now and it is a TKL model so if you are looking for a number pad you are out of luck. Personally I use a full sized keyboard most of the time in the office simply because inputting things into excel for graphs can be a major pain without it, but any other time I’m happier with a smaller keyboard.

So how does the ES-87 type? Well KUL has done a great job of giving a wide variety of keyswitches for the ES-87. Your experience is going to be different in every one of the situations. On our Cherry Clears I had a great typing experience. The heavy duty feel that you get when you pick up the ES-87 helps give the keyboard an extremely solid feel when typing on it. It’s not going to slide around on you and you aren’t going to have rattles and noises. When I tested the Code keyboard, that I still use to this day, while it was a solid board I found that the case felt cheap and it flexed and made noise. In addition to that the costar stabilizers on it rattled. The ES-87 has a thick backplate and a thick casing so it was a completely different story. The decision to go with Cherry stabilizers isn’t going to be everyone’s favorite, but I found them to be quester and just as smooth as the Code.

The ES-87 did come with the built in media keys and I gave them a try a few times but as usual I find it easier to use my mouse to control my media compared to media controls that are on a function layer. I’m not saying that the ES-87 needs to add dedicated controls like some keyboards because I think it would take away from the clean styling, but I would bet most people won’t end up using what is built in. They might be able to make it easier by moving them down near the function button for one handed use like the Code keyboard though.

The ABS keycaps that came with the ES-87 did the job and were a step above what most keyboards come with these days but I do think there was still an opening for KUL to finish what they started. The rest of the ES-87 is over the top when it comes to quality and even though they are good they aren’t at the same level as the keyboard. A nice set of thick PBT caps would really top things off, but then again also push the price a little higher.