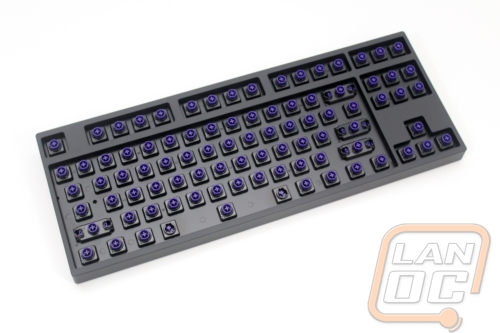 So after testing the Novatouch on and off for over a year we can finally put to rest any doubts I might have had in my first Novatouch review. Cooler Master put together a great keyboard. They took the same clean styling that I love about their Quickfire keyboards and packed a Topre keyboard inside. Typing on a Topre keyboard takes the best from a mechanical keyboard with more smoothness making it a pleasure to type on. I do feel that the Novatouch makes a little more noise than is needed, specifically when letting go of the keyboard and a little with the stabilizers. This is still much better than the lower end Topre keyboards but is still slightly off from the really expensive boards. It makes up for this with the MX compatible stems though that let us run an aftermarket keyset on the Novatouch. You can have custom sets made or if you want you can find a higher end PBT keycap set to really elevate the Novatouch. Without a doubt swapping out the keys isn’t going to be for everyone, but there is a large marketplace for it. The Barebones Novatouch is focused on that market as it doesn’t even come with stock keycaps. So you are going to need a keycap set right out of the hole.

The TenKeyLess layout and thin bezels keep the Novatouch small and perfect for people looking for a minimalistic desk setup or in my case LAN parties where we only get a half of a table. The only other issue I ran into and I didn’t talk about it much is the right angled cable included with the keyboard. Part of me loves it, but I know if your USB plug or PC is to the left of your keyboard or if you want it to go straight back you might have issues. The last time I covered the Novatouch my PC was to the left and it was a pain but lucky for me this time around with my new desk it is to the right now.

Being the Barebones model, there was obviously a big focus put on the price. Starting next week, the Barebones Novatouch is going to be available directly from Cooler Master for $140. Considering this is what $60 from the original MSRP it is a great deal. This pushes the price of the keyboard down in line with a lot of the Cherry MX boards and is a steal compared to any other Topre keyboards. You will have to include a keyset as well but even if you just picked up a cheap double shot set like THIS ONE on Amazon you are still MUCH lower than any other price on the Novatouch. Not to mention even that keycap set is an improvement over the stock caps. In the end the Barebones Novatouch ends up being a great deal and an even better product, how long before you are typing on your first Topre? 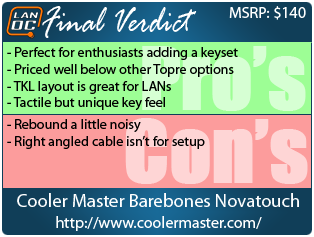 You might call him obsessed or just a hardcore geek. Wes's obsession with gaming hardware and gadgets isn't anything new, he could be found taking things apart even as a child. When not poking around in PC's he can be found playing League of Legends, Awesomenauts, or Civilization 5 or watching a wide variety of TV shows and Movies. A car guy at heart, the same things that draw him into tweaking cars apply when building good looking fast computers. If you are interested in writing for Wes here at LanOC you can reach out to him directly using our contact form.
Discuss this article
Log in to comment
Posts in discussion: Cooler Master Barebones Novatouch