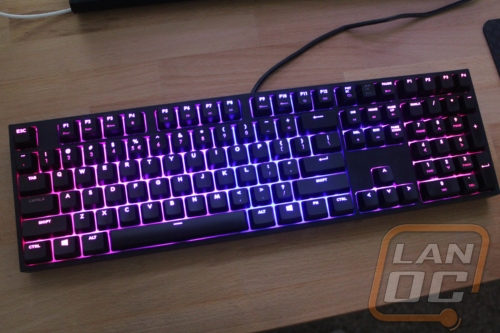 Just like the TKL Quickfire Rapid-I the Quickfire XTi has a very clean and simple design. You have a flat black casing with a thin bezel on the outside edges. The clean look is aided by Cooler Master avoiding using any of their logos on the visible areas of the keyboard. Seriously the didn’t even hide one back along the back edge like in the past! The keyboard has a full sized ANSI key layout meaning it has a full F key row, direction pad, and a full number pad over on the right side. Cooler Master went with a simpler font for their legends as well, something a lot of people complained about on some of their past models. The clean design actually puts me in an interesting position when writing this, there just isn’t anything to talk about in the overall design beside what I have broken down by photos below. 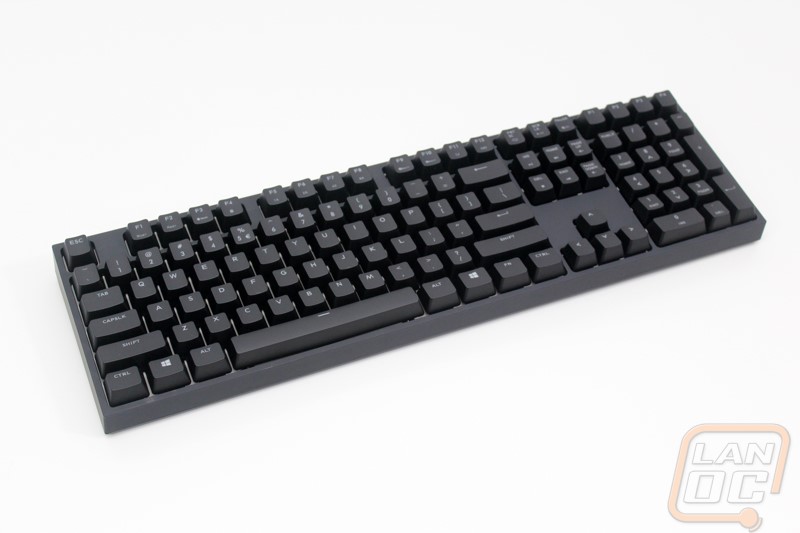 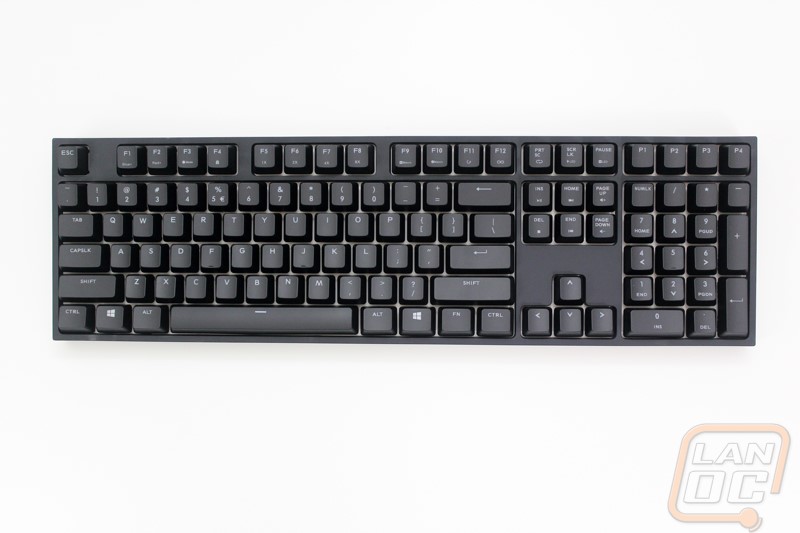 Like past Quickfire models Cooler Master oes take advantage of a function layer to add additional features to their keyboards while keeping the clean look. The first three F keys are the control keys for the backlighting. Unlike the Rapid-I they didn’t stick with the white backlighting so for the XTi we have a dual color red/blue LED. The controls here let you select the level of blue and red you would like to use giving you different shades of red/blue/purple. The third button is the mode button that lets you flip between multiple lighting effects just like the original. The fourth button is the windows key lock button that turns the windows key off for gaming. 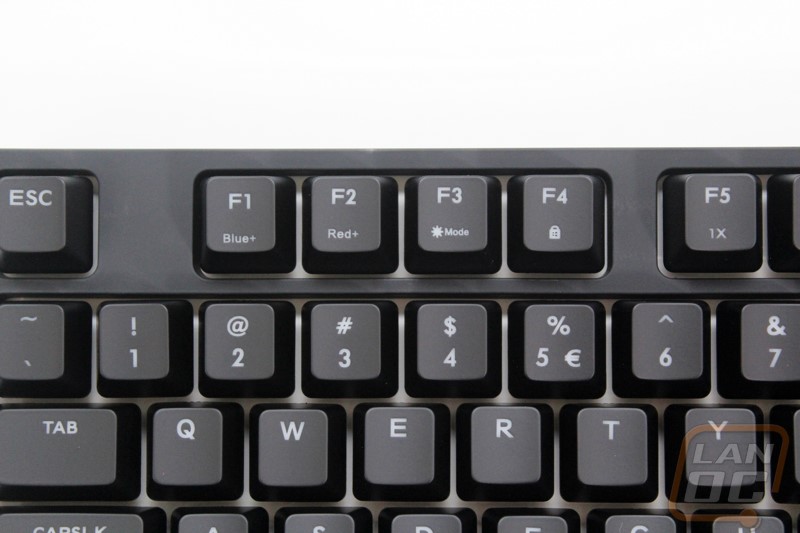 The next four F keys have 1x-4x on them. These actually control a rapid fire effect. You can set how quickly you would like the keyboard to resend the keypress while you hold it. In some situations having this on is a bad thing but in some games it could be helpful as well. 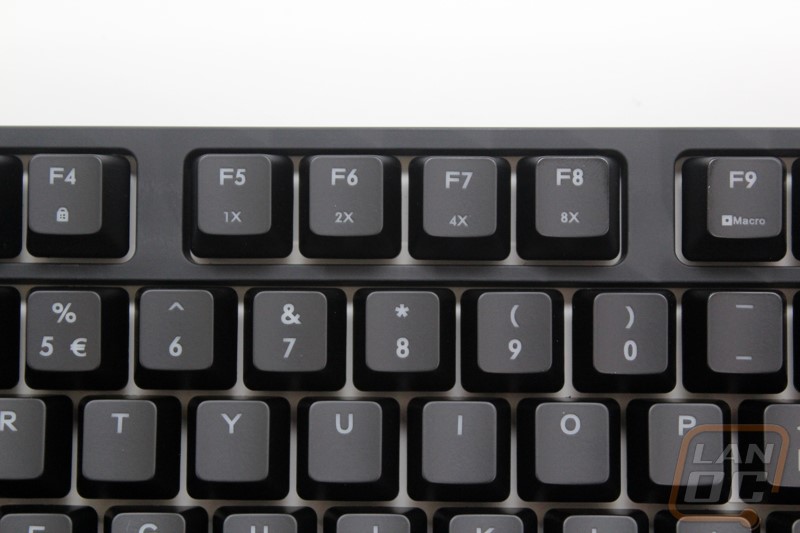 The F9-F12 keys used to be the media keys but for the XTi they moved to a completely new function. The XTi now actually lets you program macros without the use of any software. The first two keys here are the record and delete macro keys. To do this you press F9 to start recording, then you select the key you are reprograming, then you type your macro. From there we go back to the function layer and select from FN-F11 FN-F12 FN-PrintScreen to select the macro mode. F11 replays the macro once, F12 makes it a toggle switch, and print screen will set it to loop over and over. Then you press FN-ESC to exit out. 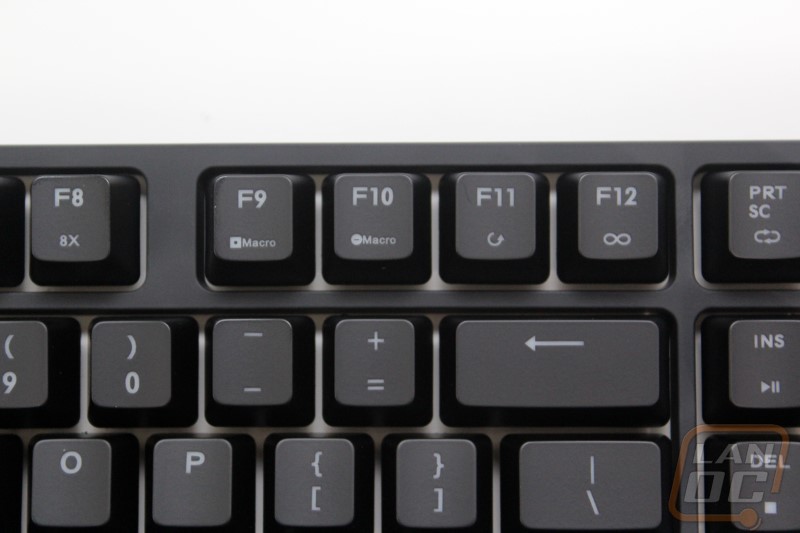 For those of you who were worried that they maybe dropped the media keys, they just moved them down to your home keys. This is actually the same place the Code has them and they are much easier to reach in this location. Up top above the home keys we do have one more set of function keys. Here the scroll lock and pause buttons let us program a completely custom LED layout. You use these two keys to record or delete the lighting layout. So you press FN-Pause to start recording. From there you hold function and use the F1 and F2 keys to select the color you want to place, the function key lights up as you do this to show you what you are working with. Then you click every key you want to be in that color. You repeat that step over and over until you have the layout you want. It’s not exactly simple, but it is very cool that you don’t need software to get it done. I do wish they would at least include proper inistructions on how to record this and macros with the keyboard though. I would consider myself to be fairly experienced and I still had to dig up a video Cooler Master published to learn. 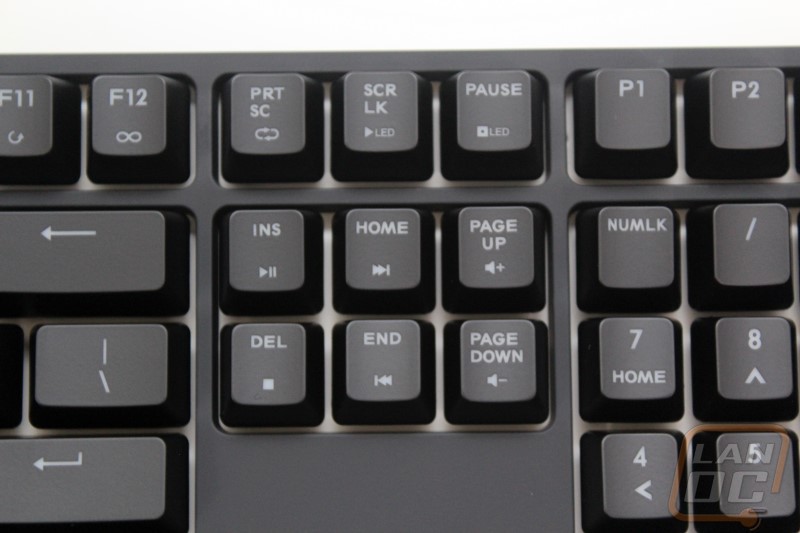 On top of being a standard full sized layout, they also made sure to go with the accepted standard for the bottom row. A lot of manufactures have been going with an untraditional bottom row making it hard to replace the keycaps. The XTi is just begging for a new set of caps, the only issue is there aren’t many that support backlighting. 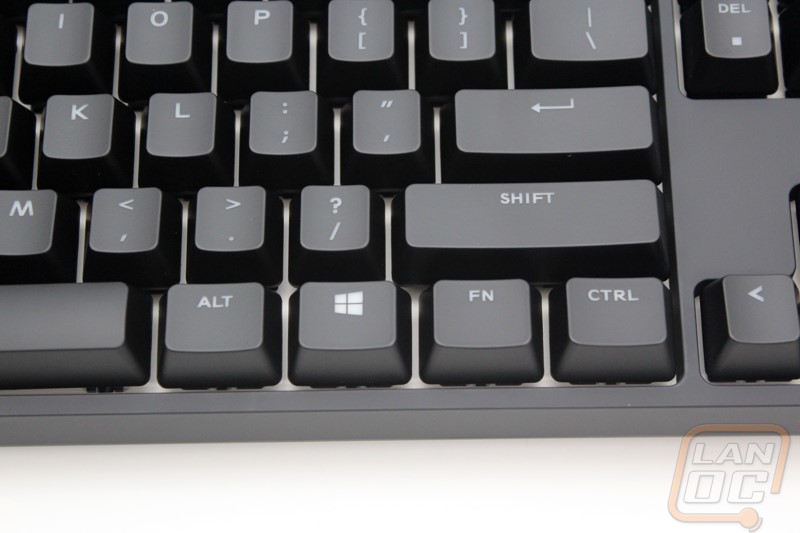 Over on the right side we have the full number pad. Up above it Cooler Master slipped four additional keys. The P keys let us flip through four custom profiles in addition to the base profile on FN-ESC. This lets us make custom lighting and macro profiles and flip to them on the fly. 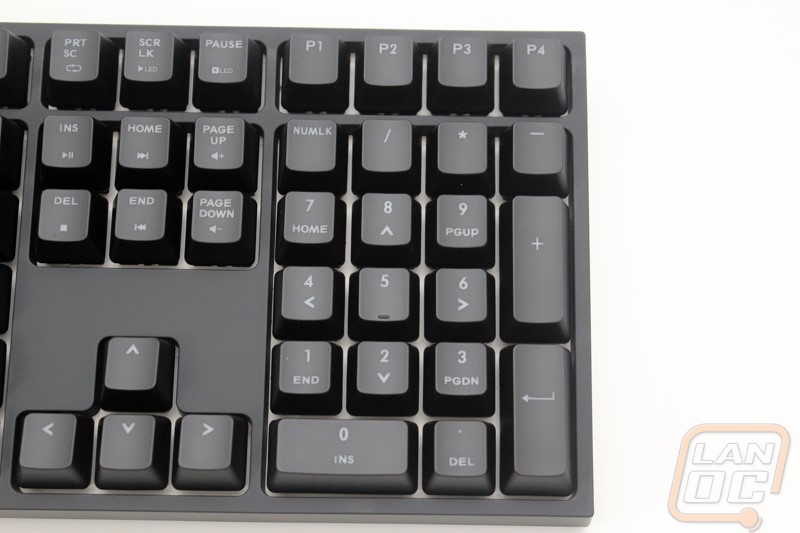 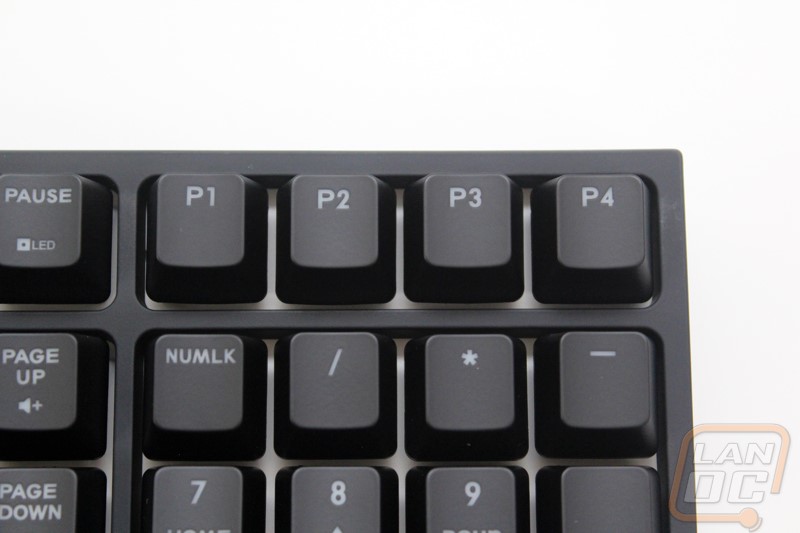 Like I mentioned earlier, the design around the sides doesn’t have anything going on as well. The same flat black finish carry’s on down the sides. The XTi does have a natural rake to the layout in addition to the rake that the keycaps provide and that you can add with the flip out feet. 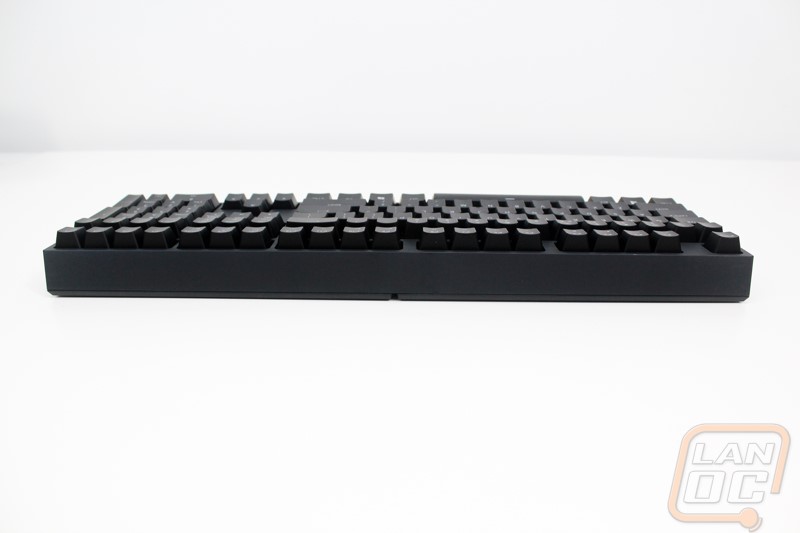 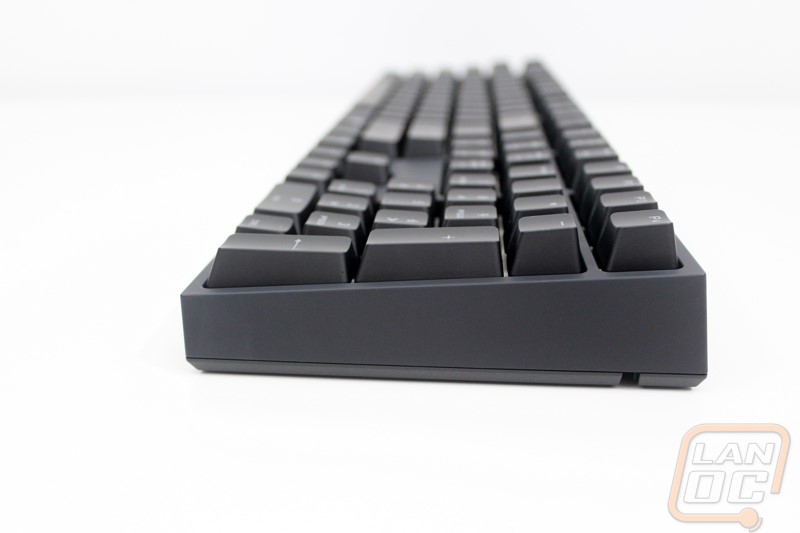 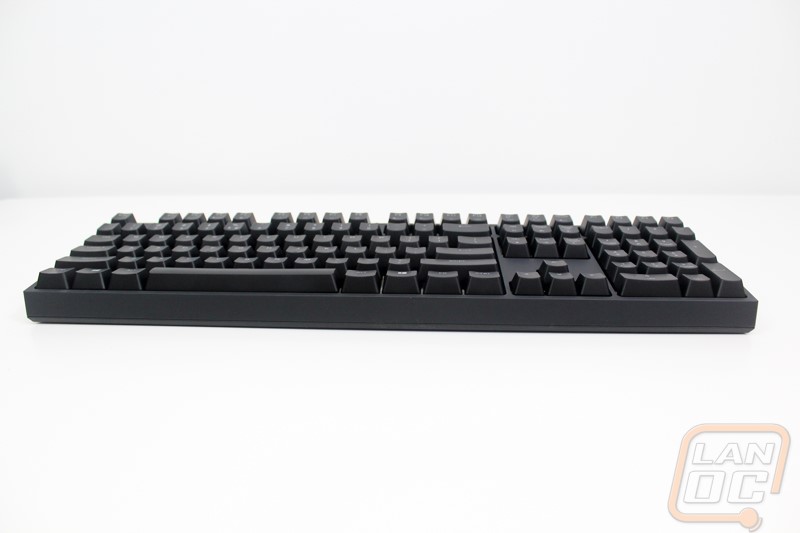 Only on the bottom of the XTi do we actually see a Cooler Master logo at all and even here they have printed most of the required logos in a print that doesn’t stand out too much on the black. Really the only thing that stands out is the white bar code sticker with the keyboards serial number that is tucked into the recessed USB area. For feet the XTi has four inch wide rubber feet on the corners. They also include flip out feet that also have rubber on the ends to help keep everything stable. For the detachable USB cable you have a micro USB plug tucked away. They left three cord options, you can run it out the center or out the left or right sides via a small cord track. 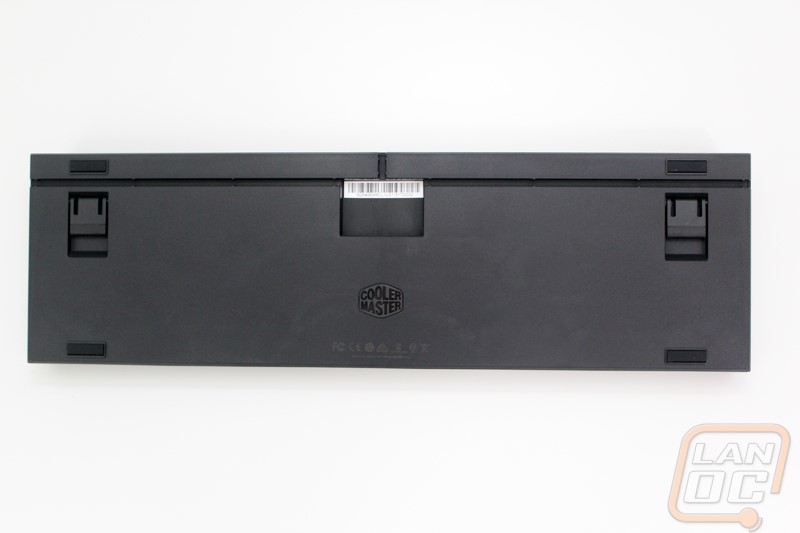 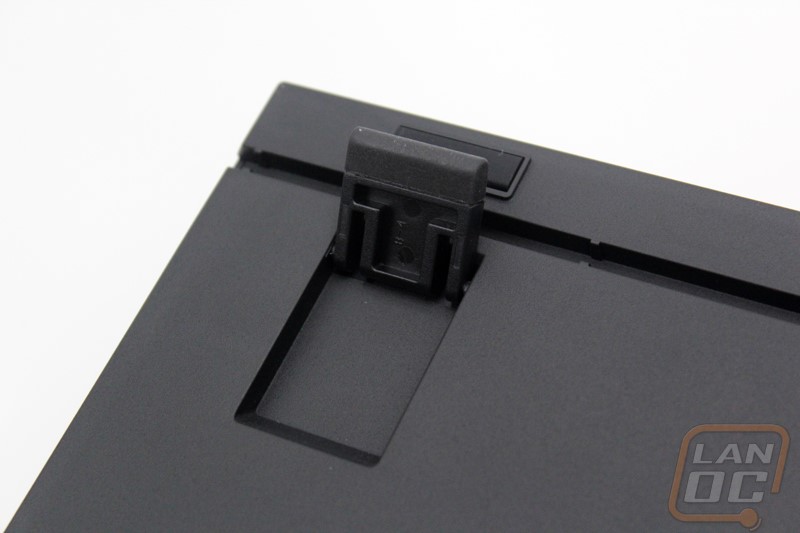 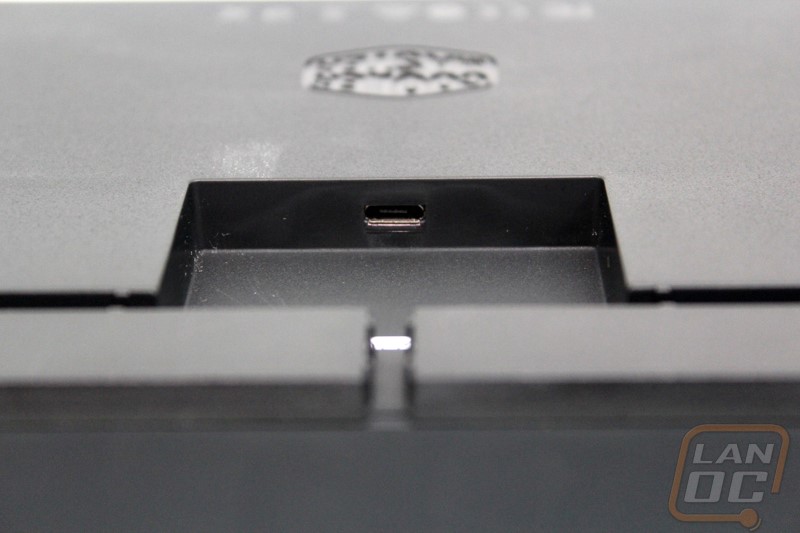 As I mentioned in the packaging section our XTi sample came with Cherry MX Green keyswitches. The XTi officially is available with Cherry MX’s blues, reds, and browns. The greens are currently not available. But still a lot of enthusiasts will be happy to see that Cooler Master has stuck with Cherry branded switches and not jumped ship to the easier and cheaper to get knockoff brands. With our keycaps pulled we can also see that the XTi uses a plate mounted design. This means the switches snap into a metal backplate and then have the PCB under that for a lot of additional strength. The backplate is painted bright white to help reflect the backlighting. Speaking of that, for the XTi they went with an LED that outputs red and blue meaning it can cover both and anything in between. I was surprised they didn’t go full RGB, especially considering Corsairs exclusivity is over. For the longer keys like shift and the spacebar Cooler Master went with Cherry stabilizers. This means you don’t have to fight with the small stabs that attach to the back of the keycap and that metal bar, it is all built into the keyboard, making replacing the keycaps even easier. 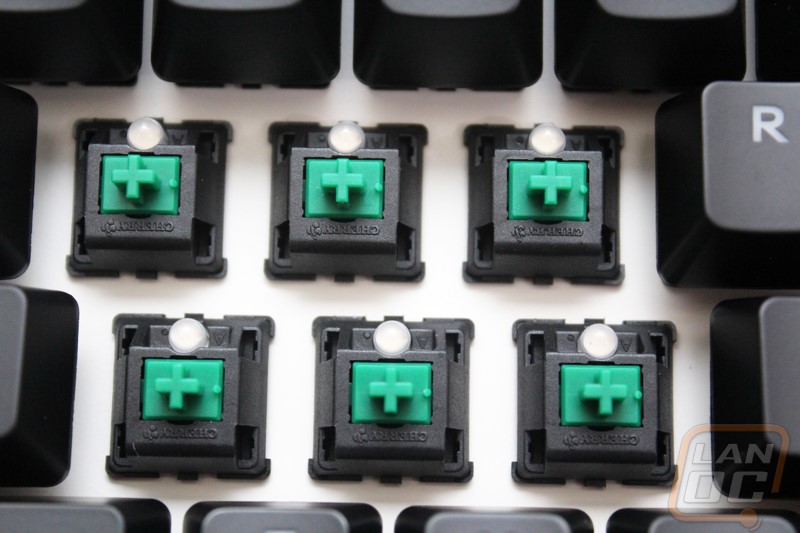 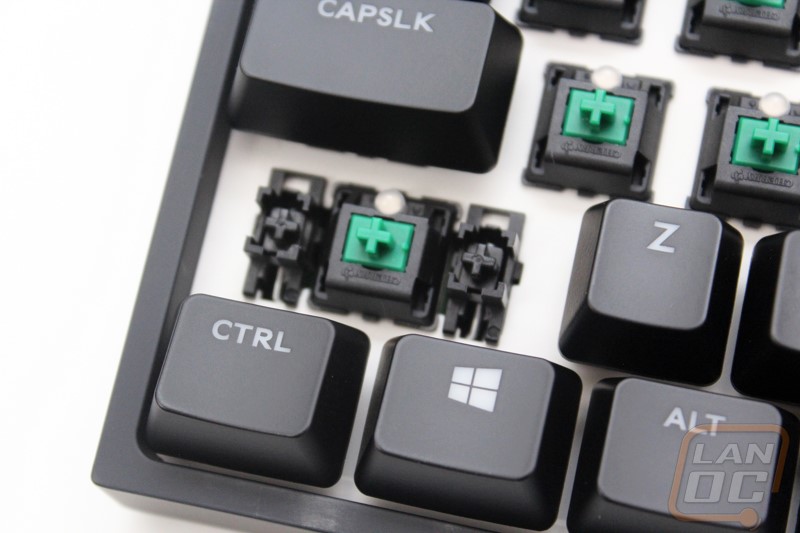 For the keycaps Cooler Master went with a standard OEM profile. This means rows R1-R3 (the bottom three rows) all angle up at different angles. Row four is mostly flat and then the top two rows are the tallest and angle down slightly. The keycaps themselves are made of a translucent ABS like just about any backlit keyboard. The base keycap is painted black and then the legend is etched out of the top. This does mean you can wear through the key with use, but this isn’t any different than any other backlit keyboard. The caps themselves aren’t especially thick but about the same thickness as any other non-aftermarket keycap. 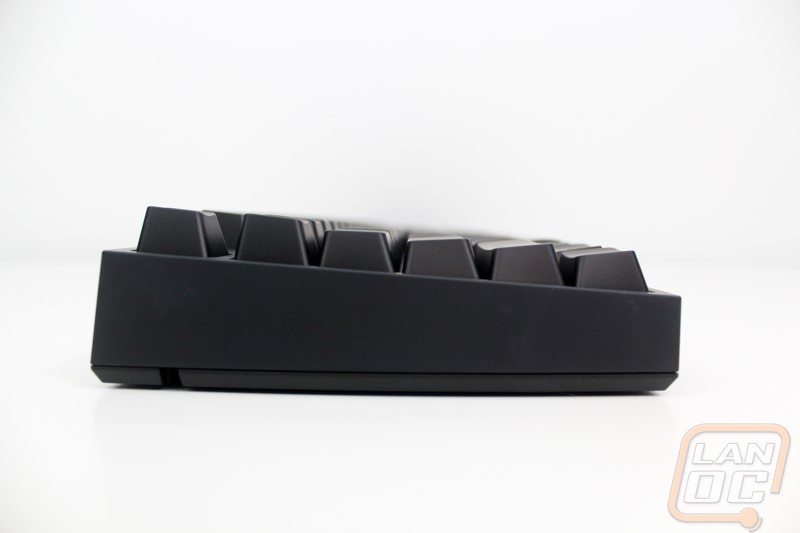 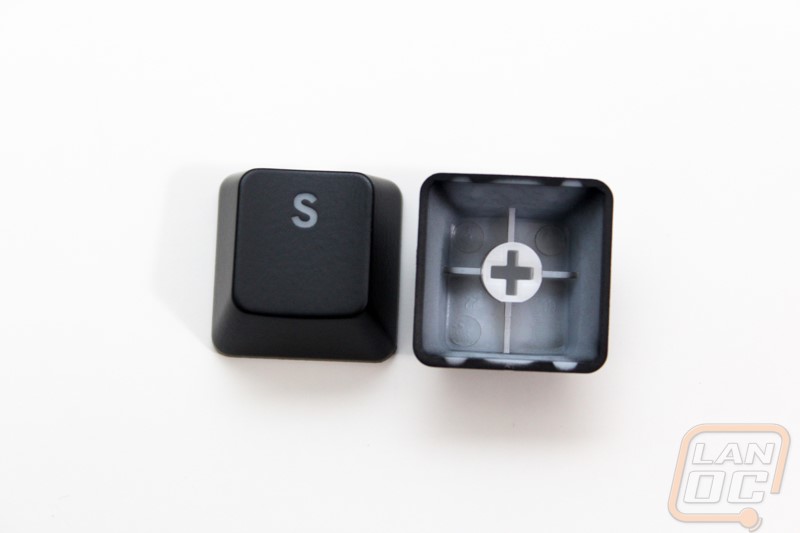 We have 1236 guests and one member online