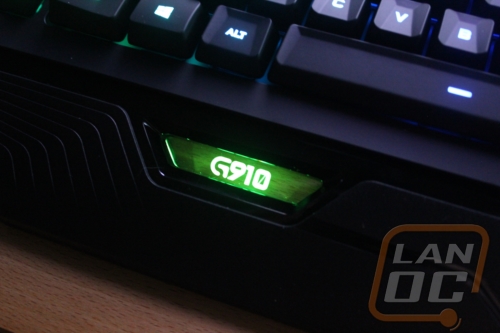 Without a doubt the G910 is something completely different from anything else out on the market. They took the same aggressive styling that they introduced on the G602 wireless mouse and later on the G502 mouse as well and packed it into a keyboard. The G910 is a full sized mechanical keyboard meaning it has a full number pad, F row, direction pad, ect. When compared to some of the older G series keyboards it is actually a little smaller width wise but it is still a deep keyboard. Part of the reason for this are macro keys on the side and top on top of the standard keys. The font used on the keys is similar to the font used on the G710+ only this time around they added a design on all of the “gaming” themed keys, specifically the WASD keys, G keys, and the direction pad. This isn’t the first time I have seen a focus on gaming specific keys, a lot of manufactures have even included rubber or textured keycaps for those same keys. I do wish that Logitech would send standard keycaps as well though. The aggressive styling of the G910 is enough to get its point across for me, the extra design is more overkill than anything else. I think they could almost put together a keyboard without the aggressive styling but the same features and open up an even bigger market. I know as I have grown older I find myself preferring cases and peripherals that are a little more subtle but still with the same features like the new switches, RGB lighting, and media controls. That said, the G502 had an aggressive styling but that didn’t stop it from being an amazing mouse, let’s look at the rest of the G910’s features and see how it performs before discounting it. 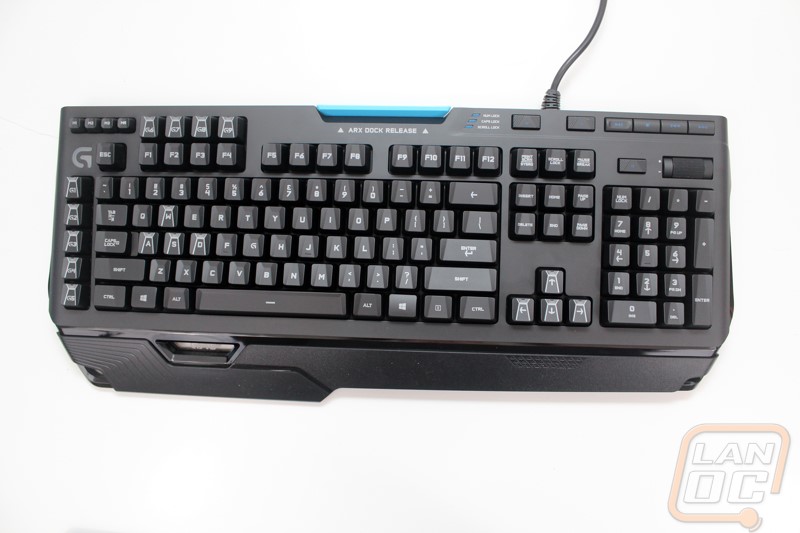 So the G1-G5 keys on the left side of the keyboard are basically the same as what I saw with the G710+ and even a few of the other G keyboards. The addition of the G6-G9 keys up above the F keys was a nice surprise though. The F row is actually moved a little closer to the number row to make sure the G keys are still reachable. I’ve been saying for years that a would rather have a few macro keys in between the number row and the F row. This isn’t exactly that, but it is a step in the right direction. Up in the top left corner we also have four buttons. The first three let us flip through three sets of macros. The MR button allows you to actually program a macro on the fly without getting out of game or using the software. 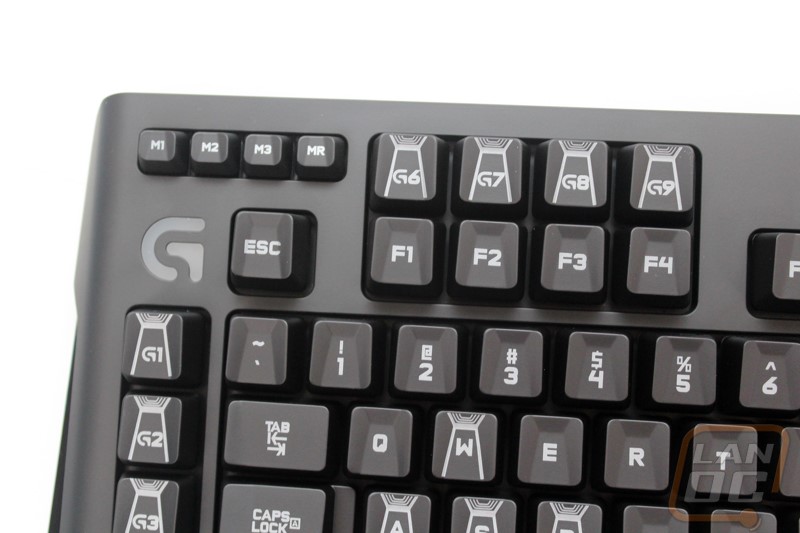 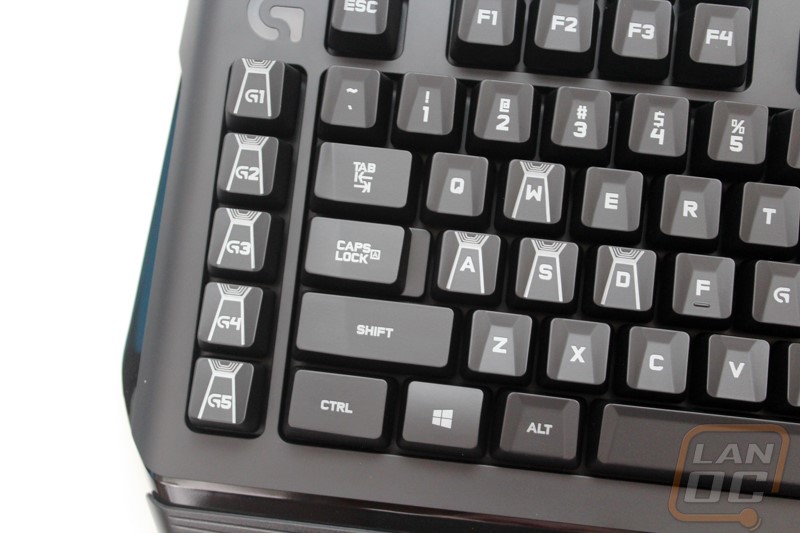 Rather than include a function layer like everyone else, Logitech went with just a few basic keys and build in everything that you would need the function layer for. Right above the number pad they used a roller for your volume control just like on the G710+ and alongside of it is a mute button. Having a real volume knob is always much nicer than function layer volume up and down buttons. Up in the top right corner you get forward and back, play/pause, and stop for media controls. The play/pause button has an indented shape to hep you find It when in game. They are also backlit to help with that as well. Speaking of backlighting, the button next to the media controls turns the entire keyboards backlighting on and off. You can’t control the brightness on the fly though, you have to get into the software to do that. The last button turns on game mode where the windows is locked. TO the left of the game mode button are the standard number, caps, and scroll lock LEDs. All of the buttons here are all membrane so keep that in mind. 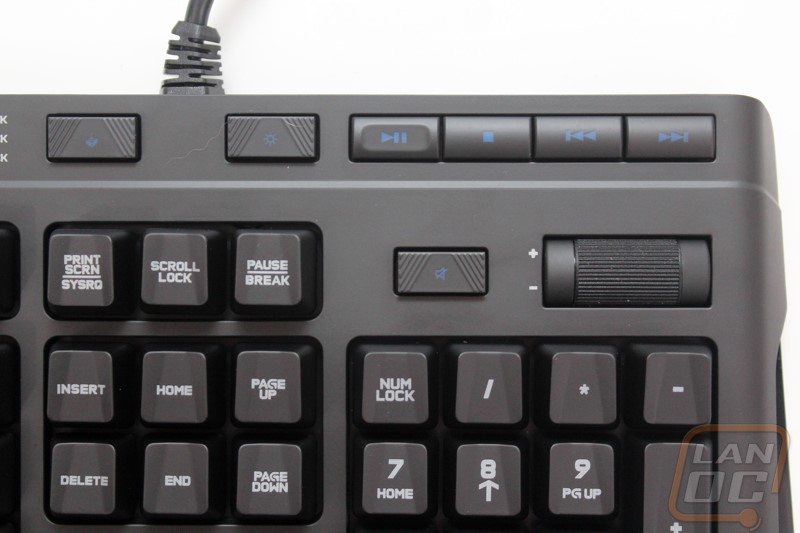 Rather than add additional costs to an already expensive product Logitech went a new direction with the keyboard display that they introduced years ago with the original G15. They dropped the screen all together and in its place we have a slide out piece of plastic that will actually hold your phone or tablet. They call this their Arx Dock. To go with it they also introduced an app on Android and iOS. Using their software you can sync your mobile device to display PC hardware information, control your media, and also display anything the game wants you to display. The example on Logitech’s website for example shows a tach and speedometer on the display while you are in a racing game. The dock doesn’t charge your device so you will need to keep a charging cable nearby. 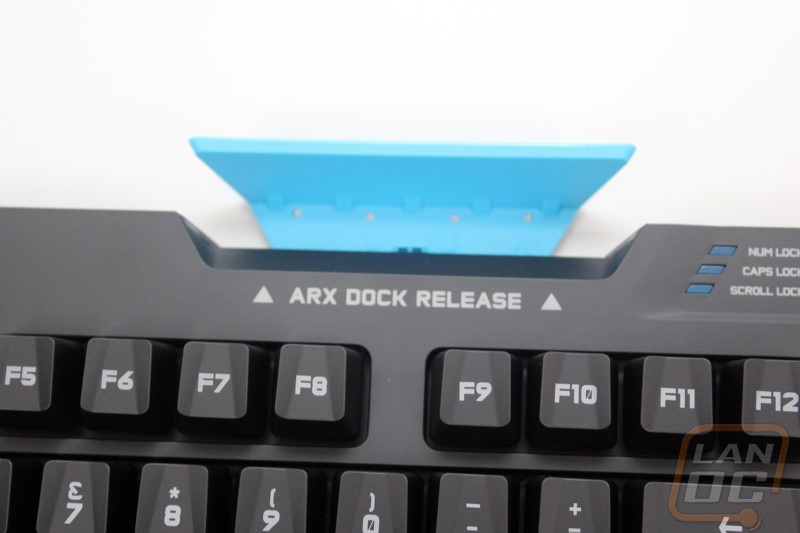 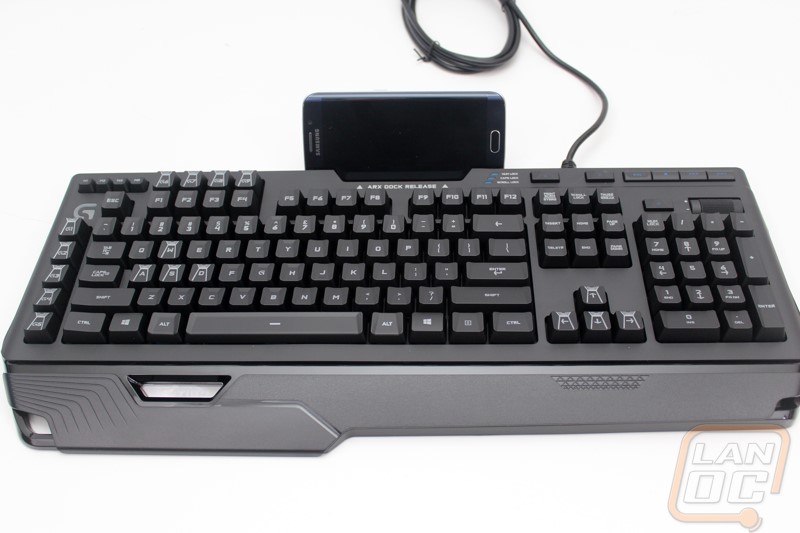 A lot of keyboards come with a detachable wrist rest but the G910 actually comes with TWO. One has a large pad on the left side where a gamer would typically have their hand, the other is a little more subtle but still has more mass under your left wrist. Personally I would prefer to have one with the large left pad and another than is long all the way across. The wrist rests attach to an unusual frame design that sticks out up under them for support. The design is cool looking but the downside is you can’t run the G910 without a wrist rest. 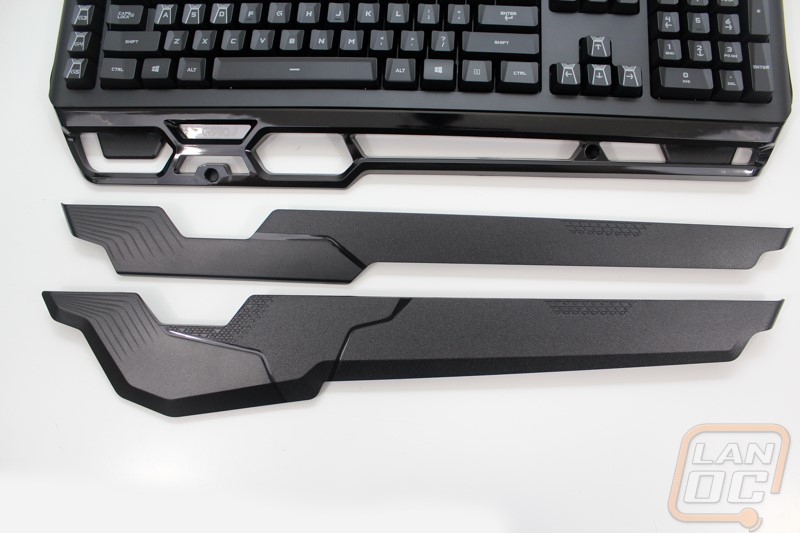 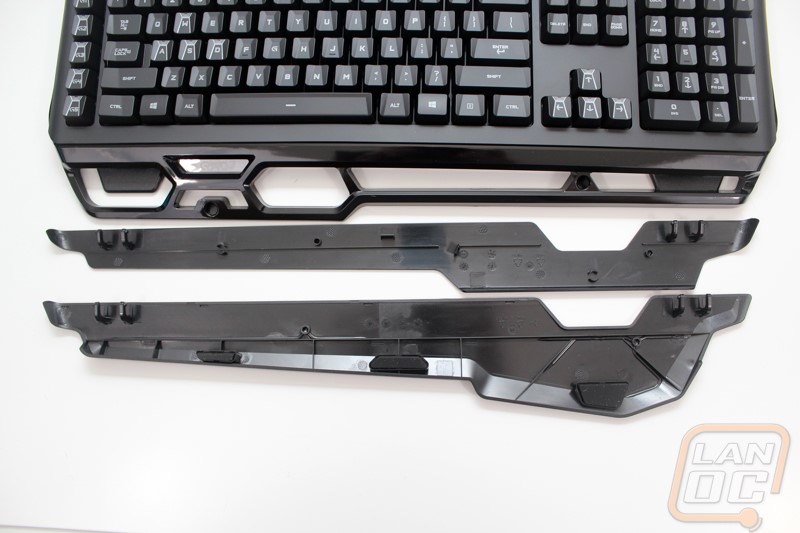 Typically most keyboards have basic flat design on the bottom but with the G910 Logitech designed all kinds of shapes into the base. In the middle you got have the standard sticker with the serial number, model, and all of the required regulation logos. The G910 has four main rubber feet with the two under the wrist rest being the largest but the two on the rear are also larger than a normal keyboards. There is a small one in the front center as well. There is also a rubber base to the slide out ARX Dock as well. We can see the framing under the wrist rest, I still can’t get over how weird of a design that is. You can also angle the G910 up if you prefer with two wide flip out feet. The feet do have rubber on the end, but there isn’t much, if you use these much I have a feeling the rubber will wear down and become useless on them fairly quick. Thankfully the huge pads on the front should be enough to keep 2 or 3 keyboards from moving. 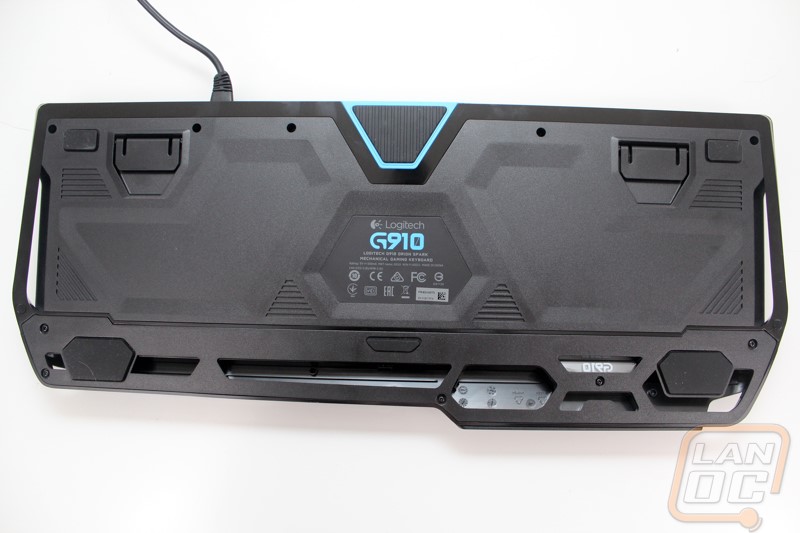 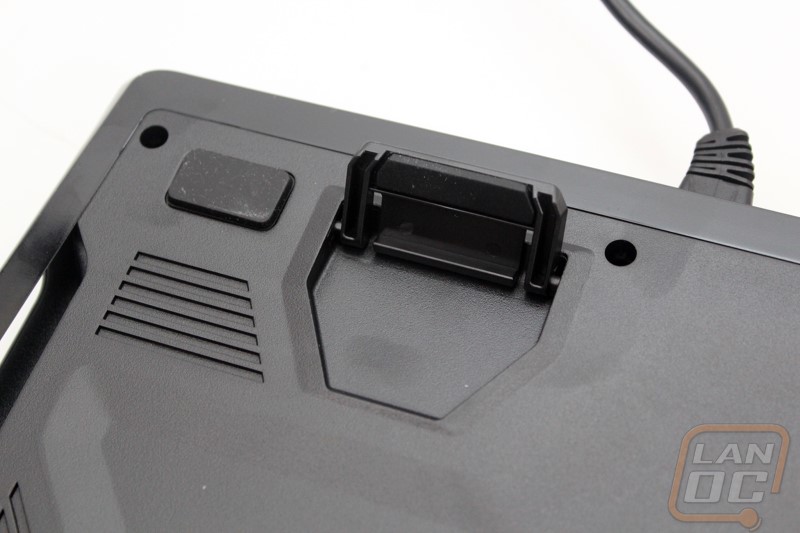 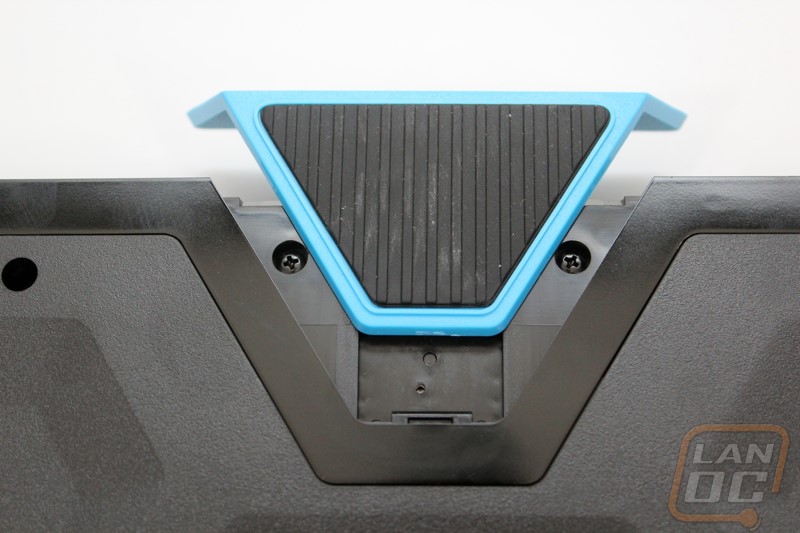 So here we go, we finally get a good look at the new Romer-G switches. Physically the switches take up about the same amount of space as a standard Cherry MX switch. The difference here is with a Cherry switch the main portion of the switch is in the center and the LED lighting is basically an afterthought with the LED on the top or bottom of the switch. When designing the Romer-G switch they were able to focus on the LED placement, putting it in the middle of the switch and then forming the slider around it. 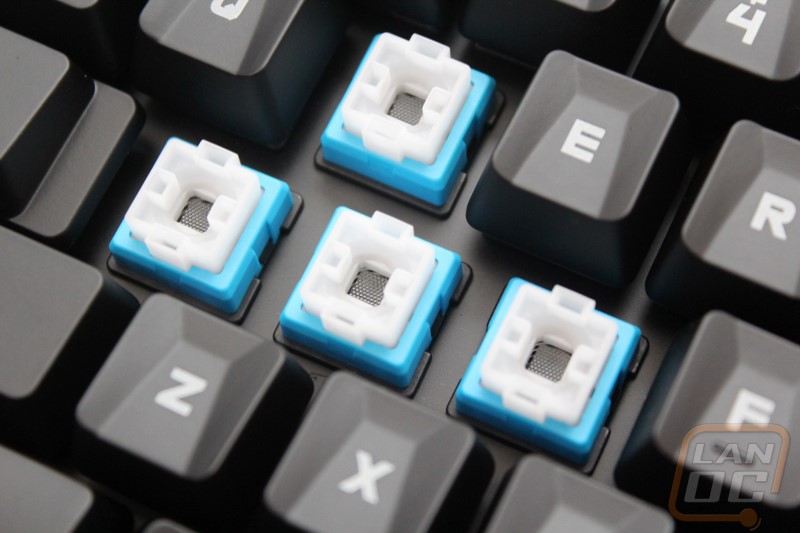 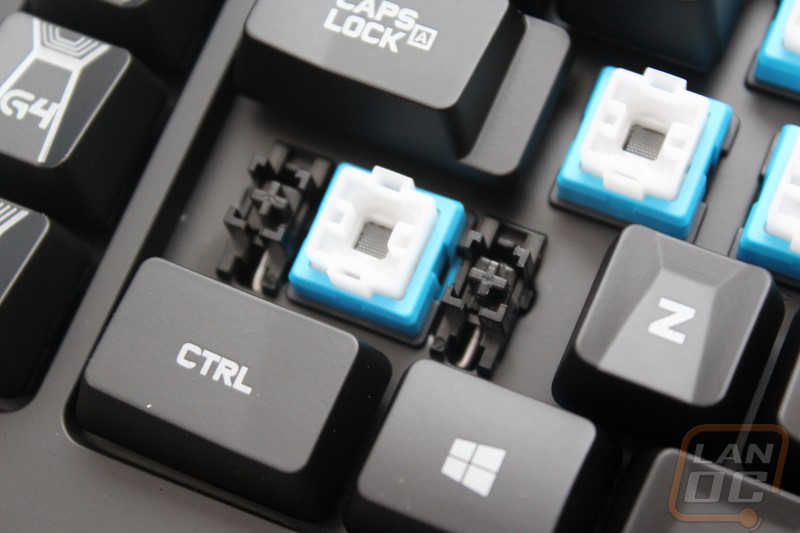 Given the completely unique Romer-G switches the keycaps on the G910 are designed specifically to work with them. On the underside we can see that rather than the normal stem that you would find on a Cherry MX keycap these caps just have four clips that latch on to the switch. This design in combination with the center mounted LED helps put the light up the middle of the keycap. As for the keycap itself Logitech uses a thin transparent abs plastic with a black paintjob. The legends are etched off, just like most everyone else does for their backlit keycaps. 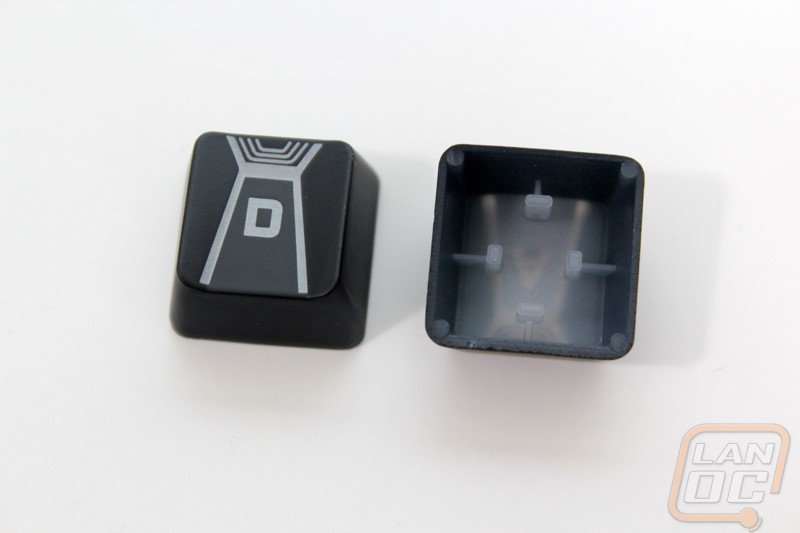 The shape of the keycaps on the G910 are something I’ve never seen at all before. Rather than having a cylindrical top shape they have an angled design that has hard edges. Some of the caps just have angles on the sides and other caps have the angled shape on the sides and top. Specifically the keys on your left hand have the three sides top shap and everything you would use your right hand on doesn’t. I have no explanation as to why though. With these being oddly shaped, ABS, and thin it’s a shame that there won’t be any replacement keycap options available in the aftermarket like with Cherry MX switches. 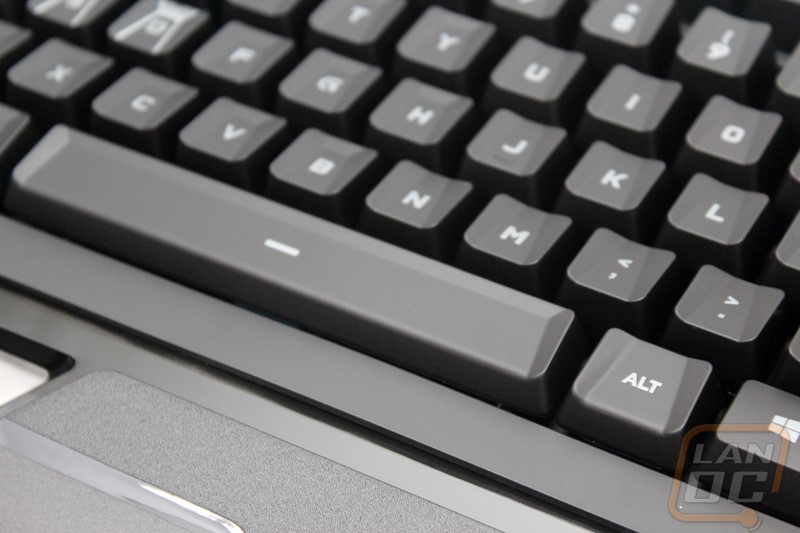 With the G91 using a completely new switch and a keycap design that is unique to the keyboard its no surprise that when we look at the keycap profile from the side it’s not using an OEM style profile. There is a bit of a curve to the keycap profile, just like the OEM, but the curve is less pronounced. The G910 isn’t a flat profile, but it is close. What I also found really weird about the keycap profile when I was checking it out is that they aren’t even uniform from row to row. The G keys on the left have a different profile than some of the other keys in their same rows. Even weirder in my option is that the modifier keys on the left side of the keyboard don’t have any profile to them at all. Specifically the left shift, control, and the windows key. If you look close you can see that they are basically flat where the keys next to them are profiled. I don’t understand why because the modifier keys on the right side didn’t have this issue. Those same keys hardly have any of the weird angular shape to the top of the caps as well. Given that they even went out of the way to give the spacebar a matching shape I don’t understand why these would hardly have any shape at all. 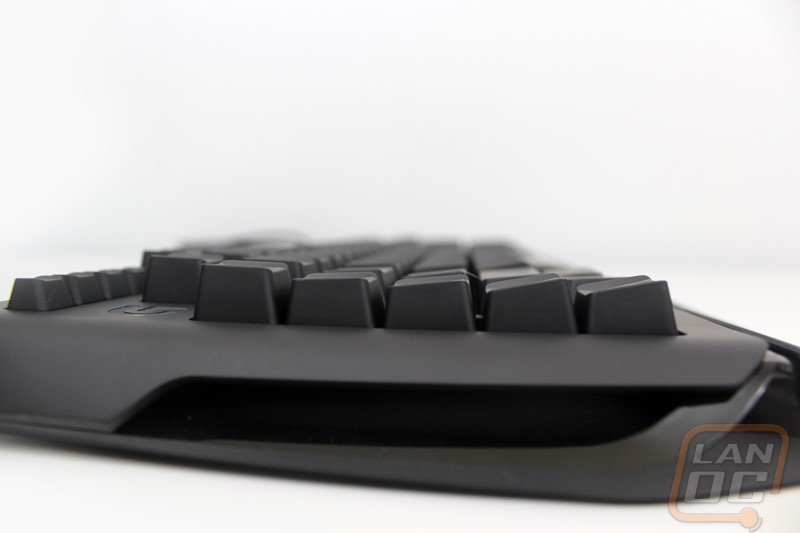 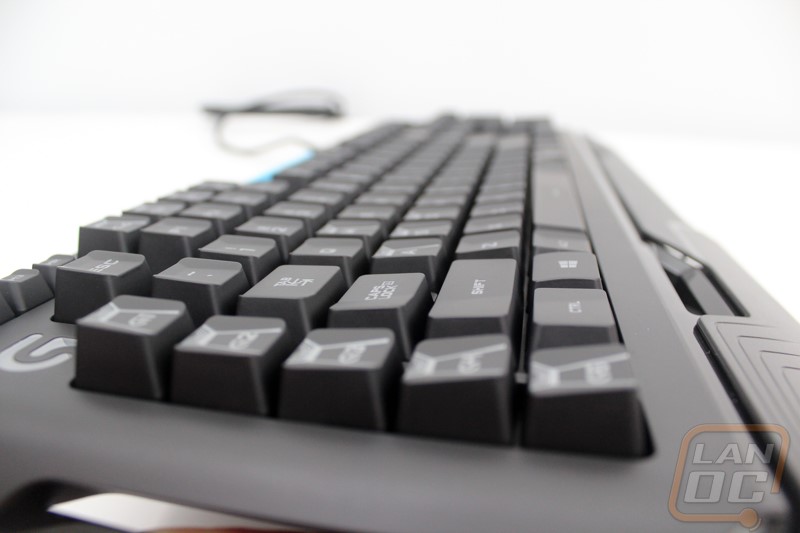 For the cord on the G910 Logitech went a completely different direction than everyone else. The cord isn’t detachable and they dropped the sleeved cord design. In fact the cord is just a basic thick plastic with nothing worth noting. They didn’t even fish for an extra marketing port with a gold plated cord like most other manufactures. What they did do though is manage to run all of the backlighting and keyboard off of one plug, keeping things simple. 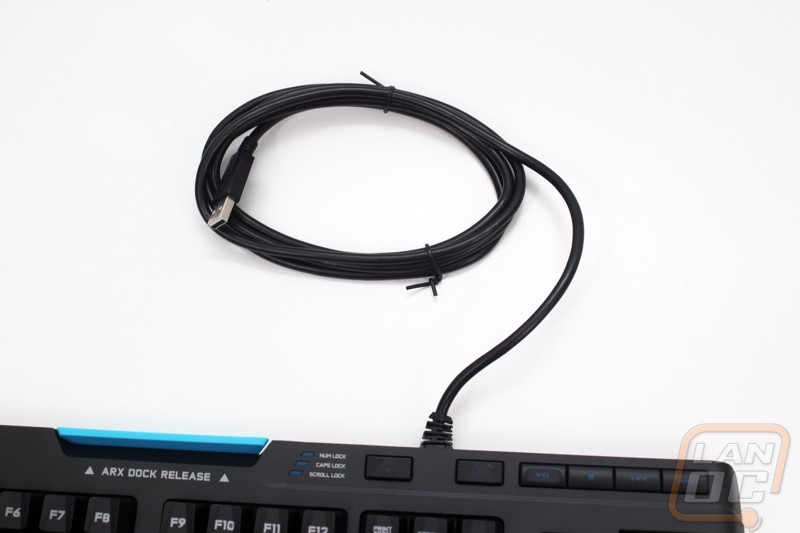 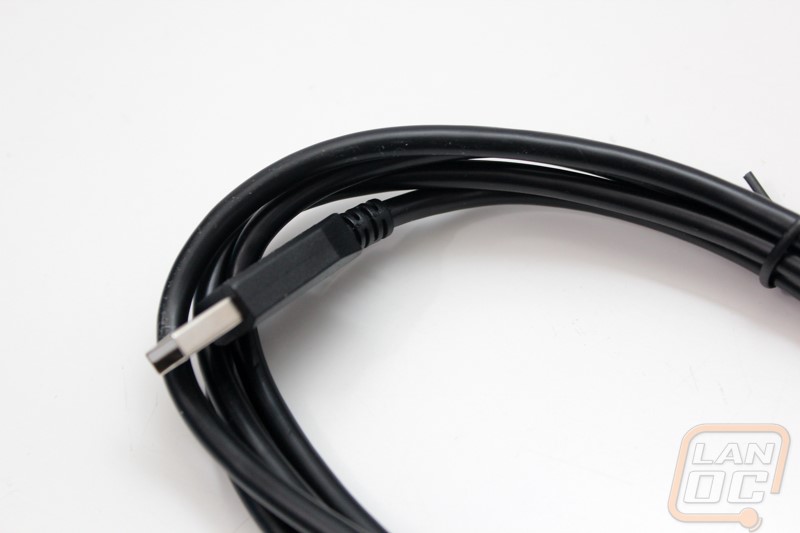