Cherry MX Board 6.0 - Photos and Features 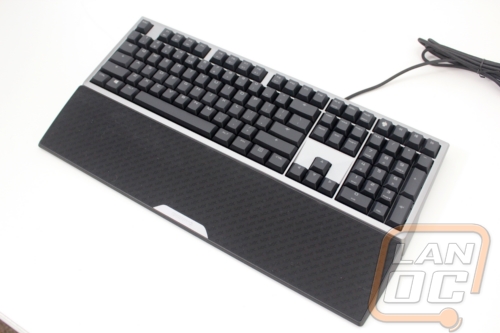 The Cheery MX Board 6.0 is a full sized keyboard with a nearly standard key layout meaning it will support any normal aftermarket keycaps. The exception luckily isn’t in the bottom row like most keyboards. Cherry slipped another four keys in up above the number pad. Unlike most other keyboards with buttons up there all four of the additional keys are still mechanical and backlit as well. The keyboard itself has a silver finish with black keys and a red backlighting. The bezel around the sides is about a standard thickness but they did save space on the bezels between the number pad and the direction pad and the bezel between the direction pad and the main keyboard. A also love the slightly angled area above the direction pad that is slightly sunken in, its subtle but a nice bit of style. The rest of the keyboard has a slight angled area on all of the sides as well to get away from that boxy keyboard look. 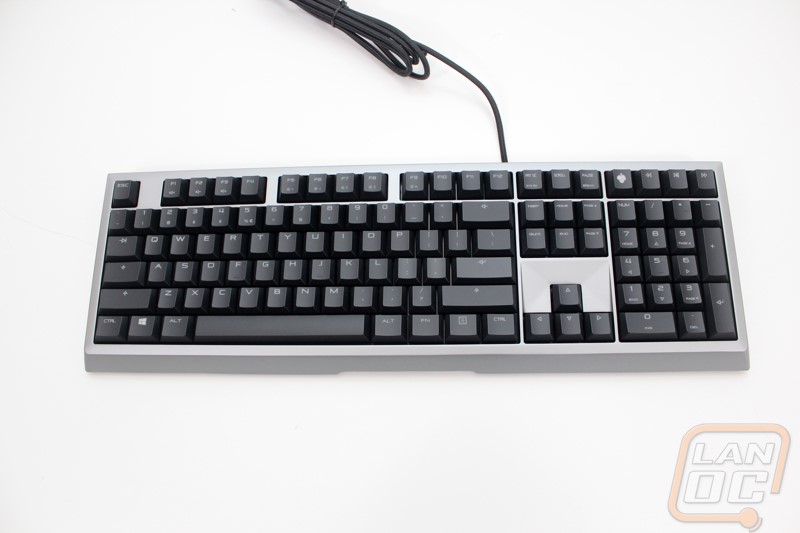 For legends Cherry did go with a slightly weird font. I have a feeling some people aren’t going to like it given the backlash that Cooler Master got when they used a similar font. That said I like it mostly although the X is far too wide, it almost looks sideways. For modifier keys they used a mix of symbols and words. For example the caps lock, tab, and ship keys are all symbols but the ctrl and alt keys are words. For the windows key they went with a Windows 8 logo. We can also see here that they went with a standard bottom row meaning all of the keys other than the space are the same 1.25u size. 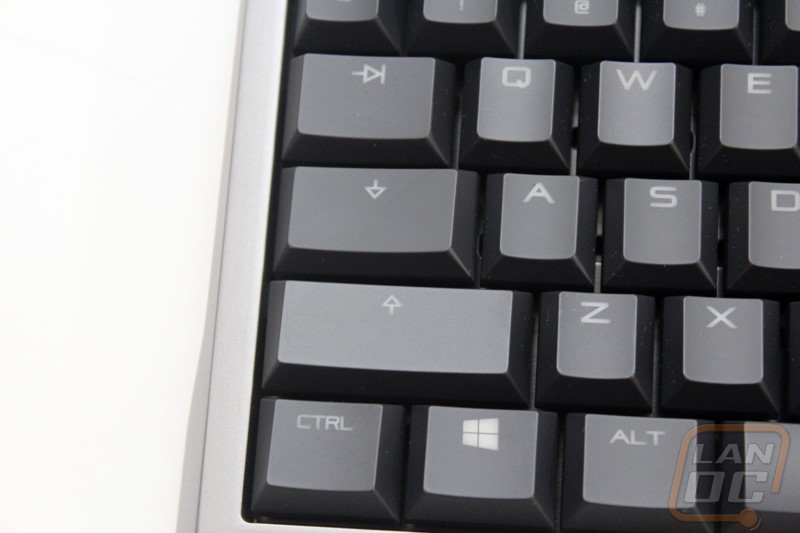 Like most other keyboards these days Cherry did include a function key and slip in a few different controls in the function row. Starting at the F1 key you have volume mute, up, and down controls. Then from the F5 key we have lighting controls. The F9 key turns the backlighting on and off. The other lighting controls are more interesting. So interesting in fact that I had to look in the manual to figure it out because two of them didn’t seem to work at first glance. So you have two sets of backlighting brightness controls. On the right they turn the brightness up and down 10% at a time. The left controls turn the brightness up and down as well, but only at 1% at a time. I’ve never seen a keyboard have that level of brightness control, even the 10% buttons are more than you normally get. Most keyboards have 3-5 brightness settings and that is it. 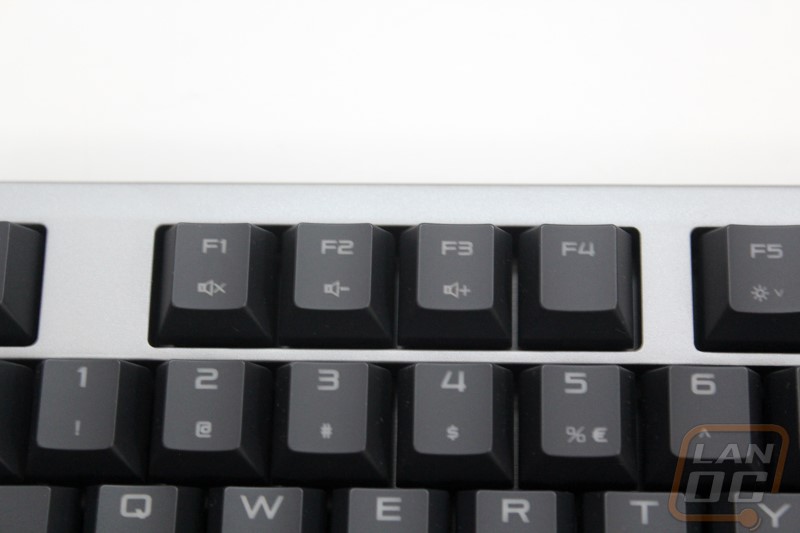 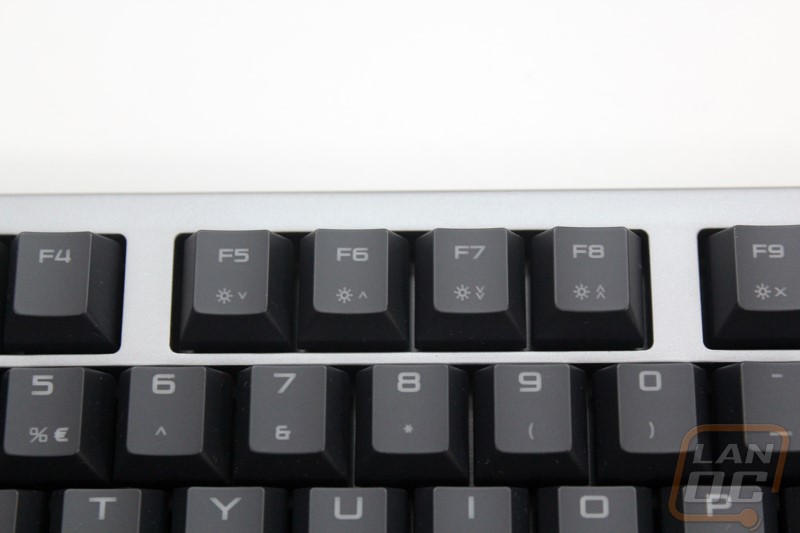 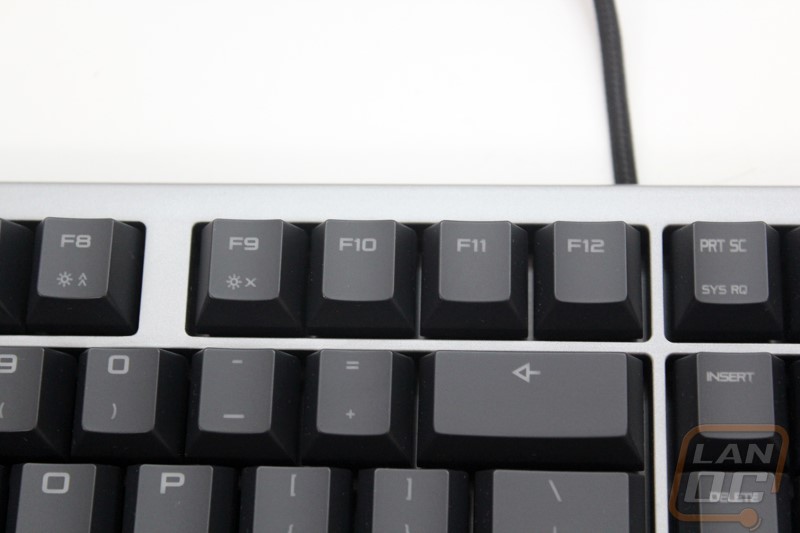 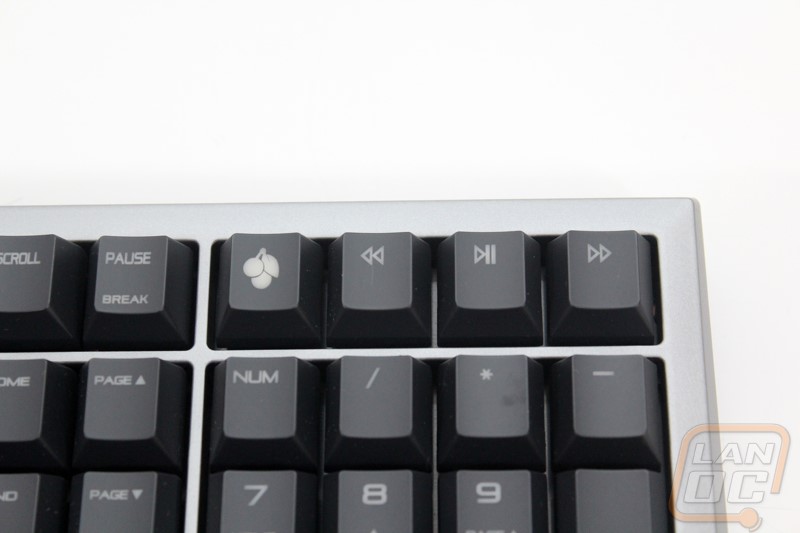 The cord is a fairly standard with just over 6 and a half feet in length. The keyboard only requires the one USB plug and for it they put a gold coating on it. The cord itself is sleeved with a tight weave to add additional protection. 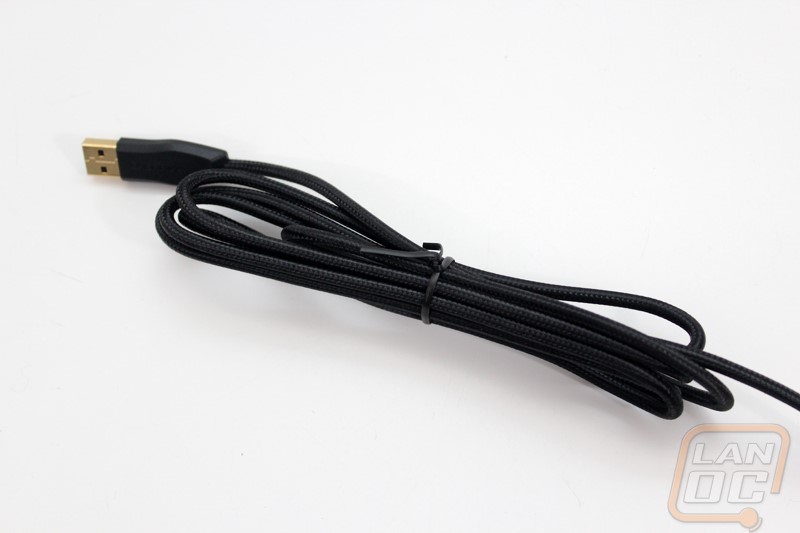 One of the best features of the MX Board 6.0 has to be the aluminum casing. The bottom half of the keyboard is still plastic but the top half is aluminum with an additional coating over it to prevent wear and a weird finish on the metal. The case really sets the keyboard apart from all of the other Cherry keyboards but what I find the most interesting is they managed to give it a unique look without going flashy or overly subtle. There is a little style in the case along the sides and down on the bottom edge there is a slight raised area to fit the wrist rest. Just above that you can see a Cherry logo molded into the case as well. 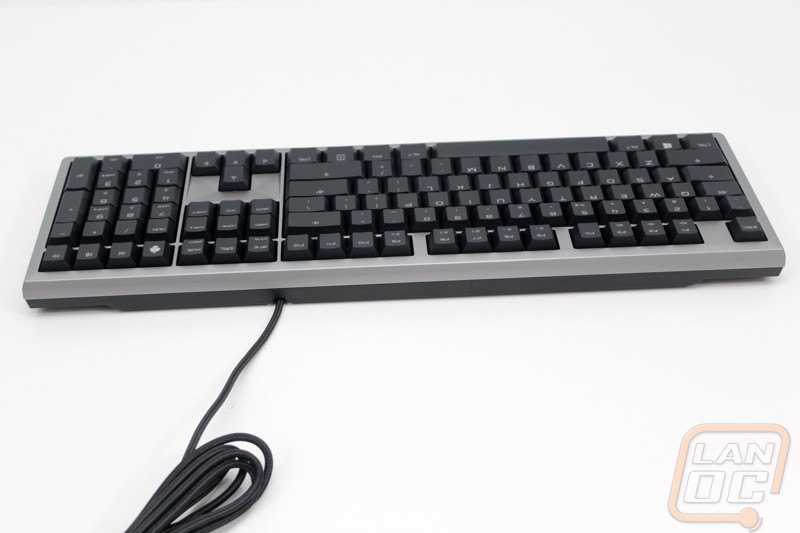 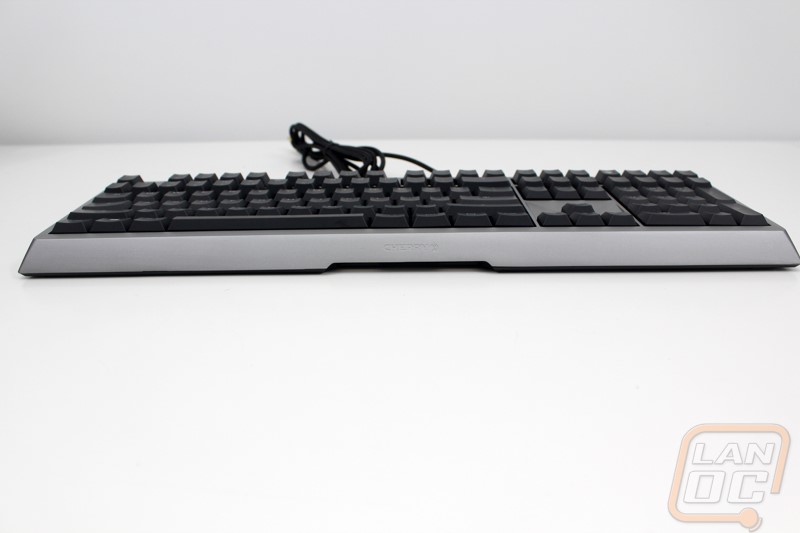 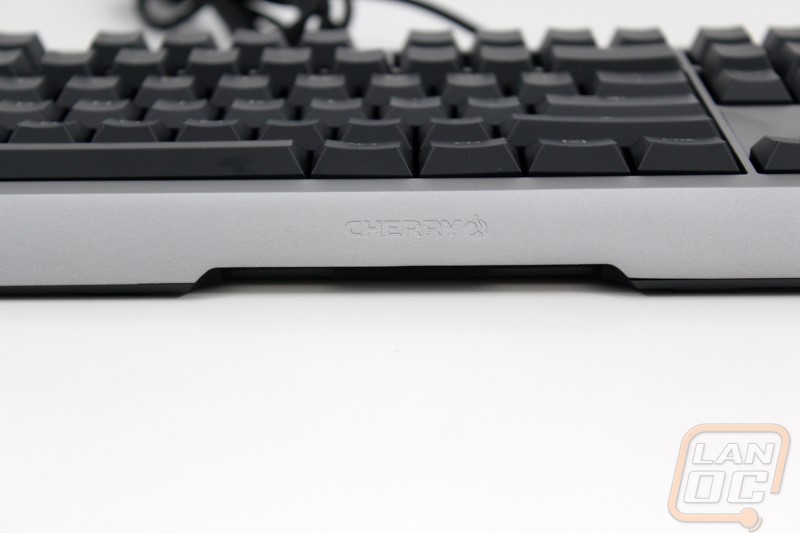 On the back of the MX Board 6.0 we have a lot going on, more than normal. For starters the cable is interesting. It is removable but they have it locked into place so you can’t just swap it out at any point in time. But if your cord does go back it could be replaced. The cord can head out the back of the keyboard or run down the track both down to the left or right side. At the end of the track it is really open, letting you run out the side or turn and go out the top near the side. In the middle of the base there is a large sticker with all of the normal logos as well as your serial numbers and information on Cherry. There is also a nice gold cherry logo sticker that I think covers one of the screw holes as a tamper sticker then of course we have a white sticker on our sample pointing out that this is an engineering sample. For feet there are four rubber feet that run along the bottom edge of the keyboard as well as the two feet on the top. Up top there are also two flip out feet that flip out sideways. They are flat on the end and have a nice feet stuck on their end as well to get the most traction to keep the MX Board 6.0 from moving around on your desk. 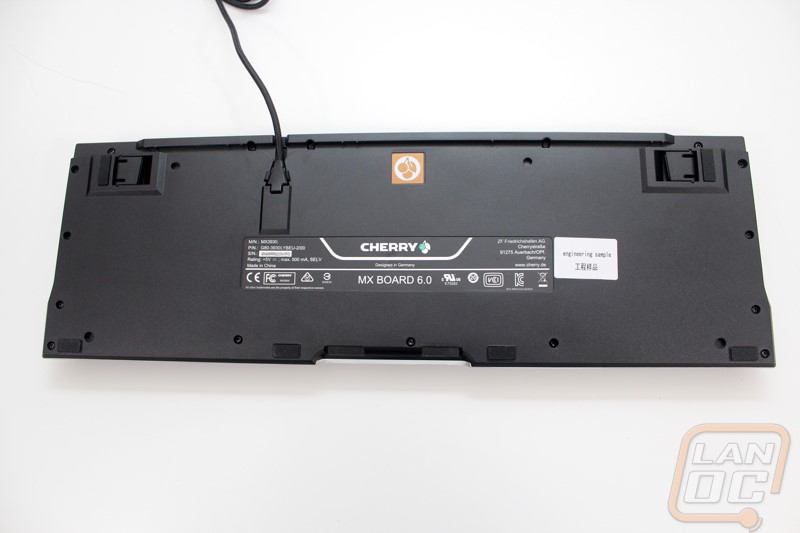 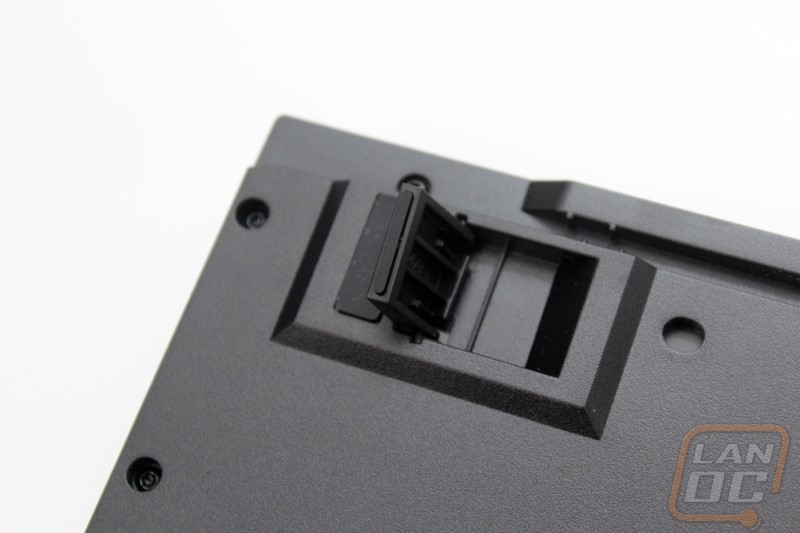 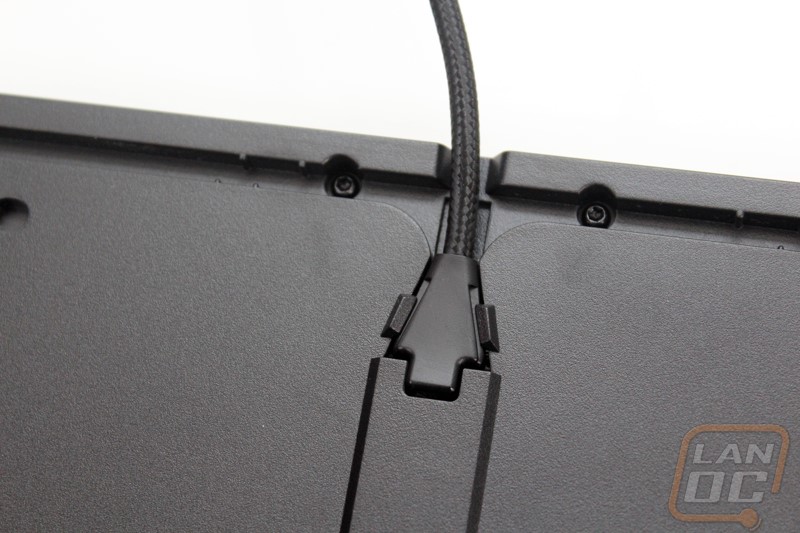 Also on the back down along the bottom edge is a small opening with two magnets in it. This is for the detachable wrist rest. You can just move the wrist rest close and it will snap into place. The wrist rest also have feet, lots of them. You get an additional 10 feet on the bottom of it on top of everything on the keyboard itself. The rest has a rubber coating over the top side and in that rubber they have the letters MX notched into it as well over the entire wrist rest. Down along the bottom of the wrist rest in the middle is a few inch wide silver section with the Cherry logo on it that adds a little style. 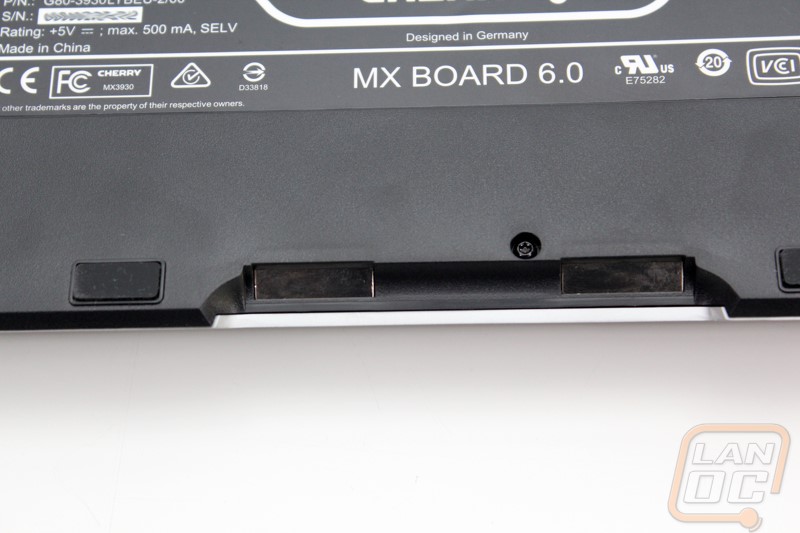 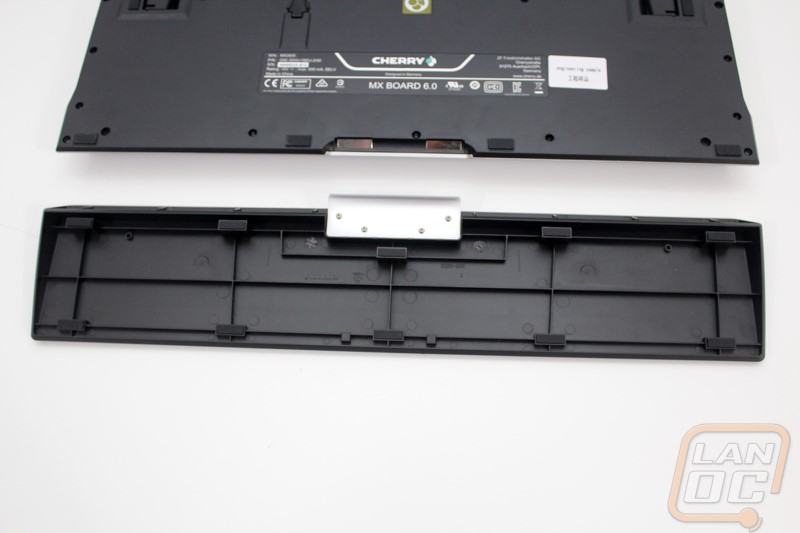 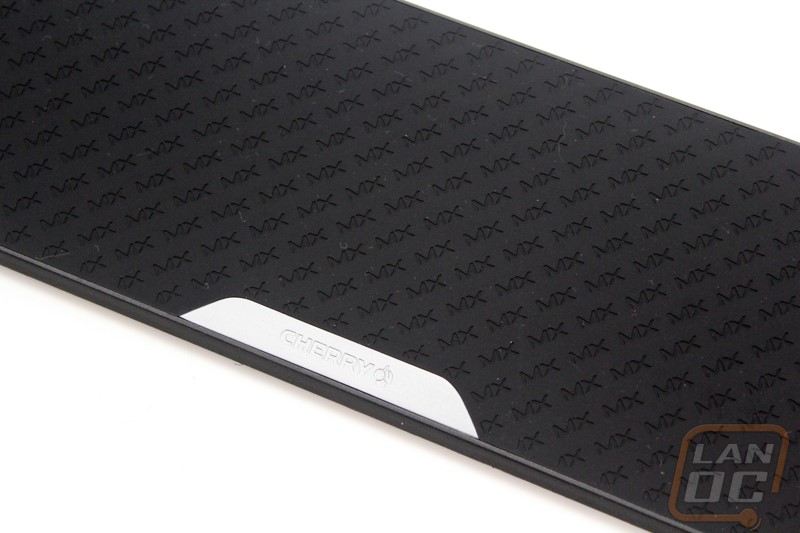 The wrist rest adds a lot to the size of the MX Board 6.0, but it does a great job of smoothing out the difference from the keyboard down to your desk. Not only that but the keyboard looks great with it! 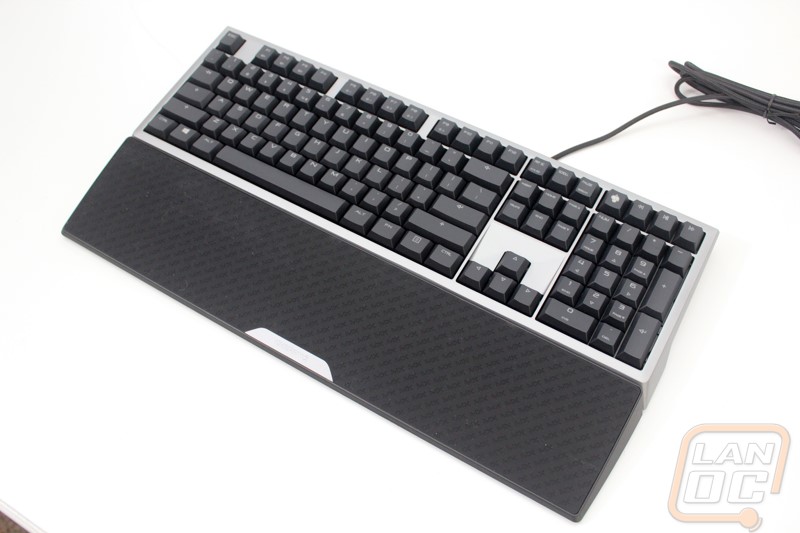 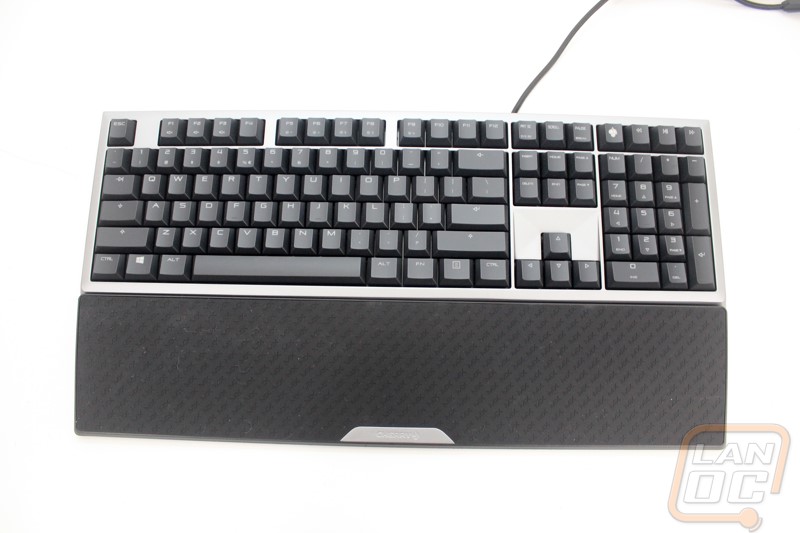 It’s no surprise that we have genuine Cherry key switches seeing as this is a Cherry made keyboard. The MX Board 6.0 will be available with four different switches but ours has Cherry MX Reds. I should note that there isn’t anything different with the key switches for the Cherry RealKey tech, that is all run on the PCB. We can see that they are plate mounted but the plate does have a gap between each key as well. The plate is steel and has a black finish, I’m happy to see that they didn’t try to run a backplate that matches the backlighting or anything like that, the blacked out style looks good here. For stabilizers we have Cherry stabilizers as well. These are my preferred stabilizer because they make swapping out keys much easier. Fighting with the stabs and small stabilizer bar is never fun. I should also point out that the caps lock key (as pictured below) doesn’t have anything weird going on this time. The MX Board 3.0 looked normal from the outside but when you pulled the keycap off the switch was mounted off centered, making it impossible to replace the keycaps on that board without issues as no one makes caps offset like that. While not pictured, under the spacebar Cherry actually slipped in two additional LED backlights to help backlight the long key, this is a crazy detail given the spacebar doesn’t even have a window or legend on it that shows the backlighting at all. 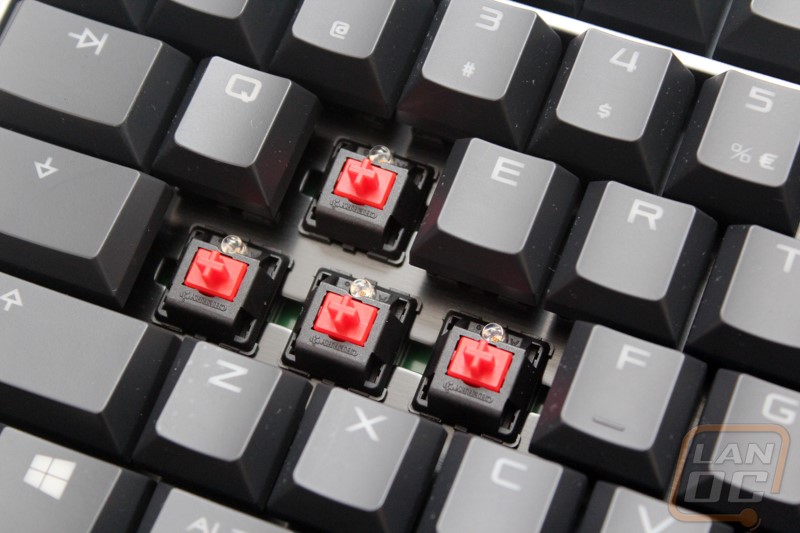 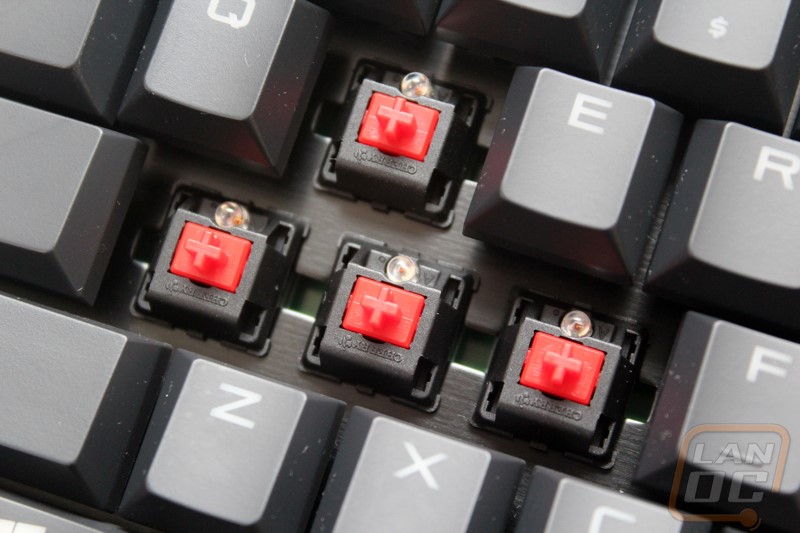 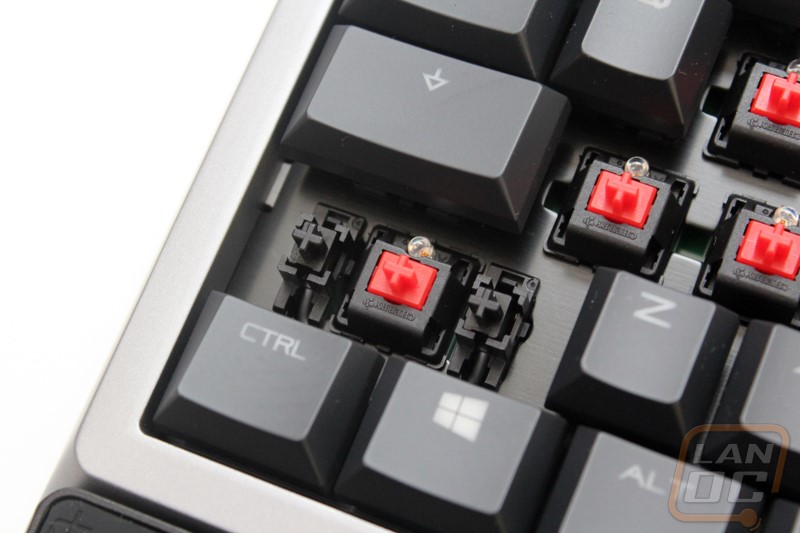 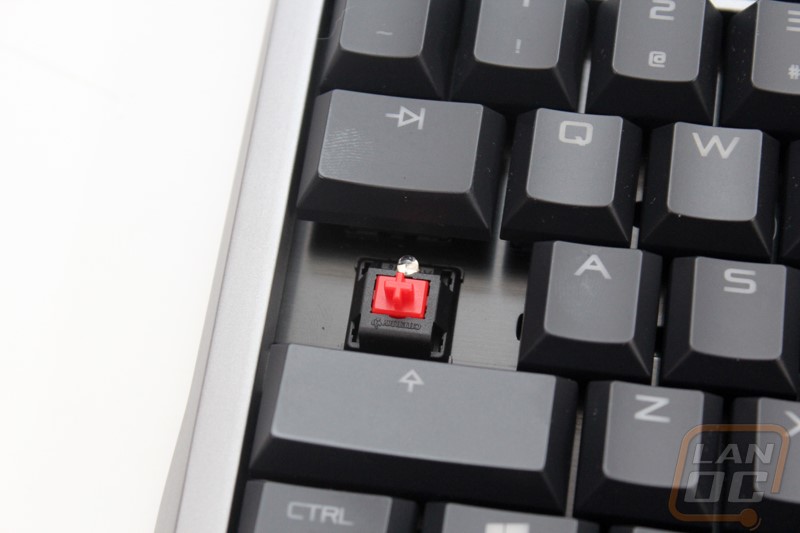 The keycaps on the 6.0 are the standard white transparent with a black paintjob on them to support backlighting. The caps are slightly thicker than normal but not as thick as a set of aftermarket caps. They do seem to be a new profile of cap though. The have a cylindrical shape on the top but the caps themselves are slightly shorter than an OEM profile. They are still noticeably taller than the 3.0 caps though.  From the side profile we can see just how much shorter they are but they do still have a cherry/OEM style side profile with the third row being flat and short, the top two rows being flat and tall, and the bottom three rows are all angled with the angle getting bigger as you get to the bottom row. 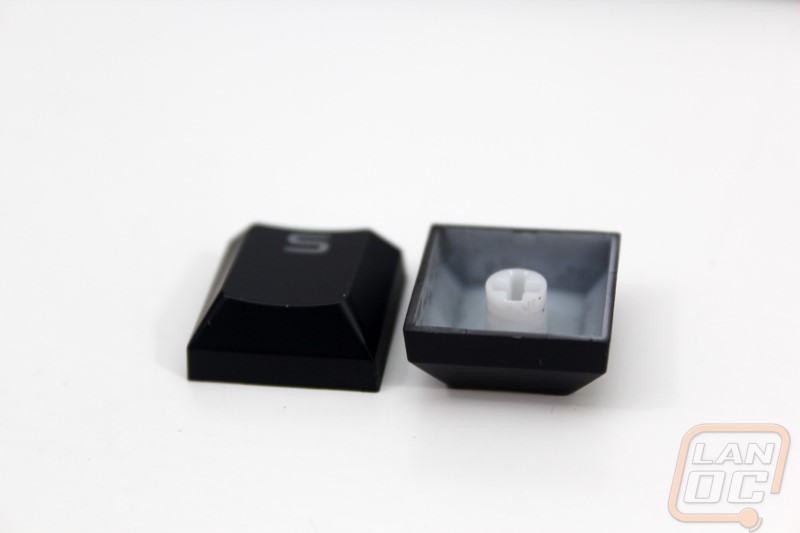 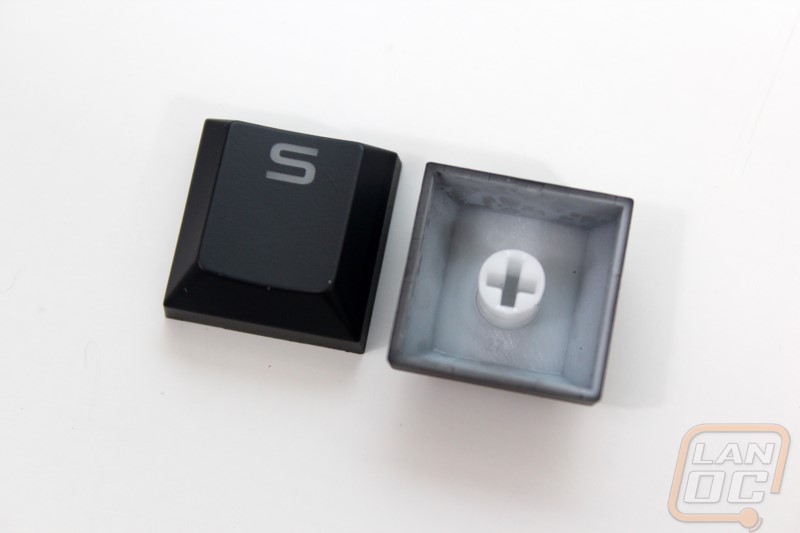 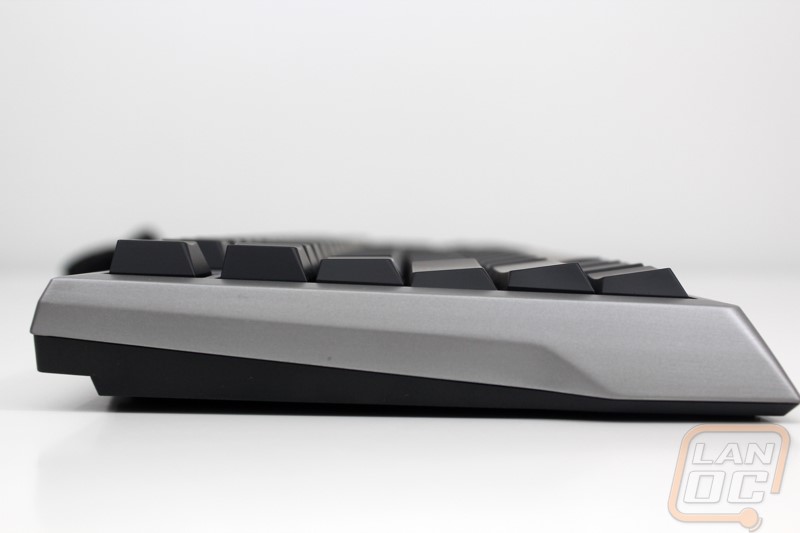 We have 1530 guests and one member online