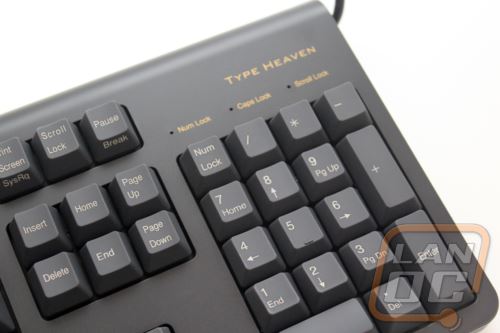 Swapping from the Chery MX Clears and browns that I normally use to the Type Heaven was nothing at all. Everything I love about typing on the clears and the browns is even better when typing on a Topre keyswitch. So there was no surprise that I enjoyed typing on the keyboard. Really the only thing I noticed when moving to this keyboard was the lack of backlighting. This isn’t a complaint because you can’t get backlighting on Topre, at least yet, but it was really the only thing that stood out. The fairly standard layout of the Type Heaven helped with that. I rarely use the few buttons that they changed on the bottom row so that never become an issue. Not having media controls or anything like that was also not an issue because most keyboards only include media controls on a function layer. If I don’t have a volume knob or similar I don’t use them anyhow.

One thing I did notice with the Type heaven and I can’t say I’m all that surprised. The lack of any decent sized rubber feet on the bottom had the keyboard sliding back over time, lucky for me my desk is completely packed to the brim with keyboards currently, but if it had room to move I would most likely have to pull the keyboard back into place after every game or two. Kicking it up on an angle only makes this situation worse as well.

Surprisingly the lack of stabilizers didn’t really stand out at me my Realforce is the same way but I do really like how they handled stabilizers on the Novatouch over not having them at all. The main thing that stood out to me other than the stabilizers and the thinner keycaps between the two was the Type Heaven has a bit of a pingy sound when you type where my other Topre keyboards are more stable and quiet. It’s not too big of an issue but I think it is a sign of a thinner plate/PCB.