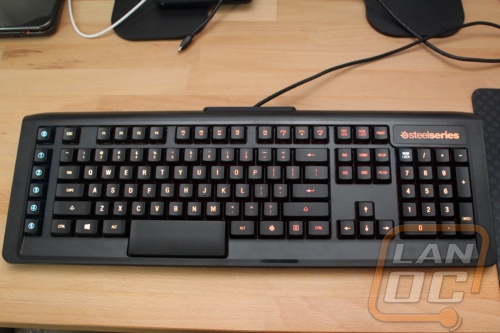 So the Apex M800 is one of the most interesting keyboards I have taken a look at in a long time. Its aggressive styling isn’t exactly what I would go for in my office personally. I would love to see it be a little more muted like the SteelSeries Sensei. That said SteelSeries clearly spent a LOT of time working on this design. They didn’t just grab Cherry MX switches or knockoffs and toss everything together. Their software really sets things apart with more lighting control that I could ever imagine. You can really do anything you want with the backlighting to make the M800 match your style. I didn’t talk about it too much but I like that they included two USB pass-through plugs on the back, as someone with a large desk that keeps their PC a good distance away it is nice to have a few USB plugs right on my desk without having to clutter things up with an extra USB hub.

The new QS1 keyswitches aren’t going to be for everyone. They have a very short throw that is great for gaming but frankly if you are used to a normal mechanical keyboard you are going to have to adjust to the new switches. On the plus side of things I think the M800 is going to be an easy transition for anyone who is coming from a rubber dome keyboard. The short throw and low profile keycaps are basically exactly what you get with most rubber domes. You could swap out the Apex M800 in place of someone’s original Apex and they wouldn’t skip a beat. They would just gain a longer life on the keyswitches and loose a few macro keys.

I did run into an issue where my specific sample actually wobbled on my desk. I’m fairly used to this because my old desk used to be slightly warped, but I’ve never had a keyboard itself be warped before. The box for the M800 had a little damage to it so it is possible that it was damaged. Hopefully this isn’t a bigger issue. Speaking of bigger issues, once I adjusted to the unique design the main issue I had with the Apex M800 is its price. I feel like SteelSeries priced things a little too high compared to the competition.

With an MSRP of $199.99 the Apex M800 is priced well above all of them. I really feel they need to be down at 179.99 as well to really be competing. SteelSeries is known for setting their MSRP high and having a lot of sales, so hopefully we see it on sale for a more competitive price soon. Overall I really like what they did with the Apex M800, like I said before it is a little aggressive for me personally but I felt the same about the original Apex and we see a lot of them at use at our LANs. Hopefully in the future we will maybe see a model with tactile key switches as well. Going off the fact that they ended up calling this the Apex M800 over the Apex Mechanical I wouldn’t be surprised to see more models in the future. 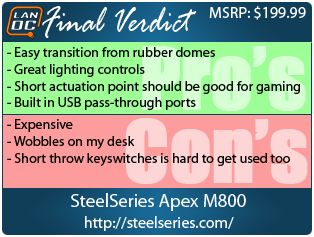 You might call him obsessed or just a hardcore geek. Wes's obsession with gaming hardware and gadgets isn't anything new, he could be found taking things apart even as a child. When not poking around in PC's he can be found playing League of Legends, Awesomenauts, or Civilization 5 or watching a wide variety of TV shows and Movies. A car guy at heart, the same things that draw him into tweaking cars apply when building good looking fast computers. If you are interested in writing for Wes here at LanOC you can reach out to him directly using our contact form.
Discuss this article
Log in to comment
Posts in discussion: SteelSeries Apex M800

We have 1512 guests and one member online