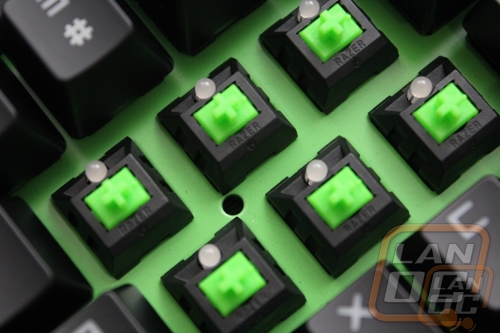 My first experience with a Razer Blackwidow was back with its original model. Between then and now they did make a few changes for the 2013 model as well as this year’s model. Some of the things that are new to me with this keyboard may have been features of the 2013 Blackwidow as well. With that said there are three main changes that Razer has made that stood out to me right away. First, the glossy finish of the original is long gone, the flat finish they have now is a major improvement. Greasy fingerprints will still be an issue, but no more than any other keyboard and way less than the glossy finish on the original. 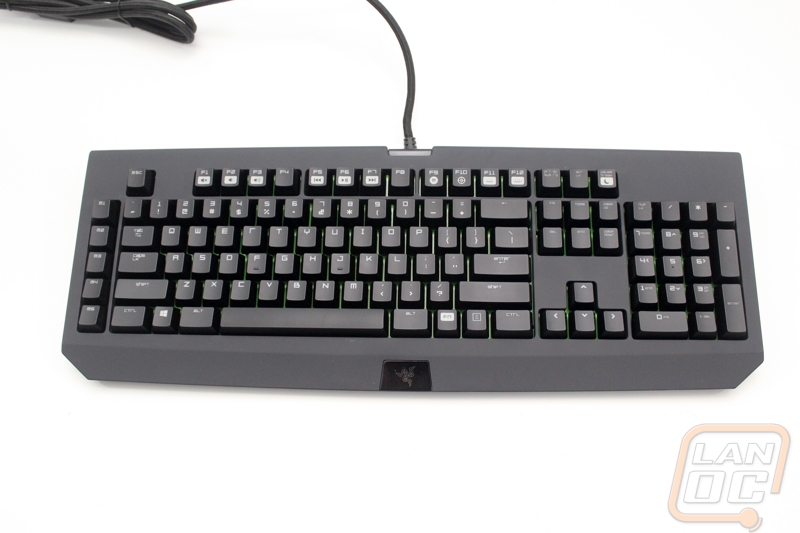 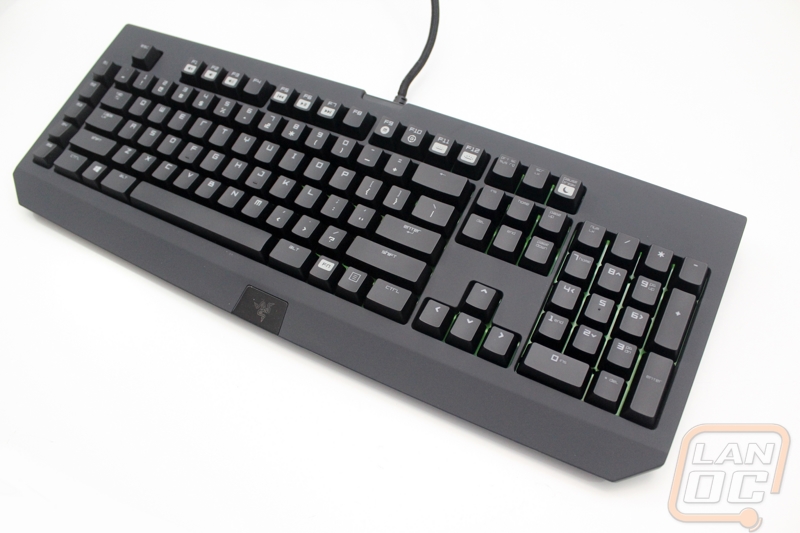 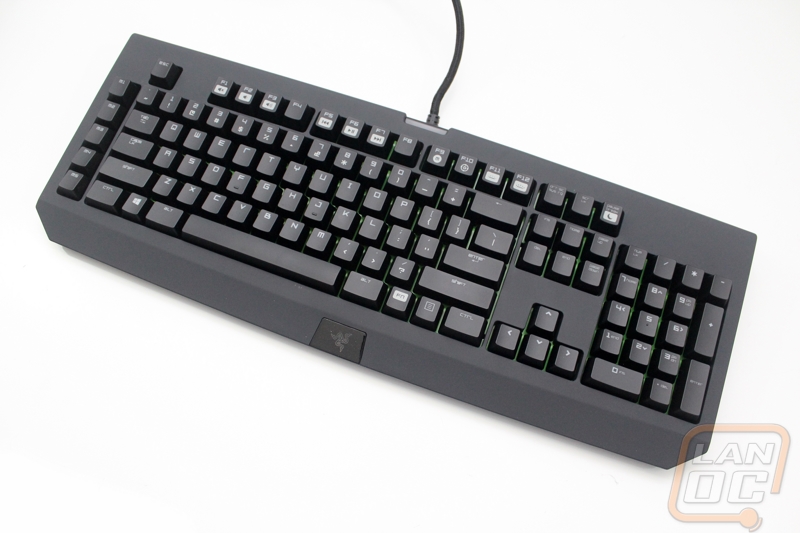 The second completely obvious change was the change from blue backlighting to green. To those following the Razer product line this isn’t a big shock, the rest of their products have it, not to mention the fact that their logo is green as well. The green looks good, but it locks you into the color. I would love to see a few options available or just white backlighting that goes with everything. 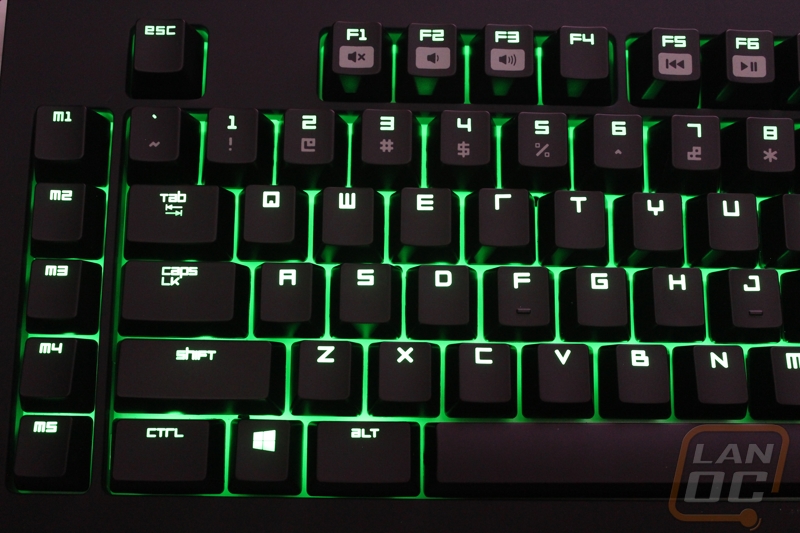 The third major change was the move from Cherry Blue switches to a green switch with the Razer branding on it. This change will be less obvious to people using the keyboard or looking at it without taking a few keycaps off. But even so, it was the only change that made waves with keyboard enthusiasts. I will talk about their performance later in the performance section. But I did include a photo of them below. The design is very similar to a Cherry MX keyswitch, so much so that I would bet that the PCB of the Blackwidow didn’t change nor did the keycaps because this switch has the same cross keycap attachment as a Cherry MX. The Razer logo is on each keyswitch but if you look close you can see a small logo under it. This is for Kailh, the real manufacture of the switches. Kailh doesn’t exactly have the best reputation in the keyboard enthusiast community, but the evidence posted is always the same single image of a broken switch. I would prefer to judge for myself. Anyhow, we will look at that more in the performance section. 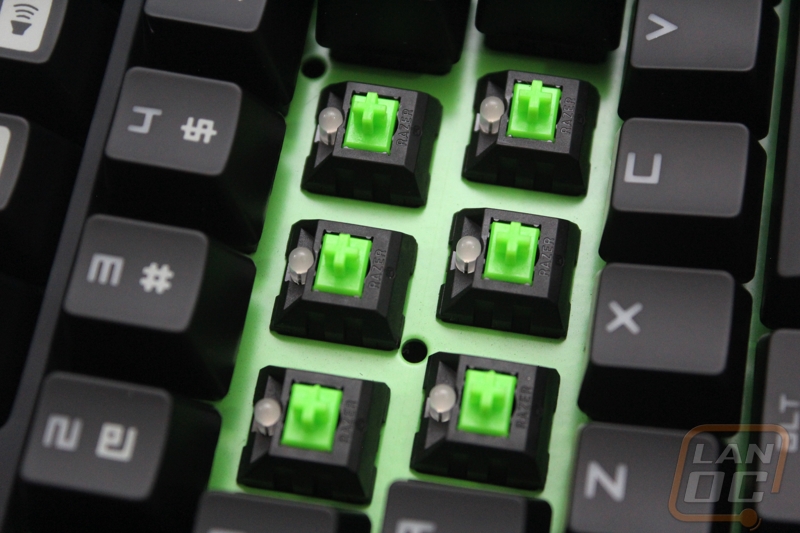 Considering the backlighting, it’s wasn’t a big surprised when I took a peak at the back of the keycaps to find that they are transparent white keys with a black paint over top. To add to this point, I’m also not a fan of the font they use for the entire keyboard. It does fit the Razer “theme” but it does take a little adjusting to get used to it. When I took off some of the keycaps for photos it took me a second to tell the difference between the W and E keys because the W doesn’t have any angle to it (M looks the same as well). It was the same with the number 0 and the letter O, Q is also almost exactly the same as well. 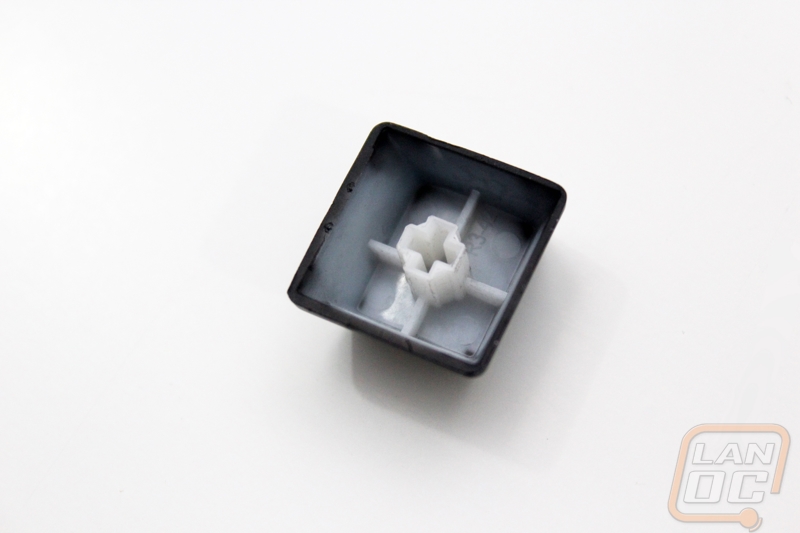 The Blackwidow does have the same five programmable macro keys over along the left side. As someone who doesn’t use macro keys to often, I am happy that they didn’t go overboard with too many on the Blackwidow. 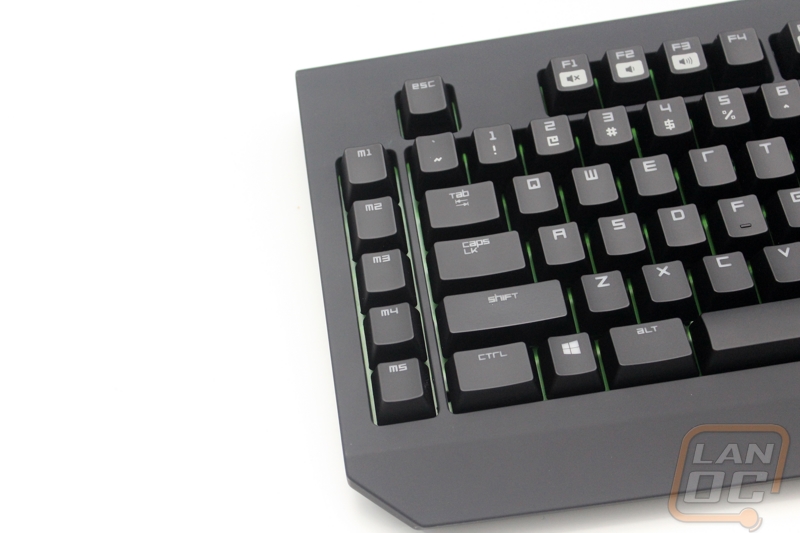 Up along the top, the F keys all have a second set of functions. F1 to F7 are volume and media controls while F9 to F12 control backlighting, turning “gaming” mode on and off, and a button for on the fly macro recording. Each second ability requires you to use the function key along with it. I don’t mind it for most of the options, but I would love to see a volume control built into the keyboard. 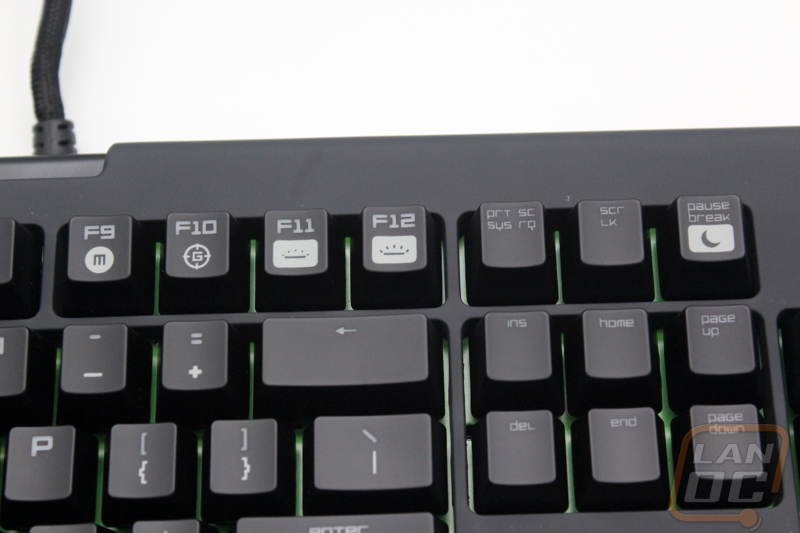 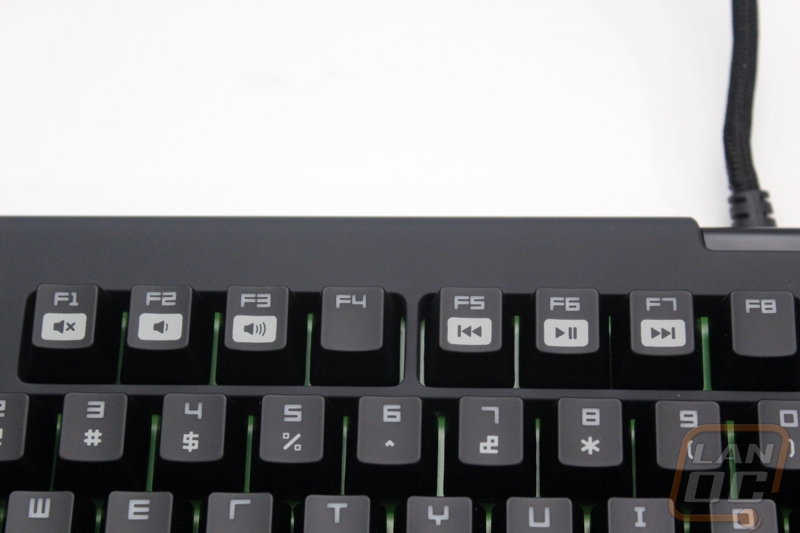 Looking from the side, you can see that the key profile has more of a curve to it than most mechanical keyboards on the market as well. 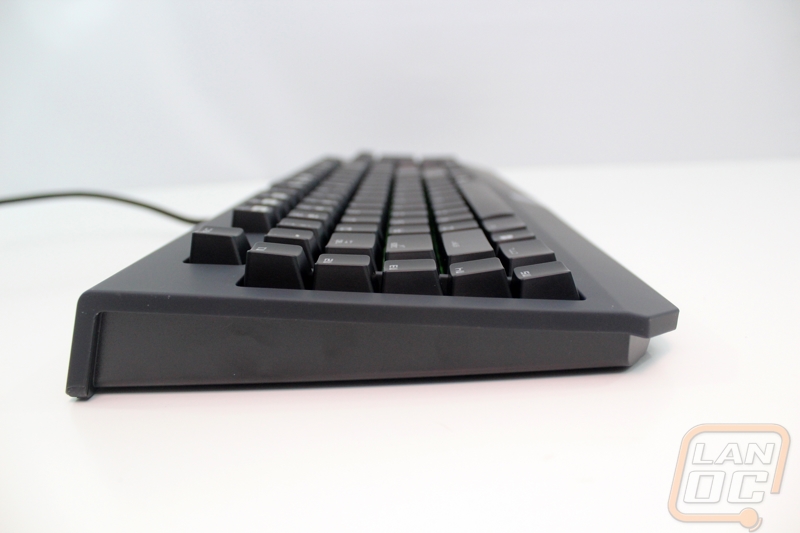 The Blackwidow’s cord starts off as a bundle and breaks up into its four individual cords about a foot from the end. Typically bundled cords are hard to work with, but this one was very flexible and not to thick. 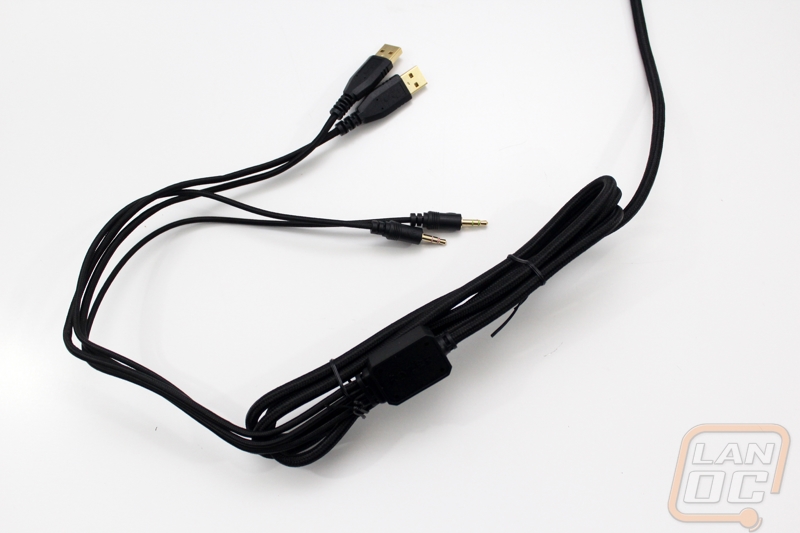 With everything powered up, I could finally see the Razer logo down along the wrist rest with its green glow. This is the only Razer branding on the keyboard, although to be fair the bright green lighting and font both scream Razer as well. 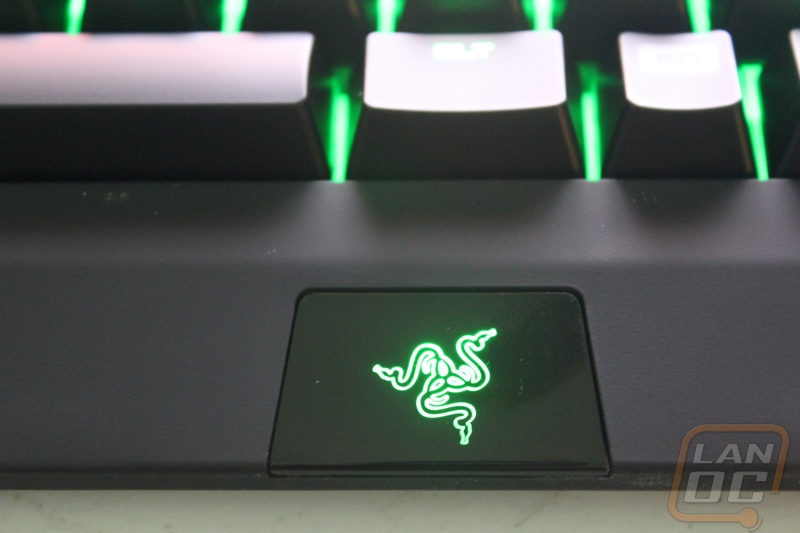 I mentioned the gaming mode before. Up above the number pad you will find all of your notification lights, when they are turned on. Here you can see the gaming mode light as well as the small number lock night. When the lights aren’t on this area looks like any other part of the keyboard with its flat black finish. 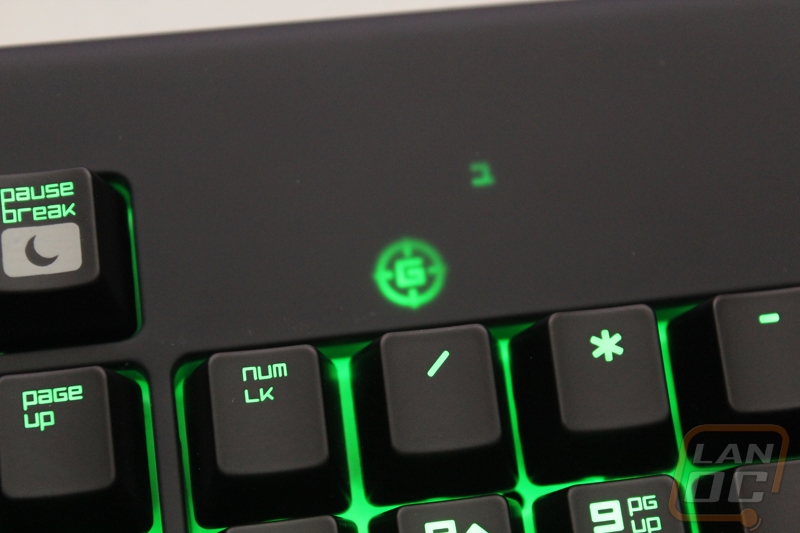 garfi3ld replied the topic: #34567 31 Mar 2014 12:12
I hope everyone had a great weekend. I spent a little time gaming with friends (although I still didn't get to hang out with everyone I wanted too). To start the week off right I have a review of the new Razer Blackwidow with their new key switches. Check out what I thought of them inside.