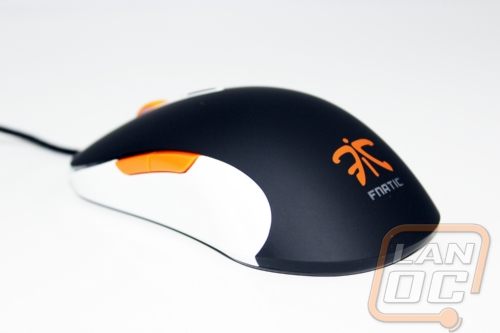 When someone asks my opinion on a new gaming mouse, I always have to include a SteelSeries Sensei in that short list. Hard core mice enthusiasts will mention that it doesn’t have a “flawless” sensor, but most users would never spot the difference. More importantly, the Sensei has a shape that most absolutely love and you are also getting their SteelSeries Engine software. Those who know me, know I’m a sucker for orange, when I saw the Fnatic Sensei I had to have one to match my orange Siberia v2 headset.

First things first, between the original Sensei, the Sensei RAW, the Xia (that the Sensei is based on), and game mice that are based on the Sensei RAW, I have looking at the performance of this mouse countless times. Rather than repeat myself again. I would rather link all of our previous coverage and focus more on the aesthetics of the Fnatic version. Because of that there isn’t a performance section this time around.

The packaging for the Sensei Fnatic follows the same styling as previous SteelSeries mice, with the black and grey background. You do get a good photo of the mouse itself right on the front along with a Fnatic Limited Edition logo up in the top right corner. You can open the front of the box up and actually get your hands on the mouse to get a feel for its shape and size. Inside there is also a little section talking about Fnatic itself just in case you haven’t heard of them. 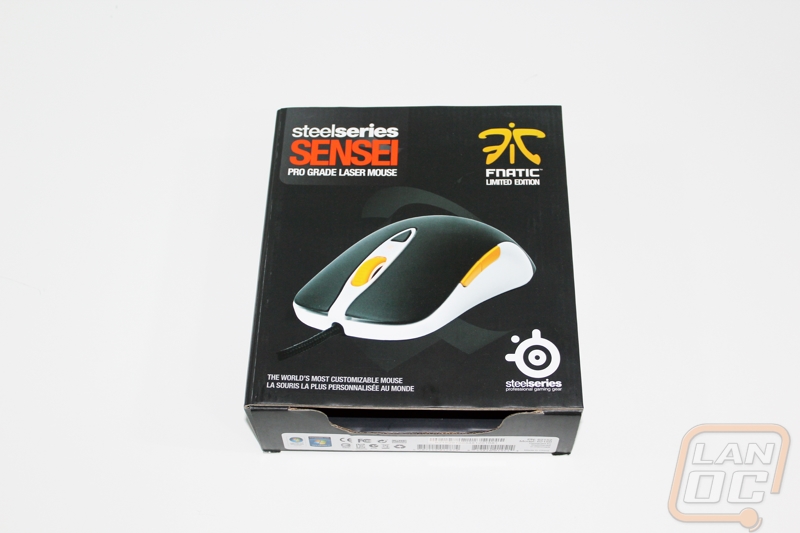 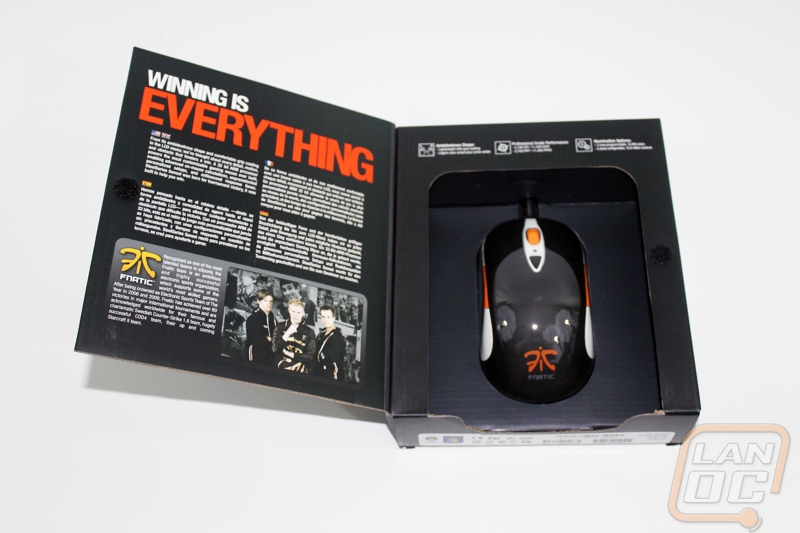 It is around on the back of the box that you will really find more about the mouse itself. SteelSeries has highlighted a few of its key features and put them in four different languages. There are a few photos of the mouse as well including pictures of the LCD screen on the bottom of the mouse that you can’t see through the front window. Up above the photos they also slipped in a specification listing as well something you rarely see on mice. 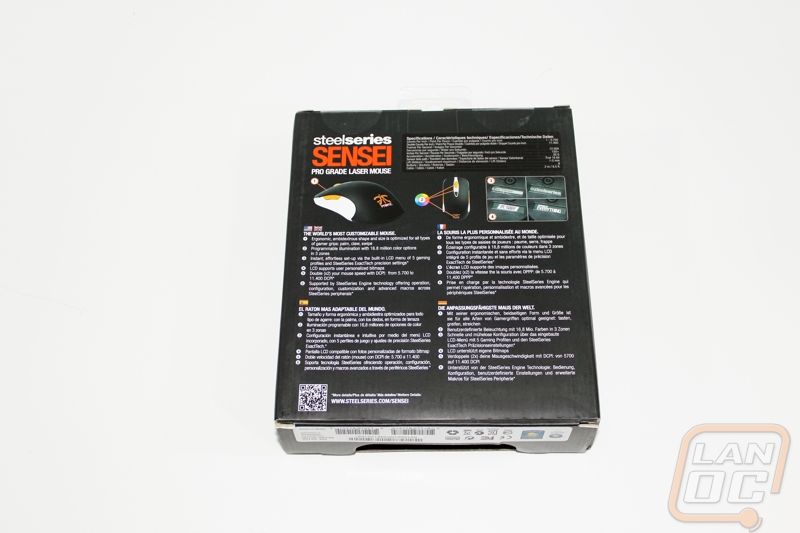 Inside, along with the Sensei Fnatic, you also get a quick start guide, a small info packet about SteelSeries, and a SteelSeries sticker as well. 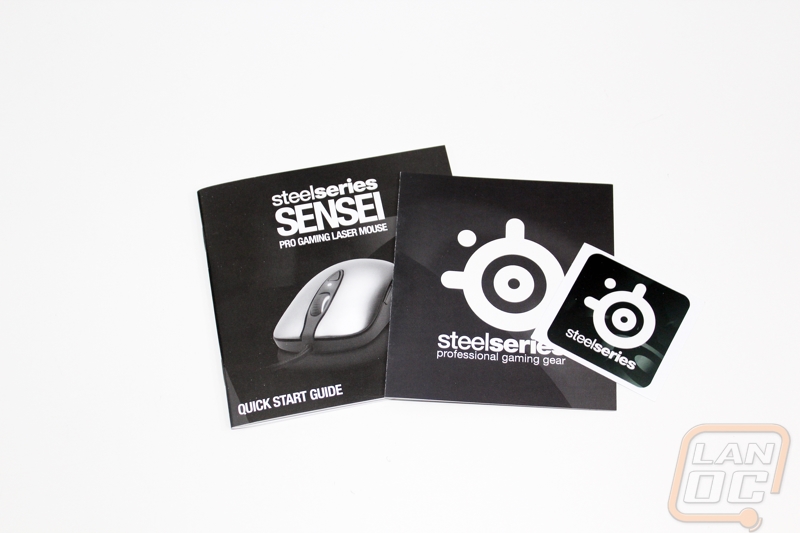 I would really love to come in here and say that SteelSeries went all out with a completely new design for the Sensei Fnatic, but the reality is this is a standard Sensei with a little more styling. That styling is going to be more attractive to you if you are a Fnatic fan specifically. Lets take a quick look around the mouse and see what they did differently. 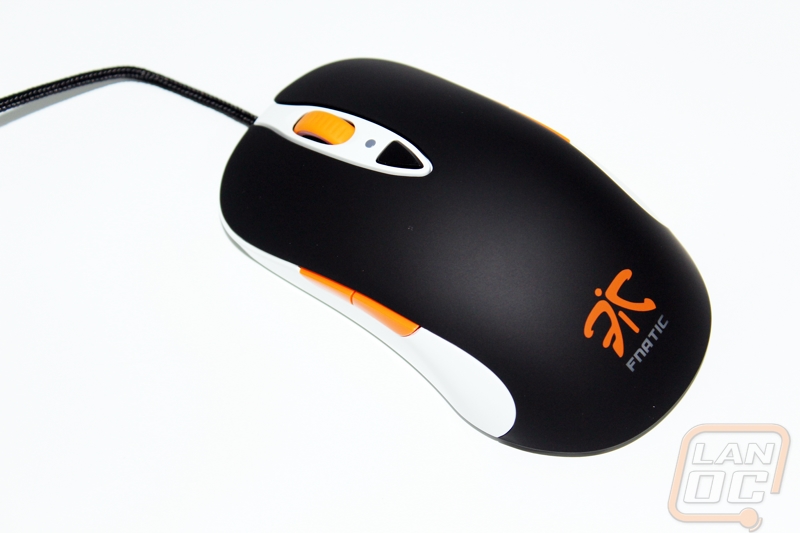 Starting right on the top of the Sensei Fnatic, you have a flat black finish that covers the top panel from the back of the mouse all the way across both triggers. To break up that black, right in between the triggers you have a white strip with a bright orange scroll wheel. I have a feeling that I don’t have to remind you guys that I love orange, so this black/white/orange combo caught my eye right away. Function wise nothing has changed from a traditional Sensei though. You still have a button to swap between two different DPI’s as well as an LED to let you know which of the two settings you are on. 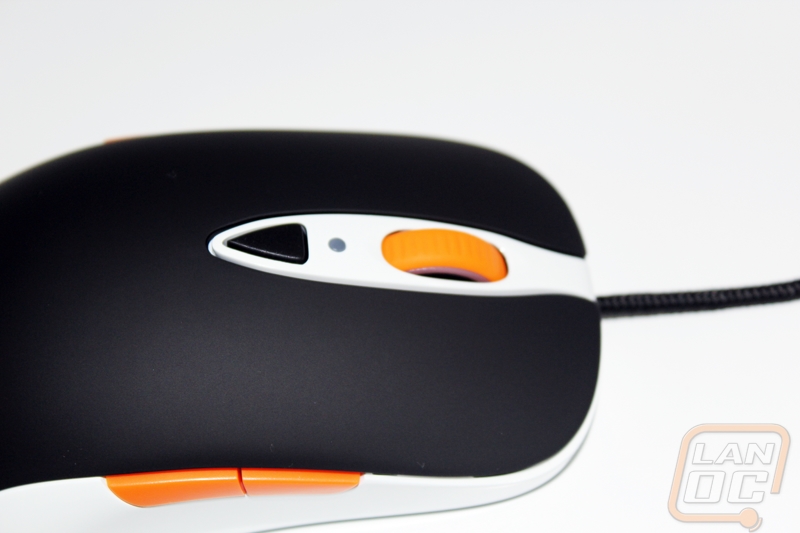 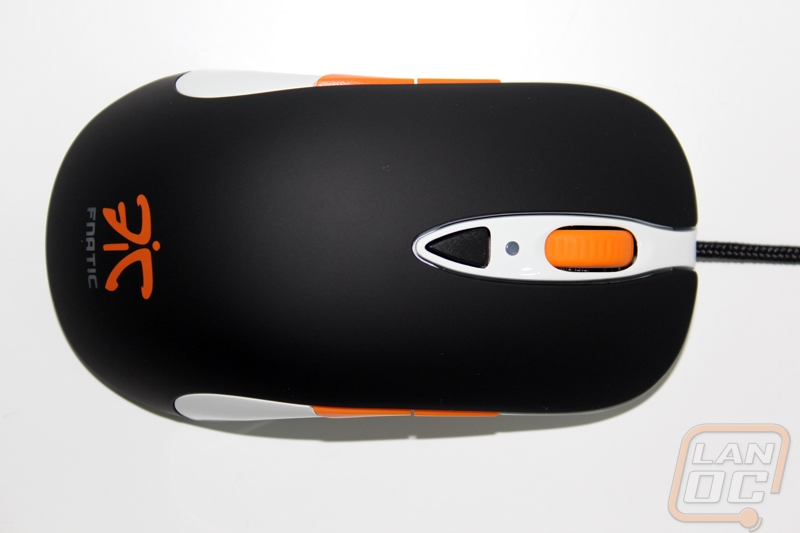 That white finish actually goes around the front of the mouse and to both sides of the mouse. The white finish is more of a glossy finish where the top black was flat. Both sides of the Sensei have two programmable buttons and the Sensei Fnatic isn’t any different there. Much like the top they finished the buttons off in a bright orange. This orange is actually a nice pearl, you can see the colors are a little different in each photo. The white and orange on the sides brings together the triple color combo from the top of the mouse as well giving it that “Fnatic” look. 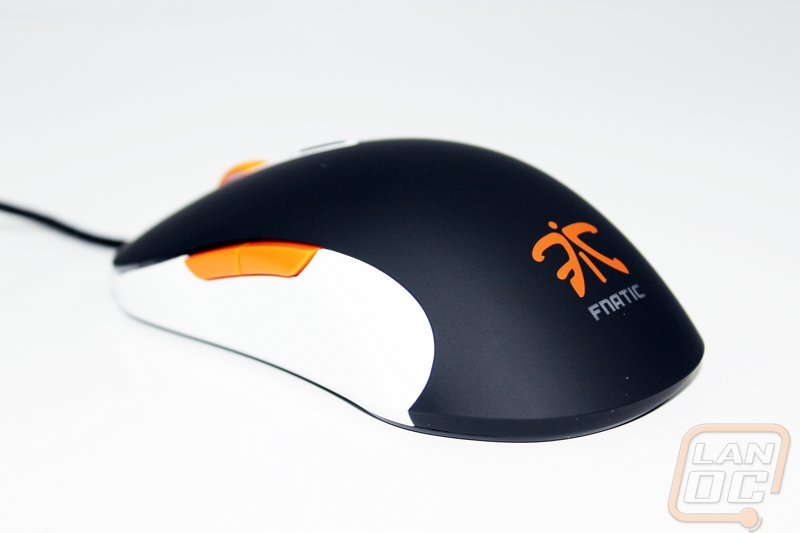 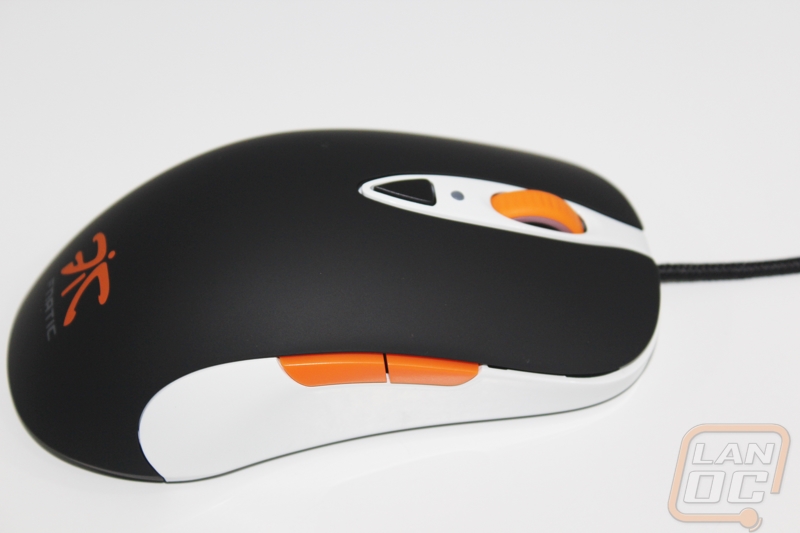 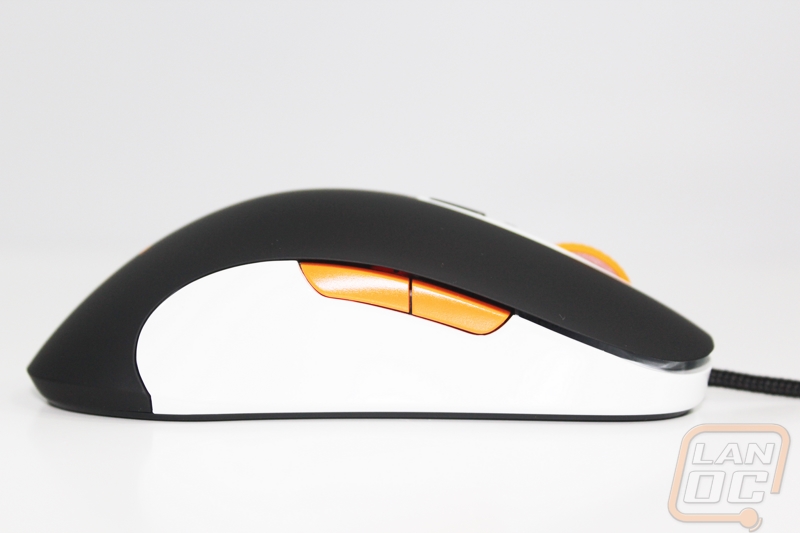 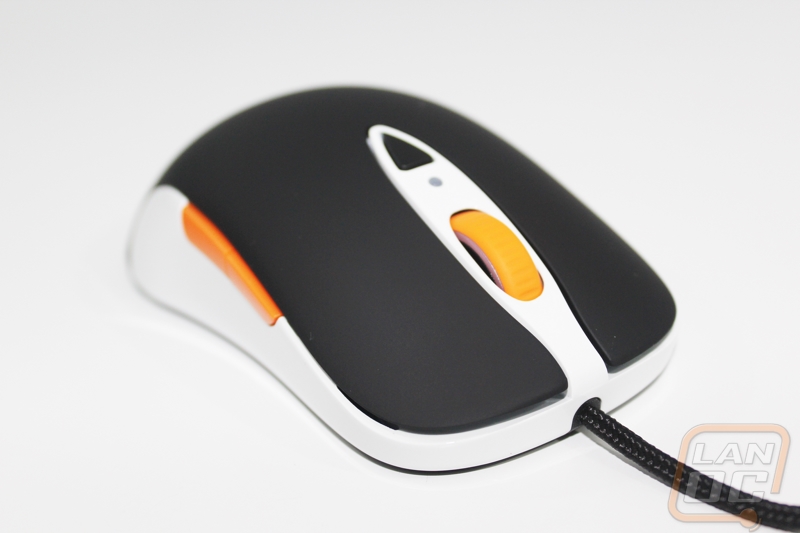 Really the only branding visible on the mouse is the Fnatic logo on the back of the mouse. This is where the SteelSeries logo was previously. It’s a little weird that there isn’t a SteelSeires logo visible, but I think most people will recognize the shape of the Sensei by now. 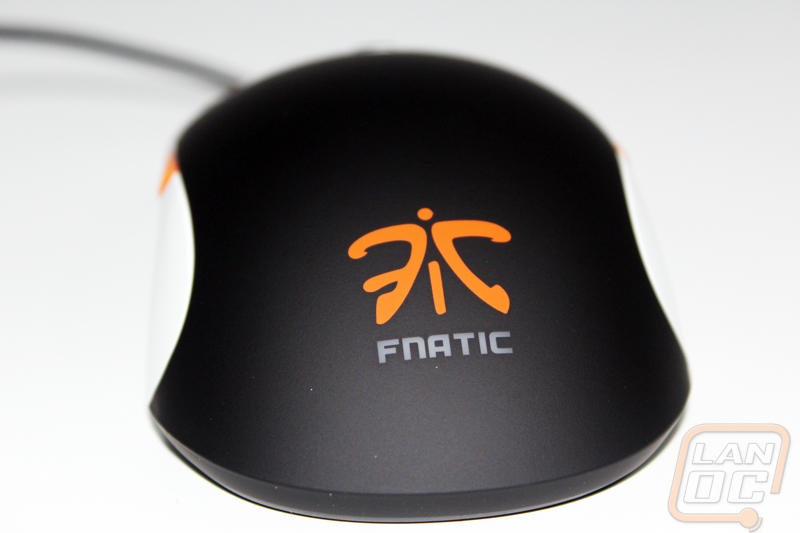 On the bottom the only thing that has changed is the Fnatic logo on the bottom. You still get the same LED screen that lets you adjust your settings on the fly without software. This was a bit of a surprise to me, some of the Sensei and Sensei based models have dropped this feature to keep the costs down. I’m curious if this was a feature that the Fnatic team wanted to keep. 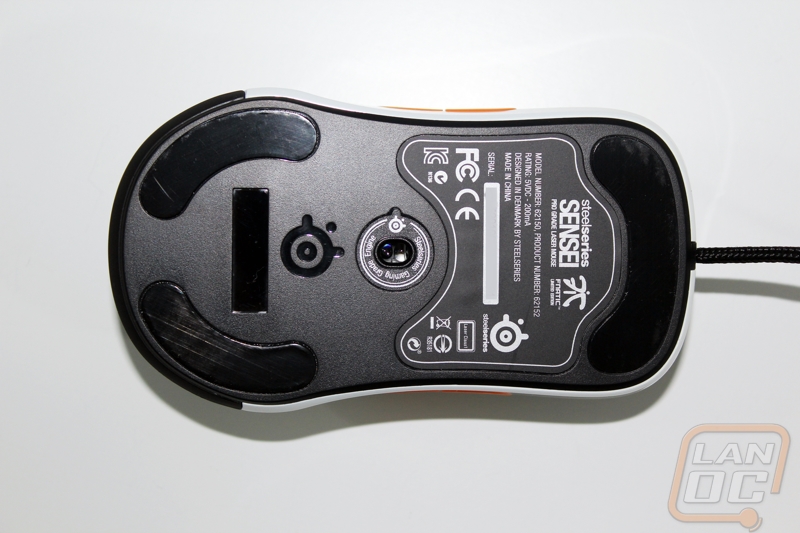 SteelSeries didn’t go with anything special when it came to the coloring on the USB cable. I expected to see small touches of orange or something similar like we have seen on other SteelSeries mice but they went all back this time around. You still get a cable that is if anything longer than you should need with gold plating on the USB connection to assure a long life. 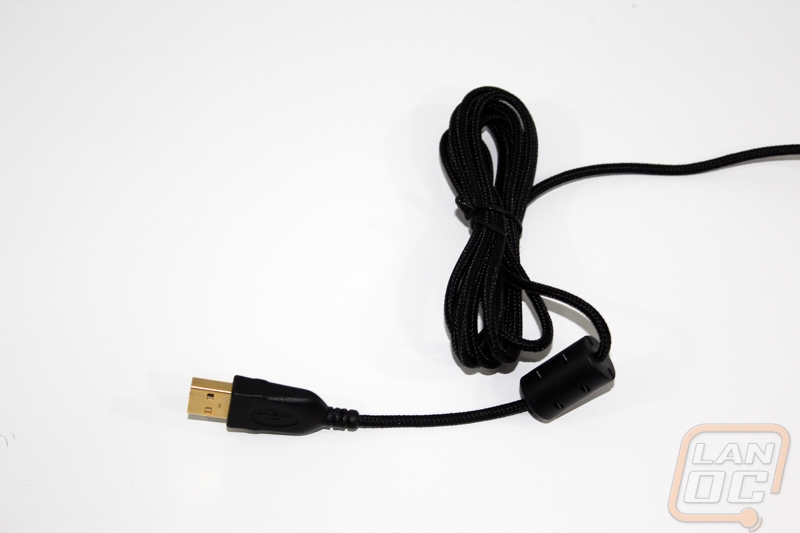 Here we can see the Fnatic Edition up next to a standard Sensei. The difference in finish is even more noticeable when you see them next to each other. You can see the oil, finger prints, and dust the standard Sensei gets while the Sensei Fnatic Edition is a little less sensitive to the overall oil and dust but the Fnatic Edition can still have issues with oil. You can also get a good look at the differences in lighting between the mice. The original Sensei has the light up SteelSeries logo on the back that can be changed to any color while the Sensei Fnatic has a smaller area that lights up and it only glows in the teams orange color. For me that isn’t a big deal, as you can see my original Sensei also sports the orange. I do wish they would have lit up the entire logo though; it’s a little weird with it just being a small portion. The orange scroll wheel also puts out its fair share of lighting as well, as you can see in the second photo below. 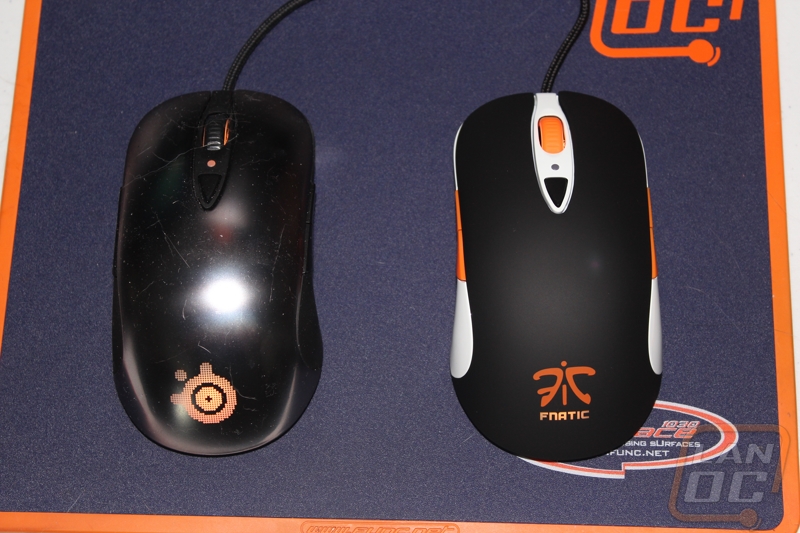 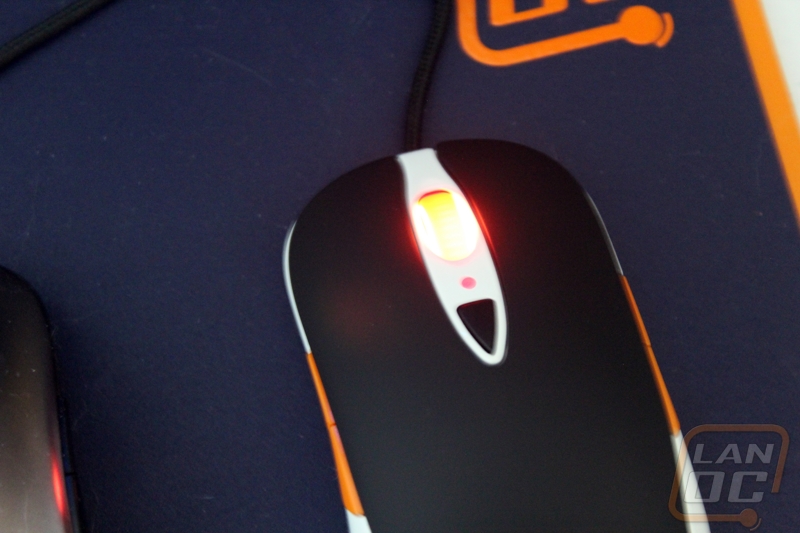 Let’s be honest, the Fnatic Sensei is going to have a fairly small target audience. You are really going to have to be a Fnatic fan to be interested, unless the color combination really catches your eye. Even so, Fnatic covers a large audience for a pro gaming team. They have teams in professional play in League of Legends, Dota 2, Counter Strike: Global Offensive, Starcraft 2, ShootMania, and they even have a player in the Fighting genre. Other than fighting, they can all put a kick ass mouse like the Sensei to use and they all have their fan base. After watching Fnatic play this year at worlds, I have a new appreciation for their gameplay and followed them closely for the entire event. It helped that I had their mouse right in my hand at the time. Even without all of that, I really am a fan of the white and orange highlights on a flat black mouse. I would have this on my list for that reason alone. My only complaint really is how only a small portion of the logo is backlit. You know I’m grasping at straws when I’m complaining about something that you will never see while the mouse is in your hand. So if you are a Fnatic fan or a fan of orange like me, you now have another awesome option for your next mouse.

You might call him obsessed or just a hardcore geek. Wes's obsession with gaming hardware and gadgets isn't anything new, he could be found taking things apart even as a child. When not poking around in PC's he can be found playing League of Legends, Awesomenauts, or Civilization 5 or watching a wide variety of TV shows and Movies. A car guy at heart, the same things that draw him into tweaking cars apply when building good looking fast computers. If you are interested in writing for Wes here at LanOC you can reach out to him directly using our contact form.
Discuss this article
Log in to comment
Posts in discussion: SteelSeries Sensei Fnatic