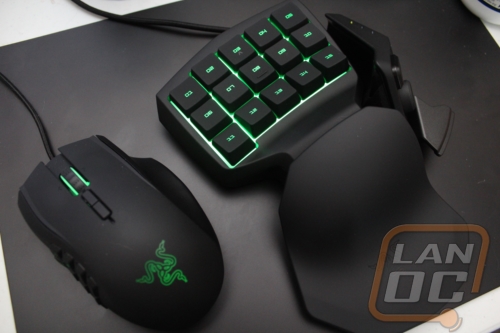 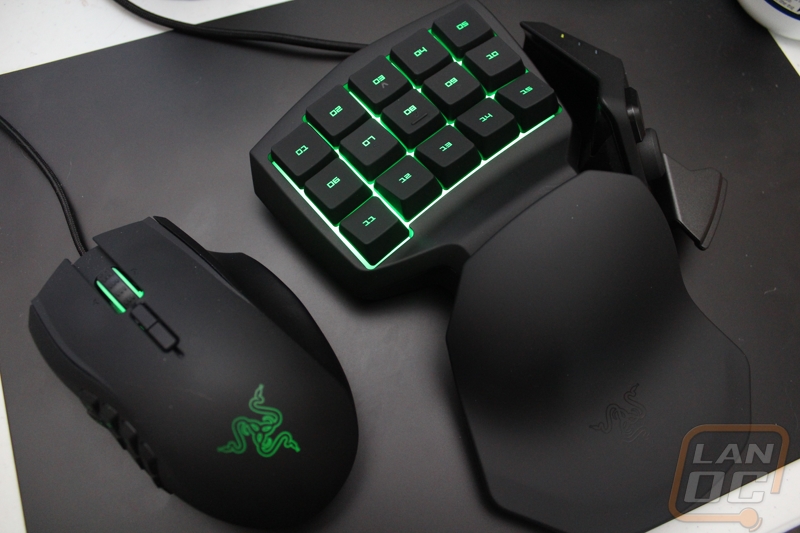 The Tartarus is an interesting product. In a lot of ways Razer combined the old Nostromo with the Orbweaver to create the Tartarus. You lose the mechanical switches and a whole row of keys but you are getting some of the adjustability that the Orb Weaver had as well as the same ergonomics. They also share the same software. All at a price point that is a little closer to being in reach for the average gamer. Because of that most of my issues with the Tartarus are the same as with the Orbweaver. The fact you need to log into the software while being online is frustrating as well as it making you reboot. The green backlighting looks amazing, but I know that a lot of people want something that matches the rest of their PC and not everyone is running green. Other than that there is just one other issue I have with the Tartarus, its name. It took me a long time to get used to the Nostromo name and now they have changed it to something that is somehow even harder to say.

The benefits to the Tartarus do make up for the downsides though. I love the adjustability, getting a gaming keypad that fits you can sometimes be hard because there aren’t many options on the market. Adjustability should help it fit more people. I may have complained about the green backlighting, but one thing is for sure no one is going to complain about the backlighting being too dim. The Tartarus’s backlighting when turned all the way up is just crazy.  The same goes for the software, I did have complaints about it, but I have to admit it is packed full of all of the features I would want or need and then some. Lastly, the new flat finish is a major improvement over the Nostromo’s glossy finish, no more greasy fingerprints.

While the gaming keypad market has to be a small one, there are still a lot of people who do utilize them. I’m happy to see that Razer isn’t just leaving well enough alone. The only problem I foresee really is that most people who like using a gaming keypad are already using one, I’m not sure if the improvements will be enough to interest them into getting a newer model. 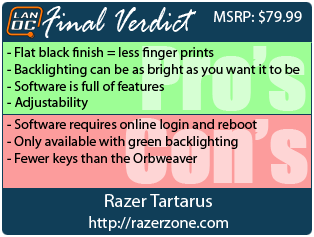 You might call him obsessed or just a hardcore geek. Wes's obsession with gaming hardware and gadgets isn't anything new, he could be found taking things apart even as a child. When not poking around in PC's he can be found playing League of Legends, Awesomenauts, or Civilization 5 or watching a wide variety of TV shows and Movies. A car guy at heart, the same things that draw him into tweaking cars apply when building good looking fast computers. If you are interested in writing for Wes here at LanOC you can reach out to him directly using our contact form.
Discuss this article
Log in to comment
Posts in discussion: Razer Tartarus

We have 1616 guests and one member online