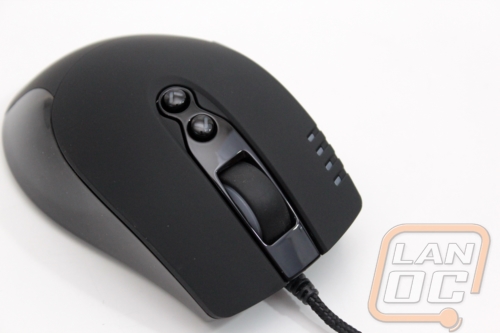 Between sensor, grip style, and overall design the CM Storm gaming mouse line is made up of a nice variety of options. Until now, Cooler Master has only offered one product with the Avago 9800 sensor, boasting 8200 DPI support, the Sentinel II. The Havoc, which we’ll be taking a look at today, is “designed for precision gaming”, so it seems natural to be equipped with a sensor that provides such a diverse range.

The Havoc’s retail packaging follows the CM Storm branding religiously, almost mimicking the Sentinel Advanced II with a swapped mouse image. Each of the mice so far at least seems to have a unique logo, a metallic font accenting the V for the Havoc, subtitles with the DPI range it is capable of. The package opens book style to preview the mouse in a plastic window for shoppers to hopefully get a quick idea on the form. The inside cover also calls out the features of the mouse. The Havoc’s plastic home slides out of the box with some light documentation. 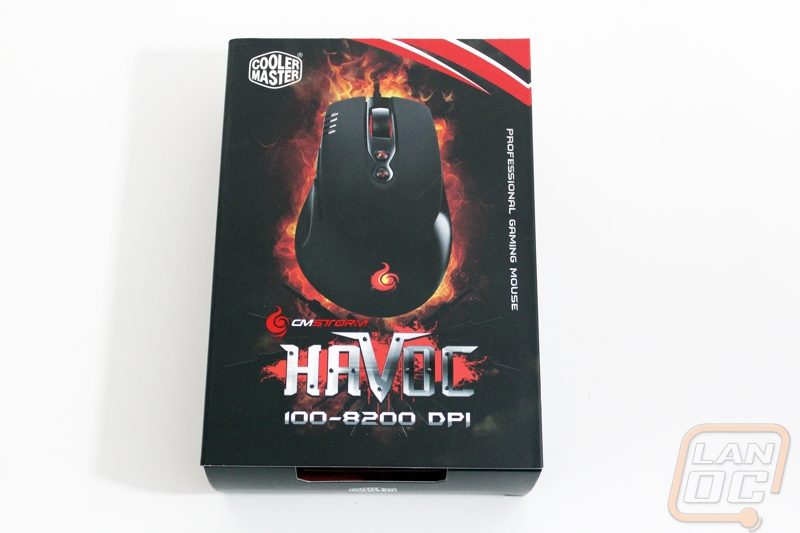 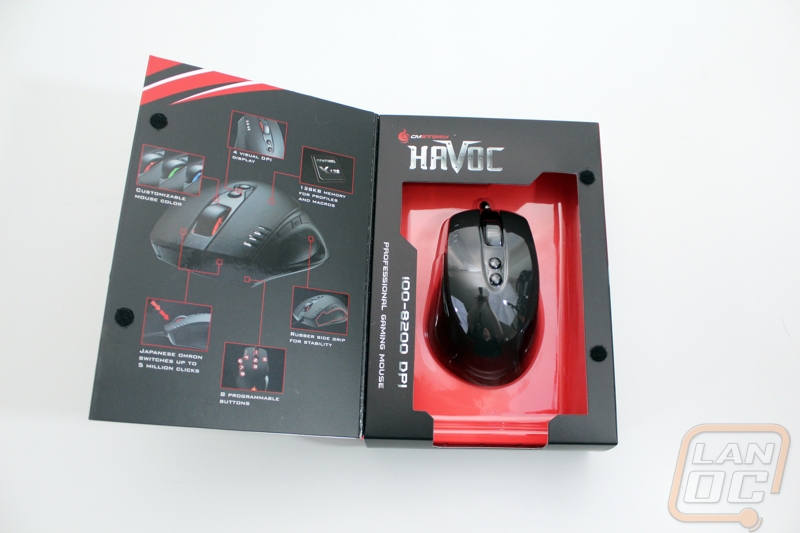 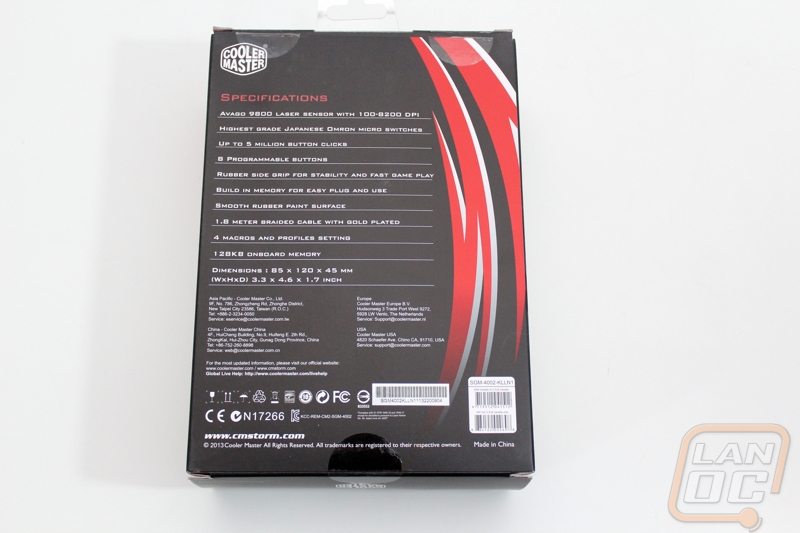 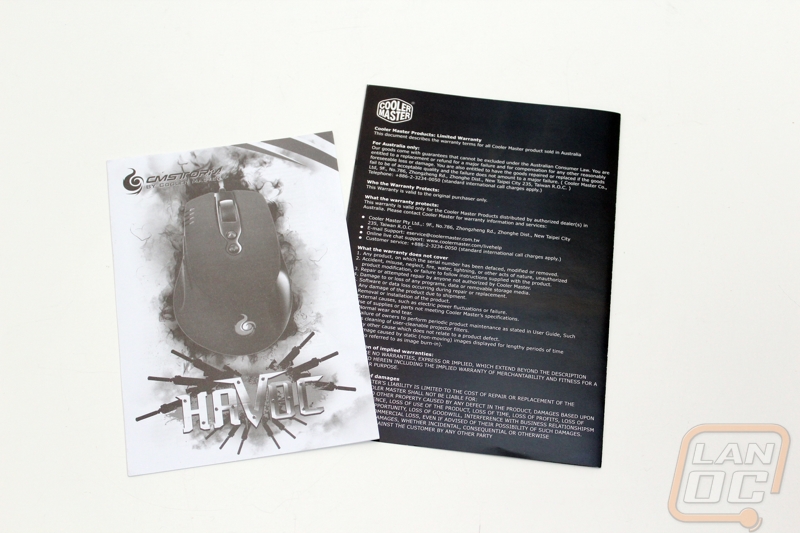 The software for the Havoc is a unique suite designed just for this product. Given that Cooler Master has a range of peripherals including keyboards, mice, and head sets, it’s a shame we haven’t seen them create a master software solution that handles them all, much like Logitech, Razer, and Steel Series. The install only takes a few moments and doesn’t require any sort of system restart. Booting it up for the first time will look familiar for anyone who has used a CM Storm product before.

We’re first greeted with the ‘Main’ window, a virtual image of the Havoc with a corresponding legend identifying each button and the action assigned by default. Along the bottom, you’ll notice a list of profiles beginning with the default Havoc profile, then 1 through 3. The assigned actions for the default Havoc profile are not editable, so in reality you only have three to play with. Since Cooler Master lets you re-assign all face buttons, including left and right click, having a locked default to resort to is actually a good idea (as another fail-safe, the software won’t let you remove the left click function from the left click button until you assign it to something else). As you’ll quickly gather, you are able to upload a custom image with a resolution of 42x42 pixels similar to the Havoc logo in the default. 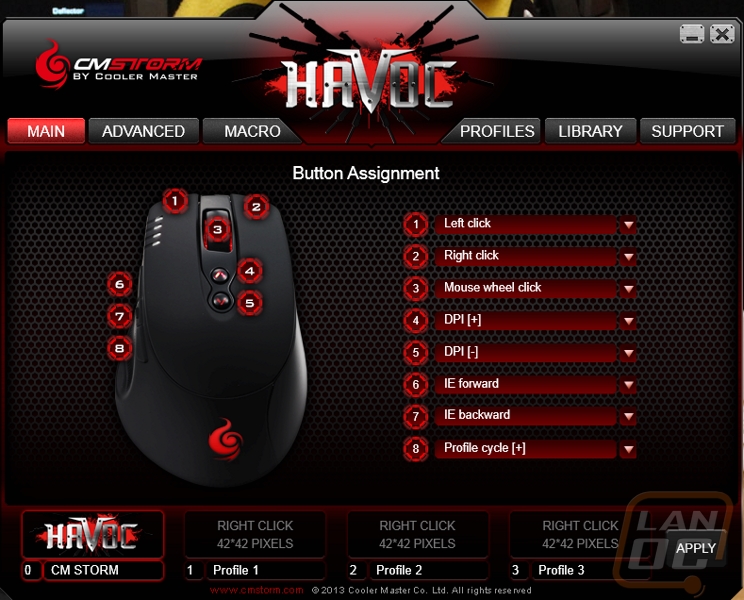 Assigning a new action is achieved with a drop-down menu listing alternate operations, such as IE or Multimedia, the popular Rapid fire options, macros, profile and DPI cycling, or even the ability to turn the sensor of the mouse on and off.

The next window, ‘Advanced’, allows you to set the DPI levels, polling rates, and LED mode/brightness. It also provides a section to adjust operating system-specific details such as sensitivity and double-click speed. 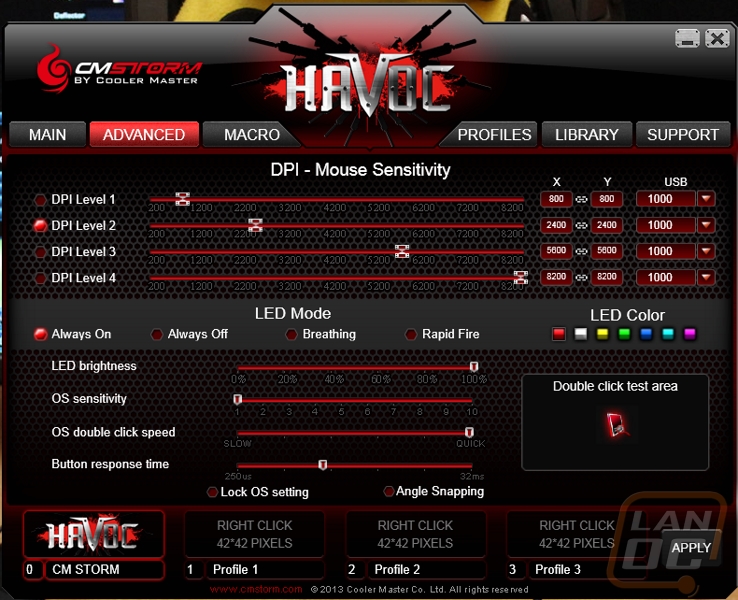 DPI can be adjusted anywhere from 100 to 8200 in increments of 100, so it does provide a nice level of customization. Four levels can be selected to cycle through on-the-fly, a corresponding LED indicator on the left-click button of the mouse tells you which level is currently selected. Keep in mind too that the DPI levels as well as the LED/OS settings are set on a per-profile basis. So the DPI levels set in profile 1 are independent of profile 2, and ideally the LED colors will help tell you which profile you’ve selected. There are enough colors to cover this purpose, but Cooler Master hasn’t provided a huge palette to work with; only seven basic hues. As mentioned, you can use the face buttons to cycle both DPI levels in a profile and the profile itself (the Havoc is configured this way by default).

Macros for the Havoc are built by recording the keystrokes, either recording the time or with a pre-set cycle time. Once you are recording, you’ll see key presses populate the right-hand window as you go. This will capture all keyboard and mouse actions, the exception being if you click to stop recording. Once you’ve captured some strokes, you can go back through at a very basic level to delete or insert.  You’ll then choose how the macro should execute: run once or loop depending on key press, release, or hold. You’ll use the ‘New’ button to create a new macro, saved locally on your hard drive (these generally travel with the on-board memory as well unless you tell it otherwise). You’ll also see the functions to Delete, Load, and Save. 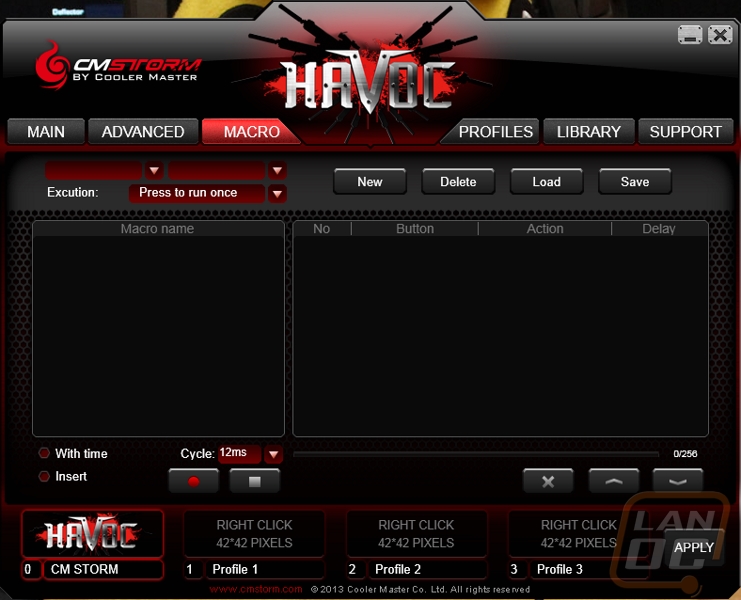 Just as macros are stored locally, so are the profiles and appropriately the ‘Profiles’ window is where you can manage which three profiles you want to equip the on-board memory with. You can create as many profiles as you deem necessary, but only three can be loaded to the mouse at a time. The option to import and export are also here. The ‘Library’ window servers a similar purpose but for macros in the same manner. 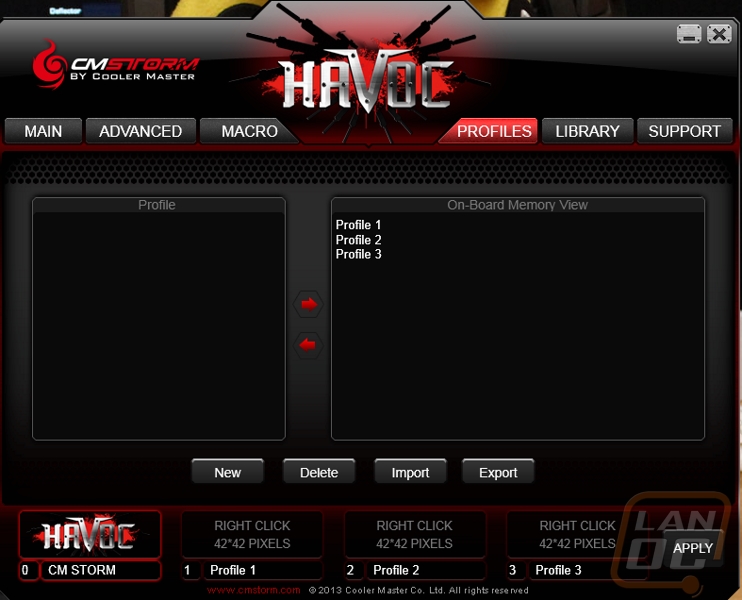 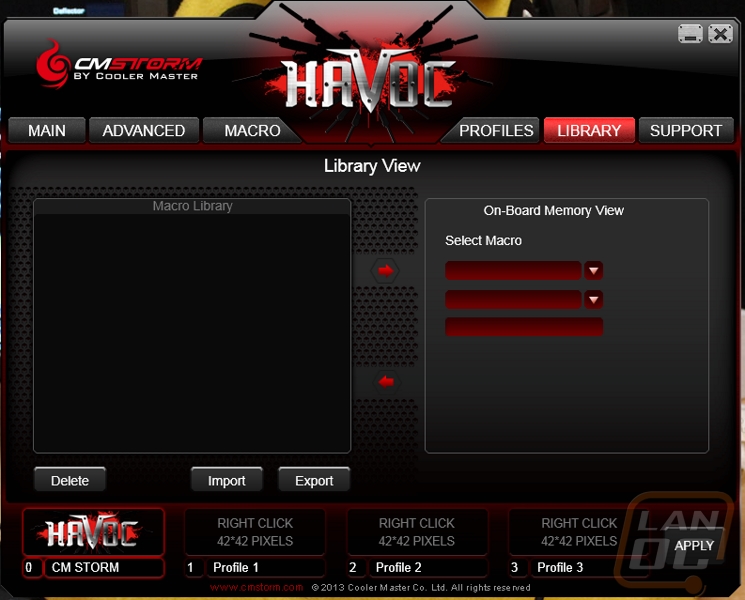 Lastly, the ‘Support’ window links you to online support and version information, and lets you know that Cooler Master has included and automatic update function that will yell at you when there are new updates 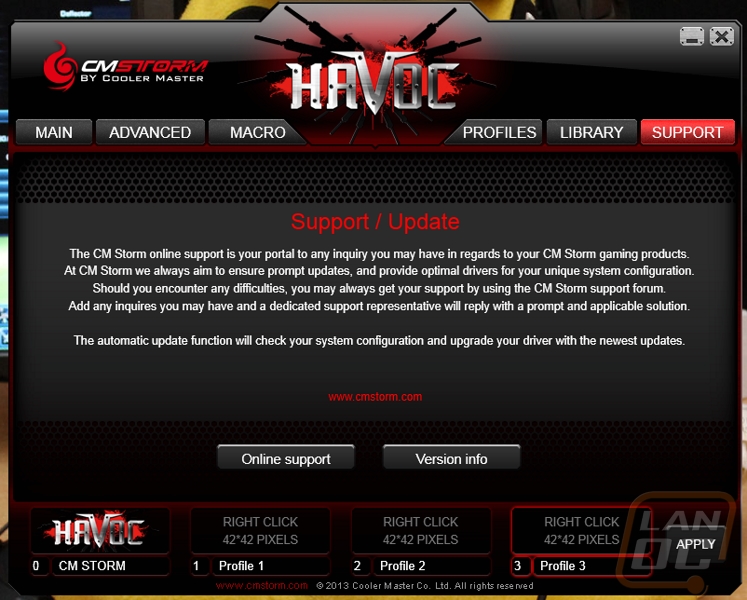 The Havoc is the second mouse from Cooler Master to feature the Avago 9800 sensor, allowing the DPI ceiling of 8200. While I’m still yet to find a reasonable use myself for anything about 3200, I’ve had several gamers (usually FPS) that swear by higher DPI. When you’re marketing a mouse for precision, it seems fit to provide the largest scale available. 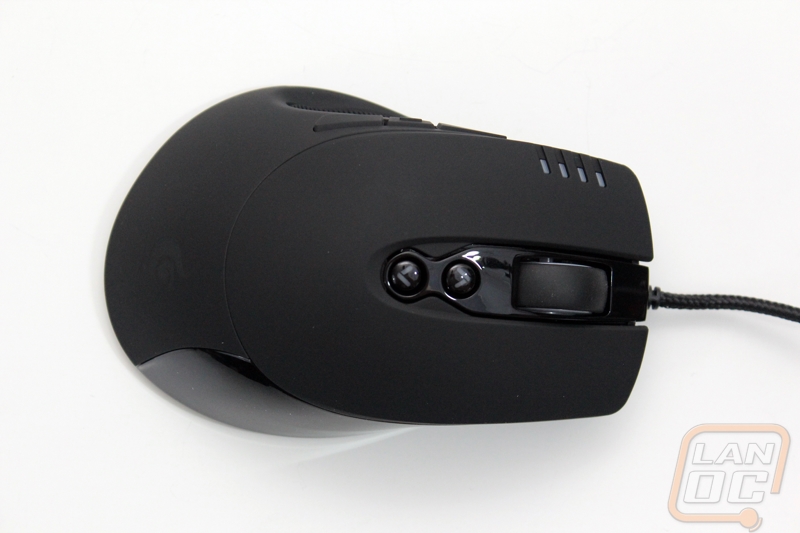 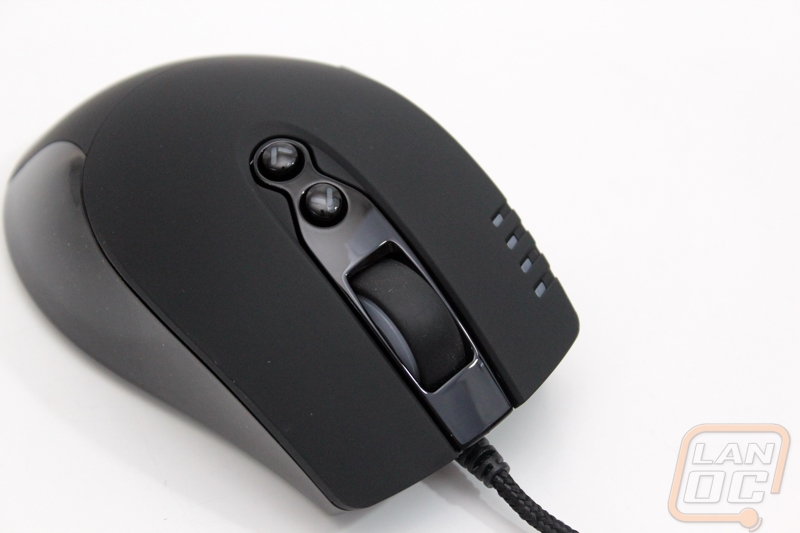 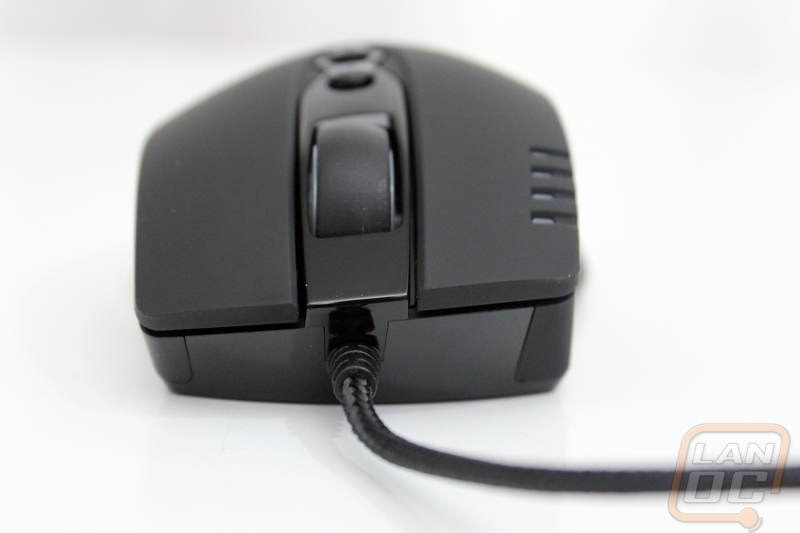 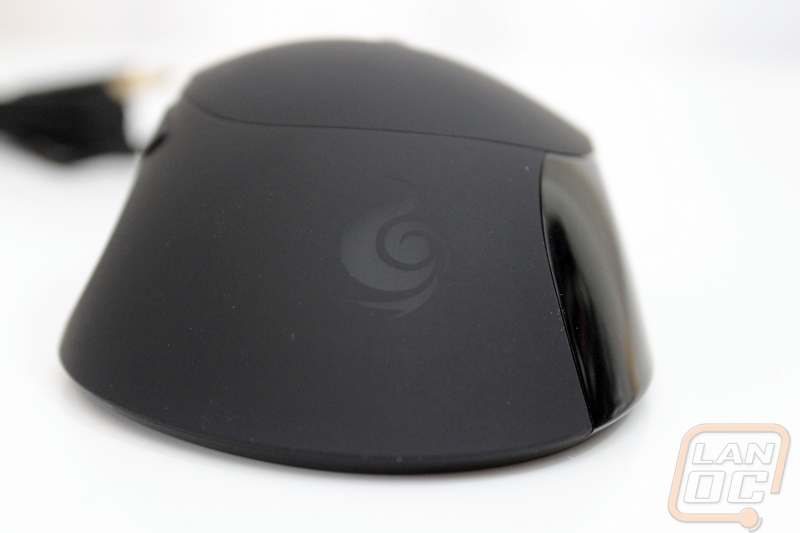 The eight programmable buttons are backed by Japanese Omron switches guaranteeing up to 5 million clicks, according to Cooler Master, but the reason I bring it up is that the side buttons in particular do have a really nice accentuation. 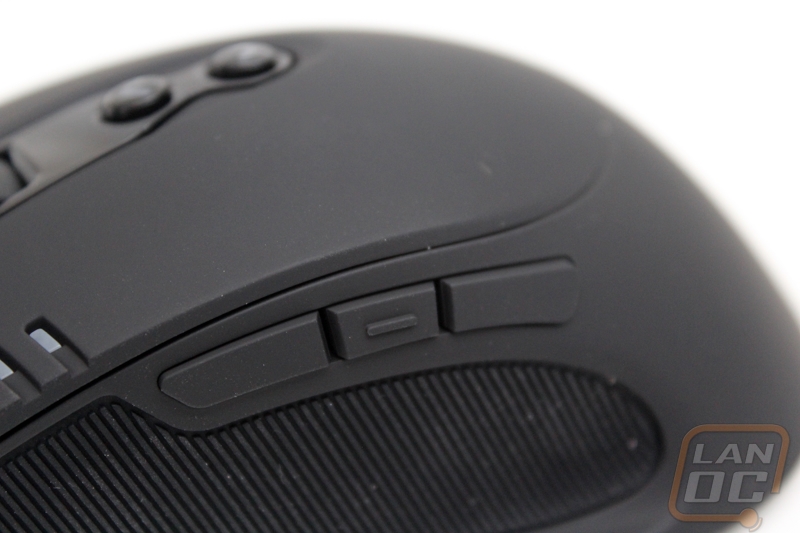 The majority of the Havoc is coated with a rubber material to help with grip, and extra attention was paid to the thumb area with a ribbed design to allow breathing. The material does help with grip but is guilty of showing any sort of grime or grease. 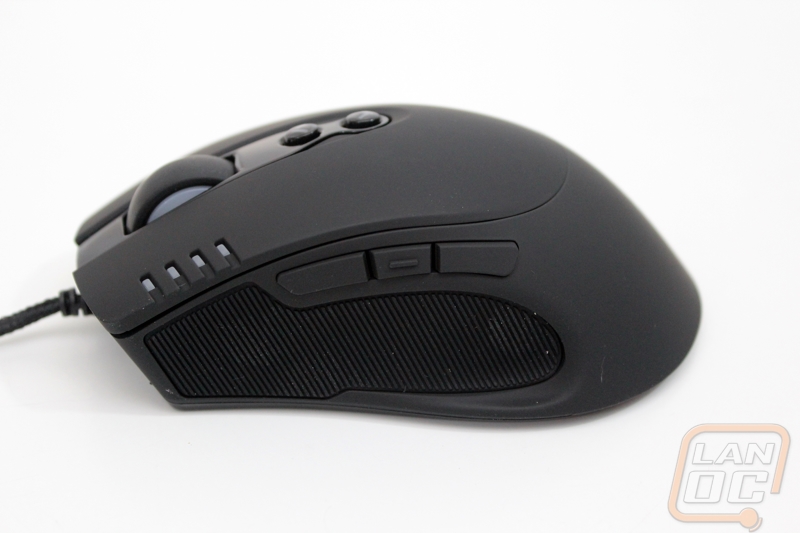 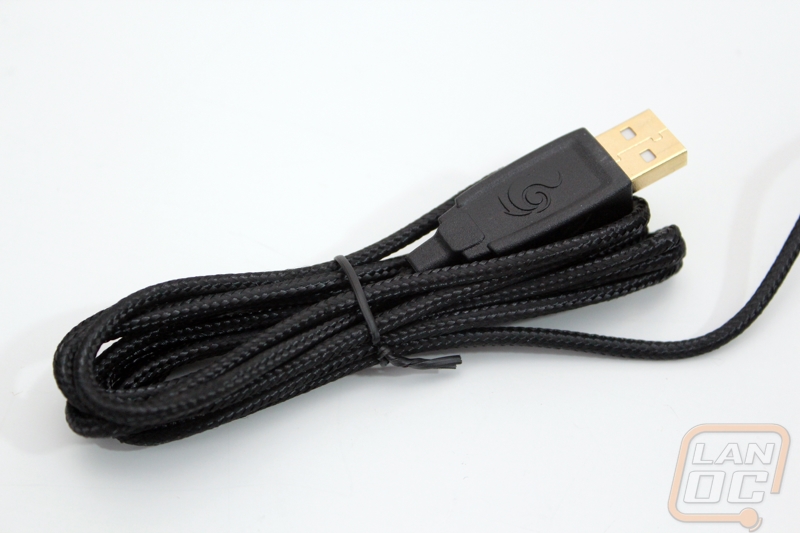 Lighting on the Havoc is used for both looks and functionality, indicating the settings currently selected. You’ll need to associate which colors are bound to which profiles in the software, but seeing that the scroll wheel, logo and buttons are purple should tell you quickly that you’re on profile 3, for example. The LED indicator in the corner of the left-click button is a nice visual of which DPI level the mouse is set to, but I did find that certain angles are hard to see at a glance, since this is placed on the decline facing away from the user.

Cooler Master specifies the coating material as rubber paint, and that’s true for about 80% of the mouse. In fact, the left side of the Havoc is designed with a thicker rubber grip area for the thumb, texturized with thin fins that run vertically for the thumb. This “rubber paint” flows over to the top of the mouse, in the palm and left-right click areas with really no problems other than it likes to show finger grease.

The right-side of the mouse, however, is a straight glossy finish. I’m not a fan of this material finishing in general, as it so easily shows any sort of dust, debris, or grime. In this case it goes beyond looks. Functionally, the gloss finish makes maintaining a grip on the Havoc very difficult. Cooler Master markets the Havoc as a palm-grip style mouse. While the definition of grip styles vary, it’s generally accepted that the mouse is controlled by the “pinching” pressure between the thumb and the ring/pinky fingers on either side. Sure enough, using the Havoc my thumb is steady, but I’m constantly re-adjusting my ring and pinky finger as they are sliding on the glossy surface. 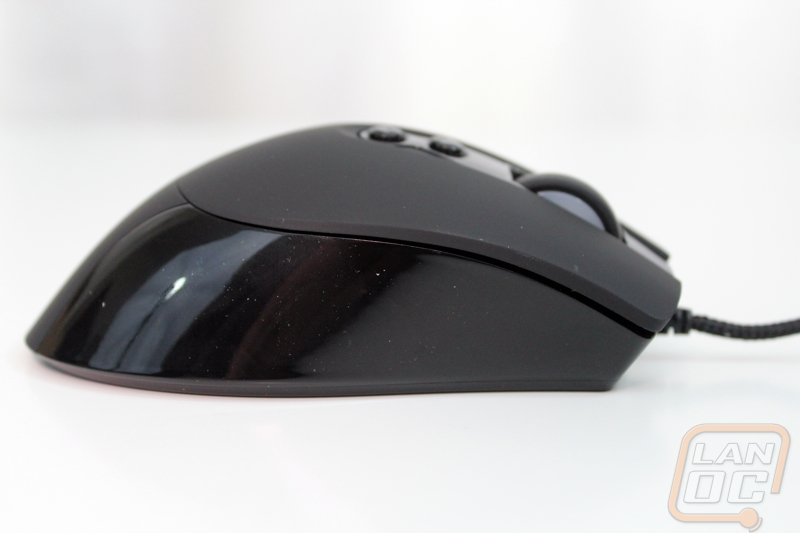 Otherwise, the Havoc is a generally comfortable mouse especially those with a larger hand, which may be an indirect goal of the mouse. As mentioned, previously the only mouse to feature the Avago 9800 sensor was the Sentinel II, which had a wide base but was actually fairly thin when it came to the finger/palm rest areas (the Inferno featured a Phillips Twin-Eye that maxed out at 4000 DPI).

Continuing with features that are large-hand-friendly, the Havoc is also similar to the Inferno with a wide scroll wheel. As opposed to the Sentinel II, and even some other models such as the Spawn or Xornet, both the Inferno and Havoc have a much wider wheel.

On the other hand, I would’ve liked to see either a larger middle button on the side, or just two larger buttons. The middle button (button 7 in the software) is great for push-to-talk binding, but with wider buttons to the north and south it’s susceptible to accidental presses. If you don’t change the default assignments, button 8 cycles profiles which may have different DPI settings per level. More than once I was thwarted in game when I suddenly dropped half my DPI.

The Havoc works well on a variety of surfaces, due in part to the sensor (aside from a few acceleration quarks if you’re switching surface types often) and also the fact that the perimeter of the mouse is almost all Teflon footing. Normally, these types of feet are in the corners of the mouse, run the length of the rear or something similar. The Inferno, for example, has two elongated oval pads in the left and right rear corners and a wide pad at the nose of the mouse. The Havoc features feet that run essentially the entire length of the mouse on the left and right hand sides, merging with a third that covers the rear of the mouse. While there isn’t footing uniquely for the nose of the Havoc, the top of the two side pads provide some coverage, leaving only a couple of inches naked. 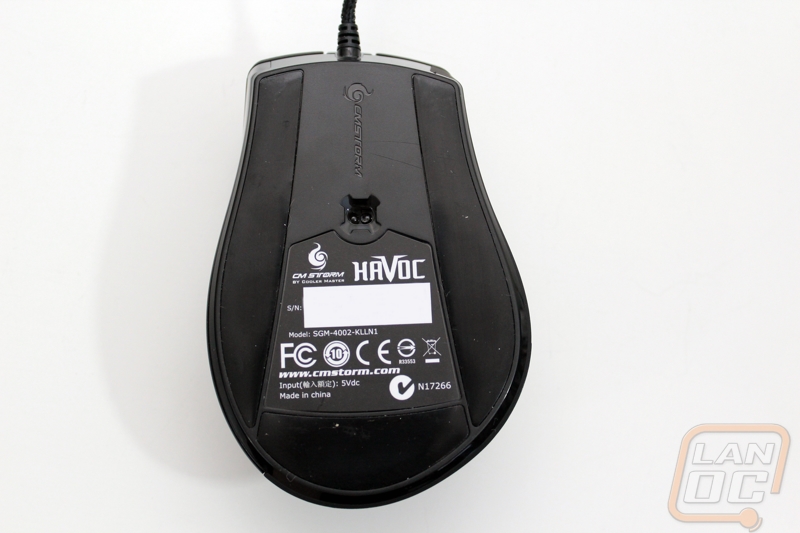 After using the Havoc for a while, the shape of the mouse really grew on me. For those that really enjoy a palm-grip style mouse, the structure of the Havoc fits the hand almost perfectly. I think it’s well understood that the size of your hand plays a pretty big role in the comfort of a mouse, and I think Cooler Master had the best of intentions with that in mind. But there are a few minor areas that they missed the boat on, and one they weren’t even on the right dock for. In particular, the side button area is too busy for me. I’d like to see fewer, larger buttons than sticking a small third one in between. I just couldn’t train myself to hit that button in a way that never accidently pressed a neighboring button, especially the one behind it. When it is something as vital as communication with your team, you can’t and really shouldn’t have to worry about how your thumb is approaching one of those buttons.

The larger complaint I have is the finish on the left side of the mouse. It seems very odd to me that Cooler Master would recognize the need for a rubberized grip for only half the contact points of a grip style they are marketing for. Structurally, the Havoc is built similar to the Inferno, which is equipped with the rubber material on both sides and in the left-right click area, while trading the gloss finish for the palm rest.

Cooler Master had the right idea for the Havoc, but it doesn’t seem to have translated into the best execution, and it just isn’t a mouse that I would use or recommend. 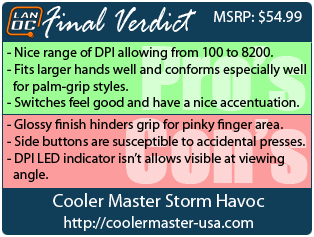 We have 555 guests and one member online