The first time you see the Truly Ergonomic 207 you really have to sit and soak it all in. First you take in the unique shape; there really isn’t anything else on the market with a shape like this. Then when your eyes focus on the keys it is just plain intimidating. While using the keyboard I posted up a picture of it on my Facebook and had a range of responses. A lot of people didn’t thing they could ever get used to it but I also had people that were very interested in how well it was working. The reason for that is because there just aren’t many options for those who want an ergonomic keyboard anymore.

Truly Ergonomic pulls off their ergonomic design without raising the middle of the keyboard up or placing all of the keys in a bowel. They have rearranged some of the keys around the standard QWERTY layout while at the same time changing the keys up and down on the keyboard to better fit the curve your fingers land in when you sit them down. On a standard keyboard the keys are in perfect rows going left to right and the up and down rows are staggered. On this keyboard the rows going up and down are straight and the left to right rows have a major wave in them. In the middle of the keyboard they have moved a few of the keys in between the letters, the keys start smaller on the top and get wider as they go down. This helps angle the other keys to better fit the way your arms will angle towards your keyboard when sitting, unless you are somehow skinnier than your keyboard.

The keys up the middle are (starting from the top) the Windows key, delete, tab, backspace, and enter. That’s right: those are all in the middle now and not on the outside of the keyboard. This means they are easier to reach without moving your fingers around much, but it will take a lot or re-learning to adjust to it. The outside rows on the 207 have three matching keys, the shift key, Crtl, and Alt. For the 207 these are all double wide but on the 209 model the ALT keys are single width giving you a few extra keys to program.

Your spacebar is actually split up into two parts with the enter key in between and under where your palms float are the page up and down keys as well as the direction pad. These are all keys that get used less and when they are used you don’t normally need to use them while typing so it works out. I didn't have any issues with bumping those keys at all, the way your hand arches up when you have the heal of your palm on the palm rest clears them perfectly. One other thing I should point out with the shift and control keys is that they are actually moved up one row. On a traditional keyboard shift would be next to the Z key but in this case it is a row higher next to the A key. 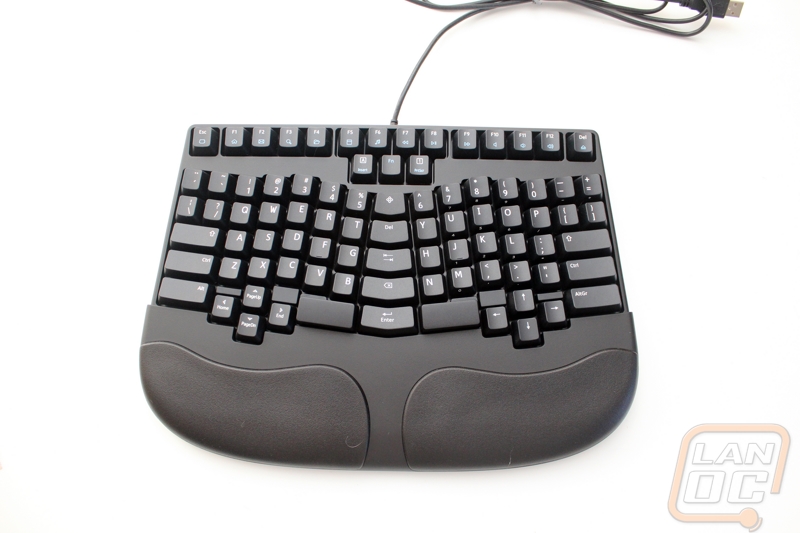 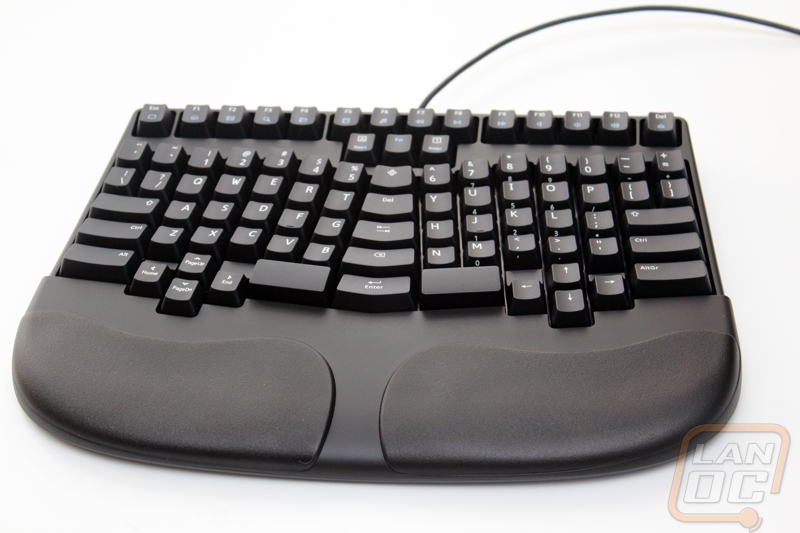 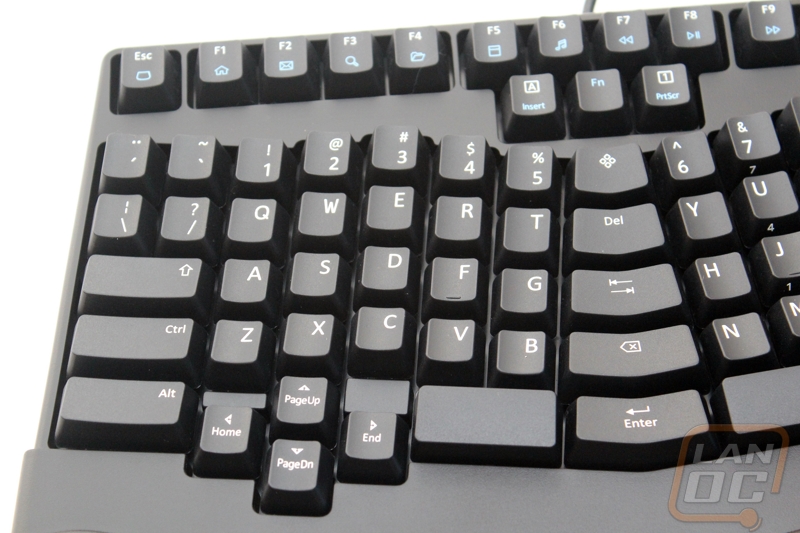 Because there isn’t any backlighting the key caps are black through and through. On the flip side though (lettering side) we have cylindrical shaped keycaps. The lettering was a little bit of a concern for me. Rather than go with a normal laser etching or double shot injection they went with what looked to be pad printing but after talking to them to find out for sure I was told they are Laser Engraved with white infill printing process. This should hold up to any abuse you give them but they will still show dirt, something that I did see a little on on my A key after a few weeks of use. 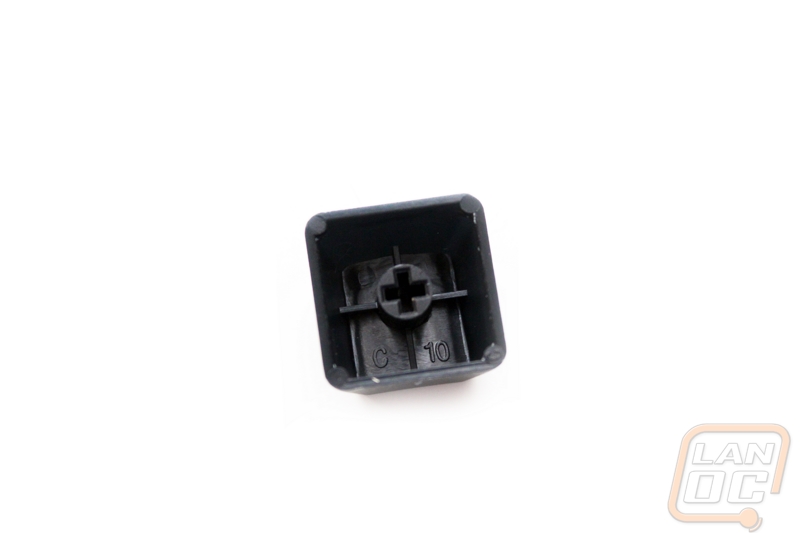 With the keycaps off I was able to get a peek at what goes on under everything. The 207 comes with Cherry Brown key switches and it also uses Cherry stabilizers under all of the wider keys to keep things stable. If you have ever cleaned your keyboard before, you will be extremely happy for those Cherry stabilizers as they are much easier to reinstall keys onto when it comes to wide keys. No wire stabilizers here! 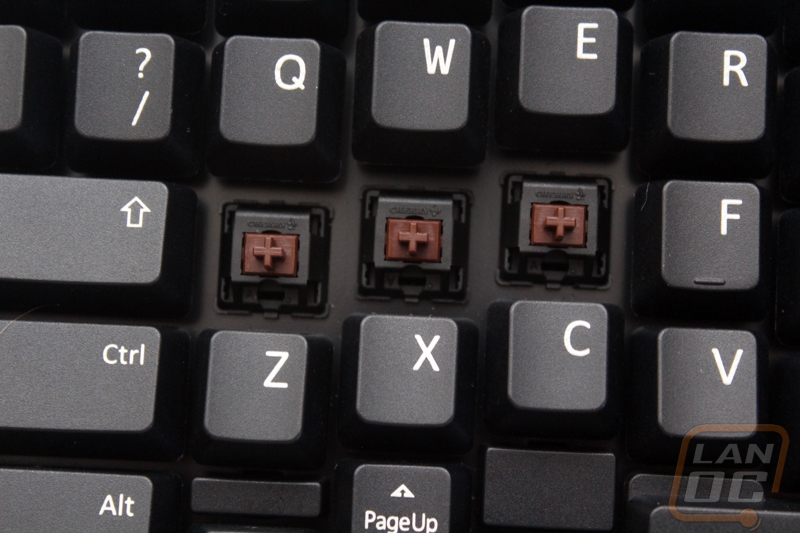 As far as thickness goes, the Truly Ergonomic is about a standard thickness for a mechanical keyboard. There is a slight angle naturally in the design and with the wrist rest attached it seems thicker. This is because the wrist rest doesn’t angle down to the desktop like most wrist rest. This one actually holds your wrists up high enough to type properly. 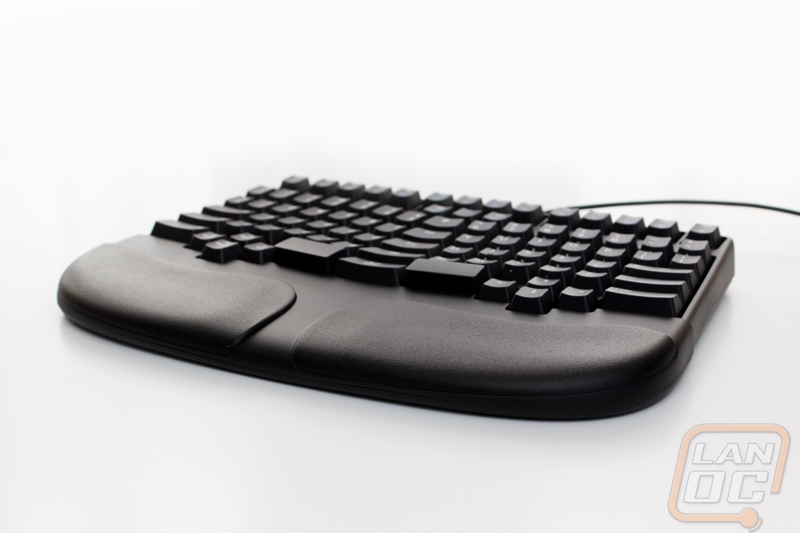 The last part of the keyboard is the special keys on the top two rows. I will touch on some of their uses more in the performance section but I did want to point out that the top row is your standard F1-12 row with escape and delete in the corners. When you use the Fn key that is in the middle of the second row all of those keys change into media and special function keys. Along with the function key in the second row you also have the caps lock on the left and the key on the right turns on the built in number pad that is on the right side of the keyboard. Both the number lock and the caps lock turn on a blue light when pressed that make the key glow slightly. 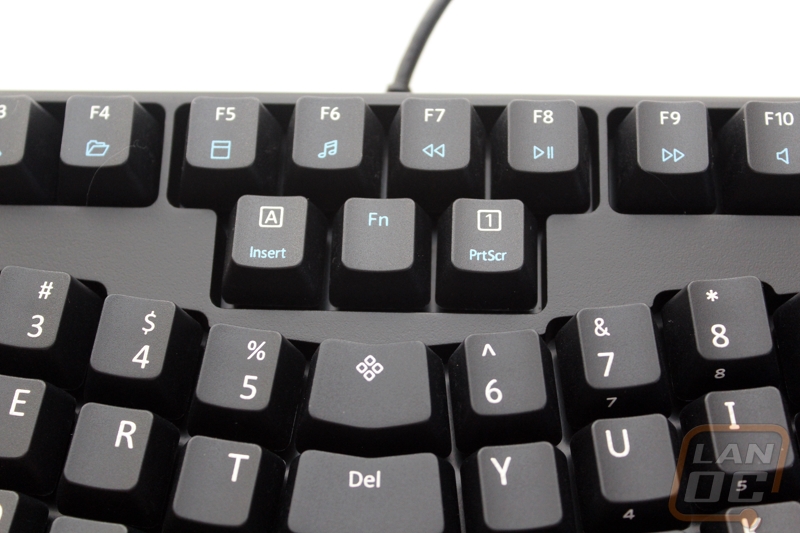 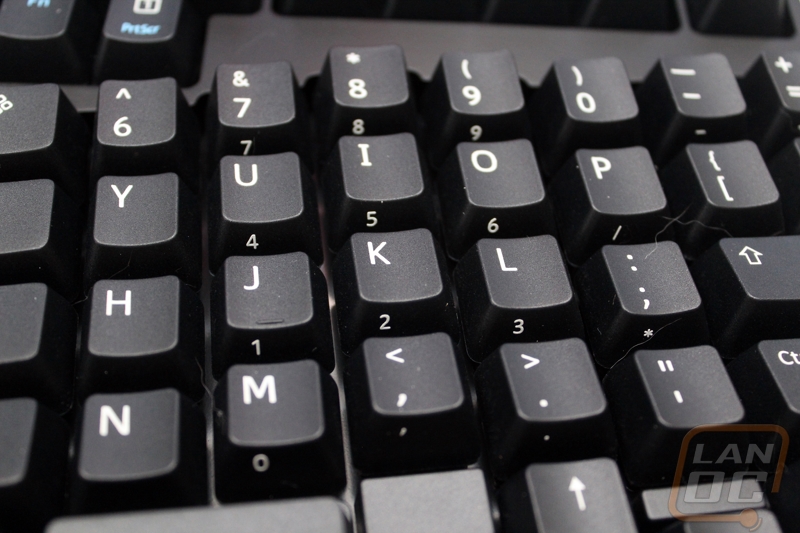 The wrist rest for the Truly Ergonomic 207 like all of their other models comes attached to the keyboard. You might mistake it as part of the keyboard but it can be removed if you prefer. At first glance the two raised areas looked hard and uncomfortable but as you can see they are padded, we will find out in the performance section how well they work. 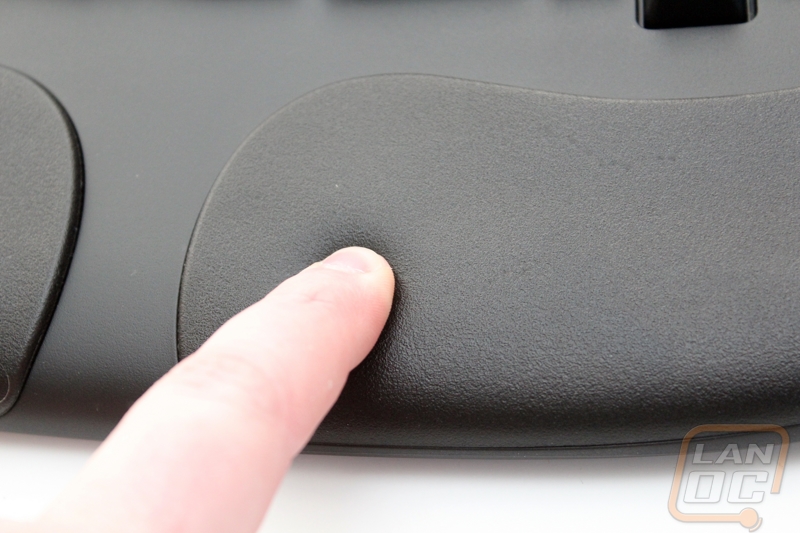 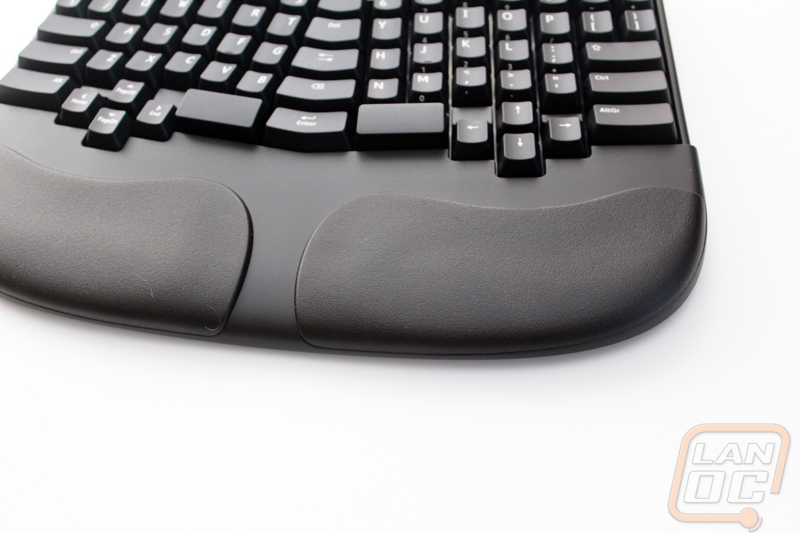 On the bottom of the Truly Ergonomic 207 you are going to notice the DIP switches on the center right away. Here you can actually change how a few of the keys function. For example if you flip the 3rd dip switch you will change the left spacebar from space to an alternate. This means the key will show up as an unused key, specifically International-6 (07.8C:0x5C) or if you upgrade the firmware this will use an easier to program Application/Menu (07.65 : E0x5D). That means you can bind it for use in some games as well as use it with third party programs like AutoHotKey, SharpKeys, or KeyTweak. 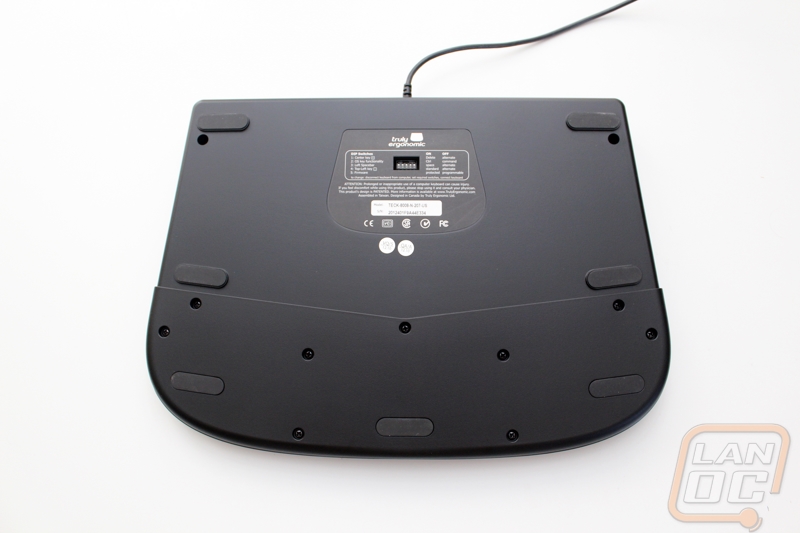 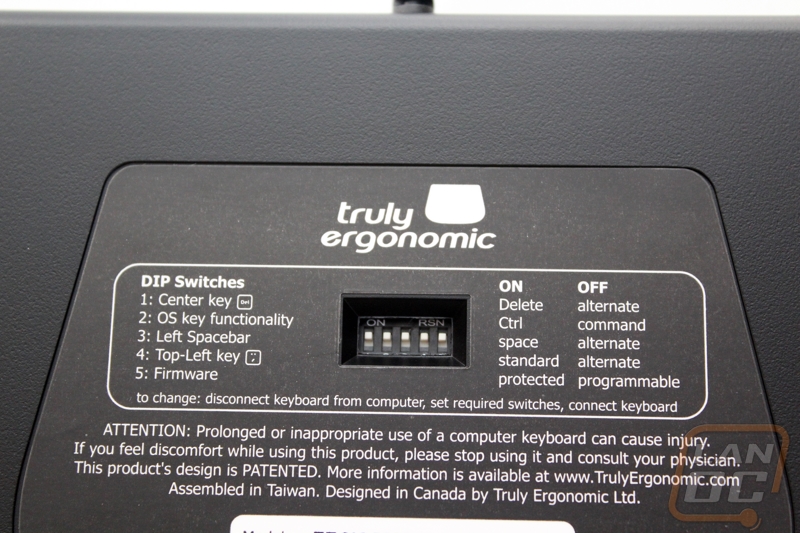 Beyond the dip switches on the underside there are also wide rubber feet all over the bottom of the Truly Ergonomic 207 to keep it from moving around. Including the three on the wrist rest there are a total of 7. This is considerably more than what you see for larger keyboard even. It should also be pointed out that there are no options to angle the keyboard if that is what you prefer. Speaking of the wrist rest, you can see all screws on the bottom that hold it on (nine in total). If you remove the screws you can remove the wrist rest and make the keyboard even smaller. 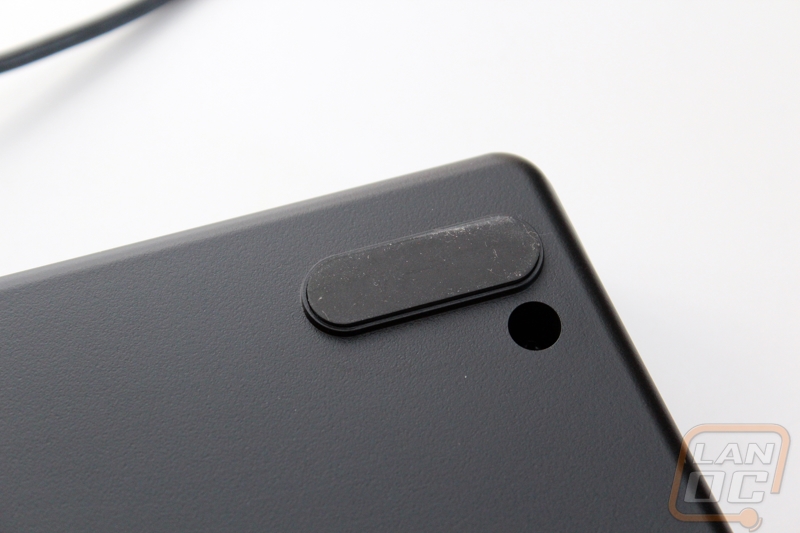 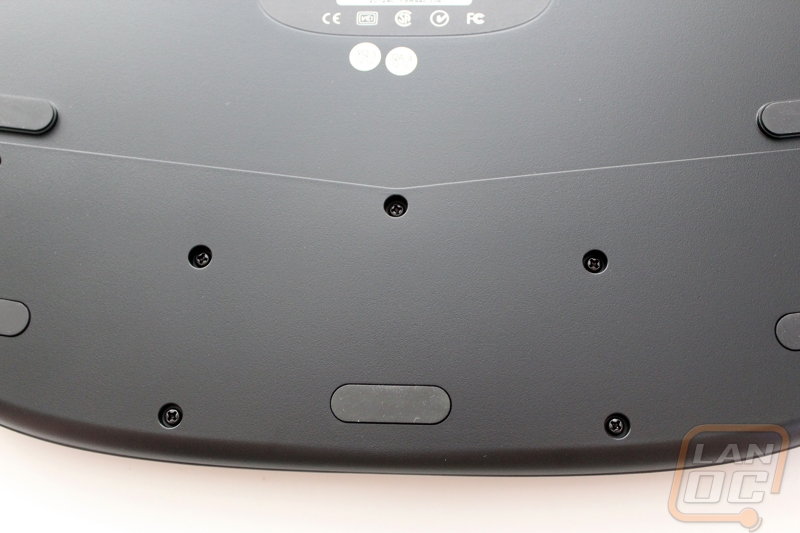 I spoke a little about its size before but until you put it next to something it’s really hard to get a feel for it. This is a photo of a Cooler Master Storm Quickfire Rapid with the Truly Ergonomic 207. You can see that the overall width is about an inch less at the widest point and up toward the top the difference is even larger. The top is actually not even as wide as the Quickfire without the direction pad area. The second picture is from Truly Ergonomics website where they compare it to another ergonomic keyboard, because of the number pad the width difference is even more noticeable in that photo. 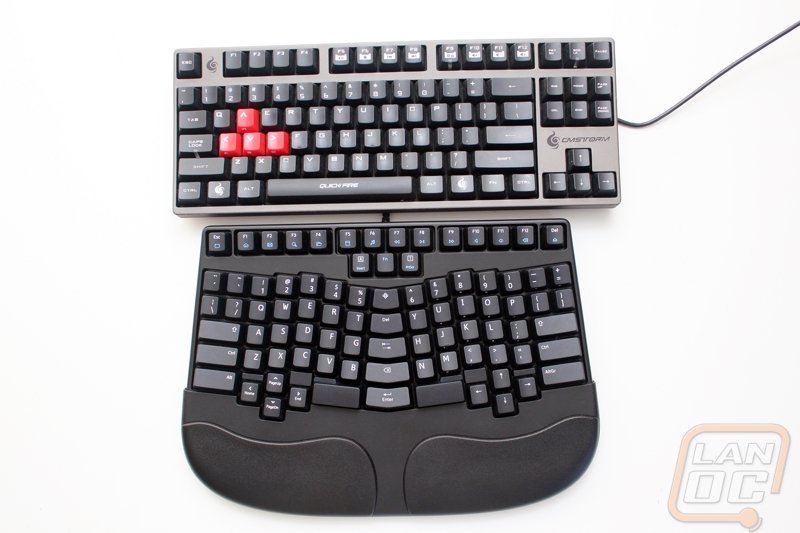 The cord for the Truly Ergonomic 207 is USB and 6 feet in length. There isn’t a sleeving like we have seen on a lot of other keyboard cords recently nor does it detach. But it does get the job done. 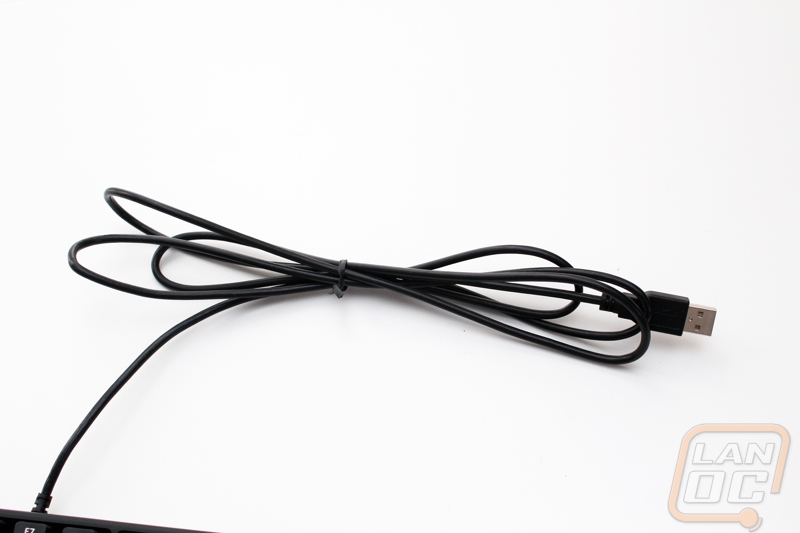 Looks interesting, would be interested in a DVORAK or different layout that is more ergonomic to go all the way. Not sure about the Ctrl and Alt positions, would probably mess me up in League for awhile.

Leonresevil2 wrote: "unless you are somehow skinnier than your keyboard." Uh oh.