I was a little torn with the G510s, on one hand hardly anything has changed from the previous model. But frankly the G510 was so popular; I really don’t blame Logitech for not wanting to mess with the formula to much. The G510s is a perfect upgrade for someone who isn’t interested in a mechanical keyboard or for anyone who can’t live without Logitech’s built in LCD screen. I personally did have a few small issues, the same issues I have had with the G15 in some cases and G510 as well. For one, I would really like to see a USB port on the keyboard for me to be able to plug in my mouse. This helps me keep my desk fairly clean. The built in audio card is nice for the same reasons, but I wasn’t a fan of the keyboard completely turning off while windows installs the new audio device every single time I plug in my headphones.  The backlighting was a little dimmer than I would prefer as well.

There are still all of the benefits to the G510s as well though. I find the LCD screen to be very useful when using Ventrilo for example as well as using it as a way to keep track of time while in game. I also love the ability to pick any color I would like for my backlighting coloring, this is something that you don’t get in the world of mechanical keyboards. Where the G510s really shines is with its media controls and the Logitech Gaming software. I know a few people who won’t use anything other than Logitech based on their software alone. Their software covers all of their product line, allows you do almost anything, and is very easy to use. You don’t have to sign into the cloud like some of their competition and you only need one program no matter how many Logitech devices you are using. That last part is important because once I start using one Logitech product I feel the need to switch everything over just to keep everything simple.

At the end of the day, the G510s might only be slightly changed from the last model but I still have to give it a recommended. Logitech makes a good product and follows it up with their amazing software. There is still room for improvement with the G510s and for those mechanical keyboard enthusiasts I think that Logitech really needs to look at options to get people a mechanical keyboard with a LCD, then they might just take over the world. 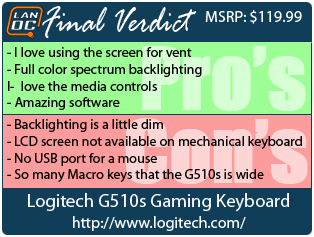 You might call him obsessed or just a hardcore geek. Wes's obsession with gaming hardware and gadgets isn't anything new, he could be found taking things apart even as a child. When not poking around in PC's he can be found playing League of Legends, Awesomenauts, or Civilization 5 or watching a wide variety of TV shows and Movies. A car guy at heart, the same things that draw him into tweaking cars apply when building good looking fast computers. If you are interested in writing for Wes here at LanOC you can reach out to him directly using our contact form.
Discuss this article
Log in to comment
Posts in discussion: Logitech G510s

We have 2609 guests and one member online