When it comes to mouse pads there are a few things to consider, but for the most part people don’t really put much thought into them. As hardware enthusiasts we rarely see people who change out their mouse pads often like we sometimes see with PC hardware, mice, and keyboards. Because of that its easy to just ignore them, but a proper mouse pad can still play a good roll in your pc/gaming experience. That is why we still see companies innovating and trying new things like with the Power-RX mouse pad from Cooler Master Storm. Today I’m going to take a look at the Power-RX pad and put it to the test with a few different mice to see how it performs.

Cooler Master packed the Power-RX up into a black and red tube. With the black and red them it’s obvious right away that this is a CM storm product. Of course the blood splatters and outlines of people shooting guns it was fairly clear anyhow. Other than the CM Storm branding and the large Power-RX logo there is a small color code on the right side showing that the black side is the “surgical strike surface” and the red side is “heavy duty grip”. At first glance when I pulled the pad out I thought maybe it was a two side pad, so this is useful information. They have also attached a small piece of the material to let you see how thin it is and feel the surface. At first I thought they had also put a specification listing on the tube as well but it was actually a long list of different languages with the words “Gaming Mouse Pad- Power-RX”.  There isn’t anything but the pad itself inside, but I should also point out that the end pieces to the tube were both metal when I had expected plastic. 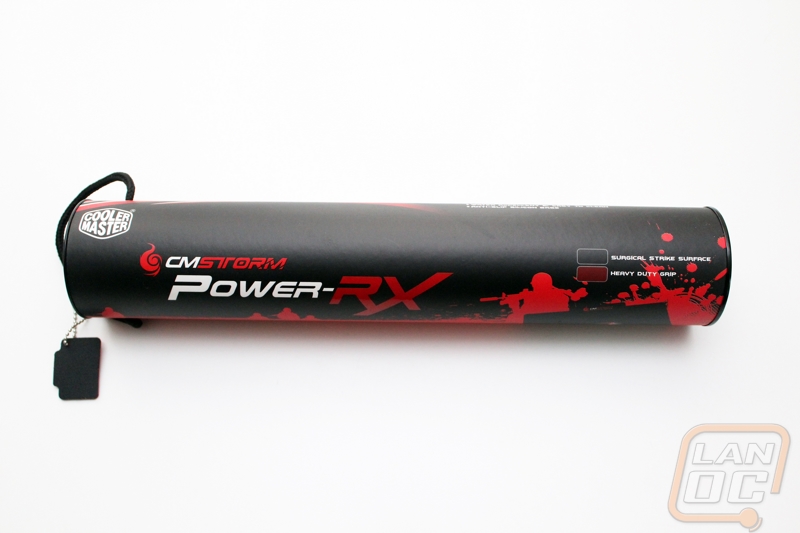 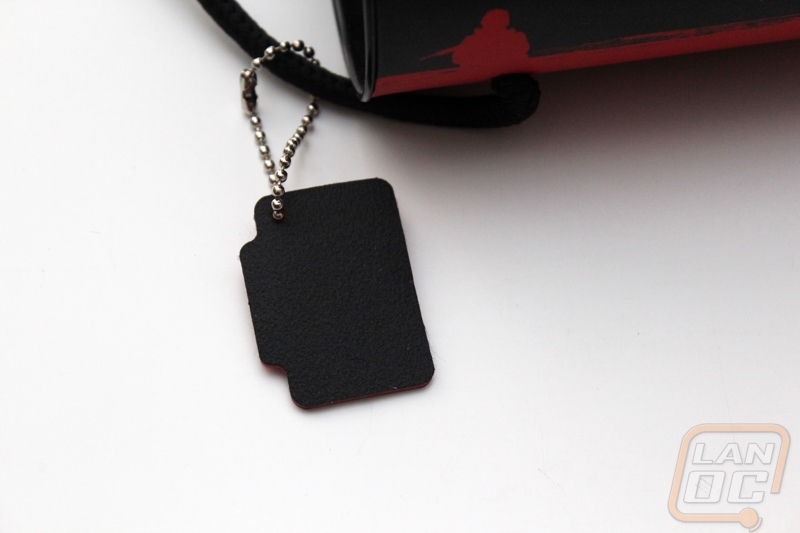 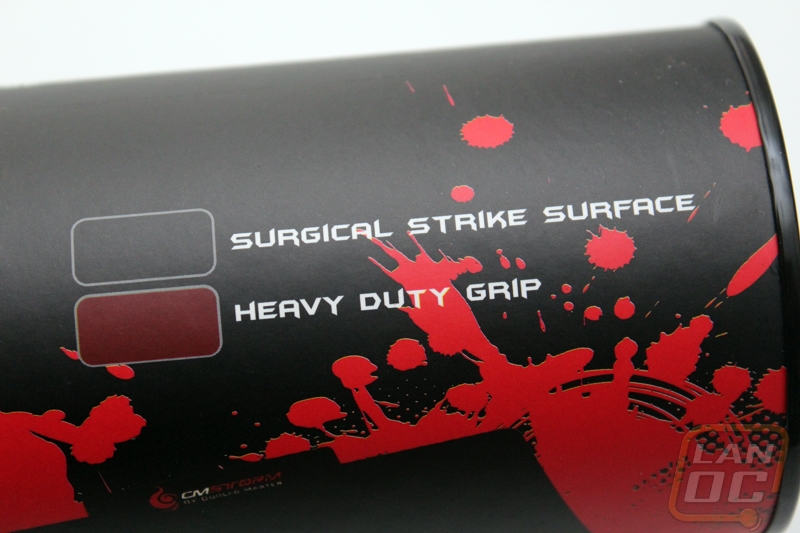 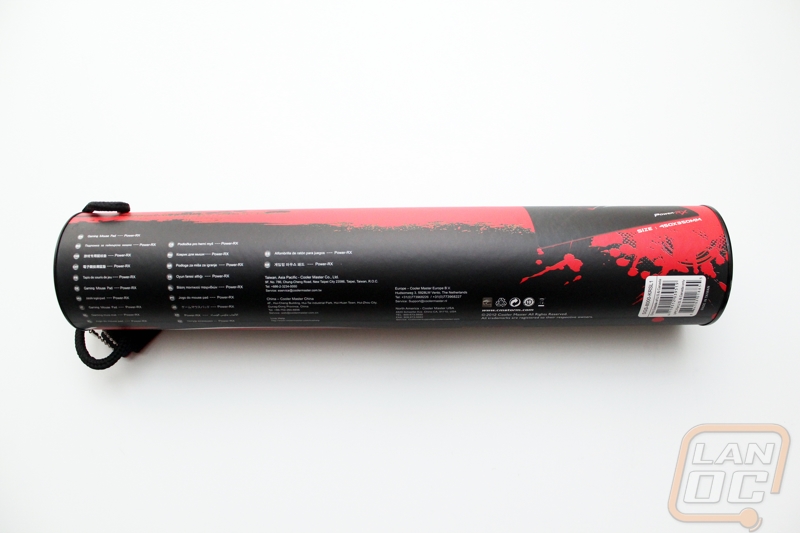 I’ve talked about it many times before but for those of you who are on here for the first time, I am a very big fan of hard mouse pads. When Cooler Master said they were going to send me the Power-RX I was a little concerned, am I going to hate this pad only because it isn’t what I’m used too? They told me I would love it though, so I held my lounge and waited to give it a try. When I got the pad out I was a little surprised right off the bat. It’s a flexible pad, but it is thinner than what most soft mouse pads are and it had an interesting finish that I hadn’t seen before. Even more surprising was the overall size of the pad. At just under 18 inches wide and 14 inches tall this is one of the largest mouse pads I have tested and it is considerably larger than the “large” mouse pad that I normally use day to day.

Let’s talk a little about the shape and layout of the Power-RX. Beyond being nearly as large as my desk, it does have a shape that isn’t completely rectangle. Up on the top of the pad there is a 7 inch wide section that sticks out slightly, this is normally around where your mouse cord would be. I don’t think there is a specific reason for it, but it does give the pad a little more style and shape than a rectangle. There is a little bit of branding on the Power-RX as well and we did run into a couple small issues here. The SM Storm logo is up on the top of the pad in red and white and the Power-RX logo is on the bottom right. The issues I ran into on my pad was the branding was actually crooked and even just coming out of the tub some of the Power-P was coming off. I spoke with Cooler Master about these issues and before I even told them what it was they knew. The pads sent out to the press were a pre-production batch; the issues were resolved before they went up for sale officially. Frankly I would be fine without the branding at all, or with a grey or black that is less visible.

I mentioned earlier that the surface of the Power-RX is especially interesting; I’ve never seen anything like it. The bottom of the Power-RX is a red silicone that is a lot like the silicone oven mitts and other heat resistant products that have become popular. Cooler Master went with this and gave it a slight texture for additional traction. It is interesting that the bottom of the Power-RX has the Power-RX logo formed into it; I think this is why I thought that this might have been a two sided mouse pad. On the top black side they used a combination of a rubber coating overtop of a standard mouse pad weave/fabric. This gives the pad a finish that is a mixture of a hard mouse pad and a soft mouse pad. The texture is a lot like a hard mouse pad, but if you look close you can still see the soft mouse pad fabric.  This gives the pad an overall thickness of 2.5mm’s and the pad is flexible and easy to roll up and toss into a LAN bag. 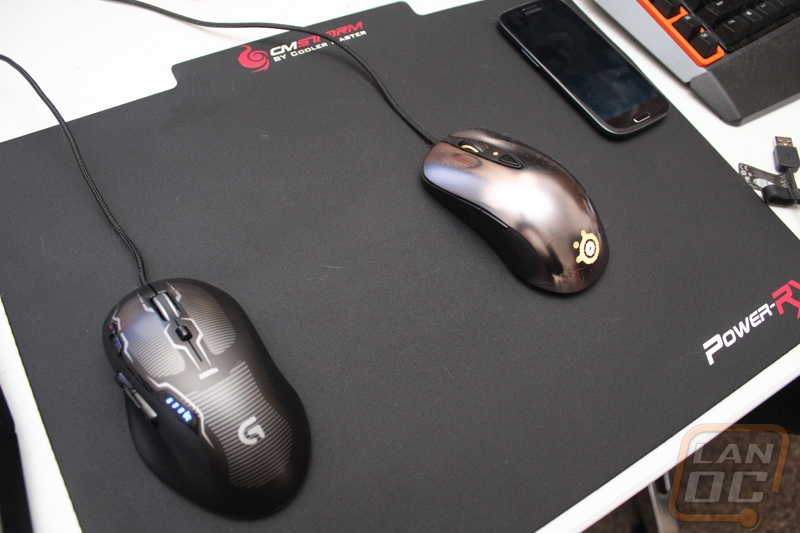 So how did it feel? It wasn’t as quick as my hard mouse pad but there were similarities. It feels like a hard mouse pad with a very thin layer of fabric over top of it. When moving around I still feel the texture and slight resistance of the fabric, but the rubber coating does limit that to just a small amount. The size of the pad for me was just too much, in order for me to use this day to day I would need to put almost half of my keyboard up on top of it as well. You certainly aren’t going to run off the side of the pad while in an important battle but I have a feeling some people will struggle with having room to fit it at all. I know if I were to go to a LAN with this pad I would struggle with it.

When putting the Power-RX to the test I busted out a couple of my favorite mice to see how they felt and to see how it would work with different sensors as well.  The S9500 and S9800 sensors in my Logitech G500s and SteelSeries Sensei were a good place to start. Both sensors are known to get acceleration when being used on soft mouse pads, something I rarely notice because of my hard mouse pad preference. I did get a slight amount, but not as much as on a normal soft mouse pad, much like the feeling the Power-RX fell in between a hard and soft mouse pad. I also grabbed my Razer Deathadder with the S3888 Optical sensor to test out how everything performed with an optical sensor. To no surprise I didn’t notice anything at all that stood out, the Power-RX performed perfectly. 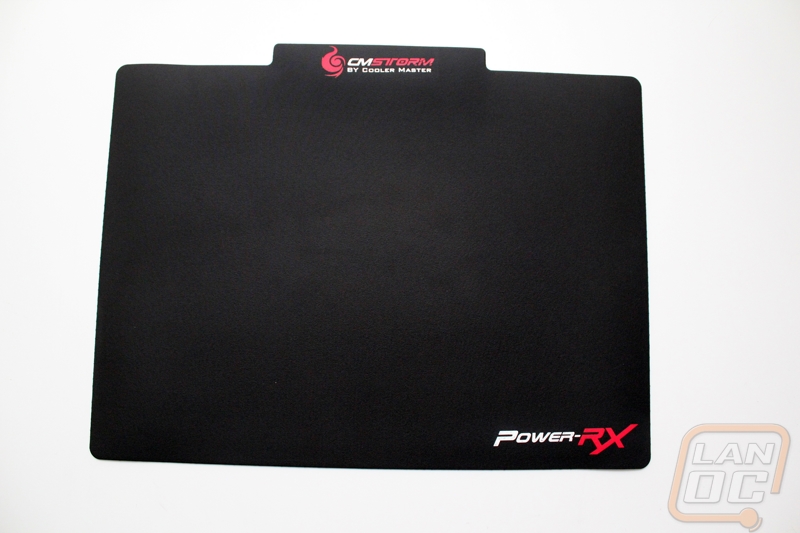 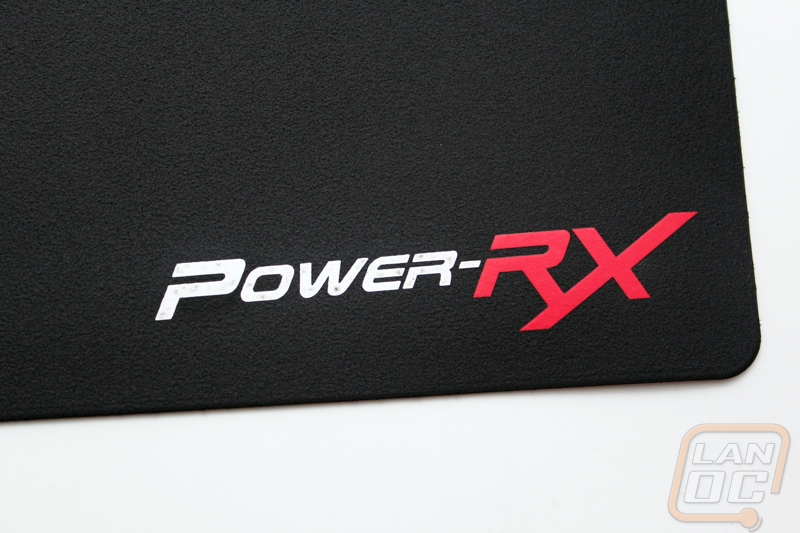 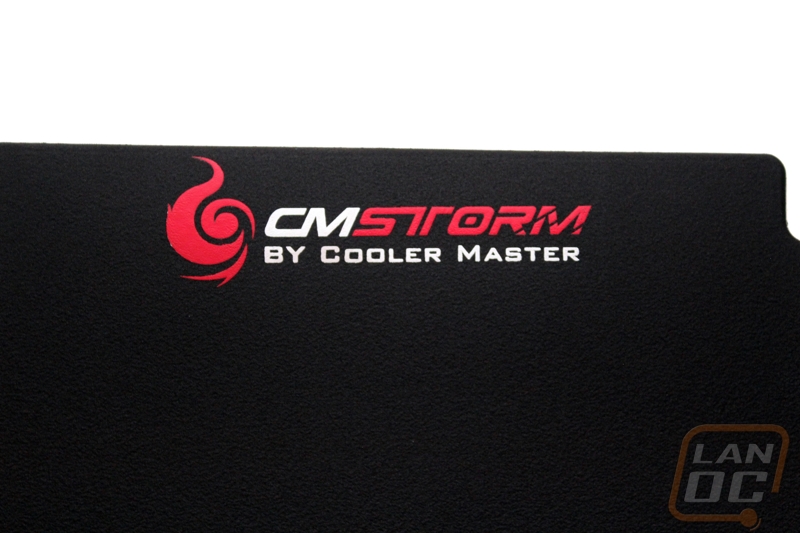 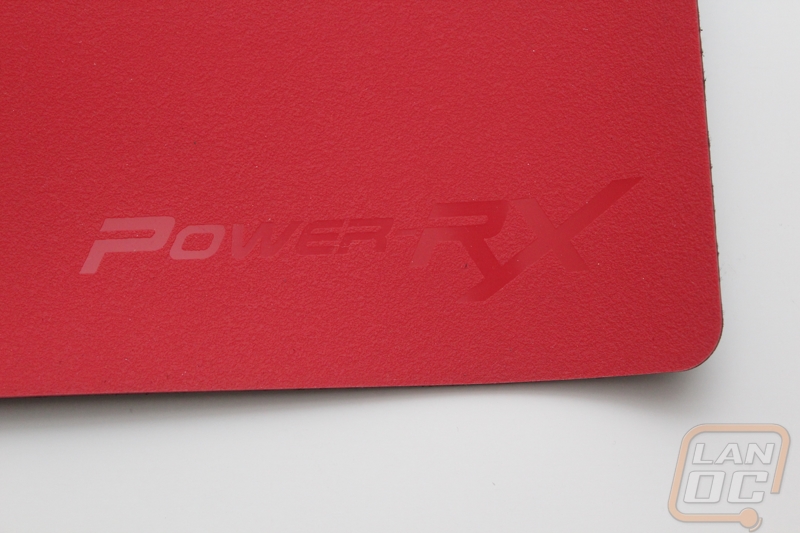 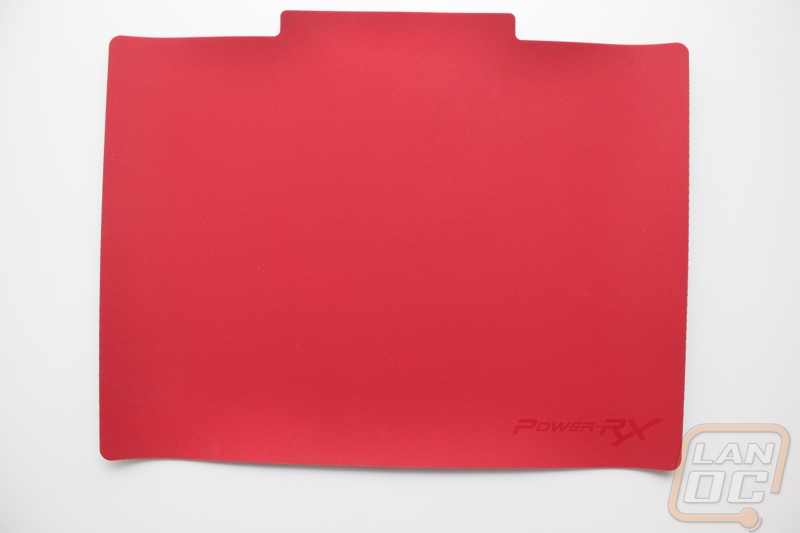 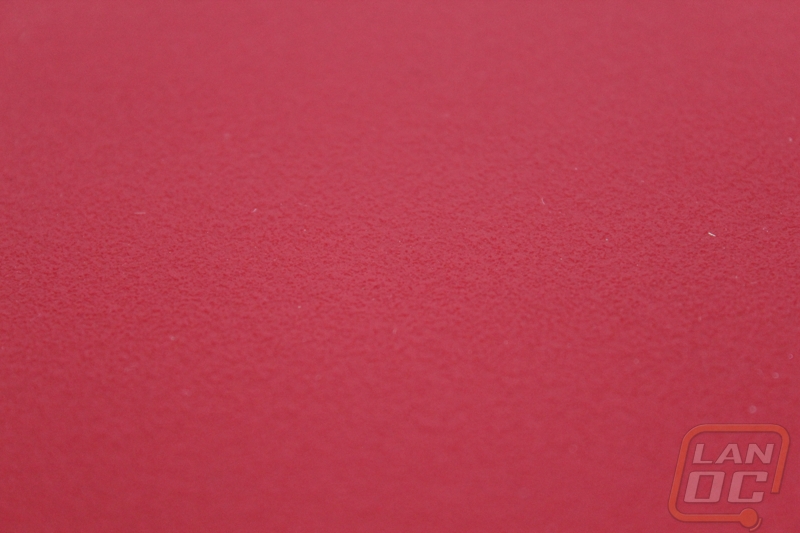 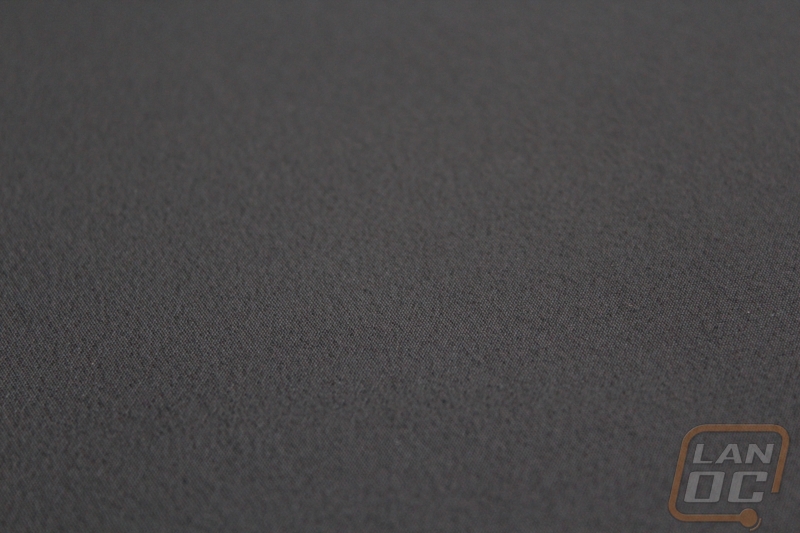 Overall the Power-RX is a very interesting mouse pad. I’ve never seen a mouse pad that trys so hard to be a soft and hard mouse pad at the same time. The crazy thing is I don’t think will find a better solution to get the hard mouse pad feeling while still being able to roll it all up and pack it away. I tested it with a few different mice with a variety of mouse sensors to see how well it performed. I did experience some acceleration with the Avago 9500 and 9800 sensors, but still less than what you would normally see with a full soft mouse pad. If It were up to me I would sell a model that was at least half the size of this current model or something a little wider that would let me put my entire keyboard upon the mouse pad, the current size is just too large for me both in my office as well as when I go to LANs. The red and white logos on the Power-RX were a little bright and I think they would fit Cooler Masters direction when it comes to them bringing out keyboards now with less branding where they can. Cooler Master made the Power-RX the first soft, hard mouse pad and because of that I will always keep it around in my collection for a nice happy medium. 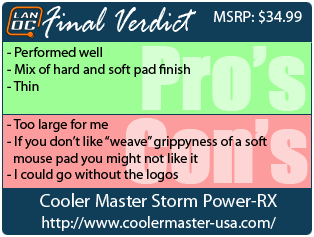 You might call him obsessed or just a hardcore geek. Wes's obsession with gaming hardware and gadgets isn't anything new, he could be found taking things apart even as a child. When not poking around in PC's he can be found playing League of Legends, Awesomenauts, or Civilization 5 or watching a wide variety of TV shows and Movies. A car guy at heart, the same things that draw him into tweaking cars apply when building good looking fast computers. If you are interested in writing for Wes here at LanOC you can reach out to him directly using our contact form.
Discuss this article
Log in to comment
Posts in discussion: Cooler Master Storm Power-RX 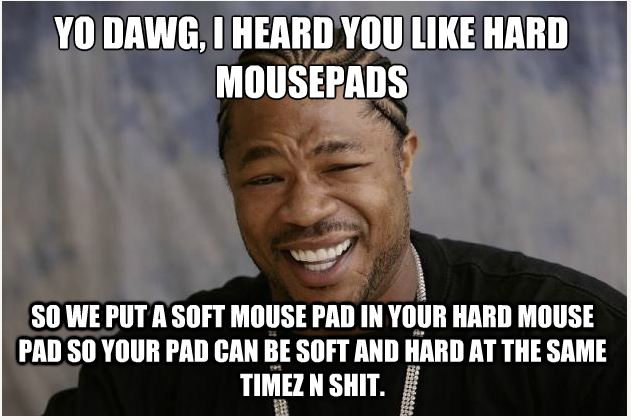