Before I talk about how the green switches felt, I wanted to touch on the Triggers other features. Its most notable feature is the red backlighting and the controls that allow you to flip through a few different options. Using the F1-F4 keys along with the function button you can turn the back lighting on or off, adjust the brightness, or flip through three different lighting modes. The modes are full backlighting, WASD, and full backlighting with a pulsing lighting. Along with those function keys, you also have media controls from F5-F11, personally I would prefer at least play/pause and volume buttons to be dedicated keys for quicker access. I generally end up not even using media keys that require the use of the function button, but it is still better than not having them at all.

The detachable cord on the top right of the Trigger is very useful, especially if you are someone like me who ends up packing up and going to LANs. I’m able to leave the cord at my desk and take the keyboard with me if I have another cord. Along with the USB connection we also have two USB ports on top of the Trigger. Along with the USB ports you have a 5 volt power connection as well, but the Trigger does not come with a power adapter. Normally, I will use the USB connection on my keyboard for my mouse to keep my desk free of extra cable clutter. In the case of the Trigger, I wasn’t able to do this. With the keyboard only using one USB connection you wouldn’t want the keyboard and your mouse competing with polling the USB bus, but on top of that there isn’t enough power. The Trigger uses its own MCU and controller along with its full LED lighting, all of those pull power, making the Trigger the most power hungry keyboard on the market (over USB at least). All is not lost; you can pick up a power adapter for more power to the two USB ports on the trigger if you need it. In my case, because I want to use a mouse, I will just have to deal with another cable across my desk.

I spoke before about how when the feet are flipped up on the bottom of the Trigger there are rubber tips on the feet. How did they perform? Well when pushing the Trigger did lose a small amount of grip over the three large feet, but in actual use I never had an issue with the trigger moving on me at all. If anything I noticed that if I pushed my keyboard forward the feet would grab and grip so well that they would flip over, not a bad problem to have if you ask me.

So how are the Chery MX Green keyswitches? To understand them you need to understand where they fit in with other Cherry keyswitches on the market. For those of you who aren’t formiliar with mechanical keyboards. There are four keyswitches that are most used, all are from the manufacture Cherry. The four switches are all MX type and the color’s help set them apart. You have Blue, Red, Black, and brown normally. Green is fairly rare other than use just on spacebars and there are other models as well that are even less well known. Here is a breakdown of the switch actuation force as well as the key “feel”.

Being able to see how the switches break down helps understand the differences between the different switches. The Green switches stand above the rest with a much higher actuation force needed. Otherwise they are just like the Blue’s that most people really enjoy. Personally I prefer Browns due to their low actuation force, tactile feel, and low noise level. So what’s it like using the green’s day to day? Well I adjusted quickly to them once I was able to get over the noise that they do create. They do require more force to use but remind me of my old Intel Model F days (late Model F’s required 80cN of force as well). I don’t think that the green keyswitches are for everyone, but if you are a big fan of Blue’s you should try out a keyboard with green switches if possible, you might be surprised! 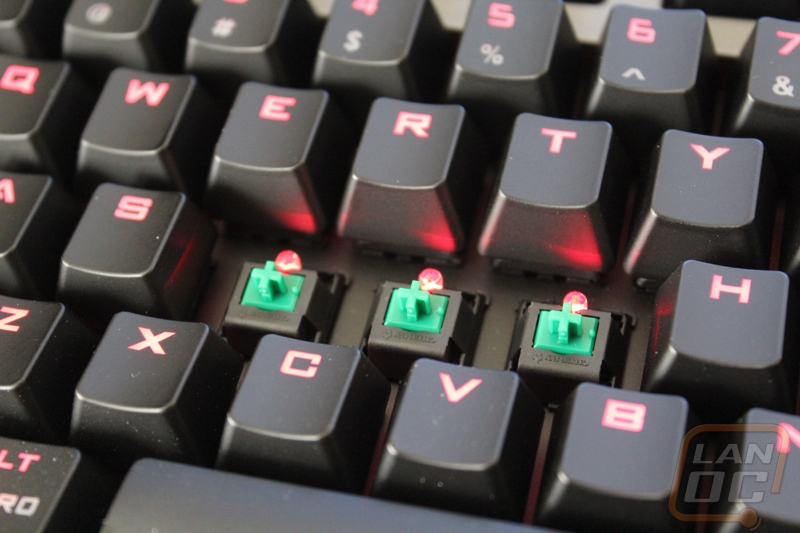 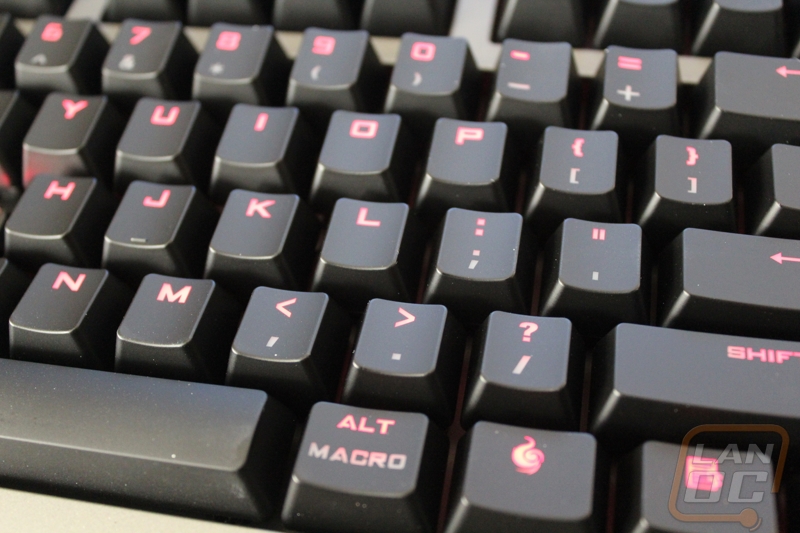 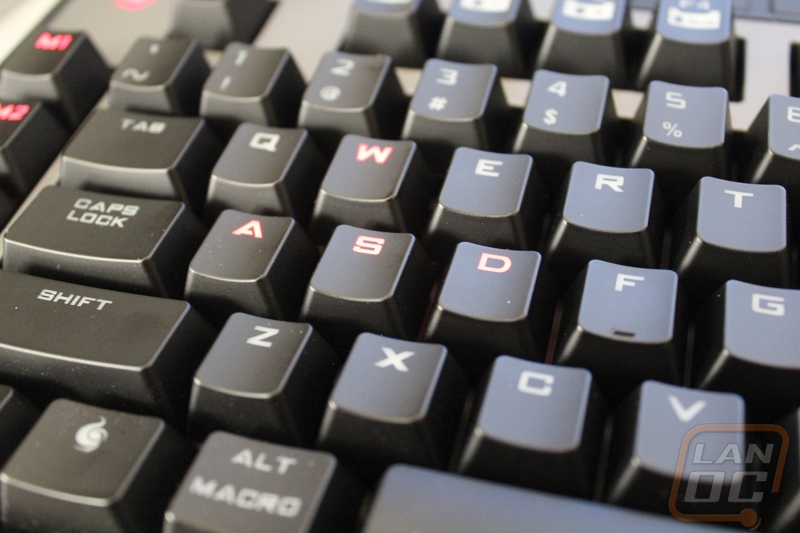 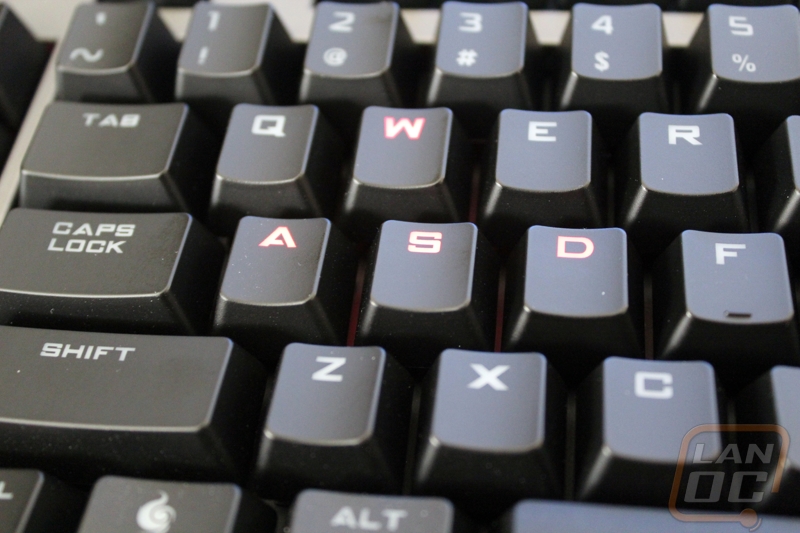 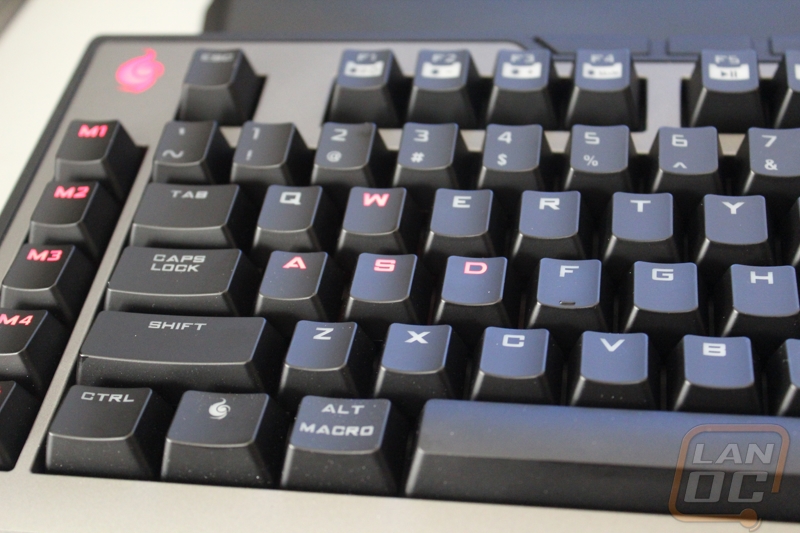 garfi3ld replied the topic: #30262 03 Apr 2013 03:50
I think you guys will especially like the breakdown on the differences between all of the Cherry keyswitches in the performance section

SpeedBump replied the topic: #30263 03 Apr 2013 05:45
Good review. I have the "blue" version of this keyboard. It is my 2nd mechanical. I have never really considered mechs before due to the high price (compared to a normal membrane style) Over the years I have come to a point where I went thru multiple brands and found my favorite. The Saitek Eclipse.

I had gone thru a couple of them before jumping onto the mech bandwagon. My son bought his first mech...Razer Blackwidow Ultimate...and I used it a handful of times. Kinda found out what all the excitement with a mech was. Really liked it and when gong back to my trusty Saitek, I was kinda sad. Decided to get myself a Mech. At LAN OC v12, you had a Mionix Zibal 60 with blacks. I didn't win it, but I did buy it from the guy who did. Very sweet keyboard. I didn't like the black key switches. For gaming, they were just too stiff for me. For typing, I liked it alot. Kinda backwards as most guys like the blacks for gaming and not as much for typing.

This Trigger I am using right now...I absolutely love it. It has seen constant use for a couple months now and is holding up nicely. I am starting to notice some wear on the keys. I use my right thumb for "space" and you can plainly see the spot where my thumb presses. The other keys are also showing some "shine" but being small, you can't really notice it. The wrist rest is showing no signs of use. Looks like day one. That is a good thing as I figured the rubberized coating would more than likely show some wear especially around the arrow keys. ( I don't use WASD keys...LOL) I don't think I would like the green switches as they are stiffer than the blacks.

Sorry for the wall of text, just figured I'd toss out my take on the durability of the Trigger in case some guys were wondering. Thanks for the review. Spot on imho.

Masterfry replied the topic: #30314 08 Apr 2013 05:40
I've been thinking about getting a new mechanical keyboard and trying a new switch. I want to try something really stiff like almost buckling, and I want it to be loud as hell because lets face it, that's why we get mechanical keyboards

The green switches seem like they would fancy my taste buds but I'm looking for something without the ten key. I'm considering one of the Ducky's but not sure yet. Anyways, great review and thanks for the detailed information on the keyboard.

www.amazon.com/dp/B00C2MBG2U/?tag=lare0a-20
(the amazon option over on the right side is cheaper when you figure in free shipping)

Also has anyone else gotten green switches back in? At CES Cooler Master told me they bought up all of the green switch stock for a while. The ducky shine with green switches shows as unavailable on amazon as well.
Read More...