Performance
Much of how Logitech has designed the G600 has been aimed at reducing fatigue, which is a great idea considering the target demographic. You don’t have to be a hardcore MMO player to appreciate long gaming sessions; anyone who has been to a weekend LAN knows the feeling. There are two key areas designed for this.

The first is the shape of the mouse, which I’m a huge fan of. Especially for the massively genres, it’s nice to have all of the hand in a comfortable position and be able to cast with more than two fingers. Logitech nailed the form of the G600; it feels great to hold.

The second is the buttons, and this is where I back tread on my previous statement a bit. While the mouse fits the the hand very well, maneuvering the mouse doesn’t come so natural. If you’re used to a solid thumb rest, retraining your pressure points is going to be difficult, as there isn’t anything but buttons under the thumb area. Regardless of your preference in the grip style theory, the majority of us use thumb and ring/pinky to actually guide the mouse. There is a nice textured area for the pinky to grip, but putting the same pressure on the thumb side of the mouse is likely to activate one of the buttons. 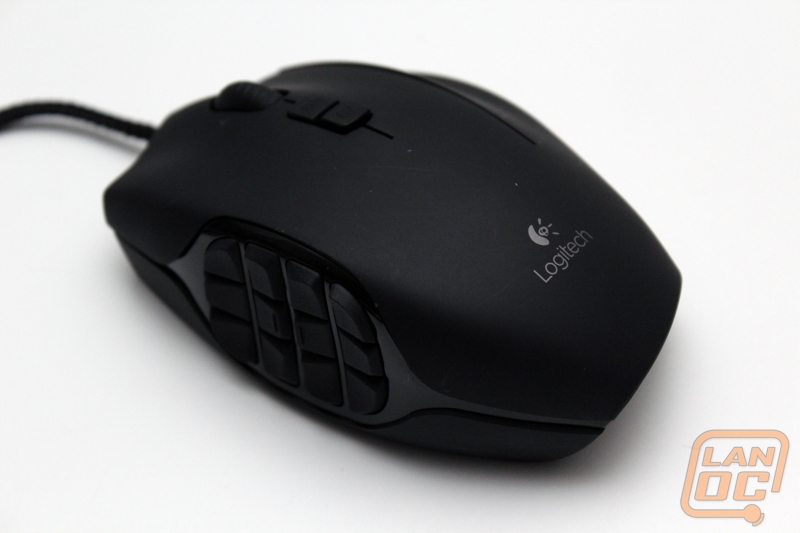 Thankfully, the thumb bank (G9 through G20) do have a bit of resistance, to help avoid accidental clicks and give you a little window of pressure, but it’s likely to take some retraining. So when Logitech says that “each button is tuned to reduce click fatigue”, it is not equal; the left and right mouse button actuate much easier than the thumb keys, for instance.

The scroll wheel left and right click is a great feature for gamers and casual users alike. It provides two very accessible activates, and again the actuation is done right. The G600 scroll wheel has a potential of five actions, but each takes the right amount of pressure to prevent accidents (clicking the wheel down when you want to click it right, for example). It’s a great productivity option as well to use as horizontal scroll, unfortunately there is no actual function built into the software for this. You’ll have to record left and right arrow key strokes as a work around.

The functionality is still there, and I was pretty surprised to see it amongst other non-gaming productivity features, such as the text block option, which could allow a receptionist to enter a mailing address from one click of the mouse. Each of the twelve thumb buttons could be commonly used addresses, almost like a speed dial!

The G-Shift and Mode shift are a great way to add more actions, but there is a documented problem with this system. ‘Shifting’ the buttons will send an ‘up’ signal to any keys that are currently pressed. An example: you’ve depressed the middle mouse button to run, chasing down your opponent in the arena. You want to cast a skill that is bound to a G-Shift button, so you press G-Shift to switch over. Even though you never release the middle mouse button, switching like this will tell the mouse that you did, you’ll stop running and your enemy gets away.

The software is otherwise a complement to the G600, which honestly can be a little overwhelming in the amount of customization available. It is a little disappointing that choosing to program the mouse for travel restricts many of the features, but the reasoning does make sense. If you want to take full advantage of the actions available with the G600, it’s best to pair it with your own system. Like the majority of software suites, the Logitech Gaming Software will rest idle in the taskbar, ready for quick launch when needed. There were a few times during testing that I found the software unresponsive or unusable, with a glitch that seems to replicate the top half of the screen to the bottom. All it took was a force close of the software and a relaunch to remedy this issue.

Logitech has included some really nice features in the software, such as the lighting sleep timer. The Ventrilo integration is much appreciated since LanOC hosts our own server, but I’ve used enough other voice communication solutions to be disappointed that it’s limited to just the one. I was hopeful that even though it says Ventrilo push-to-talk that other programs may recognize it as well, but after trying Mumble and Teamspeak, I can confirm that it unfortunately does not. 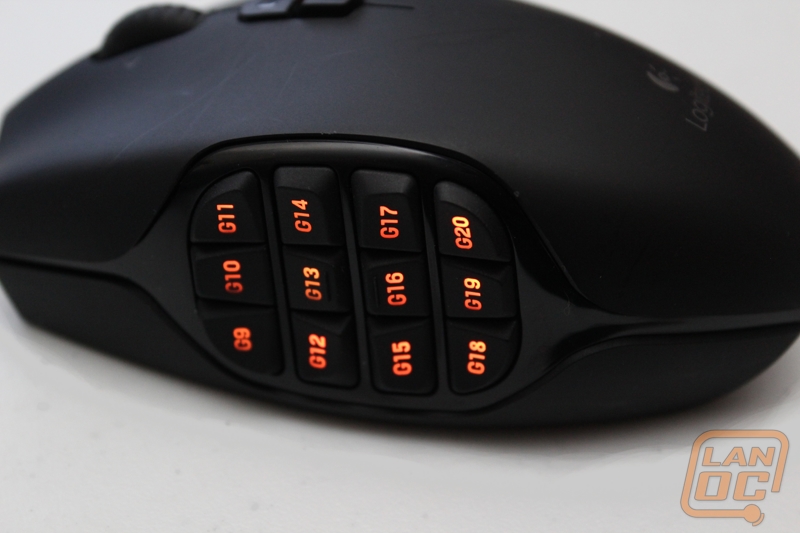 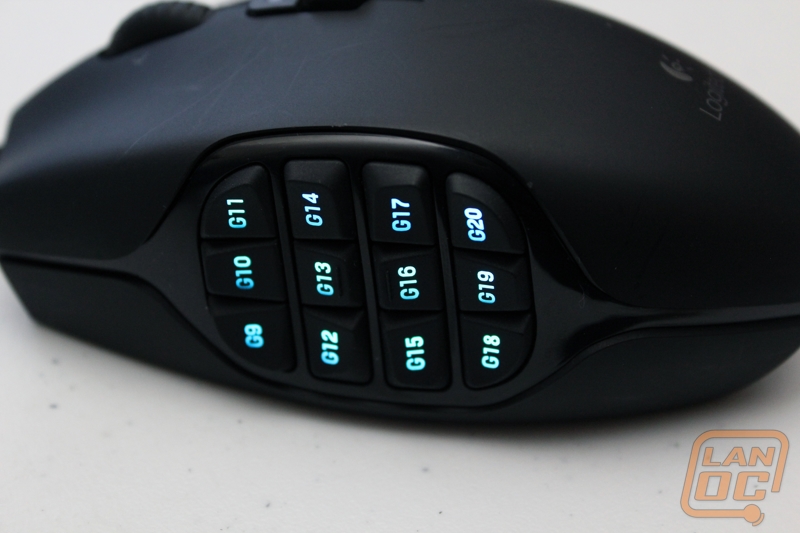 In theory, the idea is perfect: a plethora of commands within the reach of your fingers. In application, I had to relearn how I used my mouse, which was something I was more opposed to than I thought I would be. Even after using the G600 as my main mouse for several weeks, I don’t think I use it as completely intended. I started off slow, focusing on just the bottom six buttons of the thumb bank, which surprisingly well, especially for MOBAs that have exactly six item slots anyway. The buttons are arranged three by two, just as your inventory is on screen, so it’s easy to associate the bindings.

I even went as far as as disabling the G13 key to give my thumb somewhere to put pressure without activating anything. It worked great as I added the remaining buttons to my comfort zone, since they surrounded G13, my thumb’s home, I knew that I moved down for items and around for other activatables. In the end, I may have done myself more harm than good, as I’m having a hard time actually using G13 when assigned (and not accidently pressing it).

Finally, you may have already figure this one out, but the G600 is not lefty-friendly. You could, in theory, bulk your pinky up to be able to control those twelve keys and if you do, please send me a private message.