It’s that time of year again, the latest Call of Duty offering was just released and I (and most of the LanOC staff) has been gaming it up. Knowing that we were planning on playing, when SteelSeries introduced their Black Ops 2 peripherals, I quickly hit them up to get a set to use while we played Black Ops 2 at launch. Our coverage on the game itself should be up next week after a weekend packed full of gaming, but for now you can see what SteelSeries has to offer while you wait. 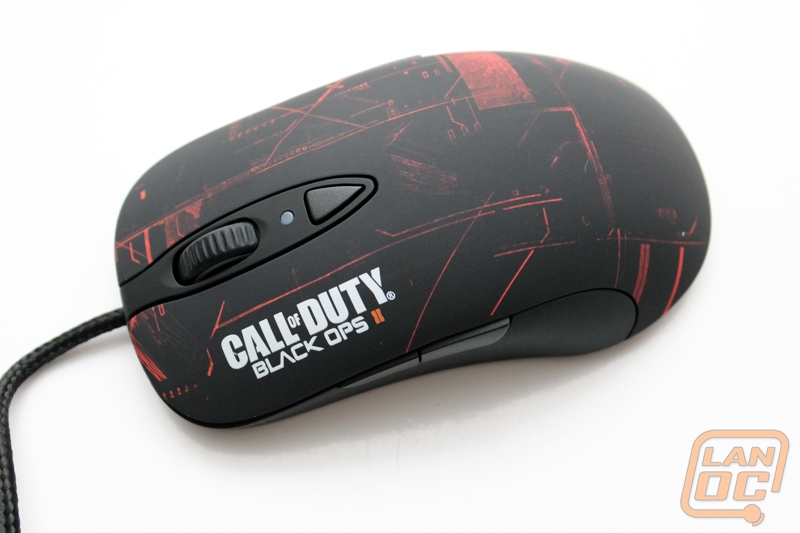 Having taken a look at the Diablo III and Guild Wars 2 mice, the packaging for the Black Ops II mouse was basically what we have seen before. The cover has a top down photo of the mouse showing off all of its artwork, you also have the Black Ops II logo and the image of the guy kissing or praying with his gun in the top right corner. The cover opens up and allows you to get your hand on the mouse itself and to get a better look at its artwork. Around back you have a little information including a specification listing, this is something they don’t even have on their website, so this is a great place to get info on the sensor as well as buttons and cable. Inside you get the normal collection of goodies including a SteelSeries sticker and product guide. 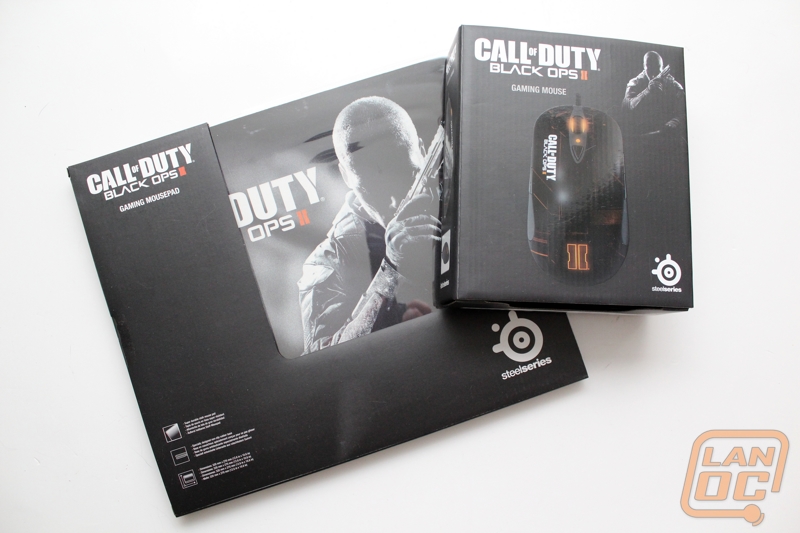 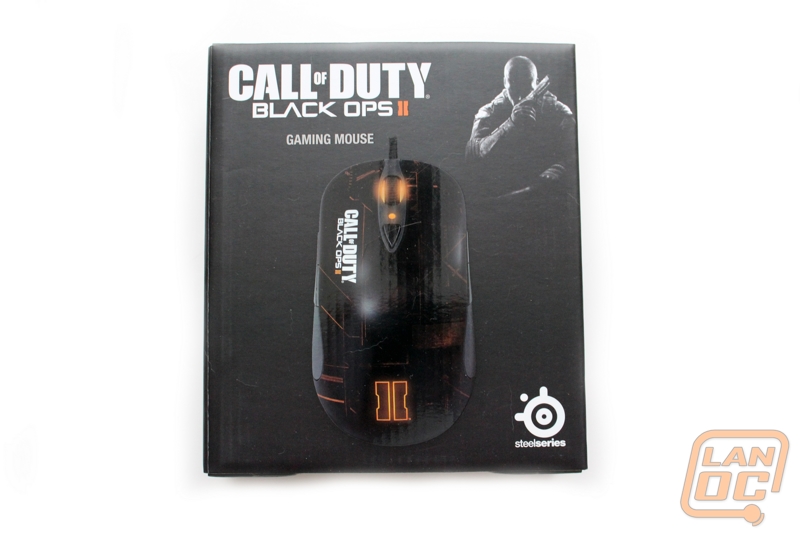 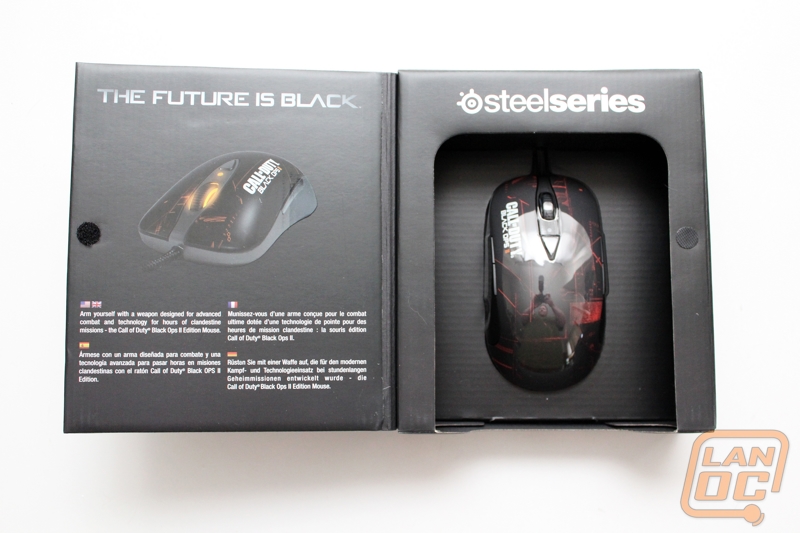 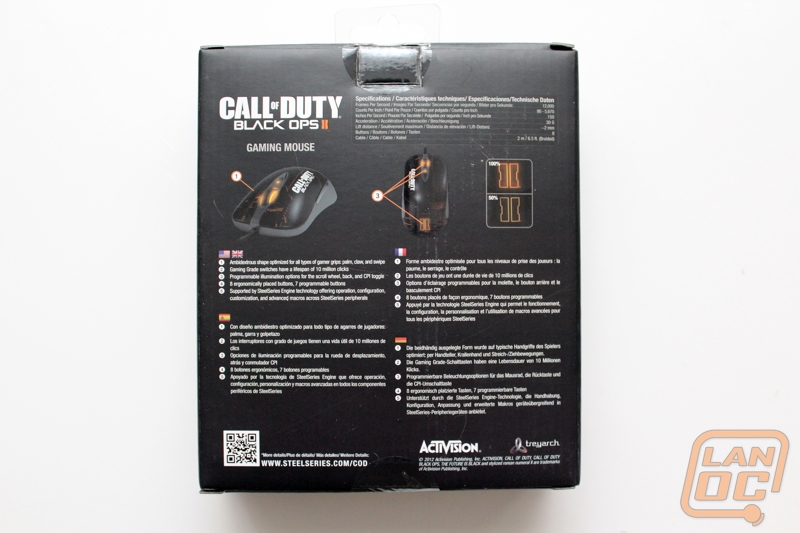 The Black Ops II OcK mouse pad comes in its normally packaging as well. You can see a good portion of the pads artwork through the window on the packaging. Around it you have an all blacked out package with the Black Ops II logo in the top corner. Information is very limited on the packaging really, the back has a short description repeated in multiple languages. Opening up the box to get to the actual mouse pad is a little bit of a challenge, you have to open the side of the box and slide out the plastic clamshell a specific direction, if not you will fit and end up tearing up the packaging. 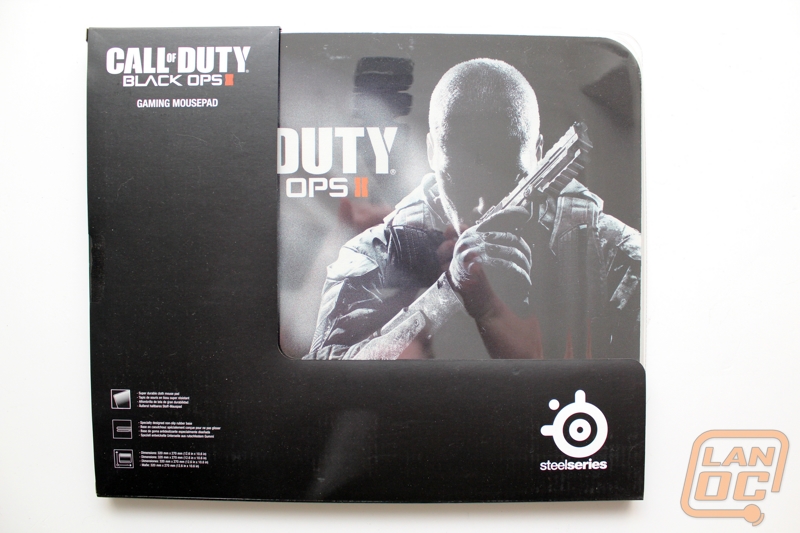 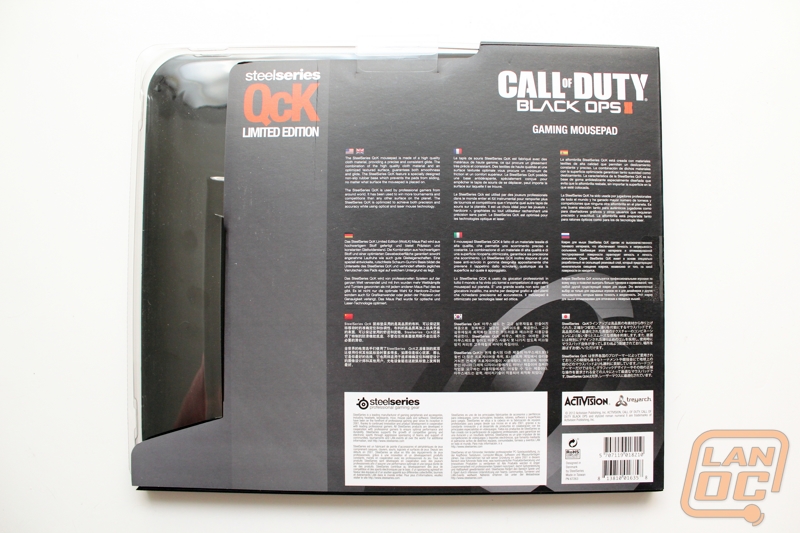 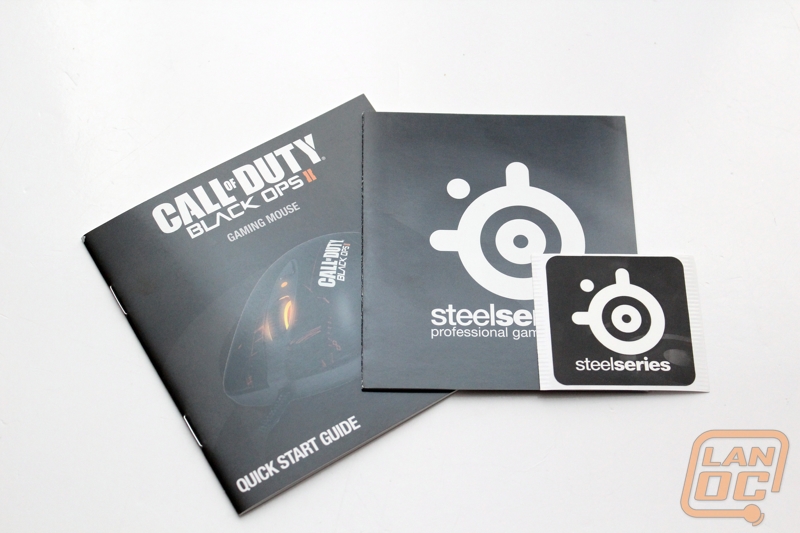 As someone who prefers a hard mouse pad whenever I can, I wasn’t sure what to expect with the QcK. Even more of a concern was the large artwork on the front; my past experiences with designs like this sometimes affect the surface itself. To my surprise, you can’t feel the artwork on the surface of the pad at all. The soft pad is silky smooth to the touch but gives just enough resistance when using a mouse on it. The size of the QcK is a little larger than what I normally need also, but not large enough that I would consider it an issue at all. My last concern was with its thickness, past soft mouse pads have been a little thicker than I would like. The QcK though is actually thinner than my LanOC Func mouse pad; it was hardly noticeable being on my desk. Last but not least is the artwork itself. SteelSeries has three variations, the one we received has the same praying black ops officer that we saw on the packaging of the Black Ops II mouse, but much larger of course. The other two design options are a variation on the logo’s themselves. All of the designs are sharp if you want to sport a Black Ops II themed mouse pad, because of that they do have a slightly limited appeal. I mean we are talking about a subset of Black Ops II fans that would be looking to show off their support. 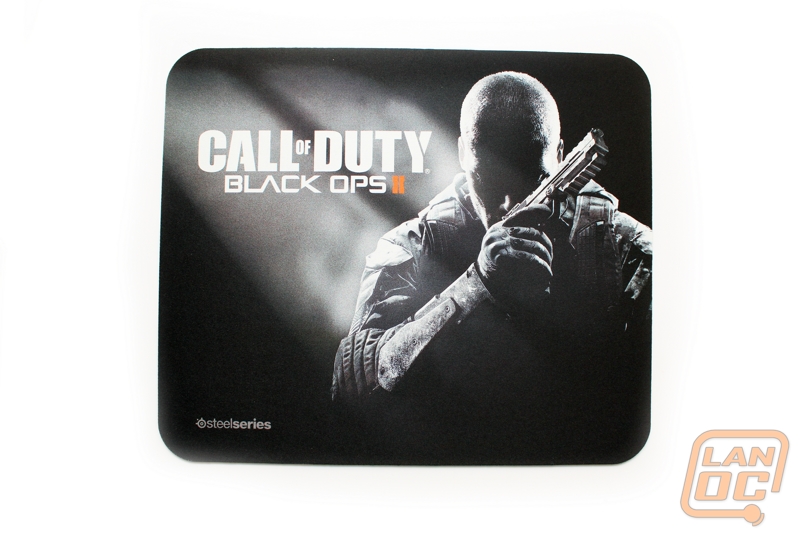 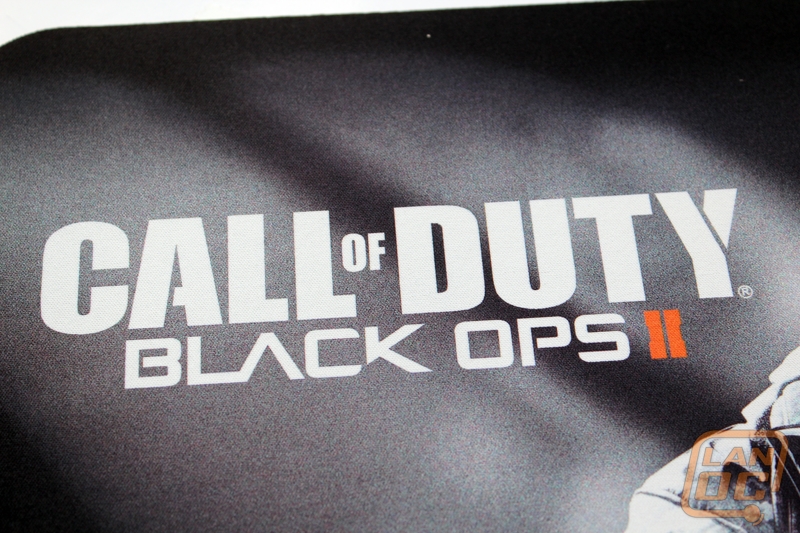 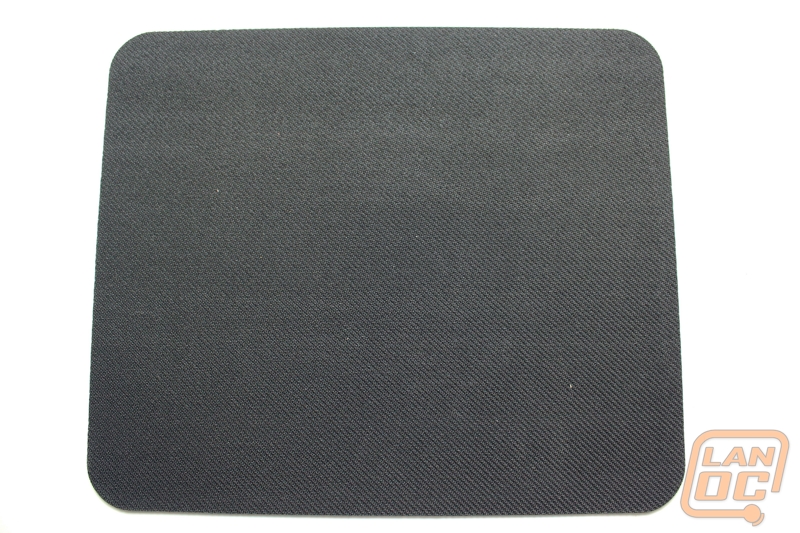 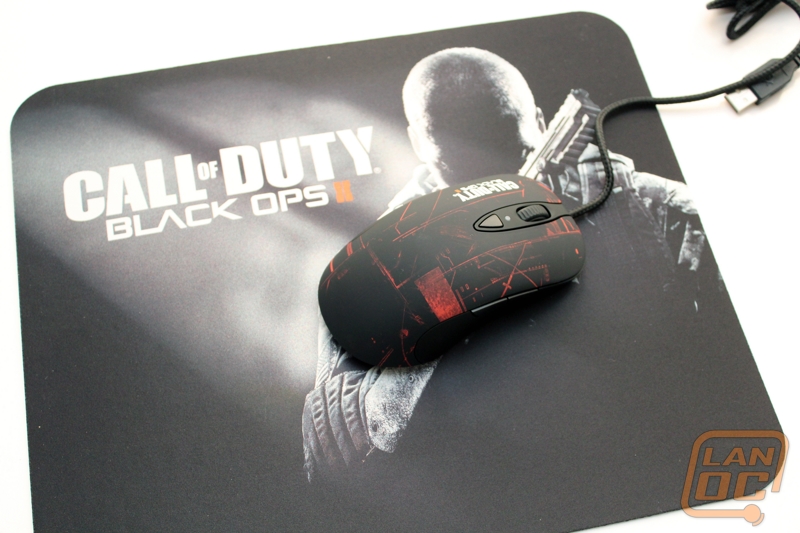 As a fan of SteelSeries’s previous mice including the Xai and the Sensei, when I saw the Black Ops II mouse it was clear right away that they used a combination of the Xai and the Sensei RAW, just like the Diablo III mouse. From what I can tell, this mouse uses the same Avago 9500 sensor that all of the other Xai and Sensei based mice use, this means that you can expect a little negative acceleration, but this is still my preferred sensor due to its feel and the lack of issues that the popular twin eye sensors have. So when it came to testing the mouse’s performance it was exactly as I expected, in fact my first couple rounds in Black Ops II didn’t go very well for me, I stopped and opened up the Black Ops II mouse and saw a noticeable improvement, simply because it’s a design that I have gamed on for years. 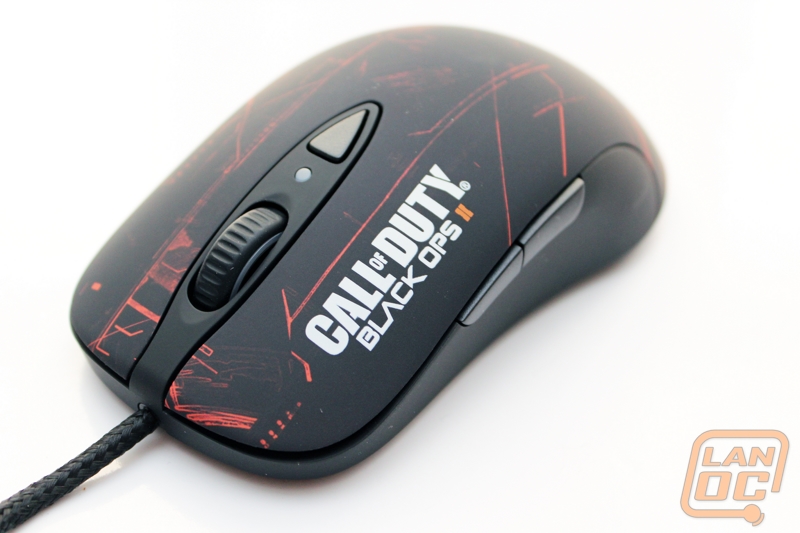 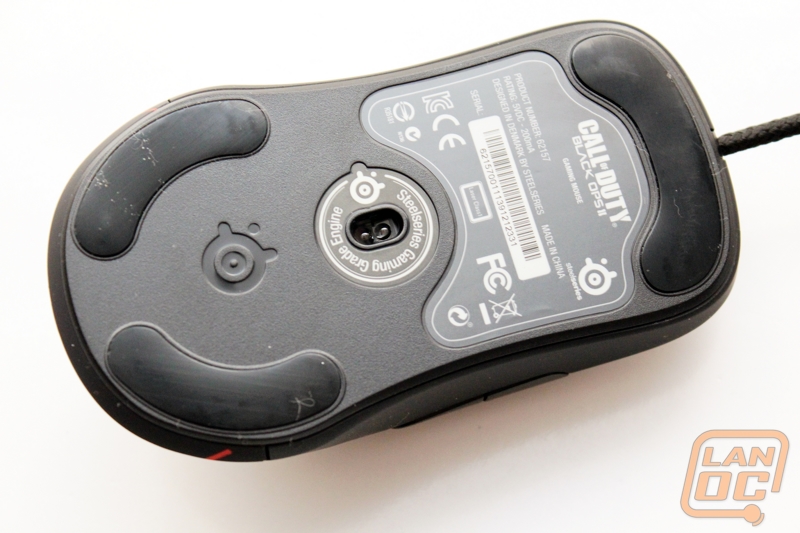 The shape and button layout on the Black Ops II Mouse is the exact same as the Xai and Sensei as well. This is the shape that really sets the SteelSeries mice apart from everyone else, because of that I was happy to see they didn’t change it. At first glance the shape doesn’t look like anything at all. That’s what makes it great, without any major gadgets sticking off of it, you have a perfectly balanced shape that works in your left or right hand. Each side of the mouse has two buttons and then you have the CPI adjustment button behind the scroll wheel. The button layout works perfect for me, my thumb lands perfectly in between them and I don’t have to worry about bumping any other buttons like on other mice that pack more on just to market a higher button count. 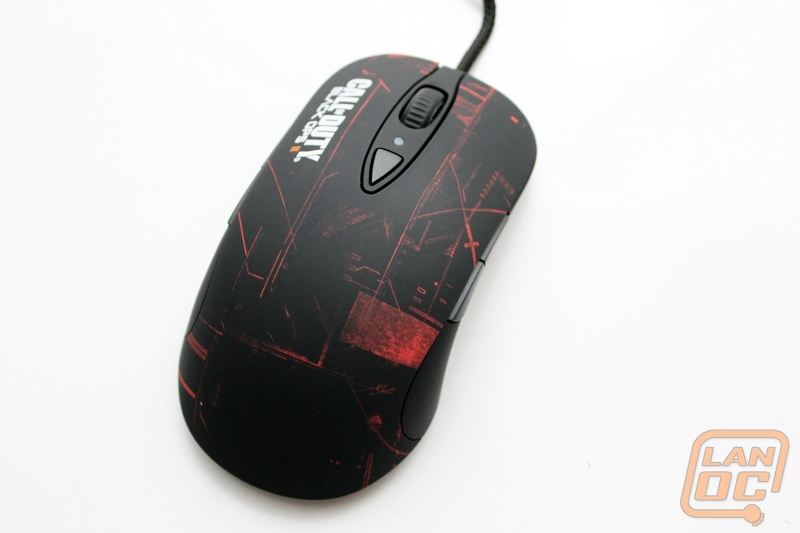 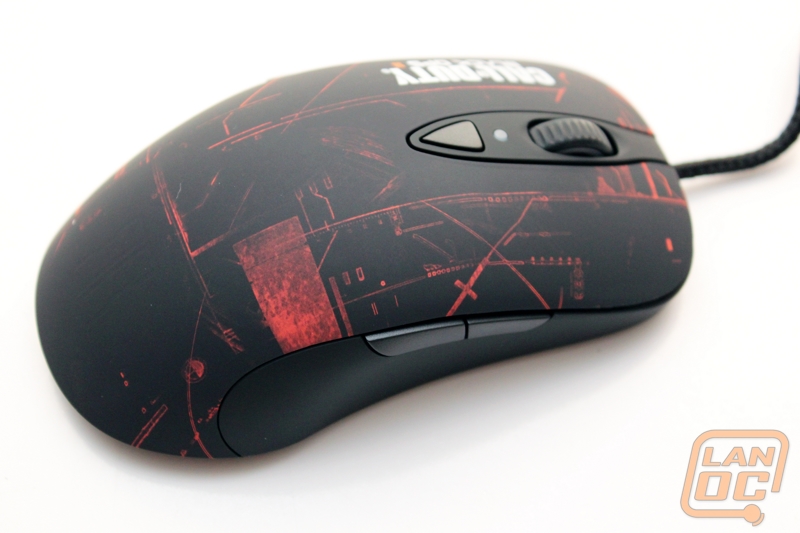 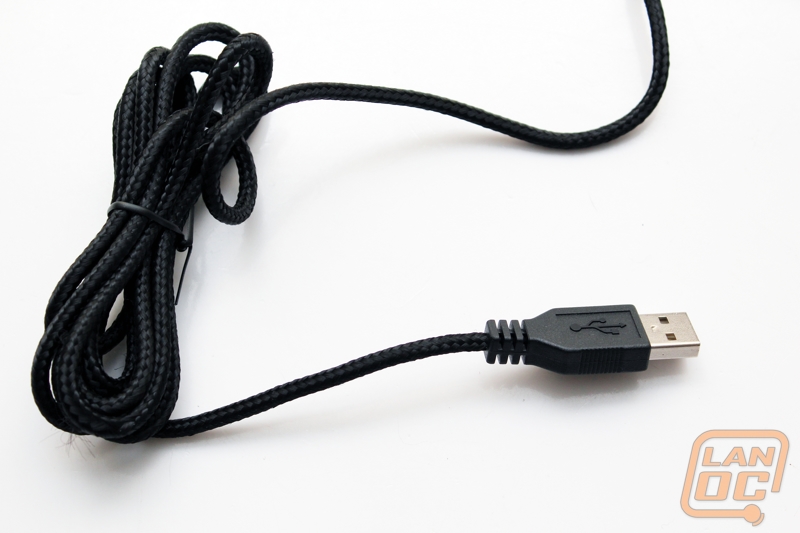 Much like the Sensei RAW this mouse has lighting on the scroll wheel as well as the back of the mouse and each is adjustable in the software. There isn’t an LCD screen on the bottom of the mouse to drive the costs up as well. Speaking of the lighting, they went with orange lighting on this one. It looks great with the design on the top of the mouse. I would like it a little more if it didn’t have the bright white Black Ops II logo on the trigger, but without it this couldn’t very well be called the Black Ops II Mouse could it? 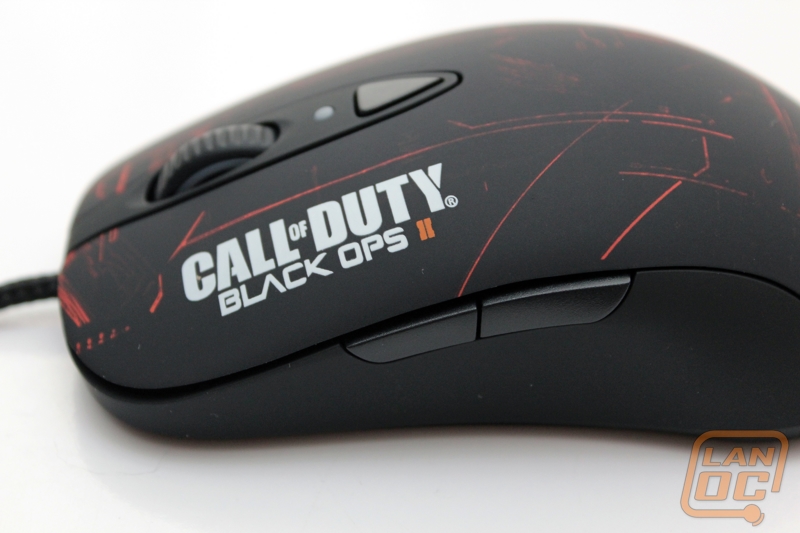 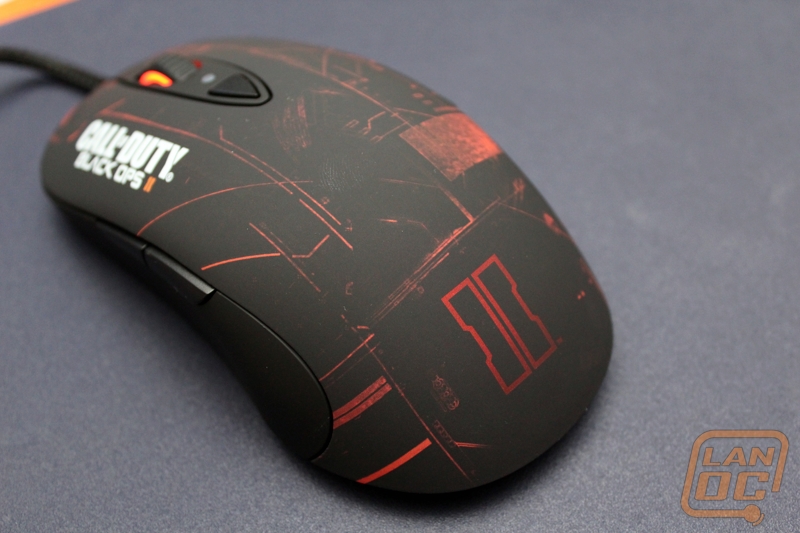 Last but not least we have the software. This once again uses the SteelSeries Engine but if you want the artwork that matches your mouse you will need to make sure to download the version specific to the Black Ops II Mouse. I hope they change this in the future, I would love to see it build in all of the skins for every mouse/headset or at least allow you to just download the skins and game specific key bindings as well. I know this is an issue that is going to bother me as a reviewer more than the average user, because I am constantly installing new SteelSeries products, but it just seems like the natural progression of their already great software. What if you had the Diablo 3 headset and the Black Ops 2 mouse, you are going to have to pick what theme you run and download it specifically. You can’t just swap out themes. 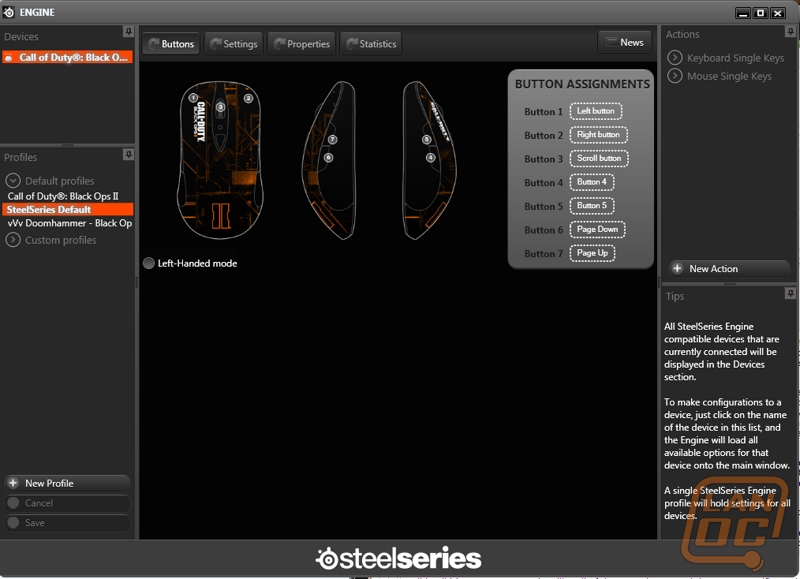 All in all it’s a great mouse, just like all of the Sensei RAW and the game specific models. If you are a fan of black and orange this would be up your ally, or Call of Duty fans as well. It’s not going to be for everyone, but that is why you have models for multiple games along with vanilla variations as well. 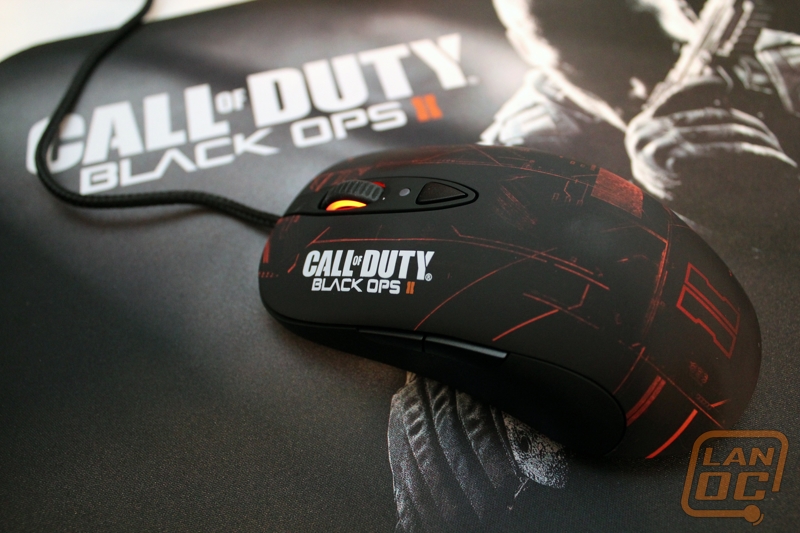 You might call him obsessed or just a hardcore geek. Wes's obsession with gaming hardware and gadgets isn't anything new, he could be found taking things apart even as a child. When not poking around in PC's he can be found playing League of Legends, Awesomenauts, or Civilization 5 or watching a wide variety of TV shows and Movies. A car guy at heart, the same things that draw him into tweaking cars apply when building good looking fast computers. If you are interested in writing for Wes here at LanOC you can reach out to him directly using our contact form.
Discuss this article
Log in to comment
Posts in discussion: SteelSeries Black Ops 2 Peripherals

draymac replied the topic: #28459 16 Nov 2012 23:21
I enjoyed seeing your reflection in the plastic that was over the mouse, lol. If that reflection is on all their packaging, I think I might just need to buy that thing!

Walmart had their price at $70. Seemed slightly high but I am totally out of it when it comes to mice pricing. Although, I did drop $100 on that WoW mouse...hmmmm, lol.

Thanks for the hands on impressions. Always interested in mouse opinions. So hard to shop for a "right fit" item that you can't test out before buying.
Read More...

We have 1781 guests and one member online