Diablo III mouse
I remember seeing the teaser shots of this mouse and loving what I saw. I was introduced to PC gaming with the original Diablo, a combination of it, Age of Empires, and an online game Graal ate enough of my free time for my concerned parents to force me outside most days. I was always impressed with the attention to detail Blizzard invested in the interface, in the lore, and even in the manuals. Playing on an awful in-the-county dial-up connection, I killed countless loading screens reading the stories and admiring the art that came with Diablo II. I felt the same nostalgia when I saw the Diablo III Sensei Raw. 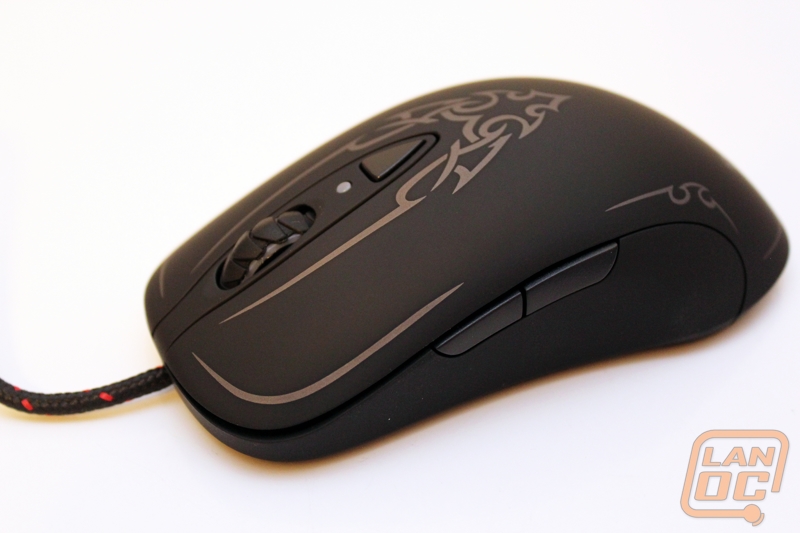 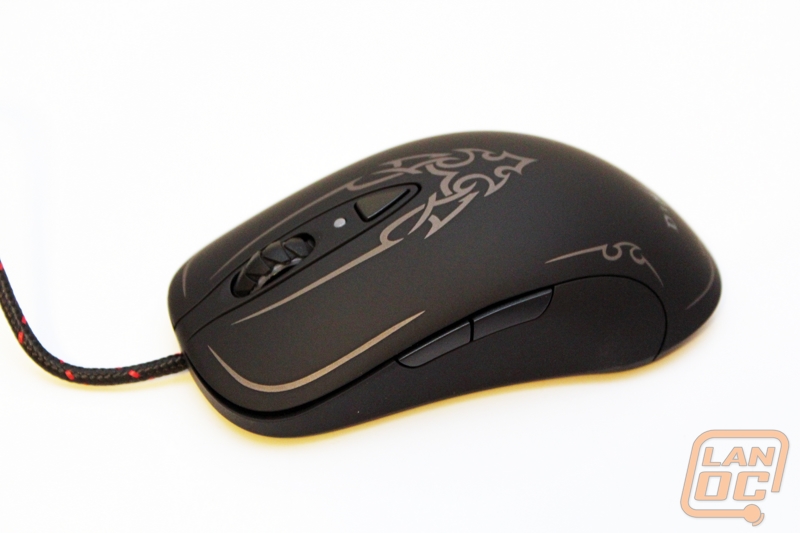 SteelSeries has mimicked that detail themed on this mouse. The shell is a dark onyx, not quite black, bordered with the architectural weavings that are present in the game environment. The scroll wheel resembles dark coal with embers glowing underneath, functionally riveted for the finger to grasp and turn easily. Matching with the under glow is a pulsating Diablo III logo on the palm. Even the braided cord has red fabric stitched every now and again to pay homage to the burning world that inspired it. 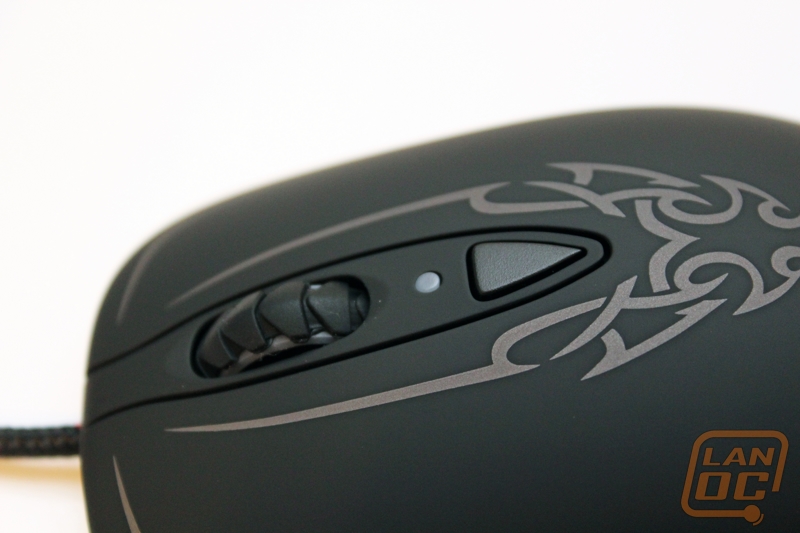 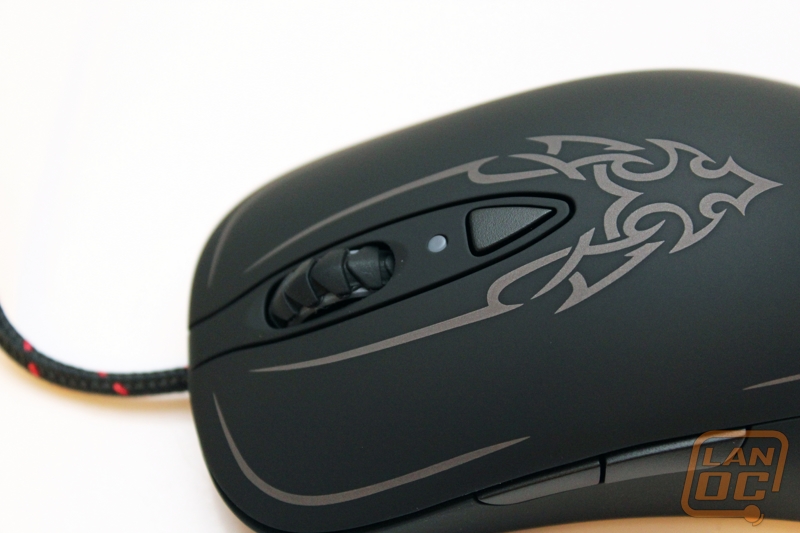 How do these facial upgrades translate to functionality? From a company that has built a reputation by focusing on performance over appearance, it’s understandable to be skeptical. Let’s start with an obvious one: Diablo III, truly any Blizzard game, requires a lot of clicking. Enough clicking that one begins to wonder just how many times you’ve clicked (hold on to that thought, we’ll revisit it in the Software section). SteelSeries has built the Diablo III mouse with Omron switches, which guarantee 10 million lifetime clicks. In fact, I’ve been using the D3 mouse on my main gaming rig since it released, before we received our review sample. Not only do the switches and scroll still accentuate like new, but the decals have maintained, something I was concerned with after seeing the wear of my previous main mouse. Taking the mouse to LAN parties has also been a non-concern, since the cord we talked about is actually double-braided and plated gold to ensure a lifetime of plugging and unplugging. 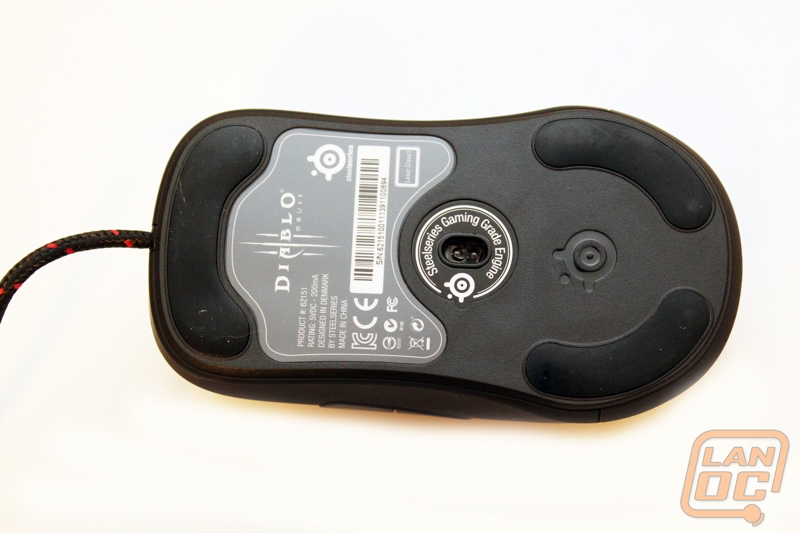 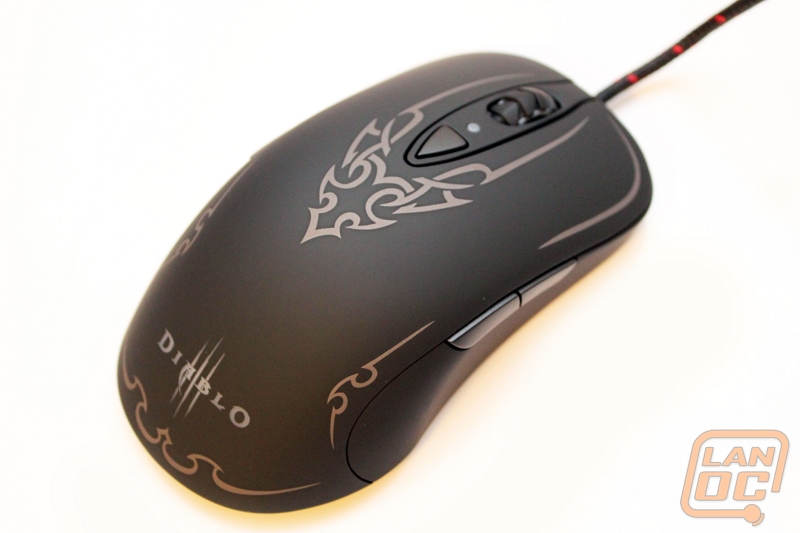 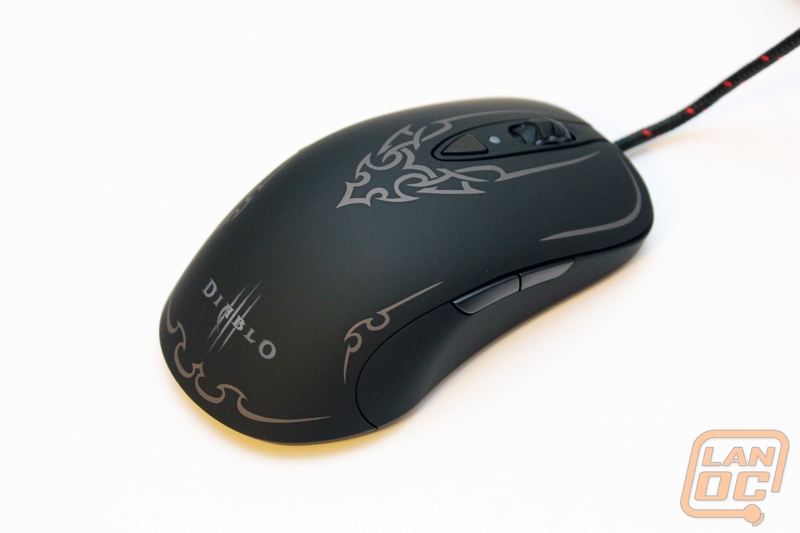 A few more subjective statistics include a CPI scale capping at 5,700 and a lift distance of approximately 1mm, for those grip styles that lift the mouse when moving. The mouse is also designed to be ambidextrous, so lefties and righties alike can slay in comfort. This is achieved in part by positioning symmetrical, mappable buttons on both sides of the mouse, which combine to a total of 7 programmable buttons that can be assigned within the software. 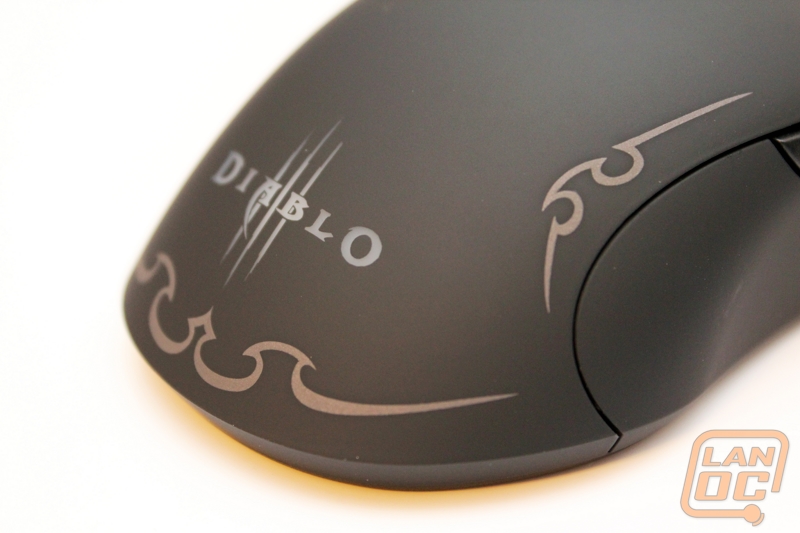 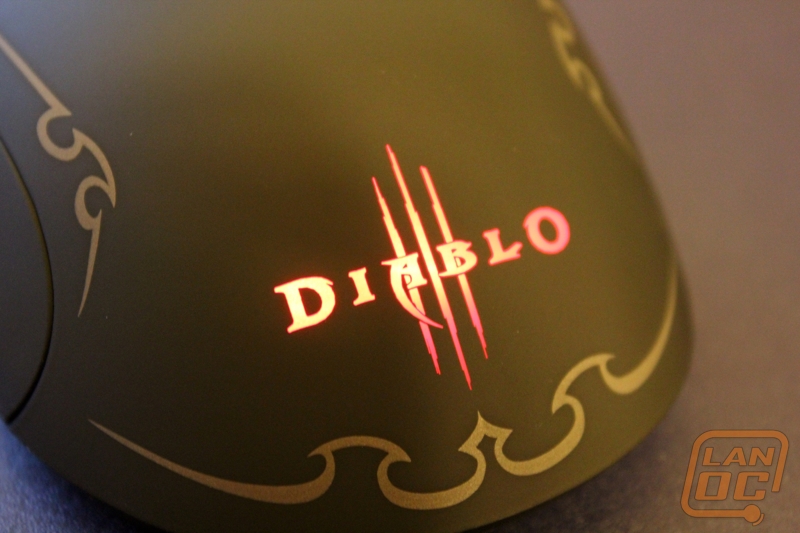 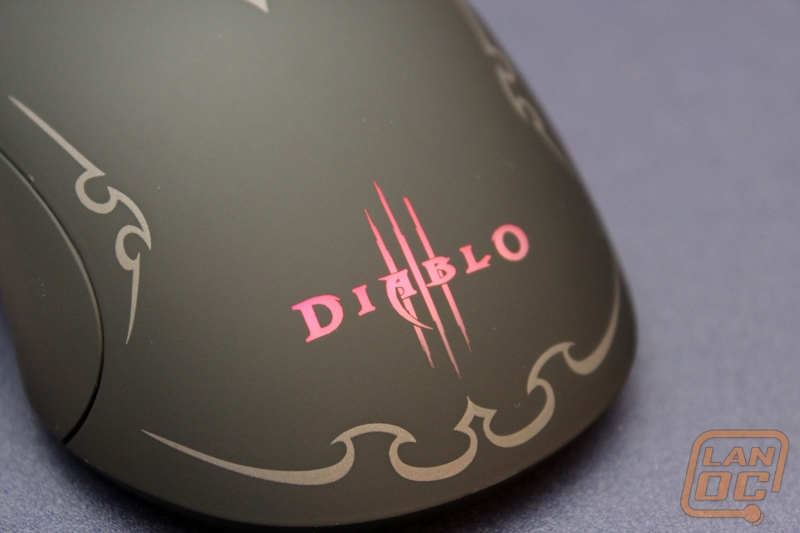 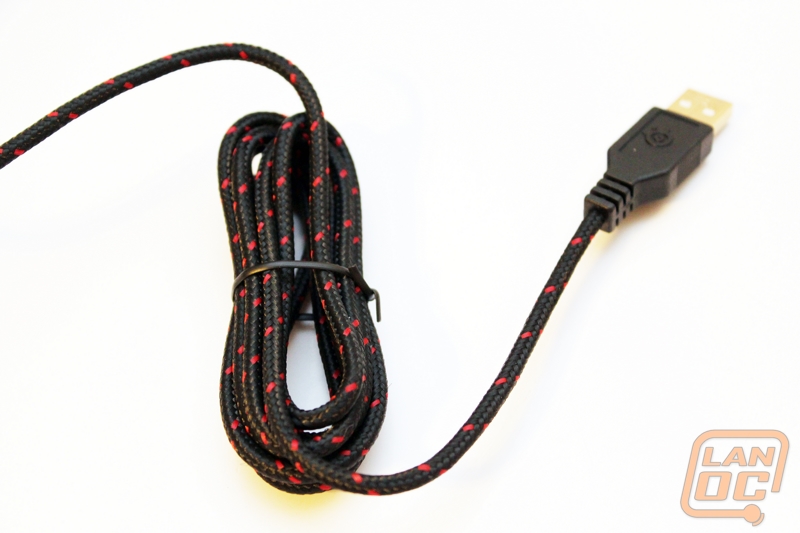 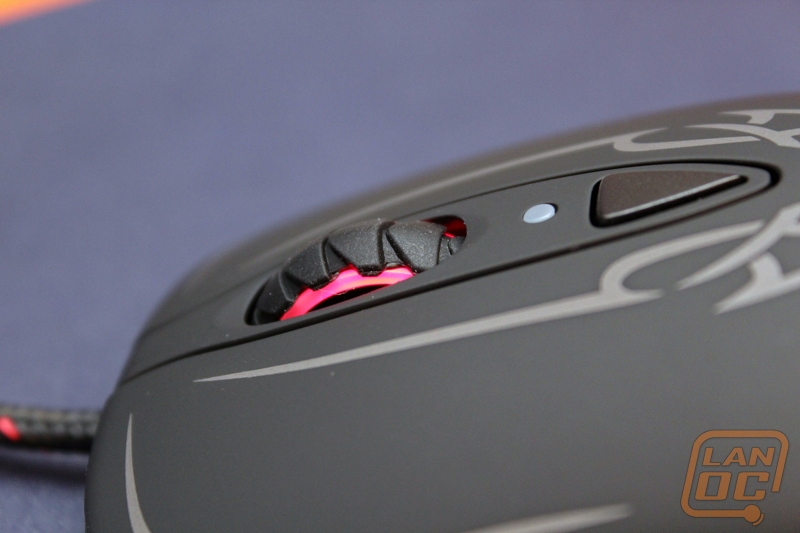 The software uses the SteelSeries Engine, a suite that combines all SteelSeries product software into one program. The Diablo 3 editions are unique when compared to other SteelSeries products, they actually create a theme for the Engine, transforming the grayscale UI into one based on the color palette and designs of the Diablo universe. 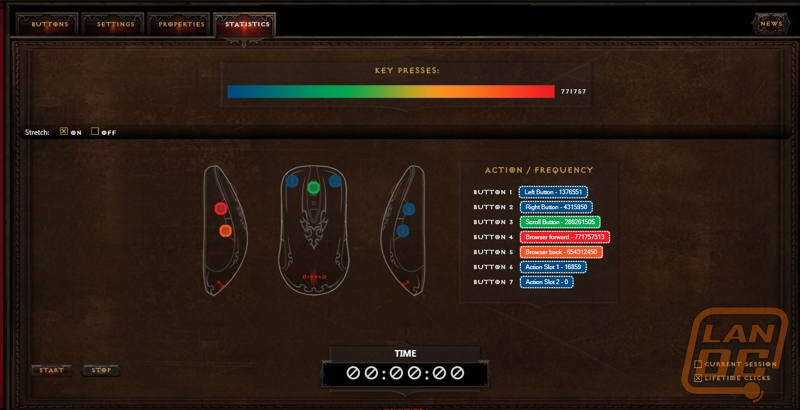 When the Diablo III mouse is selected in the device menu, the center screen becomes populated with four tabbed options and a corresponding menu for each. The Buttons tab features the mouse in a ‘mug shot’ manner, with side and top views calling out each button and assigning it a number. The corresponding number can be set to an action or macro via a drop down menu, while multiple profiles can be made depending on what game, or class, you are playing. The Properties tab is used to further customize the profile, and set it to auto-switch when a game executable is launched. 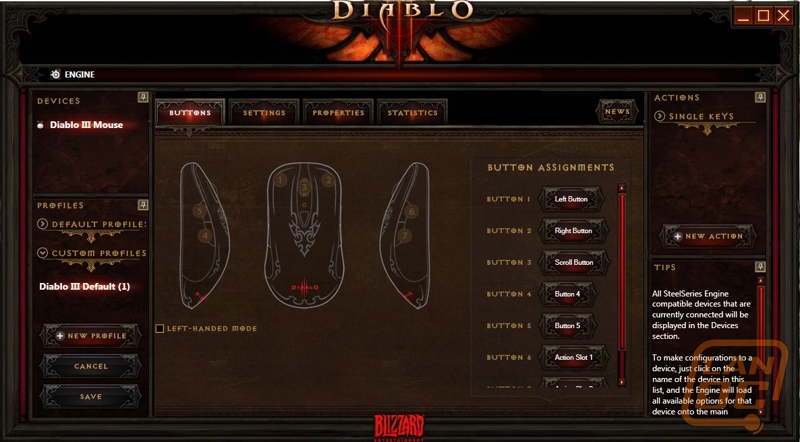 The Settings tab collects the features such as CPI and Polling Rate adjustments, and allows customization of the LED illumination with intensity and pulsating speeds. 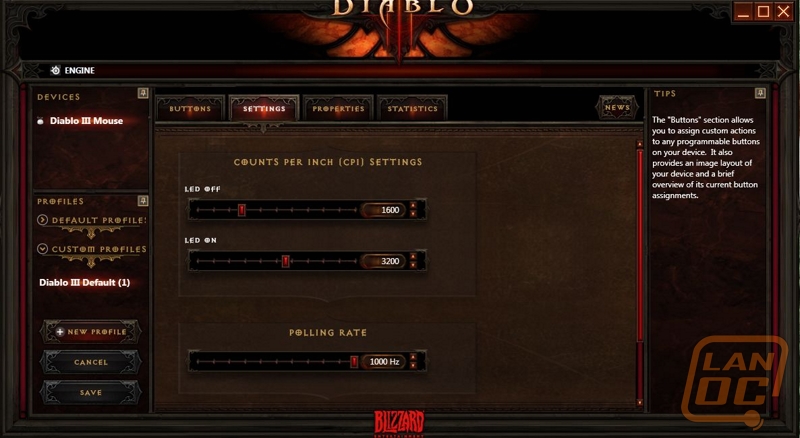 The final tab, Statistics, is a really neat tool. I mentioned before the idea of tracking clicks, and SteelSeries has begun adding this function to a lot of their mice, the Diablo III version included. It seems fitting, since Blizzard is the company that introduced the idea of action per minute (APM) to me. This tool lets you record the key presses during a timed interval and displays the results by button in both numeric and visual form (and a scale of cool color to warm color, depending on the amount of use). Unique to the Diablo III version is the Lifetime clicks option, which, as you guessed, displays the lifetime clicks of each button. The results, as you can see, are quite impressive… 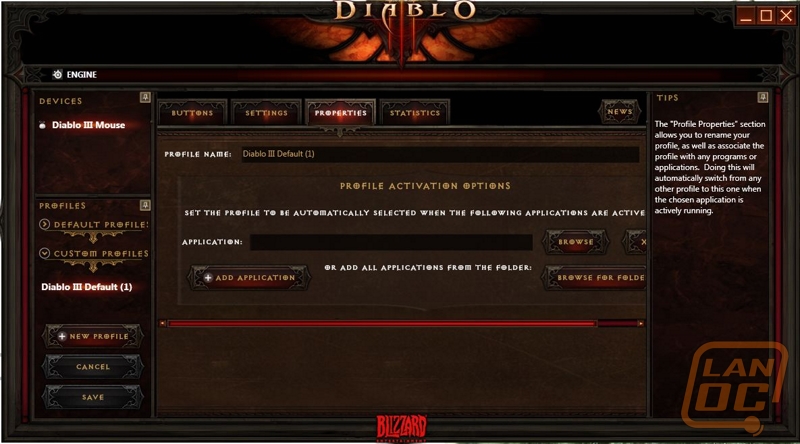 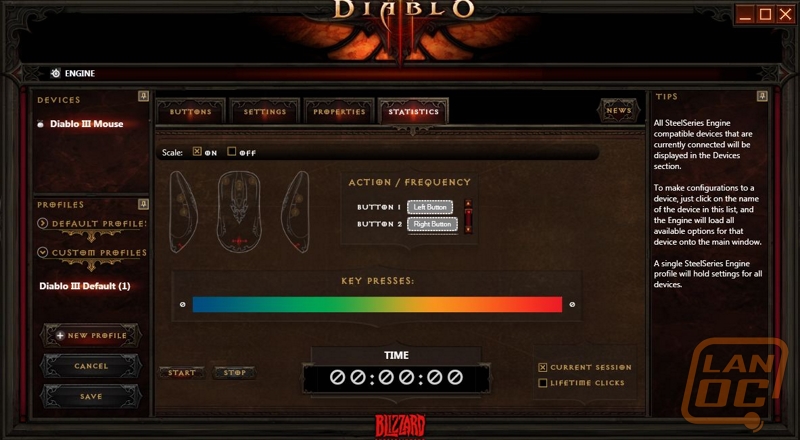 We have 1427 guests and one member online