Here at LanOC Reviews we consider ourselves to be fairly picky with our mice reviews. We are still one of the only sites to bring to light the Z-Axis tracking issues when we come across them and as a whole we hold every mouse that comes into the office to a very high standard. Typically we only see mice from the usual suspects (Razer, Logitech, Steel Series), but sometimes we get a chance to take a look at a mouse from an up and coming manufacture. Today is one of those days. We are going to take a look at a mouse from Tek Republic designed for gaming. Being new to the market I am hoping to find a gem, or at least a few new ideas. The only way to find out is to put it through our testing and you know what that means right? I get to game and act like its work!

The TM’s packaging is fairly basic with an all-black design. On the front you have a photo of the mouse itself along with the TekRepublic logo. Around back you have all of the specifications listed in four different languages. Along the bottom of the back there are a few small logos that mention a few of the TM’s features like the weight tuning system, 6 DPI shift, and full speed USB 2.0. Back around at the front there is a front flap that opens up to reveal the mouse itself. The back side of the flap has a line drawing of the mouse and breaks down the mouse’s features along with their locations. The other benefit to the opening flap is the chance to try out the shape of the mouse before purchasing, the plastic is formed around the mouse giving you a good idea of what to expect. 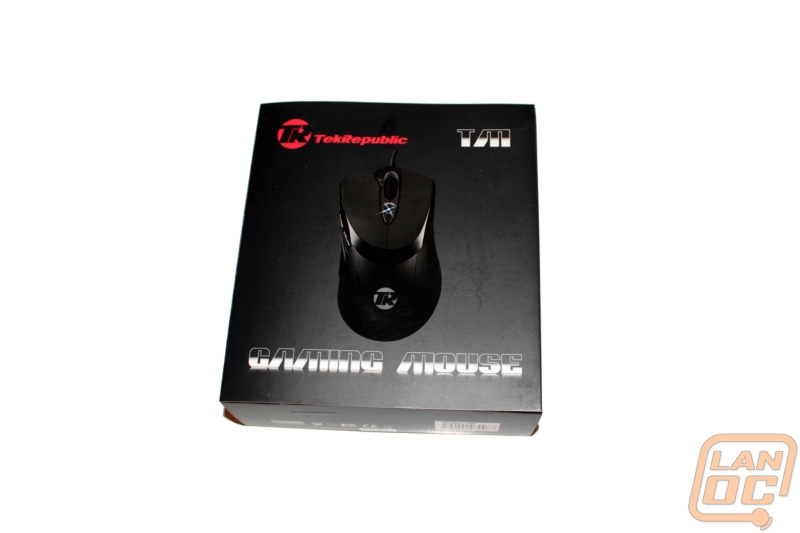 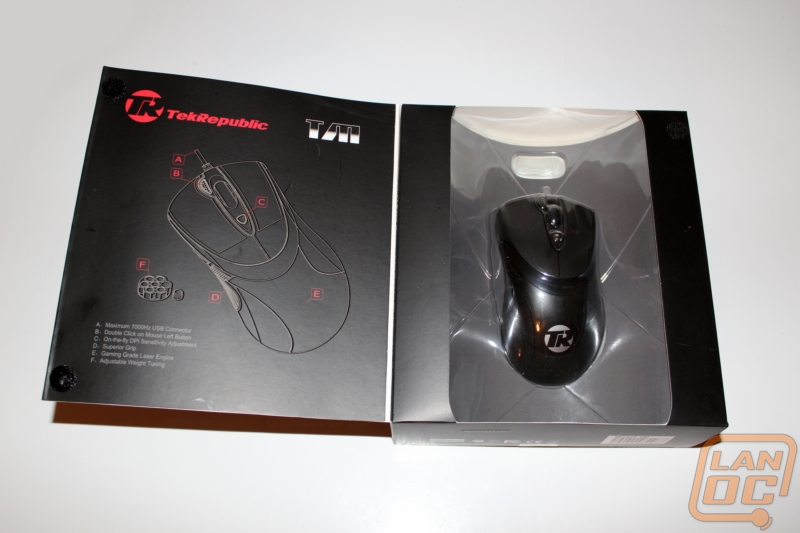 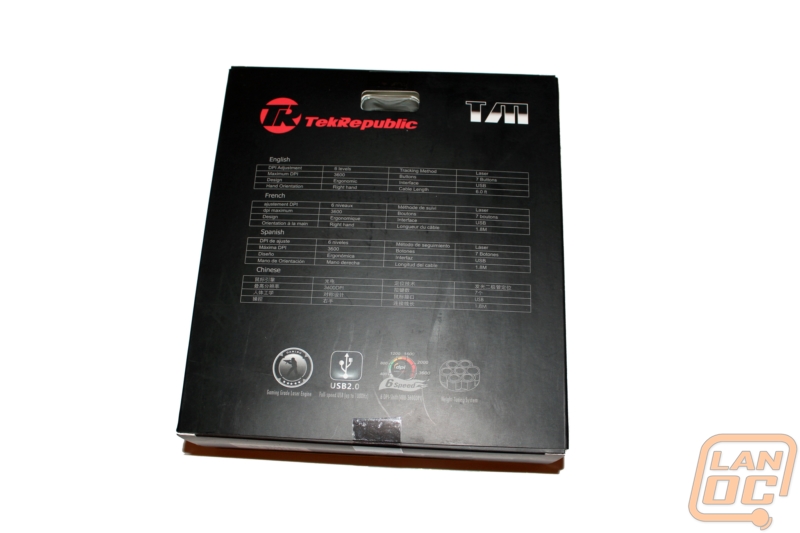 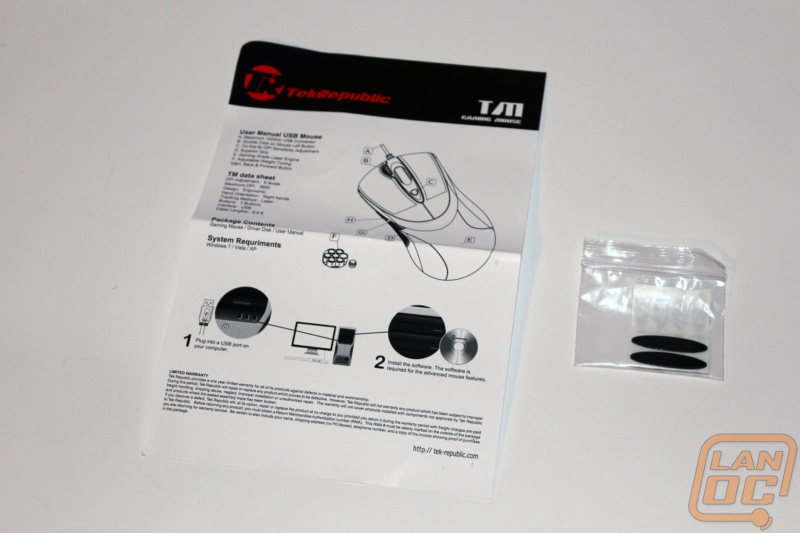 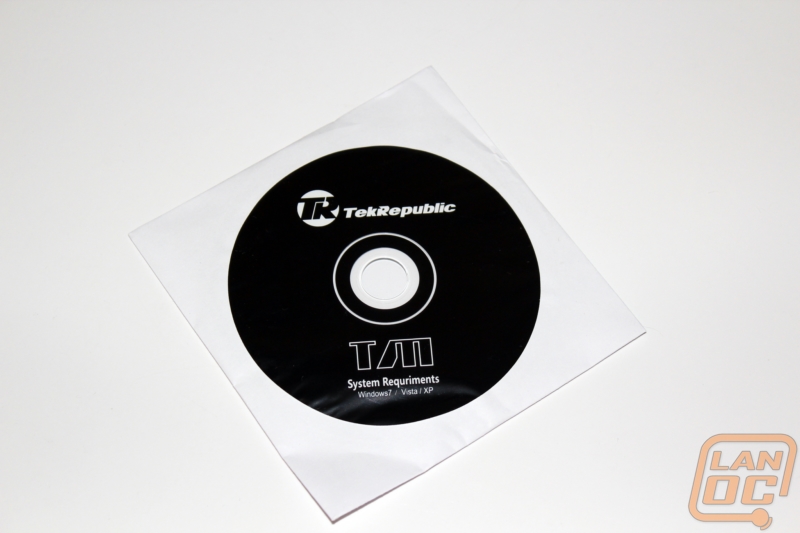 Using ether the included CD or the available zip file on Tek Republic’s website you can install the software needed to adjust the settings of the TM. The software is simple in design requiring only one page to pack everything in. You have a photo of the mouse itself with labels pointing to each of the eight (including scroll up and down) programmable features. I first took a look at the DPI adjustability. The TM allows you to set up to five different DPI’s to flip though, although if that’s too much you can unselect as many as is required. DPI adjustability itself can be done on both X and Y axis and down to as low as 100 and as high as 3600. The DPI options aren’t unlimited though; there are only 8 different settings that you can select from, if you have a very specific DPI that you like to run you might not be able to set the TM to it. 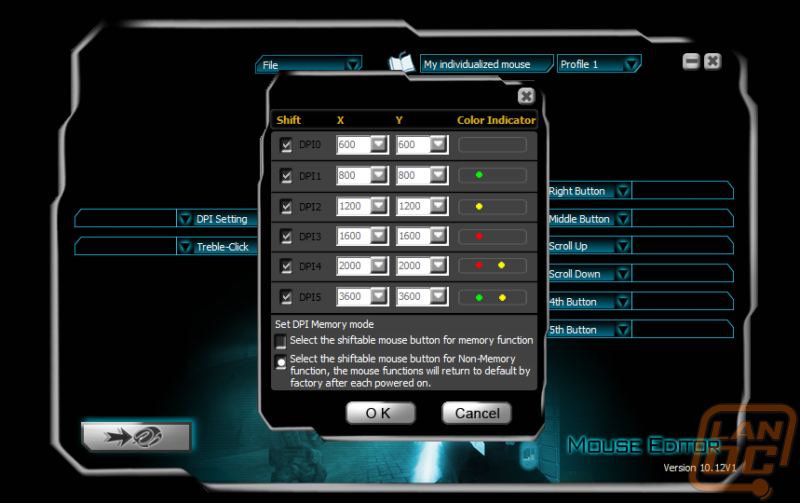 All of the other buttons have a list of different functionality that they can beset to including gestures, multimedia functions, key combinations, and even macro files. They included a nice pack of macros that give you functionality in counter strike and even one for WoW. If none of those float your boat you do have the ability to create your own. 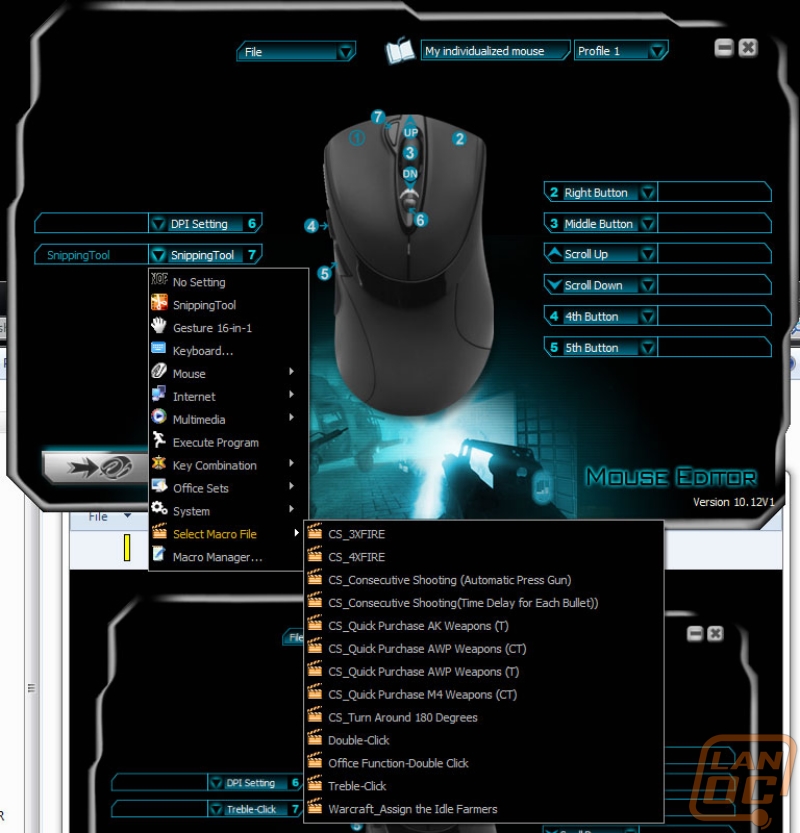 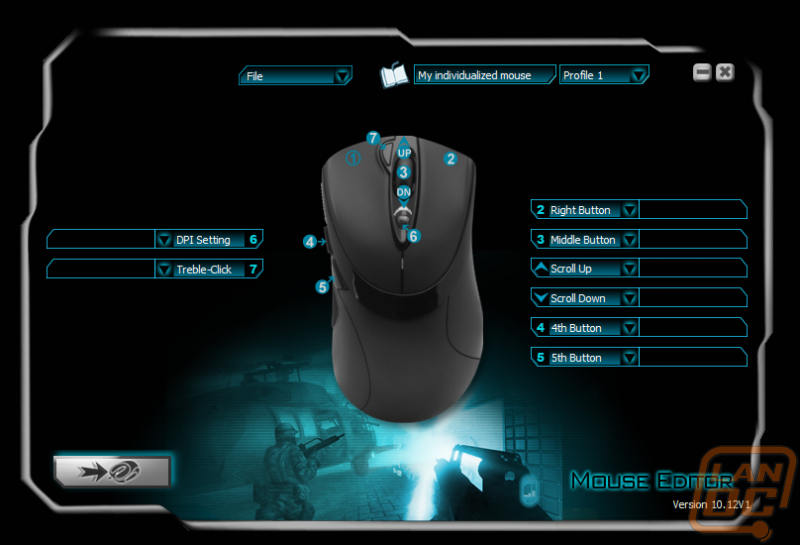 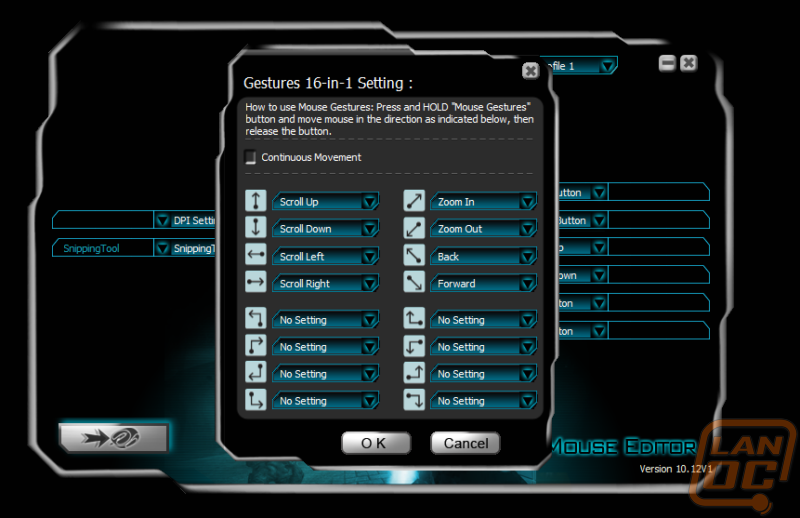 The one option that caught my eye the most was the Snipping tool and is only an option on the 7th button (the one next to the scroll wheel). One of my most used programs in windows is the snip tool included with windows itself, because of this I was excited to see that they included something similar. As it turns out it doesn’t work with the windows program, but is its own program all together. And it worked amazingly. Click and drag and you have now snipped what you need without having to even open a program up at all. From there you can draw or type anything needed onto the snip and save the file. It may not be a gaming feature, but that was by far the best part of the software for me. 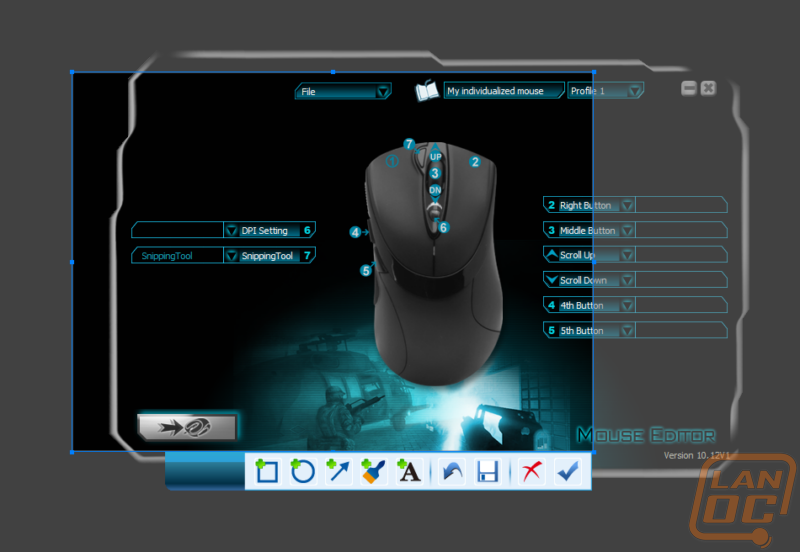 Holding a mouse for extended gaming session or even just browsing means you are going to spend more time interacting and holding your mouse than any other part of your PC. Because of that comfort is extremely important. First I should point out that the TM is designed specifically for people who are right handed, if you are left handed you might as well move on as the TM will not work for you. The design is similar in shape and size to the Razer Deathadder meaning it’s a fairly large “palm” style mouse. You have a total of 6 buttons and a scroll wheel. Two of those buttons are located on the left side of the mouse and the other four are on the top. You have your standard left and right mouse click and then tucked in just to the left front of the scroll wheel you have your third button. The last button is behind the scroll wheel and this is the only button that is clear with an LED backlight. 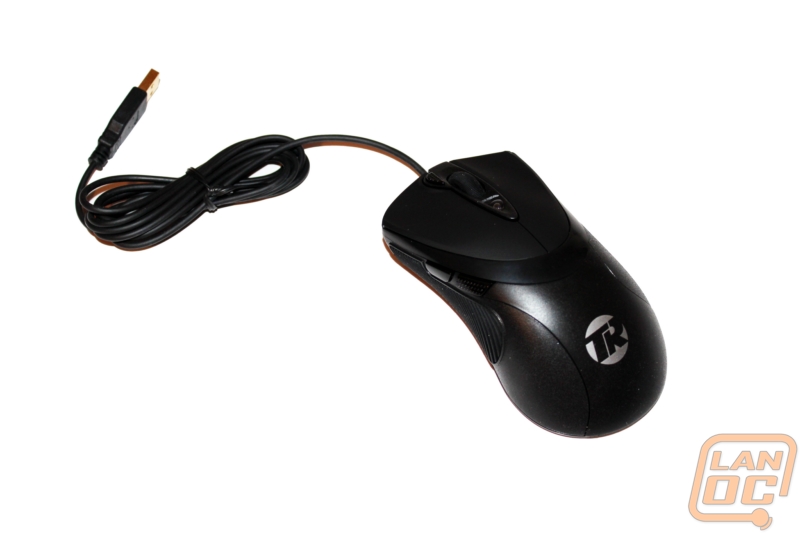 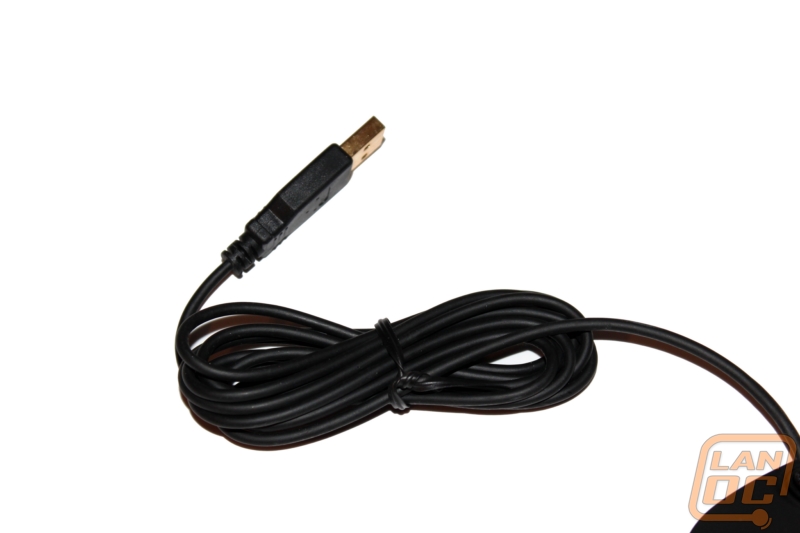 The scroll wheel is covered in rubbed with small groves in it for traction. Speaking of rubber with groves cut into it, there is a large area on the left side where you place your thumb that has a rubber coating with groves cut into it. The overall design is an OEM design meaning you could see this same mouse from other manufactures, but we can’t really fault Tek Republic too much for that considering what it costs to develop and manufacture a new product from scratch. I do hope as they grow that we do see original designs from them. 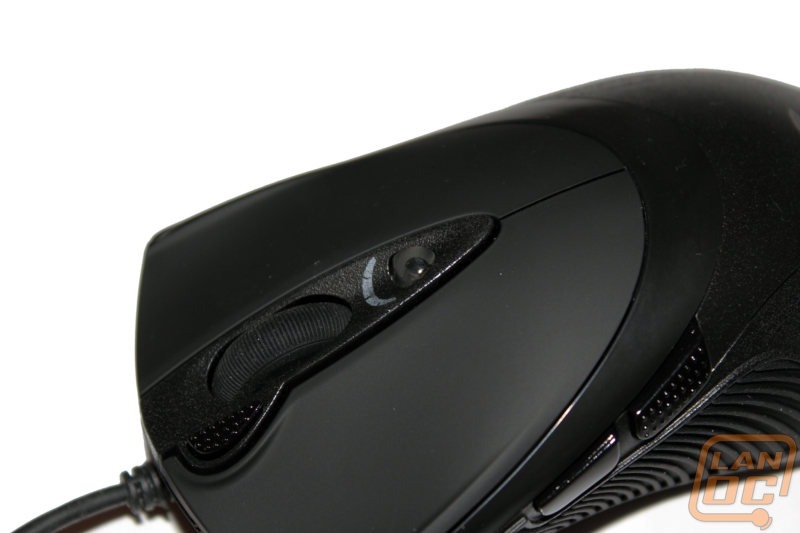 Part of comfort can be the weight of a mouse. Although I prefer mine to be as light as possible, other people prefer to have heft to their mouse. Because of that the bottom of the mouse has a hatch that twists off and hides a pack of weights. There aren’t any marking indicating the weight of each weight, but they look similar to the typical 5 gram weights we have seen in the past. 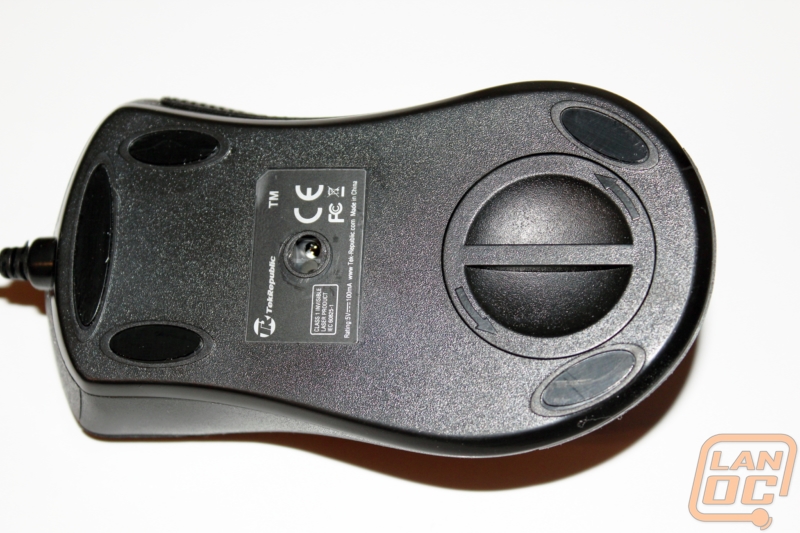 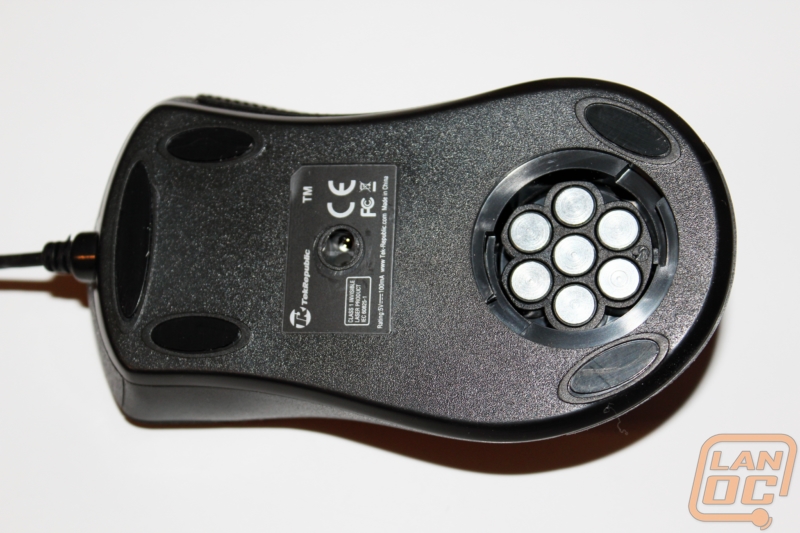 When you combine all of those different attributes, that’s where the overall comfort comes into play. The shape of the mouse is actually really comfortable while still allowing you to pick the mouse up while gaming for those who like me lift. But there are two problems I have with the TM that effect the overall comfort in the end. A good portion of the TM including the entire area that you sit your palm on is made of a hard plastic with a texture to it. When you combine these two the entire mouse has a slightly uncomfortable feel to it that can only be described as almost a sand paper feeling. I know the texture is there to help with grip, but it seems like a rubber finish or something similar would be a better choice. 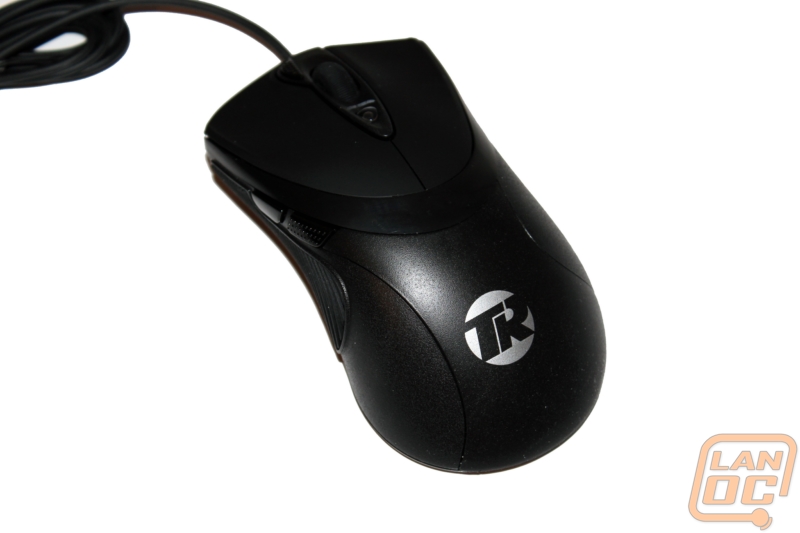 The second problem I have is with the rubber grip on the left side of the mouse. The idea of the rubber grip is logical, but in practice I also found it uncomfortable. Even more surprising was that the rubber grip actually caused me to have less grip. The grip managed to allow my thumb to sweat, something that I didn’t even know was possible. Most likely, it’s releasing oils from my fingertips making it slicker, but it’s something I have never had a problem with other mice. 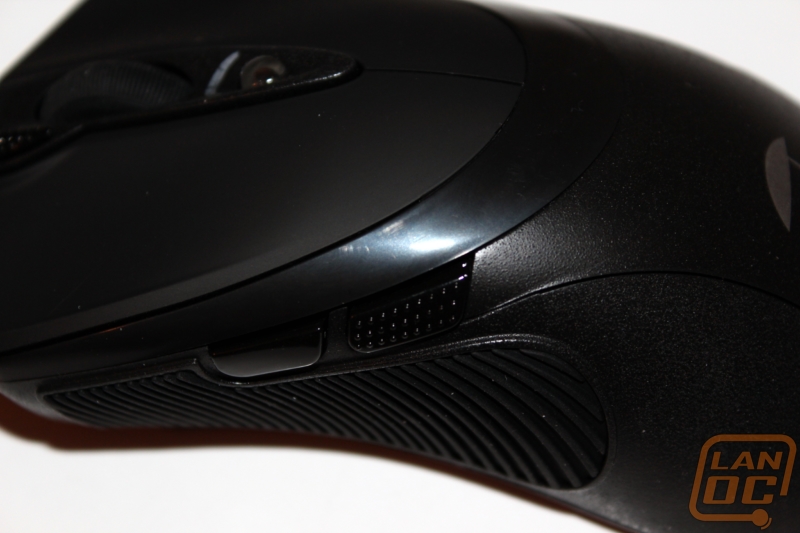 Other than comfort, a mouse’s performance is also very important. To put the TM to the test I put it to use in our Photoshop, gaming, and every day use testing. What does that mean? In Photoshop I spent time outlining and working on details. A mouse with any twitching or accuracy issues wouldn’t be able to do this without problems. Gaming testing includes real work game performance along with testing for z axis tracking issues. And last but not least every day testing is when we use the mouse for everyday tasks like writing this review and browsing the internet. All of our testing we try on multiple surfaces to see if there are any tracking issues that arise with different mouse pads or tables.

So how did the TM perform? Surprisingly well actually, even though they went with a Laser sensor we didn’t experience any of the issues we have experienced with laser mice. Tracking was spot on no matter the surface, including our white tables that typically cause problems. In game performance was the same including our z axis testing, no issues with that at all. While gaming I did find the two thumb buttons way too low to use naturally. I had to go out of the way to reach them. Surprisingly this was actually a nice feature when doing our day to day testing as I sometimes have a problem with accidently bumping thumb buttons when working. Unfortunately this is a gaming mouse so I would prefer that it work better in game than in everyday use. For everyday use I found the snip button to be extremely helpful and normal use to be up to standards. That same button used for the snipping tool was also useful in game as a perfect way to reload quickly. 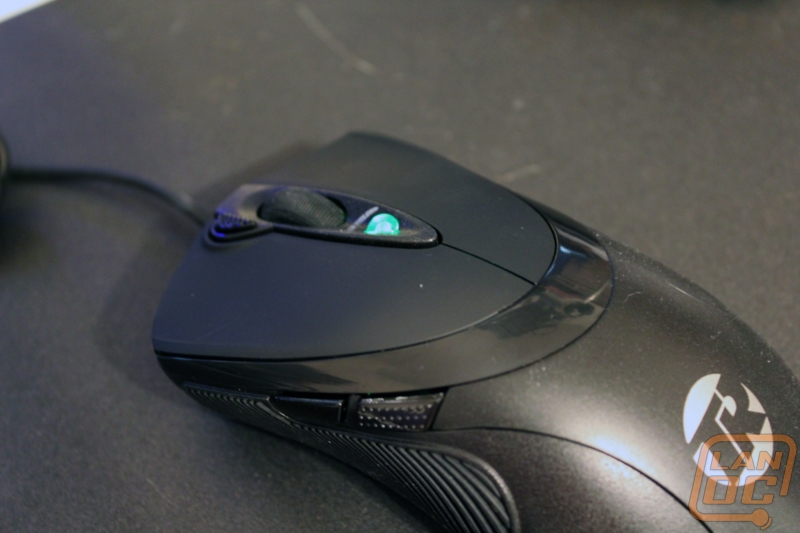 Last but not least on overall performance is how smoothly the mouse slides. The bottom of the mouse has five gliders placed around to make sliding easy. My only complaint with the gliders is the raised portion around them. Although I didn’t experience problem with them I feel that the raised area’s height doesn’t give much room for the glider to wear down before rubbing on the mouse pad. Thankfully they include a bunch of extras for this exact reason. 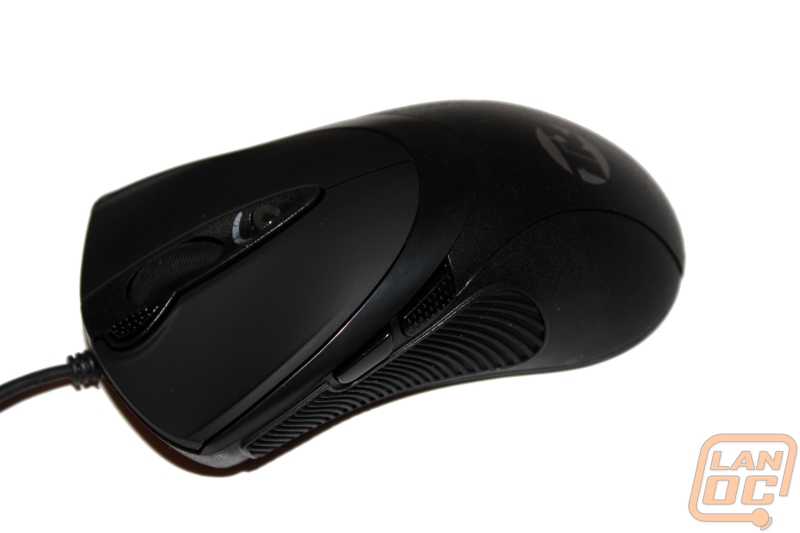 As I said before its fairly rare that we get a chance to talk a look at a mouse that isn’t from the usual suspects. After spending time with the Tek Republic TM Gaming Mouse I can say for sure that its different than what we would see typically. The comfort issues I experienced would most likely prevent me from using this every day. But the hard shell that I complained about does have one benefit. This mouse feels like you could throw it and not worry about damaging it. I would have no problem at all giving this to a child as their first gaming mouse or using it as a loaner at a LAN party. With a retail price of just under $50 I think it’s a little too expensive for what you get, but I think it’s possible that we will see this one at a much more reasonable price in the future.

With no issues with z axis tracking and fairly customizable software it’s still a good performing mouse. I think considering the pro’s and con’s this mouse might be best used in a LAN shop or somewhere else where you might be concerned with the mouse being abused. 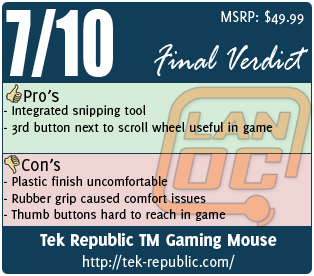 You might call him obsessed or just a hardcore geek. Wes's obsession with gaming hardware and gadgets isn't anything new, he could be found taking things apart even as a child. When not poking around in PC's he can be found playing League of Legends, Awesomenauts, or Civilization 5 or watching a wide variety of TV shows and Movies. A car guy at heart, the same things that draw him into tweaking cars apply when building good looking fast computers. If you are interested in writing for Wes here at LanOC you can reach out to him directly using our contact form.
Discuss this article
Log in to comment
Posts in discussion: Tek Republic TM Gaming Mouse

We have 1337 guests and no members online