Considering the Xai is what I would consider the golden standard the Sensei has a big set of shoes to fit in. Let’s break down the differences between the two mice: 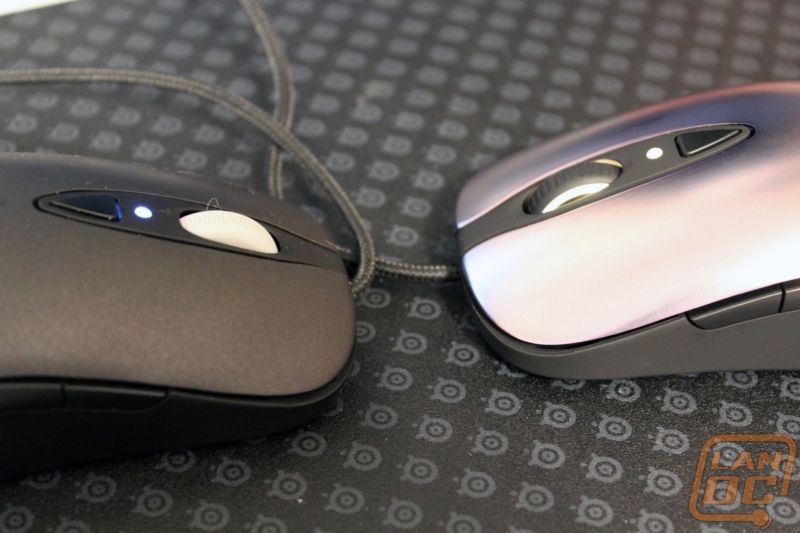 The most obvious difference is the finish on the top of the mouse. The Sensei has a metallic finish that is very different than the Xai’s black grippy finish. The smooth finish on the Sensei is good looking but very slick. It’s a good thing that the finish doesn’t carry down to the side of the mouse where you grip. But if you don’t hold onto the mouse from the sides you may have trouble with it slipping around on you. 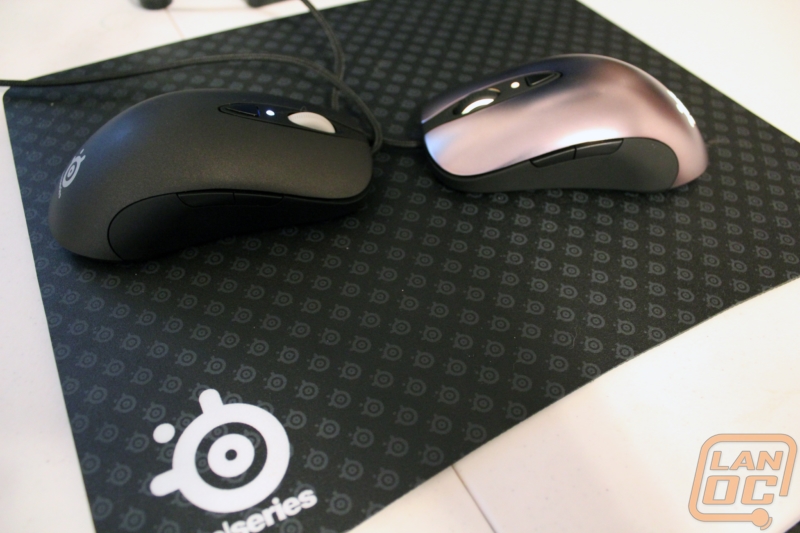 Once you glance over the metallic finish you can see that the overall shape of both of the mice is exactly the same. This is wonderful to hear, the Xai’s shape is simple but it still manages to fit every grip style perfectly. 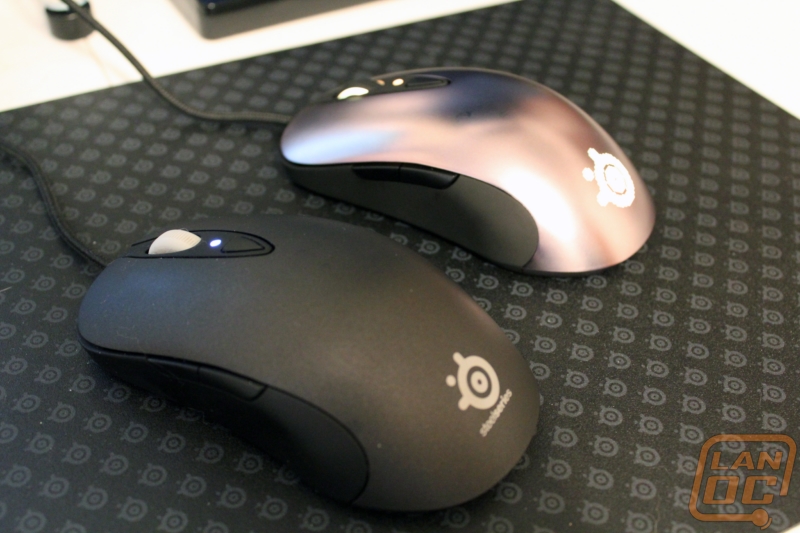 The shape isn’t the only thing that is the same between the two mice. On the bottom the Teflon pads are the same shape and you will also notice that the both have an LCD screen on the bottom. That screen looks brighter on the Sensei, but that could easily be a setting in the software causing the difference. 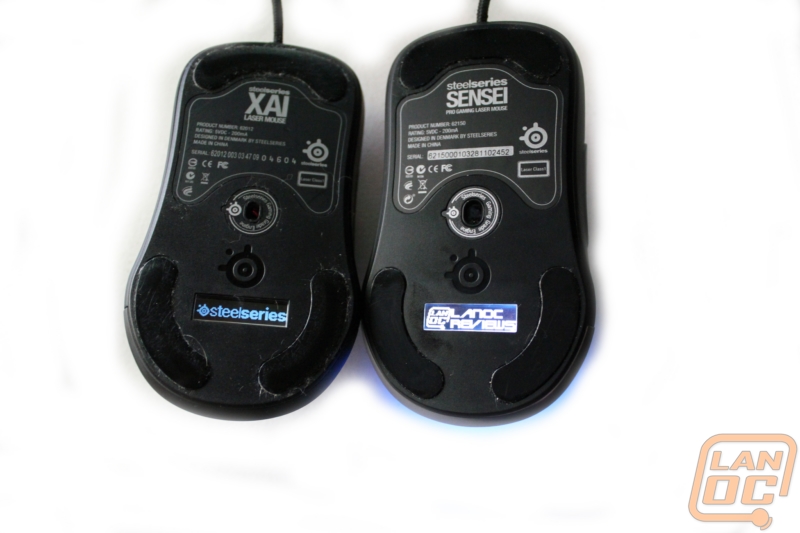 Both the Xai and Sensei share the same braided cord. At six and a half feet it is more than long enough to reach your PC, even if you place it away from your desk. At the end of the cord there is a nice gold plated USB 2.0 port. 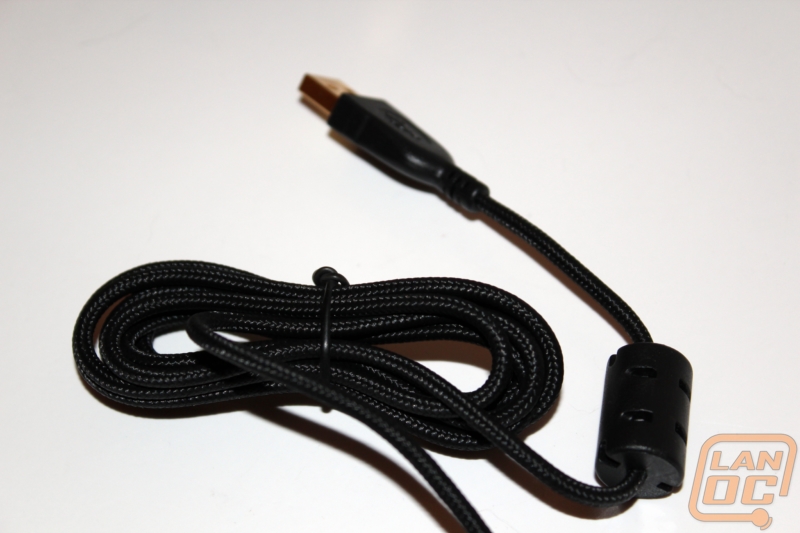 Not only is the Sensei’s scroll wheel lit up on both sides, but they also changed the design from the Xai. The wheel feels wider on your finger, but is actually the same width as the Xai’s. The difference is in the shape itself, the Xai’s wheel was slightly rounded. For the Sensei SteelSeries went with a flatter top giving a wider grip without changing the overall width. Along with those changes the groves cut into the scroll wheel are spaced out more and wider. 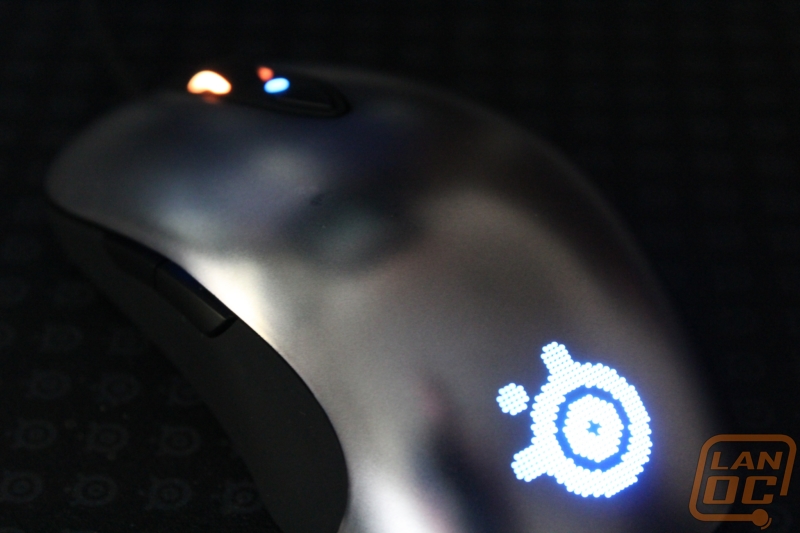 They both have two programmable buttons on both the left and right side for both left- and right-handed gamers. There is a slight difference on how far the buttons stick out on the Sensei compared to the Xai. The Xai has the buttons flush and on the Sensei they stick out slightly. 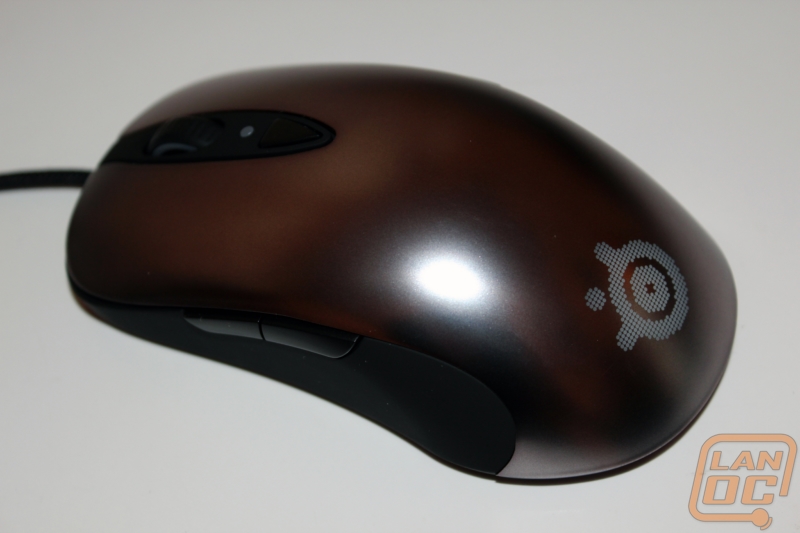 Both mice use the Avago 9500 sensor; it’s always exciting not to see the ever popular Phillips Twin Eye sensor being used on a gaming mouse. They did make a few changes though. For one if you are looking for more speed they have a doubling mode that takes advantage of that powerful 32bit ARM processor built into the Sensei. It doubles your CPI giving you the potential to run up to 11,400 CPI. This is crazy to me, and I run mine between 1200 and 1500 CPI, but someone with multiple monitors may be interested. They also changed the opening for the eye on the bottom of the mouse slightly. The Sensei has a slightly larger opening. This may help the sensor get a better image, or prevent debris from causing issues while gaming. 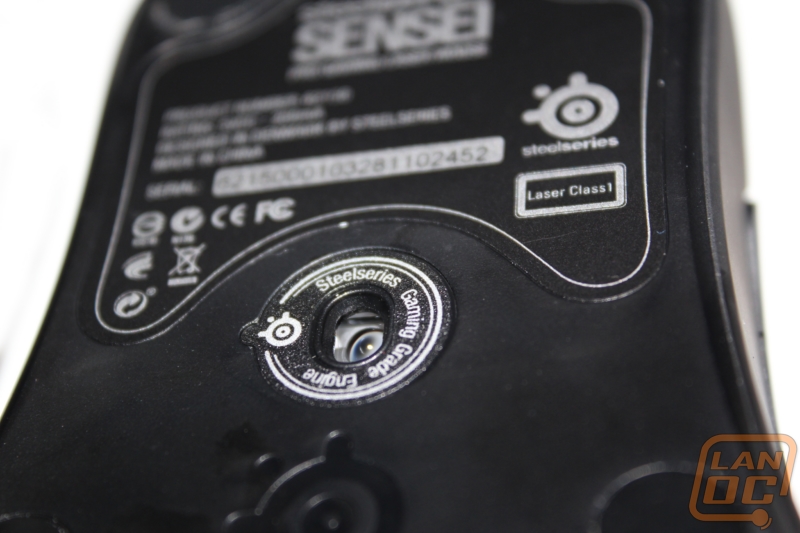 Last but not least one of the changes between the two mice is the inclusion of lighting. SteelSeries put backlighting behind their logo under your palm and on both sides of the scroll wheel. This is nothing new from a gaming mouse but this is a drastic change of philosophy from SteelSeries. 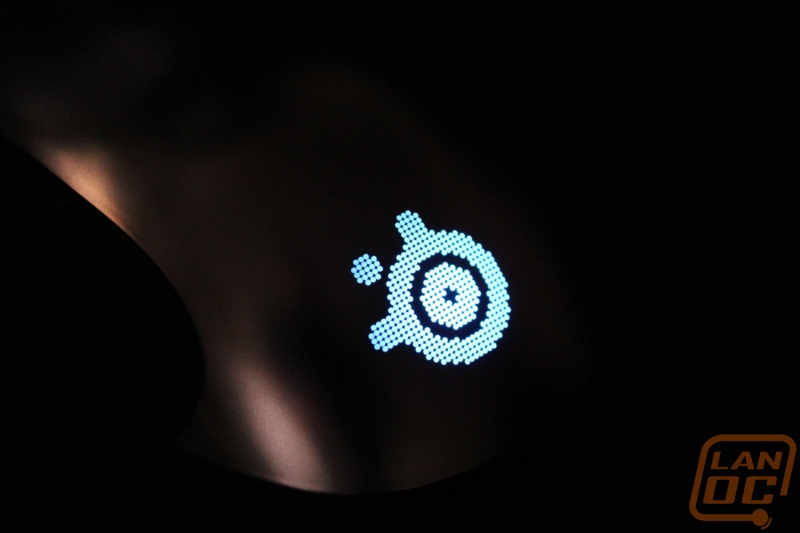 Arxon replied the topic: #19737 11 Sep 2011 10:04
Yeah understandable. Do you guys have the light stuff with the reflective umbrellas?(don't know what they are called)

garfi3ld replied the topic: #19739 11 Sep 2011 10:18
no our lighting is typically rudimentary at best. I am hoping to get better lighting after the new year. The cost of CES puts a major damper on things and picking up the new camera was a big hit also.

So what do you guys think of the Sensei? This is one of only I think two reviews published on the mouse right now worldwide (atleast that we can find).

khanov replied the topic: #19799 14 Sep 2011 12:30
Thanks for the review, good read.
I'm curious about one thing that you left out, did you try the "Exactaim" and "ExactAccel" ?
These seem to be Steelseries name for on-the-fly adjustment of acceleration. I know most gamers would just turn that **** off, but I was wondering if you played with it at all (and if so what are your impressions) ?

garfi3ld replied the topic: #19800 14 Sep 2011 14:46
I did try out the Exactaim and Exactaccel. Having come from the Xai I already knew what I preferred. I crank up the Exactaim to cut out the "jitter" or shakyness that a laser mouse sometimes gets on a poor quality surface. It also does a good job of keeping your aim steady in game if you get slightly shaky.

Exactaccel is a 1 - 10 setting for in mouse acceleration. I am like most other gamers who prefer no acceleration on my mouse. With it turned up to its highest setting of 10, responsiveness is considerably higher. Depending on how quickly you move your mouse moving a few inches can move the curser all the way across the screen or only a few inches. If you can get used to it, accel can be great for a sniper who needs detailed movement when aiming but the ability to turn around quickly if needed.

Wingless92 replied the topic: #20353 11 Oct 2011 01:36
They are sold out right now on Amazon. I am holding off until they are back in stock. I really don't want to mess around with returning it if I don't like it with another website.

Wingless92 replied the topic: #20512 23 Oct 2011 23:29
Picked mine up on Amazon. So far i'm liking it but I am still getting used to it. Much better than the Razer mouse that I had awhile back. Liking that I can change the colors to match my keyboard.
Read More...

We have 1683 guests and one member online