Performance
Cory has been using the Logitech G13 keypad since the first time I met him, in a match of Call of Duty 4. I can count on one hand the number of times I've seen him game without it, and none of them was by his choice. The following are his thoughts after replacing his G13 with the Nostromo: 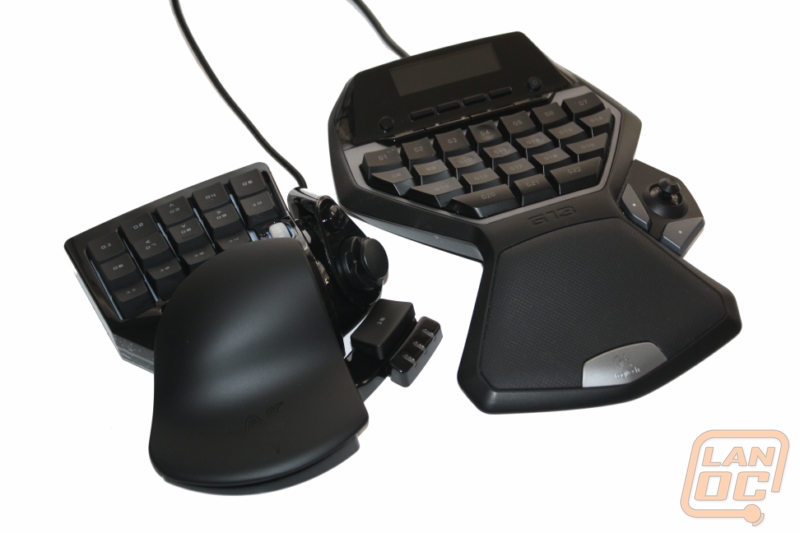 "With the palm rest being at such an angle, it should have some type of no slip grip. I find myself slipping off and constantly re-adjusting. Up to 8 key maps  per configuration is nice, however there is a slight delay when switching between them, which is quite aggravating considering during intense play you'd prefer to be in and out of a key map in under a second.

Even though I feel it could be quicker it's still great to have well over 120 key configs/macros. I was trying to use multiple key maps ( 4 to be exact ) and it took a while, but the LED's indicating what key map you're on gets easy. Although to be fair I don't feel like I can fully utilize more than 2 key maps.

It took me an eternity to figure out that in order to rebind the directional pad to WASD you have to simply disable the diagonals and the software will make up for walking in a diagonal direction. I was trying to macro the key presses W+A W+D S+A and S+D and no macro configuration was working correctly. I then gave up and disabled them, then realized I spend 20 min figuring out nothing, but I'm going to fault that with me and not the software.

I thought with the D-pad being at an angle it would take a while to adjust to but it was really just a matter of a few minutes."

I agree, it's difficult to imagine efficiently using that large of a number of key maps, but I'm sure there are those out there who can, and I know they'll appreciate the support. It worked out very well for me in arena strategy games like Defense of the Ancients, where one profile can be created for DoTA in general, and then each key map assigned for different heroes.

I didn't find my hand slipping of the wrist rest as often as Cory did, but the piece is made of a smoother finish and could easily feature more of an anti-slip material. Right now the Nostromo is comfortable to use, and I wouldn't want that to be sacrificed however.

I had a little issue with the macro management, but otherwise the software works great. It's easy-to-use and has an attractive GUI. The keys are all easy to reach, it did a little getting used to navigating the keypad without looking, but once I did I didn't want to go back. 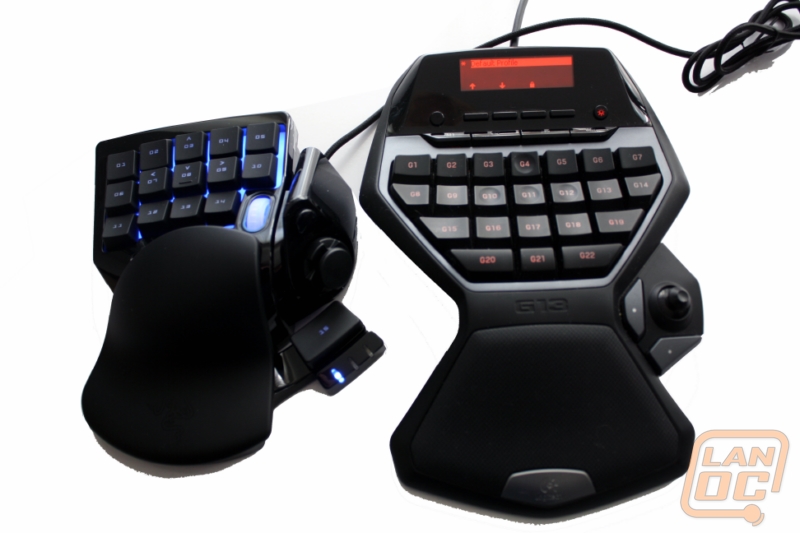 Wingless92 replied the topic: #16464 05 Jul 2011 19:43
Very nice Adam, Cory. I have tried to use these and I just can't, but that's me. I was reading through it just to hear what Cory thought of it. I know he's in love with the G13. Agreed, the screen on the 13 does seem a bit outta place. Do you really need the screen on that thing? The keyboards, you betcha. I use mine all the time. It's great for checking temps in game or seeing what your RAM usage is.

I like the design overall. It certainly looks better than the G13 and it looks way more comfortable.

So Cory, would you still use the G13 or this everyday?

Wingless92 wrote: So Cory, would you still use the G13 or this everyday?

I'm a Logitech G13 user, and am also curious about this.

garfi3ld wrote: cory would prefer the g13 and adam the Nostromo. Cory uses all of the g13's keys something the Nostromo can't match

Very cool. I use all of the keys on my G13, too, for most profiles. I never thought I actually would, when I first bought it, though.

Kayden replied the topic: #18601 21 Aug 2011 05:07
I bought the N52te aka Razer Nostromo back when Belkin was in charge of it in 2007, the main reason I got it was because I had the N52 and loved it, but that love was not shared with the N52te. The biggest problem was the firmware and software support from Belkin, they just sucked big harry donkey balls. The analog stick didn't work in some games, the keys would be slow to respond in some games and personally my wrist hurt. When I saw Logitech's offering with the G13 I quickly jumped ship and haven't looked back at it since 2008.

It seems like not much has changed but the name, the UI and fixing some of the problems still plaguing it a year after release. I haven't tried in 3 years and I might give it another chance, but the G13 display is very convenient since I use LCD SirReal Panel to watch my temps and other system information, but most importantly it doesn't hurt my wrist. This is because I have long fingers and with the N52te they would hang over or them, but the G13 my palm can rest flat and does not hurt my wrist, along with my fingers not hanging over or feeling sore.

In all physically the N52te was fine, it would only become problematic after a long period of use, but the software and firmware lack of support just killed it for me. I gave it a 3 out of 10 when I used it, perhaps that will change or it wont, but one thing is for sure I wont move away from my G13 anytime soon.
Read More...