Software
The main window that launches with the Challenger Pro software is the central hub for customizing the keyboard. Users don't have to worry about diving deep into multiple windows for each category such as assigning macros or lighting, as they can all be accessed from this screen. The only time an additional window is launched is when profiles are being loaded/saved and for actual macro recording. This arrangement is much less intimidating to novice users, but may not give enthusiasts the level of customization they're looking for. 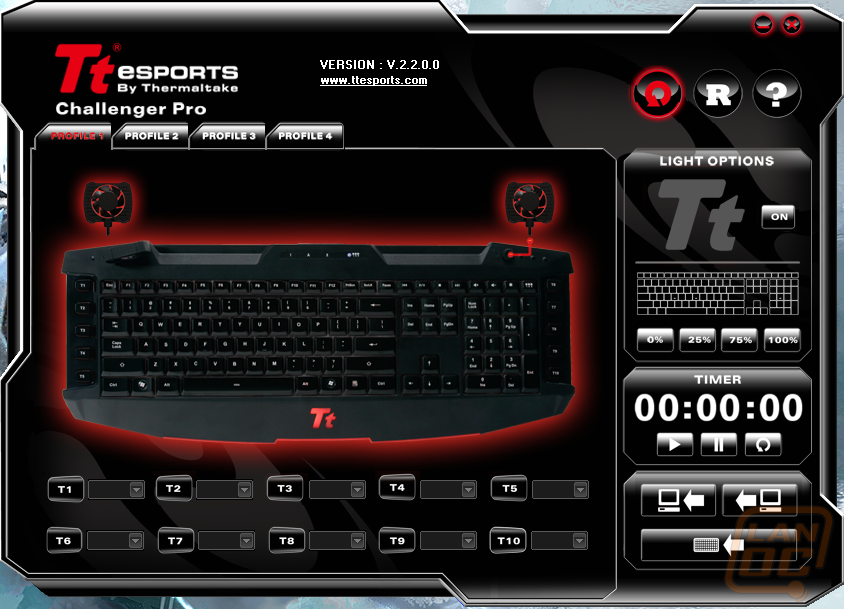 The tabs at the top cycle through four different profiles, which will change the action assigned to the T1 through T10 buttons. At the top of the board accompanying the scroll/num/caps lock indicator is an LED light that switches color to indicate which profile is selected, with a key on the board positioned above the num pad for on-the-fly switching. The light cycles from red to green to blue to purple, which is an odd way to differentiate profiles, since it breaks an otherwise consistent color scheme.

Macros are strung together using recording, with no option to drag and drop actions, a popular feature we've seen many times with other software. This software also offers no direct editing of the recording other than deleting and inserting time delays, so if you made a mistake, you'll have to record it again until you get it right. Thermaltake has also included no sort of built-in macro bank, meaning the macros you record are only saved temporarily on the button you recorded them to, unless you save them to a directory on your hard drive. 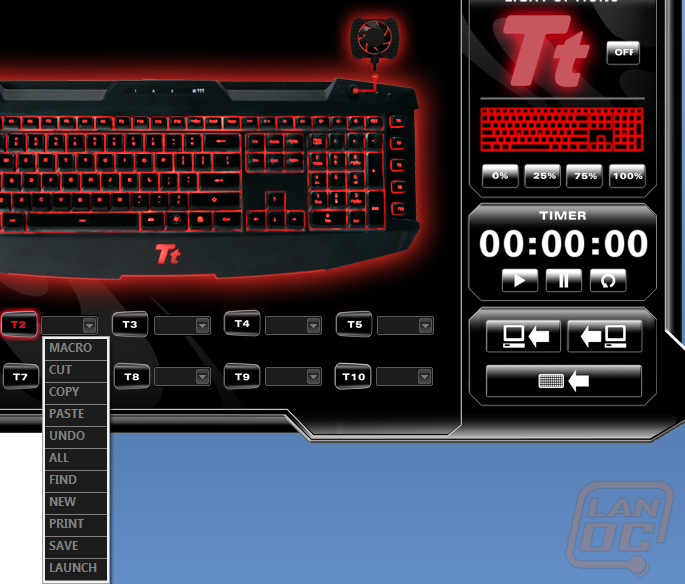 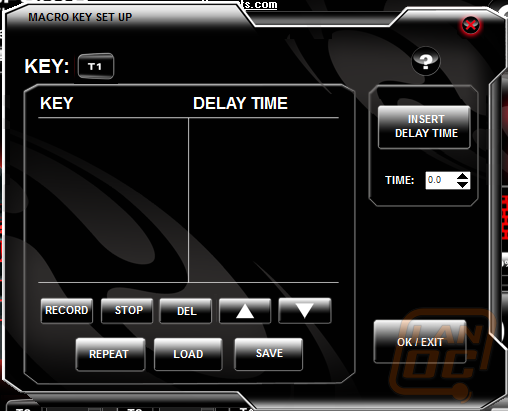 Lastly, the software does provide a timer on the main screen that solely keeps track of time. It doesn't record keystrokes or actions. It simply will let you know how long you spent doing an activity. On somewhat of the same topic, launching the software requires it to load, not an uncommon task but in this case, it takes extremely long. Using a timer of my own, it took almost a minute and a half to load the software for custimization. That may not sound like a long time, but relatively its much, much longer than I've ever had to wait with any suite. Once it's loaded, it will continue to run in the task bar, so you'll be okay as long as you don't end the process manually, or restart your computer.

garfi3ld replied the topic: #16373 30 Jun 2011 01:20
Thanks for the feedback we should be able to get that photo and add it to the review. The only problem with a dark shot is it really doesn't show what the keyboard will look like in person. Normally it will come out over saturated and will make even the dimmest back lighting look bright.

I do like this though. I just think the price is a tad high.

Arxon wrote: picture of it glowing in a dark room would have been nice.

Yes usually photos without flash don't do the product justice, and flash of course defeats the purpose. I'll try to snap one for you though, it does have a nice underglow to it.

Thanks! It can be somewhat difficult since keyboards especially are typically very similar in nature. Brand preference comes in to play I'm sure, and the mechanics of the keys are a big thing as well.
Read More...

We have 1488 guests and one member online