Alright, it's time to come clean.  You can't deny harboring some inner desire to fly.  Unfortunately for humans as a species, we have all the the aerodynamics of a rock covered in silly string.  We are resilient, however, determined if you will, to dominate the skies.  Thus we fashioned great metal birds in order to pioneer yet another glorious frontier.  This innate desire to fly, and by proxy, pilot aircraft has translated into our entertainment with the Flight Simulator franchise and games like Tom Clancy's HawX.  Of course, on terms of reality, navigating a plane with any stock system controller is bunk.  Real cockpits are a literal slew of devices and mechanism all used to prevent the craft from going nose down.  So for a more interesting and realistic flight experience,  manufacturers have been developing special controllers for quite some time, in an effort to simulate as true of a flight experience as best as possible.  Thrustmaster, ever adept as they are at creating desirable peripherals, have a few such products and were kind enough to send us their T.Flight Hotas X to take for a spin.

Review Pics by:  Wes and Tomikaze

# Programmable: the 12 buttons and 5 axles are entirely programmable.

# Unique: Plug & Play for ultra-simple and fast installation with all functions pre-configured for immediate takeoff (without worrying about configuration)

# Exclusive "MAPPING" button: all functions may be instantly switched around between each other

# Internal memory: to save all of your programming, even with the joystick disconnected

# Weighted base for greater stability

# Exclusive "PRESET" button": to switch, while playing, instantly from one programme to another 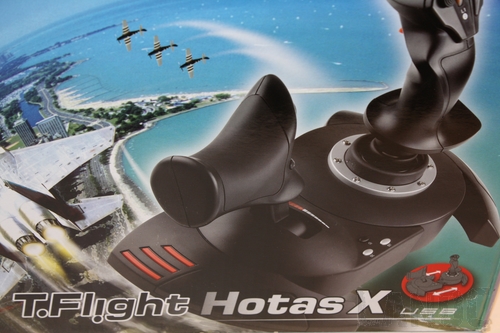 A fanciful aerial scene adorns the entirety of the box, with a picture of the Hotas X superimposed on the front.  It certainly is an exciting box, to be sure. I'm not absolutely clear on this, but I'm pretty sure that the scene in question is from HawX itself.  On the sides are very will illustrated examples of how the Hotas X works and the back is relegated to the 5 language warning we've all become so familiar with. 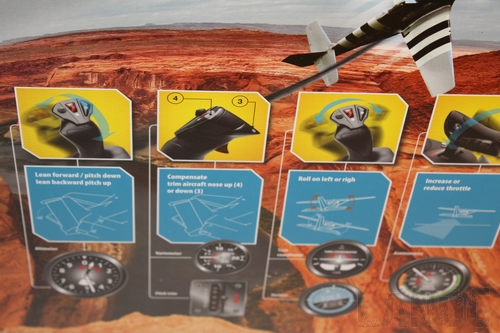 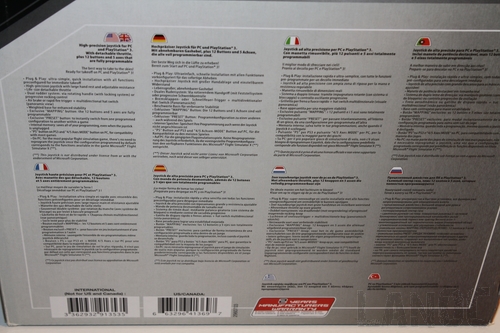 Inside, solid foam sturdily protects the Hotas, along with a manual for those who need it. 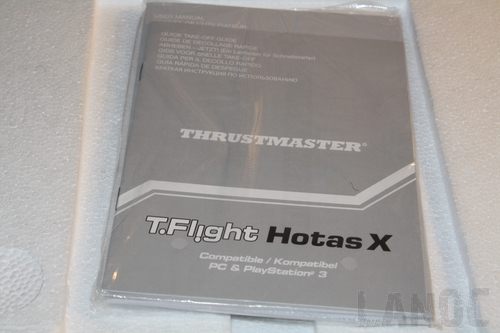 First and foremost, the game I used to put the Hotas through its paces was HawX for PC.  As you can see from the specs, Thrustmaster ensures full functionality with HawX as well as Flight Simulator X for those married to realism.  In order to achieve PC functionality you merely have to flip a switch on the side to PC and attach the USB cable. 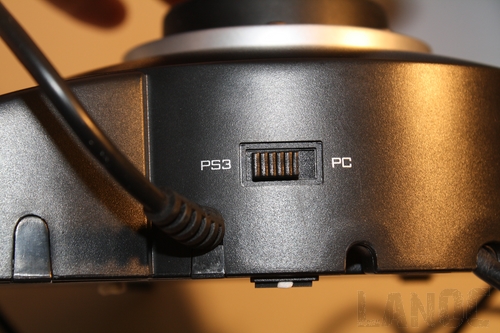 The whole mechanism is powered on by pressing the Home button, much like a PS3 controller.   Not that this is a coincidence, of course.  The Hotas X is designed to work 100% on the PS3 as well.  An interesting feature is that due to the Hotas' dual functionality, it has to have all the buttons a PS3 controller would have.  This means that this little number has quite an impressive number of buttons, all ripe for the remapping.  But why would you do a thing like that?  Thrustmaster was already kind enough to equip the Hotas X with presets for HawX and Flight Simulator X.  I'm not an easy person to impress, but to be able to hook up a peripheral as such and not need to alter any controls, well lets just call it a fuzzy feeling.  This isn't to imply that you can't remap the buttons on the Hotas, quite the opposite in fact.  The "MAPPING" button, lives ups to its name quite admirably, and I found that with half a mind, I could switch my button configurations several times during levels. 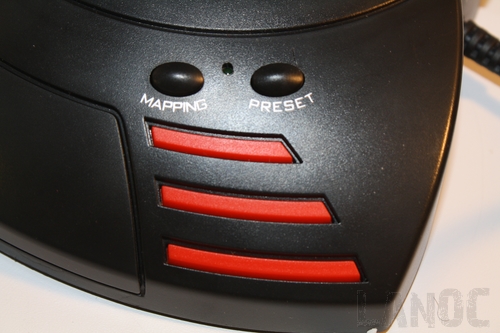 So if you're THAT guy, and have to have an exactly perfect setup to play your games well, then here is your match made in heaven.  One thing you will run into when setting up this beast however, is the massive amount of cabling you are forced to come to terms with.  In a moment of pure genius, Thrustmaster decided that users should be able to separate the joystick and the throttle at their discretion. 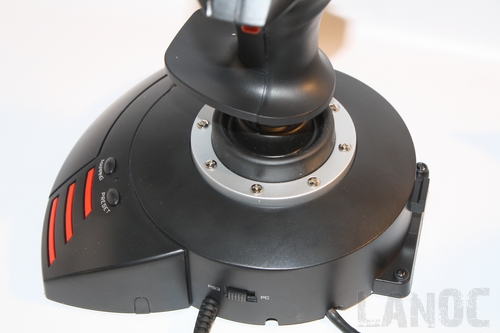 While a good idea, it leaves you about three feet of cable to manage between the two devices.  What is worse is that if you decide you want to leave the stick and throttle together, you have to route all this cable through a labyrinthian maze that Thrustmaster conveniently provided underneath.  Also let me take this time to point out that while you can separate the two you can't actually remove one or the other from the equation totally, so understand that for this peripheral, its a package deal. 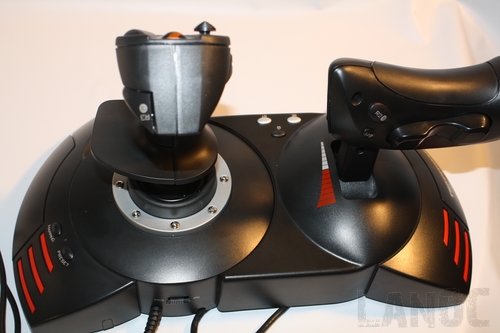 In another feat of ingenuity, Thrustmaster included a joystick resistance dial on the bottom.  This allows you to manually determine how much you have to move the stick to achieve your desired in-game results.  That said, the actual controls are butter.  At no point did the stick or throttle do anything I didn't expect, and response times were marvelous.  The throttle seemed to have five different levels, as opposed to a gradient in the amount of thrust you use.  Reflecting on this however, it may be that HawX itself only animates roughly five different levels.  I was basing my observations mainly on the flaps on the engine, so this is entirely possible. 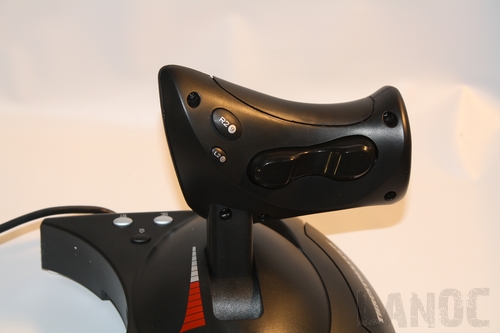 One minor gripe I had was with the buttons on the throttle that face away from the user.  Since you can't see them, it's easy to hit them purely by accident.  I found myself running out of flares in the first five minutes of every mission becuase I kept hitting the button.  This is averted with a little familiarity with the throttle however,  and doesn't lend itself as much of a con.  Cons are hard to come by when you pull an actual trigger to fire a missile at your enemy.  Try as you might, it's difficult to suppress a grin every time.  Another pro of this set is that due to the large number of buttons, a few functions are doubled, allowing you to play in the way you feel comfortable.  For instance, in the specs, Thrustmaster lists the dual-system aerodynamic control as a feature.  What this boils down to is that to control the flaps that make you turn left and right (not bank left and right), you rotate the joystick left or right respectively.  Although this is a very natural feeling way to turn, at times it seems a bit imprecise.  So you have a second, hence dual, option.  The throttle has a lever you rest your fingers on that can be tilted left and right.  This too will control your left and right flaps.  Couple the sheer number of buttons with this kind of idea, and the possibilities are endless.    One more marked feature is a nifty little button on the top left of the joystick.  It's a tiny four directional button that allows for easy menu navigation, kind of like a d-pad. 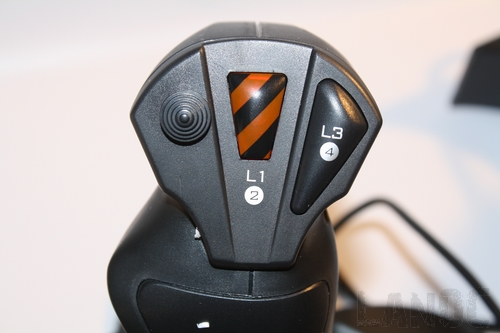 Not a whole lot to point out here, other than the fact that black and red makes for a slick color scheme.  The missile trigger is colored an amusingly cautionary striped yellow and black.  Other triggers and buttons are a flat black, labeled with their numerical and PS3 identities. The exception is the select and start, both of which are silver.  Pleasing to the eye, as well as functional. 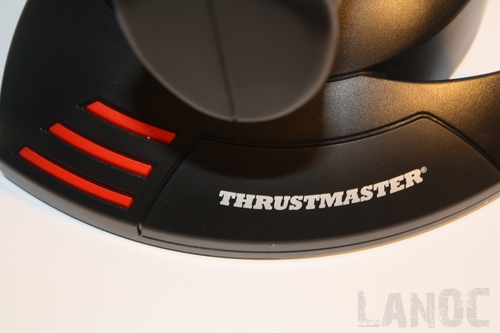 An interesting thing I learned from this product is that Hotas stands for hands on throttle-and-stick.  Alright that isn't true.  Wikipedia taught me that.  What is interesting is that it refers to the control style typically found in modern fighter jets.  This is most evident when looking at Thrustmaster's Hotas Cougar.  It's an impressive all-metal replica of an F-16's control unit.  Impressive to say the least.  Not so impressive at it's list price of $259.99.  However thats where our little buddy Hotas X comes into play.  It provides you with all the function you could want at an entry level price.  In short, if you're in the market for a joystick and throttle, don't hesitate on this one, you won't regret it. 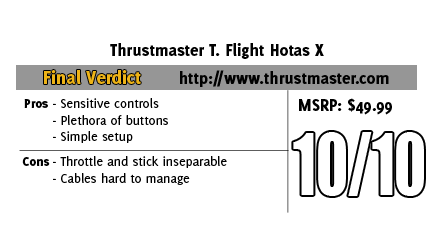 You might call him obsessed or just a hardcore geek. Wes's obsession with gaming hardware and gadgets isn't anything new, he could be found taking things apart even as a child. When not poking around in PC's he can be found playing League of Legends, Awesomenauts, or Civilization 5 or watching a wide variety of TV shows and Movies. A car guy at heart, the same things that draw him into tweaking cars apply when building good looking fast computers. If you are interested in writing for Wes here at LanOC you can reach out to him directly using our contact form.
Discuss this article
Log in to comment
Posts in discussion: Thrustmaster T. Flight Hotas X

We have 865 guests and one member online