As much of a fan of Razer products that I have been I have yet to own one of their keyboards. When they brought out the Tarantula keyboard I seriously considered picking one up. But after testing one out I decided to go with the 2nd generation G15 that I still use. Because of this I was really excited when our friends at Razer asked if we wanted to take a look at their new keyboard (ok so I may have begged a little). Today I am going to tell you my experiences with this new keyboard, will it live up to the hype of all of the other Razer products?

Razer, always the one to showcase their products with amazing packaging didn't skip a beat on packing up the Lycosa Mirror Edition. The outside of the box has the standard flat black that you always see on Razer packaging. The front was fairly simple with a large picture of the keyboard, a short list of features, and a mirror finished Lycosa logo. The back of the box was an open canvas for Razer to tell you everything you need to know about the keyboard. They include a breakdown of features along with pictures to go along with them. They also had room to include technical comparisons to standard keyboards in multiple languages. 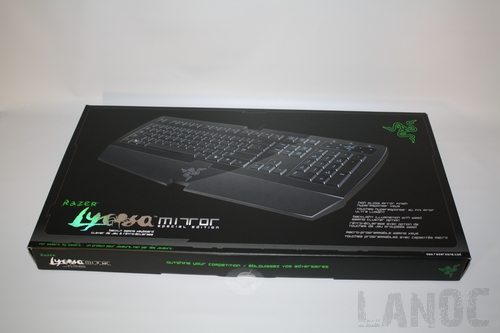 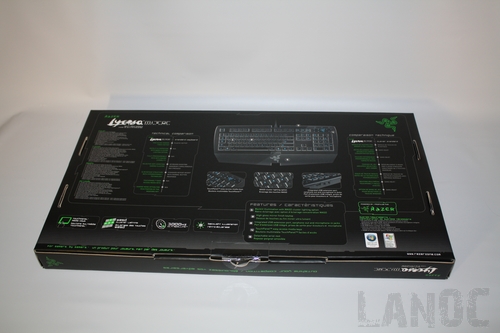 Opening up the box is where I was very impressed. They showcased the pack of instructions and other papers like they were the main attraction. Along side of them there is a Message from "RazerGuy" the CEO of the company. Its this kind of detail that makes Razer stand out! Inside the pouch I found a certificate of authenticity, A Razer product guide, a quick start guide, a microfiber cloth, two Razer stickers, and the Master guide that includes the driver disk. 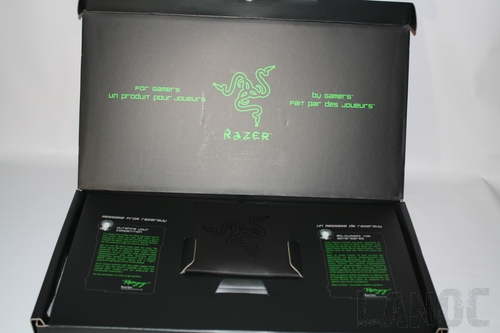 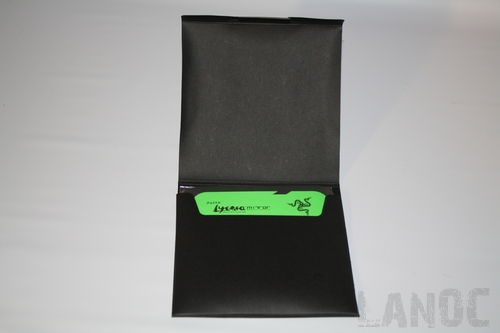 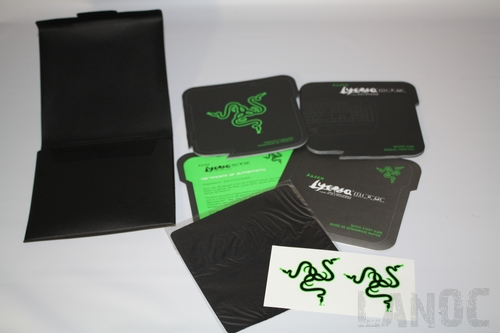 Under the next layer I of course found the keyboard wrapped in foam to keep it protected. Even with all of the showy stuff in the packaging they still managed to keep the keyboard safe and sound, and in this case free from finger prints. 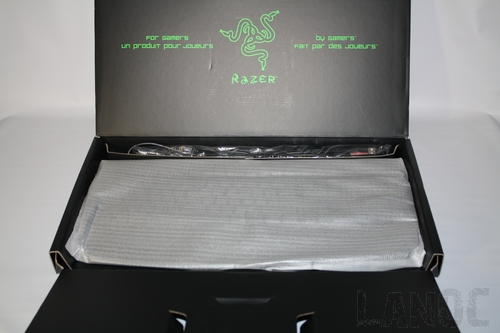 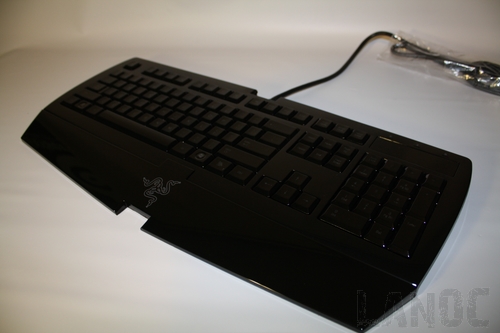 When it comes to gaming peripherals, the hardware is only part of the big picture. With bad or limited software, it can really affect the performance of the hardware, the Silverstone Raven mouse was a great example of that. Razer has always been good about including a lot of features in their software, this time was no exception. The main feature of course is the ability to reprogram EVERY key to do anything you want. You have the ability to record full macros, insert delays, and even open a program. On top of that, you can set the macro for one time only, repeat while pressed, and repeat until next key is pressed. The interface for this is very simple, you just click on the key you would like to program and it opens up the options.  The software does also give you the option to turn the keyboard lights on, off, and to the WASD layout. Overall, the software and features are very impressive; they also have a normal Razer look to them as you can see in the pictures. 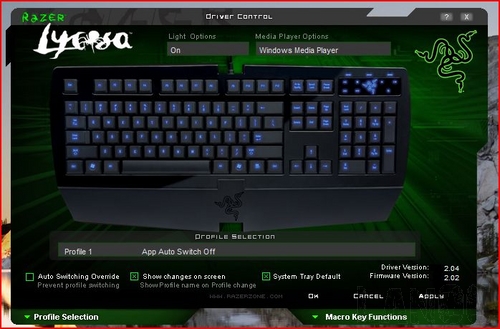 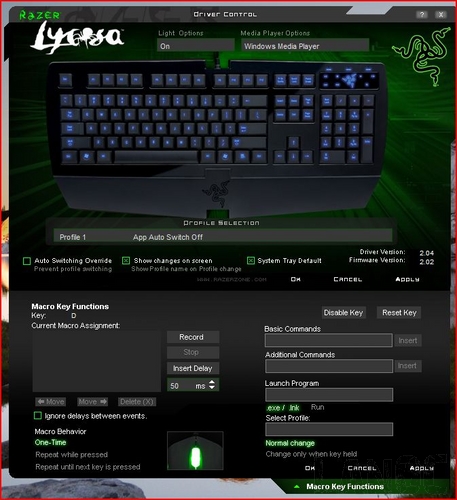 Razer prides themselves on their focus on the gaming crowd; it is what sets them apart from the thousand other peripheral manufactures. Even the most dedicated gamers spend time on their computers other than playing games. Because of that, I'm going to break down my notes by in game and out of game. I did most of my in game testing playing Team Fortress 2, my out of game testing was spent right here writing reviews and posting on the internet. 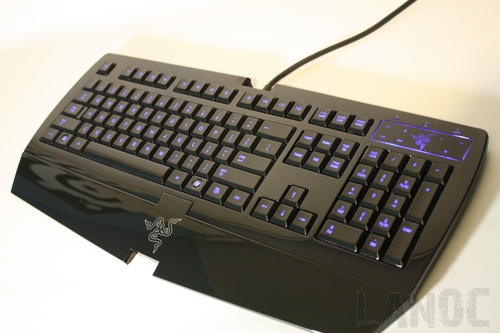 Other than the fully programmable keys the slim keycap structure with " Hyperesponse" is the biggest gaming feature included with the Lycosa. The idea is no matter how low you make the key response you still have a delay from the time it takes to push the key down. Razer basically made the key throw a little shorter without making it too short. I can see the though process and why they focused on it. The question is in game did it help? It's hard to tell if the shorter throw makes a big difference, I did find the keyboard to be very responsive while playing. I didn't find the programmable keys to be useful in my gaming, but I believe that it could be a very useful feature to some people. Personally I found myself missing the extra macro buttons from my G15 along with the on the fly programmability. Having to stop mid game and ALT-TAB out of game to set things up can't be good for your gameplay. The key backlighting makes it easy to see the keys while you are sitting in the dark. 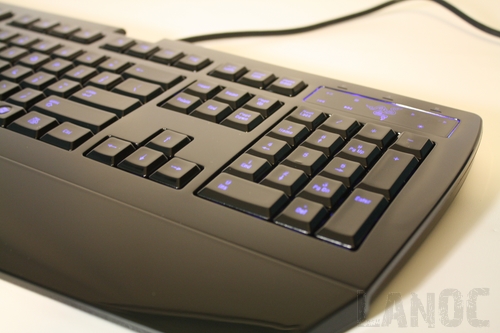 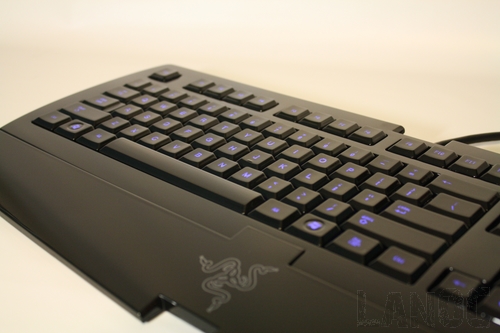 While living with the Lycosa I found the built in headphone and microphone plugs to be very convenient if your case is hard to access. Anytime I am at my pc I am watching some sort of tv show or movie. So for me it is very important to have volume and multimedia controls built into my keyboard. Razer did pack them into the Lycosa and they made them look sexy with the "Touch panel" controls. I was very disappointed to not find a mute button, its odd to have included everything else but to drop the ball on an important button. Considering how much typing I do I found the hyper response keys to be a little shorter throw than I would have liked for everyday use. I'm sure once you get used to it this wouldn't be an issue, but I found myself bottoming out the keys as I typed. I'm sure over time this could be abusive to the keyboard and to my hands. 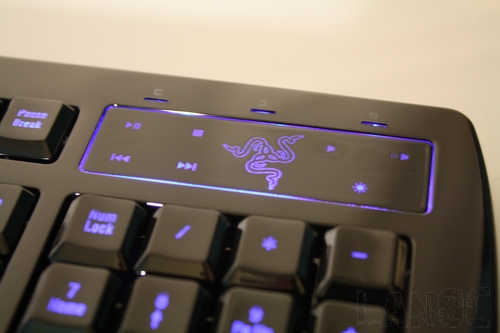 Razer put a lot of time into the Lycosa, it's a major improvement over the Tarantula. The Lycosa looks like a keyboard that Bruce Wayne would be pimping in the batcave. The all black slick style can only be described as sexy. The software covered all of the bases giving you complete control of programming any and all of the keys. Of course, the keyboard performed great in game. I did have a few issues living with the keyboard day to day. I would love to try out the standard version of the Lycosa, losing the mirror finish would make the keyboard much easier to keep free from fingerprints. The missing mute button was the biggest issue I had with the Lycosa, but I'm hoping to find a way to put the fully programmable keys to work somehow to give me one.  Overall the Lycosa is a typical Razer product, amazing style with great gaming performance. If you aren't into built in LCD screens but what a gaming keyboard the Lycosa is defiantly for you. 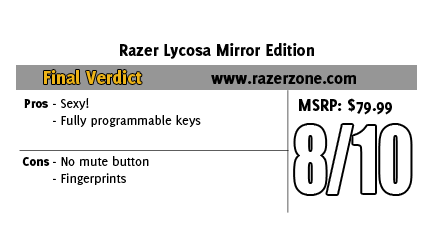 You might call him obsessed or just a hardcore geek. Wes's obsession with gaming hardware and gadgets isn't anything new, he could be found taking things apart even as a child. When not poking around in PC's he can be found playing League of Legends, Awesomenauts, or Civilization 5 or watching a wide variety of TV shows and Movies. A car guy at heart, the same things that draw him into tweaking cars apply when building good looking fast computers. If you are interested in writing for Wes here at LanOC you can reach out to him directly using our contact form.
Discuss this article
Log in to comment
Posts in discussion: Razer Lycosa Mirror Edition