Radio Detection and Ranging.   We commonly refer to this technology as radar.  A priceless boon to military efforts anywhere, oft the chagrin of gamers everywhere.  Strategy itself can be turned on its head in any game that allows the use of this technology.  Did I mention that a radar display generally looks pretty sweet?  Evo-G has picked up on this fact, and used the concept when developing their IMP1 Illuminated Mouse Pad.  Whether the intention is to rub salt in the wounds of all gamers betrayed by radar, or to simply look cool remains to be seen, but the IMP1 is marketed as a gaming mouse pad and Evo-G tossed one our way to find out some stuff for ourselves.

Soft and Slip-proof Rubber Base 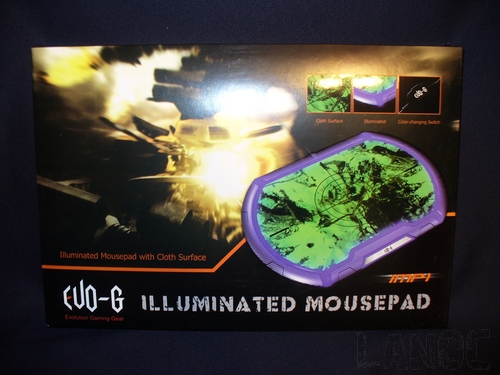 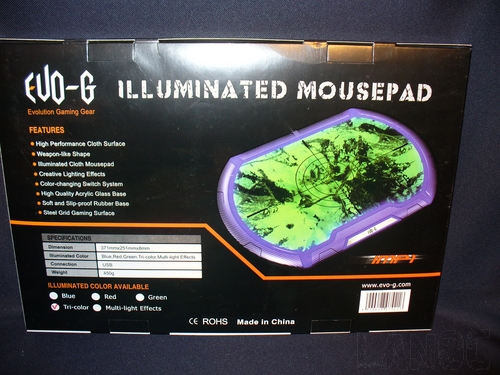 Glad to see a box rather than razor sharp plastic.  The design on the box is fairly standard with a few pictures of the product and some ambiguous explosion.  It doesn't say or show what exploded, perhaps it was a puppy?  Or that the product itself is so hardcore that it spontaneously combusted.  Anyway, typical fair here, with a large picture on the front and specs listed on the back.  Inside the mouse pad is wrapped in something akin to shrink-wrap with the cord wrapped and sealed individually. 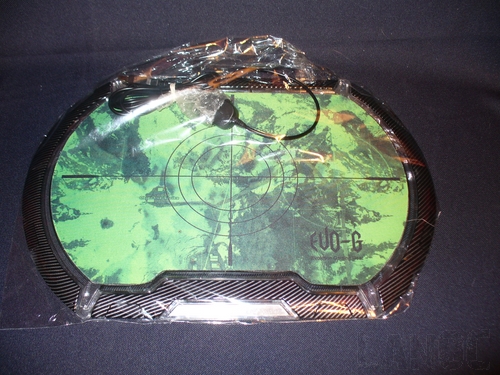 This may be just me, but the shape of the entire pad reminds me of a HUD (Heads Up Display).  Maybe that's what they were going for but they list it as a weapon-like shape.  The actual pad portion is printed to resemble a fictitious radar readout mid-"ping".  The border is what really makes this mouse pad stand out, as it is the illumination the name is derived from.  Made of acrylic glass, it allows an LED to light the border in red, green, or blue.  An outer border is present as a flat black with silver zigzags and a metal portion along the bottom etched with the Evo-G logo.  The actual composition of the pad is somewhat different from the norm as well.  The whole mouse pad is made of acrylic with the exception of the pad, which is only about 3 millimeters thick.  This makes it feel as though it's a hard mouse pad even though it has the texture of a soft pad.  The best of both worlds, in my opinion. The pad aids in tracking remarkably well, giving it my support of its hybrid nature as well as my approval for gaming. However, the plastic borders as well as transitions in composition lead to my complaints about this product.  First of all, the plastic makeup of this mouse pad causes it to be raised about a centimeter off of the desk, which can become somewhat uncomfortable. 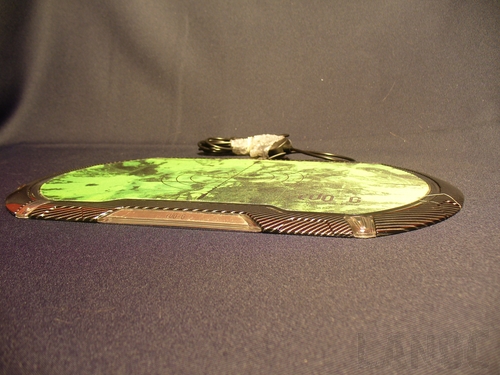 Also, the move from soft fabric to plastic means that the borders are hard limits to your movement.  The mouse pad isn't very large so this happens more often than I would like.  Another thing that people may or may not be so hot on, is the fact that it is powered by USB.  I don't know about you, but my computer's USB ports are getting a little crowded.  Better, I suppose, than an actual power adapter that plugs in the wall. Style If there was ever a mouse pad produced specifically with style in mind, this would be it.  The radar printed design instantly sets this mouse pad apart from others.  This makes the pad predominantly green with black silhouettes which Evo-G has labeled with random things like "Objective Strike" and "Bravo 1"  Perhaps what enforces the HUD perception is that in the middle of the "display" there is a large cross-hair indicating that Bravo 1 is about to get some lovin'.  Evo-G also saw fit to print its name in large text on the bottom right of the pad.  The green, blue, and red lighting choices are nice because they make the mouse pad welcome in any lighting theme. 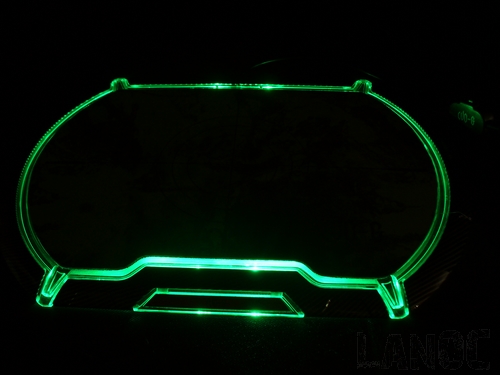 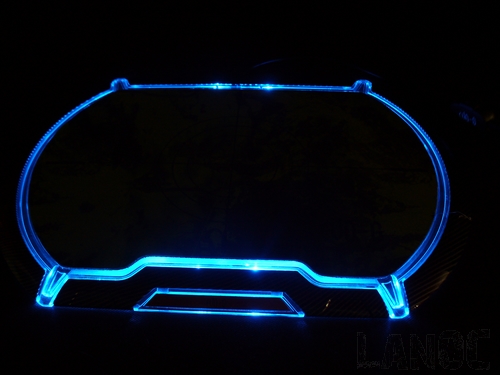 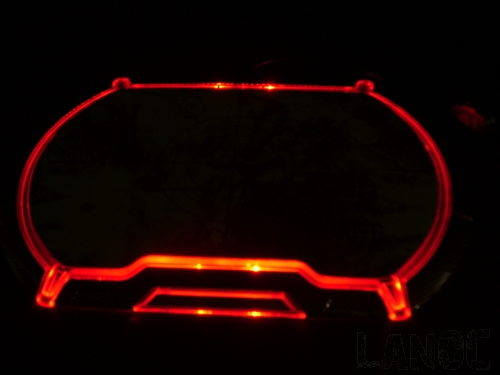 Not so welcome is the fluorescent green used for the radar image.  What would have been really innovative is if the actual "display" glowed the color of choice as well, not simply a static green.  Evo-G was innovative enough, however, to attach a little controller along the power cable that allows us to change the color, as well as the brightness. 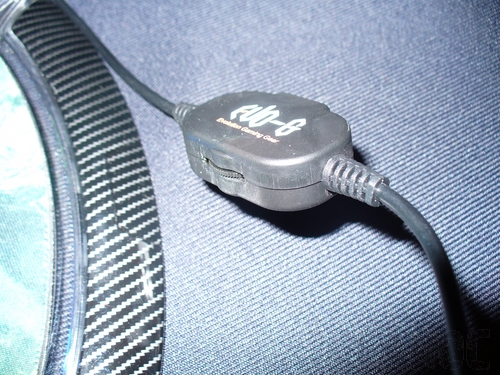 This has also been shamelessly painted with the Evo-G logo, making it the third one on the actual product!

Normally, I never have to raise this issue with a product.  The limited time between being sent a product and writing a review for the product generally is not very conductive to testing for quality.  Interestingly enough, our review sample stopped working without any real explanation approximately two weeks after receiving it.  The mouse pad traveled with me in the car on two separate occasions, that being about the extent of any abnormal wear and tear.  We surmised that at some point the cable may have been inadvertently pulled too hard, but there is no evidence thus.  The actual pad is intact, meaning there is nothing preventing it from being used, but with no light emanating from the pad, it becomes somewhat sub-par.  We contacted Evo-G about this, and their response left room for optimism. They told us that the problem we experienced was not common and offered to replace it.  As for whether or not this is true, and the average customer would get such an offer, we'll let you make the call.

The IMP1 provides a very nice surface for gaming mice, but offers limited space due to the borders.  It can also be somewhat uncomfortable due to the height that it sits at.  The lights are definitely unique though, and it is my impression that you trade a bit of substance for style.  That happens to be some people's bag however - that wow factor can be too good to pass up.  I wasn't impressed with the product failure we ran into, but there is nothing about the quality of the product that suggests to me that it happens often.  I think that the small amount that this product suffers performance wise is made up for in cool points, making the end result an average product, that a consumer should pick up at his or her own discretion. 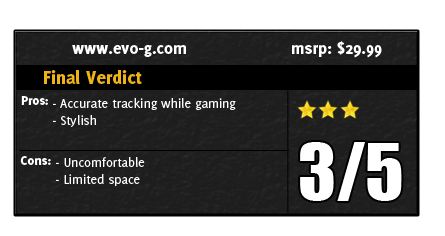 You might call him obsessed or just a hardcore geek. Wes's obsession with gaming hardware and gadgets isn't anything new, he could be found taking things apart even as a child. When not poking around in PC's he can be found playing League of Legends, Awesomenauts, or Civilization 5 or watching a wide variety of TV shows and Movies. A car guy at heart, the same things that draw him into tweaking cars apply when building good looking fast computers. If you are interested in writing for Wes here at LanOC you can reach out to him directly using our contact form.
Discuss this article
Log in to comment
Posts in discussion: Evo-G IMP1 Illuminated Mouse Pad

We have 753 guests and one member online