Of the 2,195 power supplies currently listed on the 80 plus website, only 186 of them are certified 80+ gold. That means just over 11% of the power supplies tested meet or beat their highest standard. Although not listed on the 80+ website yet, Sparkle Computer Corp is gearing up to release a monster of a power supply. At 1250 watts it puts out nearly double the power of most of the other 80+ gold PSU’s. That high standard most likely is the reason for the “Gold Class” name; let’s dig in and learn a little more about it. 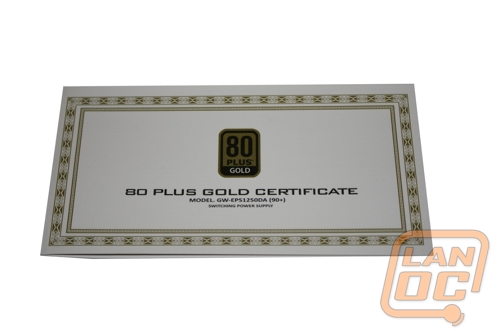 A high end power supply can be one of your largest purchases when building a computer, and its hard not to get a little excited about it when you see packaging like this. The outside has all the important information including a picture of the PSU, specifications listing, and a feature list. Inside Sparkle clearly spent time making sure everything was showcased. The documentation is great, even including documentation on the tests ran for its 80+ Gold certification. Also included with the documentation was a $100 value gift card. The card itself has all the instructions needed to redeem (you must mail the card in to redeem). Digging around on their website I found that the card will get you three popular games including a LanOC favorite, H.A.W.X. The power supply itself was packed securely with foam on each side and to prevent any scratches to the mirror finish, while the PSU itself came in a protective sack. The cables came in their own bag to prevent any from coming up missing later. 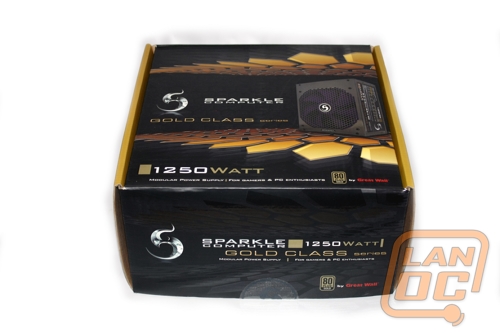 Installing the Gold Class into our test rig, I was impressed right away with the size of the power supply. With the high wattage normally you see a slightly longer casing, the smaller size made it much easier to fit this monster in even the tightest spaces. Another issue I have had with other modular power supplies is the inclusion of both a P4 (4 pin CPU) and EPS12V (8 pin CPU) cables. You obviously can’t use both at the same time, unfortunately most of the time you can’t do anything with the extra cable other than tuck it away somewhere (even on most modular PSU’s). Sparkle has obviously thought of this and the Gold Class is missing the outdated and unneeded P4 connector making hiding wires unneeded.

The bag of wires had 4 SATA cables, 3 Molex, and 4 PCI Express cables. I was surprised that the Molex and SATA cables all came the same length. Sometimes you see modular cables come in different lengths to help you get the best fit possible. Also another interesting note is each of the PCI Express cables has two plugs on them. Normally you would have to run two cords to each video card. This made for one less cable on our install, although I’m curious how that will affect performance. 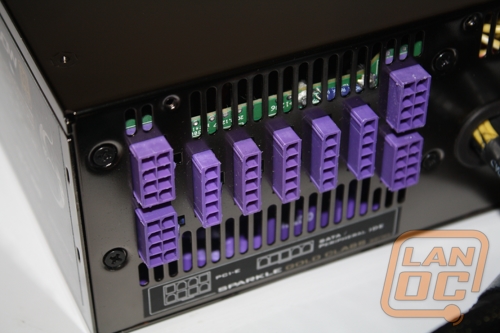 Putting this power supply under a load for most, including me, is a tall order. 1250 watts is a lot of power and all but the highest end rigs won’t come close to needing this much. For our testing I used two 4870’s in crossfire, the 4870’s use considerably more power when compared to the 5000 series (5870 - 188w, 4870 – 359w). Using 3DMark Vantage to put the power supply under a load consistently I watched the voltage drop and recorded it in the following graph. 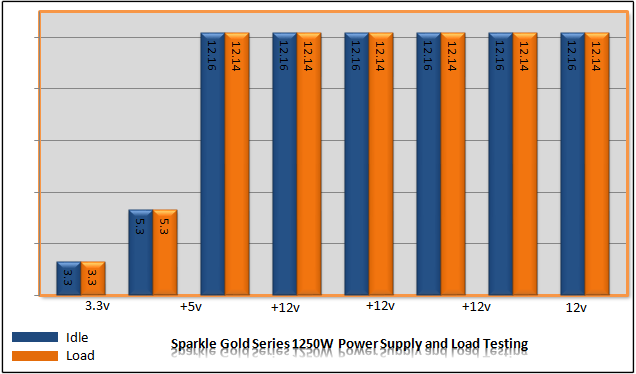 As you can see this monster of a power supply is almost completely unaffected by the two power hungry 4870’s. Part of that has to do with the 1250 watt output, but the gold efficiency rating plays a part also. It’s going to take multiple GTX 480’s to put it under a full load. The 1000 watt version of this same power supply should be more than powerful enough for most enthusiasts needs. 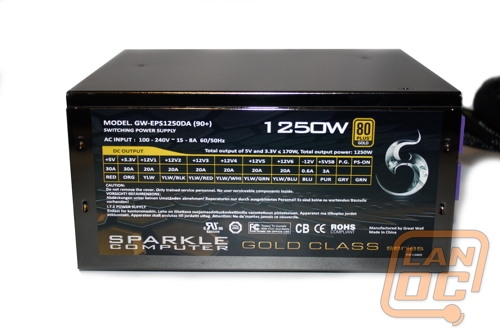 Of course there is more to performance than just power output and efficiency. You may be curious how well that 139mm fan keeps things cool and how noisy it can get while doing that. The fan was surprisingly quiet but not silent. When turned on initially with the fan at full blast and hard to ignore. Soon after the initial surge the fan dropped down to a barely audible level. During load testing I was able to get the fan to speed up slightly, but not enough to make much noise; obviously it’s going to take a monster build to heat this thing up. 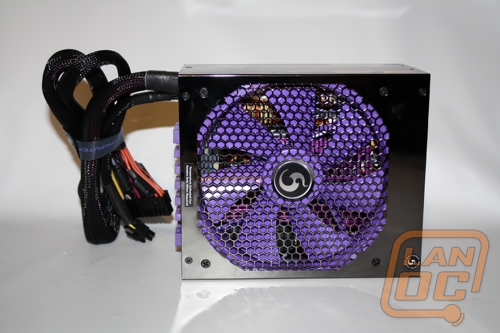 This power supply is best described as a monster. Everything about it is a notch above other power supply’s we have reviewed. The purple coloring on the fan and modular connections is different and may not match your build. For such a high output and efficient design it’s amazing they were able to pack it into a small frame. It’s so powerful that I wasn’t able to put it under a full load; it swallowed up the two power hungry 4870’s and spit them out. Because of this you will be tough to get the 139mm fan to speed up enough to make an noticeable noise. Combining that with its 80+ gold efficiency rating and you have an impressive PSU all around. Sparkle Computer Corp has outdone themselves this time. 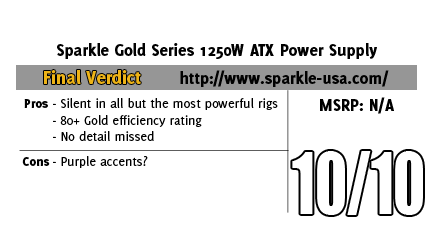 You might call him obsessed or just a hardcore geek. Wes's obsession with gaming hardware and gadgets isn't anything new, he could be found taking things apart even as a child. When not poking around in PC's he can be found playing League of Legends, Awesomenauts, or Civilization 5 or watching a wide variety of TV shows and Movies. A car guy at heart, the same things that draw him into tweaking cars apply when building good looking fast computers. If you are interested in writing for Wes here at LanOC you can reach out to him directly using our contact form.
Discuss this article
Log in to comment
Posts in discussion: Sparkle Gold Series 1250W ATX Power Supply