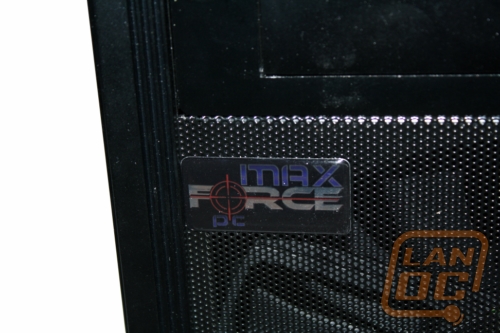 Based out of Michigan, MaxForce PC has been creating custom rigs tailored suited to customer requests since 2007. To further suit customer needs, they will even track down a part not listed on their site to install in your system. Max contacted us a while back to see if we were interested in reviewing one of his enthusiast gaming build's, the Javelin P55. Since it was right down our alley and had a perfect LAN situation to test it out in, we took the oppourtunity.

Pictures by: Wes and Adam

MaxForce sent us the Javelin P55 secured twice in the original chassis box and a larger shipping box, the former cushioned inside with air-bubbled material, and the system itself nestled in foam placeholders.  The material used did a great job protecting the P55, though the power switch came unplugged during shipping. 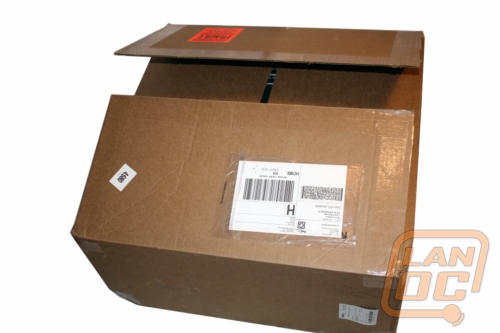 The maiden opening happened to be at one of our semi-annual LAN events, at which during set-up a particular staff member's anxiety got the best of him, and he opened the system without photographing the experience. So, using our skill level 250 investigation skills, we re-assembled the packaging and considering the absence of damage have no doubt in this area. 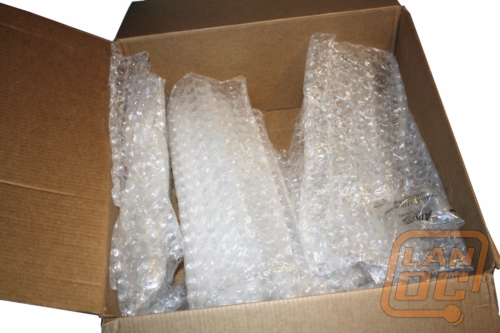 MaxForce also includes great documentation with purchase, all organized nicely in a binder containing parts list, benchmark results, an introduction, warranty information through MaxForce and individual hardware manufactures, additional information and suggestions, as well as an installation guide and recovery information, all rounded out with the overclock settings. The final sheet holds all the contact information you could ask for, including individual companies of your components and technical support for MaxForce. 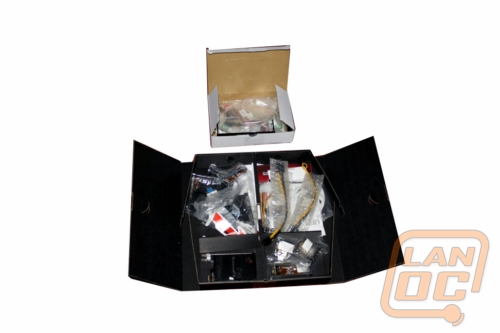 Hardware
The Javelin P55 is assembled using the NZXT Panzerbox mid-tower, which is especially ideal for the LAN setting for several reasons. First, the Panzerbox is crafted entirely of aluminum, which aids in heat dissipation and also much lighter than alternative materials, which is key when frequenting LAN parties often. Its also on the smaller side of the LAN spectrum, so its easy to handle and transport, but still support enthusiast hardware, as you will soon read. 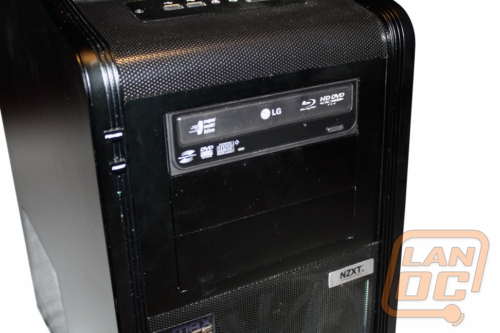 The P55 in the Javelin's name refers to the motherboard inside, this particular model being the Asus Maximus III Formula. This board supports SLI and Crossfire, sports up to 16GB DDR3 memory, nine USB 2.0 ports, and some impressive storage options with ten SATA2 ports and one eSATA, all at an ATX build. 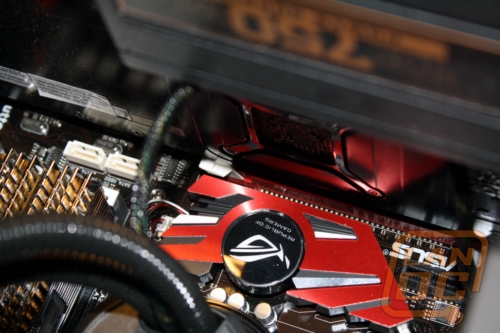 Equipped on that P55 is an 860 Intel i7 processor, with 8MB cache and comes overclocked to 3.80Ghz. Users especially wary about frying their high-end purchase can rest at ease knowing that MaxForce has opted to take advantage of the Panzerbox's water cooling capabilities. The CPU is cooled with a Corsair CWCH50, a reasonably priced waterblock equipped with a 120mm fan and designed for performance. Saving yourself the trouble of installing water cooling is valuable enough, especially for beginners, but is even more appealing since the H50 is generally maintaince free. 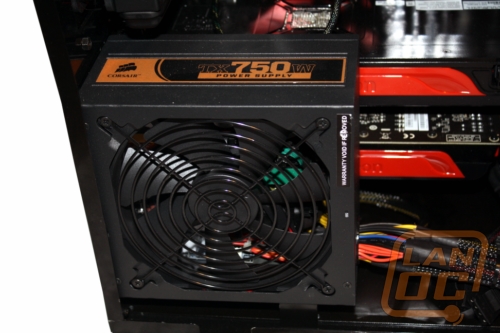 Corsair also manufactured the chosen power supply for the Javelin P55, the CMPSU-750TX. This 750W unit provides adequate power to the high demands of this build, and comes with a nice price tag as well. It also sports a few nice features, including one +12V rail that eliminates manual tweaking. For those concerned about energy consumption, the PSU is also rated at 80% effeciency to reduce waste.

Memory is addressed with four sticks of 2GB Super-Talent DDR3 CL7, totaling to 8GB in RAM. Super Talent isn't as well-known as some of the more established memory companies such as Crucial or OCZ, but provide high performance memory at a nice price. Internal storage is comprised of an 80GB SSD from Intel, the X25-M, which holds the operating system for peak responsiveness, and a Western Digital Blue 1TB to cover any other data. At almost $300 MSRP, those looking to lower the overall cost of the system might opt to install the OS on a cheaper drive and sacrifice the quicker loading times of the faster SSD, without affecting much of the actual in-game performance. 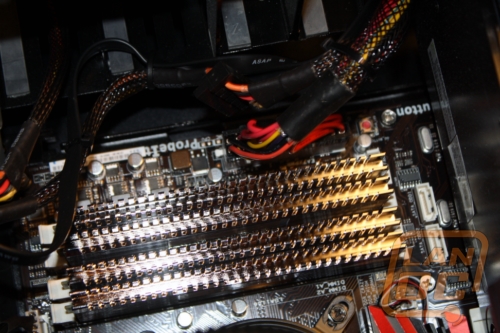 The aformentioned operating system is none-other than Windows 7, which is Home Premium 64-bit, a nice choice for this type of build. With gaming often coinciding with a number of other PC enthusiast activites, the availilbility of the features in this package are a definite plus.

Speaking some to that enthusiast trait, MaxForce has installed an LG Blu-Ray reader, LightScribe model at 8x read speed. Again, a typical DVD-ROM would more than suffice for the needs of the current gamer and save you around $50, but if BluRays are something you have any interest in at all, equipping your PC with it for that price is a fraction of what it would cost to invest in a player itself. It also may be a good investment in the future of gaming, since BluRay format may someday be the new DVD.

The Javelin is also improves on the standard integrated sound, equipped with a Fatal1ty X-Fi XtremeGamer Sound Blaster. While sound is becoming an essential aspect of modern games, i.e. Modern Warfare, most standard sound would usually suffice and save you $100 of the cost. In addition, the motherboard choice also comes with a nice sound card included.

The Javelin P55 is completed with two CrossFire X Radeon graphic cards, the HD 5870 and HD 5850. These are both very nice models and perform very well, but in our situation we were left wondering: with a price difference of around $30 on Newegg, why wouldn't one chose to install two 5870's? The performance, as you will see, isn't lacking in any means, but it is an interesting choice nonetheless. 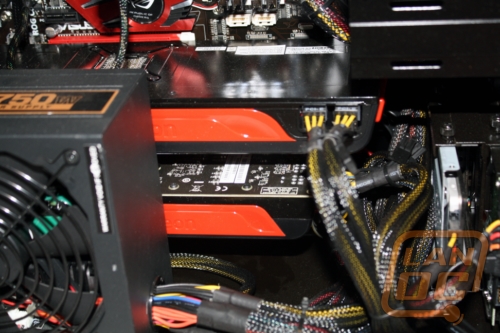 Performance
The SSD holds a nice little chunk of the overall price, but the speed gain is quite impressive. Compared to the 7200RPM 1TB HDD, the read speed is nearly 81% faster on the SSD with a rate of 250.8 MB/sec compared to 138.8MB/sec. For our write speeds, we received some interesting results because of two factors: one, the SSD only has a capacity of 80GB, which as you can see is 89% full, and two, it's 89% full because we installed Steam on it. So the figure is a quite a bit bottlenecked to actual performance, but is an excellent example of what you can run into when you put load on an SSD. 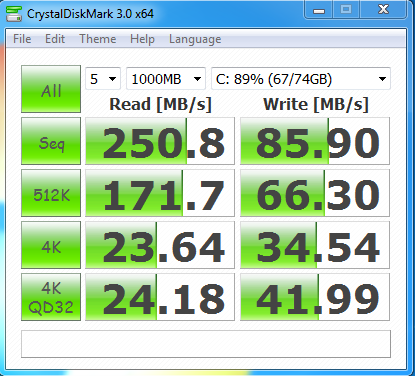 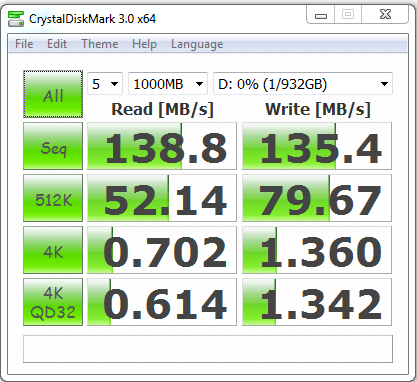 Graphically, the Javelin P55 performed extremely well. The 5870/5850 combo brought in some impressive numbers using PCMark Vantage, 3D Mark Vantage, and 3D Mark 06. Using the synthetic benchmarking, we tested both performance and high settings. Those presets in 3DMark Vantage (with no other alterations) recorded a frame-rate per second of 74.03 in test 1 and 68.95 in test 2 and 53.62 and 47.43 likewise in the high setting, respectively. The CPU score was very consistent between the two setting, while the GPU saw only a decrease of 7,000; relatively not a huge difference considering the setting change. In 3DMark 06, the system scored a 25093, which is considerably higher than 75% trend of testing. 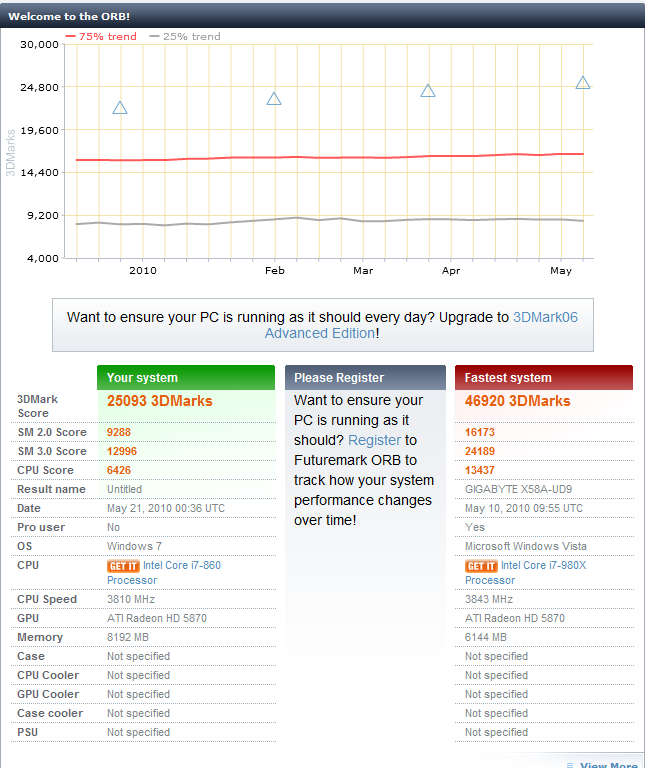 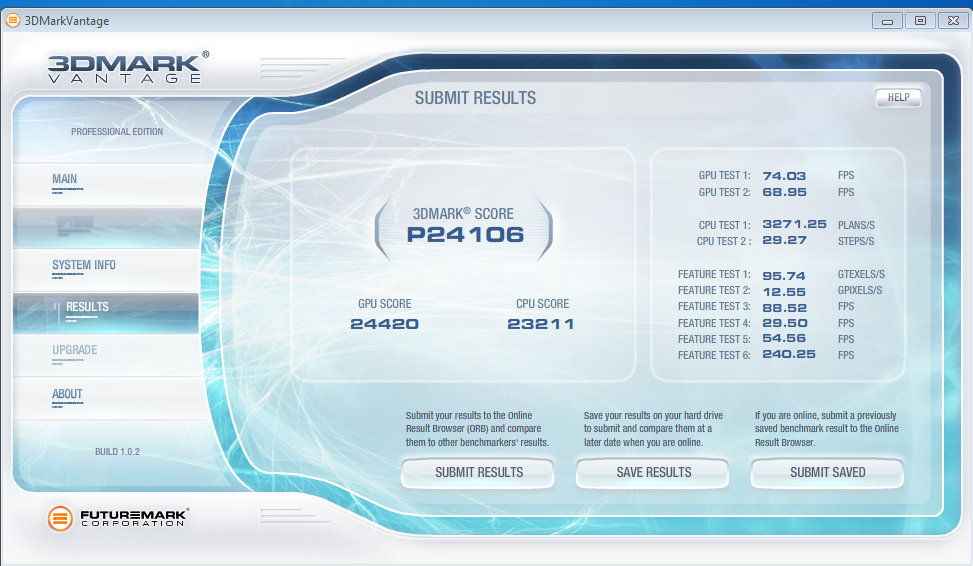 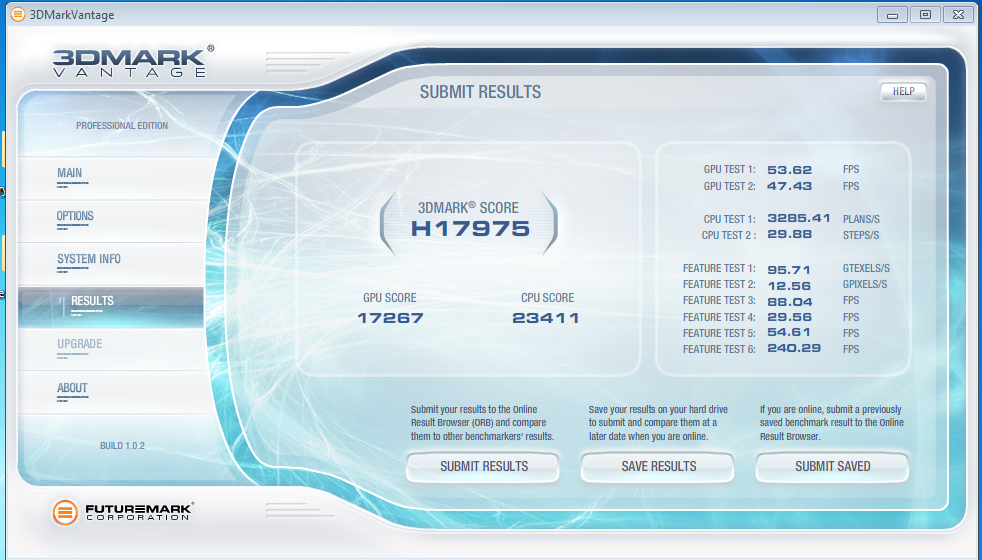 The PCMark Vantage synthetical give us an insight into many other functions of the PC, including memory, gaming, music, and productivity. Scoring a nice 14333 in overall, the Javelin saw it's gaming performance second only to the HDD, no doubt thanks to the $300 SSD. 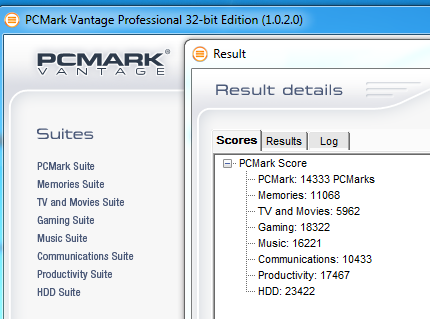 Real-life game tests performed on the system including both Call of Duty: Modern Warfare 2, in a 1920x1080 resolution and using FRAPS to benchmark frame rates. Again, the CrossFire X Radeon's peformed excellent under the pressures of one of the industry's most demanding titles, processing 5,347 frames in 60,000 milliseconds, a minimum rate of 71, maximum of 113, averaging out to 89.117 FPS. 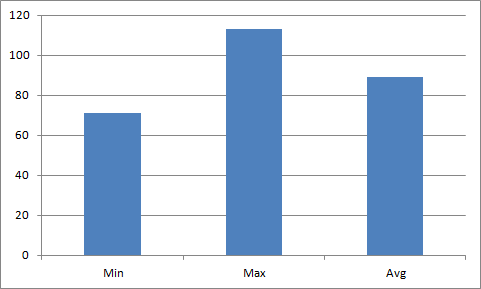 Overall
Assembling the build of the MaxForce P55 yourself would cost roughly $2,500, while as tested our system totals to $2,746. The system is simply a great performer, pulling in impressive rates both from synthetic and actual game testing. Adding even more to the value is the portability of the chosen chassis, which your back will thank you several times over for. Considering MaxForce has acquired the parts (and is willing to honor special requests), assembles them well, and overclocks and cools adequately, not to mention takes care in shipping, a $300 price difference between DIY and order. Considering neither includes shipping, you could easily fill the gap paying costs for individual parts as opposed to $60 from MaxForce if you're willing to go with standard ground delivery. 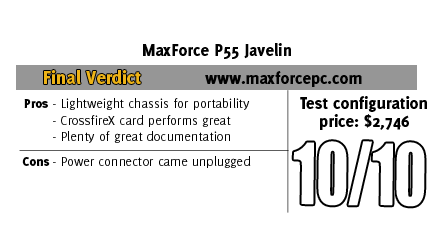 Author: Lersar
Contributing Editor / Event Staff
Adam is a big proponent of LAN parties, esports and speed-running, and helps organize our semi-annual LAN events. He has covered hardware and software reviews of a wide variety, but most content these days come from event coverage, such as other LAN parties.
Discuss this article
Log in to comment
Posts in discussion: MaxForce P55 Javelin

We have 1480 guests and one member online