Gaming mice are quickly approaching the point in which a unique look is in itself a cliché. Visual appeal was once a new, exciting feature that attracted the attention of the demanding gaming crowd. It has become so standard today that sometimes functionality is sacrificed for a novelty design. The Spawn was on display for us this year at CES, a unique device that did, indeed, catch our eye. Does it fall victim to vanity, or prove its value in one of the harshest gaming genres?

Packaging
The CM Storm Spawn justifies a window panel package, since images of the mouse don't quite do it justice. The first, and admittedly shallow, reason I was drawn to the Spawn was its look. The action shot on the front of the box is from an angle that makes the mouse look similar to a full-sized mouse, when in reality it is only about 75% of your average peripheral. 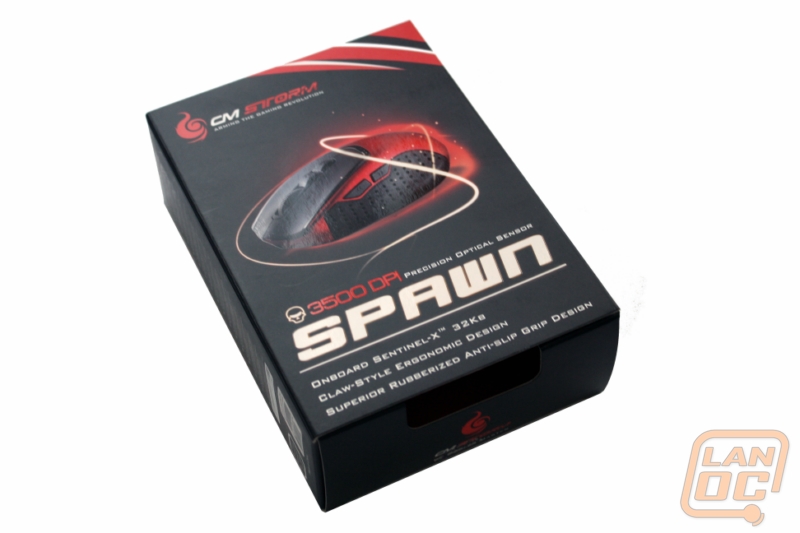 The remaining real estate on the front is occupied with a few key feature call-outs, including the on-board microprocessor, the specific design (which we'll discuss in depth later in this review), and grip-ability. Want more specifications? Flip the box over to find an entire list. If you like that, open the door flap to see not only the Spawn directly behind a plastic window, but also a feature-photo of the mouse. On the reverse side of the plastic shell is a small guideline pamphlet and driver disc. 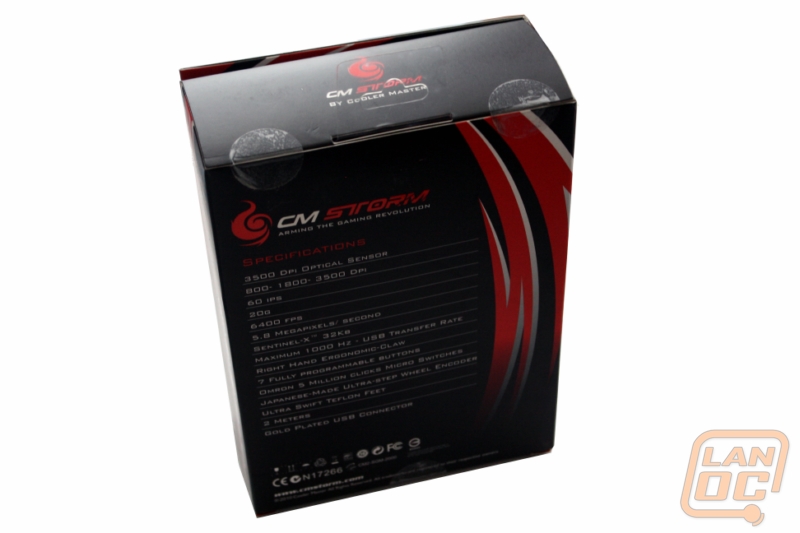 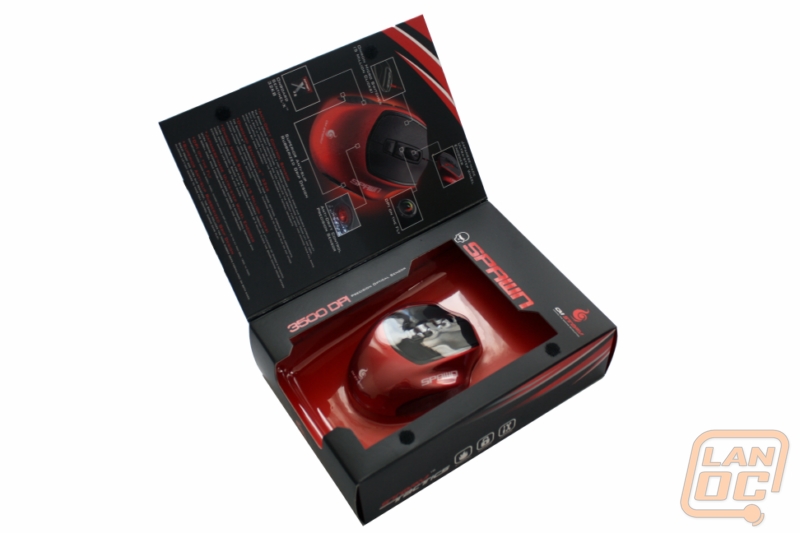 Design
The Spawn isn't the first mouse to target a specific grip. There have been plenty of mice that appeal to the ergonomics of certain play styles: the Logitech G9 is a popular claw-style mouse, the Razer DeathAdder is popular among palm-grip gamers, and the Logitech G9 is recommended by many who use the finger-grip style. Interestingly, the opinions on which mouse is best for which grip preference on many of the gaming forums I researched included repeats; the Logitech MX518 came up several times, while the DeathAdder and especially the SteelSeries Xai were mentioned in each category. 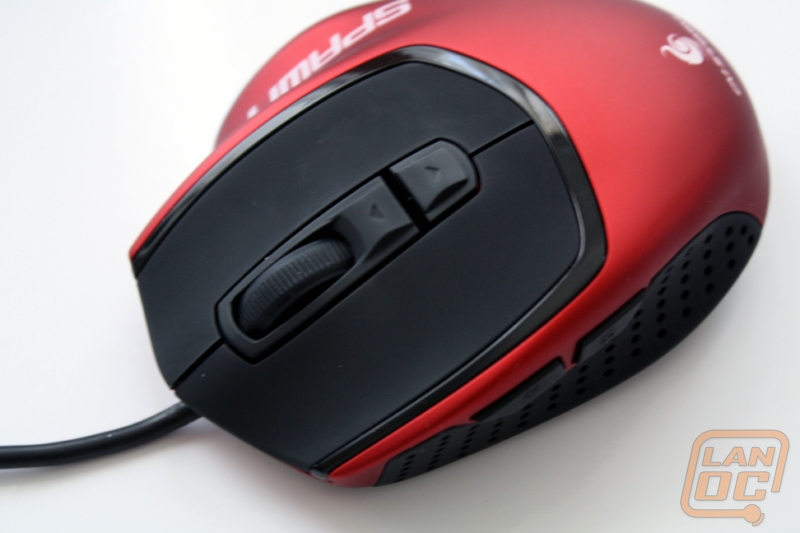 A subject area such as comfort-ability is naturally going to get a lot of different opinions, especially when it can potentially affect in-game performance. To better understand whether the Spawn is truly optimized for claw-grip gamers, let's take a closer look at the characteristics of the style itself. The name comes from the resemblance of an animal claw when in proper use, most often using the index, middle, and ring finger at an arch to pull the rear of the mouse into the pit of the palm. The benefits include a distinct separation of left- and right-click, as well as reducing the contact between you and your surface, allowing for fast and precise reactions.


Software
The suite that will install with the Spawn mouse includes the usual archetype with a mouse layout and assignment function at home screen and tabs along the top for further customization. This software is much simpler to use than that which came with the Storm Sentinel, but some more advanced tweaking is sacrificed to be so. Where the Sentinel allowed for users to adjust DPI to any value on a scale between 100 and 5600 on both axes, the Spawn will only allow for the choice between three preset values: 800, 1800, and 3500. While these will cater the needs of most gamers, if there was ever a group that could justify needing bizarre DPI settings, it's the first-persons. In a mouse that designed to appeal to the FPS crowd, being unable to customize any deeper than three levels seems like a strange restriction. 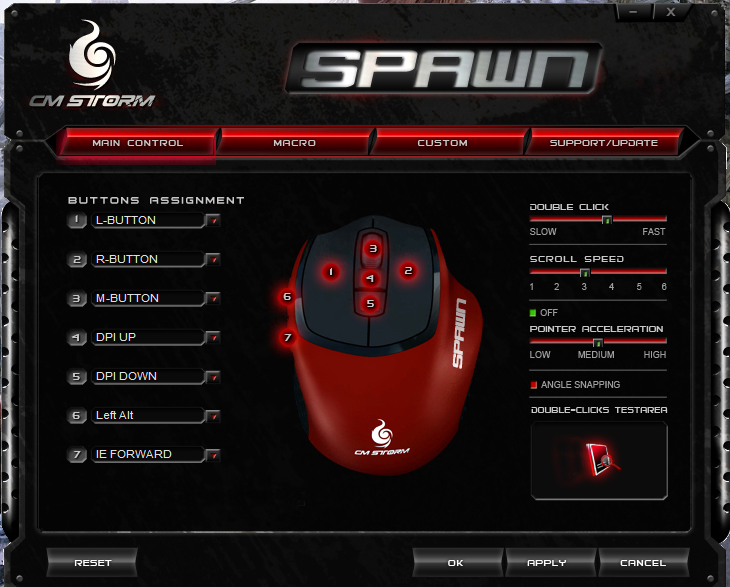 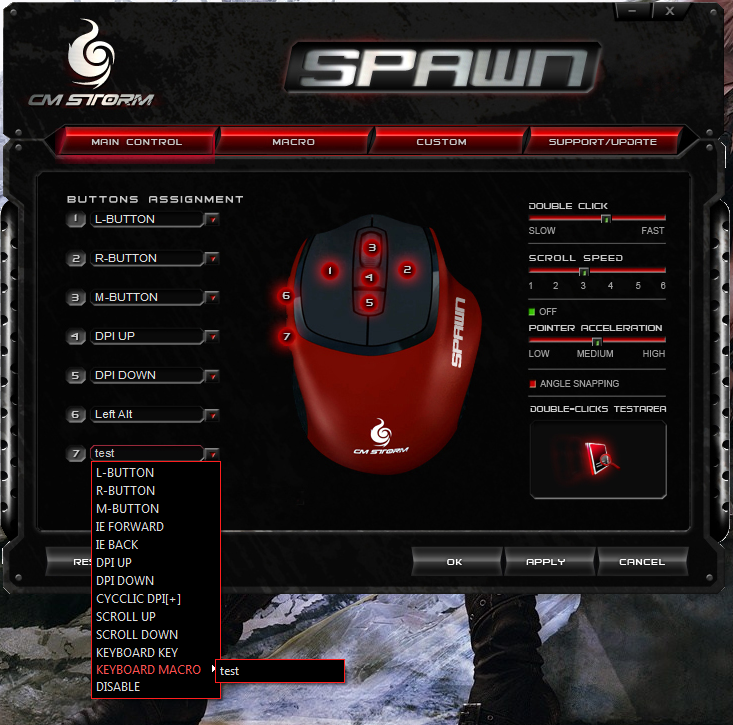 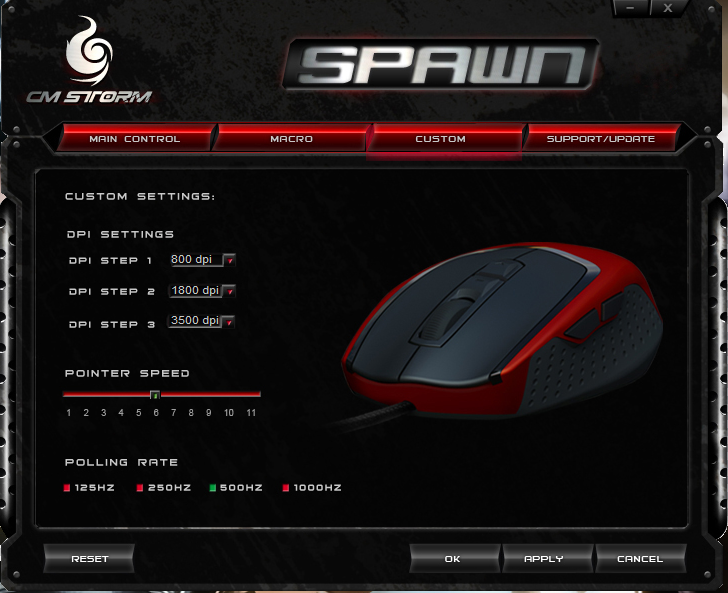 The macro functionality is much better in for the Spawn's suite, simple and friendly to use. There is a limit of ten events (e.g. space bar press down and released would be two), but for the target audience this should be plenty, since FP gamers will most likely be assigning single key binds to the extra buttons. The software does lack the rapid fire ability that generated a lot of attention from the Sentinel and Inferno, but the exclusion does make the Spawn a better candidate for sanction or official tournament play. 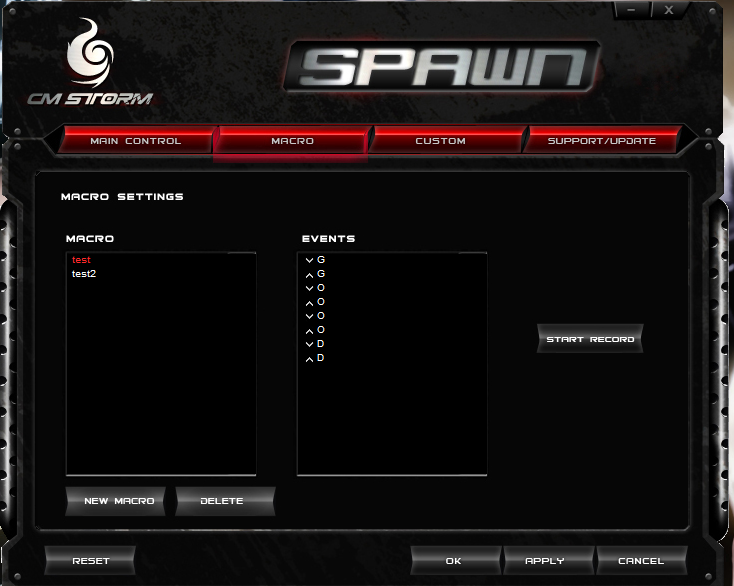 Performance
Reviewing such a mouse requires one to introspect on his own play style. I’ve used a lot of mice over the years, and even now use a few different models depending on which computer I’m at. I had never paid much attention to it before, but they all favor the palm-grip style. In testing the Spawn, not only was I switching from my traditional hardware, I was also going to have to change the entire way I controlled the game. Needless to say, this complicates the already difficult to determine performance aspect.

Let’s begin with the more concrete features of the mouse, such as layout. The Spawn features a seven button assignment design, with the traditional right/left click, scroll click, DPI increase/decrease buttons, and two thumb buttons. The DPI can be switched on-the-fly, from 800 to 1800 to 3500, and is well positioned to reach with the index finger when needed. The thumb buttons however seem a little too far forward on the mouse, with only the rear-most button comfortably accessible without moving the entire hand. 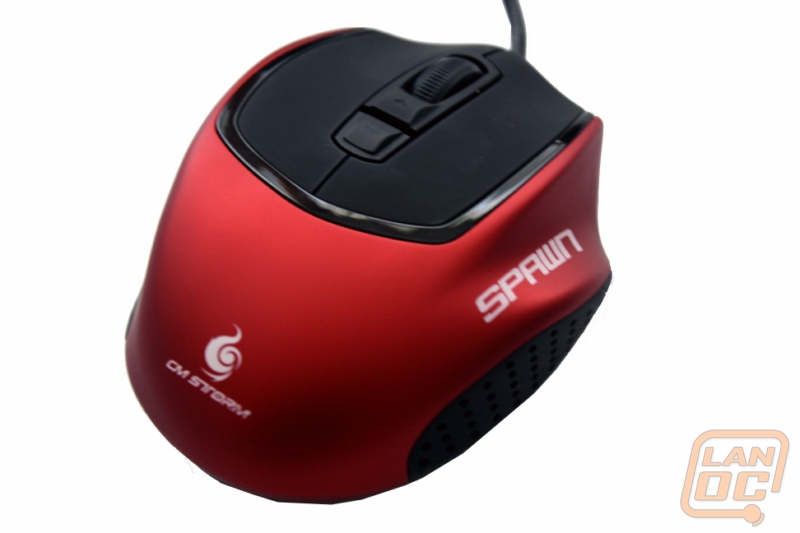 The Spawn is crafted from both rubber and ABS plastic, which is known for its impact resistance, a great feature given the abusive relationship first-person shooter gamers typically have with their mice. The majority of the shell is the crimson red plastic, with anti-slip rubber grips on both the left and right side, directly where the thumb and pinky naturally rest during the claw-grip position. These rubberized grips aren’t the typical thin layer of coating, but rather whole, thick pieces with rivet holes to combat sweat when the gamer is under pressure. I noticed several times during play and stressful situations, I would squeeze in these areas, especially with my thumb, and the rubber would actually give a little. I felt like this really helped ensure grip, and was more comfortable than the aforementioned thin rubber, in which the hard plastic of the chassis underneath can be felt.

Cooler Master also advertises the Storm with an anti-drift control sensor, which is a critical aspect especially given the twitch-like aspect of popular titles such as Call of Duty: Modern Warfare2. While maintaining the cursor position isn't absolute on lifts and drops of the mouse, it does keep it in a manageable radius, and doesn't suffer from the Z-Axis drift issue we've seen in the past. 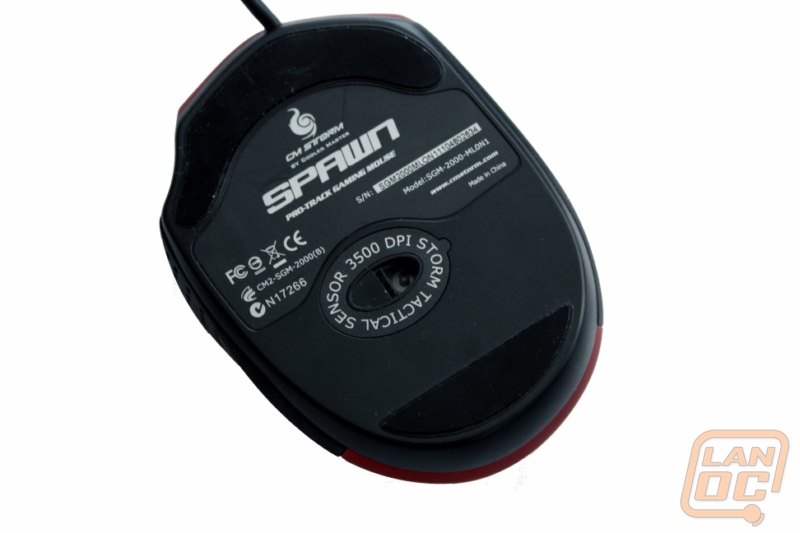 The board features the Sentinel-X microprocessor, which uses 32KB to store customized settings, from DPI to strings of macros. This is a nice feature we are seeing more and more with mice, not only acting as a sort of back-up but also allowing you to plug and play on any system and carry your preferences with you. The guts of the Spawn are finished with quality switches from Omron Global, which is top ranked in electronic components. That sort of title carries a guarantee of a minimum of five millions clicks, which is a feature that is by no means limited to the FPS genre.

After using the Spawn in titles such as Call of Duty Black Ops, Quake Live, and Monday Night Combat, I wanted to compare it to other mice known to work well with the claw-grip style. The Razer Diamondback was one, the body of which is longer and slim, the back curving sharply to prop the bottom of the palm, allowing for a comfortable claw position.

The Spawn, as mentioned earlier, is shorter than most mice, essentially eliminating the rear portion of the peripheral. This results in the users palm already positioned near what is usually the middle of any other mouse, which means the fingers don't have the length of the mouse to stretch out on, forcing them at an angle, and thus into the claw-grip. Those who are accustomed to stretching out their fingers (adopting more of a fingertip approach) may find themselves resting the palm on the gaming surface as opposed to the mouse. The first-person shooter genre is often reliant on quick hand movements across the entire surface, and resting the palm on the mouse as opposed to the surface eliminates traction and results in faster movement.

Overall
I replaced the mouse on my main gaming PC with the Spawn for about two months. During that time it experienced countless late night FPS sessions, several spontaneous MMO fixes, and more than a few discouraging-yet-persistent RTS online matches. The Spawn assisted me well in the first-person realm, training my hand into the claw-position, which allowed for quicker and more precise actions. The Spawn can be used in other genres, but is average at best. In some cases, the lack of a gradual rear-decline as in typical mice created some discomfort, especially in extended play periods. Though I'm lobbying for the picky gamers who are convinced their DPI has to be 2957 in order to play the best, the Spawn does make up for it in simplicity, durability, top-of-the-line tech especially with a price-tag that trumps many of its competitors. 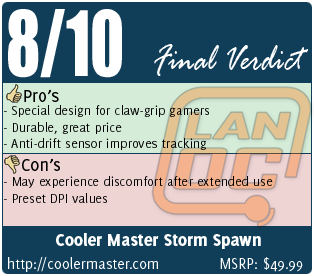 Author: Lersar
Contributing Editor / Event Staff
Adam is a big proponent of LAN parties, esports and speed-running, and helps organize our semi-annual LAN events. He has covered hardware and software reviews of a wide variety, but most content these days come from event coverage, such as other LAN parties.
Discuss this article
Log in to comment
Posts in discussion: Cooler Master Storm Spawn