With a MSRP under $35 SteelSeries took a different approach to the Kinzu than with their other mice. At a price that is in direct competition to Microsoft’s X3 and Razer’s Salmosa the Kinzu could be a great  entry level gaming mouse. But after you take all of the costly features off, is it still a gaming mouse? Or has it been watered down to a step above your basic ball mouse? Let’s find out. 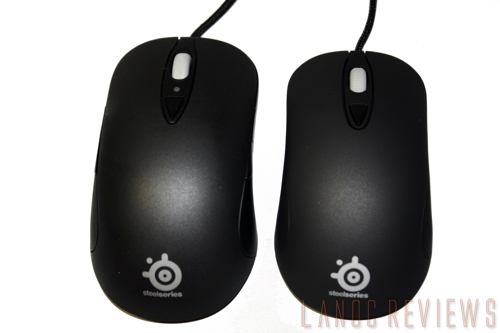 Xai on the left, Kinzu on the right 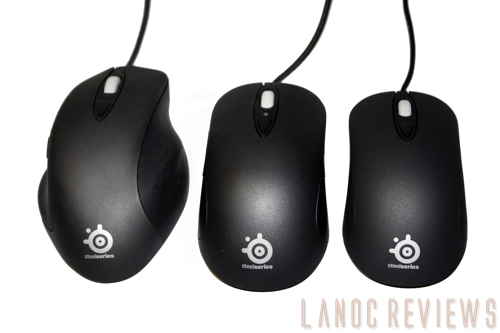 Steel Series packaging hasn’t changed much in the past few years that we have been working with them. The Kinzu’s packaging isn’t any different. It's smaller than both the Xai and Ikari, but still shares the same dark grey color of the others. The front of the package gives you access to the mouse through a window and helps you to get an idea of the shape and size of the mouse. On the back there are a few very small pictures of the Kinzu with a feature list that points to important features on the mouse. Inside there was a pamphlet but oddly enough no software disc. 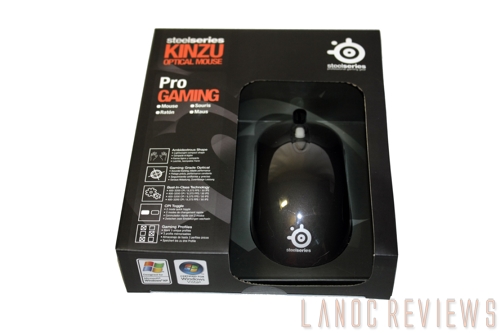 Once downloaded and installed I was shocked at the lack of adjust-ability that the Kinzu’s software provides. CPI adjustments were limited to four different settings along with three options for the polling rating. Windows sensitivity, acceleration, and scroll wheel speed where also available. The mouse lacks the ability to program any of the buttons, with this being a staple in other gaming mice; it was surprising to see it missing in the Kinzu’s software. The only other option you have is to change the language, but in the version we downloaded at English is the only option available. You can see three different profiles but is there really three different ways you could combine the limited number of options? 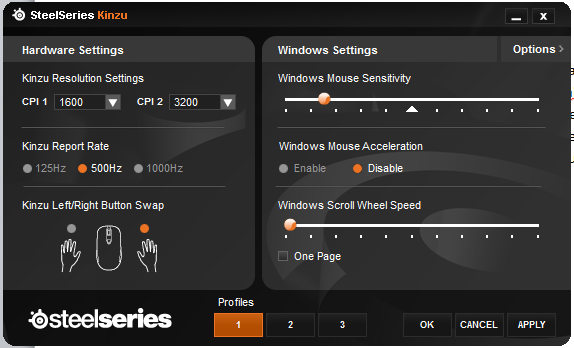 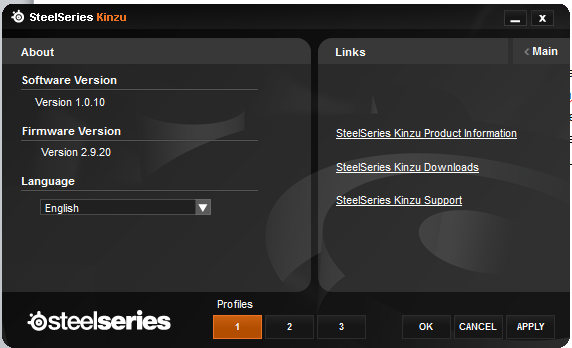 The Kinzu has to be one of the smallest mice I have ever worked with that is not specifically designed for notebook use. So small that they couldn’t squeeze any extra buttons into the mix, another feature that is typical on a gaming mouse. Because of the small size I didn’t find the Kinzu to be very comfortable. The shape of the Kinzu itself is just a scaled down version of the Xai that we reviewed earlier, but the size apparently makes all the difference. The Kinzu also shares a similar scroll wheel design with the Xai. Just like the other Steel Series mice you won’t find any lighting or other fancy stuff here, the rubber scroll wheel is everything you need and nothing you don’t. On the bottom three large gliders help you slide around freely on both hard and soft mouse pads. Outside of the left and right triggers the only other button on the mouse is located behind the scroll wheel and it is used to select between two programmable CPI’s. 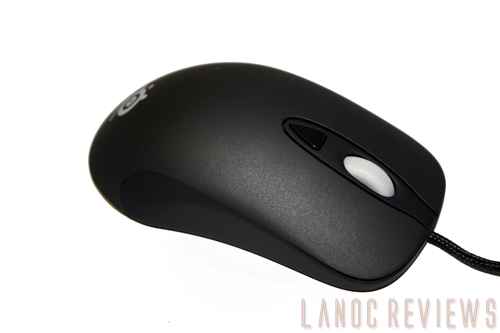 After playing around with the Kinzu while in game, it wasn’t long before I really started to miss having a side button. I never use both of the side buttons included on more expensive mice but not having at least one seems like a major oversight. The Kinzu worked great when I was finally able to get the CPI set the way I wanted it. One of the downsides of the limited adjust-ability in CPI is not being able to fine tune it to what you are used too. I ended up having to use the Windows sensitivity to get the mouse near what I preferred. The small size of the Kinzu also became an issue in game, the small size gave me hand cramps like you wouldn't believe. Passing the Kinzu over to my wife who has much smaller hands she also agreed that the mouse felt too small. The mouse functioned without any problems (ie: no acceleration or deceleration issues, Z-axis tracking issues), but for me it was almost unusable because of its size. 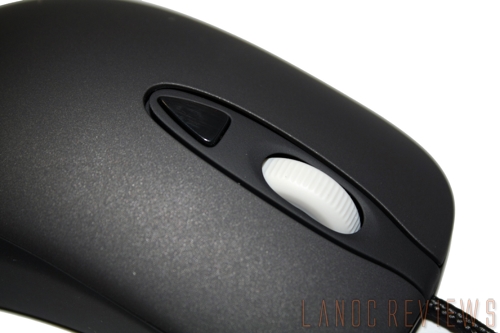 Almost no adjust-ability in the software and no extra buttons make me wonder how Steel Series is marketing the Kinzu to the gaming crowd. Anyone who wasn’t looking for those features would most likely be looking at standard mice from both Logitech and Microsoft which are cheaper and sometimes come with more functionality. The small size of the Kinzu is too small for all but the smallest hands and for the average adult you may even find it uncomfortable. Steel Series may not have been able to pack the Kinzu full of features but the sensor was free of issues and tracked perfectly. It’s just a shame that it wasn’t packed in a better package. 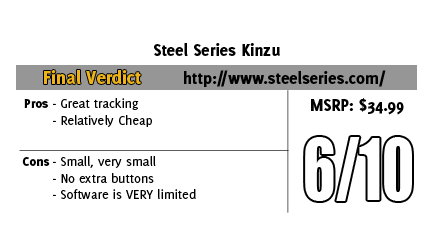 You might call him obsessed or just a hardcore geek. Wes's obsession with gaming hardware and gadgets isn't anything new, he could be found taking things apart even as a child. When not poking around in PC's he can be found playing League of Legends, Awesomenauts, or Civilization 5 or watching a wide variety of TV shows and Movies. A car guy at heart, the same things that draw him into tweaking cars apply when building good looking fast computers. If you are interested in writing for Wes here at LanOC you can reach out to him directly using our contact form.
Discuss this article
Log in to comment
Posts in discussion: Steel Series Kinzu

We have 2211 guests and one member online