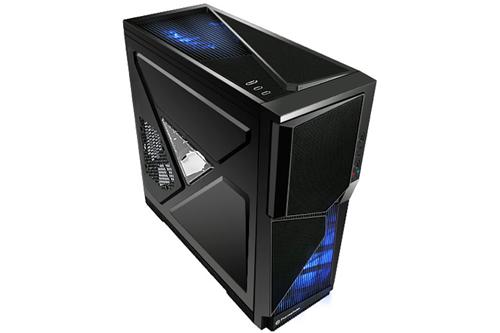 Tired of hiding behind your case, only to find out that bullets penetrate its wimpy aluminum? When competing with friends, do you feel that you lack certain “combat ambiance”? Fret no longer, the Armor A90 can take your rig and turn it into an angry and stylish machine! Kind of like a glowing mechanical bulldog… with a tie. Allow me to explain how that works in this review of the stunning Armor A90 by Thermaltake.

Pictures by: Ethan and Thermaltake(opening photo) 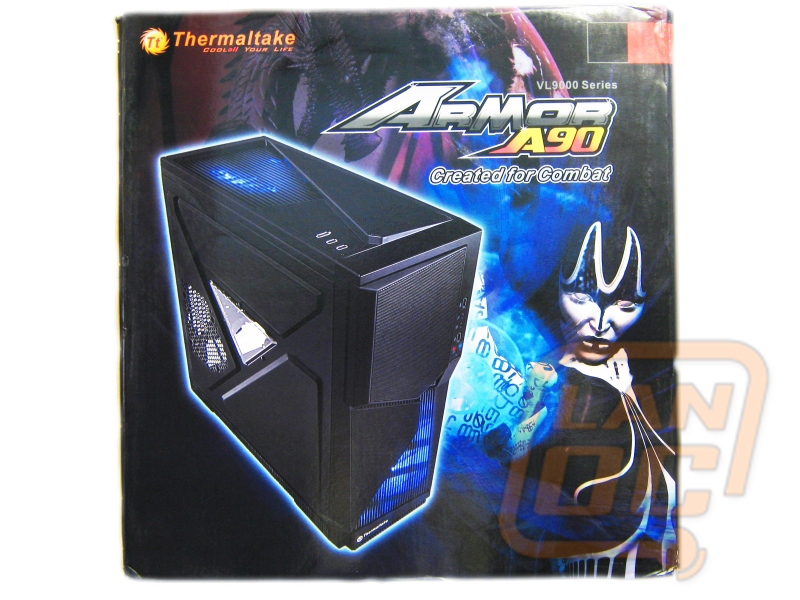 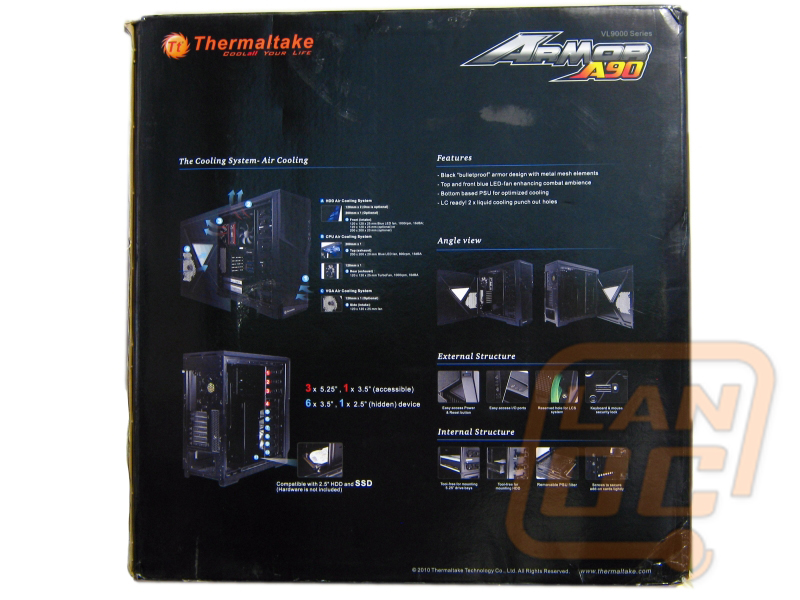 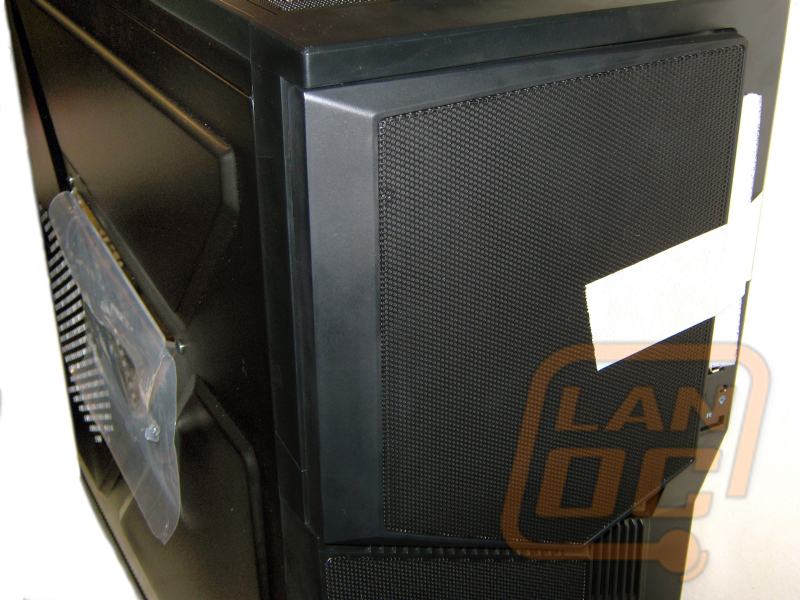 Cardboard boxes aren't something I get particularly excited about, but it has to come in something, right? The front of the box features a picture of the case with some dramatically masked figure presenting it. A clever eye may also spot the dragon lurking in the background. But, wait! That's not just a dragon; it's a Colossal Red Dragon! Somebody in marketing must be a fan of Dungeons & Dragons... Anyways, the right and left sides of the box include another picture of the case and a description of the product, respectively. The back of the box includes a feature listing with several pictures of the open case and close-ups of features. The case inside is protected from scratches and scuffs inside plastic bag, in turn encased in two slabs of Styrofoam. Pretty standard, plastic bag is still a good consideration. A strip of foam was placed inside the front panel drive-bay door and taped closed, presumably to keep the thing from swinging open and closed. Additionally, a piece of clingy plastic was placed over the window to protect it. 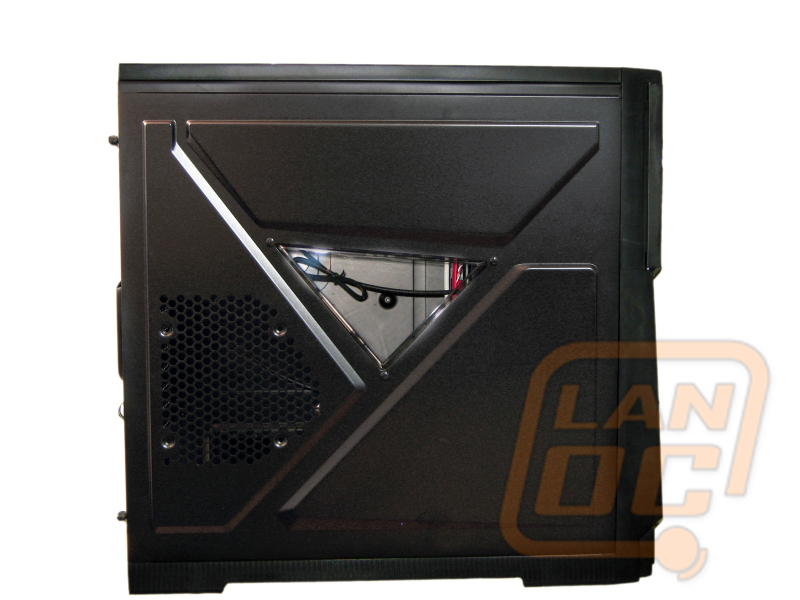 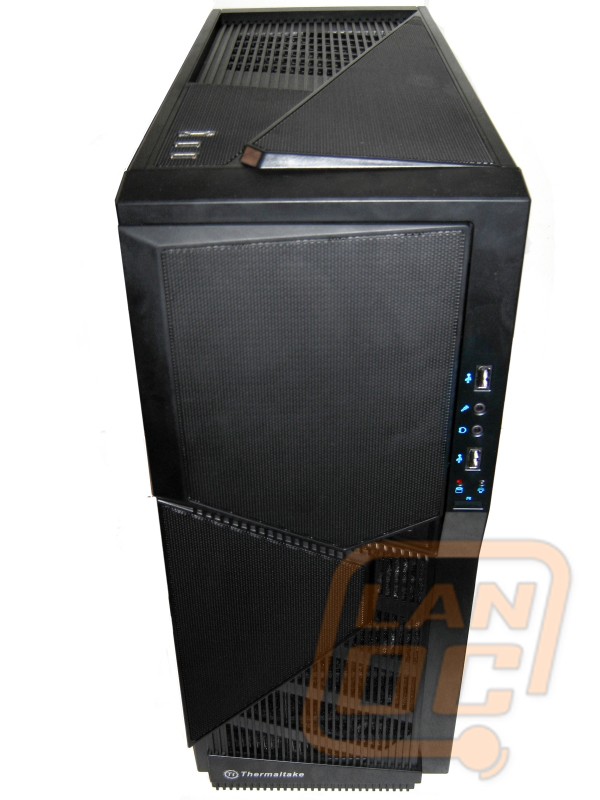 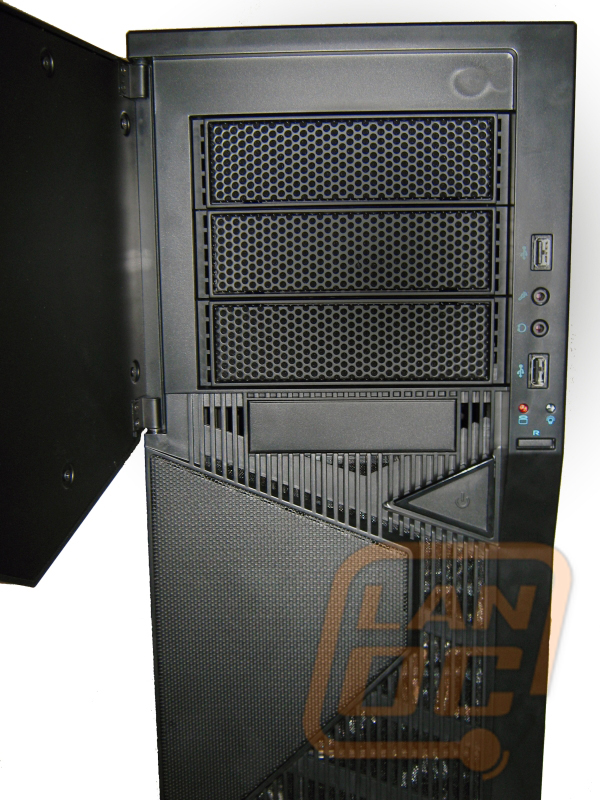 As listed on the box of the Thermaltake Armor A90:

Firstly, I didn’t know “armor design” was a feature and that blue LED’s had an accompanying magical synergy with “combat ambiance”. Secondly, it seems only the last two are actually features. It’s not that there is a shortage of cool things about this case; it’s just that they aren’t listed. I guess that’s where I come in…

Exterior
In all honesty, the case is very attractive and a joy to look at when it has been used to house a proper rig. The subtly aggressive angles of the case make it quietly intimidating, beautifully coupled with its black interior and exterior paint. Snuck in with the “bulletproof’ armor design” is a triangular window on the left panel. It is fairly small, but, unless your goal is to show-off your motherboard instead of gaming on it, the window provides an intriguing peak into your case and I smile upon its addition.
The front of the case displays a black mesh and magnetic swinging door covering the drive bays, which all have filtered covers allowing for air to freely enter the case through the bays… if the door weren’t in the way. Thermaltake, what’s the point? At least the drive bay covers match the case. Next to the door are your typical connectors, 2xUSB, 1xMic, and 1xSpeaker. Under these connectors is the small rectangular reset button; no fear of accidentally pushing this button, but it’s not difficult for intentional activation, either. What does worry me is the position of the power button, right under and to the right of the drive bay door: where a typical hand might reach to open the door. This is a serious design flaw, in my opinion. How unfortunate would it be to get excited about installing a game only to have your hand slip when opening the door and turn off your computer? Perhaps you can smash your hand upon the gorgeous black mesh on top of your case, narrowly dodging your other 2xUSB ports and 1xeSATA port.
Swing open the side of the case and... hold the phone, are those black thumbscrews used for securing the side panel? Fist pump! Yes, the little things get to me, but recall how I also said “swing open” the panel? I meant it! The side panels (both of them) swing open like doors towards the front of the case. No more fiddling around with those funny slide-in locks; those are for cheapie cases! Also seen from the back of the case is a hoop for a padlock to protect your panel from unwanted intruders and a hoop secured inside the case by a thumbscrew to put cables of expensive peripherals through; good additions to any machine being taken to an unfamiliar LAN party. You’ll also find some pre-cut holes for a liquid cooling set-up on the back of the case.
The Armor A90 supports a bottom-mounted power supply, and even a removable filter on the bottom of the case. While this “filter” may differ from illustrations in the manual, it is still functional, none-the-less. It is somewhat removable and is little more than a metal mesh, but it will keep the worst of dust bunnies and dead bugs out of your power supply. 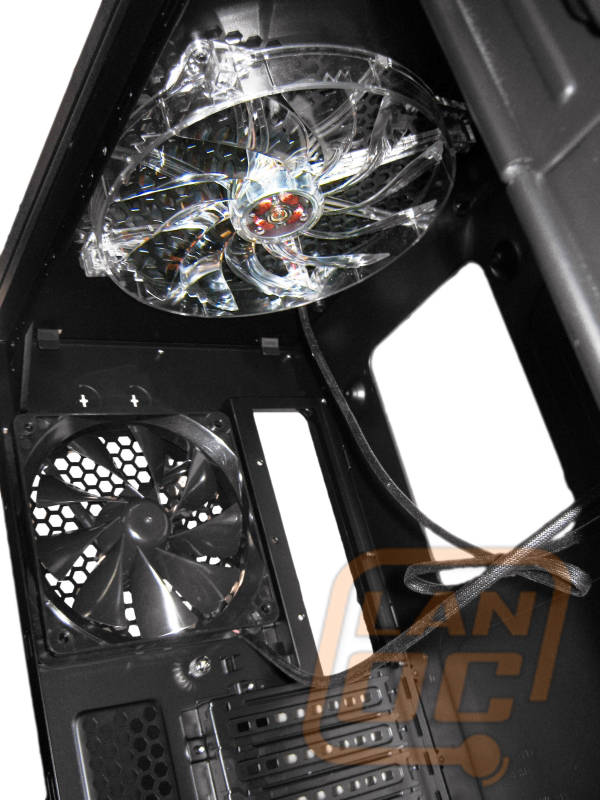 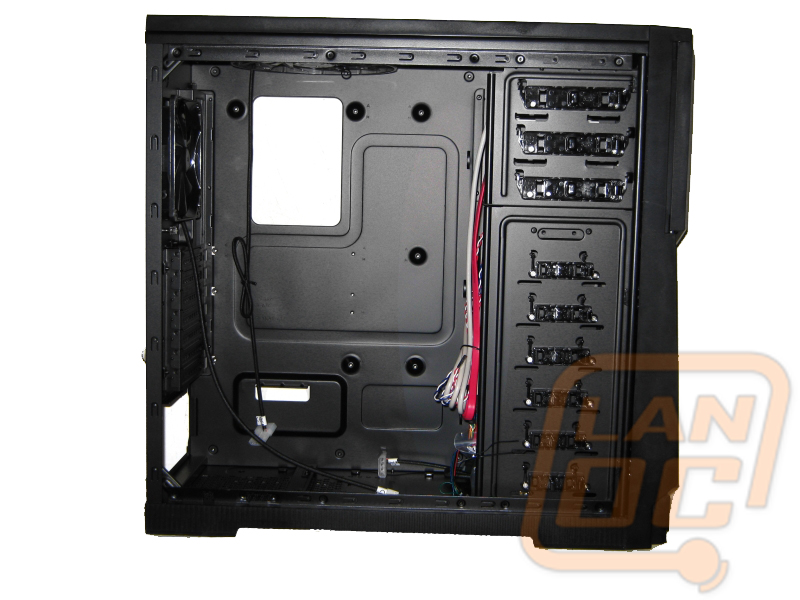 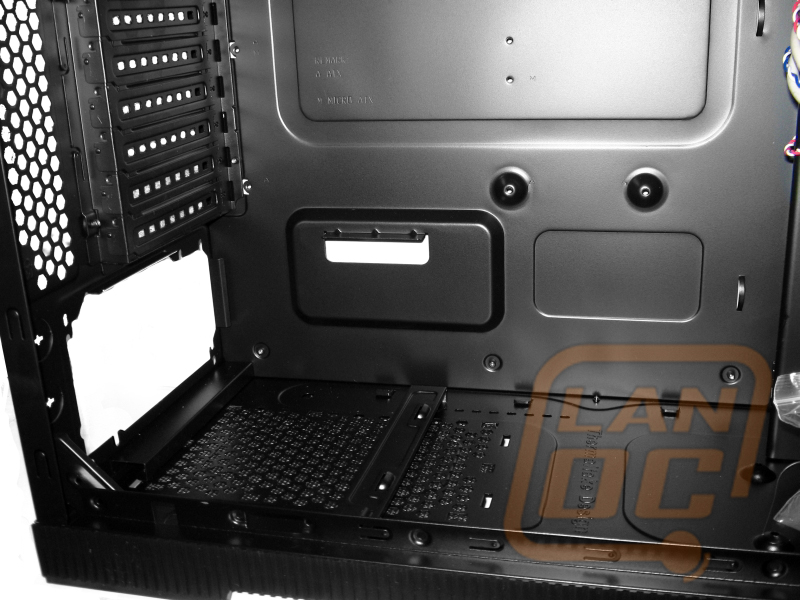 Interior
Upon opening the case (with ease, I might add), you’ll be greeted with the black interior of the Armor A90. Thankfully, there is a CPU cutout for installing heat sinks and even more subtle, is the folded edges inside of the case.
All seven 3.5” drive bays (as well as the three 5.25”) include a very secure tool-free mechanism for installing HDDs. The features do mention support for a SSD, but I do not own one and will give the benefit of the doubt to Thermaltake that it works. While these bays may not be rotated, as most cases now feature, this does provide for lots of extra room on the opposite side for cable management. Along with this magical cubby, the case has a few loops for affixing cables to, with twisty-ties (or whatever you prefer).
The Armor A90 comes with 3 fans, 1x120mm front intake, 1x120mm rear exhaust, and 1x200mm top exhaust. The side panel already is capable of hosting a 120mm fan for intake, but you can even add another 120mm to the front, having 2x120mm for front intake. Or, you can swap both of them out and have a 200mm fan pull in that cooling goodness. To protect that monstrous power from the bad-guys, a removable air-filter is included behind the front panel. 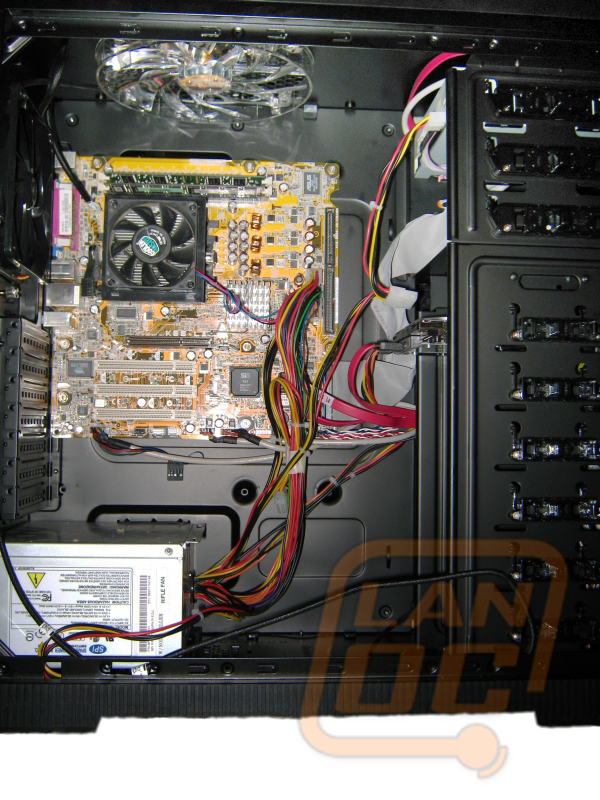 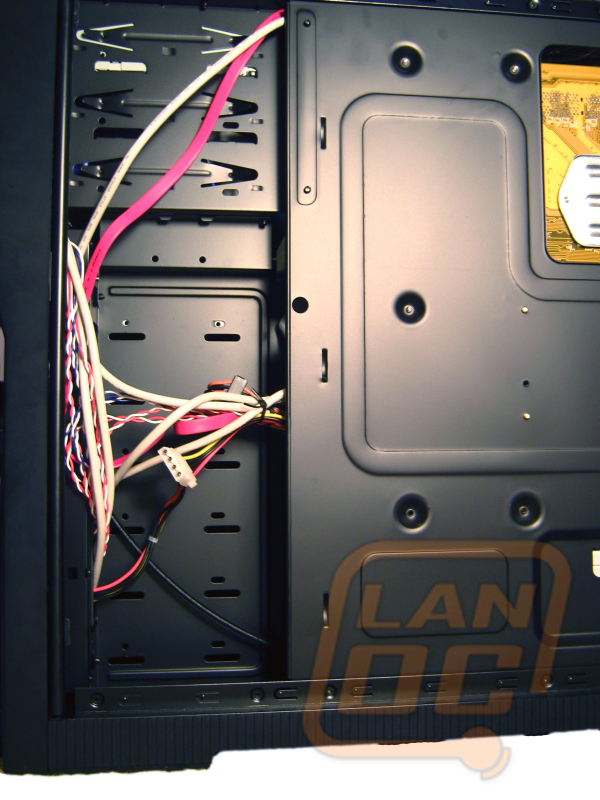 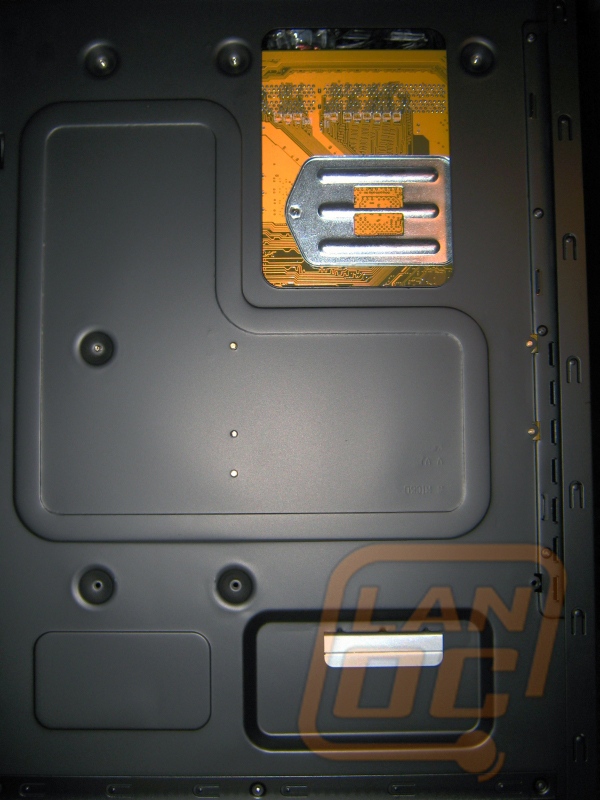 I placed my PSU at the bottom of the case and adjusted the support rail accordingly by unscrewing it from the bottom, sliding it back, and screwing it back in. I had to fight a bit to get the screws to fit back into the rail, but it was very snug. The inside of the case had marks by the holes for motherboard installation, indicating either µATX, ATX, or both. After installing the motherboard, though, I noticed that the mounting plate for my heatsink was partly hidden from the CPU cutout.
My favorite part of the entire installation was the 5.25” and 3.5” drive bays. Pulling off the front panel to install the DVD drive wasn’t particularly notable, but the USB and audio ports were attached to the case itself, instead of the front panel. I needn’t worry about pulling the front panel off too hard for fear of ripping out any cables. Sliding in my DVD drive and HDD was simple, and I was confident that the spring-like mechanism for holding them in place would hold.
By this time, I also had a massive amount of cabling lying around inside the case and, thanks to the black paint; I had left several fingerprints behind as well. I bust out a few twisty ties and went to work. The amount of space behind the HDD bay was helpful and I was fortunate enough to fit most of my extra cabling there.
It became very obvious that the computer was running after I turned it on, not because it was noisy, but because the blue LED on the front panel lit up like a neutron star. Perhaps I was sitting too close to the front of the case, perhaps I had been doing ecstasy earlier that day, and perhaps I was staring right into it…but it was still pretty bright. I then realized that I was taken away by the combat ambiance of the Armor A90. The front was glowing blue; the top was glowing blue; the side was glowing blue; all through sexy black mesh, indirectly lighting the “bulletproof” angles of the case. After I snapped back to reality (oh, there goes gravity), I also noticed that the fans were barely audible over the gargling of drool coming out of my mouth. 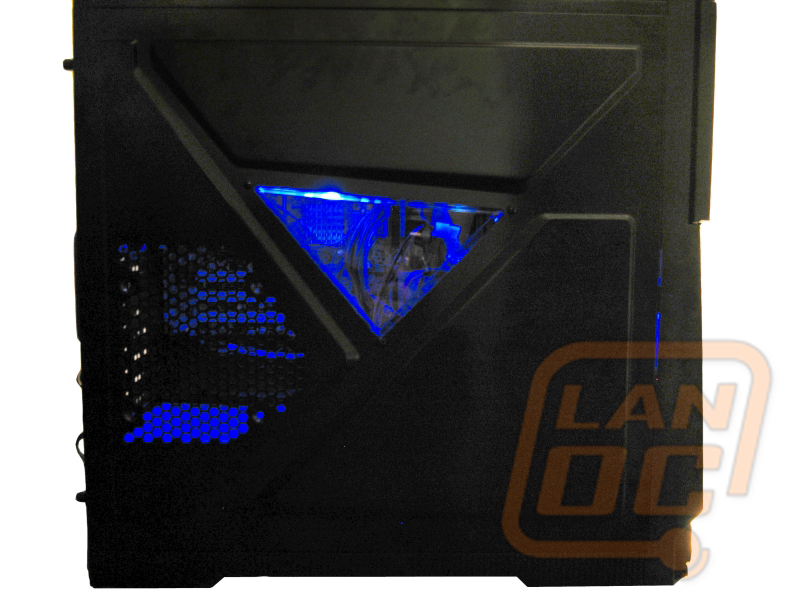 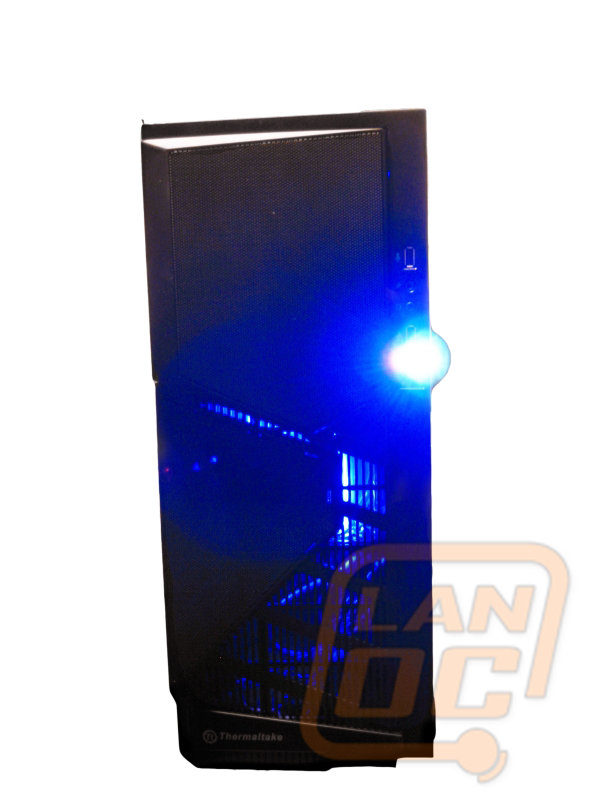 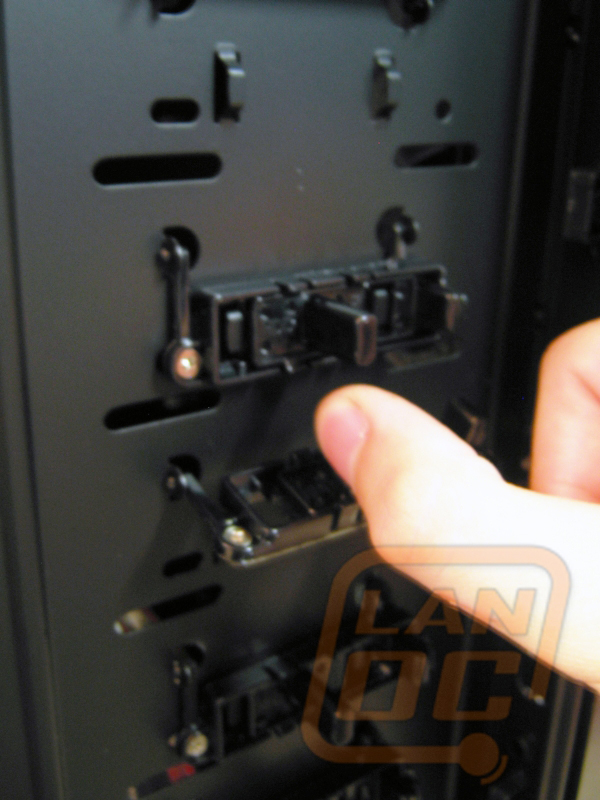 For $99, this mid-tower has a lot to offer; an aggressive and stylish design, room for more fans, and it's relatively spacious. It was pretty nice to see that Thermaltake included an eSATA port, which will probably make a cheap alternative to a hot-swap slot in a less expensive case like this. What wasn’t nice to see were my fingerprints on and inside of the case. Although, with that svelte window you probably won’t be able to see much of the inside without getting too close. I won’t consider that detrimentally, though, because I think the window looks great, without getting too obnoxious. What I definitely didn’t like was the placement of the power button (and the following placement of your fist in somebody’s gut if they accidentally press it), and the “filter” for the power supply. 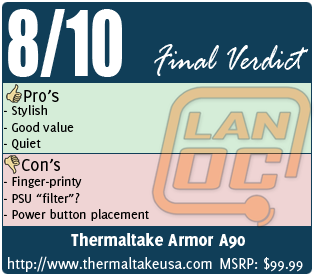 We have 1595 guests and no members online