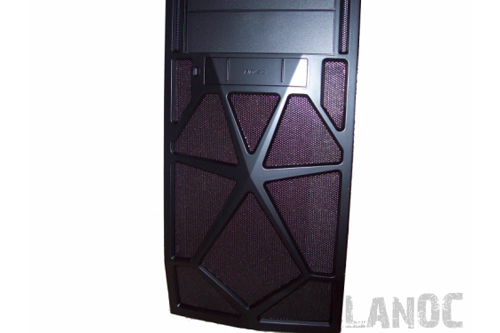 PC gaming is unarguably making a rise in the gaming industry. It can be daunting, even for a veteran, with the endless slew of products and options available on the marker. At times, it can be hard to keep up with what you need and what you don't, and there have been plenty out there willing to take advantage of that confusion. Luckily, there are companies out there who refuse to, who remain committed to giving the PC gamer exactly what they want and need. Antec is such a company, and they've sent us their most affordable gaming mid-tower yet, the Antec Two Hundred, to prove it.

Packaging
Antec makes little effort to hide the fact that the factory box is your average cardboard material, using the natural brown color as the main background hue. Orange bars line the corners and add a little color to spice up its appearance, accompanyied by images of the case itself and a few specifications. If it helps to cut down costs to the consumer, I'd take packaging such as this over a gaudy facade anyday. The important thing is that the cardboard is of a reinforced nature, so it'll do its job keeping the product inside. The exterior is then aided by two large pieces of styrofoam on either end of the tower, extending past the case's height and width to completely cushion all edges. The tower itself is then plastic wrapped to fight dust and other environment baddies, so this case will be fresh on the day of its arrival. 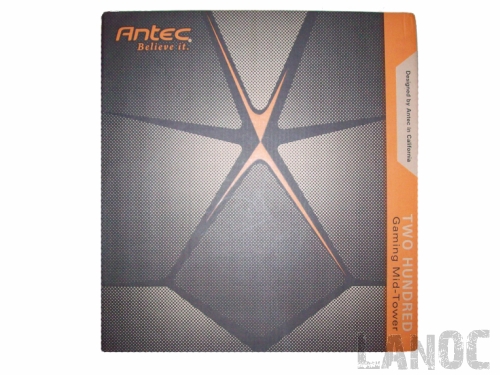 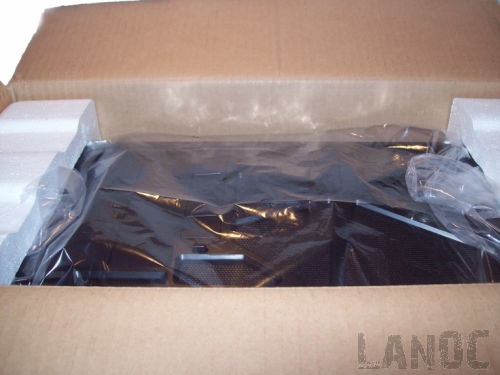 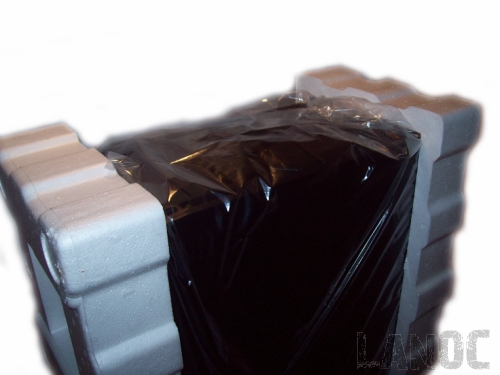 All the goodies are stored inside of the case itself, accessible by means of removing two thumb screws and the main side panel. You'll find a bag with instructions (though this is just an overview, Antec's bulk manual is online to help reduce paper waste), a smaller bag filled with miscellenous hardware (motherboard risers, mounting screws, etc.), and the I/O panel. Doing so also gives you a great look into what exactly you'll be working with. The first thing that should catch your eye is a built-in hard drive hot-swap caddy, situated just above the other 3.5" drive bays, an awesome and very useful addition. 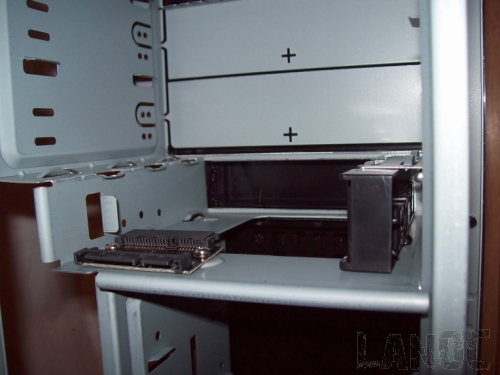 The case is finished with an almost matte effect, but Antec has provided a texture in the paint as well, helping the user to get a grip. It also helps cut down the amount of fingerprints and smudges left from the touch, but some still persist through. The case itself is fairly light, with a net weight of 13.9 lbs and a gross of 16.8 lbs, and at dimension of 17.7"x7.9"x18.5", it isn't a burden to carry at all. It's portability adds greatly to the value of the 200's gaming aspect, since it will probably be hauled to and from LAN party after LAN party. After installing hardware, moving it here and there and back again many, many times, there is nothing to indicated that this case will have any problems standing up to the challenge.

As with any tower, it isn't so much installation of the chassis itself as it is the ease of access for the hardware that it will house. I began with the motherboard installation, a fairly painless task given Antec has already installed motherboard risers in the most common screw areas and lined up perfectly in my case. The motherboard tray does feature a nice CPU cutout, just large enough to keep the reverse side of the heatsink/CPU accessible from the back. This is a great feature, not only because it helps with airflow but it also prevents the user from having to remove the motherboard if the CPU and/or cooler needs replaced. 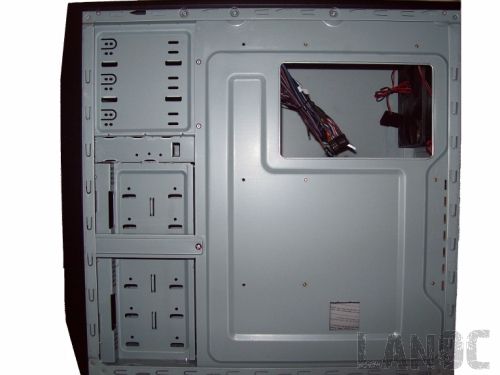 The power supply sits directly below the motherboard with only an inch or so between the two pieces. The unit sits on two rubbered pegs in the back and two elevated rungs in the front to allow for some airflow underneath; though there is not ventilation holes on the bottom of the case, meaning PSU's with bottom mounted fans will need to be mounted upside down. The stock fans have been mostly designed to pump air out of the system, with a 140mm top fan, a 120mm rear fan, an optional 120mm fan on the side. and two optional 120mm fans that mount on a swinging door behind the design on the front of the tower. Those optional fans allow for some customization, and truly look sharp with some LED or UV fans accentuating Antec's design. The side fan is great for cooling down any video cards, situated in a prime area for heat removal. The two optional 120mm fans in the front are the only to feature a padding between the fans on the exterior, so some noise reduction and filteration are provided. Otherwise, the potential for dust is again a threat that may need to be dealt with. 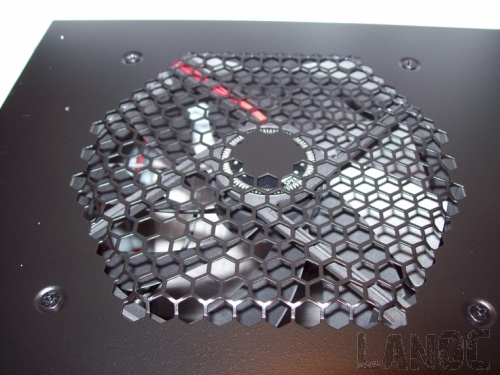 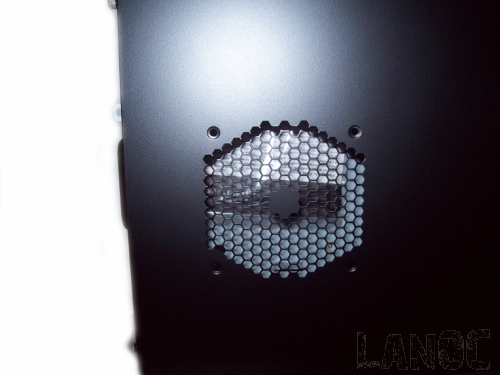 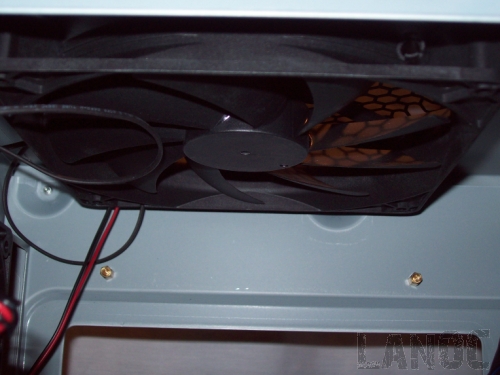 To install these optional fans, the front actually pops off, revealing a plactic slotted swinging door, with screw holes on opposite corners to mount the fans. This door can be aggravating at times, given that its not on a full hinge, and anywhere past the half way open mark the door comes apart from the case. This is useful for installing the fans, but when putting it back together, trying to manage the cords and positioning the door just right can be a handful. The end result, however, is worth this minor frustration. 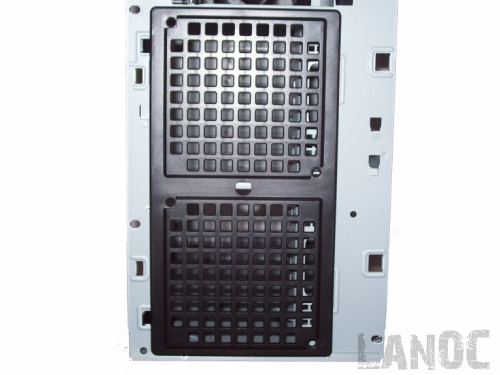 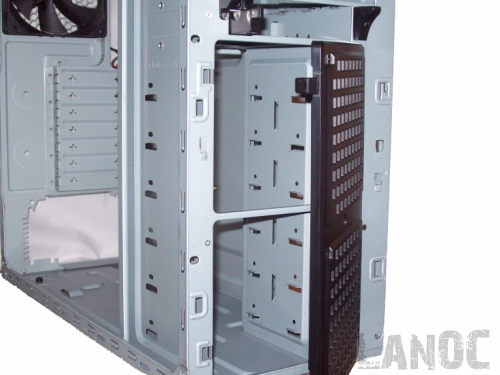 The PCI slots and expansion bays are sealed with a weak metal placeholder for unused ports that simply break out when ready for use. The video card fits onto the board and into the slot without any problems, though you may have some space issues if you have a larger model or SLI/Crossfire for that matter. Again, it is important to keep in mind that we're dealing with a mid-tower here.

The drive bays feature no tricks or gadgets for toolless installation, just old school mounting screws. To secure both sides of the drive, you'll need to remove both panels of the tower to access the holes, all of which have additional holes to accomidate drives of all shapes and sizes. In the hard drive cage, a normal 3.5" drive will extend out into open case by about an inch, which helps a little with airflow but again takes up more room of an already tight mid-tower. With not much room in between drive racks, a potential problem with multiple hard drives is definetly present.

Cable management is going to take some patience in the 200 as well. With no gap between the reverse side of the motherboard tray and the rear panel, theres not a lot of places to hide cords. Included wires are tied down, and major cables running from the front I/O panel are clipped to the top, but anything else it entirely up to you. Antec has included two hefty wire ties to aid in the battle, but you may find yourself needing more. The is a small cove between the hard drive cage and the backside panel where excess length can be directed, but just about everywhere else present a danger of fans too close to cables. Your best bet may be to tie folded cable length together to keep that extra length from shifting into fans during movement and to help get the bulk out of the way of airflow.

As mentioned, even when hardware is installed the Antec 200 is a very portable case. With a total of ten drive bays, six of which are HDDs, it'll take quite a bit to find yourself reaching the limit of this case. You'll probably want to install fans in the optional side graphics panel and front hard drive bay areas, and after doing so air flow shouldn't be much of an issue. The trade-off for this is going to be noise; try as Antec may, the thin sides and abesence of sound-reducing material aside from the front panel aren't able to hold back much of the noise of operation. Though the 200 does feature a cable management compartment, you may still want to cable ties some cords together to help with circulation. The Antec 200 is not only a very practible gaming case, but it also has great potential for modding, from simple LED fans and glow lights to any sort of theme you may imagine. Both sides and top of the case are a flat, level surface, and the front grill design can compliment any project nicely, though if you find yourself wanting to go all custom, its very easy to remove.

Overall
A stylish, quality gaming case with plenty of room to expand, intuitive extra features (such as the installed hot-swap caddy), and portability, the Antec 200 truly helps to get the most out of your money. The only flaw is the case's inability to reduce much of the hardware's operating noise, and depending on preference this may be no issue or a huge one. Though it should be obvious to anyone that the perks of this enclosure far outweight the downside. With a total of five fans, two USB 2.0 on the front panel, ten drive bays, and seven expansion slots, Antec put it best when they said 'the Two Hundred's got it all.' No arguments here. 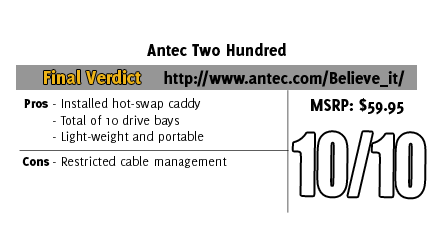 Author: Lersar
Contributing Editor / Event Staff
Adam is a big proponent of LAN parties, esports and speed-running, and helps organize our semi-annual LAN events. He has covered hardware and software reviews of a wide variety, but most content these days come from event coverage, such as other LAN parties.
Discuss this article
Log in to comment
Posts in discussion: Antec Two Hundred

We have 1017 guests and no members online