Antec has been slowly refining their case lineup one at a time. We haven't really seen a lot of completely new designs from them this year, this has a lot to do with the state of the economy. With the P180 series of cases Antec has always had a strong focus on the noise performance of their cases. Of course as we have learned in the past, quite can sometimes mean hot. In order to fix some of those issues they have released the P183. We are going to take a look at the changes along with the overall usability of the P183 as a gaming and HTPC chassis. 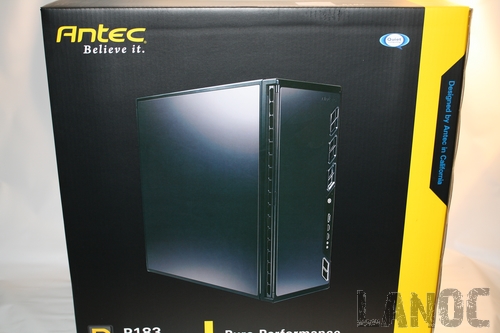 The P183 showed up in typical Antec packaging. Black and yellow with picture of the case almost popping off of the front of the box. The back of the box has a full specification listing in multiple languages. The sides are uneventful other than a short list of features along with a picture of the interior of the case. Opening the box up I was surprised to find the case itself wrapped in cardboard on top of the normal Styrofoam padding. To top it all off, the case was even protected from the Styrofoam with a thin cardboard. Once I removed the layers or protection I found the entire case had a protective plastic film on it also. If anyone ever receives a P183 that has even a scratch on it, I would be highly surprised. 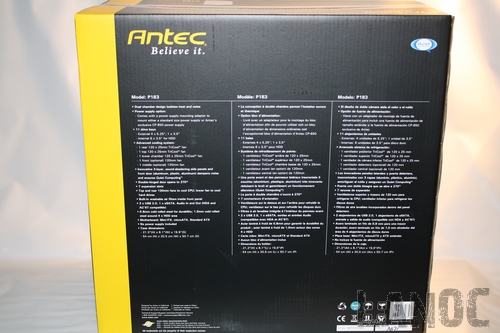 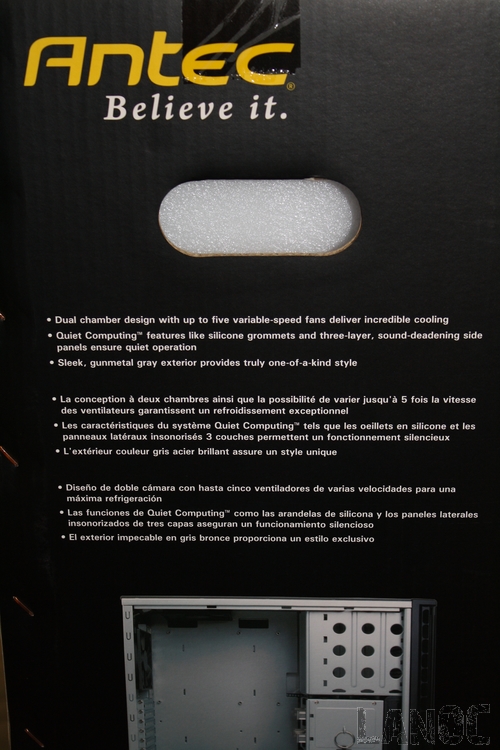 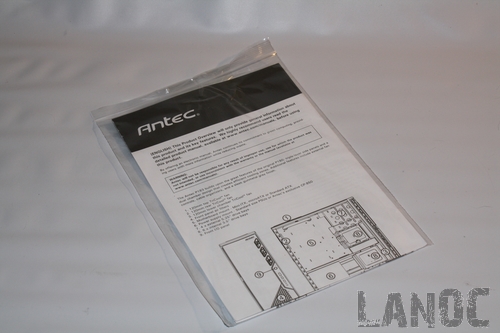 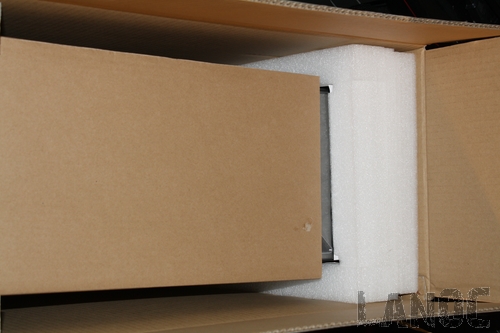 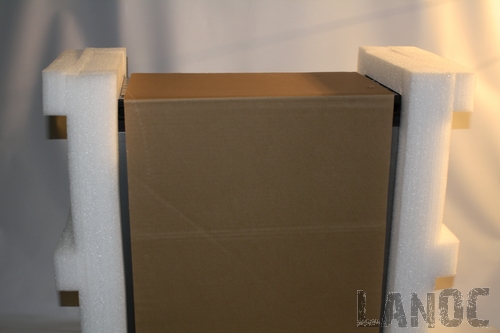 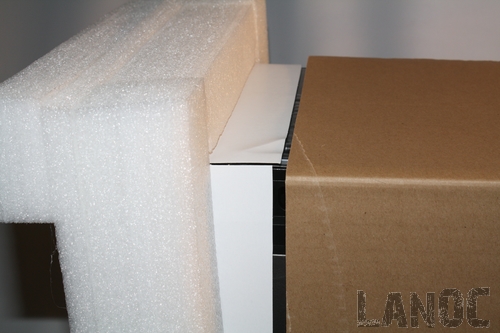 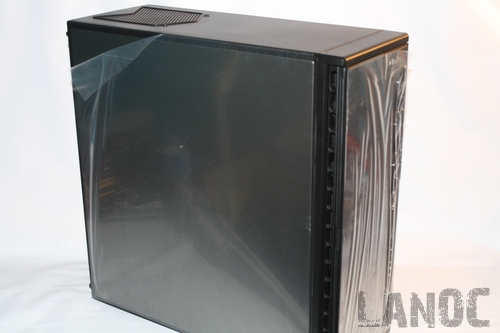 If you have seen previous versions of the P180 series, the p183 is very similar with only a few changes. The dark silver finish is a color you don't see in cases very often, but with a front door panel covering up the disc drives you can do almost any color. The arrow shaped grill on top of the case hides a 120mm fan. Both side panels are fairly uneventful with no fan grills or windows. One thing that stands out with the P183 is the use of plastic on the side, front, and top panels to keep sound down. 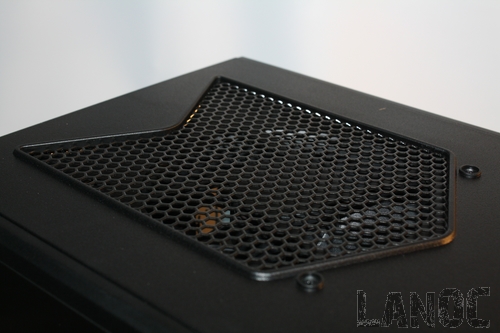 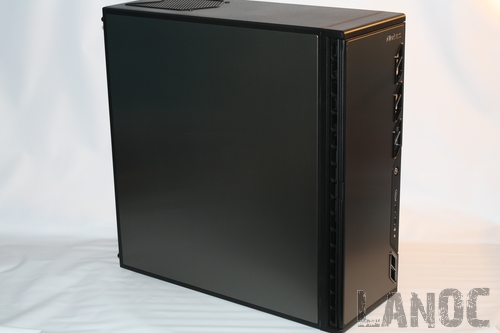 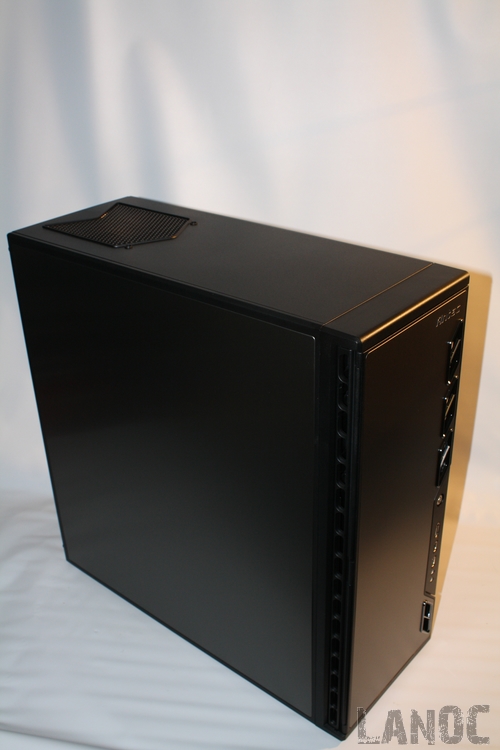 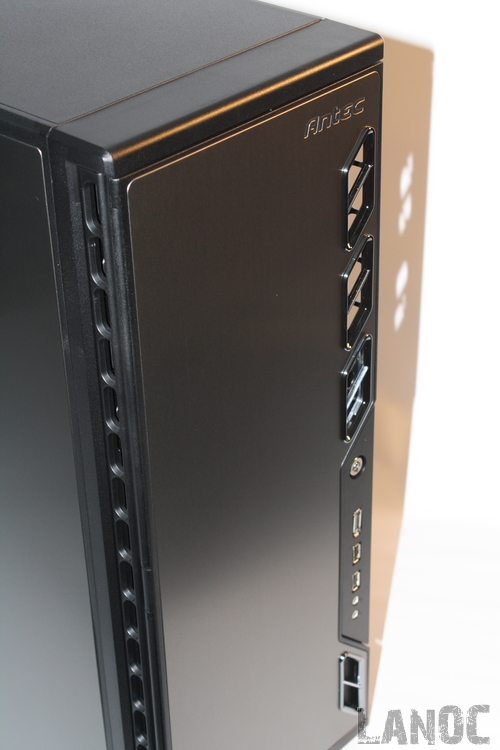 The front panel is where most of the action is. The front houses the I/O panel where you will find two USB ports, both Microphone and Headphone ports, an eSATA port and a door lock. In order to find both the power and reset buttons you have to open the front door, I would have been nice to have better access to them with the door closed. To keep things cool when the door is closed Antec has placed vents in the door for air flow along with vents on each side behind the door. When the door is opened the case transforms into a high air flow design with vents from top to bottom. After dealing with the hard to access filters on the twelve hundred and nine hundred I was worried that the filters would be hard to access once again. With the push of a button, I quickly found out that won't be the case. The entire front mesh can be removed/opened by pushing a button or pulling on a clip for easy filter cleaning. 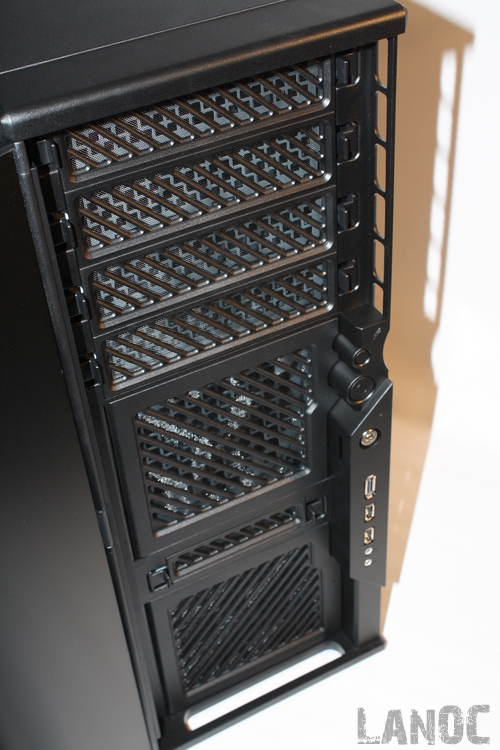 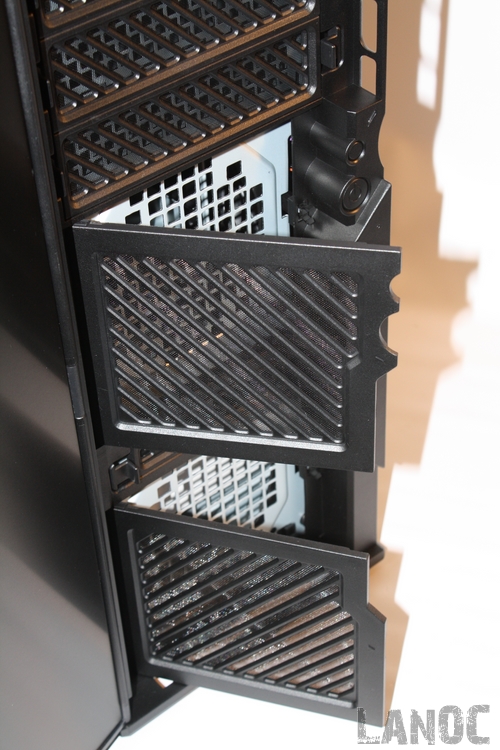 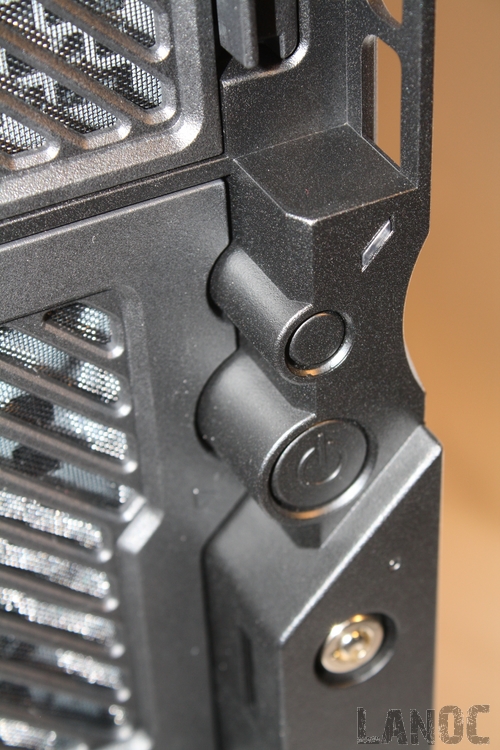 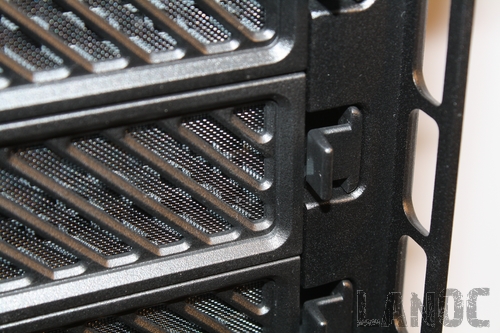 Lastly looking at the back of the case a few things stand out. First, you will find another 120mm fan to pull the hot air away from the CPU. Antec has included 7 PCI slots for those who will be packing this case full of PCI cards. The power supply is mounted on the bottom and you will notice they included the ability to run Antec's exclusive CP series of larger power supplies. Up at the top you will find a small set of switches similar to the switches we saw on the 900 and 1200 to control the fans. 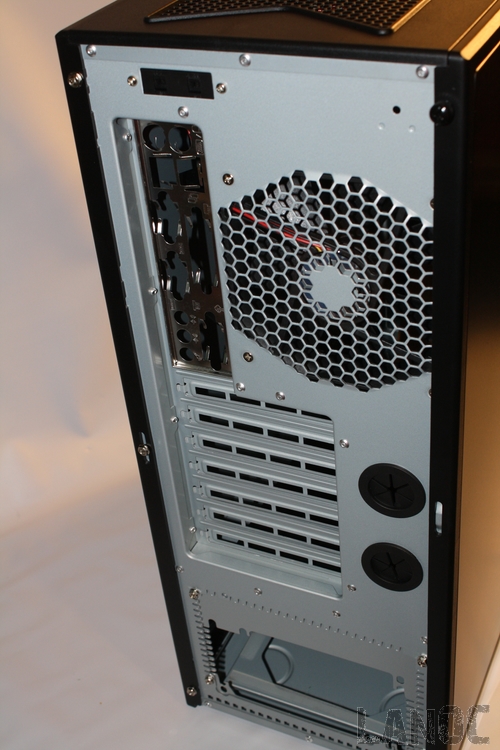 Peeking inside the case it's hard to overlook how compartmentalized the case is. The bottom half of the case houses the power supply and four hard drives if you need the space. In the top compartment you can find four 5 1/4 drive bays up top. Below them Antec has mounted another hard drive cage, this cage only has two slide out trays for easy removal if needed. Keeping the two compartments apart is a metal divider with an access hole for cabling. One of the details that stood out to me is the padding on the edge of the divider to prevent it from rattling against the door panel. Small details like this can make or break a case. 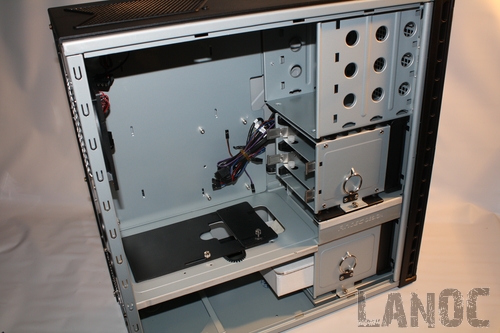 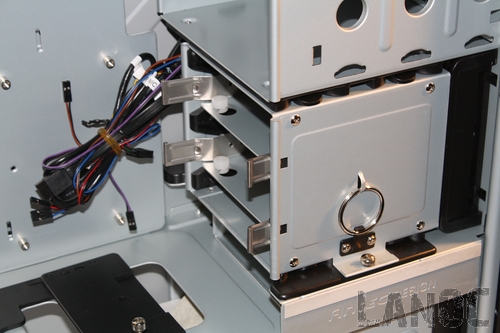 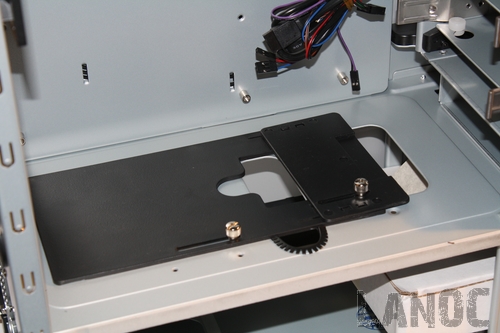 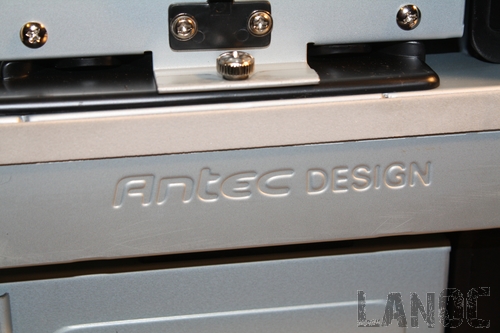 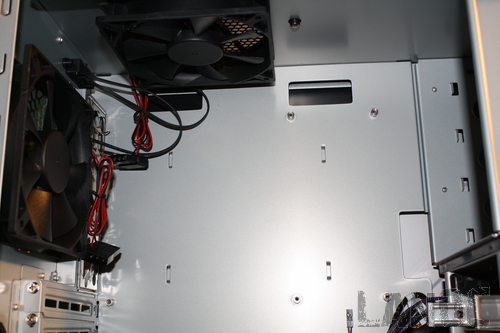 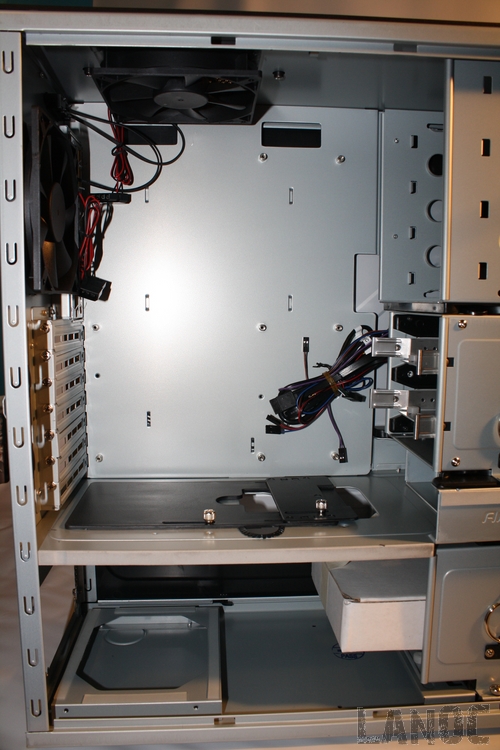 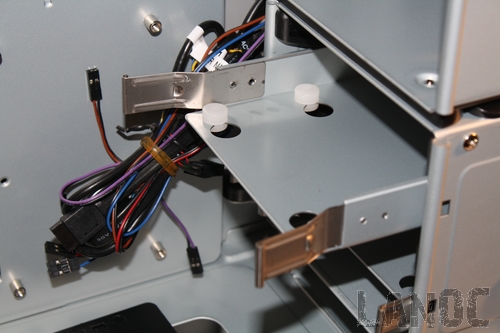 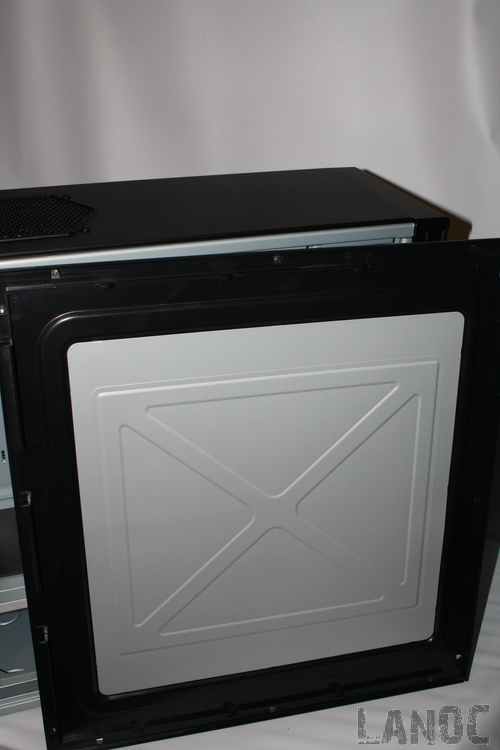 Installing my HTPC into the P183 gave me déjà Vu, as it turns out the Fusion Remote Max that I reviewed at the end of last year is based on this chassis. Because of that, I knew what to expect with the two-chamber design. Installing the motherboard went without any hiccups. When it came to installing the disc drive I was surprised to figure out that they install and remove the drive from the front of the case. The reason this was a surprise to me is the black front and black disc drive will make the silver brackets stand out, although it does make it very easy to work with. The P183 was missing an access hole for the back of the CPU, If you decide to change your cooler in the future you will have to pull out your motherboard to install a backplate. The wire management of the P183 is a step above cases from the past, but after working with some of the gaming cases recently It would be nice to see a little more room between the motherboard tray and the right side door. Performance Once everything was together and running I hooked up the Microsoft Entertainment 7000 that I reviewed yesterday and kicked back and watched a few movies. One of my main concerns with using the p183 as an HTPC was noise. In the past my Xbox 360 and other DVD players put out enough noise to notice them over top of my movie playing. The P183 is designed specifically to keep the noise level down. Even with my sound turned off I wasn't able to hear any vibration or noise coming from the disc drive or hard drive. The CPU cooler and power supply also were unheard. I did notice that the top fan was noticeable when running on its high setting. This is where the fan controller comes in handy, a flip of the switch and the noise went away. If Antec decides to revise the P183 in the future I think a larger lower speed fan would be a better pick. 120mm fans are still large, but 200mm+ fans are becoming popular when trying to keep noise down without sacrificing air flow.  And speaking off that, the dual chamber design along with the two 120mm fans did a good job of keeping the air moving and the computer cool. If it doesn't you always have the option to add two more to the front. 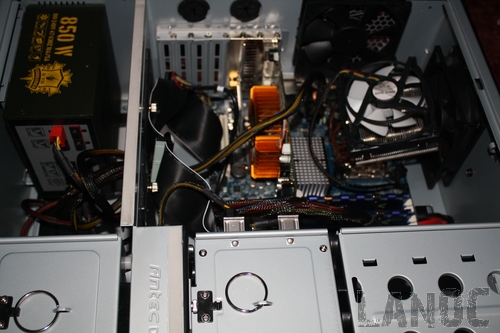 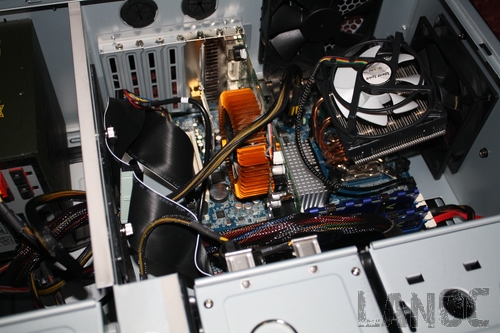 Antec set out to improve on the already popular P180 series with the P183. The focused on increasing the air flow in and out of the case along with adding fans to keep things free of dust on the inside. Although I don't have an earlier version to compare the P183 too, I can attest to the airflow and low noise levels that have made the P180 series so popular. The P183 would be a great choice for almost any rig from gaming, HTPC, or as something simple for a client. The P183 outperforms most of the competition without being flashy or overdone and It's because of that versatility that makes this an amazing case. 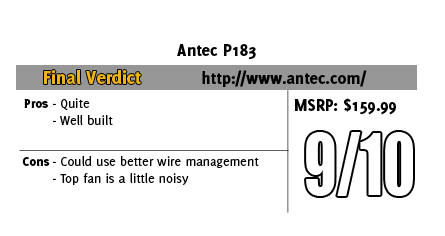 You might call him obsessed or just a hardcore geek. Wes's obsession with gaming hardware and gadgets isn't anything new, he could be found taking things apart even as a child. When not poking around in PC's he can be found playing League of Legends, Awesomenauts, or Civilization 5 or watching a wide variety of TV shows and Movies. A car guy at heart, the same things that draw him into tweaking cars apply when building good looking fast computers. If you are interested in writing for Wes here at LanOC you can reach out to him directly using our contact form.
Discuss this article
Log in to comment
Posts in discussion: Antec P183