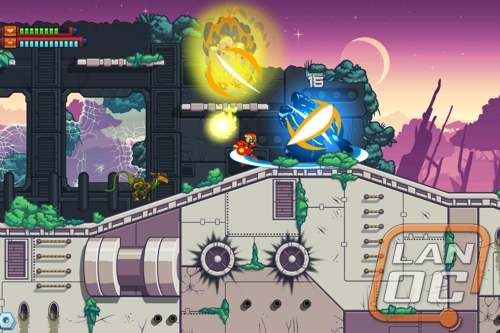 I got my hands on a key for 20XX a week or so before the demo was released for Mighty No. 9, and I remember when it was announced somewhat shrugging, and starting a new run in the formerly mentioned title. The similarities between the two are obvious, not only in their influence from the Mega Man franchise but also that they are both in this weird, pre-release stage that so many games find themselves in. I’m still very much looking forward to a modern day Mega Man from the original development team, but 20XX has managed to scratch an itch that has otherwise been delayed.

I want to avoid comparing the two titles too much. While they may be close in terms of development they’ve been introduced to us in two very different ways. 20XX is currently available on Steam for purchase as early access in a state defined as “nearly feature complete”. Reading through the Q and A on the store page gives the impression all that’s left is some polish, though what’s still to come is a bit vague. If what Batterystaple Games says is taken to heart, the early access is merely a way to collect player feedback as they integrate new features, and give you a little discount for your trouble. A market scorned by this model should be sceptical at this point, but that doesn’t make every early access game a bust. One of Steam’s leading titles, ARK: Survival Evolved, uses this model and has done it extremely well, even winning over one of our staff members who had sworn off early access games.

The Mega Man influence is almost immediately too obvious with a pair of protagonists, one blue and wielding a buster cannon and one red wielding a saber. Nina (the X-inspired buster runner), however, is female although it wasn’t entirely clear until I saw her name. Whether intentional or not, it reminded me of the arguments over Zero’s gender… at least until the voice acting in X4. Nina was a foreshadow for all the subtle differences that sets 20XX apart. 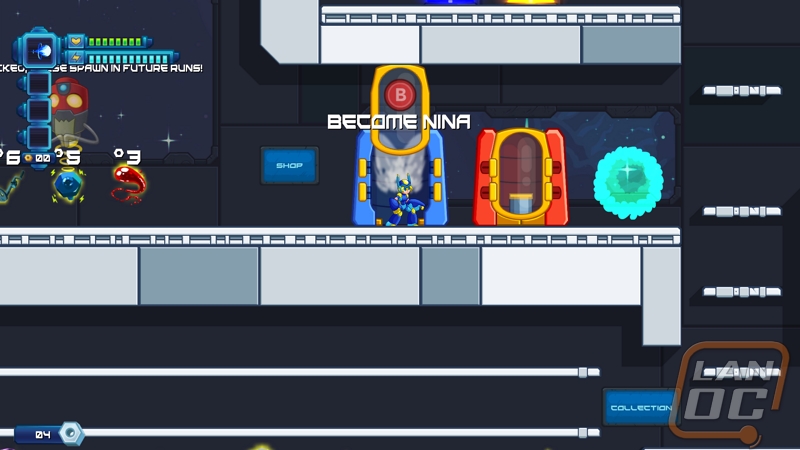 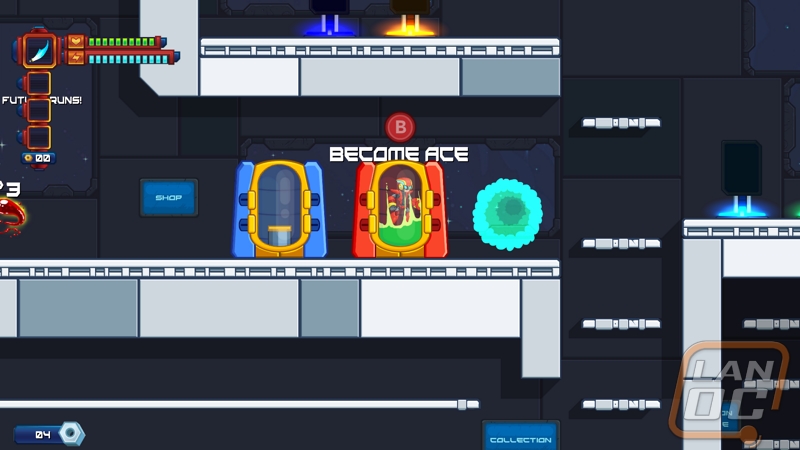 For example, stages change depending on what point you’re visiting them (I’ll explain more shortly), and boss difficulty also scales. You have the opportunity to pick up a boss power for your weapon after defeating them, but it is one of three options. You could choose instead to increase your maximum health, or increase non-skill weapon damage for example. You can also only carry a set amount of weapon skills (each bound to a different button instead of rotating through), so you’ll either pick and choose or swap for something new. 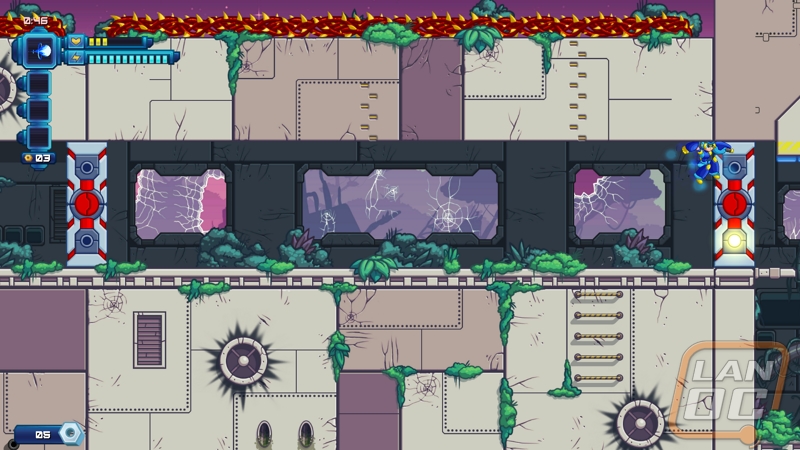 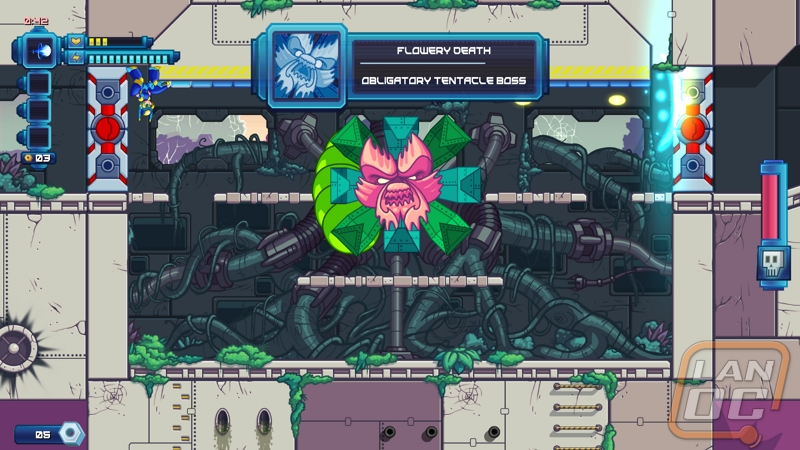 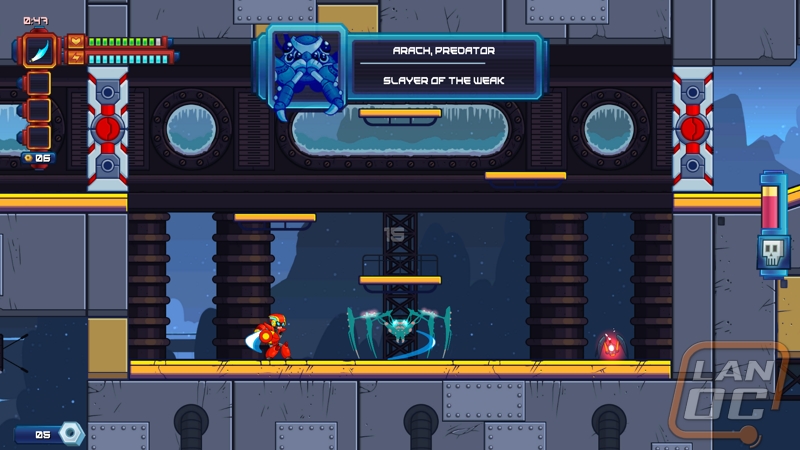 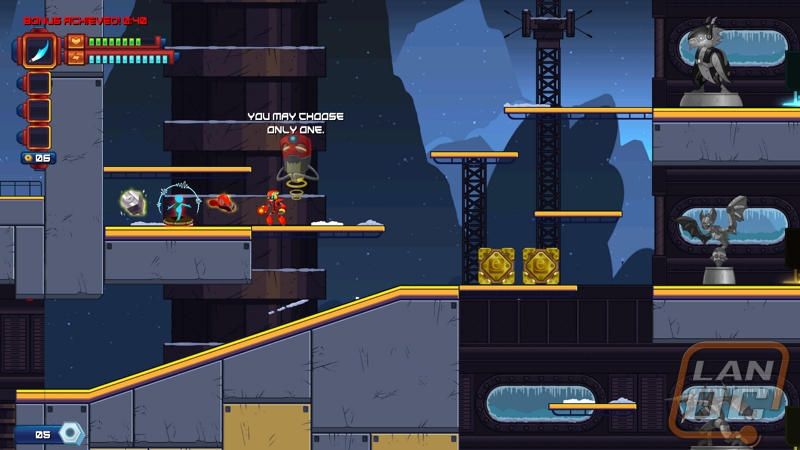 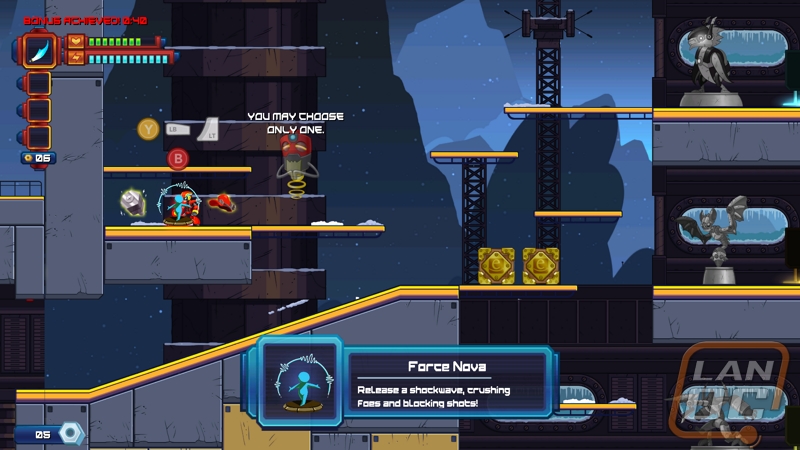 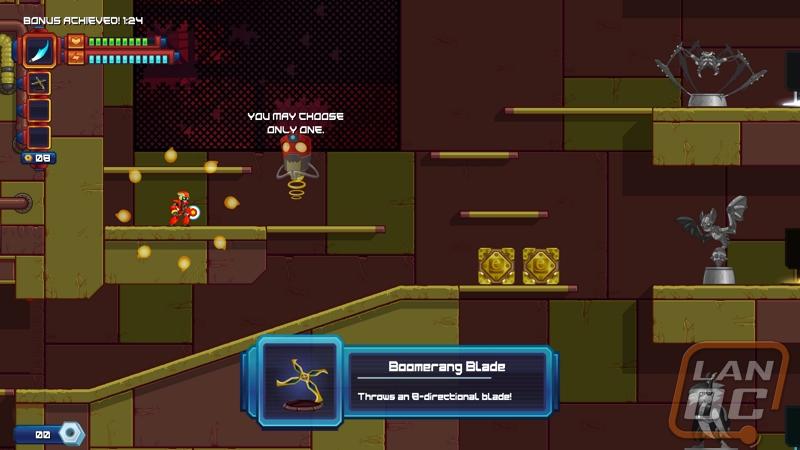 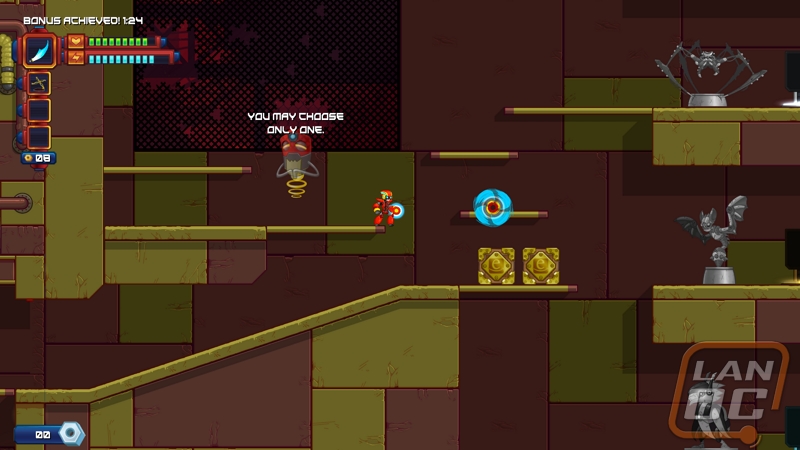 You can also collect a currency as you proceed through levels, nuts, that can be spent on upgrade stations that are moderately off the “normal” path or vending machines that dispense health, mana, or armor. You can also find these in various breakable containers throughout the level. Each level also seems to feature a stronger version of the stage’s signature enemy, identifiable by a blue recolor, that will drop “Soul Nuts” upon defeat. You’ll probably notice a place to spend some Soul Nuts when you start your first game, available for future “runs”. This is perhaps the biggest difference in 20XX. 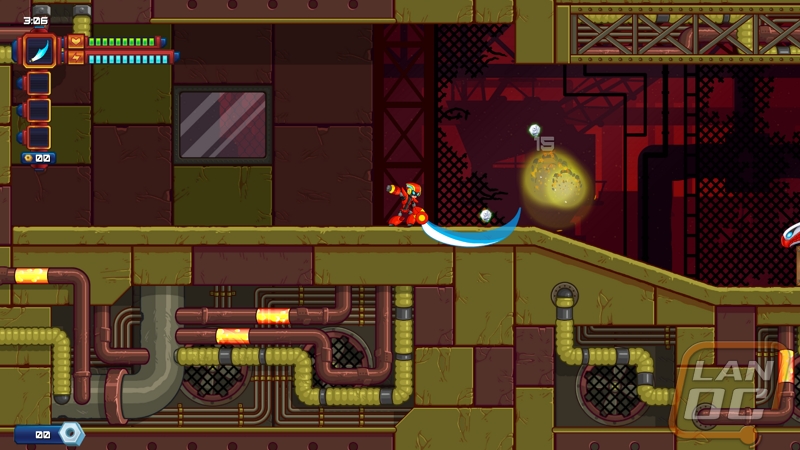 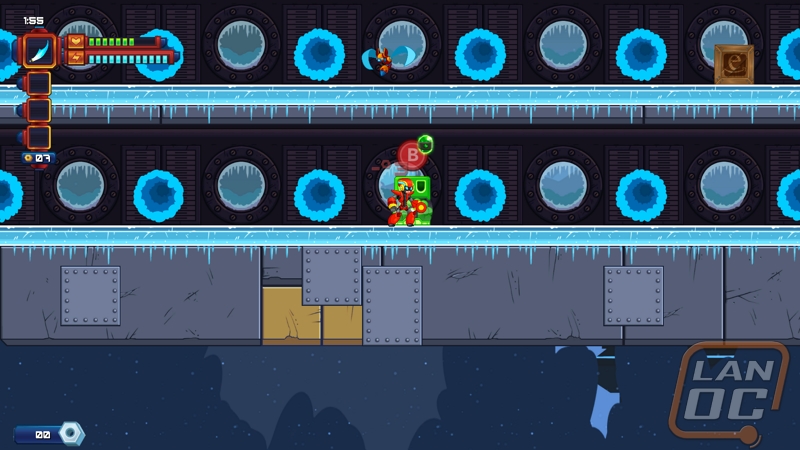 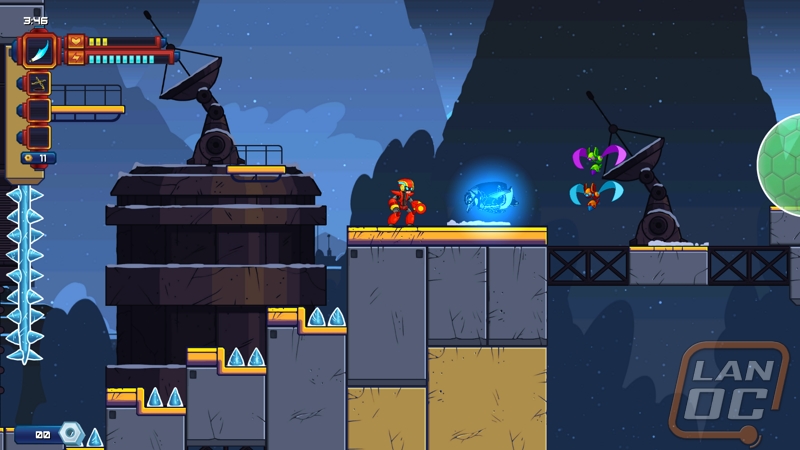 Reminiscent of the original Mega Man titles' inability to save, every attempt at playing through the levels is completely volatile: there are no save points, and when you exhaust your life the run is over. Suddenly the power ups and restoratives mentioned earlier are much more valuable. The Soul Nuts you collect are used to unlock powers so that they spawn in the levels. 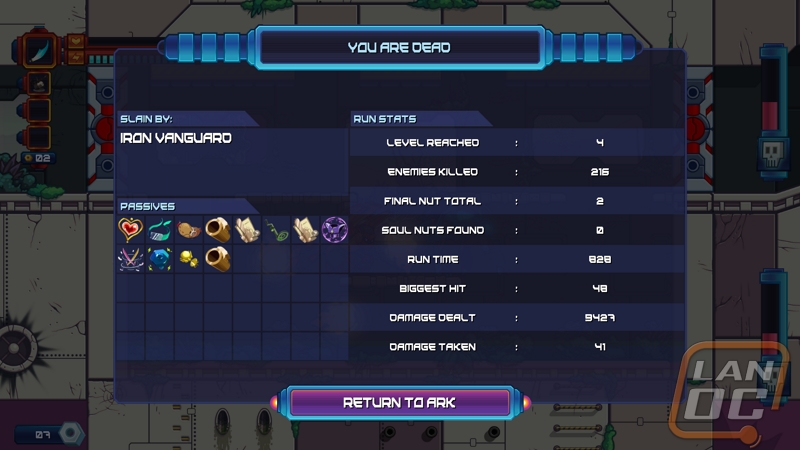 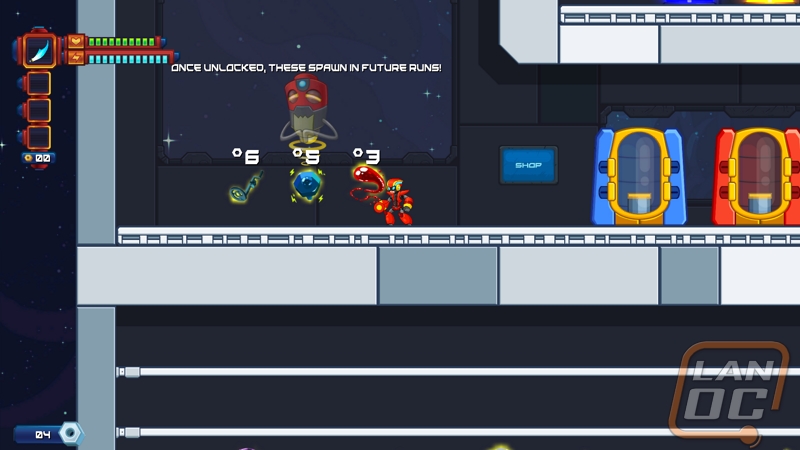 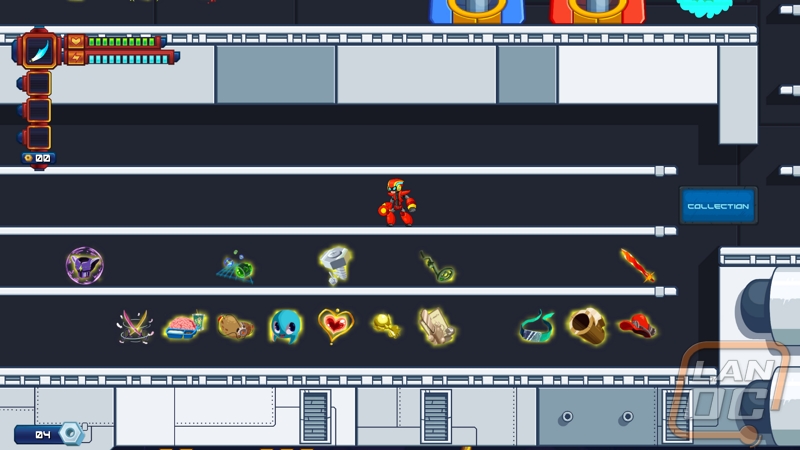 The use of the word “run” is very intentional. This format is very similar to speed running, which hits a personal chord for me. Additionally, you’re rewarded (and even placed on leaderboards if you so choose) based on how quickly you complete a level. Each run starts off on a randomly selected level, and as mentioned will be somewhat easy to complete. Instead of selecting any stage next as in Mega Man titles, you can choose from three offered to you at the end. Again 20XX has increased the significance of something similar like stage selection, creating strategy not only in what levels you may want to complete early, but also on what skills you may want to go in equipped with. Each level becomes more difficult, and the stage will actually change depending on when you visit it in your run. 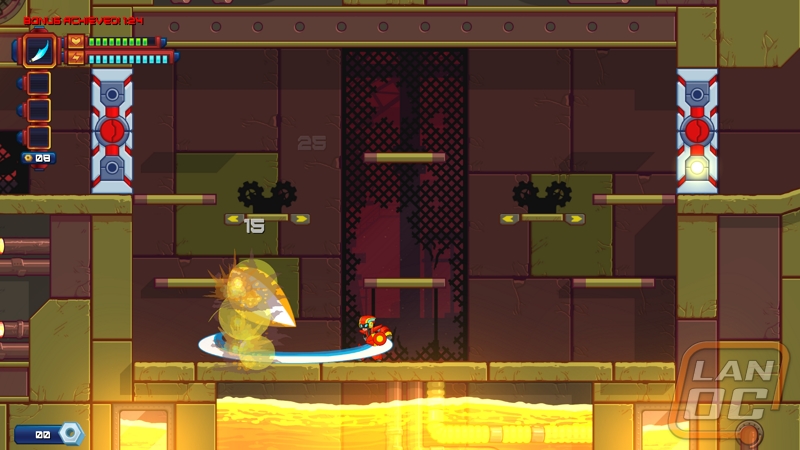 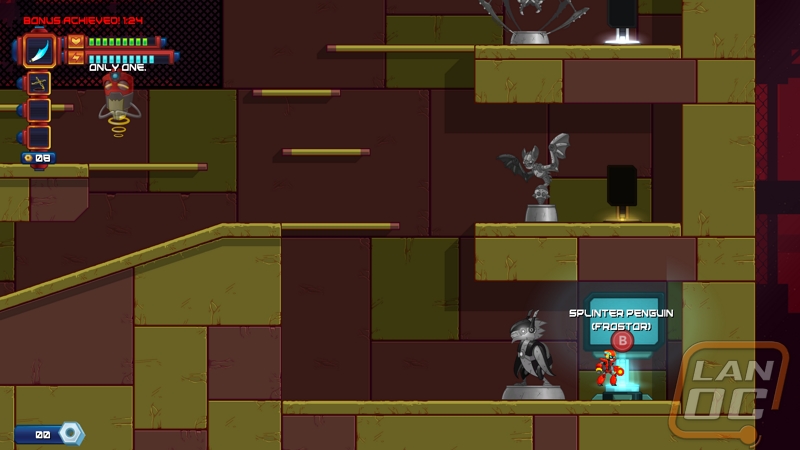 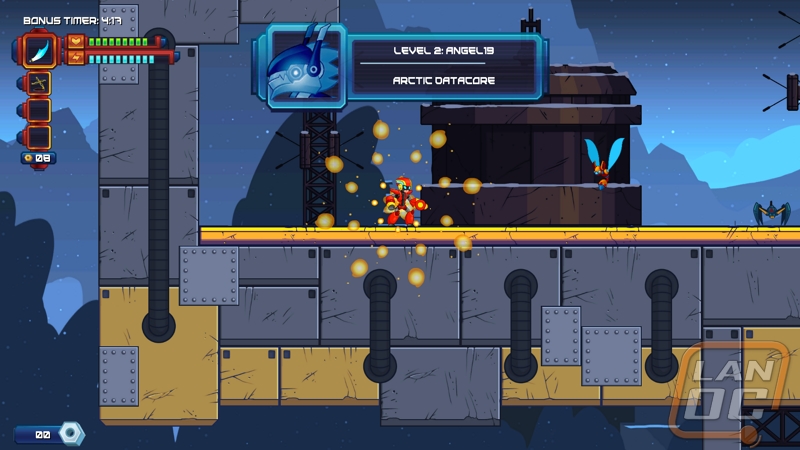 Most importantly, 20XX feels like a Mega Man X game. The movement is fast and the controls are responsive, featuring moves like wall jumping and even air dashes (with the appropriate upgrades). The enemies are original although I hope some of the future content will be a bit more variety, a few are recolored or reused in different stages. While there is a nice collection of stages, the environment does repeat currently: two ice levels, two jungle levels, and so on. The bosses each have a technique that sets them apart, and while some are better than others, they’ve done a good job incorporating them into weapon skills. Some radically change the weapons in some pretty neat ways but they don’t actually interact with the map itself much, only to help clear the enemies. There are certain weapons in the X series that can help casual players progress (such as the sled from the charged Shotgun Ice in X, or the Strike Train in X2). These weapons are also typically taken advantage of by speedrunners to make it through the level faster, and I feel like that’s a crowd Batterystaple Games is trying to appeal to. 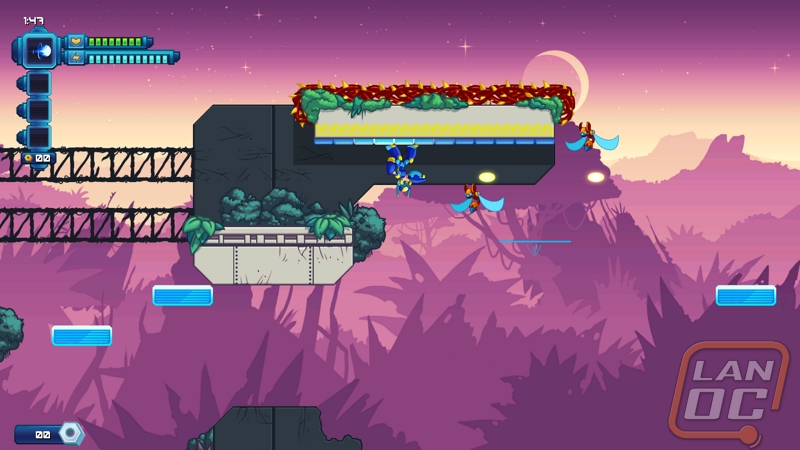 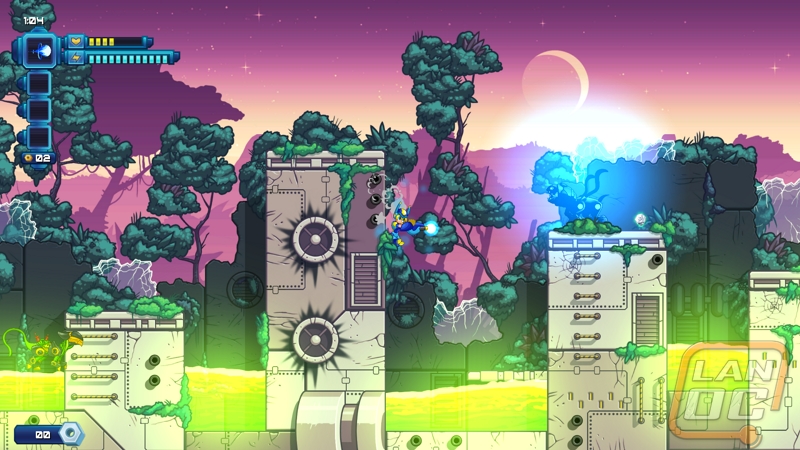 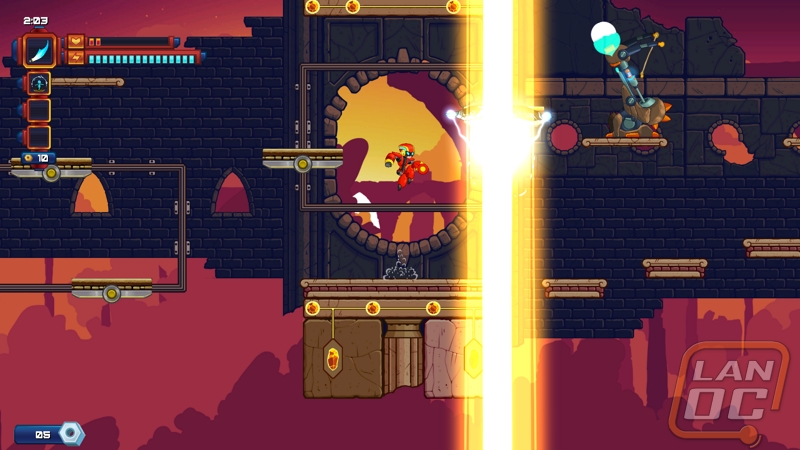 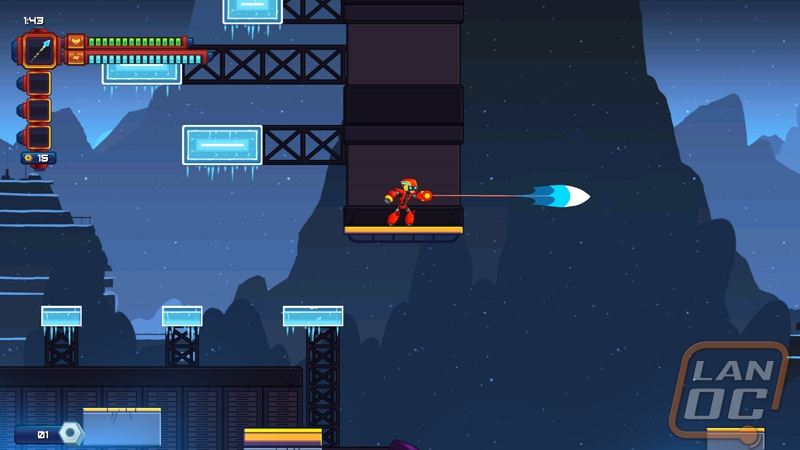 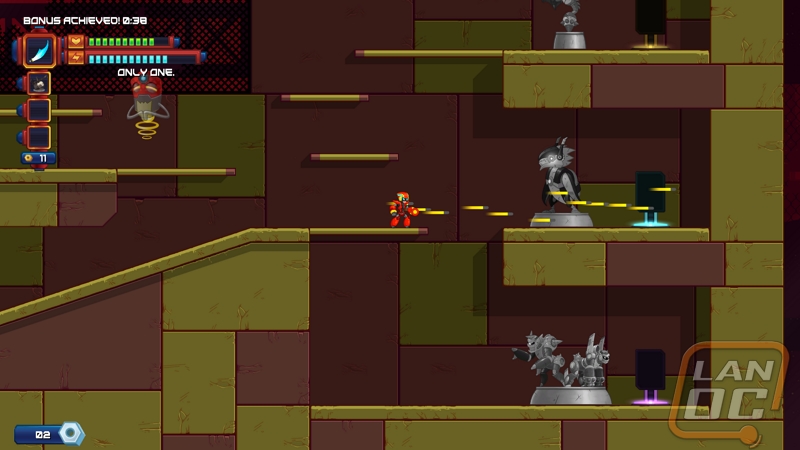 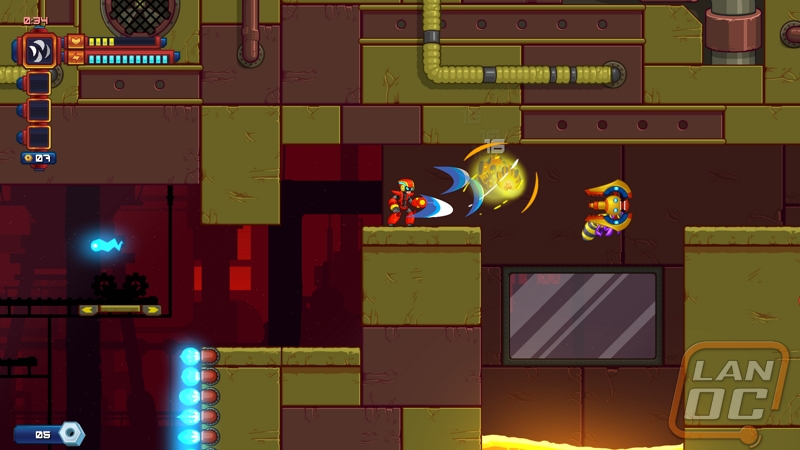 There are also a few different ways to play 20XX, accessible from the start area (the “Ark”) in the form of portals. The first is multiplayer, which is another big change. This can be local or over the Internet, though it seems to be something still in the works as I wasn’t able to actually join or host an online game. It launches with no errors (but a disclaimer warning that, well, it may not work), but after waiting several minutes I just started a solo run. There is also a daily hardcore run or the mentioned leaderboard run (also limited to one a day), and then the solo campaign in normal (as described above) or casual, in which players can unlock three passives even without spending Soul Nuts. 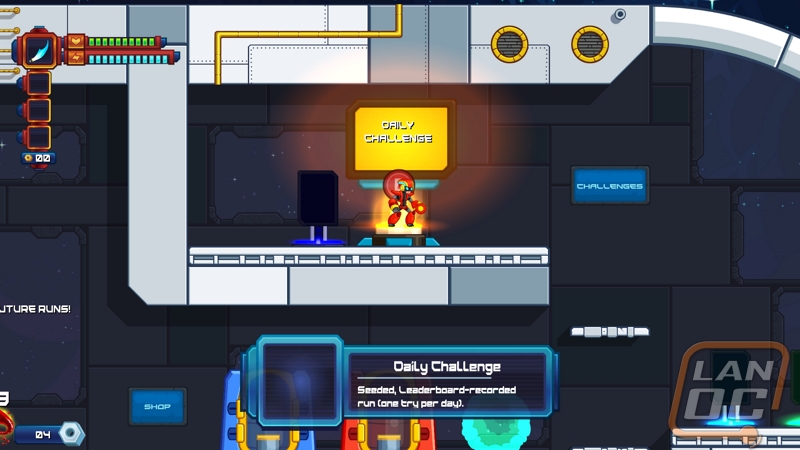 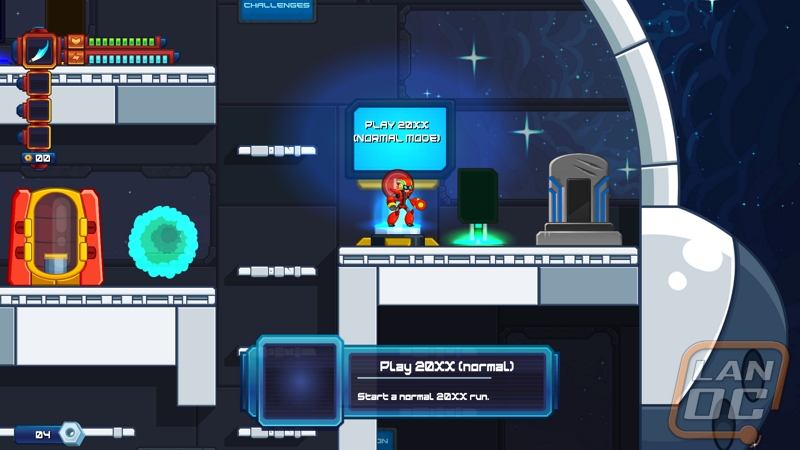 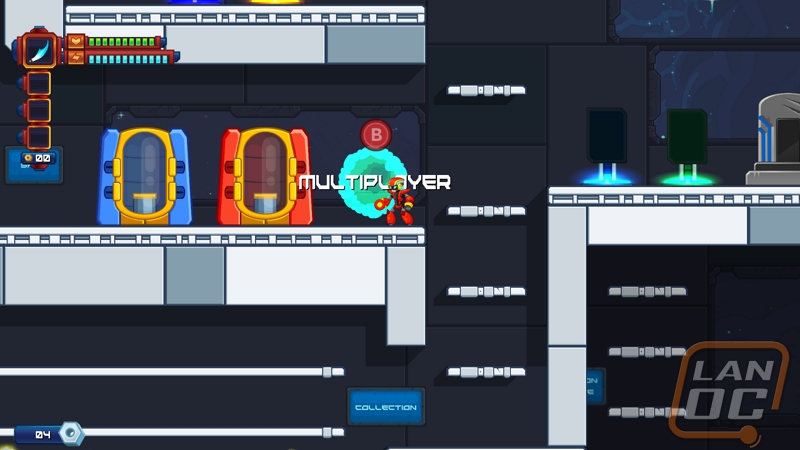 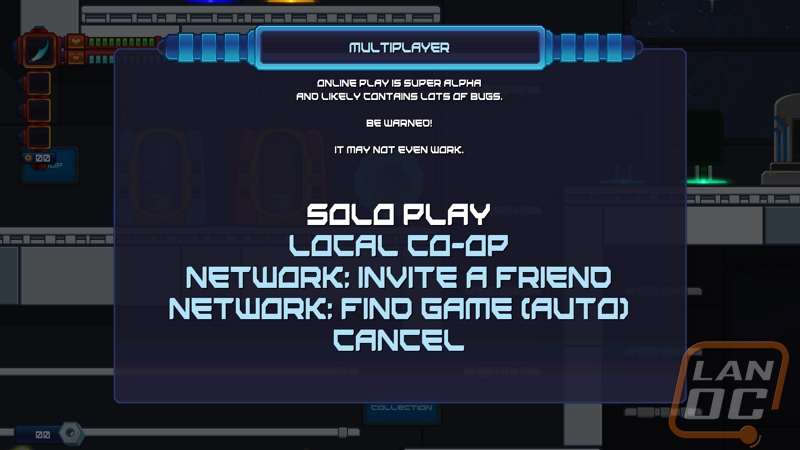 20XX passes the “just one more try” test, and I genuinely look forward to playing more. The game is best played with a controller and designed for an Xbox 360, but any controller with the right amount of buttons should work. I still play with a SNES controller, despite not having enough buttons to use all the skills (I usually just swap one out). Unfortunately, it doesn’t play nice with my bluetooth controller. I’ve got my fingers crossed for an upcoming patch to fix it though. Speaking of which, Batterystaple seems to be very communicative about updates, with a countdown on the menu and a patch history on the Steam page that seems be updated at least bi-weekly. As far as early access games go, this looks to be heading in the right direction. 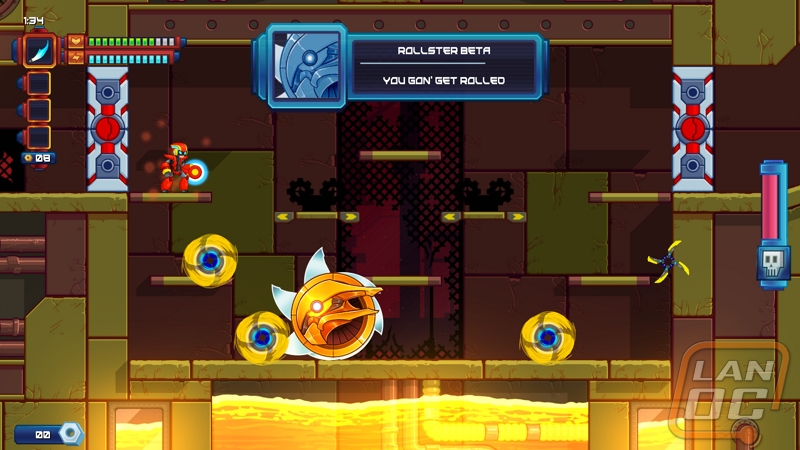