I will admit that when Wes first told me I would be reviewing Gunblitz I was nervous. This is because I don’t consider 2D shooters to be one of my favorite genres. This is because I tend to get frustrated and rage at games very easily. I cannot tell you how many controllers I destroyed trying to beat a high score on Geometry Wars Evolved! I am excited to do this review though, because not only is it a game developed by Rapture Studios, a place we recently toured and reviewed here but also because it will be a nice relaxing way to get back into the genre. Let us take a look at Gunblitz, and hope that I don’t break any keyboards in the process.

There isn’t really much of a story to the game; there is some in the sense that you are obviously a spaceship flying through space in incredible speeds while other spaceships, asteroids, and…things try to demolish you. There also seems to be a mini story to each level, for instance the second level seems to be pirate themed, and the third has something to do with warp holes, but it is all very vague and does not really affect the game much anyway. 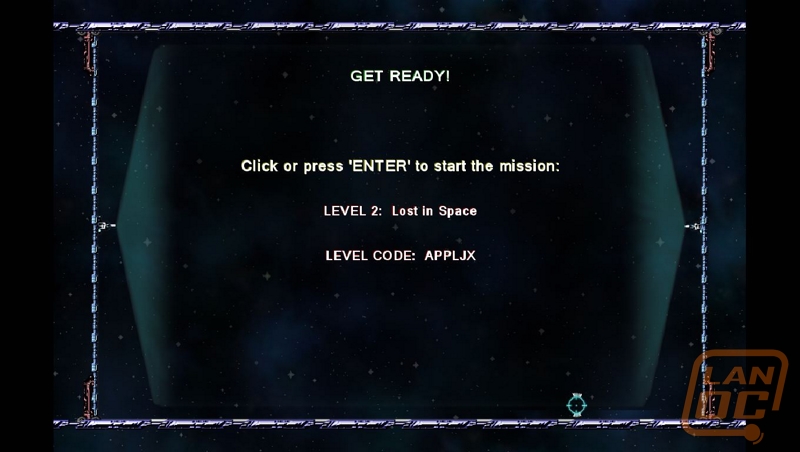 The game itself is very simple yet faced paced and hectic. As the player you control a spaceship which can move in all four directions on the screen, most of the enemies come from the right side of the screen, but sometimes there is a curveball and they will come from above or out of what you thought was a satellite broadcasting ESPN 8 to the fine people of Mars.

The spaceship has two different modes of fire. The first mode is a barrage of bullets that blast away at the enemy and the second is a guided missile that will obliterate whatever it hits. On top of your two main weapons you also get alternate abilities which seem to change from level to level. For instance, on the first level the space bar was a heat release that reset your guns heat to zero and allowed for your weapon to fire faster. On the second and third levels, the spacebar still discharged all your heat, but this time as a cone of fire that deploys in front of your ship taking down any enemies in your way. There are also some other alternate fire abilities such as the shield, the shield consumes energy which is picked up in the form of orbs that are left behind in the rubble of your destroyed foes. Without the energy from these orbs, you cannot use the shield, but properly timed and well executed you can keep a permanent shield up as you blaze through the level picking up the little yellow orbs to keep it charged. The orbs also affect your basic shields on your ship. If your basic shields deplete to zero, you will die with only one hit. 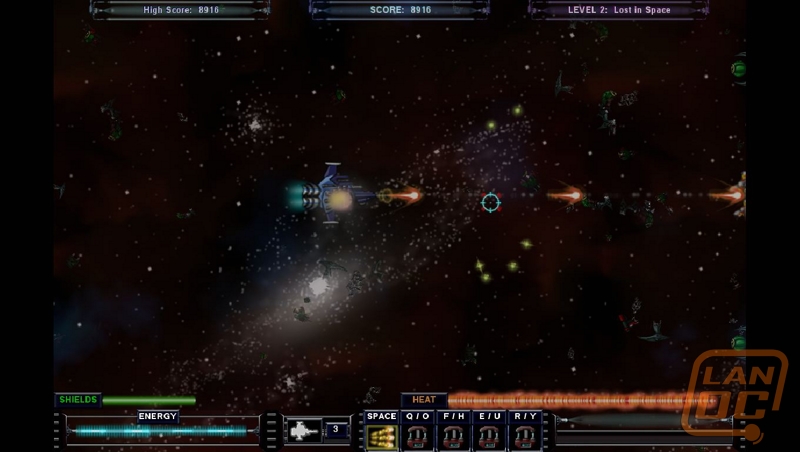 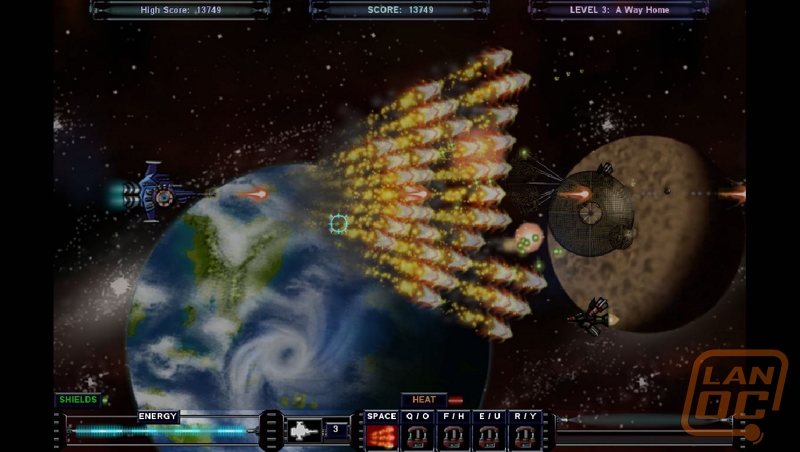 Each level you travel through space destroying countless foes and foreign objects while collecting orbs and points. At the end of each level there is a boss, all with varying weapons and abilities and therefore different tactics required to defeat them. I played the game on easy (as I said, I am bad at this!) and the boss fights weren’t too difficult, but they still offered somewhat of a challenge. I can certainly see how increasing the difficulty level could make the bosses stronger, not to mention put more enemies on your screen at the same time. The overall goal is to rack up as many points as you can in your three lives keeping in mind that each level offers bonus rewards for completing it without losing a single life. 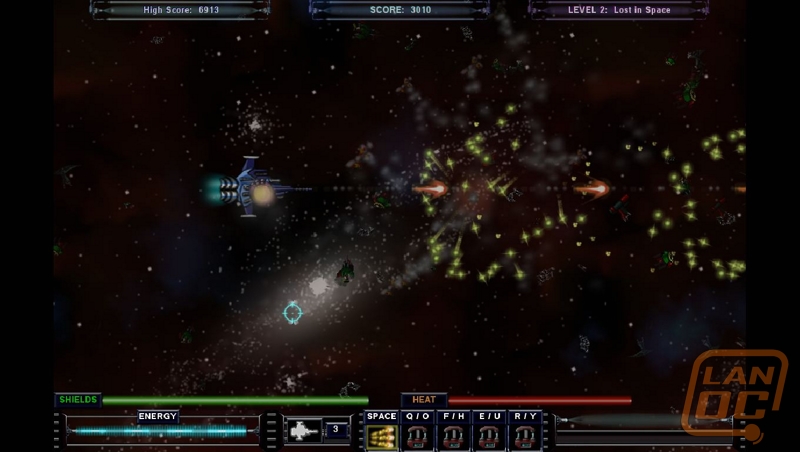 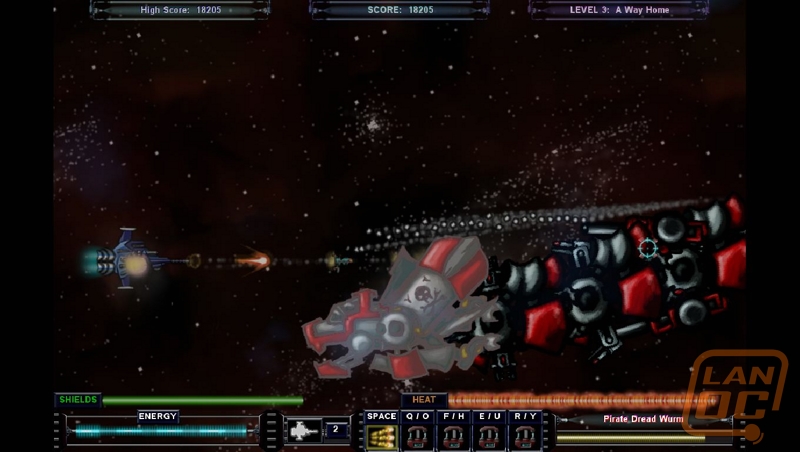 One minor annoyance I have with the game is that it doesn’t offer a save function. Instead each level offers you a code once you complete it, the code can be inputted on the main screen to bring you back to that level without playing any of the previous ones. Using a code to skip a certain level completely resets your score and lives, but does allow you to skip some of the earlier levels in order to see everything the game has to offer, especially for baddies like myself who can’t beat the game in only three lives. Rapture makes up for the code system somewhat by at least making the codes fun, for example the code for the third level is LEYEFUVASALR (Life of a Sailor) and the level is pirate themed. This minor addition makes writing down the codes a little less bothersome as there is a fun little message to decode each time.

The controls for Gunblitz are very simple and easy to use, which is a plus, because when the game gets crazy, I don’t know how many more buttons I could handle. W, A, S, and D move your ship around on the screen to their respective directions (W up, A left, S down, and D right), and the mouse fires your weapons as well as aims your cursor. The primary fire, which is the barrage of bullets is done by clicking the left mouse button, and the missiles are fired using the right mouse button. The missiles are the only thing that I have noticed you need to aim the cursor for seeing as how the shot is guided to wherever you have the cursor aimed, including behind or above you. Space, Q/O, F/H, E/U, and R/Y are the buttons that are used for the special abilities. Space is used for the weapon vent or slag strafe as they call it, the Q/O combo is used for the deflector shield, the F/H is used for lightning gyre, the E/U is used for the charged particle beam, and the R/Y is used for the annihilator. 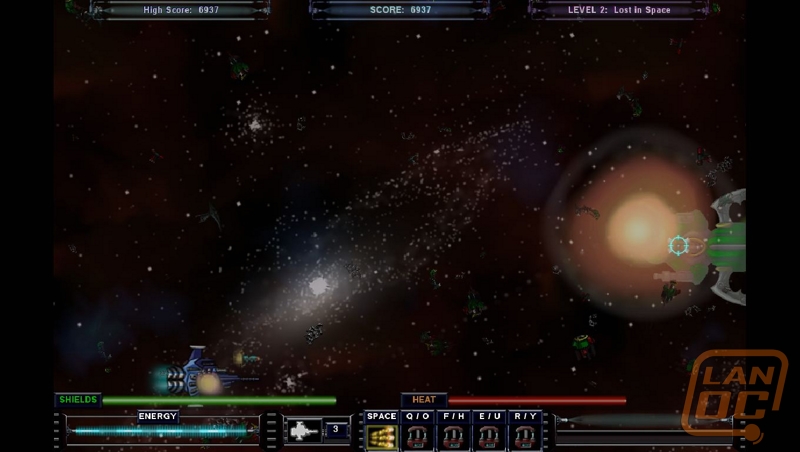 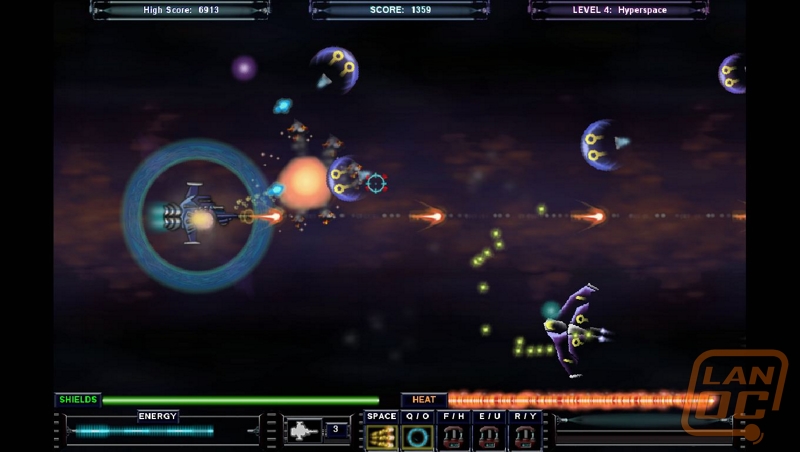 I have two minor problems with the control scheme as it stands. The first is that the keys are not able to be customized that I have seen. You are basically just stuck with how the developer has programmed them, and if you don’t like it, well tough titties. The second problem that I have is that there isn’t any gamepad support. Now this is to be expected after my first complaint, a game that will not let you customize your keys is probably not going to support a gamepad. Either way it is somewhat frustrating for a player such as me who loves to use their Xbox controller. 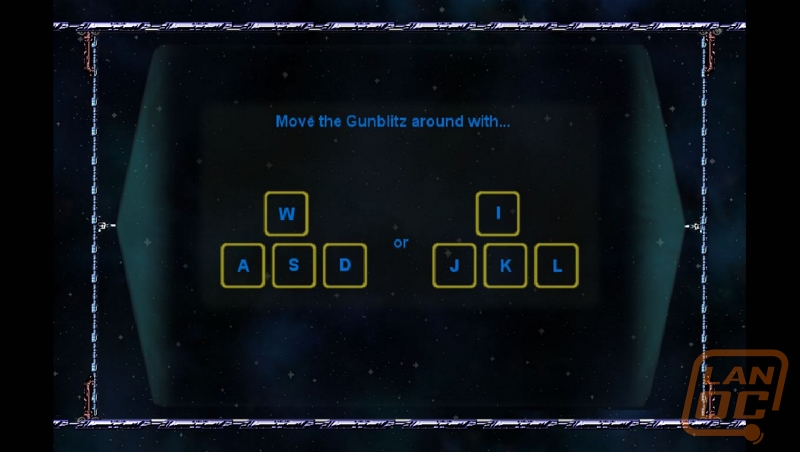 The graphics for Gunblitz are what is to be expected from a 2D shooter, but at the same time they seem to do the job. The art style is fairly simple and overall has a comic book feel to it. The background seems to be one solid picture that is just rotating continuously, much as you would see in older movies when they were filming car chases or horseback scenes. 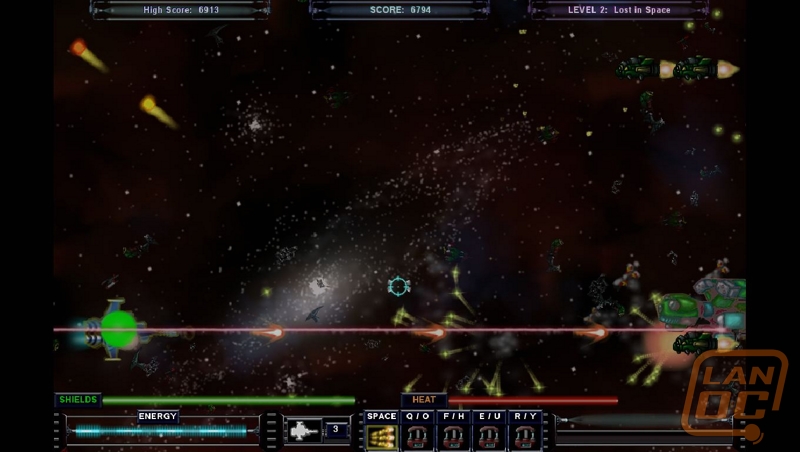 For a 2D game, Rapture has managed to do some pretty cool stuff with the ships in the game. There is one enemy type in particular who start out as satellites that appear to be part of the background. These satellites then morph into ships right in front of your eyes and begin attacking you. I only saw this particular strategy used in one level during my play time, but I can only hope and assume they use it later on in the game. 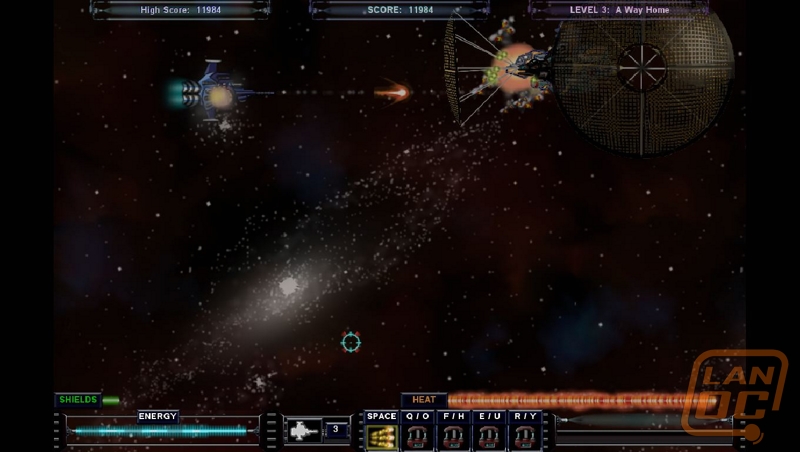 The audio in the game is limited to the music, which normally would be a bit upsetting to me seeing as how I like the artistic value of video games which includes the voice acting and performances, but with the type of game that Gunblitz is, it works for me. The music is very simple, yet varied. Each level has a different tune that you rock out to as you shatter line after line of your foe’s defenses. The music is exciting and well placed so that you get the proper feeling on each level and at the correct time, and since you only spend a short amount of time on each level it doesn’t get old. I do find the menu music slightly annoying, but just try to avoid spending too much time in the menu and it is a non-issue. I did notice that the music cannot be turned down in game. The sound effects can, but the music can only be turned down outside of game, which is needed because it seems to be overly loud.

The other sound effects in the game are where it starts to fall short. Most of them seem to be rather generic and flat, from the sound of the guns to ships being destroyed and your guns being vented it doesn’t really do the rest of the game justice. They just aren’t exciting and seem out of place in a fast paced shooter like this. I would prefer that amongst the music, the chaos of the fight, and explosions that I have no idea what is going on and what sound is coming from where. Instead what I get is a chaotic game with exhilarating music, but rather flat audio other than that. Luckily the other audio is quiet and it doesn’t distract too much from the music and other excitement of the game.

Overall I must say that I am pleasantly surprised. After my past two indie game reviews, and coupled with the fact that the game is not my forte, I expected that I wouldn’t enjoy it and that it would be an overall disappointment. Sure it has its flaws, like some flat sounding audio, lack of customizable controls or use of a gamepad, and an archaic save system. But the game is fun! The idea is straightforward and well executed, the art style is simple yet effective, and the music fits surprisingly well. On top of all that, I didn’t break anything! For the price of one dollar I don’t think it gets much better than this, I mean how many of us bought Cricket Revolution when it was on sale for a buck? How many of you actually launched it? Yeah, that’s what I thought. After this little gem I am excited to see what future surprises Rapture Game Studios may have in store for us in the future. 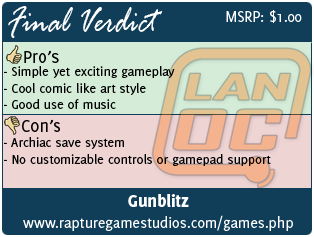 We have 1267 guests and one member online