LANOC Breaks Down the Engie Update

Howdy partners, circle the wagons, light a fire and I'll spin ya a tale of science gone mad. Of course I'm speaking about this past weekend's latest Team Fortress 2 update: The Engineer Update. Join LANOC's Tim Ashdown as he breaks down the latest update to best multiplayer game going.

Well, the wait is over. Last Thursday those cowboys over at Valve rustled up a whole bunch of new content for TF2 by releasing the much anticipated Engineer Update. This time around we saw the addition of 4 new weapons, 35 new achievements, 4 new maps, and a few extra gameplay tweaks.

The first new weapon can be unlocked by random item drop or by completing the first five Engineer achievements. The FJ replaces the Engineers meager shotgun with a machine designed for vengeance. First off you'll notice that the FJ has half the clip size of the traditional Shotgun. Cutting the clip size in half makes for some heart stopping moments if you're caught with an empty clip. But wait there's more... The FJ doesn't get your standard “Critcal hits” instead the FJ gets “Revenge Crits” what this means is that for every opponent your Sentry Gun mows down the FJ will receive two “Revenge Crits” once your SG is destroyed whether by you or the other team. A player can have up to thirty-five “Revenge Crits” saved up but once the player is killed the counter resets to zero. 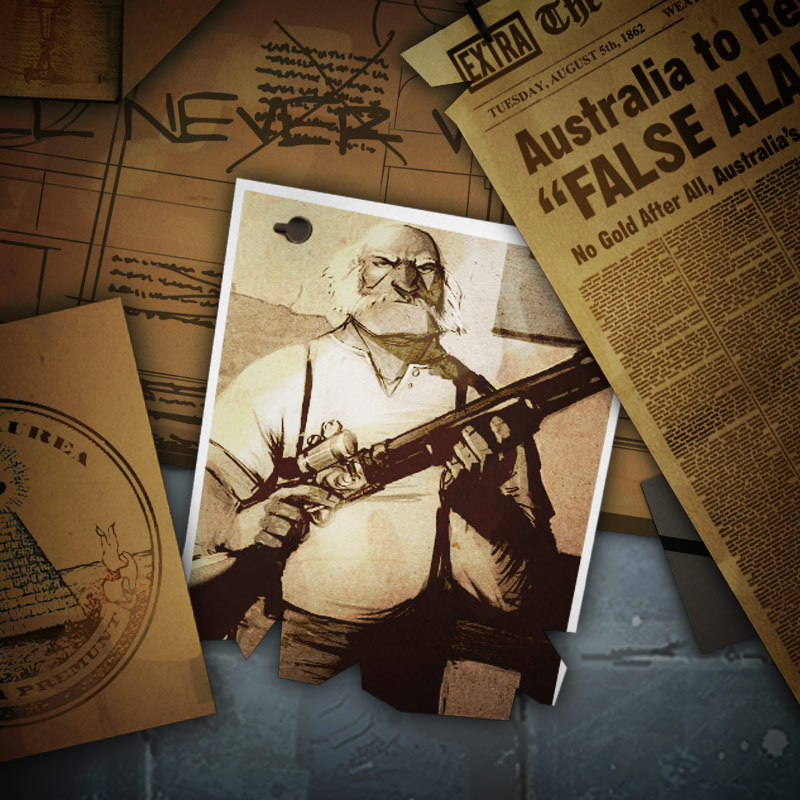 Implications: You may see a lot more engineers rushing to the front lines once their Sentry is destroyed rather than retreating to rebuild. The FJ can increase an Engineer's ability to act offensively rather than defensively. The FJ also features a brand new taunt and subsequent insta-kill to those who may not be musically inclined. By pressing the taunt button with the FJ equipped the Engineer will whip out his good ol' six string, strum a chord, and then smash the guitar on the ground or over the head of any opponent within range killing them instantly. Who knows how to rock? Dell Conagher knows how to rock!

The second new weapon, the Gunslinger can be unlocked by random item drop or by completing eleven Engineer achievements. The gunslinger replace the traditional wrench with a cybernetic arm. Don't fret this melange of man and machine can still be used to repair and upgrade your buildings in addition to a few new uses. First like the Frontier Justice the Gunslinger does not get traditional “random cits” instead it allows for engineers to perform a three-hit punch combo where the third hit in succession will always be a critical hit. Second, the Gunslinger grants an additional twenty-five max heath to the wearer effectively raising the Engineer's health from 125 units to 150 units. And last but not least we should say hello to the Gunslinger's little friend. While sporting the Gunslinger the Engineer's normal Sentry gun will be replaced by a new “combat mini-Sentry”. This new “mini-Sentry” only costs 100 units of metal to build, deploys four times faster and fires 50% faster than a standard level 1 Sentry, Now, there are a few downsides to this new “mini-Sentry” first, it can't be upgraded or repaired and each bullet does only half the damage that would dealt if fired from a standard level 1 Sentry gun. 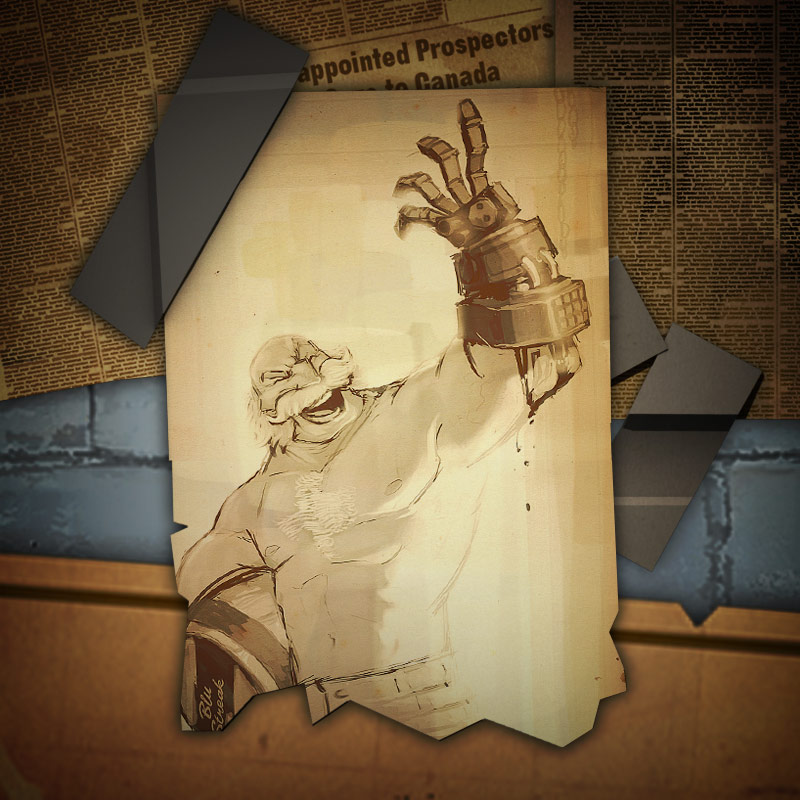 Implications: Much like the Frontier Justice the Gunslinger significantly increases an Engineer's offensive options but these options come at a price. Having no standard Sentry guns can put a defensive team or even an offensive team at a serious disadvantage. So before you become a one man Alamo defender make sure that there's a defensive Engineer available to hold down the fort. The Gunslinger also comes with it's own special taunt as well. Unlike the Six String taunt the Gunslinger's taunt does some damage before killing your opponent. By hitting the taunt button with the Gunslinger equipped the Engineer will pull out a cord from the mechanical hand which will cause it to rev up and begin to spin around. If you are within range of an enemy the taunt will to 1 damage with stun to the opponent. Then finally the Organ Grinder's (name of the Gunslinger's taunt) last blast will do 500 damage which will kill even the most robust looking Heavy. It's science run amok I tell you.

The Wrangler is essentially a remote control for your Sentry Gun or Mini-Sentry. It allows an Engineer to have direct control over where the Sentry Gun points and what it can fire. If a Sentry is upgraded to level 3 the left mouse button will fire the Machine Guns while the right mouse button will let loose the Sentry's barrage of Rockets. Also while an Engineer is using the Wrangler the device will produce a shield which encircles your Sentry Gun. This shield will absorb 66% of any incoming damage and will also increase the Sentry's rate of fire. While using the Wrangler the Sentry Gun will produce a colored dot to help in manually aiming the gun. 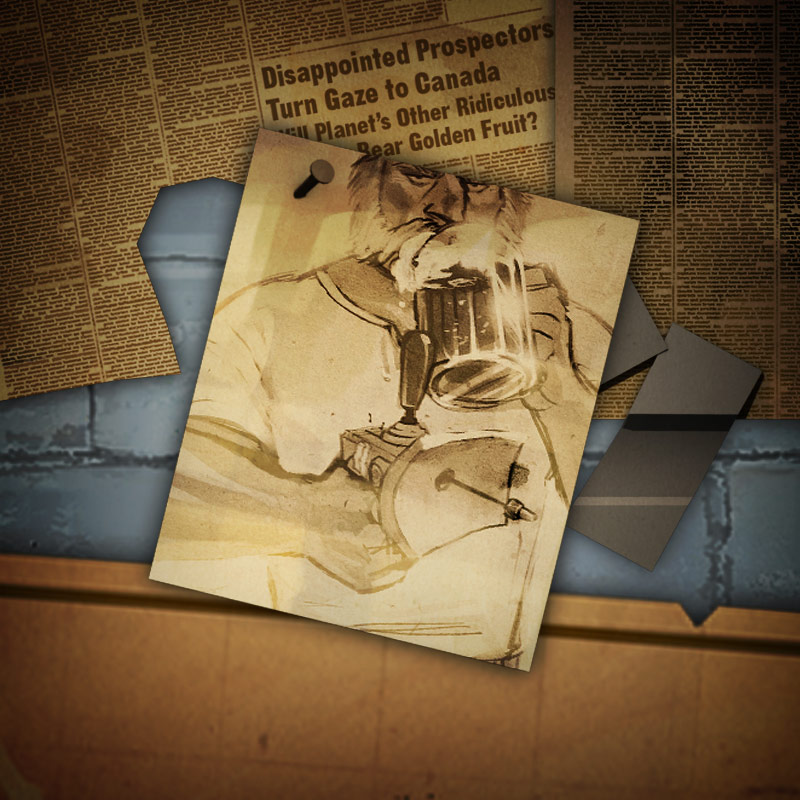 Implications: Typically Engineers can be lazy. They just sit back, put their feet up, whip the ole' six string and strum a jaunty tune while their Sentry Gun does all the work. Well, not anymore! With the Wrangler an Engineer can throw off the shackles of the Sentry Gun's Skynet like artificial intelligence and begin to really do some damage. One of the things I noticed is that guns being controlled with the Wrangler have a much larger range. Since bullets can be fired where ever the Engineer chooses it makes for some pretty snazzy Sentry Gun sniping the downside being that the other team can see exactly where you gun is pointed. One new implication however, is that it is now a lot easier for a talented Engineer to fire some rockets at his feet and perform a Sentry rocket jump allowing them to jump higher than the skirts at the local barn dance. Yeee Hawwwww!

The SH is another community made weapon that has made its way into the TF2 lexicon. Created by community member WatchMaker|. The SH is also really easy to get a hold of, all you need to do is combine some Scrap Metal with an Ambassador in the crafting screen and viola you have a new scary looking wrench that acts like your standard Wrench with a few other features. Being hit with the SH will cause the effected player to “Bleed” and loose approximately 3-5 units of health a second for five seconds. The trade off for the Bleed effect is that by wielding the SH the Engineer will experience 20% more fire vulnerability. So, watch out for those pesky Pyros. 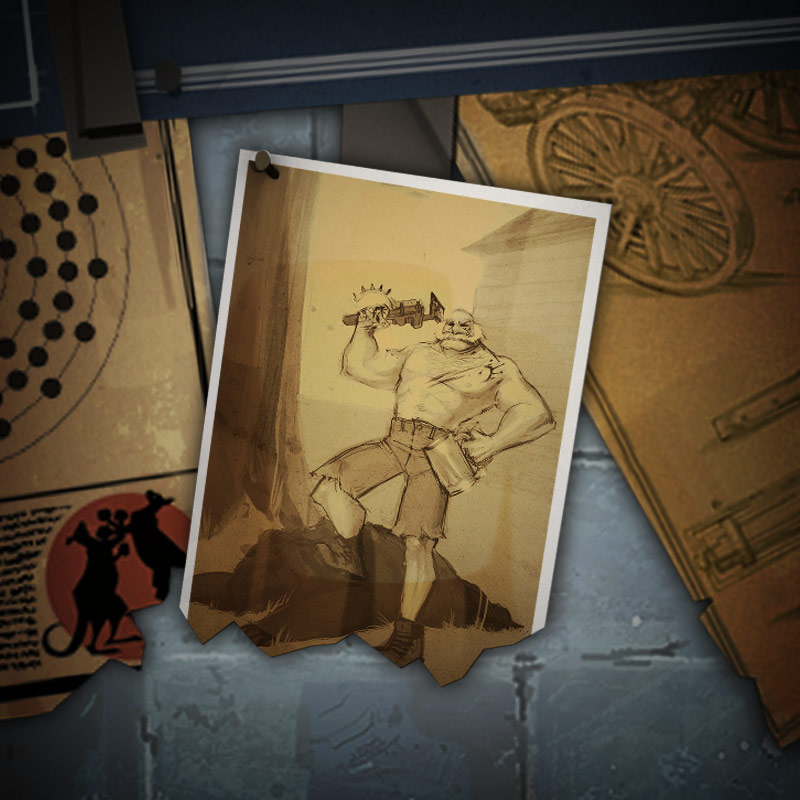 Implications: The SH is only the second weapon to feature the “Bleed” effect; the first being the Tribal Mans Shiv another community made weapon wielded by crafty Snipers. The SH won't change gameplay that much but it's good to see Valve reaching out to their community and adding additional user created content. Congrats to WatchMaker| for being honored by the game we all love.

Valve has added four new maps to Team Fortress 2 with the Engineer update. Thunder Mountain (a 3-stage Payload map), Hightower (a Payload Race map), Upward (a Payload map), and ColdFront (a community made Control Point map). As of my writing of this article I can only speak about Upward because I have not had a chance to play the other three new maps. I will say this, Upward is a Demoman's paradise. There are lots of hills. These hills allow a skilled Demomen to launch Grenade after Grenade over them right into unsuspecting crowds of opponents causing massive damage and disrupting the team's organized charge to the front lines. Try this technique out for yourself next time you stop for a Sarsaparilla on Upward. 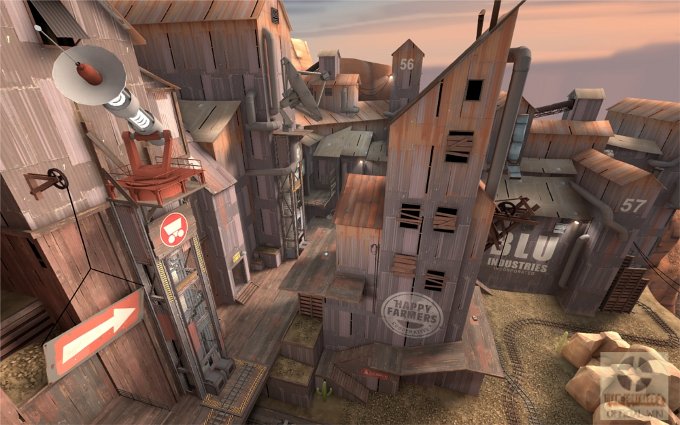 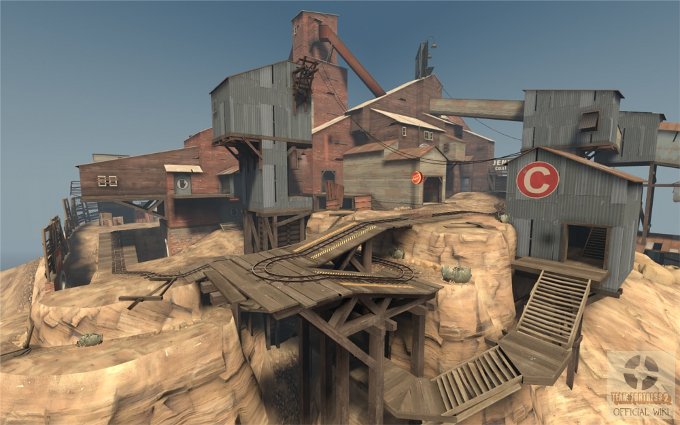 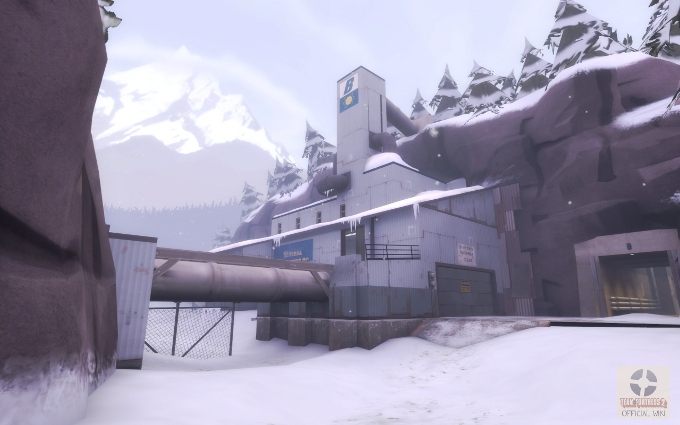 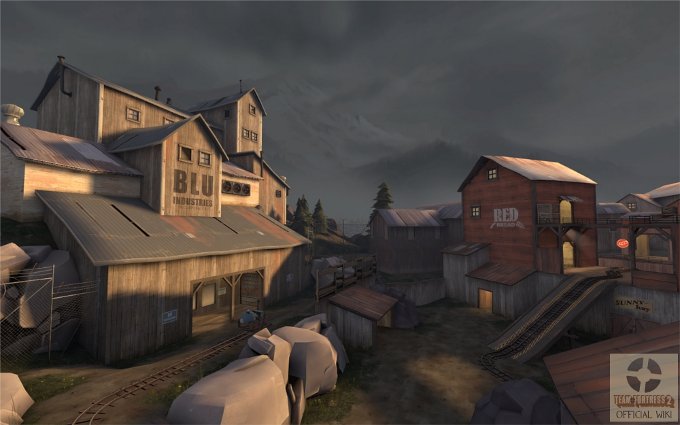 With every update whether major or minor Valve is always re-balancing and tweaking weapons and sometimes adding new abilities which can drastically change how a particular class is played. A few items that saw tweaks this update are: The Sandvich (which now uses a cooldown timer rather than a health pack recharge mechanic), the Gunboats (which now only reduce self damage by 60% rather than the original 75%) and the Tribal Man's Shiv (which had its Bleed effect duration lowered to 6 seconds from 8 and its damage penalty increased to 50% from the original 35%).

The tweaking of weapons wasn't the only gameplay change added to TF2, Engineers can now pick up their buildings and move them to a different part of the map and have them re-deploy. Although, while carrying a building the Engineer will move at a reduced speed. This allows for Engineers to effectively move their gear up to the front lines without having to destroy and then rebuild their buildings. Another gameplay tweak was to the bomb cart found on Payload maps. A glow has been added to the cart which allows the defending team to see an outline of the cart no matter where it is on the map kind of like how special infected can see an outline of their teammates during a Versus match of Left 4 Dead. This makes it much easier for a defending team to ascertain where the bomb cart is on a given map and where they need to fortify their defenses. 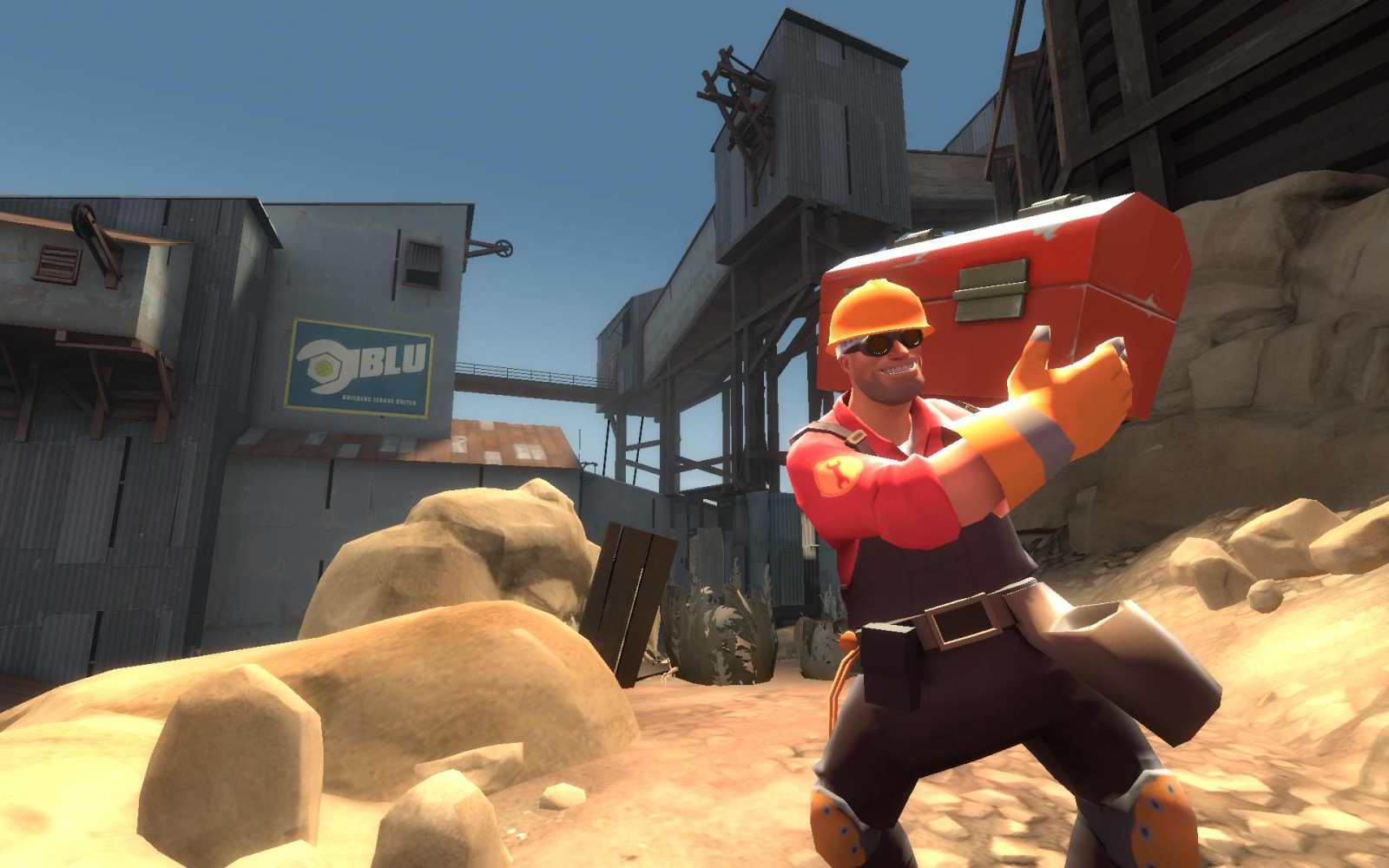 There you have it a complete break down of the latest update to Team Fortress 2. I for one have been enjoying this latest update more than I enjoy other Texan traditions like picking bar fights, defending the Alamo and sentencing prisoners to death. Thanks for reading and happy trails.

*NOTE* All images are property of Valve Corporation unless otherwise noted. All images used in this article are done so under "fair use" All other copyrights are held by their respective owners