Call of Duty: Modern Warfare 2 is not only one of the most anticipated games of this year, it is also one of the most anticipated games of all time. With so much hype surrounding a game it can be difficult to keep a clear head. Today I do my best to ignore all the bru-ha-ha and give Modern Warfare 2 an honest try.
Game: Call of Duty: Modern Warfare 2
Published by: Activision
Developed by: Infinity Ward
Platforms: Xbox 360, PC and PS3 (Review Version)
Genre: First Person Shooter
Release Date: 10/11/2009
MSRP: $59.99
Reviewed by: Tim Ashdown 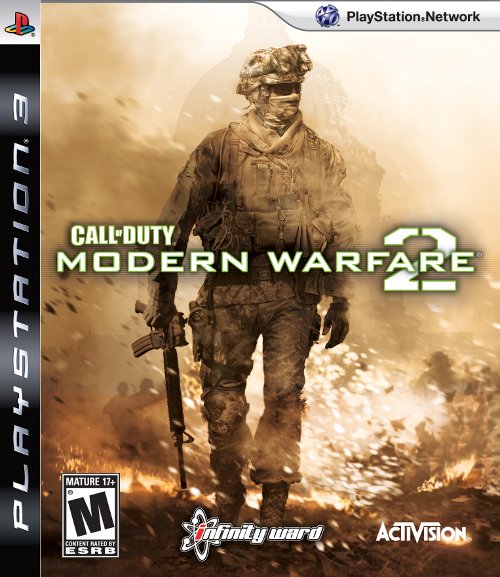 Having not played the original Call of Duty: Modern Warfare, I didn't know much about the story from the get-go. Luckily, Call of Duty: Modern Warfare 2 does an excellent job of covering any events you may have missed in the first game, and the developers (Infinity Ward) do a great job providing context for the very serious events which are about to transpire. Modern Warfare 2 is a game about following orders while at war. Whether you're an Army Ranger, Special Operative or just a run of the mill terrorist, what this game says is that orders must be followed at all times, despite your ethics, your apprehensions or the consequences.

There were a few times where I felt that the story was oddly paced. One moment you're speeding down a mountain attempting to escape from a remote mountain chalet, and in the next mission you're strolling through a Russian airport with a few other terrorists mowing down innocent civilians. I didn't have a problem with either of these missions, but it struck me as odd that these two very different experiences happen consecutively. This split narrative can be both a blessing and a curse, depending on how you want to look at it. On the upside, it helps break up the gameplay by adding more variety, but having the narrative jump around can lead to confusion, chaos and a lack of comprehension of the tasks that you've just completed. 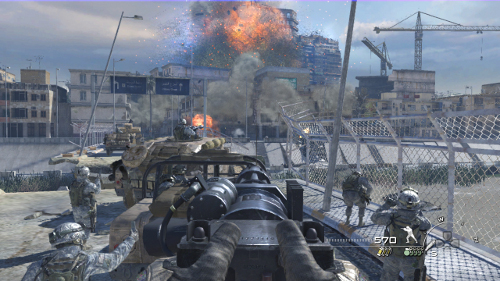 Modern Warfare 2 offers an extremely scripted experience. Infinity Ward has taken great care to craft interesting and provocative missions that really give the player a wild ride from beginning to end. With the exception of the occasional deviation to try and locate "Intel", the trade off for such scripting is that there are few opportunities for exploration outside of the missions. Throughout most of the game you are in the heat of battle. Bullets are whizzing by and explosions are going off all around you. To less experienced gamers this can be disorienting, but for shooter fans like me, it is exactly the kind of single player experience we want.

Modern Warfare 2 also contains it's fair share of weapons, many of which can be customised with attachments in the multiplayer mode.  Don't worry, there are a bunch of attachments that you get to use during the single player campaign too: thermal scopes, silencers and even heartbeat monitors are just a few of the options available.

While playing through the campaign on normal I found it challenging without being frustating. I did turn up the difficulty at one point, only to find that all enemies were suddenly armed with homing grenades, leaving me scrambling to throw them all back at them (and really, you can only throw back so many grenades). Needless to say, I ended up going back to normal difficulty after a very frustrating hour. Modern Warfare 2's “snap to” mechanic (which allows players to "snap to" an enemy if the reticle is near an enemy) does prove itself very useful when clearing out large groups of enemies. However, later in the game this feature began to feel more like a crutch that prevented from me finding the true Zen of aiming with a controller.

In addition to the campaign and multiplayer experiences there is also a cooperative mode called “Spec-Ops,” which puts you and a friend (either online or split-screen) up against waves of enemies or specific mission objectives. I found these missions to be quite difficult, even with a seasoned player as my teammate. To be honest, I felt that the “Spec-Ops” mode was geared towards the hardest of the hardcore, thus leaving me a little out of my element. 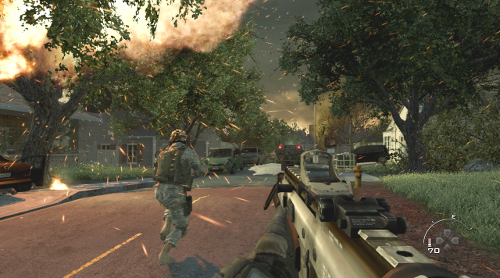 Graphically, Modern Warfare 2 is an extremely polished piece of software. The sheer amount of detail found on each character is stunning. However, on a technical level Modern Warfare 2 is definitely missing something, and that something is destructible environments. Sure you can shoot through walls, but why doesn't any explosive fired at that same wall even chip the drywall? In a world where other developers have been able to produce sharp visuals combined with real-time physics and environmental destruction, it saddens me to see that Infinity Ward hasn't yet mastered this practice. Had they done so I think that Modern Warfare 2 would have been a much more intense and enjoyable experience. 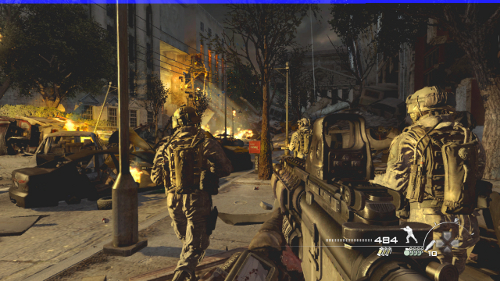 Audio plays a big part in the Modern Warfare 2 experience, so it's of no surprise that the composition and sound design are excellent. Infinity Ward has done a great job using the game's original score to inspire tension, excitement and fear. The voice acting is competent but not stellar. It does the job and is better than most military shooters (I'm looking at you, Operation Flashpoint and ARMA 2). Where the audio really stood out was during player cues (when the game tells you what to do). This being a military shooter, the cues come most often in the form of orders from your CO (Commanding Officer). What worked well was that the orders were very clear and helped you to approach objectives in the most intelligent and well planned manner. Sure, you could run toward a mark guns all ablaze, but chances are that you'd be picked off in seconds. Listening to your CO results in a slower but more tactical assault against an enemy position, allowing the player to become truly immersed in Modern Warfare 2's frantic military world which has you, above all else, following orders. 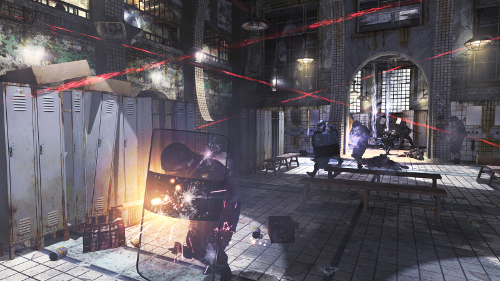 Multiplayer is where Modern Warfare 2 achieves near perfection. There are several match types available for every type of gamer. If you prefer simply killing, there are all kinds of death-match variants available. And for those out there who favor objective-based-multiplayer, Infinity Ward has got you covered. There are a myriad of objective-based game types for teams of every size. The feature that will keep you coming back to multiplayer is the experience and reward system. As you play and complete objectives, get kills or capture points, you gain experience which allows you to level up. Leveling up gives you access to new weapon attachments, perks, emblems and titles, allowing you to personalize the way you play and appear online. With 70 levels and loads of attachments for every weapon, players could easily spend months with Modern Warfare 2's multiplayer. Better yet, finding a match is made very simple through Infinity Ward's new match-making service called IWNet. Once I had the game booted up I could be in a match within seconds. The lobby system worked really well too. If you don't have enough players for a death-match,  IWNet will find another lobby in the same boat and then merge the two together. As long as the connection host was decent I didn't notice much lag. If the host quit the game IWNet took over and initiated it's “host migration” feature, which scans all the player's connections and then re-assigns hosting duties to the player with the best connection. It didn't work every time, but when IWNet came through and was able to successfully migrate hosting duties it was sweet! 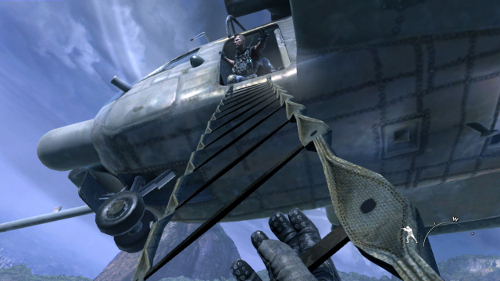 With Modern Warfare 2 Infinity Ward has tried to outdo themselves in every possible way, and I feel that they have succeeded. Call of Duty: Modern Warfare 2 is an excellent game with tonnes of content, compelling multiplayer and enough challenge and variety to keep everyone from the casual to hardcore coming back for more. Modern Warfare 2 is a text book sequel: it's bigger, badder and better than it's predecessor. 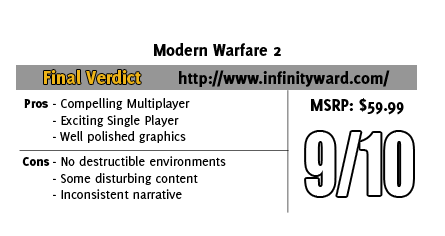