When the Prince of Persia was born in 1989, it began as a simple side-scrolling platform game. At the time, the graphics were beautiful, and the gameplay put a refreshing twist on the genre that Mario had set not too long before. After a few sequels and several years, PoP saw new life from Ubisoft, where it evolved from a 2-D scroller to a 3-D adventure title. And again, the graphics looked great on the current generation of console, and the gameplay took the breath of many gamers, myself included. Of course, the Sands of Time was followed by two more sequels, ending in 2005. With a new wave of consoles at their disposals, Ubisoft has revived the old franchise, and again it has seen many changes.

The new Prince of Persia is a fresh start; nothing really to do much with the previous games. The Prince is in the desert, looking for a treasure of some sort, when he happens along Elika, a mystic princess who is being sought by a few soldiers. Our protagonist, of course, jumps in and rescues Elika, and in turn is thrown into this world where an evil lord, Ahriman, is attempting to break free from his confinement. Without going any further and spoiling it for you, the storyline is actually pretty decent. The two mutter off a few cliches and lame catch phrases here and there, but all together it keeps pretty interesting.

You'll begin in the Temple, where you'll find four inactive ability 'plates'. Once you collect enough light orbs, you'll be able to buy one, and eventually all four. The 'world' is then split into four sections, each of those additionally split into five regions, headed by the four main enemies of the game: the Hunter, the Alchemist, the Warrior, and the Concubine. In each region, you'll fight one of the said bosses four times, each time 'cleansing' the land and revealing light orbs to collect. Once you have defeated the boss at each location, the door will open to its lair, where you'll fight for the final time. Access to certain regions, however, require one or more of the four locked ability, thus requiring you to at least collect a few of the light orbs. You also don't technically ever die; if you fall, for instance, Elika simply saves you and puts you back to the last solid footed area. 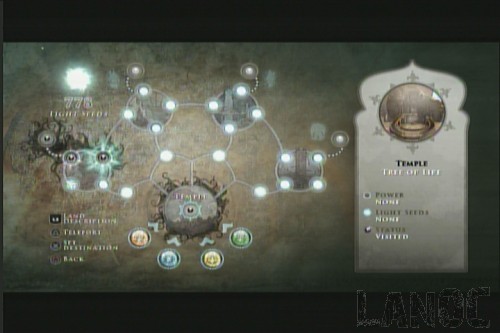 The new art of Prince of Persia has taken a more cartoonish form; where you might have expected something more along the lines of Assassin's Creed, you find something reminiscent of the LoZ: Windwaker. It isn't necessarily a bad thng; the graphics of the Windwaker worked suprisingly well, and there is something quite attractive about PoP's art scheme. The colors may look a little dull at first, but you'll eventually come to find the that is merely an effect of your main antagonist's hold on the land. As you venture out and 'heal' the lands, the world around you is revived, revealing an intricate and detailed environment to explore. Another plus is that there are little (I'm hesistant to say none, even though I didn't find any) visual glitches that you often find with the more 3-D modeled games. Sound Really not too much to say here. Decent score, nothing really to complain about. The one thing that may be worth mentioning is that Prince of Persia did a fairly well job with the voice acting. Control If you spend enough time with PoP to master the control scheme, or even long enough to get used to it, things run pretty smooth. The controls can get complicated, to say the least. Moving on the ground works pretty basic, but once you get to running on walls, jumping from pillar to pillar, and swinging on poles, you really have to watch what you're doing. There seems to be an input que line, meaning that if you jump to a pillar and happen to move the analog stick left in the process, you'll jump onto it and twist around to the left. This can be annoying if you didn't intend to do so, and ry to jump before the movement actually plays out, causing you to put your back towards a cliff and jump off into the abyss. Timing is also important, especially with the power plates that allow you to fly, crawl, and so on. Upon crawling onto one of these plates, you have to press a specified button in order to use it, or you simply fall off. There were times playing through the game when I press triangle (on the PS3) when I still had one foot off the plate, and I simply fell into a hole... again. As frustrating as the controls seem at times, its worth the effort to be able to pull of some of the stunts Ubisoft included, and the game just looks great in the process. 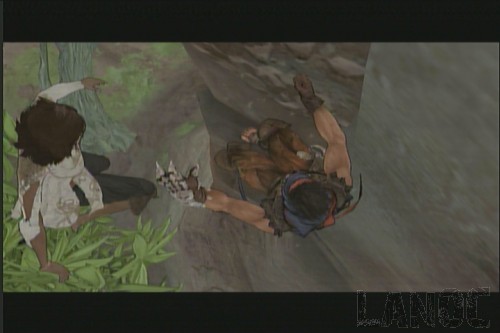 I wish I could say the same about the combat system. This is where I began to hate Prince of Persia, and fought off an urge I hadn't felt in a long time: to throw that damn controller as hard as I could. Perhaps it was all the talk about how great it was supposed to be, or indeed how great it predecessors were, but this portion of the game is just god awful. To begin with, there are only really five enemies in the game; four boss enemies and one generic grunt, who you only run into about twice in each area. You have three standard attacks: sword, aerial, and your new gauntlet, plus you can block. Despite how seasoned you are in battles, the game still tells you what to do. And most of the time, it screws you. Kind of like when Capcom said "Shoot them in the head! It always works!" and halfway through RE4 those damn spiders things with blades popped out when you did? Yeah, its like that, only less amusing. Moreover, the fighting areas are extremely small. Most of the time performing a three-hit combo will result in pushing your enemy to the edge, which will either kill him instantly (a true blessing in disguise) or cause him to disappear and reappear in the center of the stage; effectively ending your combo streak. Now putting you in the risk of being pushed off. During these battles, if you do happen to fall off the edge, get knocked down and miss the button-input prompt, or simply get hit enough, Elika (your magical companion) will save you, and in punishment of doing so, the enemy will regain health. This creates a bad combination that can lead to very long, frustrating engagements.

Other
I wanted to add that the trophies/achievements in this game are pretty easy to acquire. The range from easy (talking to Elika a few times) to the more difficult (having Elika save you less than 100 times, and beating the game in under 12 hours). If you can see past the flaws (and truly, its not hard to), Prince of Persia is definitely worth a play. 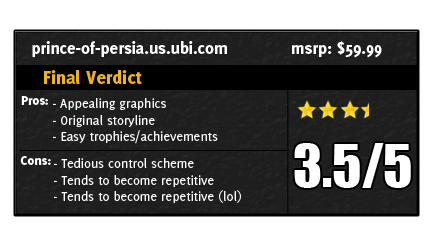 You might call him obsessed or just a hardcore geek. Wes's obsession with gaming hardware and gadgets isn't anything new, he could be found taking things apart even as a child. When not poking around in PC's he can be found playing League of Legends, Awesomenauts, or Civilization 5 or watching a wide variety of TV shows and Movies. A car guy at heart, the same things that draw him into tweaking cars apply when building good looking fast computers. If you are interested in writing for Wes here at LanOC you can reach out to him directly using our contact form.
Discuss this article
Log in to comment
Posts in discussion: Prince of Persia - PS3