When I first started playing Soul Calibur 4, I was convinced it was going to be simply an upgraded version of the previous titles. The main menu screen presented several familiar options- single player, versus, character creator, and the museum. Anxious to see how the new installment ran, I jumped straight into the classic Arcade mode. Like everyone who bought SC4, Star Wars fan or not, I was curious to see how the new guest characters performed. Since I had the 360 version, my special character was Yoda, a fighter whose height often gives him an advantage parallel to that of Oddjob. While in the previous SC games one could select from several costumes and weapons, the only customization available was between two appearances. So I chose one at random and began my first match. The screen that reveals which two characters will be matched up has been upgraded; a black background with the character striking some battle poses now introduces each side. And, of course, the on-stage character intro that allows for some trash talking and taunts still exists, and even seems to posses a higher CG quality than the actual gameplay, similar to a cut scene.
Review by: Lersar
Screanshots by: Lersar 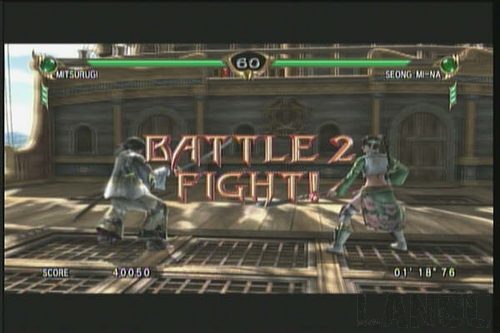 The play style isn't anything new; upper, mid, and low attacks, grapples, guard, and throws. But it didn't take long before I noticed some new features. For one, a colored gem placed beside the character health bar that I has simply assumed was part of the bar's decoration. However, as the match went on they began to shift from green to yellow and sometimes red. This is one of SC4's new features. To prevent one of the more annoying tactics, which was constant and often hard to break guarding, Bandai-Namco introduced the Soul Gauge. The gem starts off green, or blue when using skills, and will slowly begin to shift colors until it reaches a flashing red state. In the meantime parts of your opponent's armor that you focus on- whether it be helm, body, or leggings- will actually break off. The best part of this new feature is the Soul Crush, a move that can be executed when your opponent is flashing red and recoils from an attack. By pressing all four ofth faces buttons (or the shortcut key) at that time, your character will be perform the Soul Crush, automatically ending the round with a 'Critical Finish'. A lot like Mortal Kombat, but with less button imput. 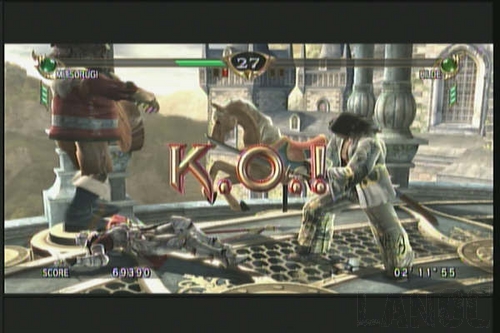 Another new feature is character style levels. The more you use a certain character, that character's style level will increase, all the way to level 9. The style level helps determine what kind of skills (another new feature) can be chosen during character creation. Creation itself has seen some updates. You can, of course, create a brand new custom character from scratch. But the new addition is the ability to completely redesign one of the game's playable characters, a feature that was hinted around in SC3. And there's incentive to do this, too; customizing a character's armor will give you more available skill points, which give more flexibility and options when equipping skills. For example, to equip a character with the skill 'HP Boost' (Recover HP by pressing A + B + K simultaneosly during battle), he needs 130 Gauge points and a Style level of 6. Character Creation is also the only place you can choose which weapon you want to use. It may seem like a hast at first, but the new character creaton system allows the player to completely modify a character to fit his style of gameplay. 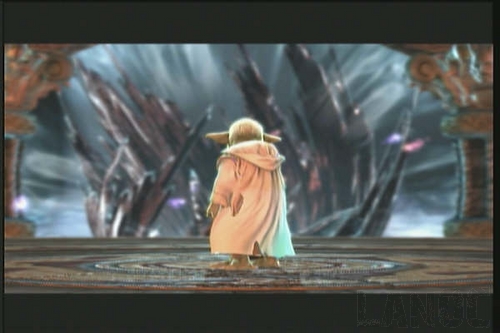 Despite its surface appearance, Soul Calibur 4 breathes a fresh breath of air into the much needed series. It isn't a game without faults; gameplay stills tends to get repetitive despite the different modes. The story mode doesn't offer much more than a short tale spanned across five stages. But SC4 does deliver when it comes to a classic arcade fighter. With sharp CG cinematics, nearly flawless in-game graphics, and an excellent music score, its definitley game worth playing. 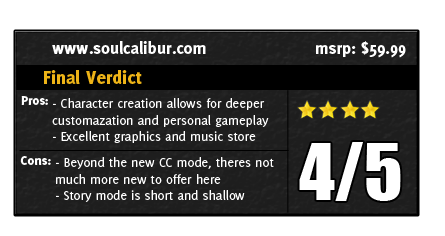 You might call him obsessed or just a hardcore geek. Wes's obsession with gaming hardware and gadgets isn't anything new, he could be found taking things apart even as a child. When not poking around in PC's he can be found playing League of Legends, Awesomenauts, or Civilization 5 or watching a wide variety of TV shows and Movies. A car guy at heart, the same things that draw him into tweaking cars apply when building good looking fast computers. If you are interested in writing for Wes here at LanOC you can reach out to him directly using our contact form.
Discuss this article
Log in to comment
Posts in discussion: Soul Calibur 4 - PS3