How many games can you be shooting a 105mm gun from a plane one minute, and the next adjusting for the curve of the earth so you can take someone’s head off from 1500 feet? Ok maybe that’s a bad example, but how many games can do that while having amazing online game play and a level of detail that can bring all but the best video cards to their knees? Infinity Ward answered that question with one of 2007’s best games, Call of Duty 4: Modern Warfare. 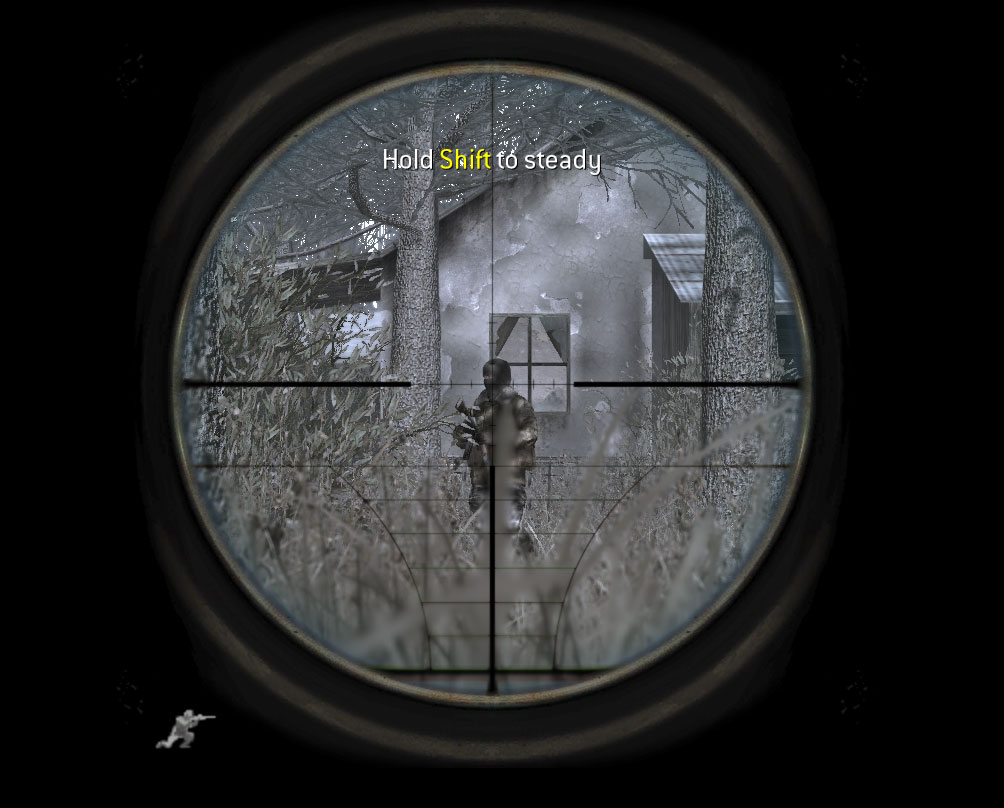 The fourth part of their Call of Duty series, Modern Warfare takes on a new path away from World War 2 that the past games focused on. This time the game takes you into a war against surprisingly well armed separatists. We are introduced to modern weapons and modern warfare tactics. You’re going to need every single one of them if you plan on protecting yourself, your country, and possibly the world.

Although a lot of people complain about the Single player campaigns being short. You can’t say anything about its story line. The game’s three Acts break down the storyline some but you should still be able to play through the game in a few days without putting much time in each day. You start off as a new recruit and they put you through a timed test to see what level of difficulty you should be playing on. This feature was so unobtrusive the first time I played through I didn’t even notice it; I wish more games would add something similar to this. It keeps people from playing a difficulty that is too hard or too easy for them. This way they can focus on enjoying the game, not being frustrated or bored. Overall I was really impressed with the single player mode. You play many different roles throughout the game including a sniper, infantry, and even a gunner on an airplane. The changes are just enough to keep the game interesting without having to relearn over and over.

After you beat the single player mode it opens up the “Arcade Mode”. With timed and scored levels you can compete against your friends or see how fast you can beat your favorite levels. I think this mode will come in handy when you can’t get online to enjoy the multiplayer mode.

Even though the single player mode is amazing the real bread and butter for this game is its online multiplayer mode. I spent some time playing COD4 multiplayer online and also on the lan at a lanparty. I don’t know if it’s because of my über nonability. Or the fact that people are nicer on the lan. But I enjoyed playing in the group setting more than online. That’s not to say the online games are bad; far from it. In fact online you can find yourself into a 54 person free for all. It seems they put this mode, along with the level “shipment” in the game to level up. It’s so bad that honestly, I felt dirty after doing it.

The best feature in multiplayer mode on COD4 is the leveling system they have put into place, along with the perks that go along with it. As of right now it’s a 55 level system, in order to level up you must collect XP by completing tasks and killing people. Each time you level up you will be rewarded with new challenges and new weapons. This gives you a reason to keep playing, it also prevents a newb with a good weapon to dominate; you have to prove yourself.

What would I change

font-family:Georgia, "Times New Roman", Times, serif;Even though its a great game, if I had my say in making a few changes this is what i would do.

-Co-Op through almost the entire game you are with a group of people. How much harder would it have been to add an online Co-OP mode to goe through the single player story line with a friend. This would have doubled the life of the campaign itself.

-In the future I hope they take advantage of the level system they have setup and release updates to add Levels. They could add weapons and other options along with this. My only concern with this would be upsetting the balance that they have right now.

-Improve the ability to pick servers with your friends in them. As of right now you have to use x-fire to keep tabs on which servers your friends are playing. This does the job, but I wish there wouldn't be a need for 3rd party software to fix this problem.

Overall this is an amazing game. It was even able to pull me away from Team Fortress 2, that’s something that even my beautiful wife can’t do sometimes. Even with the price averaging at around $50, I believe that Call of Duty 4 has the staying power to turn those 50 hard earned bucks into months of mind numbing game time. Add that to the recently announced news of more maps being released soon make this a no brainer. In fact why are you still reading this? I give the game 5 out of 5 stars. Please feel free to let me know what you think.

You might call him obsessed or just a hardcore geek. Wes's obsession with gaming hardware and gadgets isn't anything new, he could be found taking things apart even as a child. When not poking around in PC's he can be found playing League of Legends, Awesomenauts, or Civilization 5 or watching a wide variety of TV shows and Movies. A car guy at heart, the same things that draw him into tweaking cars apply when building good looking fast computers. If you are interested in writing for Wes here at LanOC you can reach out to him directly using our contact form.
Discuss this article
Log in to comment
Posts in discussion: Call of Duty 4: Modern Warfare - PC