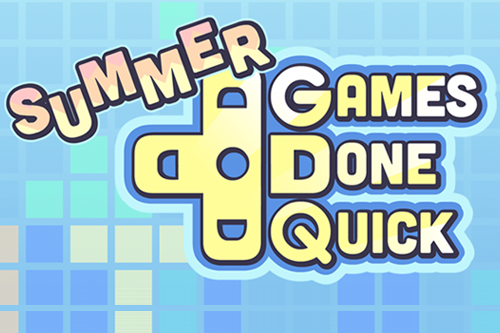 Summer Games Done Quick is the latter of two events hosted by Games Done Quick, a charity speedrunning marathon. Throughout the week of non-stop gaming, viewers donate to benefit Doctors Without Borders, an international medical humanitarian organization that provides aid and relief to individuals without health care due to varying unfortunate circumstances. I look forward to these events each year, and I’ve highlighted some of my favorite runs from SGDQ 2015 that I hope you will enjoy too.

Super Monkey Ball Deluxe
SMB is one of those games that my friends and I would pass at the rental store without giving it much consideration, and watching runs of this game really makes me regret that. A general and perhaps naive summary is that you must navigate a monkey in a ball across often narrow or dynamic platforms to reach a goal in the most time efficient manner without falling off. It’s entertaining at any skill level to watch, either due to spectacular failures of the inexperienced or masterful clears of the seasoned. Geoff and company do an excellent job exhibiting the skills and understanding of the game engine through 100 stages that will have you cheering at your screen.

Tetris: The Grand Master
Monday evening’s Tetris block was another pleasant surprise. Tetris isn’t my idea of a traditional speed run, free of glitches or a story to disregard. However, the amount of skill and precision required to survive the endurance runs is definitely on par with any other title. The block begins with a TA Death Mode race between two players. TA refers to the version, Tetris the Absolute: The Grandmaster 2, which introduced a few new modes of play including the featured Death Mode. In this mode, difficulty and speed increases as your level rises from block placement, with the goal in the race to be the first to reach level 999, or Grand Master (GM). Notice that it is placement, not line clear as in traditional Tetris, that increments your level. Also, the term speed here is somewhat misleading, as even though the game may not enforce as fast of a speed early on, these players are racing, and as such are always trying to place pieces as fast as possible. Lines must obviously be manageable however or they will top out and lose.

I’m not familiar with the TGM community, but I got a rivalry impression between the two competitors for this race. SQR is the foreign machine, while Qlex more of the hometown hero. In full disclosure, my mind may have just made this up for dramatic effect. Either way, the race is nothing short of mind blowing to watch, and finishes in a very clutch moment. This race is followed by several other exhibitions including a double race, one-handed doubles, and a very cool item mode (which generates random helping or hindering blocks that affect your stack).

Castlevania: Symphony of the Night
Castlevania is a classic speed run series, and just about any title is entertaining to watch runners dash through. This year’s SotN was unlocked via donation incentives, meaning viewers had to donate a certain amount to include it. dr4gonblitz and romscout race all bosses category Richter, which is the character both will be using. The abilities of the different playable characters in most Castlevania games make the route so different that each has their own category for time, as we see here. All boses simply means that in addition to finishing the game, they must first defeat every boss available. The two runners have a friendly rivalry that adds to the entertainment of this run, and is finished with a tradition of singing the closing credits song.

Prince of Persia: Sands of Time
Breaking games (that is, exploiting design or coding flaws in an adventageous manner) is not uncommon in speed runs, but Sands of Time is one of the more technical that I’ve seen. Many of the tricks involve precise placement and an intricate character movement to initiate a zip - an exploit that launches the character in a certain way to skip parts of the level. In many cases, the Prince ends up out of bounds, which means he is outside of intended playable region of the level. The runner must then return in bounds to continue the level, and in this case often times without very good visual cues. Watching these exploits is entertaining in its own right, but as you can imagine things often go wrong, either due to bad luck (commonly referred to as RNG, random number generator) or small window of opportunity. Henneko’s run is plagued with such luck, and he deals with it in stride and composure in such a fashion that even chat takes notice, and start to show their support through donations. Henneko also does a great job of explaining his tricks throughout the run. Great execution in combination with an overwhelming crowd response makes this run a must watch. #hugsforhenneko

Legend of Zelda: Ocarina of Time
“Okay I just beat Gohma, and now I’m at Ganon.” This is paraphrased, but essentially the case with the exploited any% ( a category of the speed runs in which the objective is to just beat the game) run of OoT. My seven-year-old has been playing through the 3DS version of OoT, and like all of us has put a lot of hours in and is still working towards thwarting the Gerudo king. He had the same speechless reaction I had when I first saw this run. Jodenstone’s run at SGDQ gets especially poor RNG luck with item drops that kills the estimate, but with the audiences' support pulls through and brings it together in the end.

Mario Kart 64
Its safe to say that an easy way to my favorites list is when a run that I don’t have much interest in completely surprises me. Mario Kart is another example of this. We put just as many hours into getting gold cups and popping balloons as the next kid, but I’m not usually a fan of racing games and I assumed that the run would be optimized just by driving well. In reality, there are only a handful of tracks in which abney317 doesn’t manipulate in some manner. Watching him bounce off of competitors and exploit the Lakitu referee had the twelve year old me in awe. Abney also hits some amusing banana luck on the last track of the run, the infamous Rainbow Road.

Bionic Commando: Rearmed 2
Another title that I had not seen a run of before. The style of BC lends itself very well to runners, and Rearmed 2 in particular is designed in such a way that it can be exploited in several areas, usually resulting in a few laughs. PJ and company provide excellent commentary throughout his 100% run (meaning he must obtain all collectables), not only with impromptu jokes but also details about the story, game, and tricks being performed. A live donation incentive is created at the beginning of the run, affectionately referred to as “hype percent”. PJ has the ability to exploit one of the main character’s attacks, specifically the yell that accompanies it, so that it continues throughout the level. Viewers can donate for either yelling or silence and spoiler: the former wins by far.

Pokémon Blue
I’ve watched several any% runs of Pokemon, but this was my first 151 - meaning the runner must catch all 151 Pokemon and beat the Elite Four. You will likely be skeptical when you see the two hour estimate, and to an extent you’re right to be. Shenangans uses in-game glitches and exploits to complete a good portion of the Pokedex, especially for version-specific monsters. However, there are still plenty that are caught the old fashion way, optimized with routing and encounter manipulation. The glitches are nonetheless impressive to watch and the run is one of the best examples of breaking the game I’ve ever seen. As an example of how important execution is when toying with the insides of Game Freak’s code, there is a ten or so minute window of menuing in which Shenangans is exploiting code and one error means the game will crash. I was also amused that one of the more difficult Pokemon for him to catch in this run turns out to be a Zubat.

...and many more
These are just a few of the runs that I enjoyed throughout the marathon, but with over a week of non-stop gaming there is sure to be something that you’ll enjoy. I recommend giving their Youtube channel a browse for anything that jumps out. You can find it here. If you enjoyed watching these runs, they are even more fun to watch live. Games Done Quick’s next event will be coming up in the beginning of 2016, I will be sure to post more information as it becomes available.

We have 1397 guests and one member online