Rise of the Online Gaming PC

Multi-player game play has been a feature of video games that has seen as much of an evolution as the industry itself. It's existed since the early days of the Atari, but recently with the new wave of hardware and software advancements, we've seen both consumers and developers alike scrambling to put together the best multi-player experience possible. Partnered with new Internet connection speeds that are more readily available to the mass public than ever before, the possibilities are indeed endless.

Major companies such as Sony and Microsoft are, of course, doing their best to capitalize online, providing the hardware enhancements and programs such as Xbox Live or the Playstation Network, but there are those who decide to build their own rig, install their own hardware, and upgrade their own programs for online play. I talk of the PC gamer, and today we'll look at what they do to optimize their systems, making sure they are running the fastest and as efficient as possible.

The most fundamental area, whether it be for casual use or gaming, is hardware. Of course, there are several differences that exist between those two genres, the most of which are processing power and graphics. Casual use would be defined as writing and viewing documents, listening to music, surfing the Internet, and maybe playing to occasional low-profile game here or there (solitaire, Pac-Man, etc.). For a system like this, you'd be more than comfortable getting away with an integrated graphics card, easily upgradable if you find yourself wanting to play the Sims or watch a movie.

A processor would also be a lower speed, and probably a single core. Without dipping too far into the subject, a processor is measured in hertz, or how long it takes for it to send and receive a signal. One hertz in one second. Multicore processors simply share workload, obviously for those who are putting more stress on their system than just Minesweeper.

So when you make the jump to a gaming PC, you'll need to install a better video card with a large memory cache, depending on how wide of a range of games you want to play. If you know what the most demanding game you'll ever play on the system requires, you can simply buy a card that supports it and never have to worry about it. However, since graphics are always improving, so are the video cards, which is why PC gamers are constantly upgrading their hardware. The processor will also probably be double the amount of a casual rig, and multi-core, especially if you'll be running any applications in the background during game play. Memory is another mentionable aspect, the latter of the two requiring more RAM than the former, and a faster RPM hard drive to boot from. Of course, you'll also need the writable capacity to hold the game installs.

For an online gaming PC, there are a few more components that will need upgraded. If playing a game is the most stressful activity you'll put your system through, playing that game online pushes it even further. And more load means more heat, so you'll often find a user's build consisting of higher quality hardware and more effecient cooling.

Before you begin upgrading your rig for the online realm, there are a few things to keep in mind. We'll start by continuing our coverage of hardware. It's a popular belief that the more you spend, the more you get when you buy anything, and gaming is no exception. Though there is some truth to the statement, it's not quite as black and white as that. Sean McCann, Senior Product Marketing Manager for Bigfoot Networks, says there is no direct relationship. Most people will pay around $100 for a video card that will play the majority of games, though there are those who will pay around $50 more to get 50% more out of the card. From there, the scale tails off to include a few outlier results of peope paying $300 to $400 for a minor improvement in one area.

McCann also notes on the nature of online gaming. "Online gamers are more social, therefore they are more likely to have a family, and so hardware orientated decisions are being changed to experience oriented decisions." For instance, 'I need to get a pair of headphones I can hear over my kids' or 'My wife will kill me if I spend too much on this build'. Companies are taking this into consideration, and of course as demand for accessories such as those mentioned above increase, prices decrease,

The morale of the story is that its possible to build or upgrade a system without running your bank account dry, so be aware of parts that may be overpriced and avoid paying for something you don't need. It isn't always easy, however, to determine what you do and do not need, and nothing is more frustrating than having lag issues when you don't know why. The next objective is to prevent and cure latency issues. 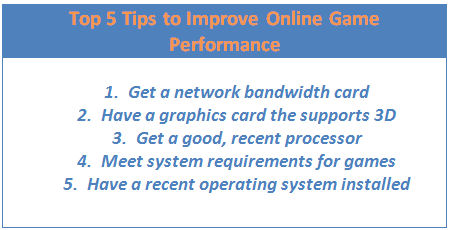 Latency is, simply put, the amount of time it takes for a packet of data to to cross over a network from one user to another. Since this is the very basis of online play, ensuring a smooth transfer is essential. The first, and most obvious, is a user's Internet connection. Running at average dial-up speed, which is 56Kbps (meaning 56 kilobytes of information is transmitted per second), is going to hold you back in the vast majority of online games. You need to communicate with the game's server to tell it what you're doing and get the appropriate reaction, and the longer it takes for that information to send, the slower you're going to be. Compare that to a standard DSL connection, 1.5Mbps, or 1536Kbps, and its easy to see why Internet speed is important.

That being said, it isn't the only factor. Many gamers who experience lag immediately assume they need a faster connection, and this isn't always the case. Lag experienced on the user end is largely generated by Windows or other operating systems, which take instructions and attempt to sort them out in a fairly rudimentary fashion. The problem occurs when the OS is issued several sets of instructions, does a poor job of distributing the workload (even on multi-core processors), and curdles the data. McCann explains: "Even though quad core exists, many games still perform on one. The idea is to spread the the workload between cores. A first person shooter may say you're dead, then the grenade goes off." Its an issue with the speed and frequency from the user's hardware itself, not the network connection. So upgrading an Internet connection is like "taking a bike or a Ferarri on a bumpy road. The road is just as bumpy with either one, it's just one goes over it faster."

The answer to this issue is upgrading your own hardware. As mentioned before, having a multi-core processor will help some, but it won't do any good if Windows is distributing network activity poorly. The solution hides in a piece of equipment that is often overlooked: the network card. Every motherboard has an integrated network device that allows for the computer to be connected to a network. However, upgrading to a dedicated card will not only improve LAN speeds (older models, and some newer models as well max out at 100Mbps instead of 1000Mbps), it can also help you operating system with its load. Take Bigfoot Network's Killer line, network cards that are optimized for gaming, for example. The Killer technology will alleviate Windows of the task collecting data to help smooth and accelerate the process. As McCann puts it, "If a packet comes in for a game, it goes directly to the game." It doesn't have to worry about other processes like Windows does, therefore it doesn't wait in line while the OS deals with other data first and places the game data in a queue line. 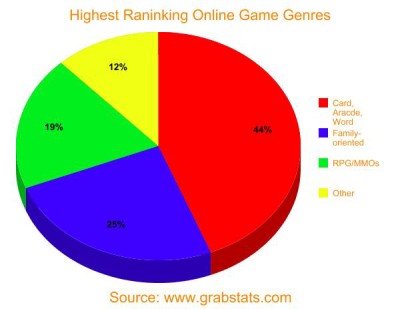 Still lingering in the hardware realm, online gamer's also tend to be more particuliar about their accessories. Mouse, keyboard, head set, monitor, and even the mouse pad are only a few of the more popular pieces to customize. A gamer may choose a mouse depending on wired/wireless, its size and how it fits his hand, the option of customizable buttons, and sensitivity control. Keyboards may depend on the size, type cushion, and additional features such as USB ports or a small LCD screen to read out information, or extra comman-assignable keys. It may even be something as simple as matching a style for those who do themed cases. The mouse pad can be made of virtually and material and of any size, and will vary greatly depending on the preferences of the user, type of game (first-person shooter, real-time strategy, role-playing game, etc.), and location. This is an aspect that you as a gamer will learn your needs through trial and error, and develop an equipment set that works best for you.

This article is only the tip of the iceberg when it comes to the online gaming PC, an element that has grown rapidly in the past few years and is only continuing to gain momentum. It is a beast that will ever be evolving, and as long as the gamer continues to defy the stereotype of the anti-social awkward nerd, will continue to thrive. Given the preceding information, you should now have a good understanding of the hardware you'll need, the equipment you'll want, and the problems you'll need to solve. From here, its nothing more than a learning experience, so grab your PC and your mouse and jump in!

Author: Lersar
Contributing Editor / Event Staff
Adam is a big proponent of LAN parties, esports and speed-running, and helps organize our semi-annual LAN events. He has covered hardware and software reviews of a wide variety, but most content these days come from event coverage, such as other LAN parties.
Discuss this article
Log in to comment
Posts in discussion: Rise of the Online Gaming PC