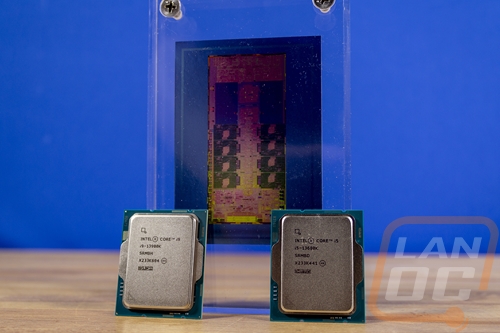 Onboard performance isn’t something that you think about when it comes to high-end CPUs because I think the expectation is that you will be adding a dedicated GPU but there are situations where a dedicated GPU isn’t needed or you may need to run the integrated graphics while waiting on your video card to come in or be replaced. So I do still want to check out the performance of both the i9-13900K and the i5-13600K when it comes to integrated GPU performance. For that, I have run a few basic tests with a mix of older and newer games and benchmarks. Integrated GPUs aren’t anywhere near the performance of even the lowest-end GPUs but it is still interesting to see what they can do. To start that I went with the older Cinebench R15 which has an OpenGL benchmark showing basic rendering performance. The 7000 series of Ryzen CPUs are still at the top in Cinebench but the i9-13900K did get very close to catching back up with its score of just under 101 FPS. The 13600K improved by 4 FPS over the 12600K which put it 2 FPS behind the 12900K. 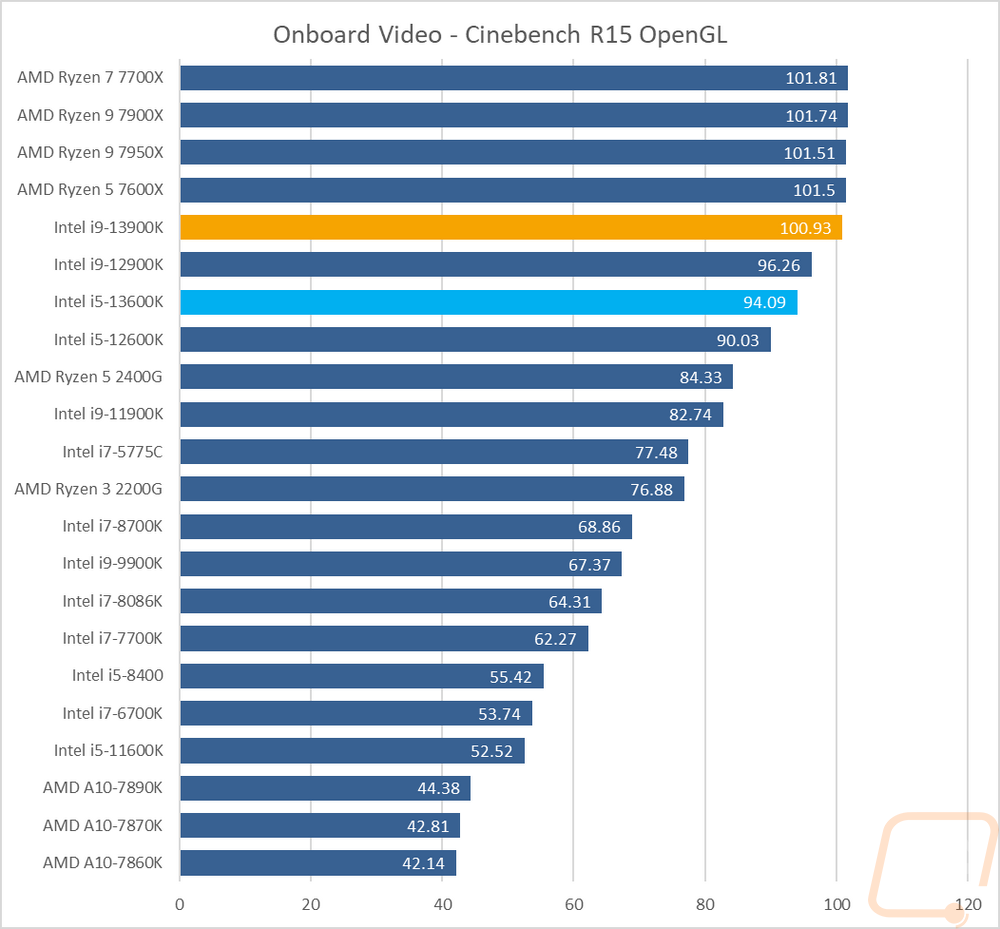 Next, I defaulted to the always consistent 3DMark with both the older Fire Strike benchmark and the newer Time Spy which is DX12. I only used the graphics score, not the total score to take the CPU performance out of the equation as much as possible. The CPU clock speed improvements and the small iGPU clock speed improvement didn’t translate to much of a change in the graphics score in Fire Strike for the 13900K compared to the 12900K but the 13600K on the other hand saw a larger jump ahead of the 13600K. In Time Spy however, the 13900K saw a larger jump and the 13600K is nearly caught up to the graphics score of the 12900K. 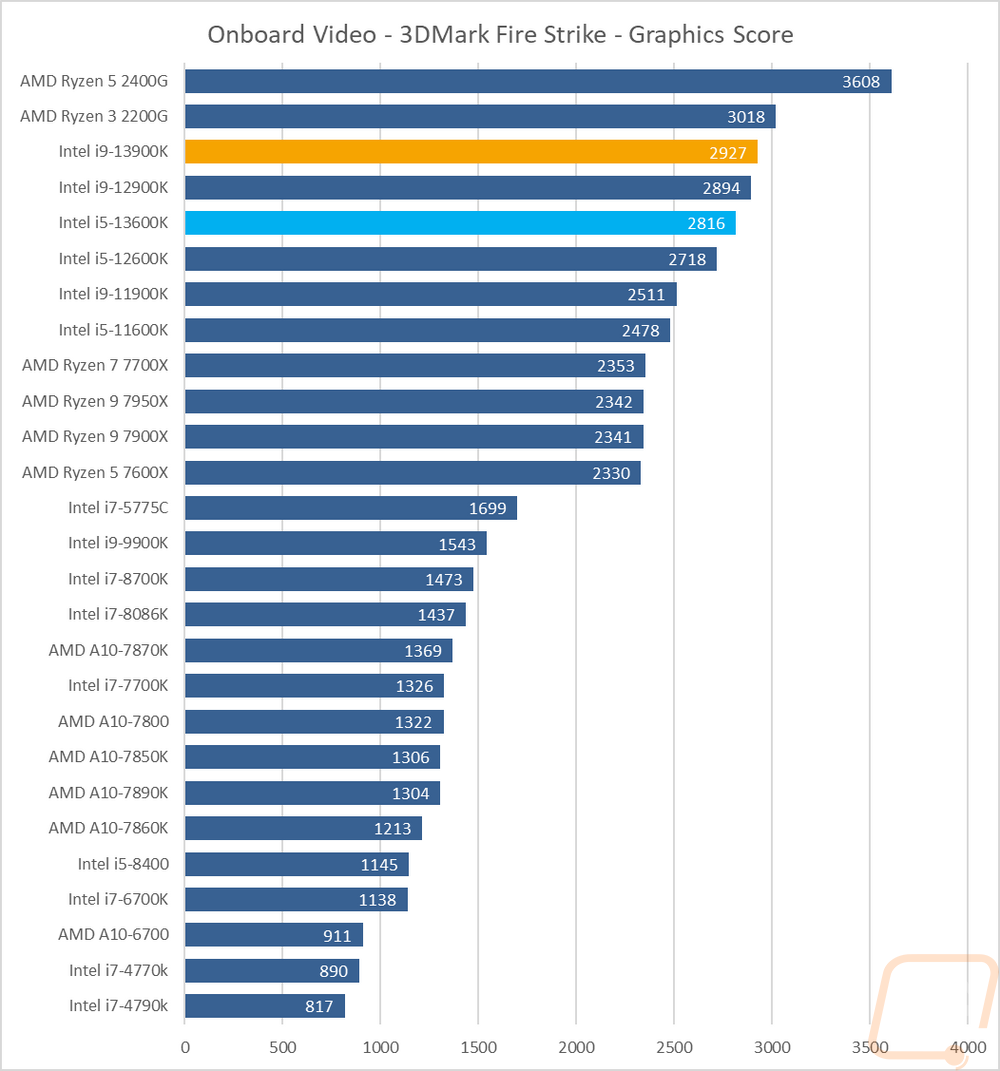 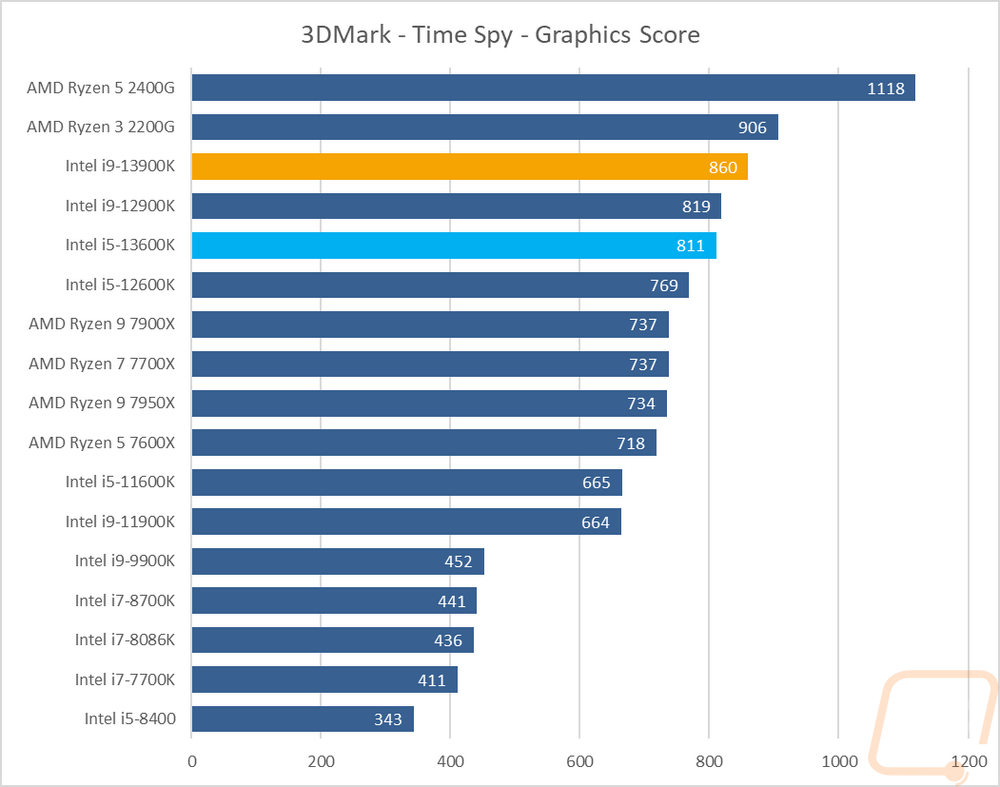 In Unigine Superposition I ran the 1080p medium detail and 720p low detail tests. The 13900K saw a decent performance improvement over the 12900K but it wasn’t enough to catch up to the older Ryzen APUs. The 13600K on the other hand saw an even bigger improvement which put it over the 12900K at 1080p Medium detail and closed in the 720p low detail test as well. 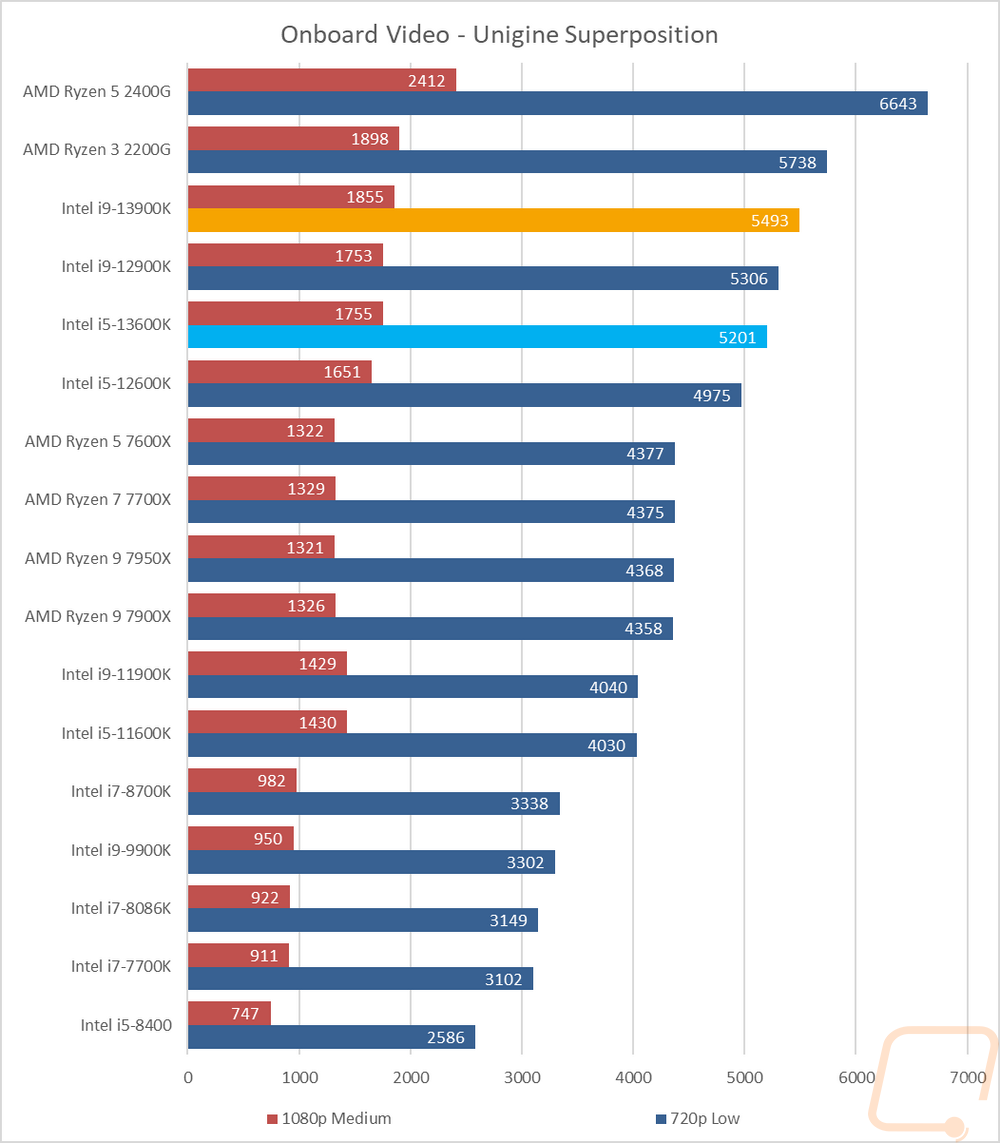 Then from there on, I jumped into game tests. Some of our tests are older games but I did also add in a few newer games as well to get an idea of newer games when tested at 1080p and low or medium settings. Both of the 13th Gen CPUs managed to improve on the performance seen in the 12th gen CPUs with both CPUs having higher iGPU clock speeds but the same UHD770 graphics. That combined with the faster CPU performance helped in all of the games. In TF2 it wasn’t enough to catch up to what AMD has going on but in Ghost Recon Wildlands both 13th gen CPUs were at the top. In Shadow of the Tomb Raider and Hitman Absolution the 13th Gen CPUs didn’t surpass the Ryzen performance but at least in SotTR the 13900K was closer at 21 FPS to 23 FPS on all four of the new 7000 Series Ryzen CPUs. 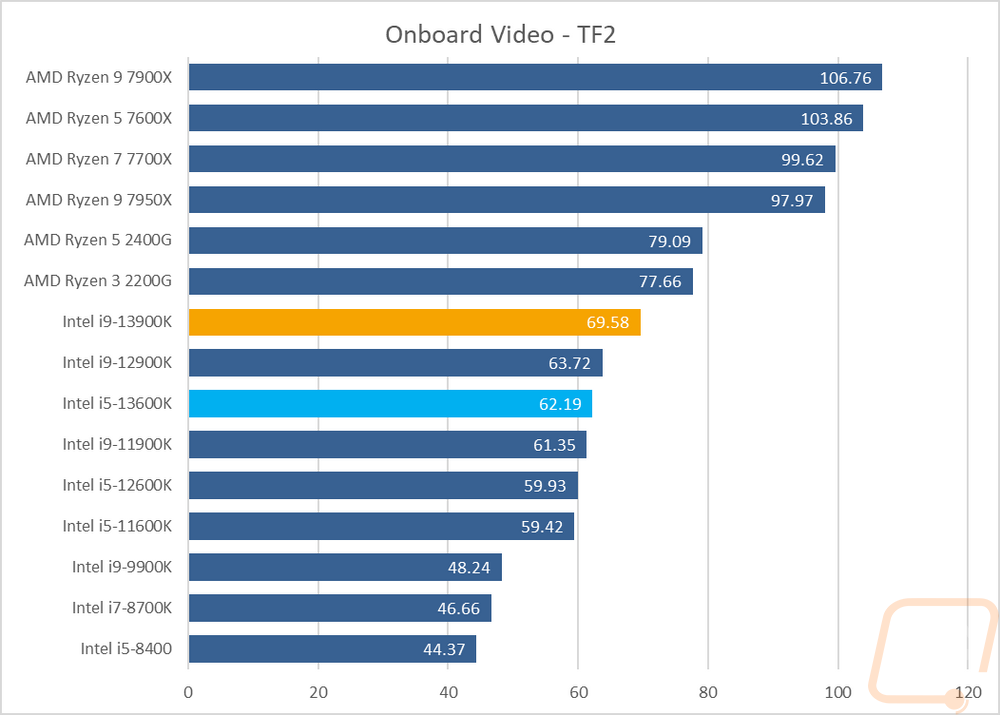 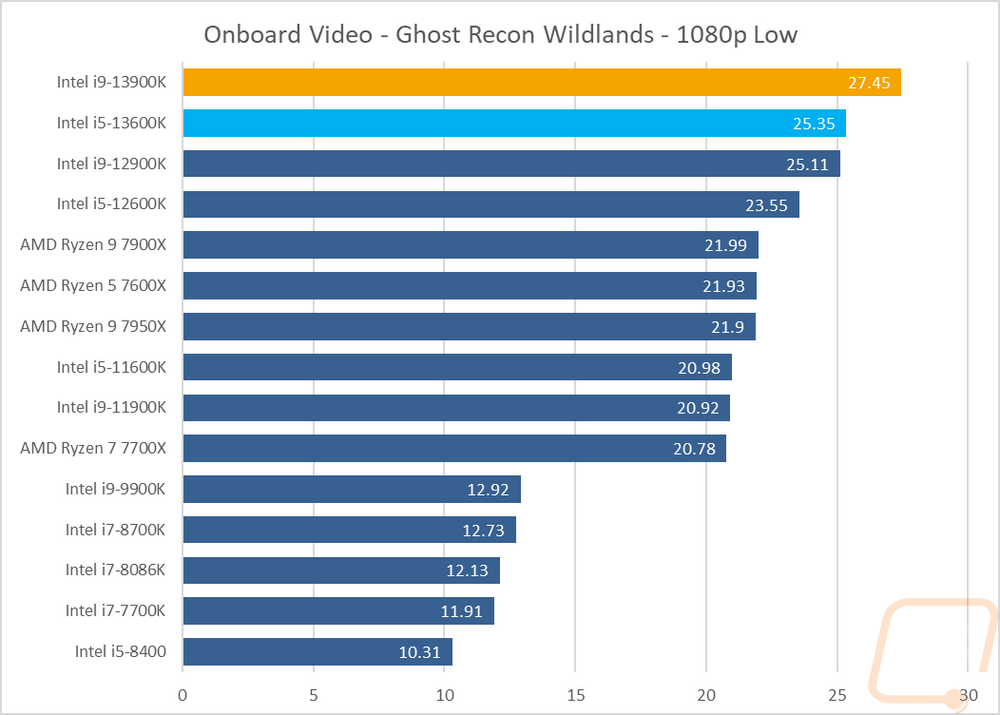 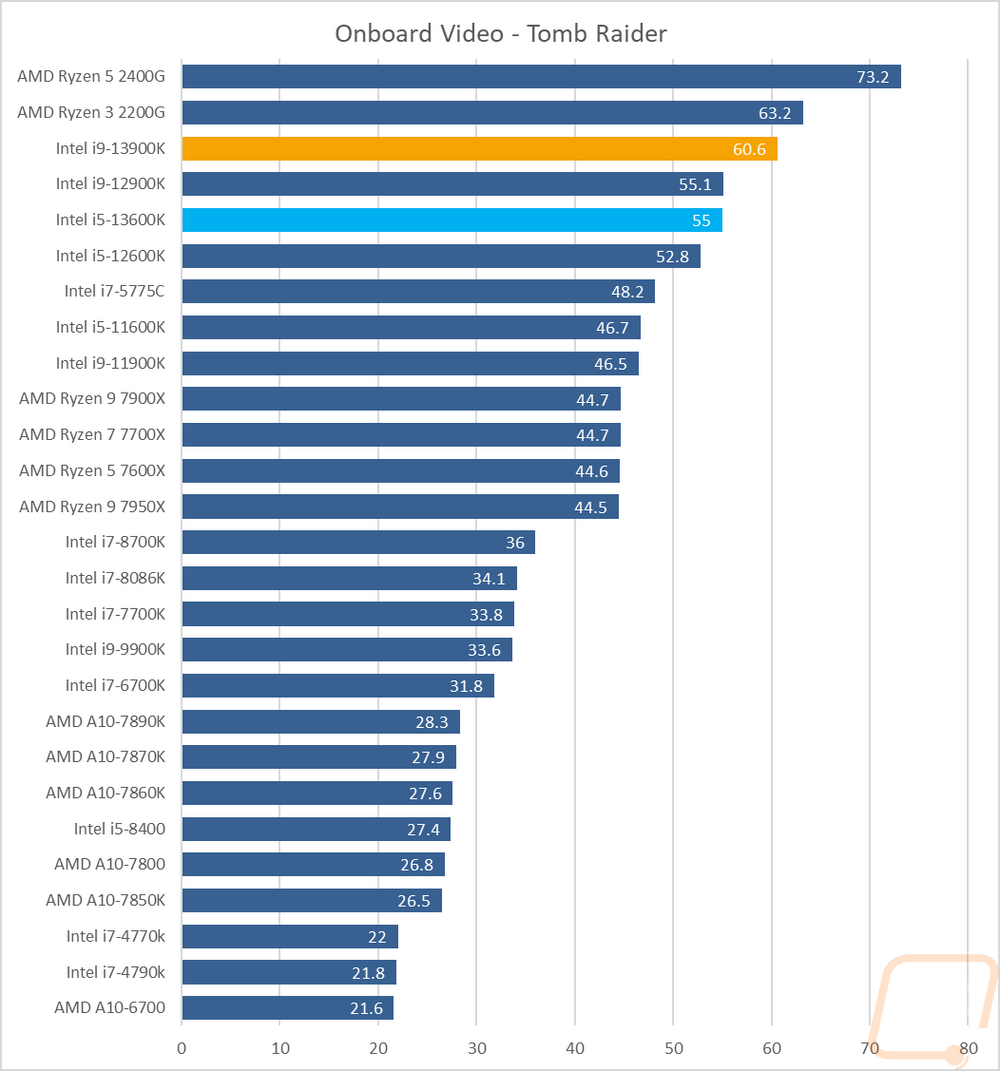 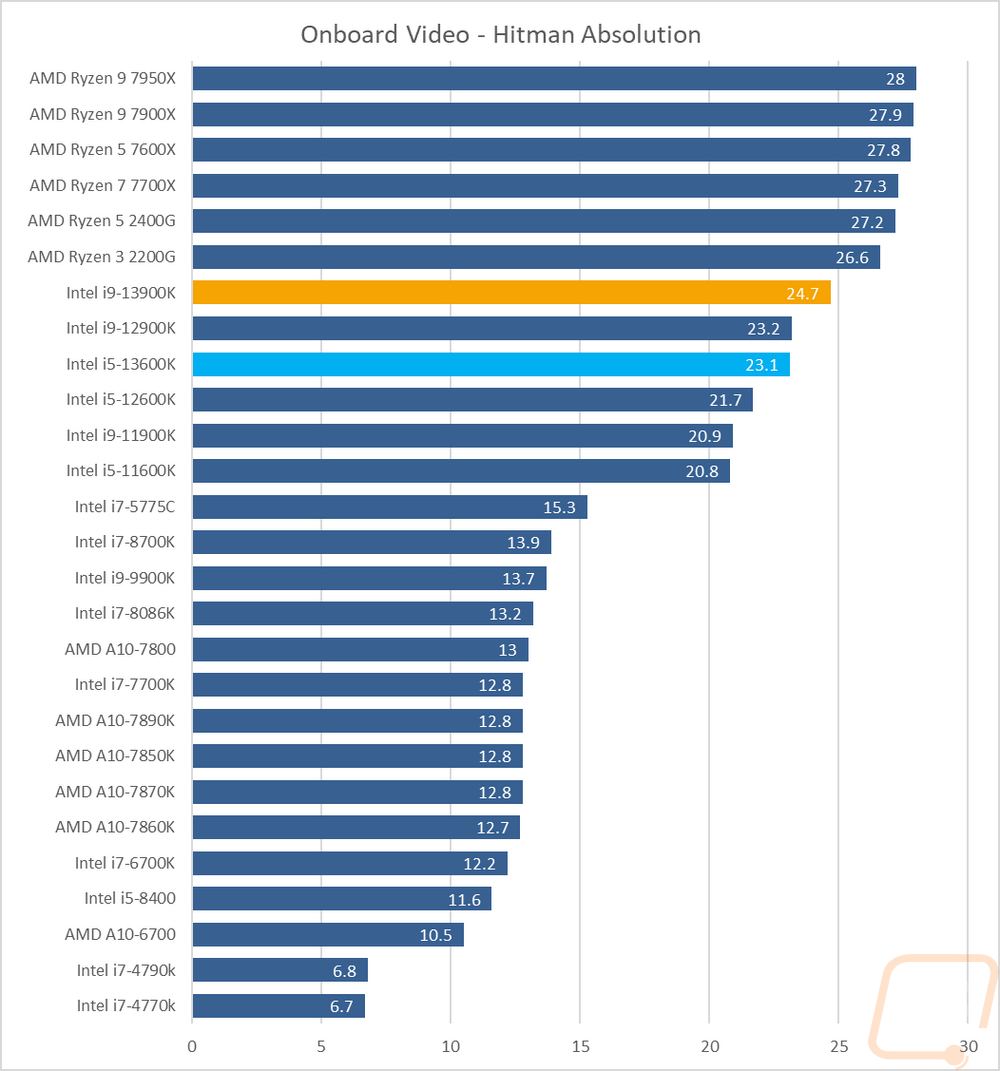 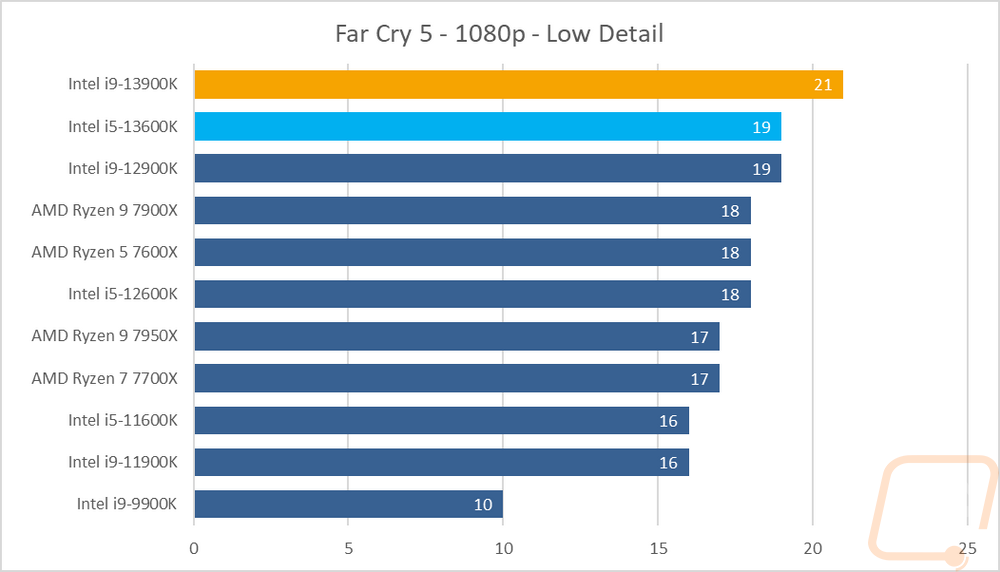 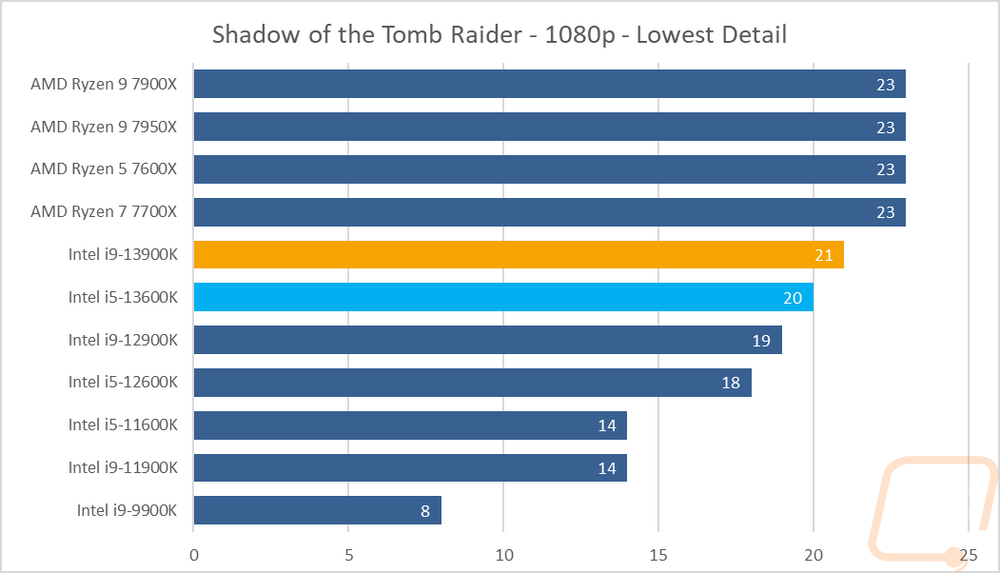