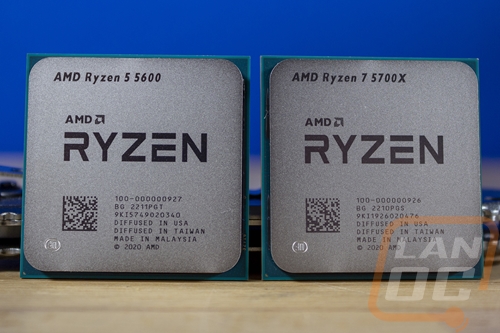 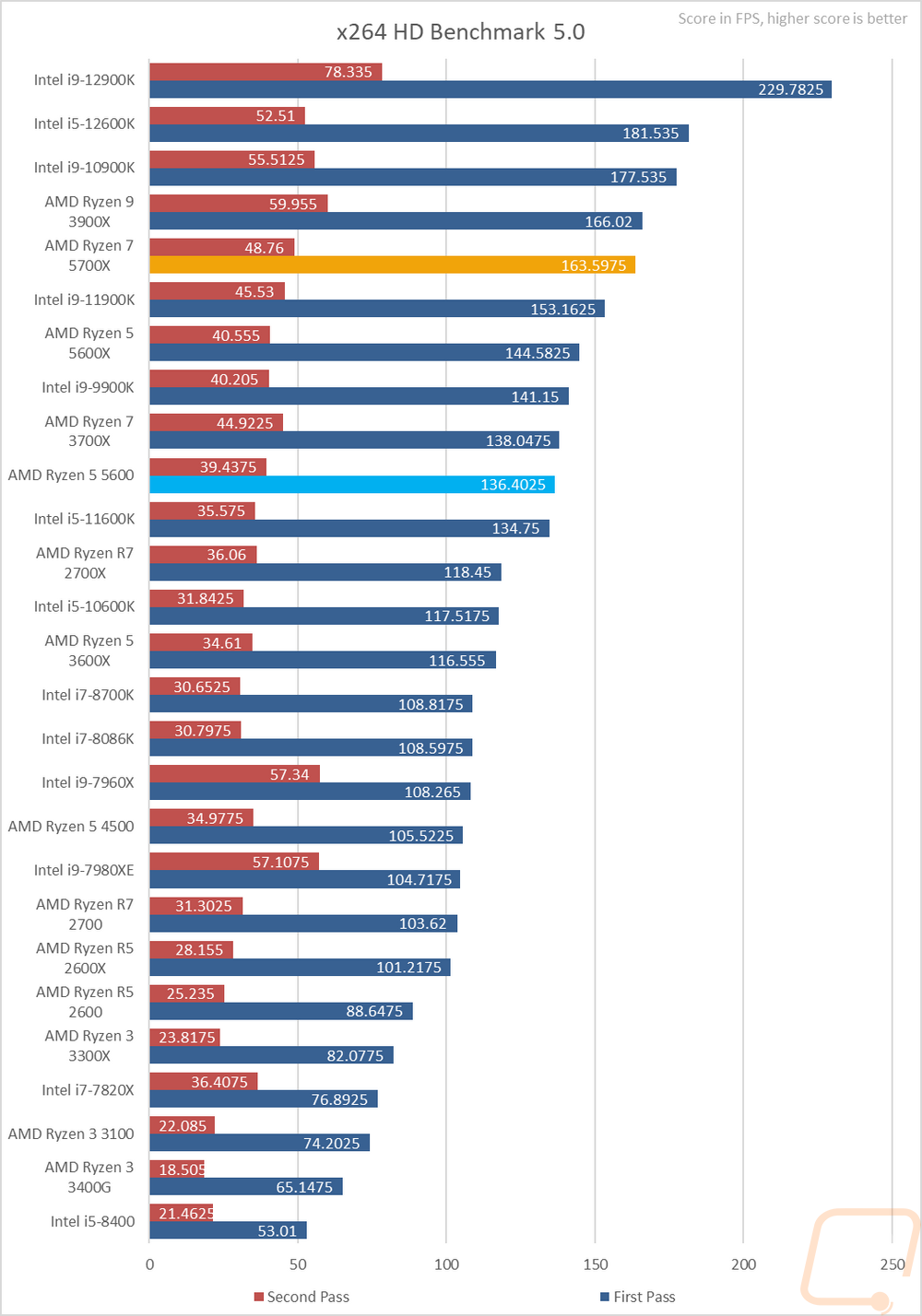 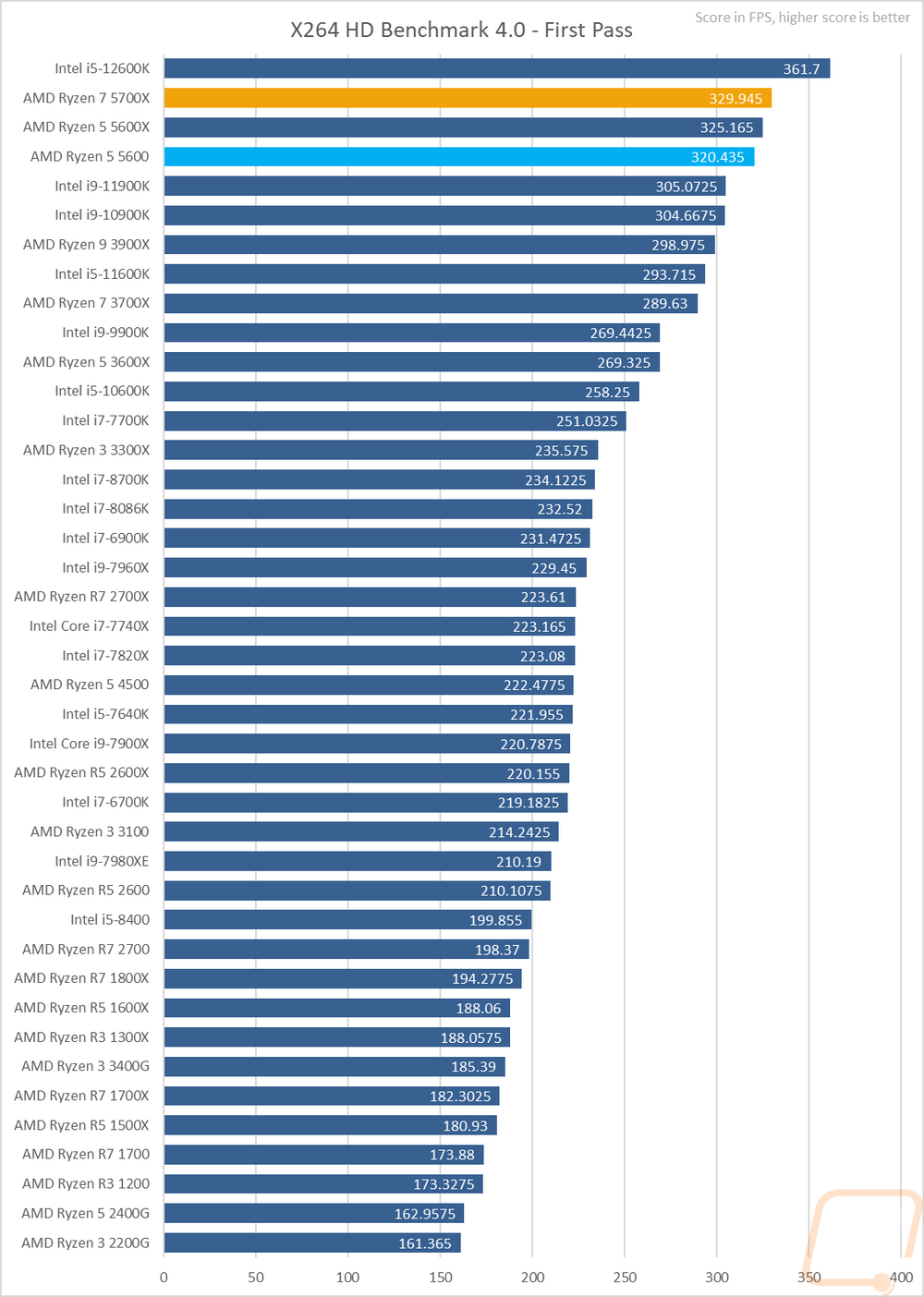 Our next benchmark was still focused on rendering but this time 3D rendering in the always popular Blender. This benchmark was recently updated so our result list is smaller here. I have all three tests stacked together so we can see an overall of them altogether. Blender loves the higher core counts so the older 3900X did well here. The 5700X outperformed the 11900K when all of the results were combined but was slower in the monster test that the graph is sorted in. The 6 core CPUs then have a big step down and the 5600 isn’t far behind the 5600X.

Continuing with the video encoding theme I also have handbrake which is an open-source transcoder. For this test I am taking a 4k video down to 1080p 30 FPS, the results are the average FPS of that task. The 5700X came in just behind the 10900K which shows how AMDs current mid-range is running right with Intel's flagships from a few years ago. The 5600 is right with last year's 11600K as well but I was surprised how much the clock speed difference between the 5600X and the 5600 made a difference here with it at 68.4 FPS vs 64.3 on the 5600. 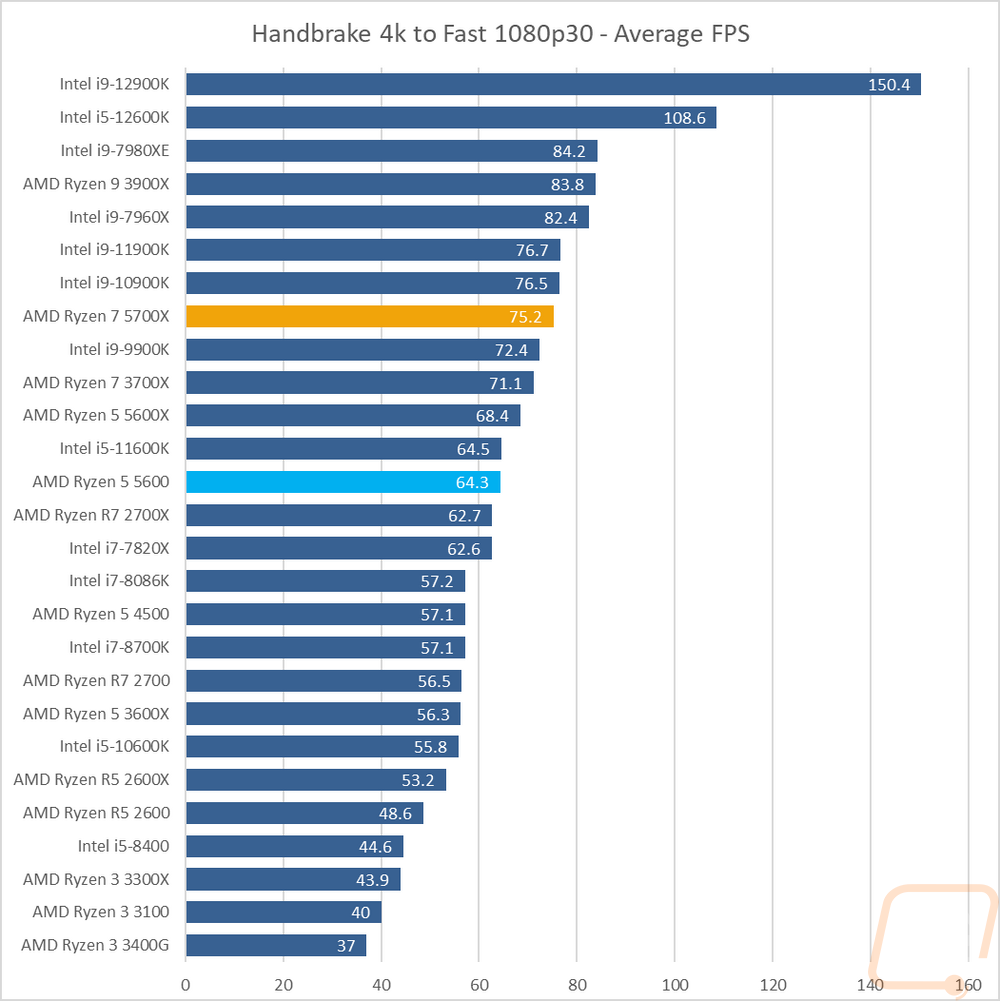 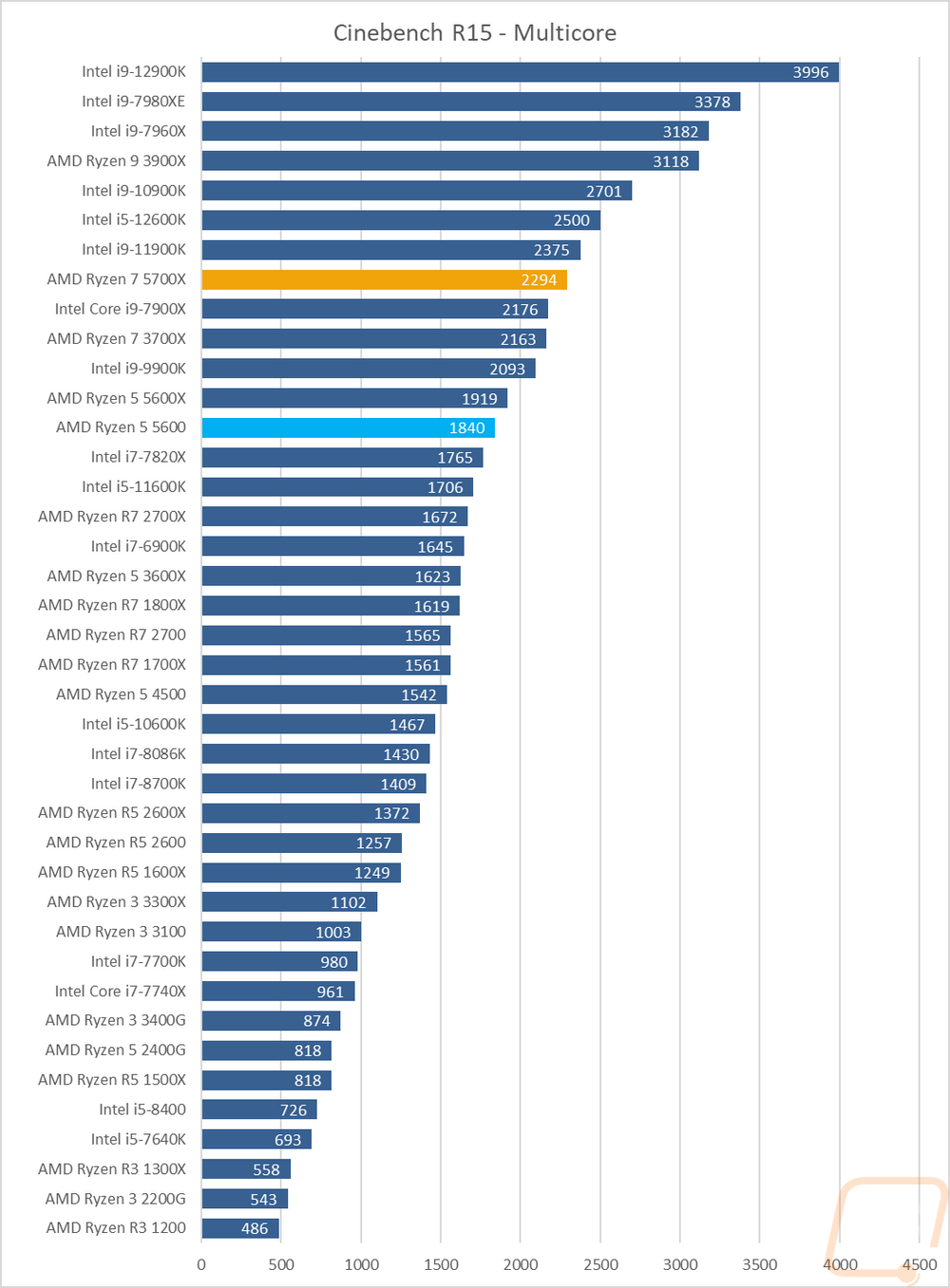 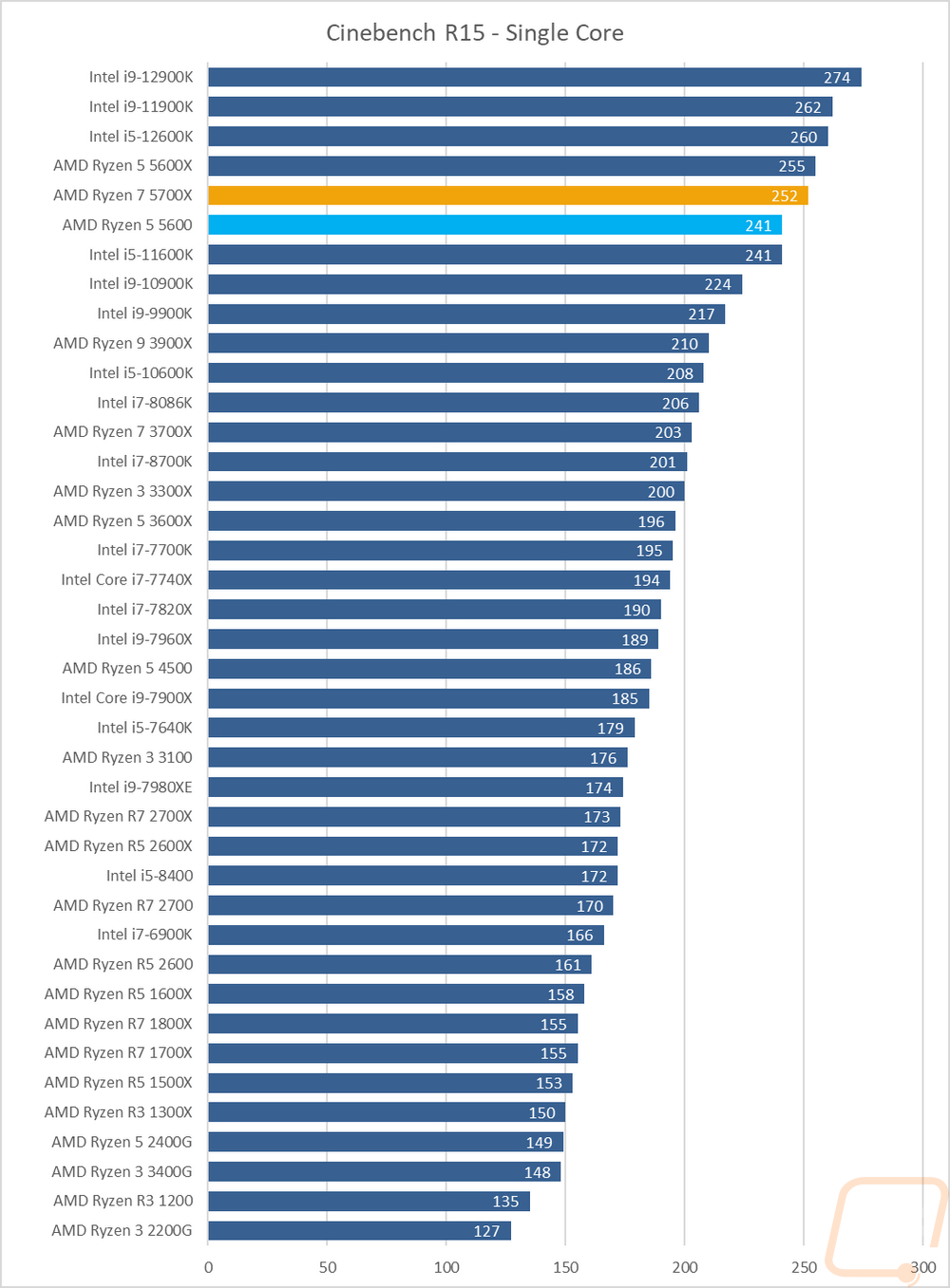 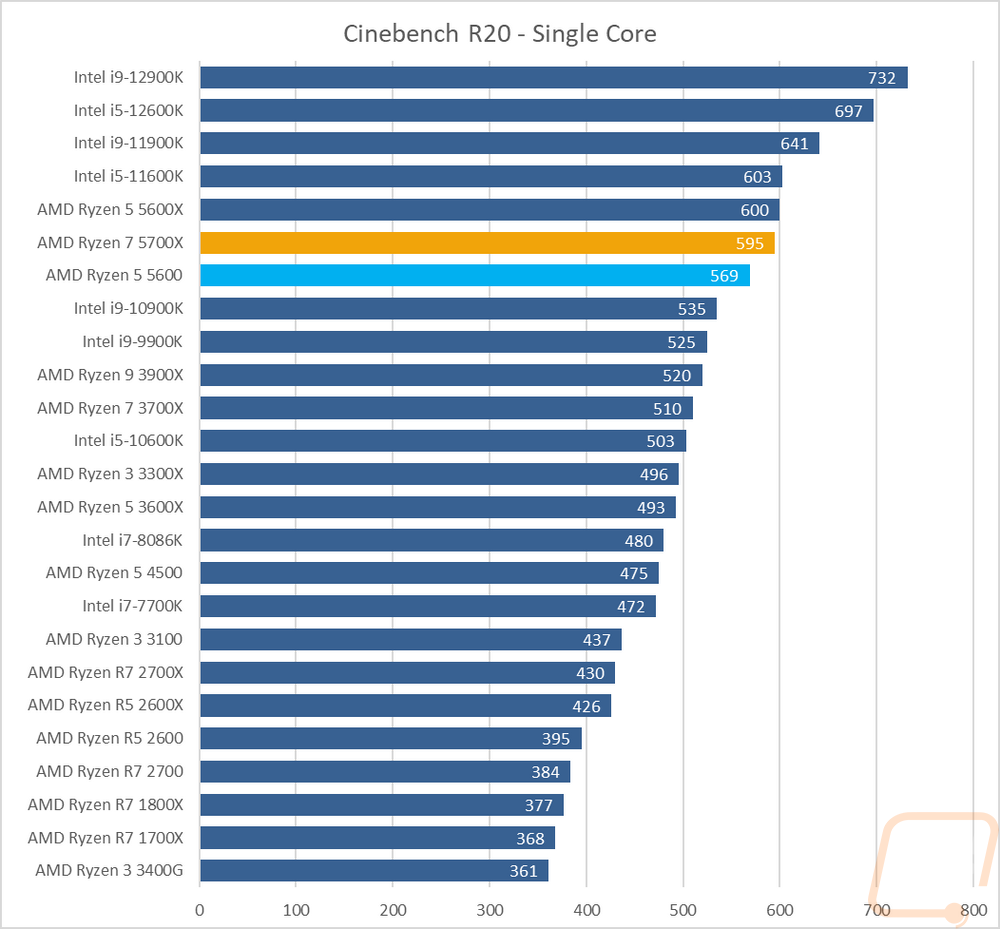 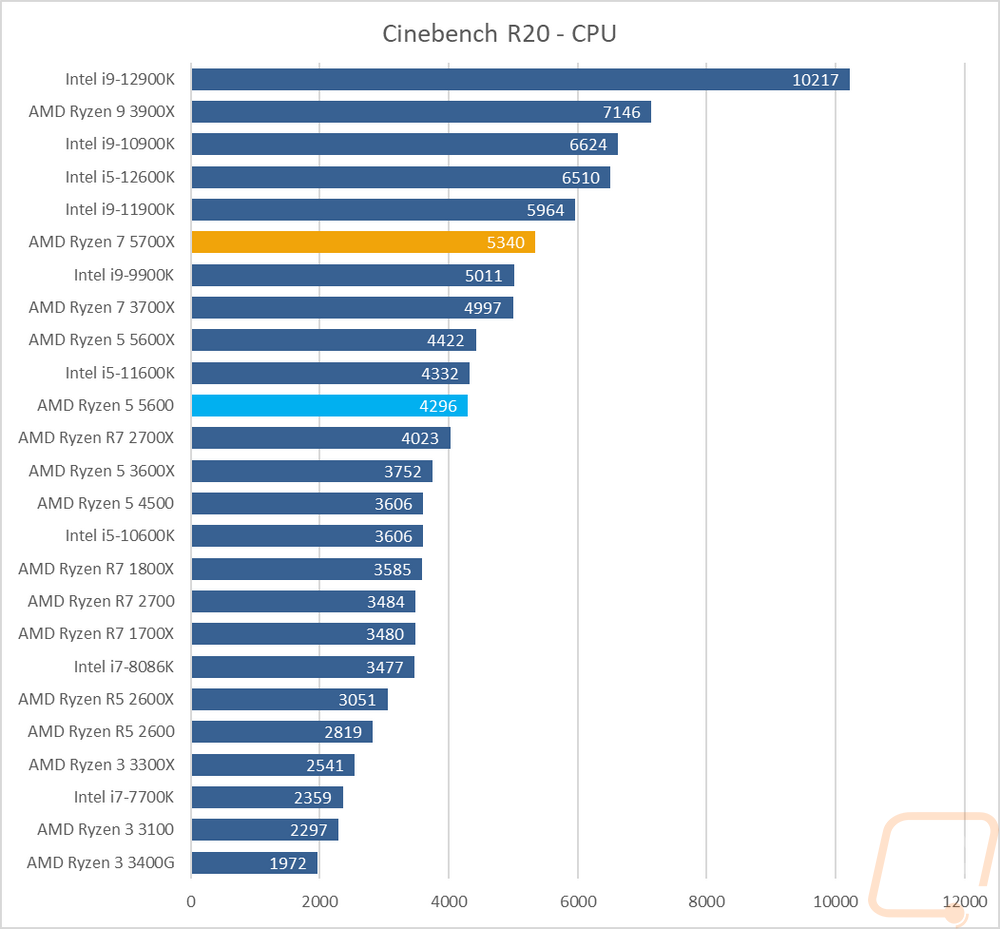 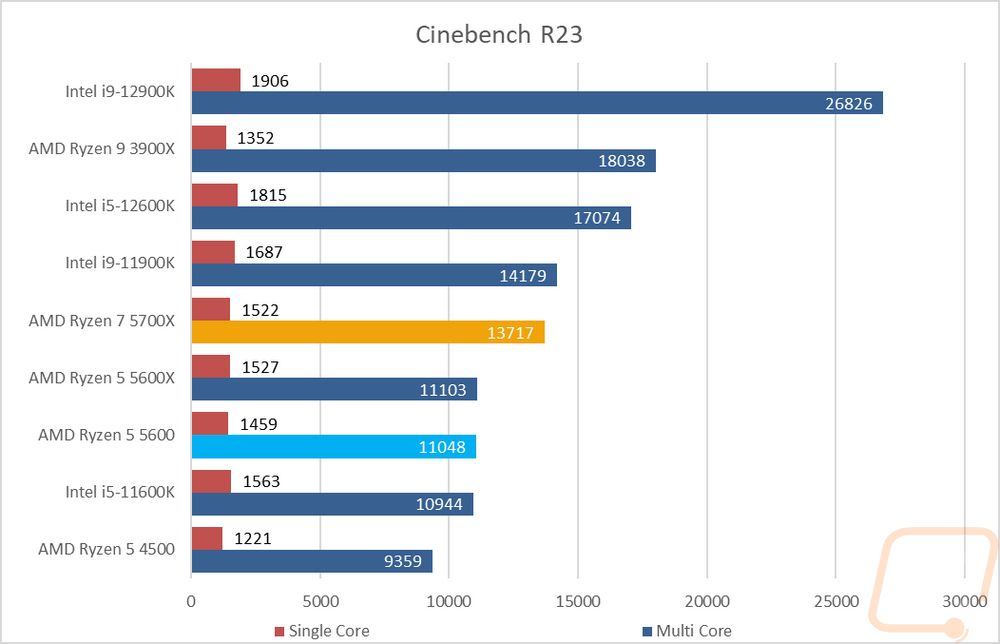 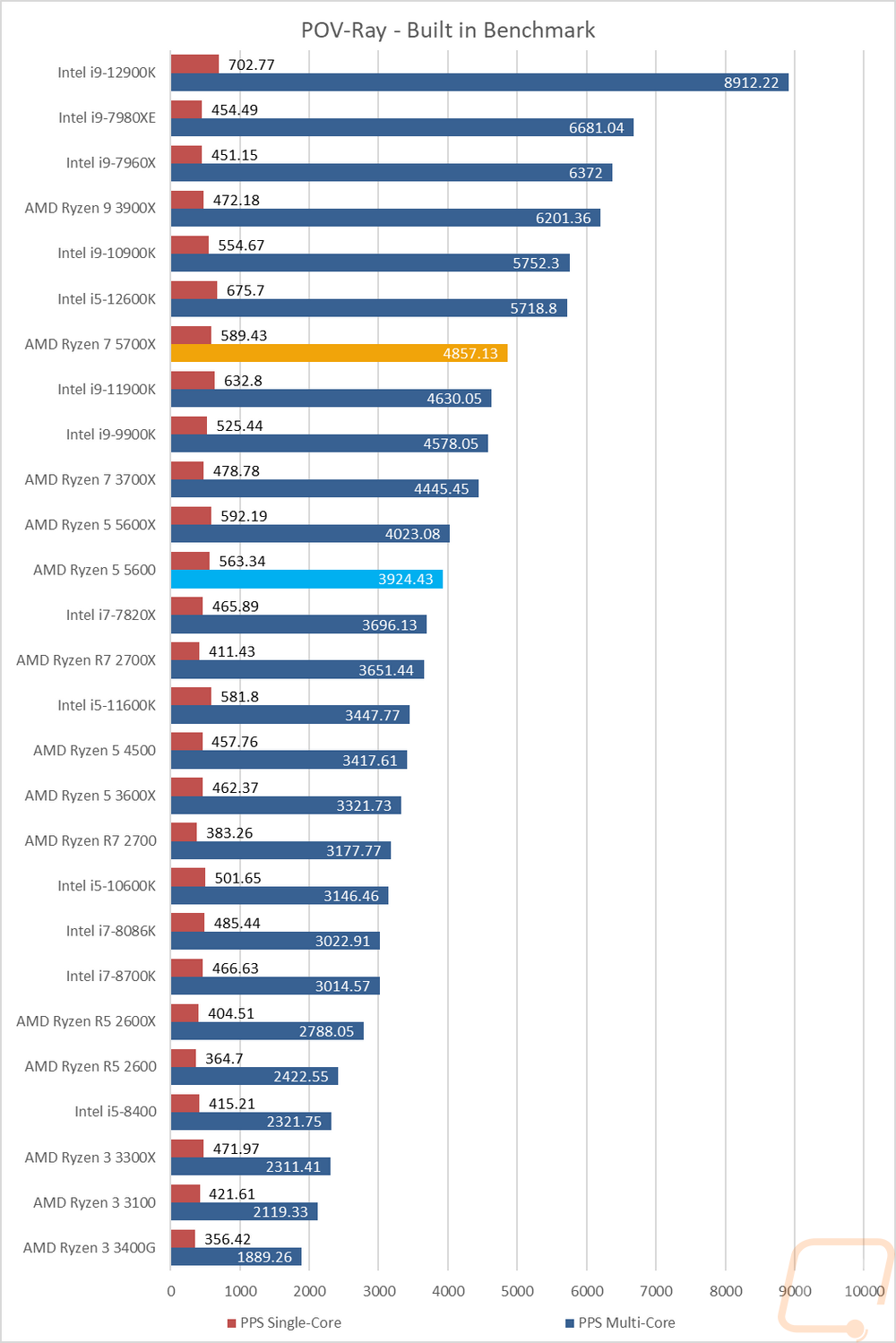 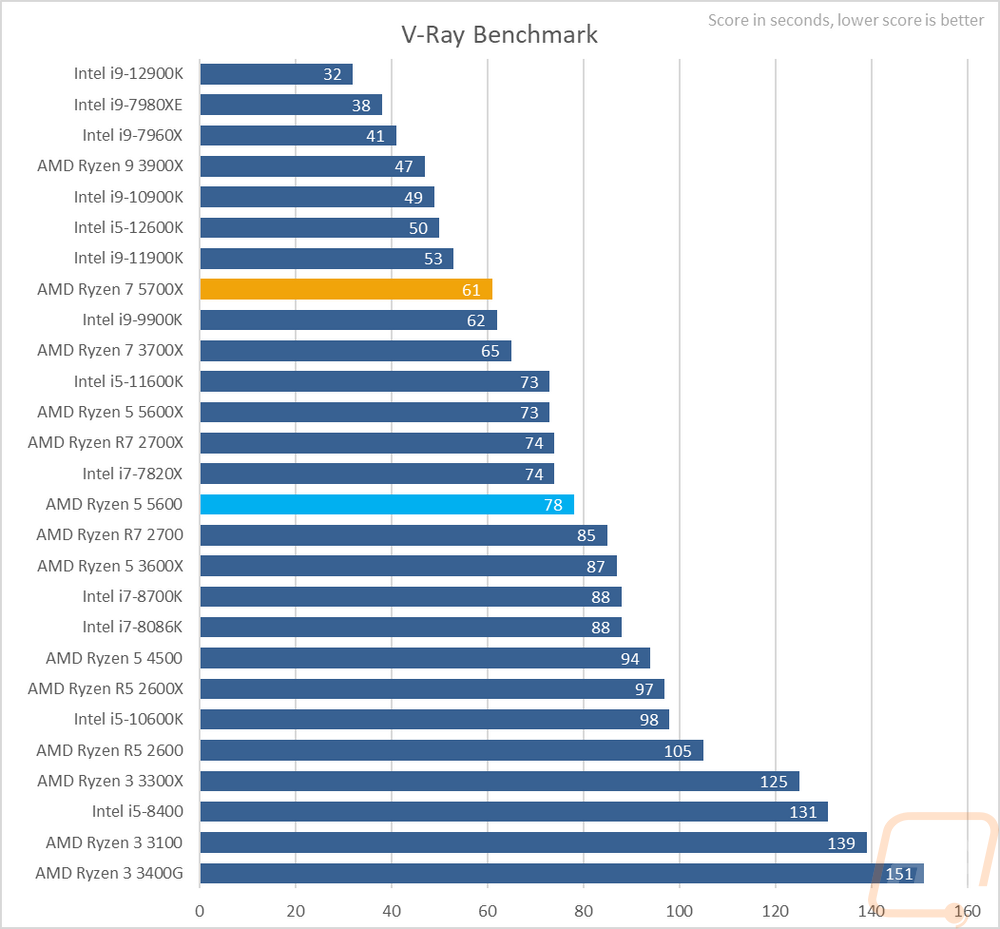 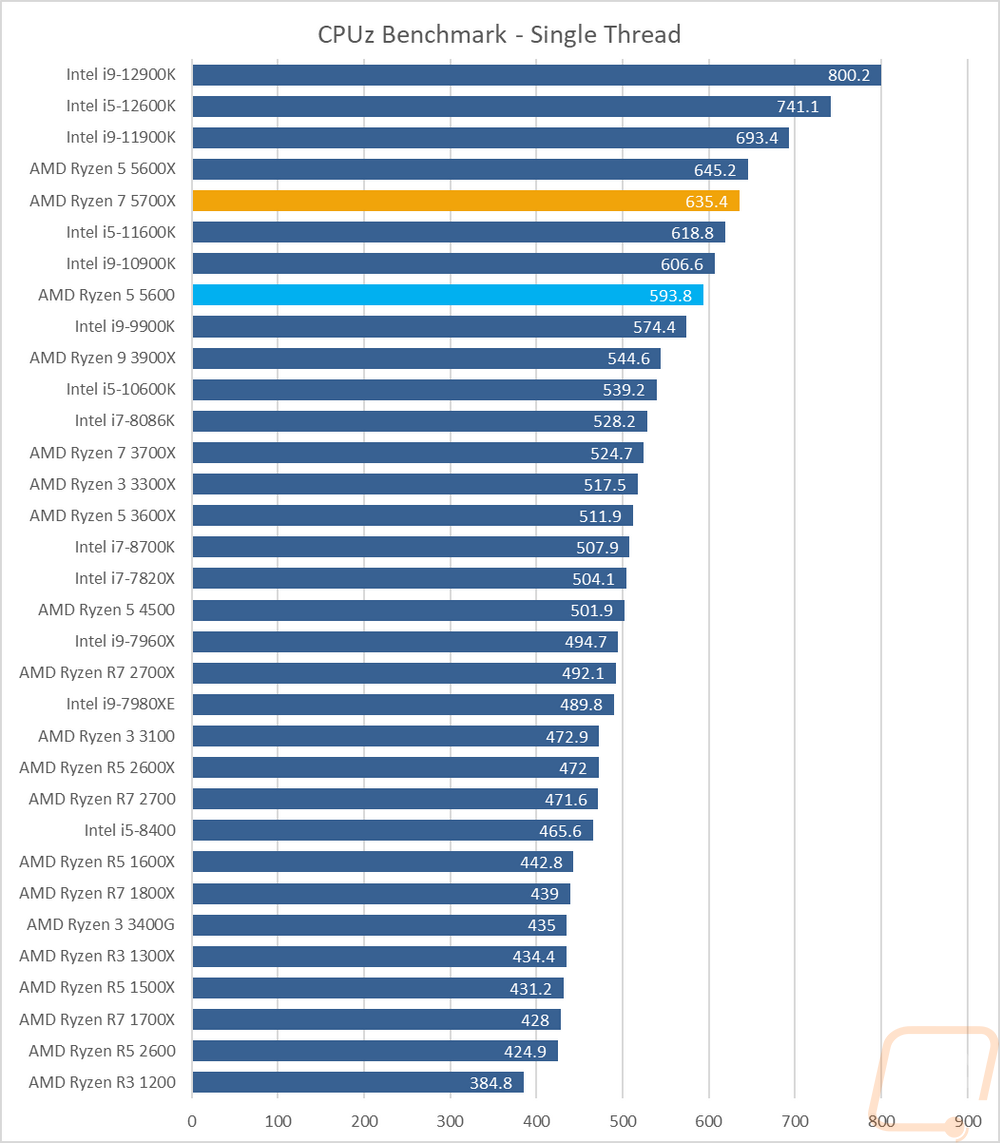 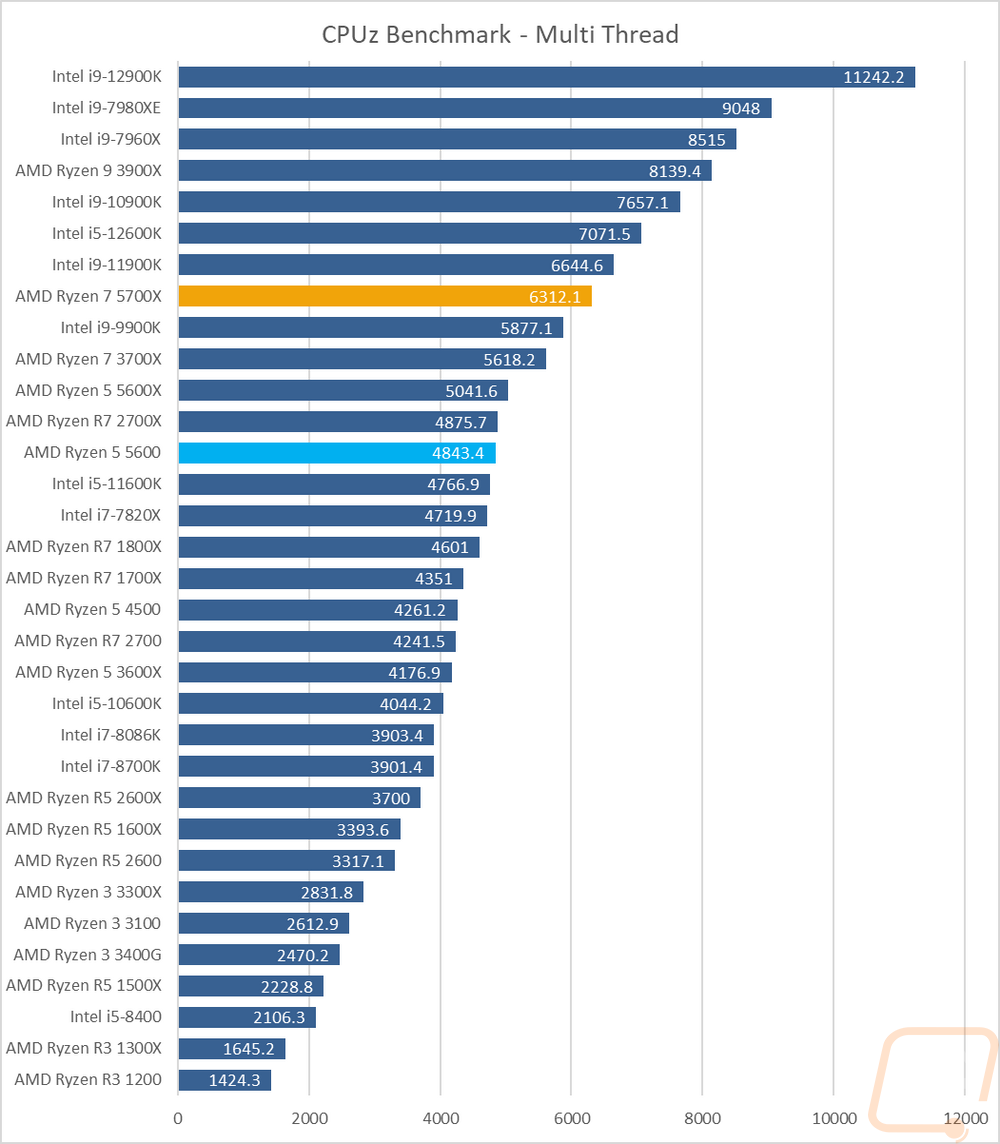 Next, we have wPrime which is a classic overclocking benchmark that calculates pi out to 1024 million digits and is timed. This is a multi-thread heavy test which has the 5700X up in the top ¼ of the chart where the 6 core 5600 is down at the halfway point. The higher clock speed of the 5600X helped it a little over the 5600 but they aren’t too far apart. 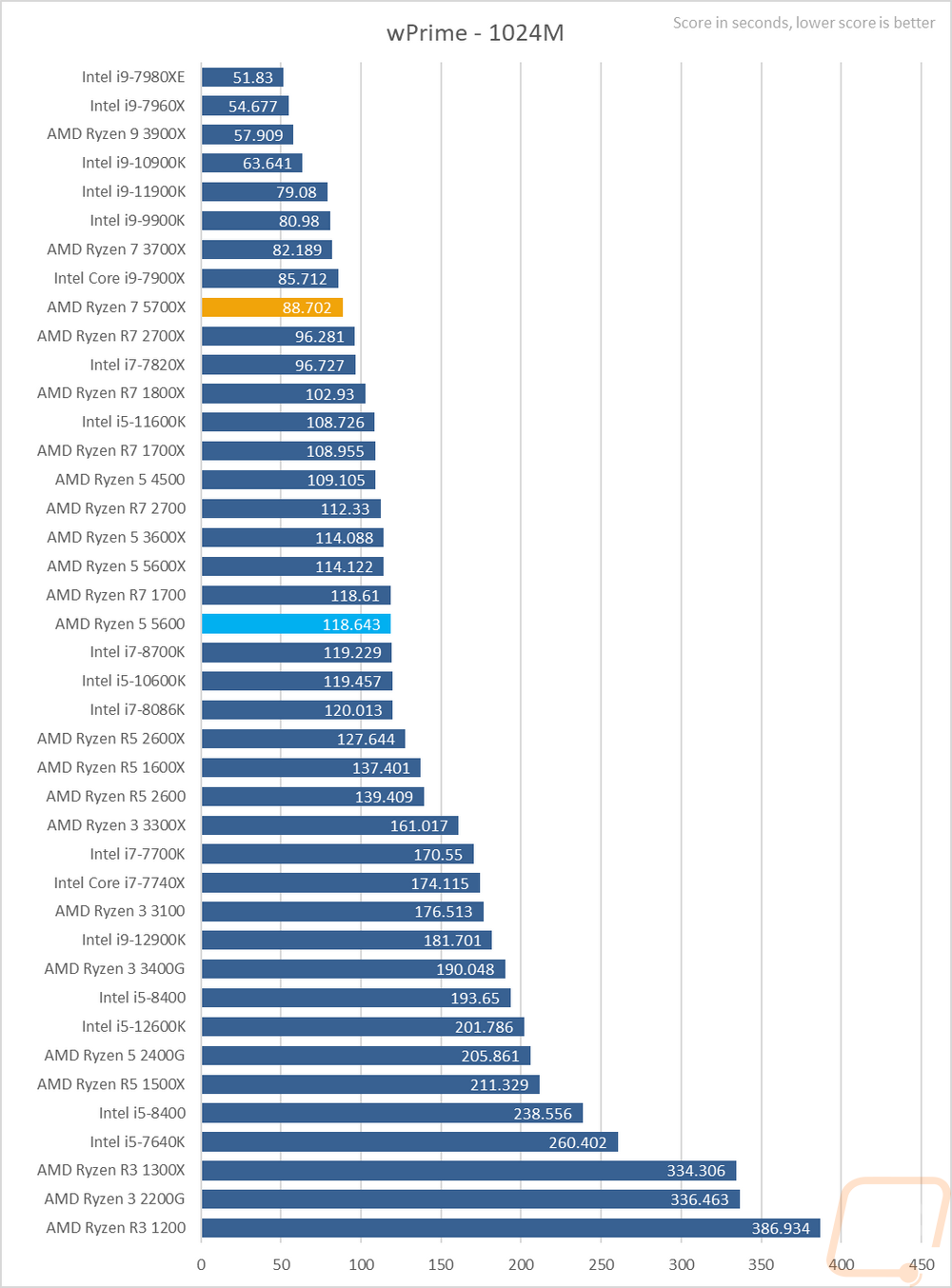 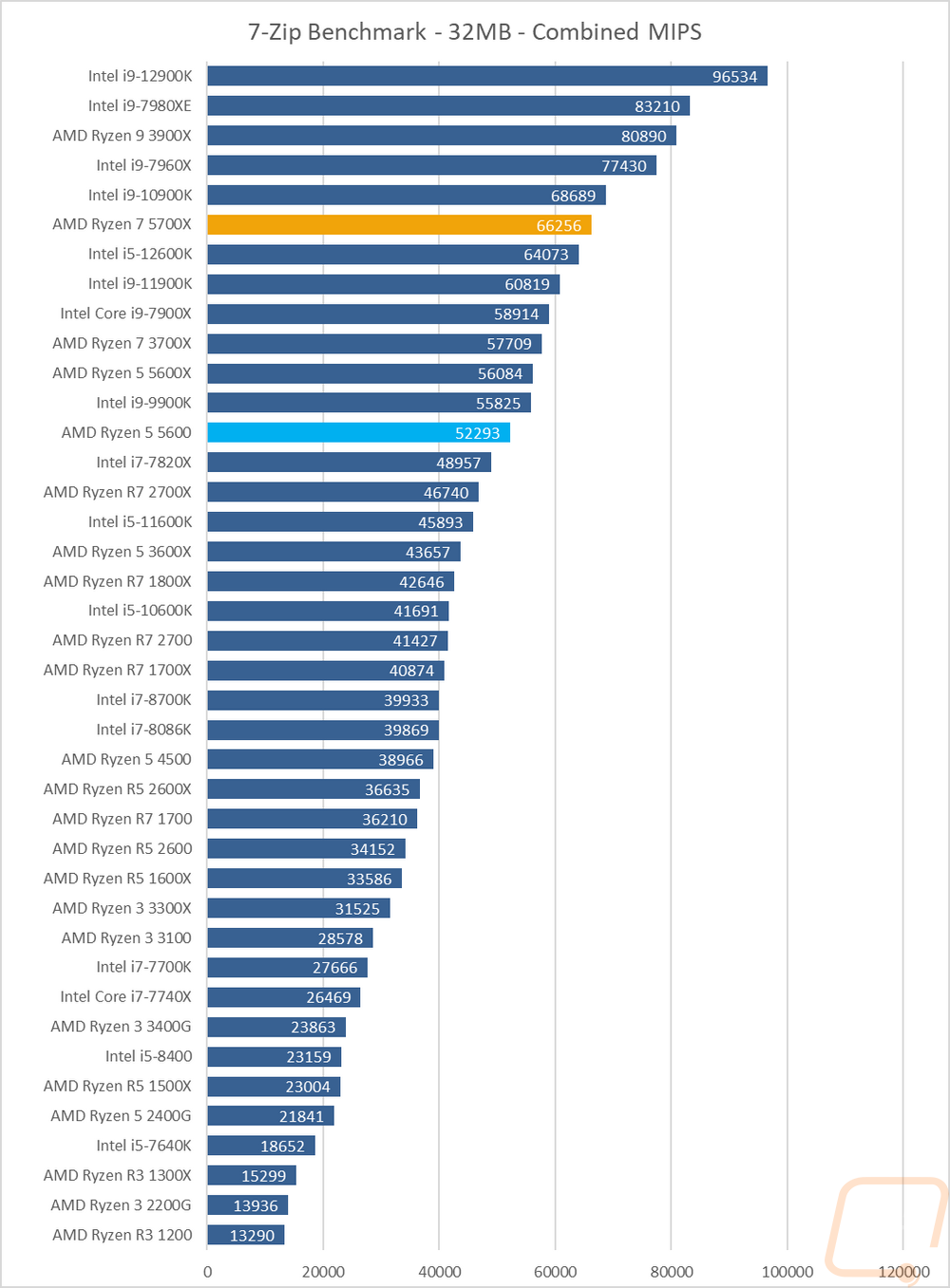 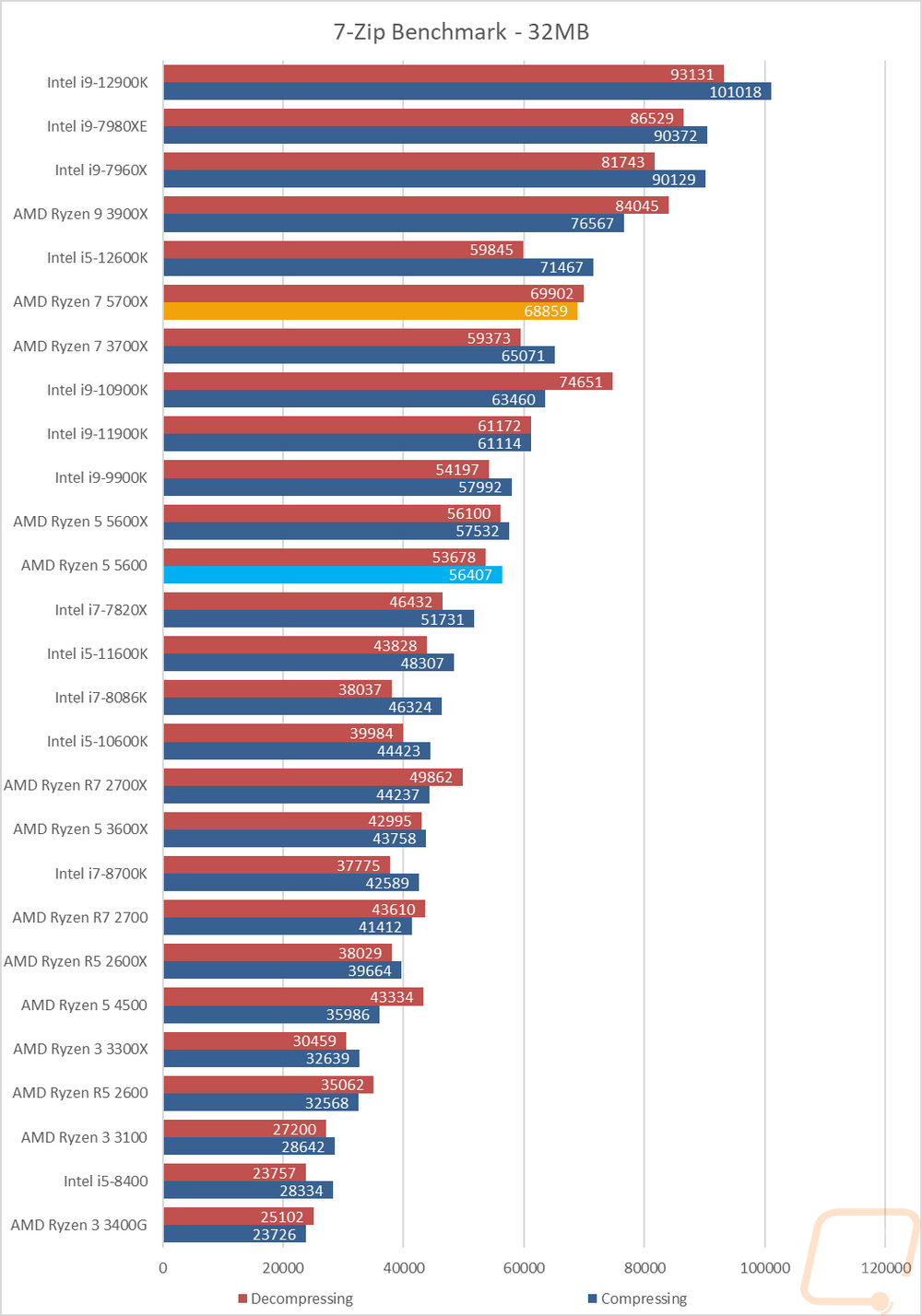 Jetstream 2 is a compilation benchmark that takes a long list of HTML5 and Java in-browser tests and runs them all three times and puts together an overall score. I love this benchmark because lets be honest, most people are using their browser more than any other game or program. Jetstream gives some interesting results sometimes though but it tends to prefer high IPC or single-core performance and there are some situations where it prefers lower core count CPUs. This is why the 5600X does so well here with just the new 12900K out in front of it. The 5700X and the 5600 still did well though with just the 12600K out in front of them. 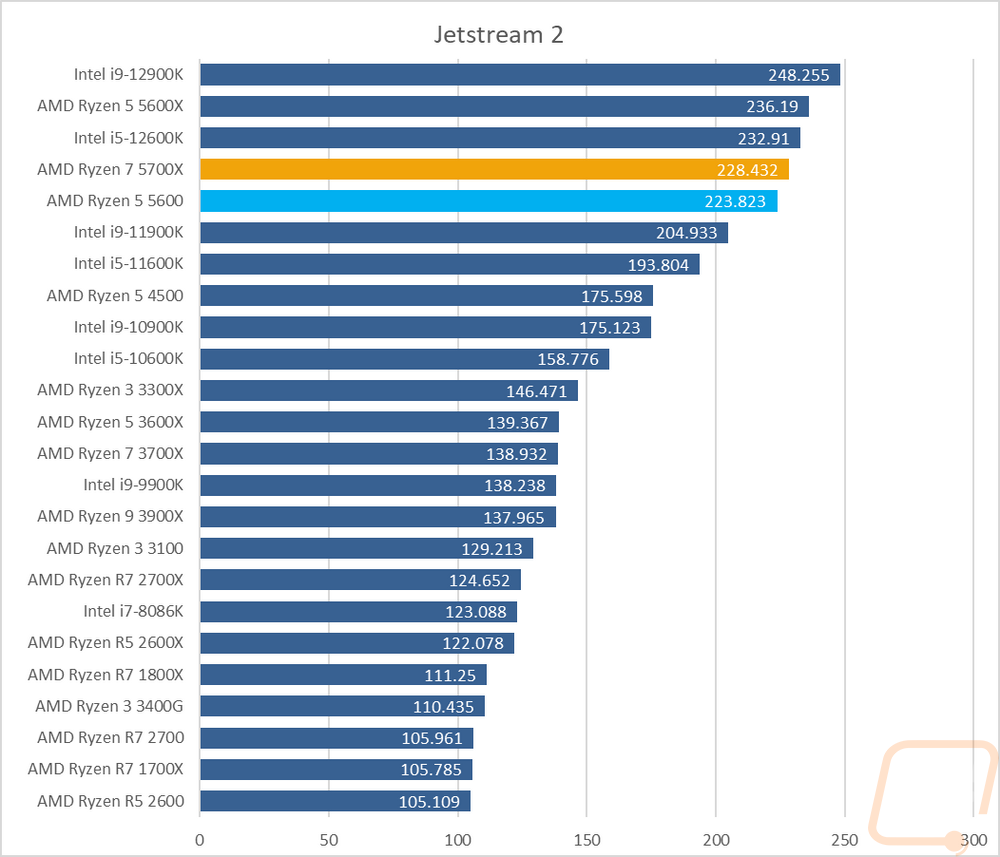 For Passmark Performance Test I took a look at both the older version 9 and the newer version 10. On both, I only look at the overall CPU score which takes a few different synthetic benchmarks and combines the results to put together an overall score. In version 9 we have more of the older CPUs in our results and the 5700X with its 8 cores outperformed the older 12 core 3900X which is impressive. The 5600X has a decent lead on the 5600 here with the 11900K behind it and the 5600 running ahead of the 9900K. In Passmark Performance Test 10 the 3900X jumped out ahead of the 5700X again but the 5700X does outperform the 11900K and the 10900K. The 5600X is ahead of the 5600 but they are still relatively close together. 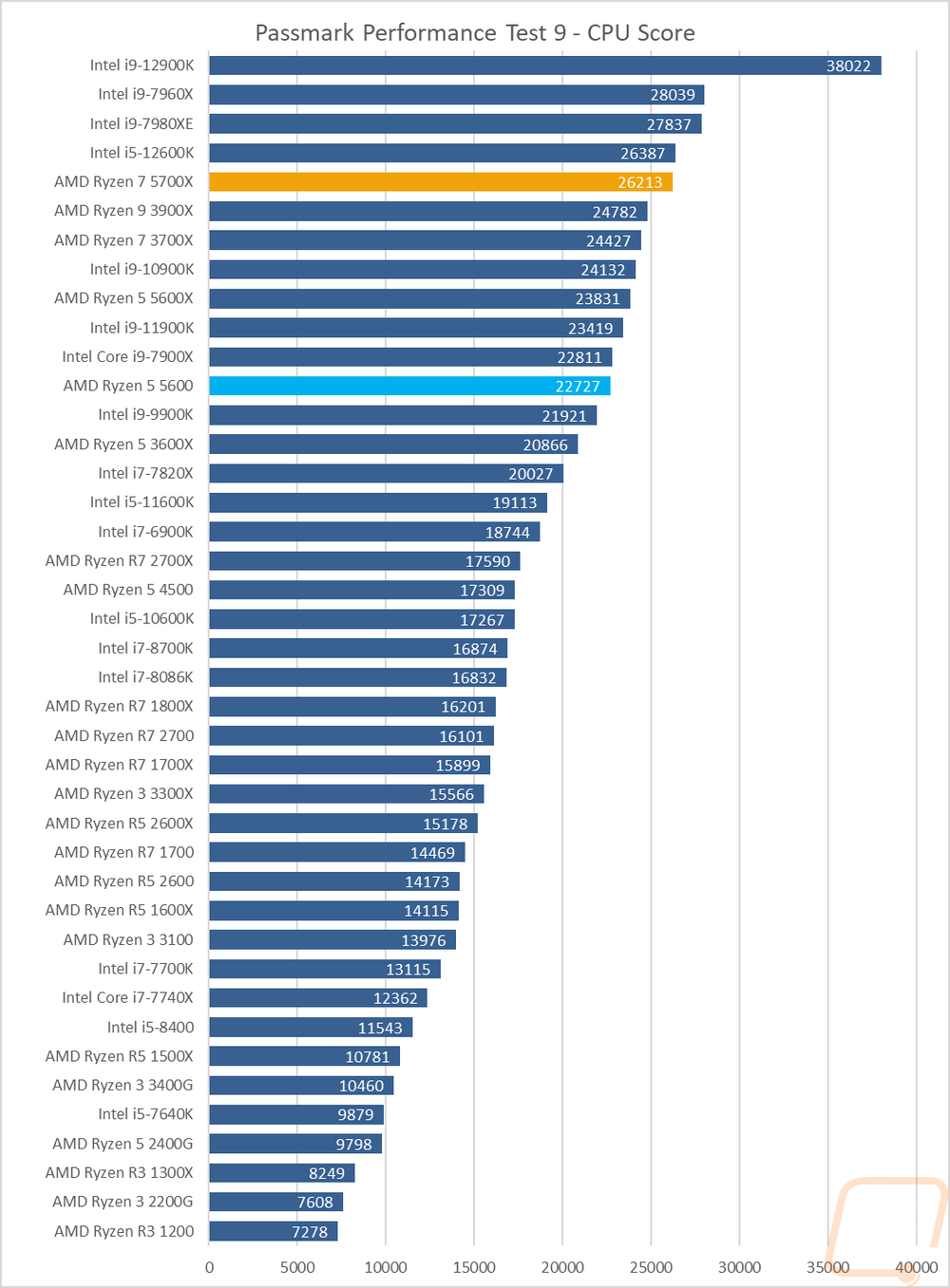 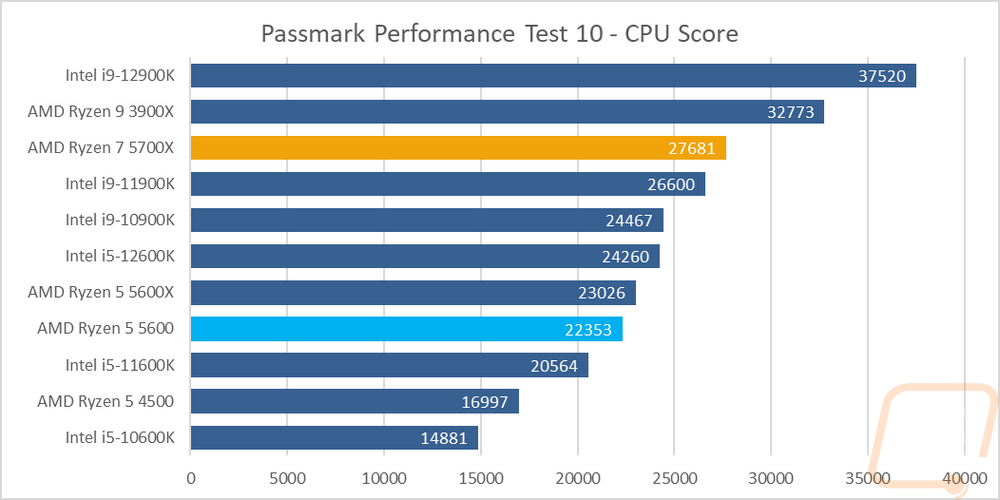 PCMark 10 is a great test because it tests things like video calls, browser performance, excel, and word performance to give an idea of real-world performance. It tends to like higher clock speeds which you can see all of the 5 GHz CPUs up at the top. The 5700X sits behind all of Intels 5GHz CPUs with it, the 5600X and the 5600 being the next three CPUs. 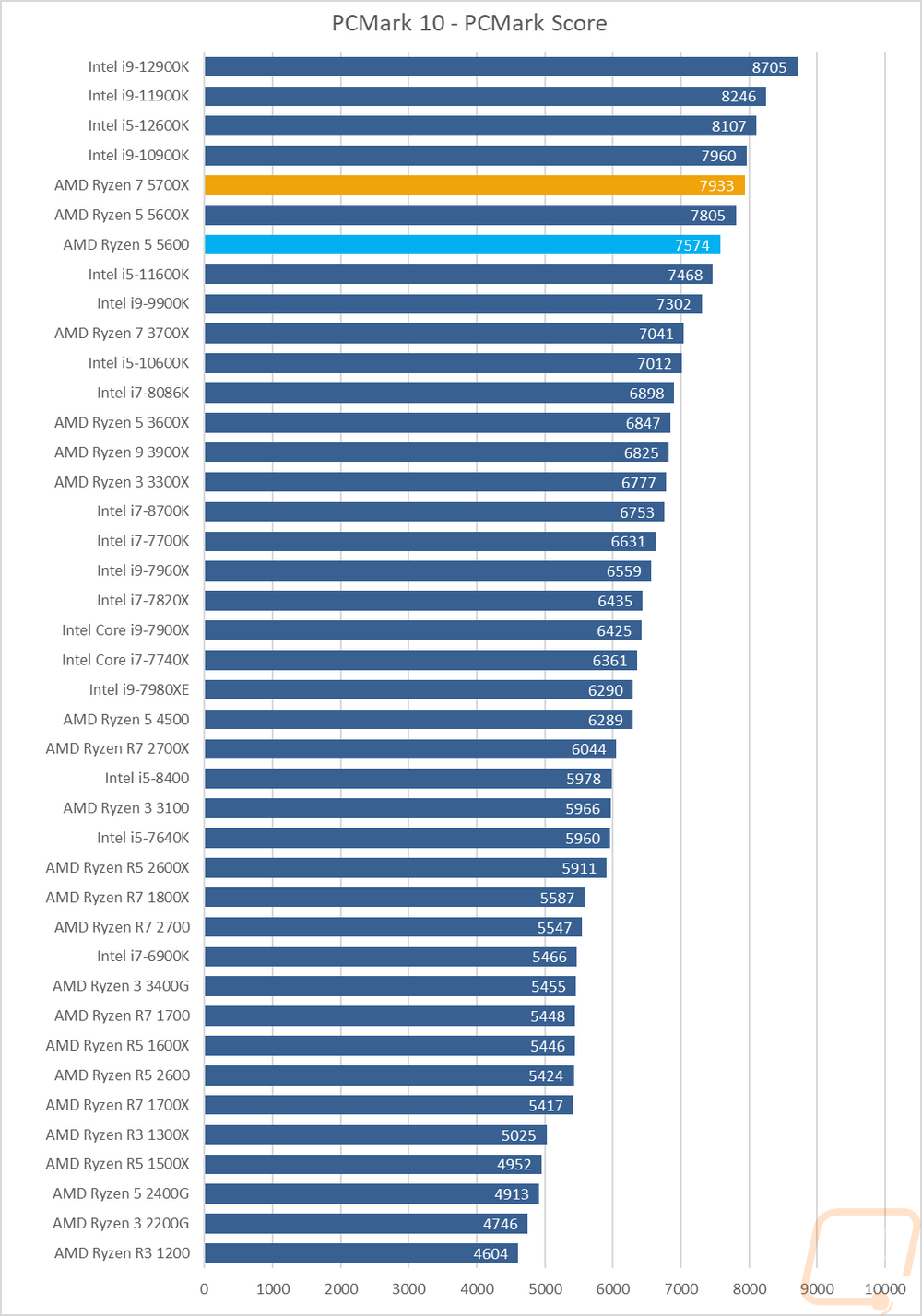 We recently added even more real-world testing with the UL Procyon Benchmarks which are as real-world as they can get using the actual programs that you would use in each test. There are three overall benchmarks, first is the Office Productivity Benchmark which uses Microsoft Office 365 to test actual performance in word, excel, PowerPoint, and outlook. The second benchmark is the Photo Editing Benchmark which is run using the latest version of Photoshop as well as Lightroom Classic to look at photo editing performance. Then the last test is the Video Editing Benchmark which uses the latest version of Adobe Premiere Pro to test video editing performance. I have all three scores stacked together to get an overall look at the performance. Both of Intel’s new 12th Gen CPUs are at the top here but in an interesting turn the higher clock speed of the Ryzen 5600X put it out ahead of the 5700X and the 5600 with it just barely edging out the 5700X even with two fewer cores which goes to show you that sometimes even in situations that you would think that more cores might help that clock speed can sometimes still be king. With the 12 core 3900X gapped by the 5600, this just shows that even more.

Moving the focus over towards gaming my next test is using Dolphin 5.0 Benchmark. Dolphin 5.0 is a Wii emulator and like most emulators, it doesn’t care about high core counts at all. In fact, it only runs two in total. Clock speeds are king here, in addition to Dolphin favoring Intel in general. AMD has improved a lot here with the Zen 3 CPUs which can be seen with the 5600X running high up with the 5GHz Intel CPUs. The 5700X took 10 seconds longer to complete the same benchmark and the 5600 was 18 seconds behind the 5600X. 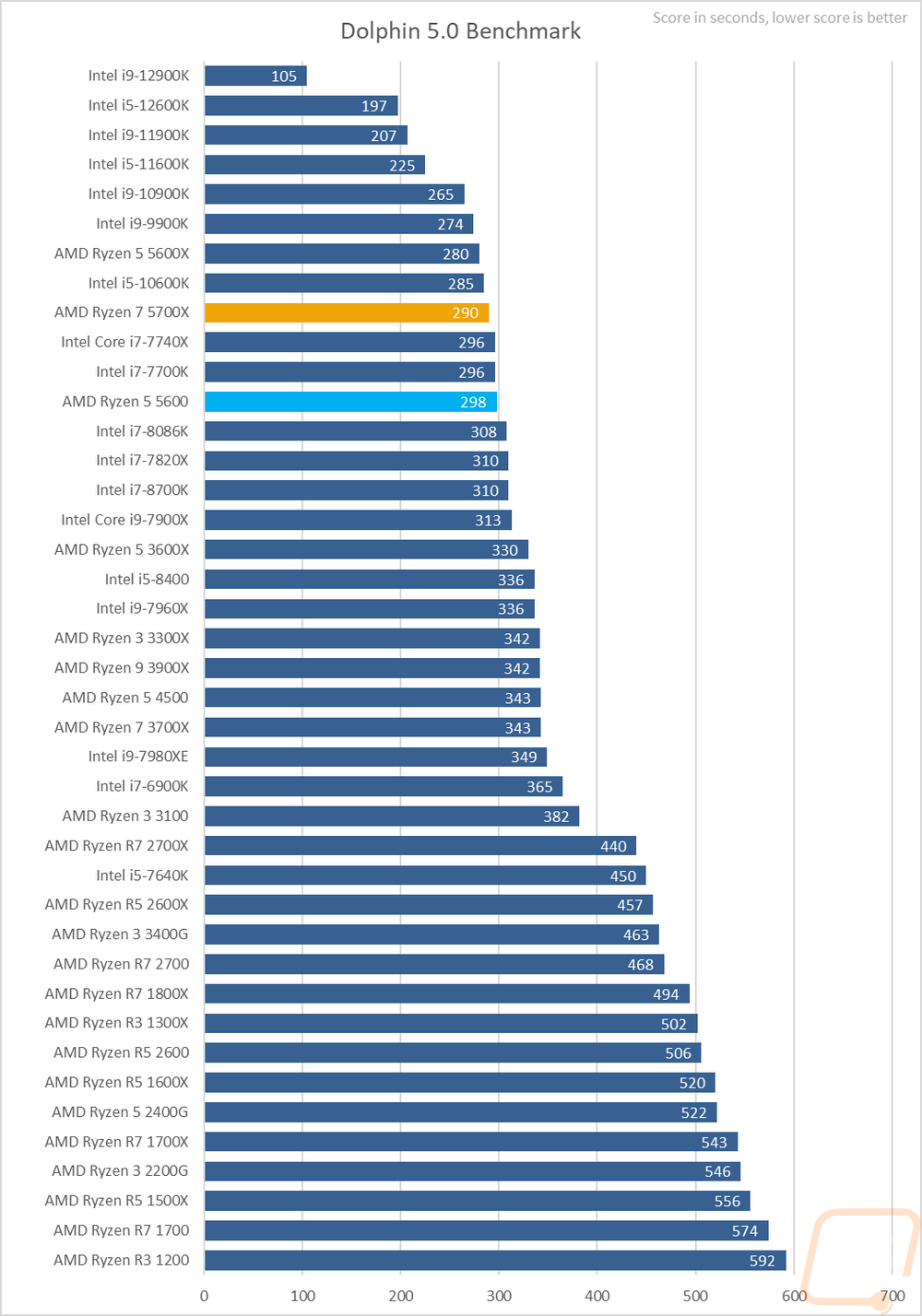 Before diving into game testing I wanted to check out synthetic performance using 3DMark. I tested with the older DX11 Fire Strike test as well as the newer DX12 Time Spy. I also added the new 3DMark CPU Profile benchmark into the mix as well that does a good job of showing the full range of thread counts that you might see being used in games as well as a max threads option that does everything above 16 threads. In the Fire Strike test, the 5700X came in behind the 10900K and the two 12th Gen Intel CPUs, edging out the 11900K slightly. The 5600 was behind the 5600X by 598 points sitting in the middle of some of the older Core-X CPUs. For the Time Spy test, the 5700X came in behind the older 12 core 3900X but was way ahead of the 11600K. The 560 on the other hand sits between the 5600X and the Zen 2 4500. In the last test, the CPU profile test you can see a clear line in the 8, 16, and max thread tests where the 5600 and 5600X fall off. Both of those CPUs were close together in all of the tests and the 5700X was in line with them for the 1, 2, and 4 thread tests but its extra cores helped it pull ahead after that. 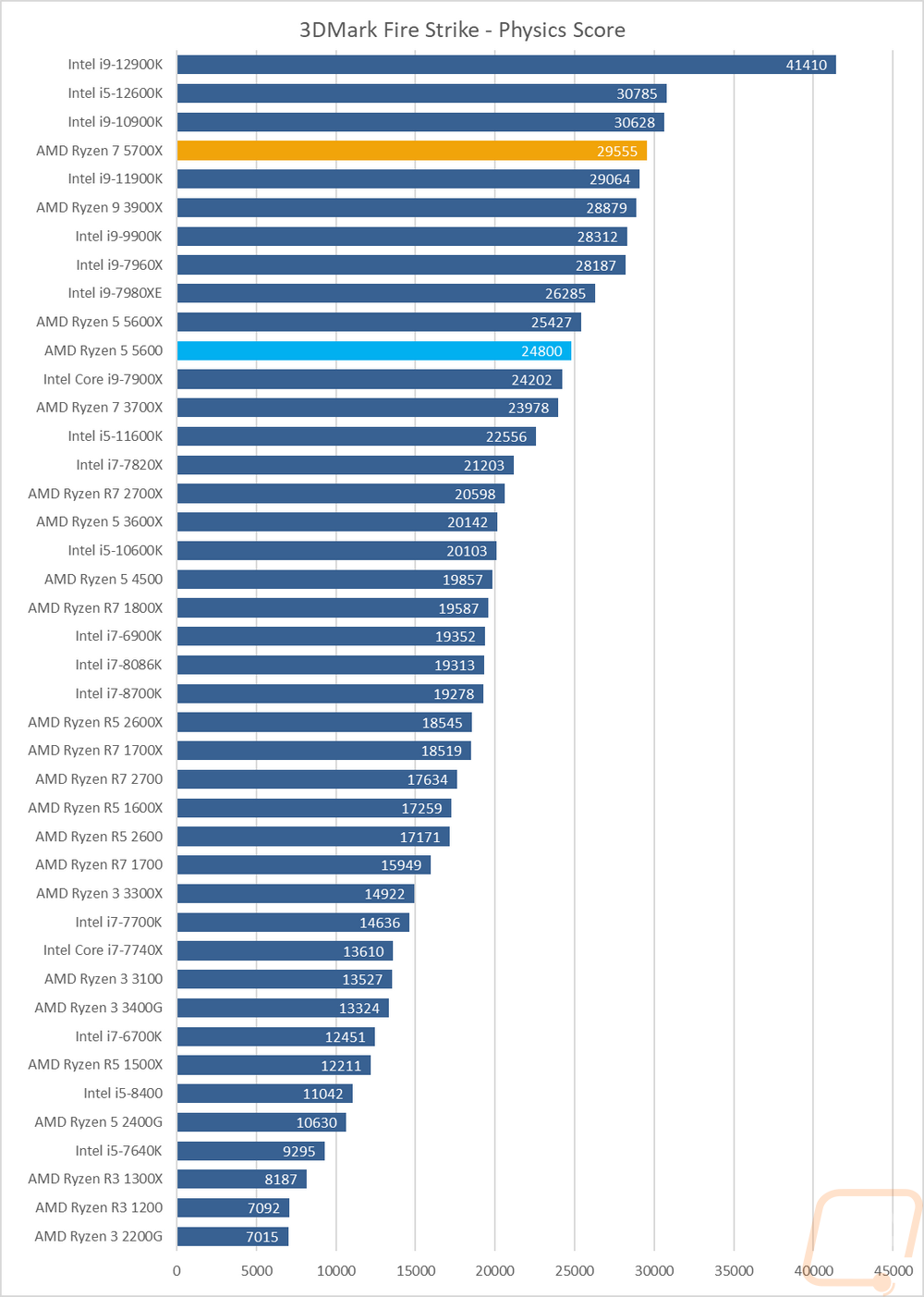 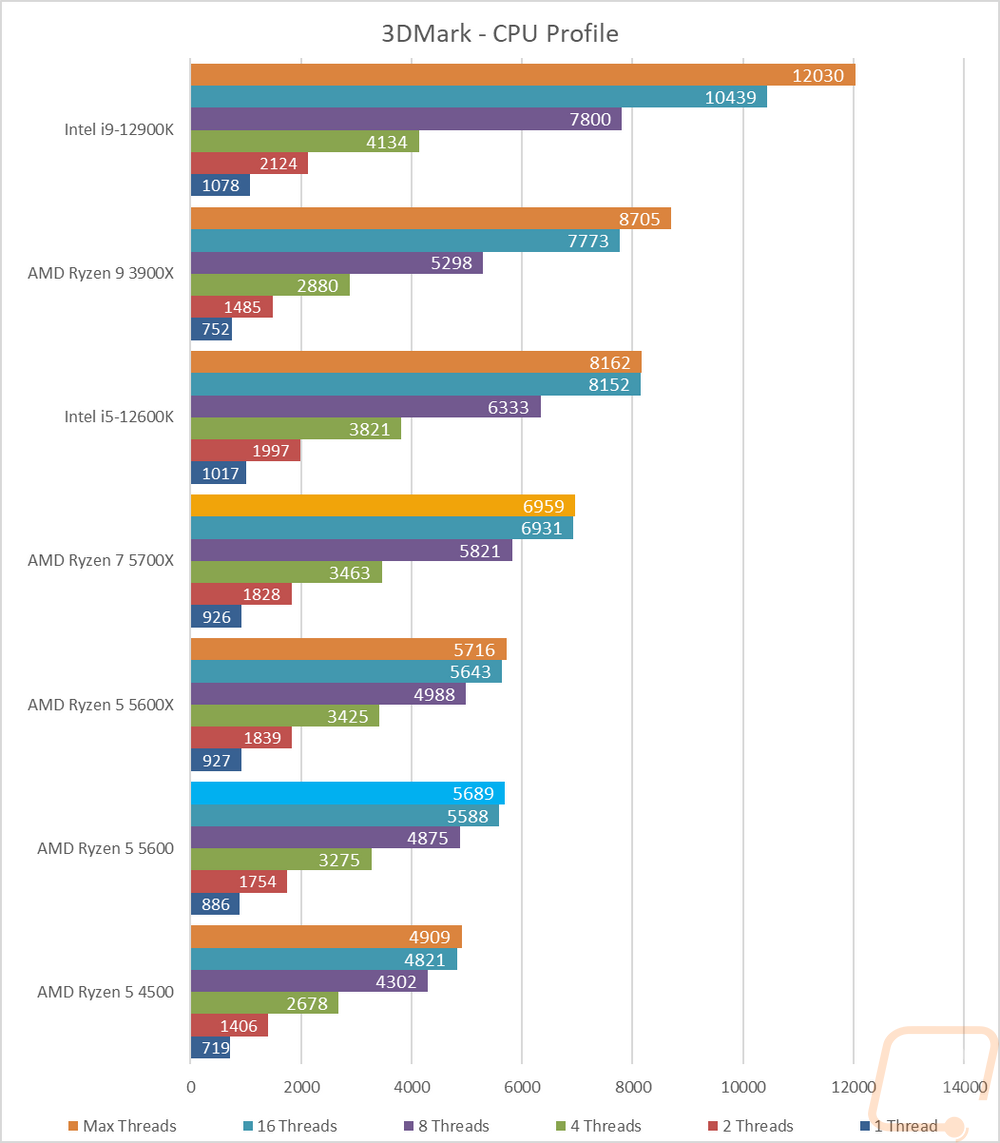 For in-game performance testing, I ran them through a variety of new and old games. TF2 for example is a very old game at this point but is also extremely CPU dependent which makes it a good option to check out for older source-based games. Game results for both the 5700X and the 5600 show a noticeable difference when compared with the older Zen 1 and Zen 2 CPUs, which is the same as what I saw in my original 5600X review. Where things get interesting however is how the relation between core count and clock speeds mix. The 5700X stays ahead in some tests due to its extra cores but in games like Dirt 5, Metro Exodus, and Borderlands 3 the 5600X come in ahead of the 5700X. 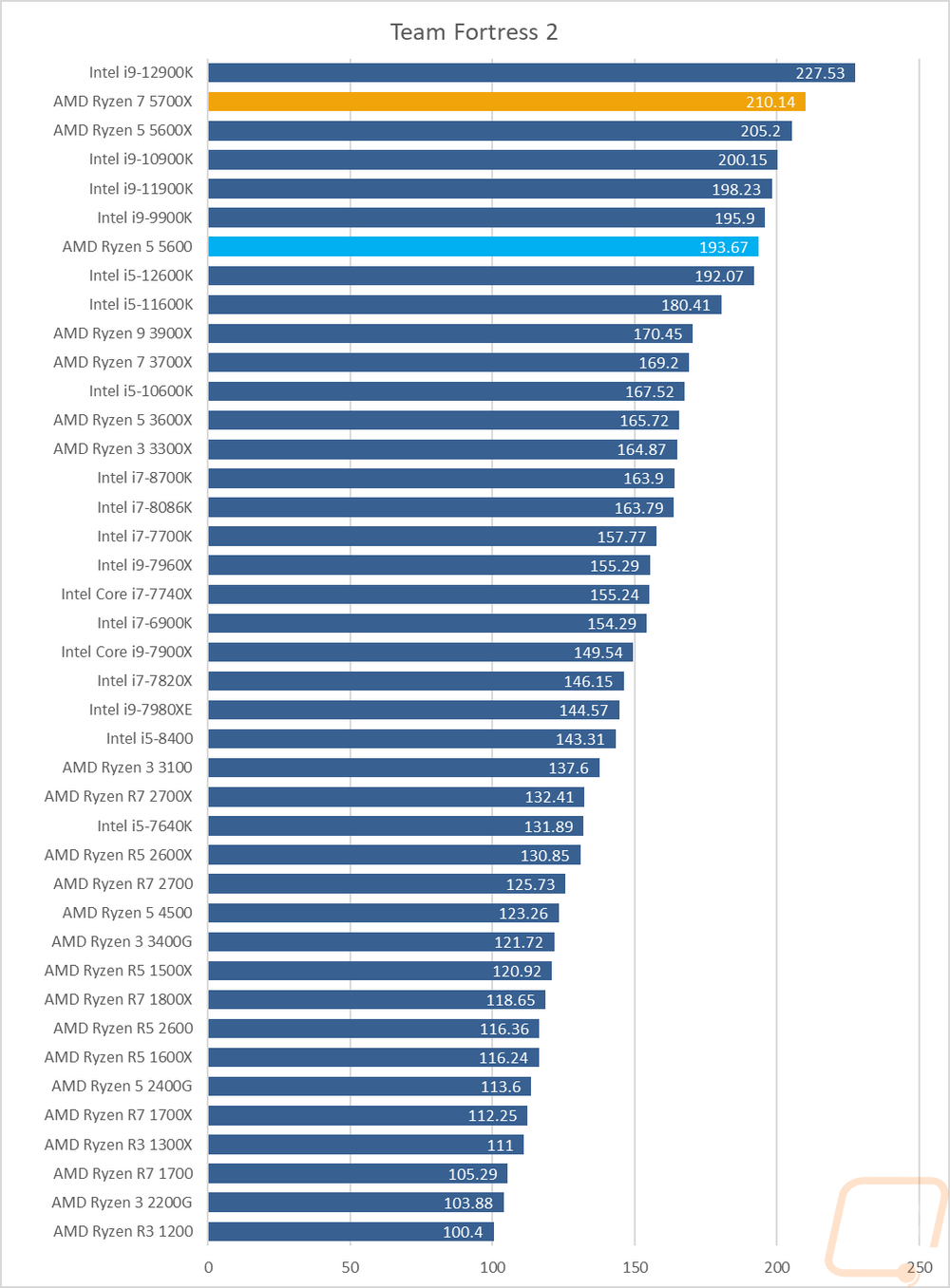 I did also run both CPUs through a few tests using AIDA64, specifically, I wanted to check out cache performance, memory performance, and how the CPUs handle single and double precision and different integers. The 5700X did well in the L1 cache tests with its additional cache over the 5600 and the 5600X. For the memory performance, the two Zen 3 CPUs did well but do show a noticeable difference between their read and write performance with the reads being significantly faster.