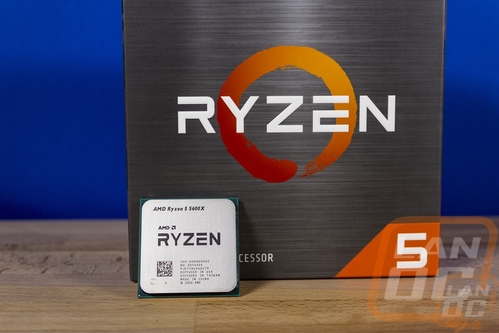 For testing, I updated our X570 Crosshair Hero WiFi so it would support the Ryzen 5 5600X and then put it through our standard benchmark suite. This starts with the two X264 HD benchmarks, the older 4.0 and the “newer” 5.0 tests. These take a look at encoding performance, averaging out the FPS when encoding different videos for the scores. The “mid-range” 5600X jumped ahead of a lot of the higher-end CPUs here to come in behind the 3900X in the 5.0 benchmark and in 4.0 it did even better topping the chart. That is huge given that it outperformed the 10900K and other higher-end CPUs but it is an early look at the IPC performance of Zen 3 as well because 4.0 likes clock speed and IPC. 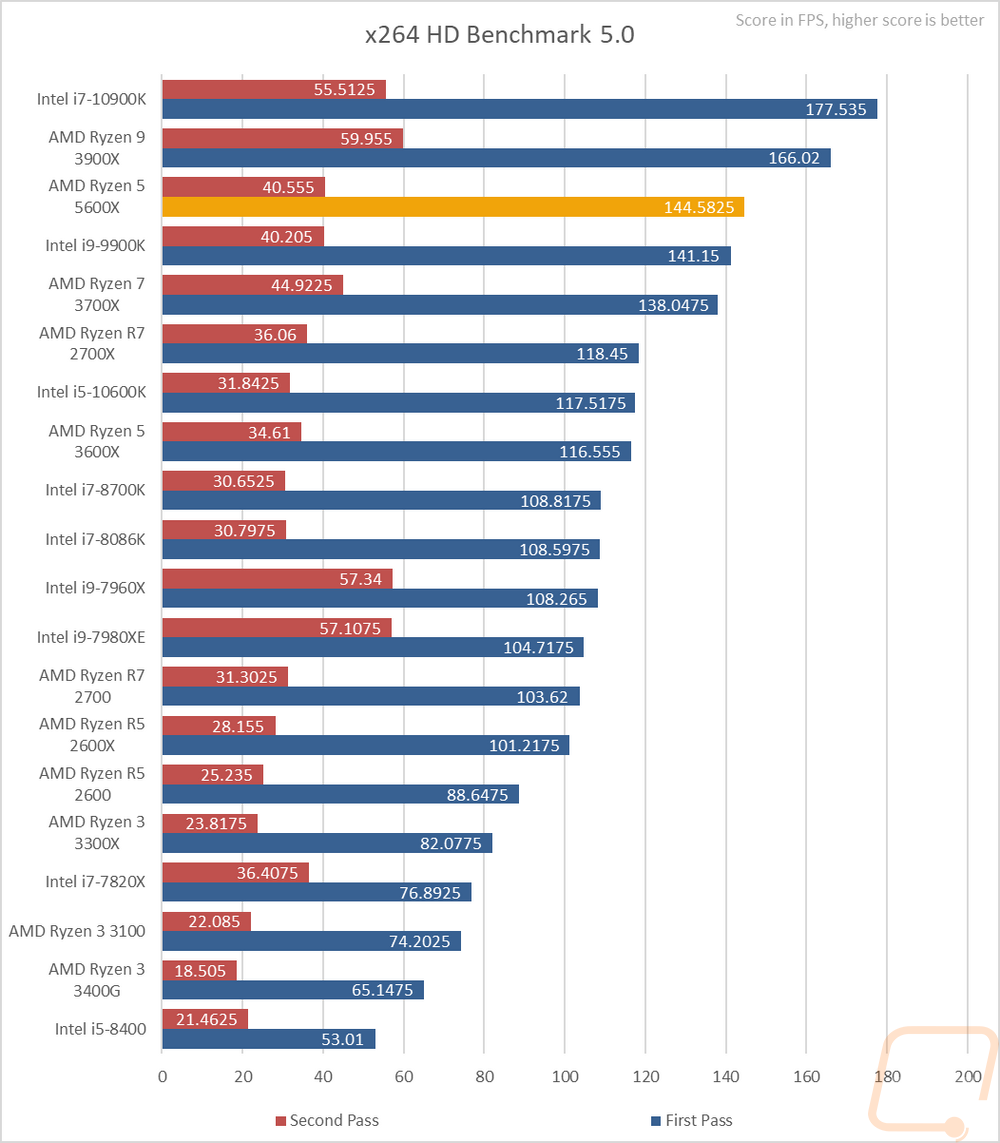 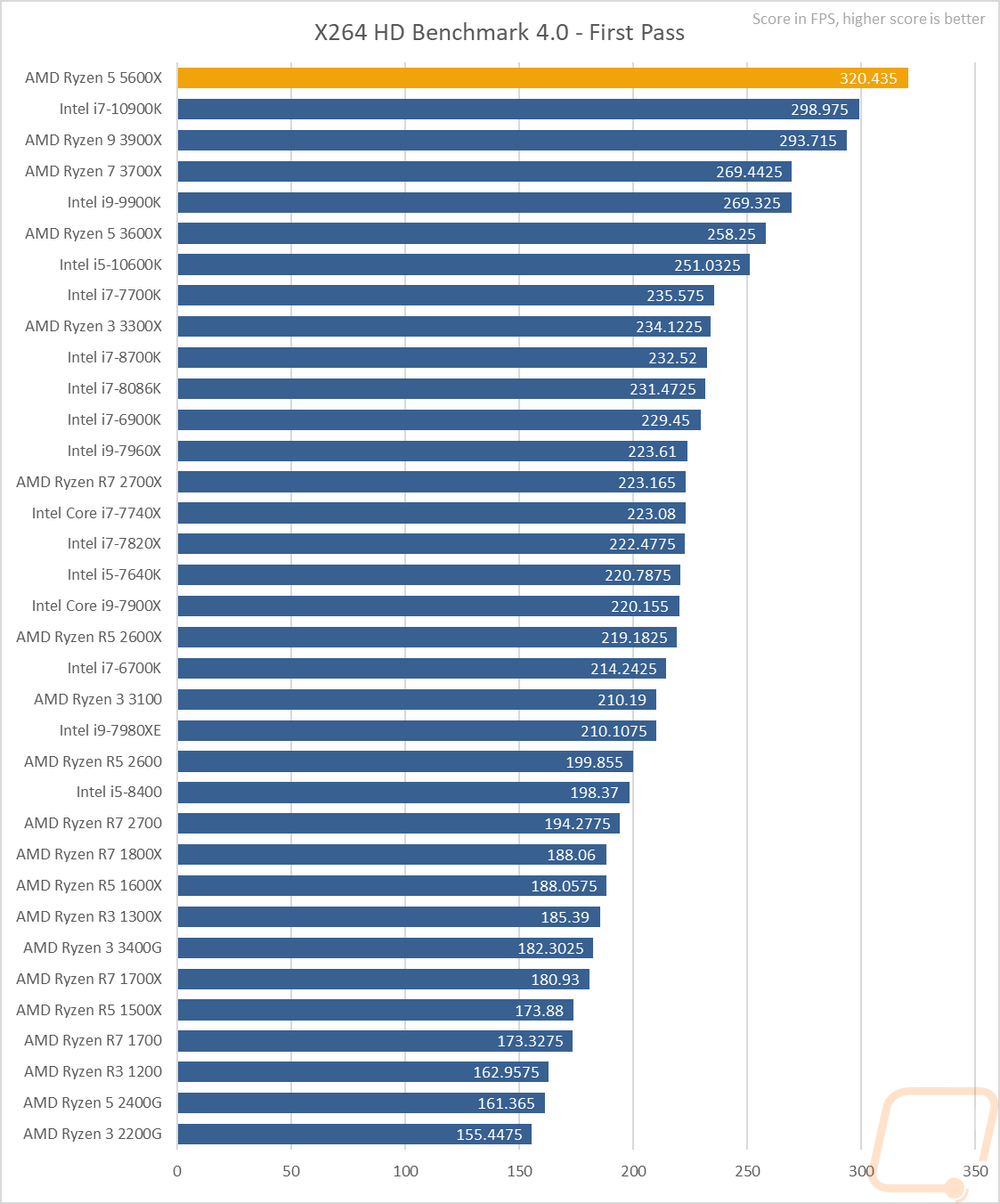 My next test was in Blender which is an open-source 3D modeling software. I used their default benchmark tool with the BMW and Classroom tests for a timed render test so lower numbers here are better. The 5600X shows an improvement from the 3600X here but is still in the range that you would expect a mid-range CPU to be in. This was however faster than the 10600K which isn’t far off in pricing from the 5600X. 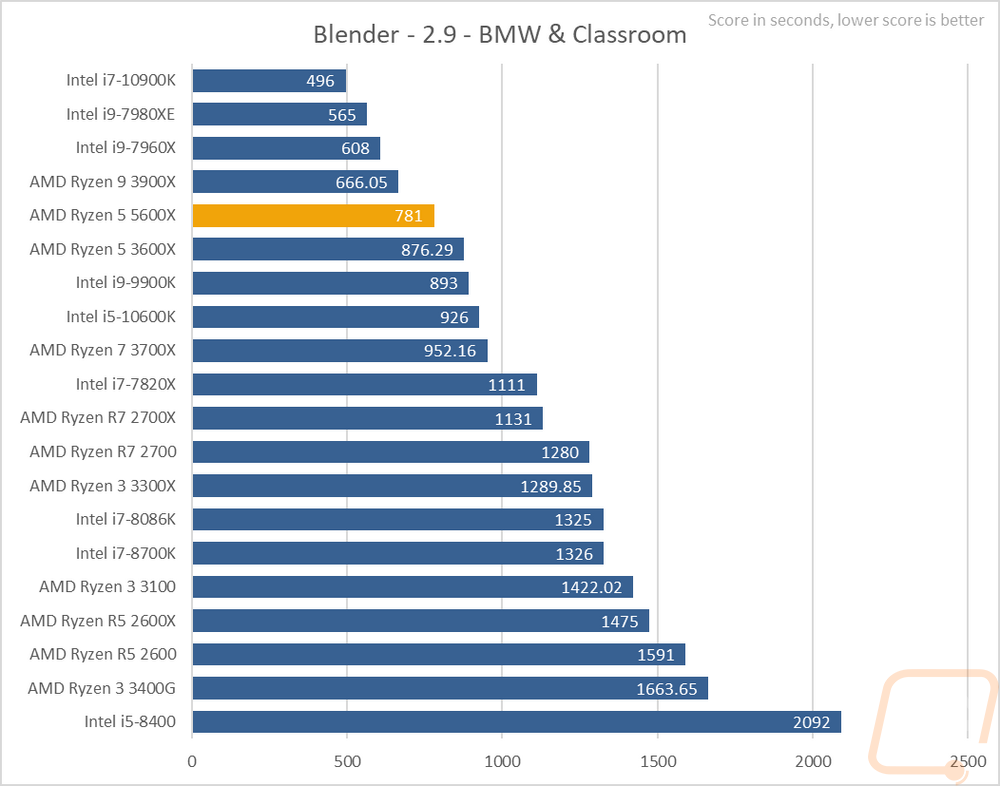 Continuing with the video encoding theme I also have handbrake which is a which is an open-source transcoder. For this test I am taking a 4k video down to 1080p 30 FPS, the results are the average FPS of that task. This test has the 5600X close to the 3700X which has two extra cores and catching up to Intel’s last few higher-end CPUs. 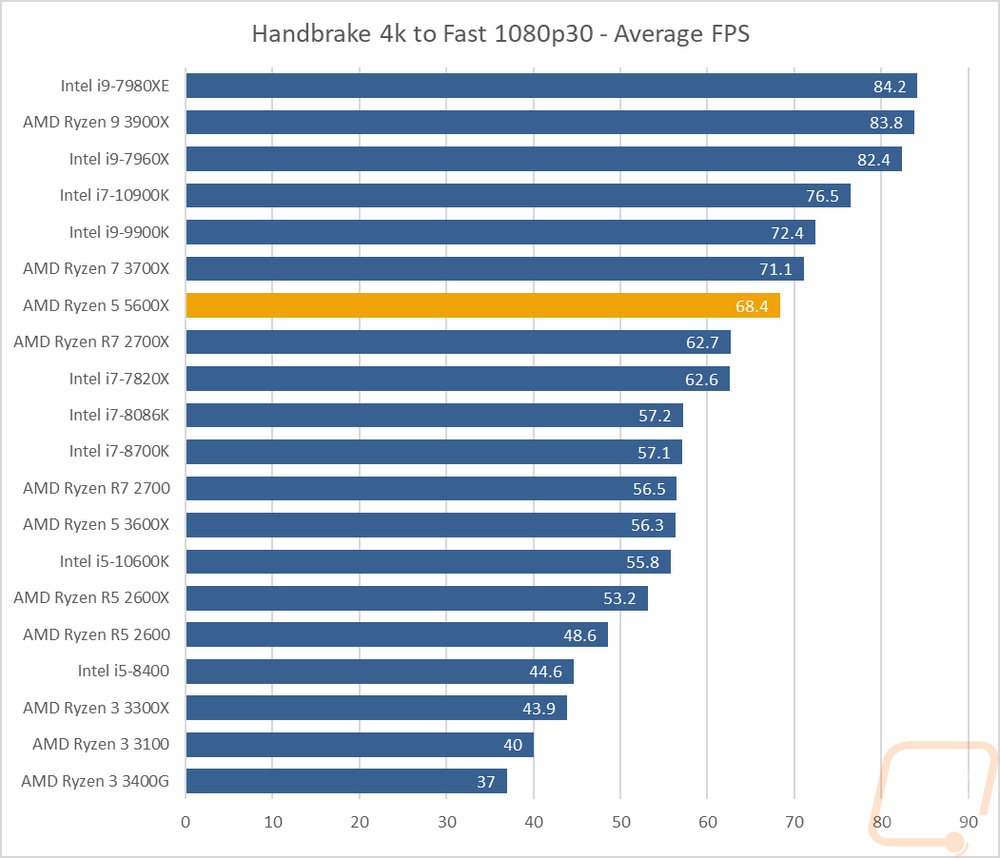 For the always popular Cinebench, I ran the older R15 test which better fits a 4 core CPU, and the new R20 for high core count CPUs. I love Cinebench because it is one of a few benchmarks that let us get a look at the single-threaded performance which in the case of the 5600X, is exactly what I’m most interested in. So in R15 multicore, the 5600X did well, coming in not that far behind the 9900K which was Intel’s flagship gaming mainstream CPU that launched with an MSRP of $488 and sold for even more. The 10600K is also 452 points behind the 5600X as well here. For the R20 multicore, the 9900K did better with the 5600X coming in between the now dated 2700X and the 3700X but still ahead of the 10600K by a good margin. As for single-core performance though the 5600X which is the only Zen 3 CPU I have tested here was way out in front of everything in both benchmarks. 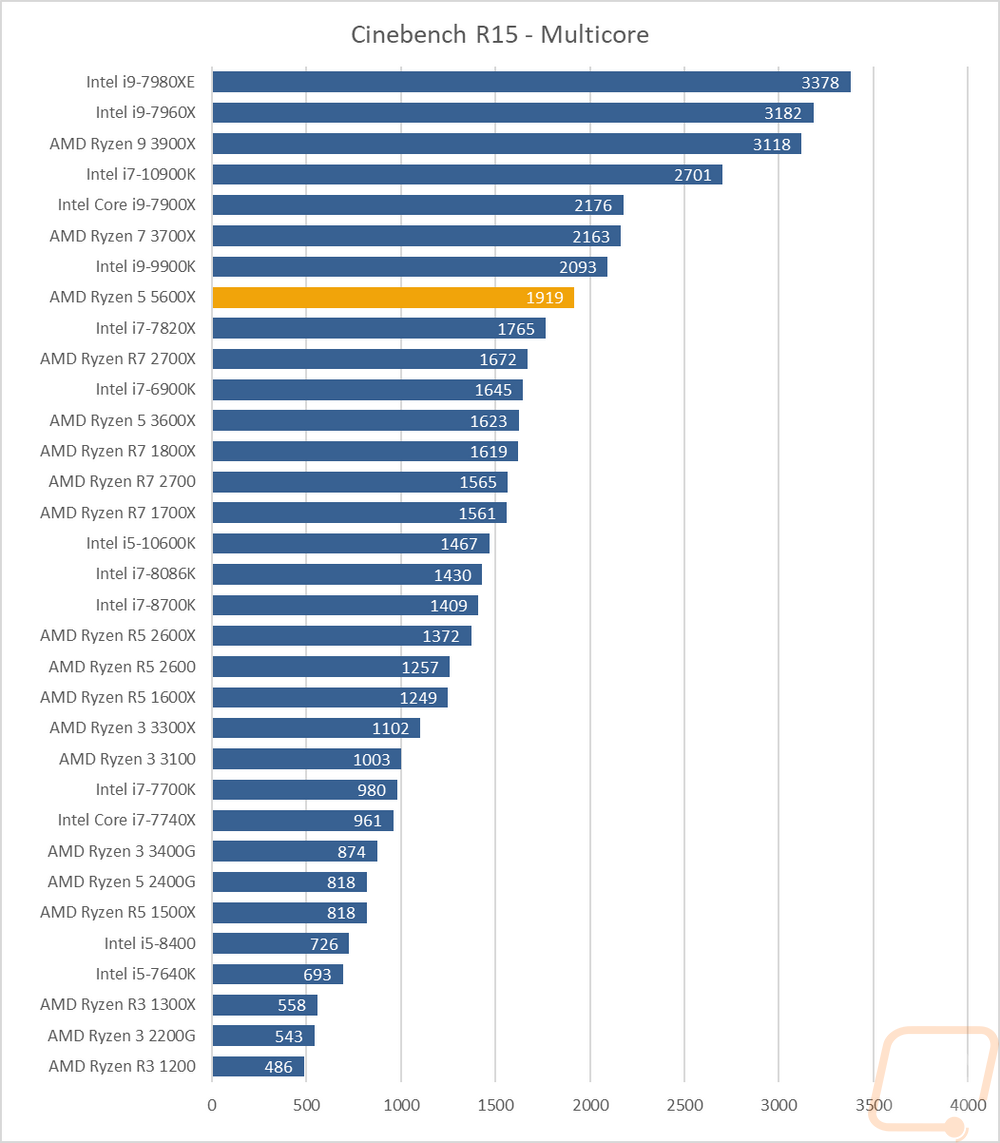 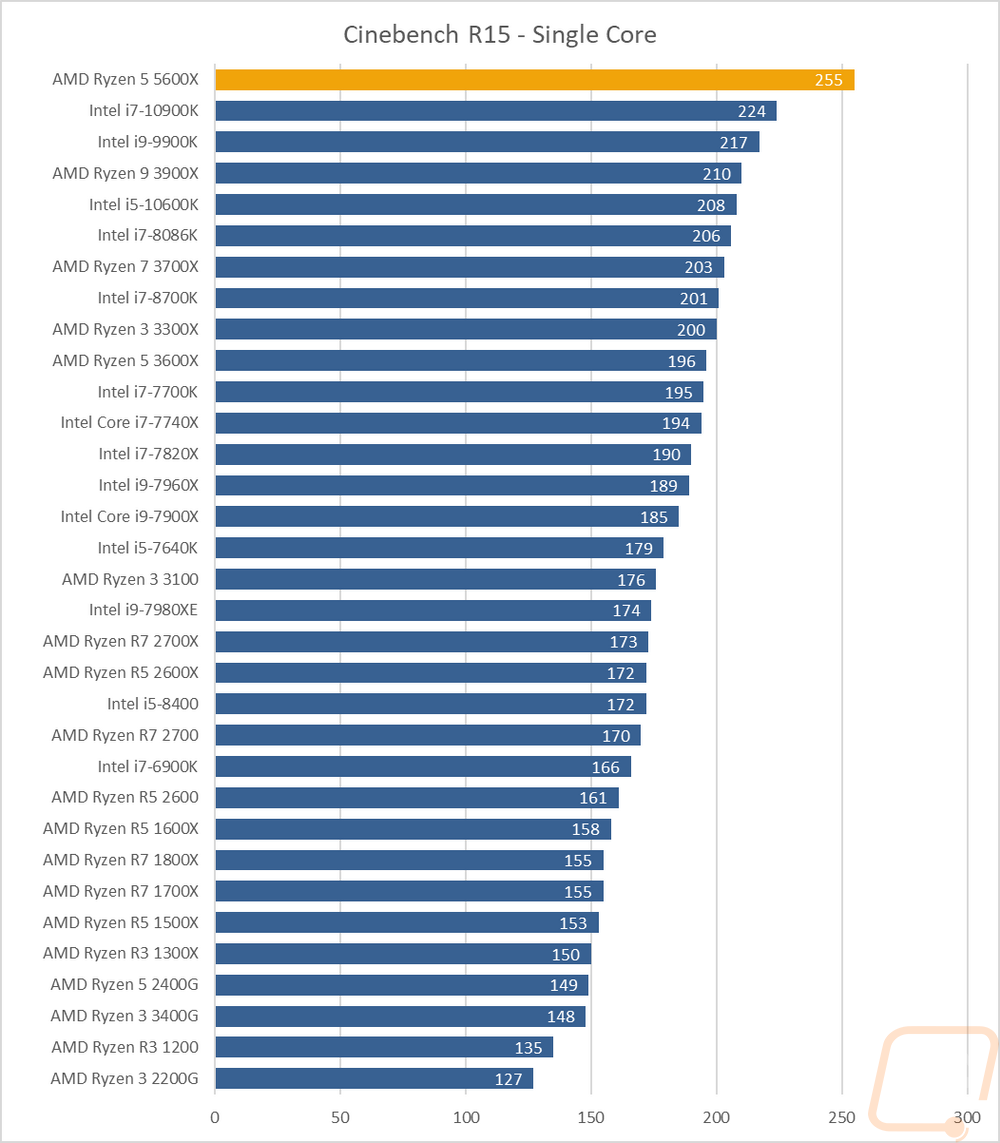 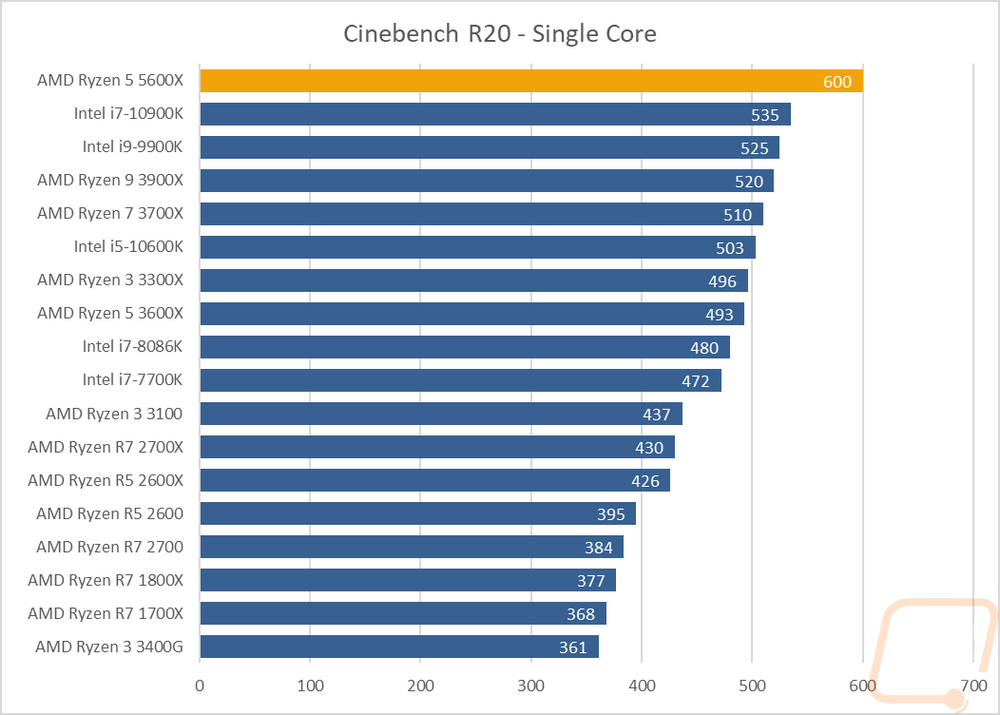 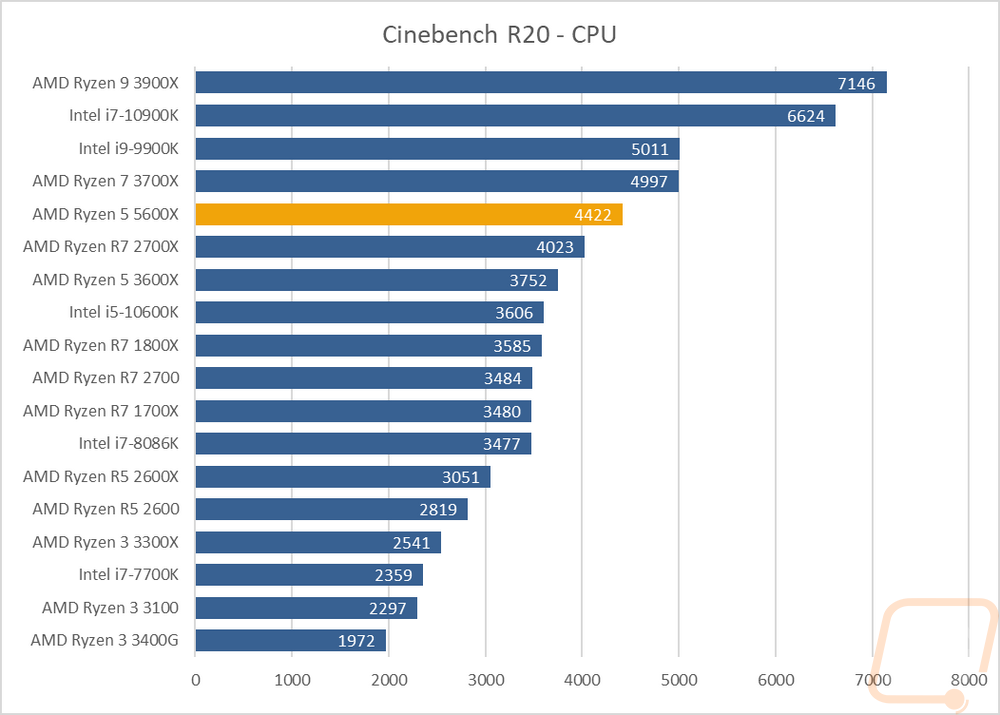 Next up were ray tracing focused rendering benchmarks. Here I tested the 5600X in POV-Ray and V-Ray. POV-Ray was also tested with a single core and across all of the cores. The single-core result, like in Cinebench, is the highest on the chart. With all 6 cores, the 5600X came in behind the 3700X. In V-Ray, we saw the same result as well, but it is also important to point out the 10600K is far behind on both tests which is a more direct comparison to the 5600X. 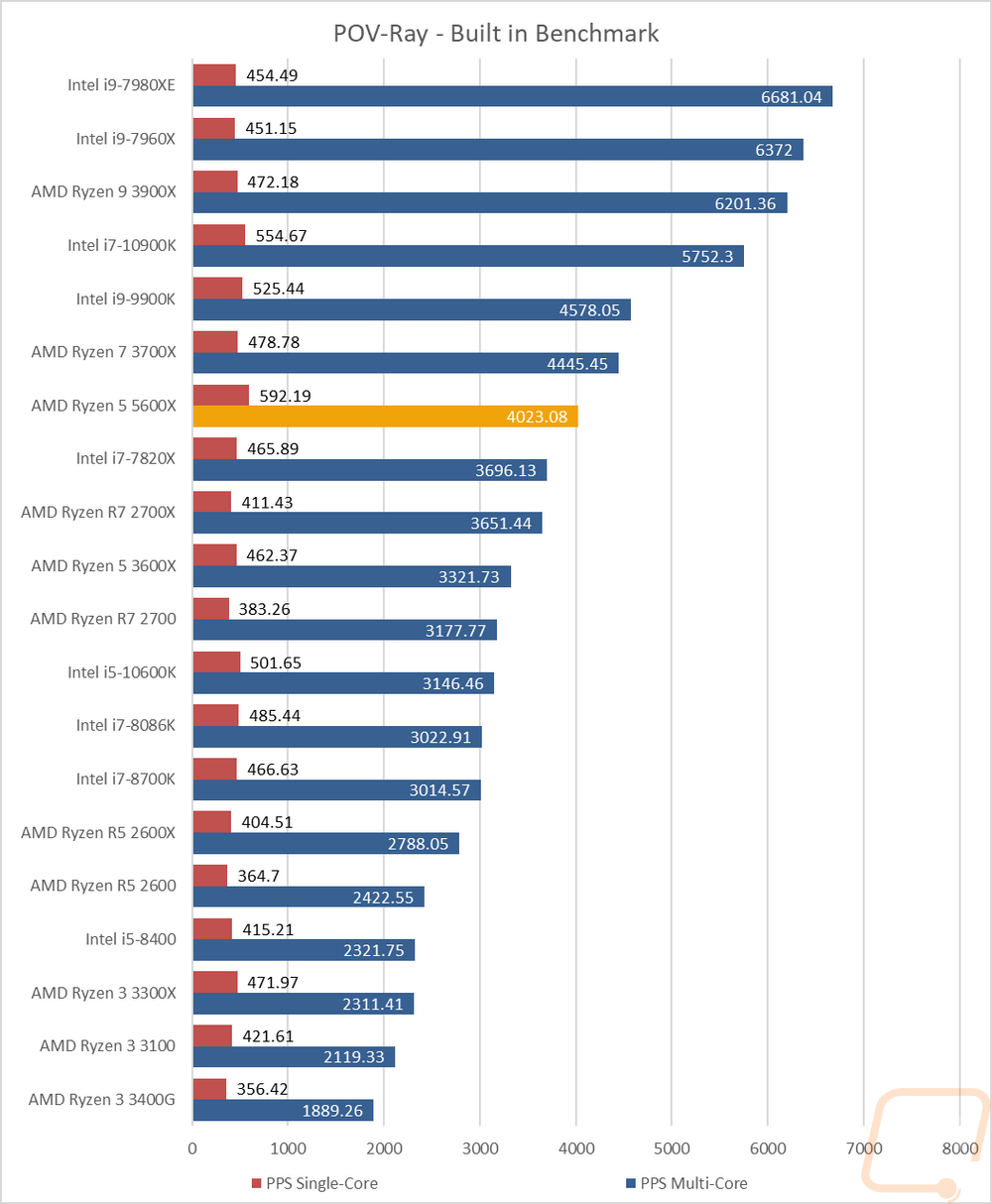 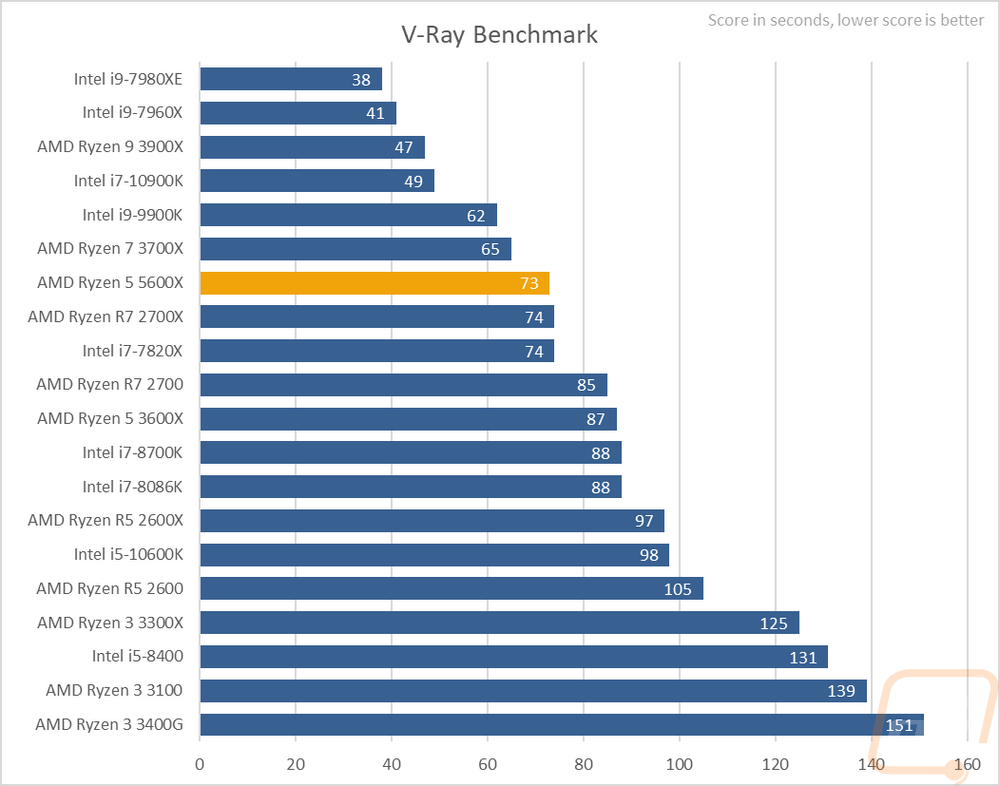 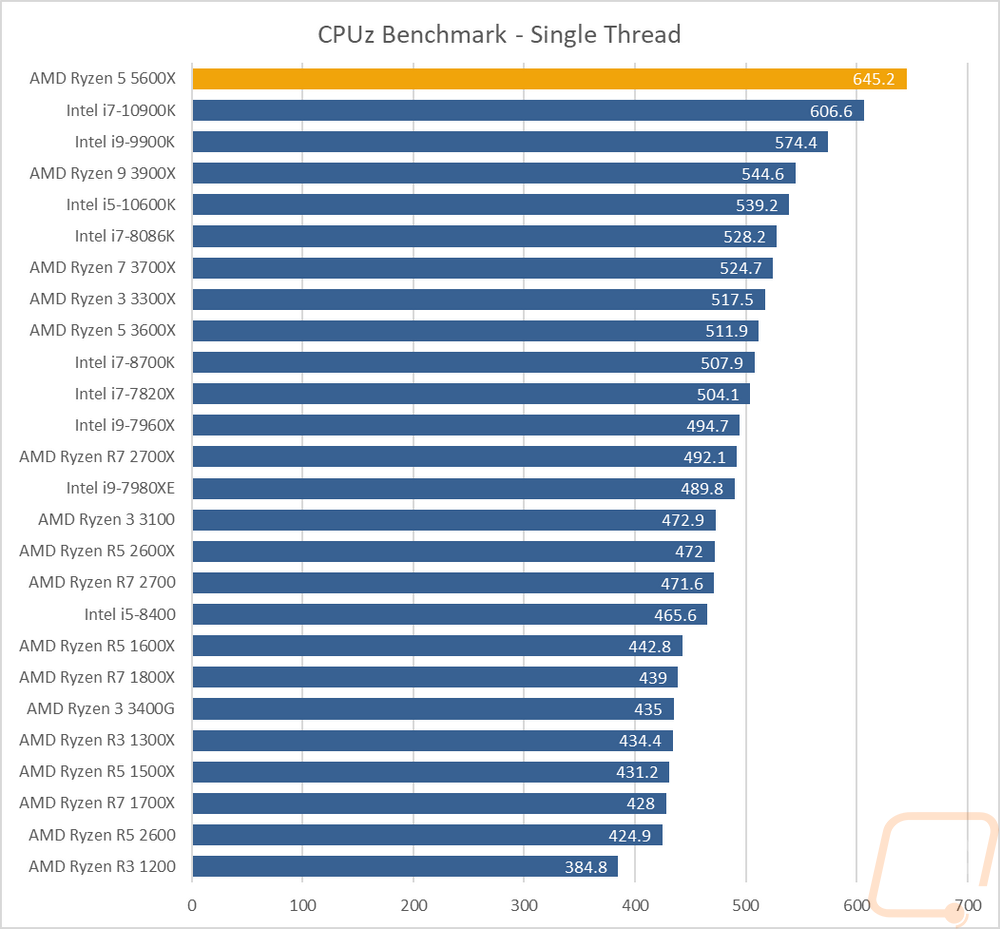 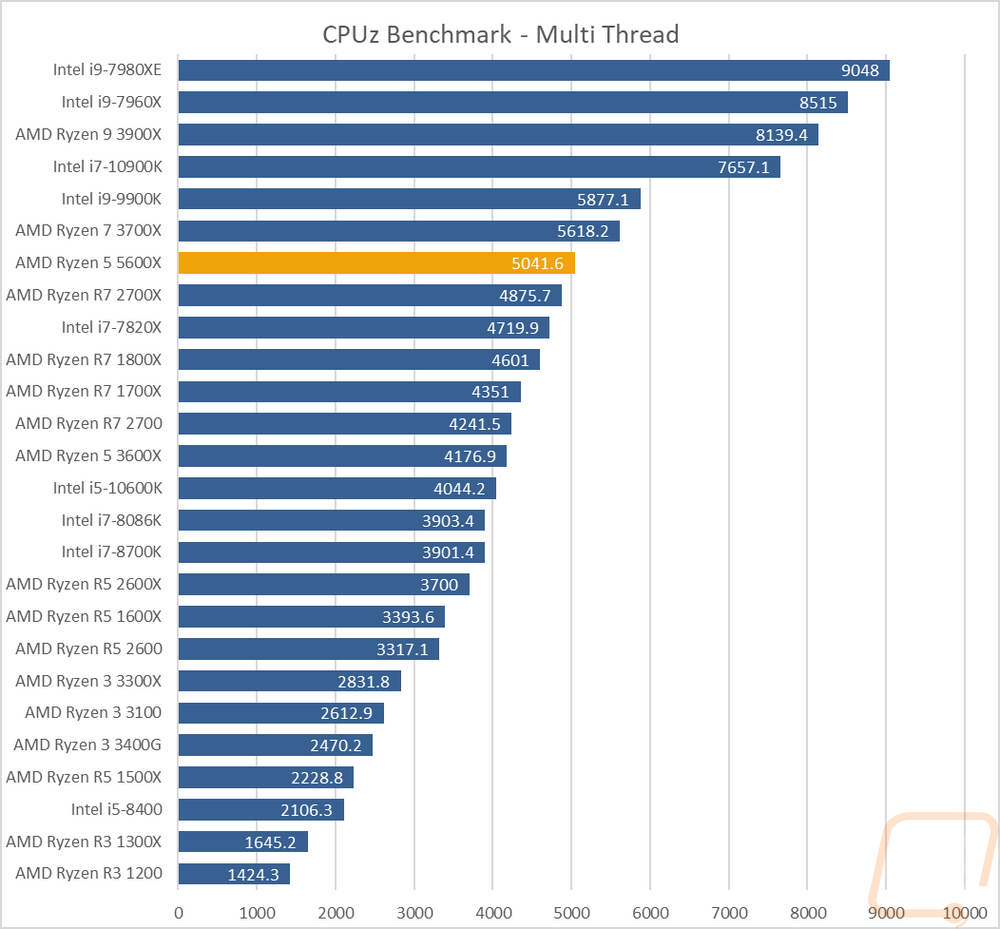 Next, we have wPrime which is a classic overclocking benchmark that calculates pi out to 1024 million digits and is timed. This is a multi-thread heavy test and the 5600X surprisingly was right with the 3600X. The fast single-core performance made no difference here. 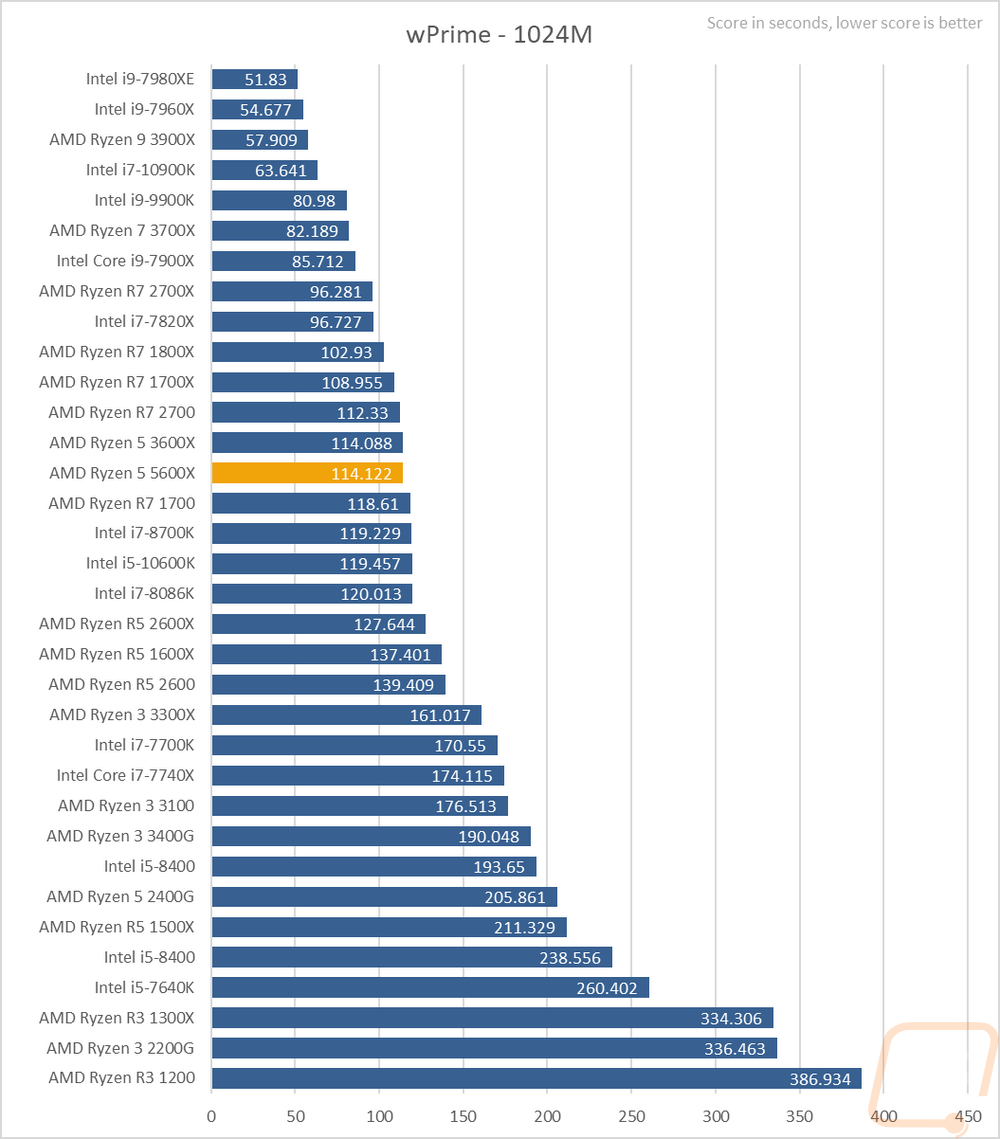 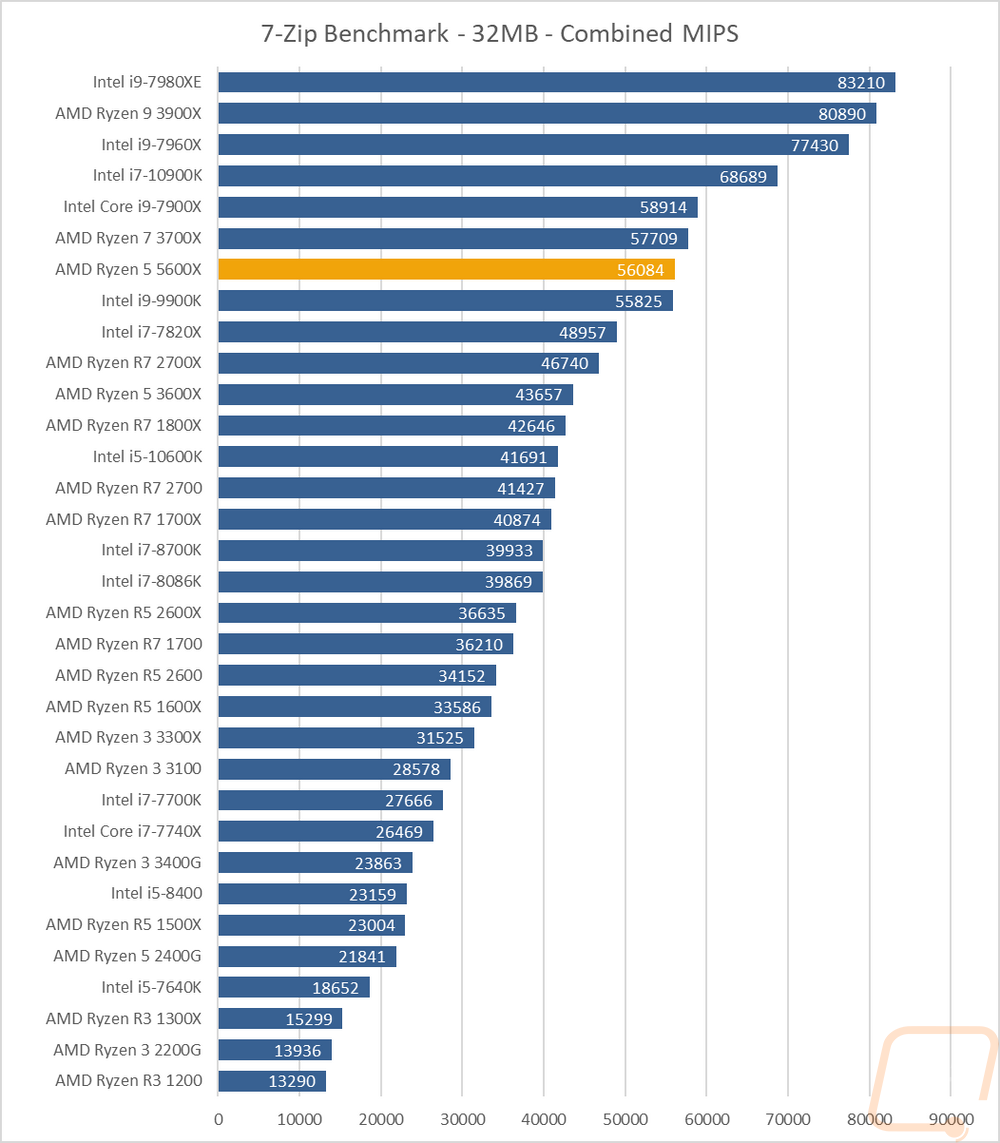 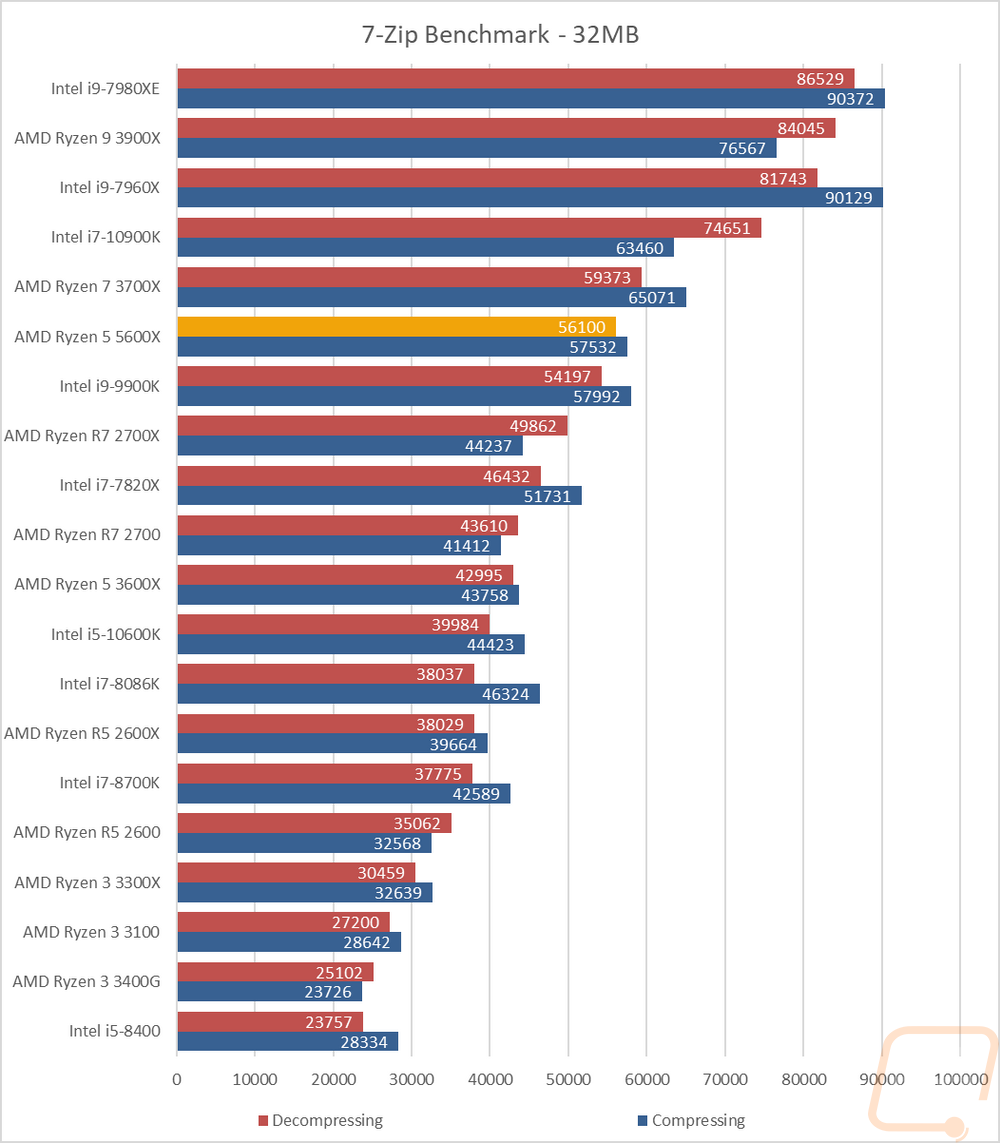 Jetstream 2 is a compilation benchmark that takes a long list of HTML5 and Java in-browser tests and runs them all three times and puts together an overall score. I love this benchmark because let's be honest, most people are using their browser more than any other game or program. Jetstream gives some interesting results sometimes though but it tends to prefer high IPC or single-core performance and there are some situations where it prefers lower core count CPUs. Here the 5600X is far ahead of the two latest Intel CPUs. 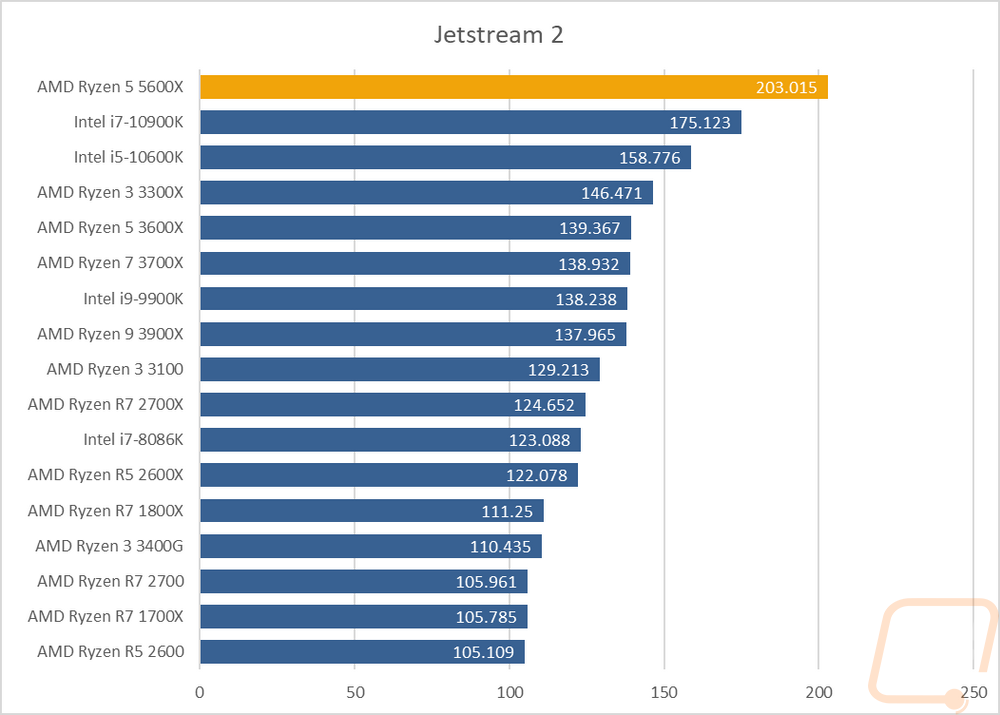 In Passmark Performance Test 9 I run the full CPU benchmark which favors core counts which is why the high core count CPUs are up at the top. But what is impressive is the 5600X coming in just behind the 10900K which has 10 cores. 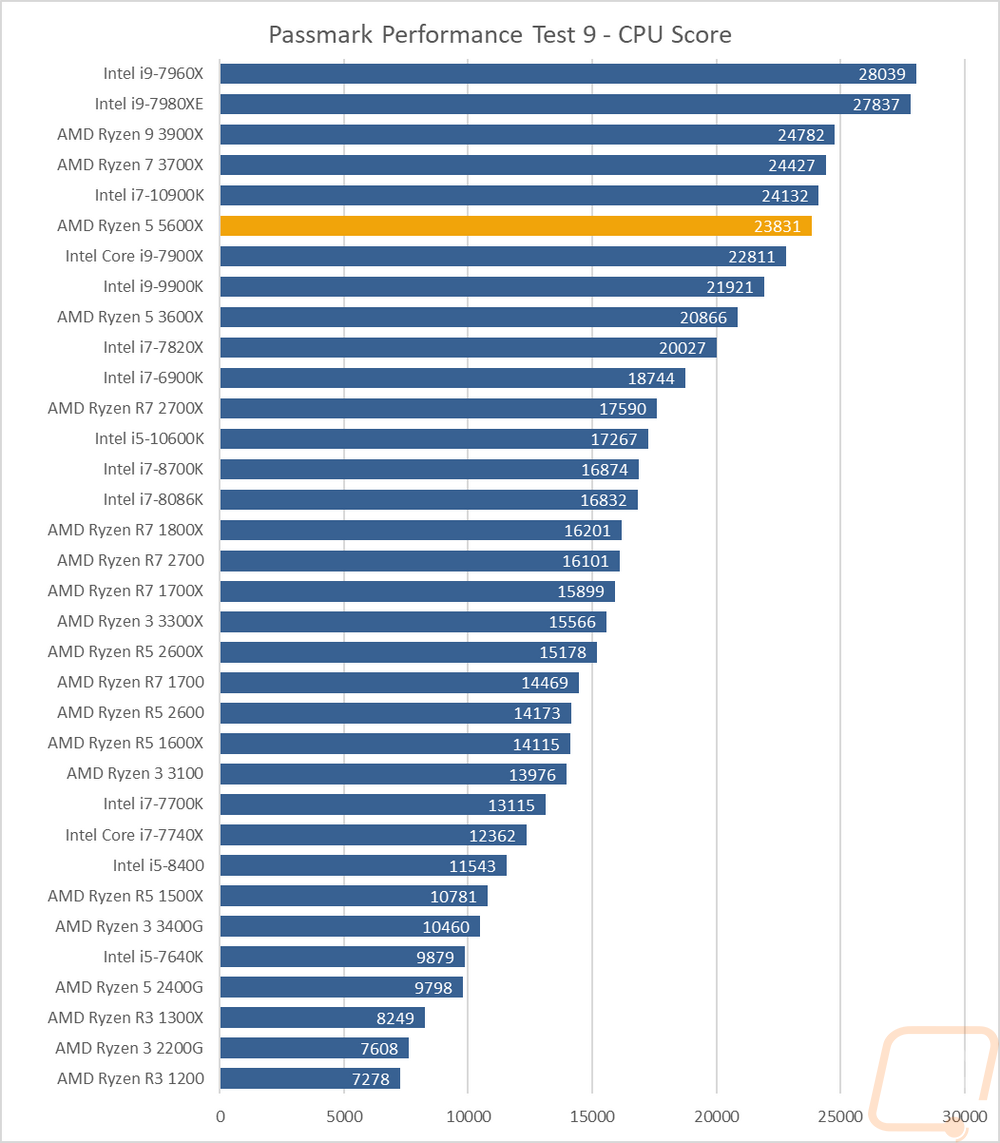 PCMark 10 is a great test because it tests things like video calls, browser performance, excel, and word performance to give an idea of real-world performance. It tends to like higher clock speeds and that is clear when you see that the 10900K is still at the top. But the 5600X still did well, outperforming the 9900K and getting closer to the 10900K even with its lower boost clock speed. 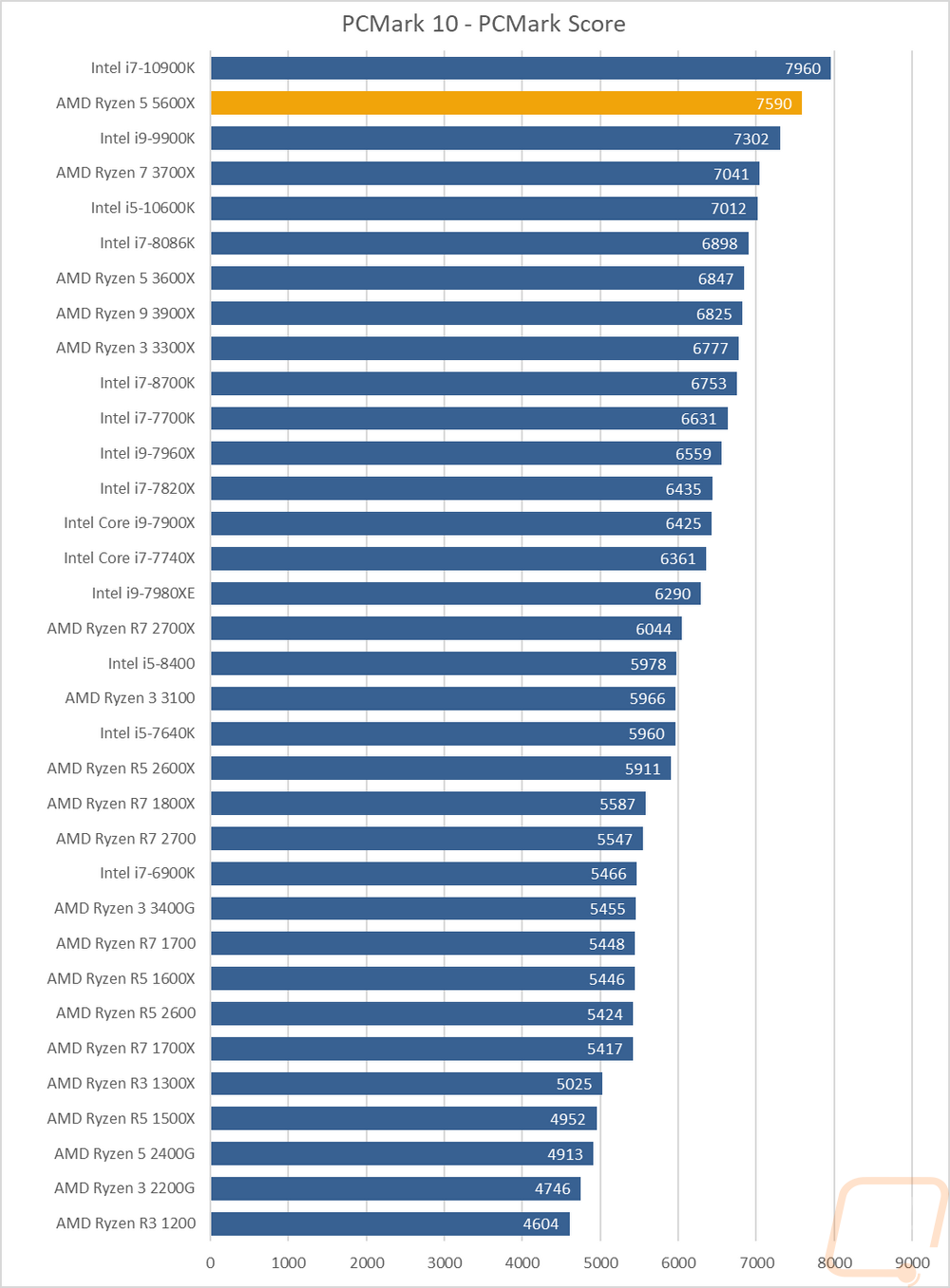 Dolphin 5.0 is a Wii emulator and like most emulators, it doesn’t care about high core counts at all. In fact, it only runs two in total. Clock speeds are king here, in addition to Dolphin favoring Intel in general. But the IPC improvements for Zen 3 have the 5600X all the way up in the top few, competing with the 9900K and 10900K. 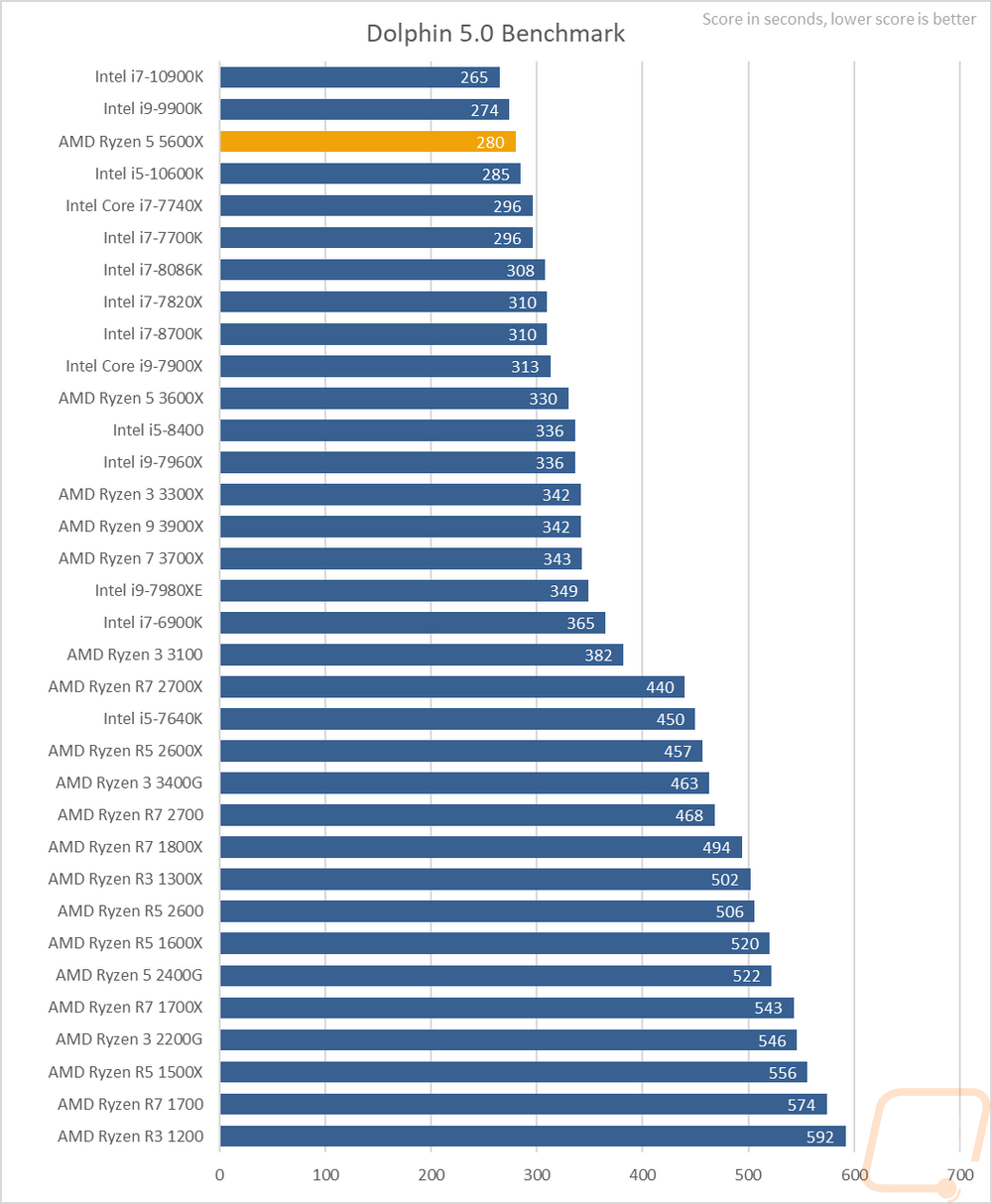 Before diving into game testing I wanted to check out synthetic performance using 3DMark Fire Strike, focusing specifically on the Physics Score which is CPU dependent. Here the 5600X wasn’t running with the 10900K but it did outperform the 3700X which it was running with previously and it well above the 10600K. 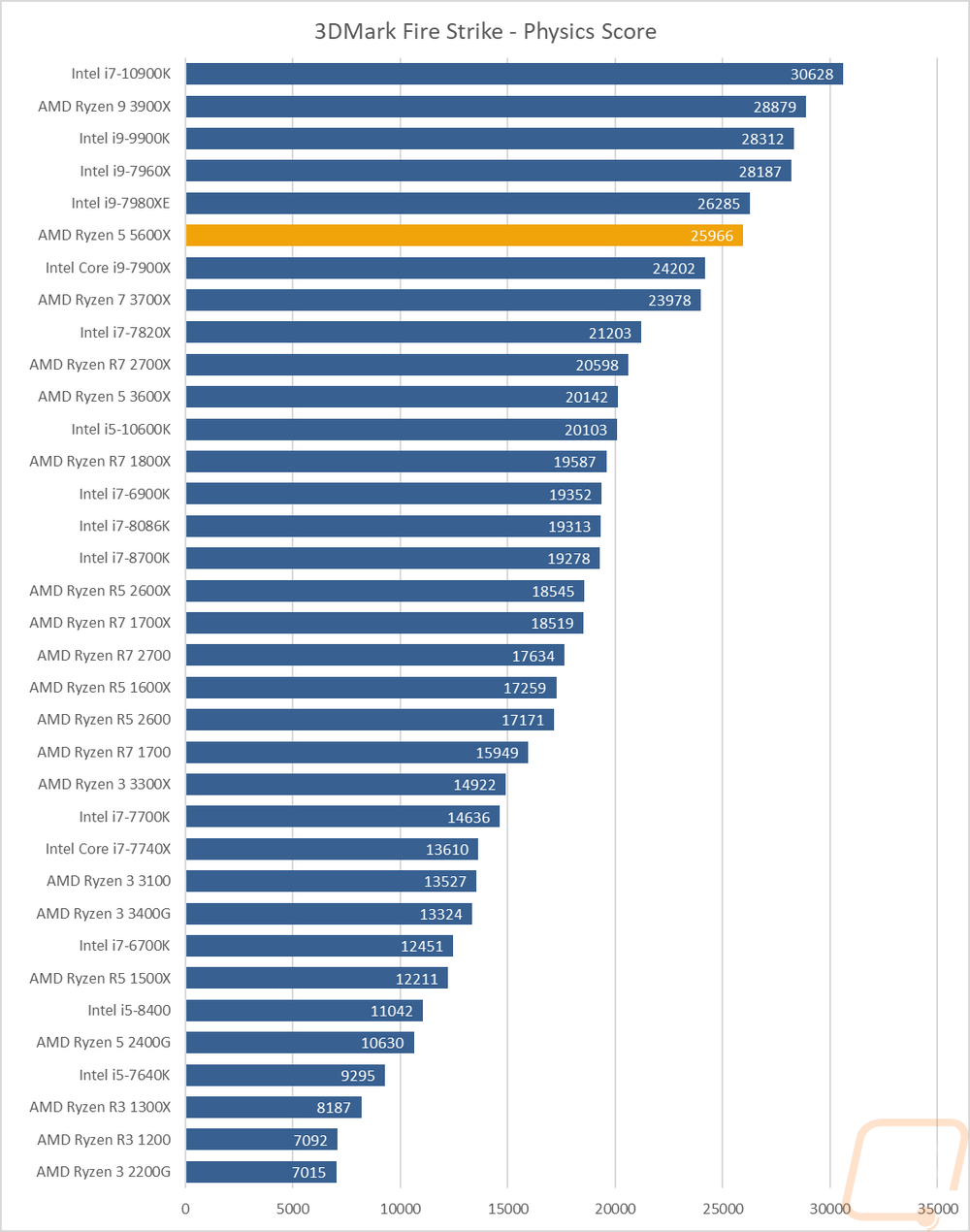 For in-game performance testing on the 5600X, I ran it through a variety of new and old games. TF2, for example, is an oldie but a goodie which at this point is highly limited by CPU performance. The TF2 performance blew me away with the 5600X coming in 16 FPS ahead of the 10900K, even with a lower boost clock speed. You can see the IPC improvements made a big difference in gaming performance compared to the last generation of Ryzen CPUs with even the higher end 3900X coming in well behind the 5600X in all of the games. Some of the games do still have the last few 4.9/5.0GHz flagship CPUs out ahead but we do have to keep in mind the 5600X isn’t AMD's flagship Zen 3 CPU. Its 4.6GHz boost clocks are good, but the 4.9GHz of the 5950X for example is going to do even better with IPC performance. What we are seeing here is the gap getting very small on a lot of the games tested and with TF2 Ryzen passing Intel. 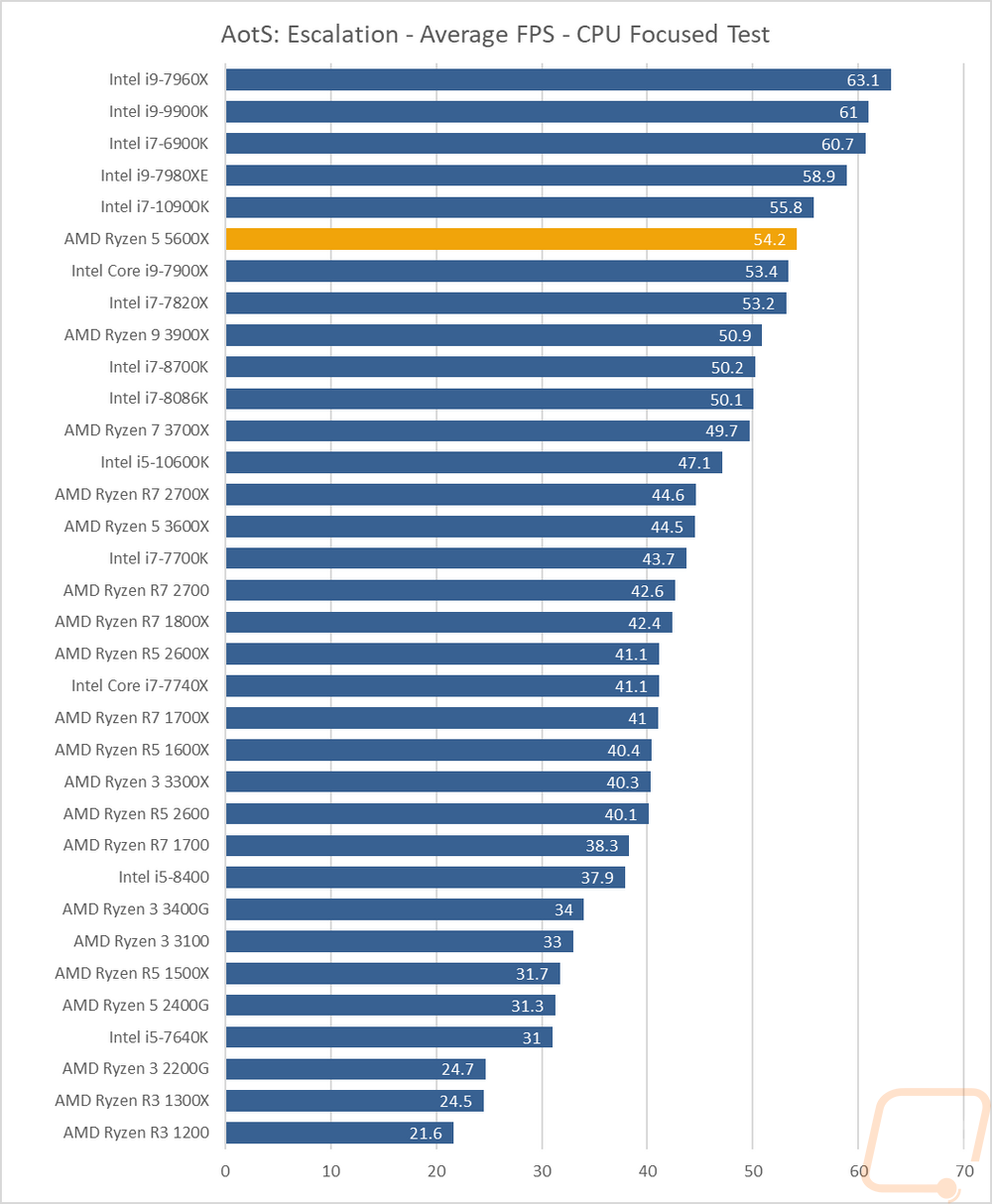 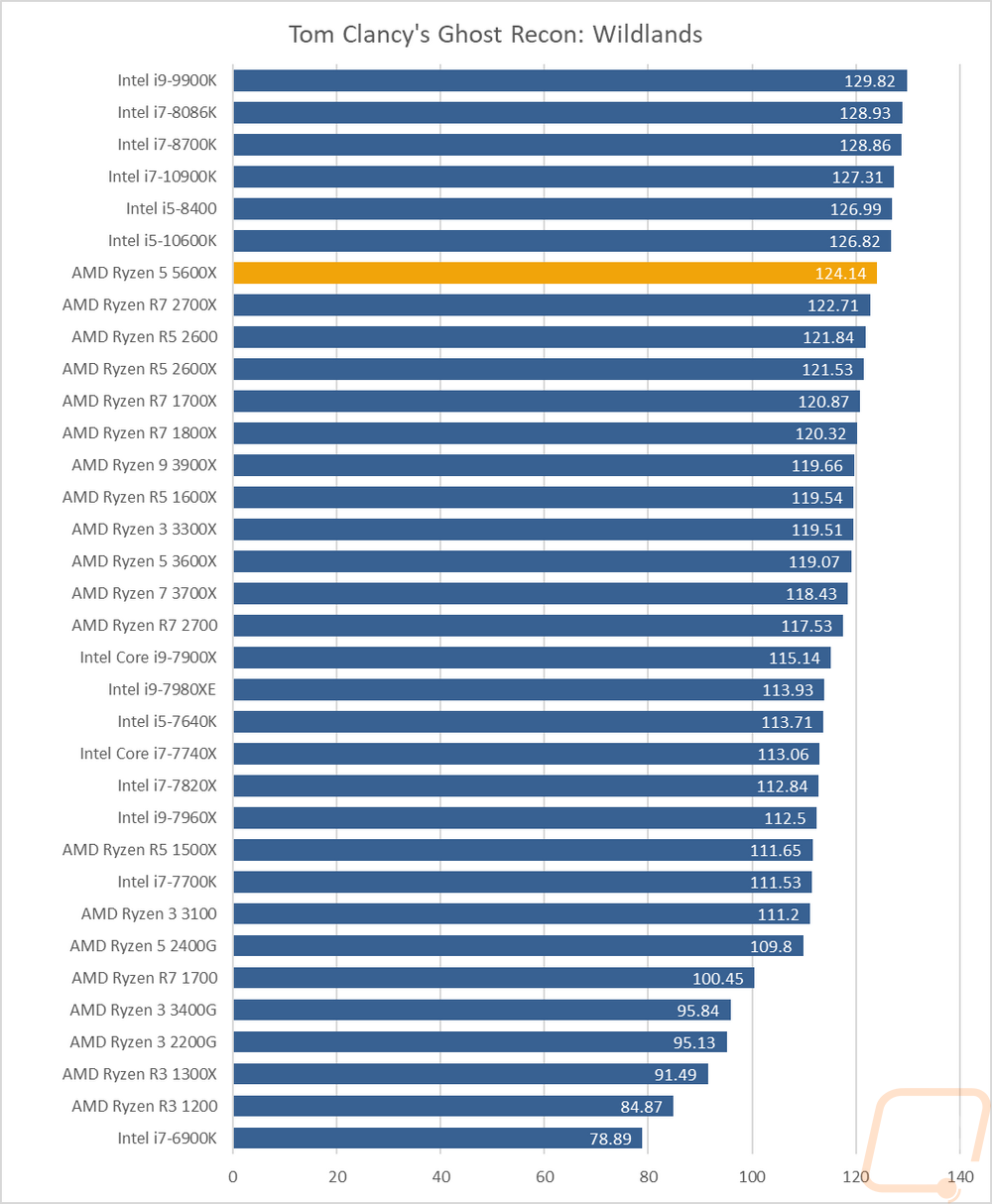 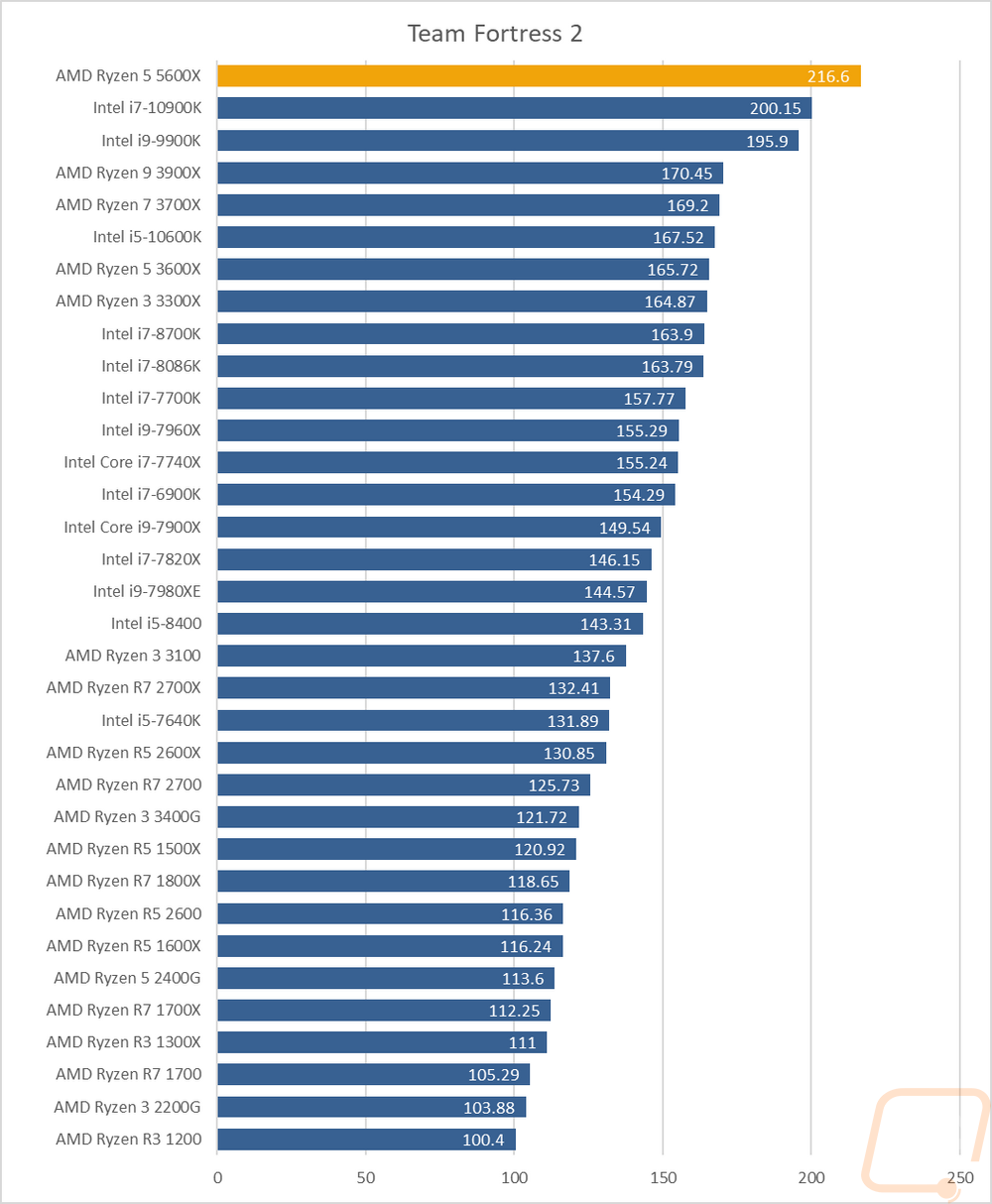 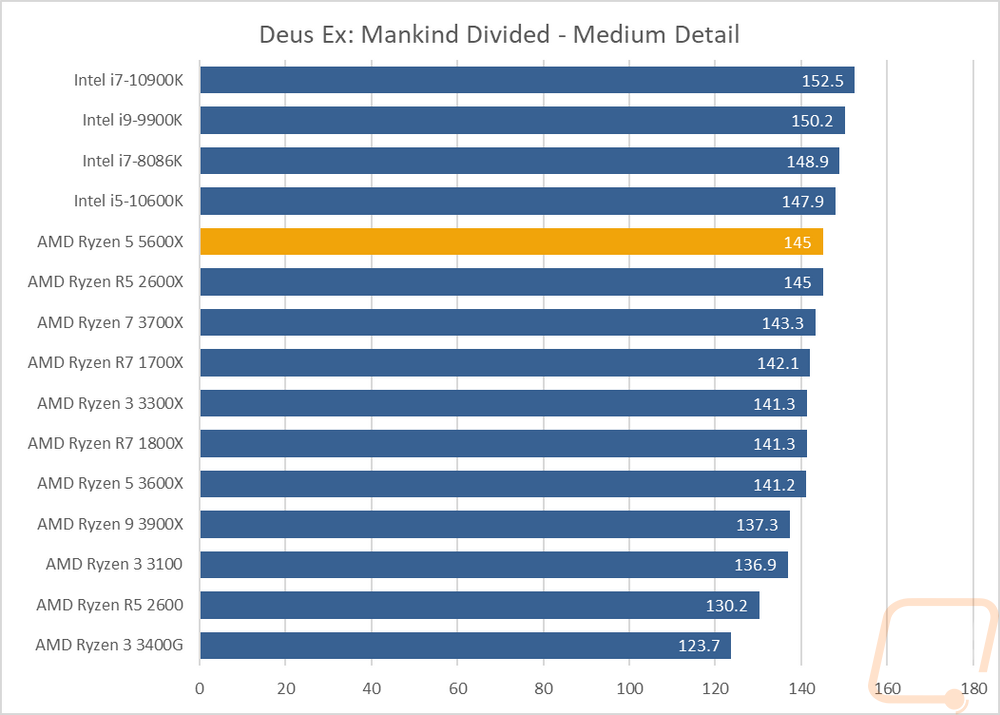 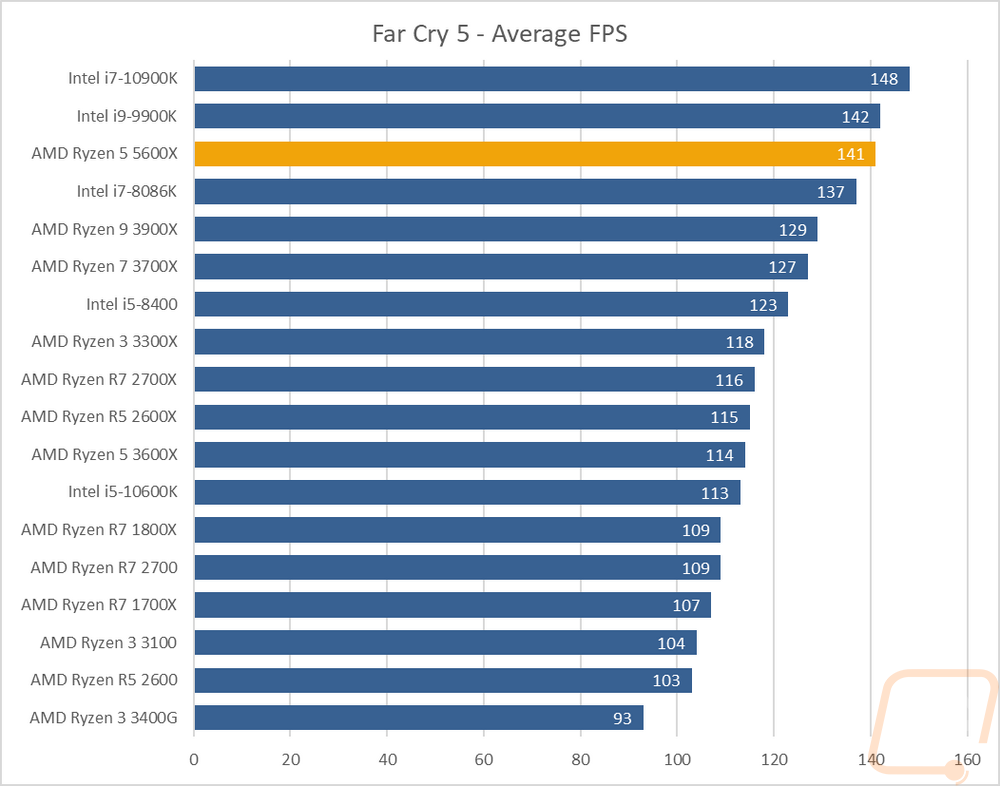 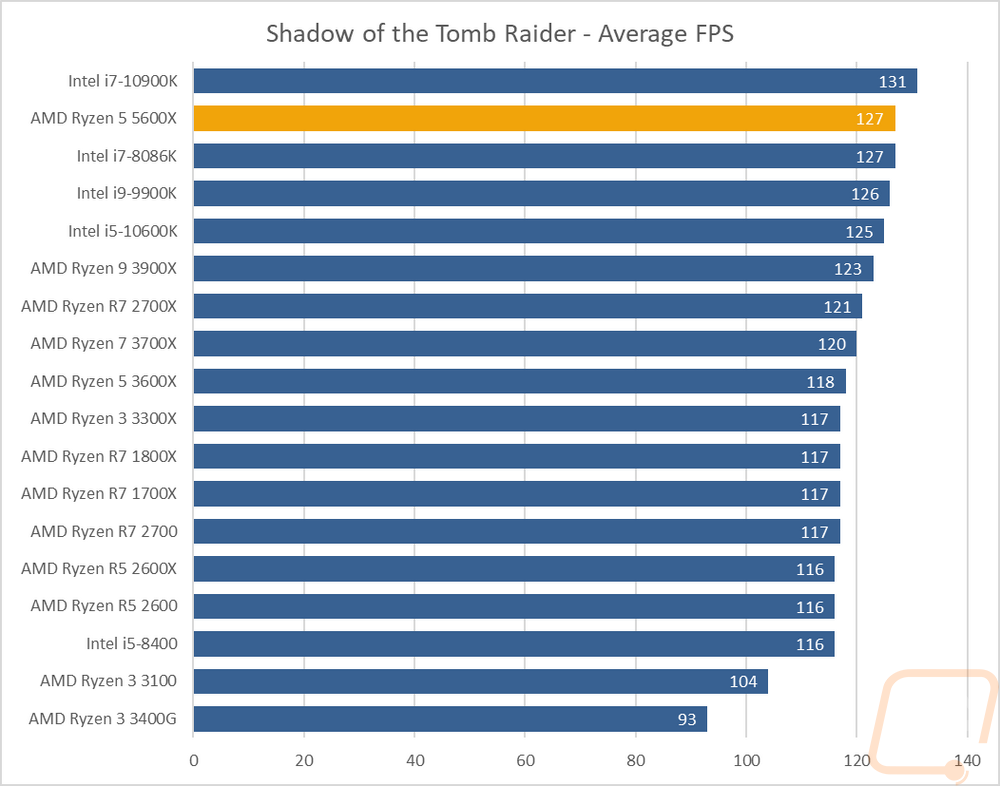 I did also run the whole series of tests in AIDA64 which let us take a look at aspects like memory speeds, latency, and cache performance. There are so many results though I am unable to graph them all and keep them readable but they are an important look at some of the changes we have seen generation to generation that explain the improvements in gaming and programs. AMD has L1, L2, and L3 cache levels depending on the core count. So for L1 each core gets 32 KiB for data and the same for instructions, For L2 each core has 512 KiB per core, and then for L3 the 5600X and 5800X have 32 MiB and the 5900X and 5950X both have 32 MiB per CCD which they have two of. L1 and L2 were done the same on Zen 2 CPUs as well and you can see how they scale up at the models add more cores. So it's not a surprise that the 5600X performs a little lower on those tests, at least the L1 test. For L2 it is surprisingly close to the 10900K even with the lower cache amount. Memory performance seems unchanged from the 3000 series CPUs. But then we see the IPC improvements on the last page with tests like the single and double precision FLOPS and the Integer IOPS tests. The Integer IOPS tests are WAY ahead of all of the 3000 Series CPUs and right with the top-end Intel 10900K which is impressive. 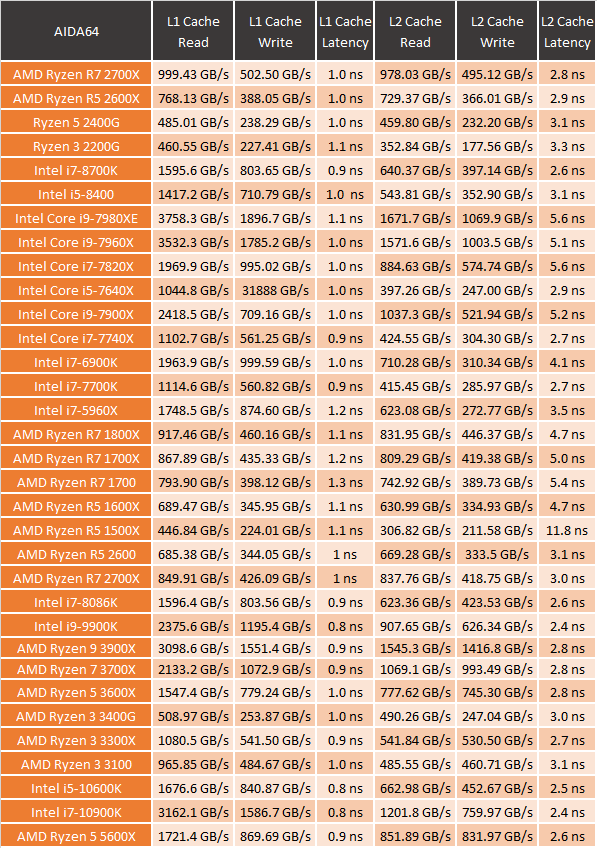 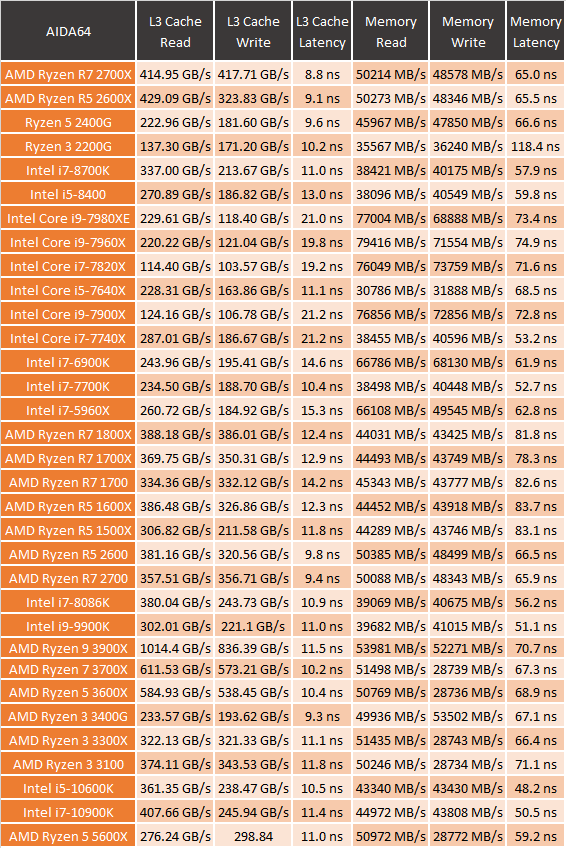 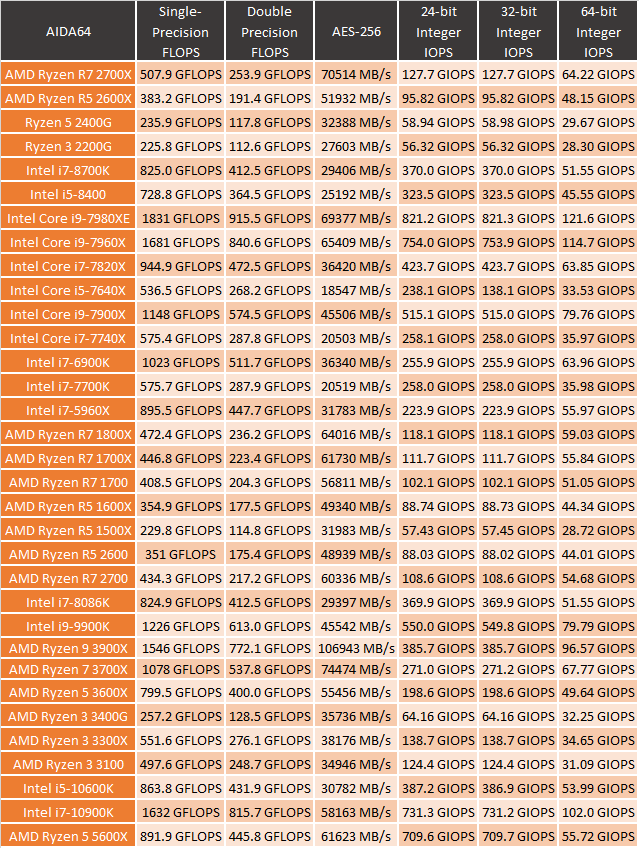 We have 1764 guests and one member online