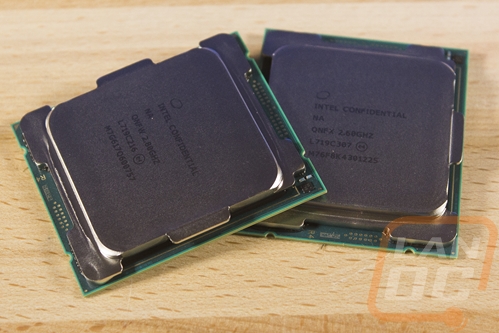 Well one thing is for sure, you can’t call the new addition to the Core-X lineup slow. While I was only able to test two of the four new CPUs. Both were very impressive in just about every test I ran. It was especially impressive in the tests that are more core count dependent like the Cinebench Multi-Core benchmark where the i9-7980XE and i9-7960X made the numbers put up even by the i9-7900X look slow in comparison. Both did well, even in tests that are more clock speed focused but as expected the i7-7700K is still the top dog in those situations. Frankly, these CPUs are touching on the point of insanity. Truly putting to use 8 or 10 cores is difficult unless you are doing video rendering, putting both together to get 18 cores and 36 threads is crazy.

Of course with all of those cores, there is a power cost. The power usage on these topped the charts. So I was actually really surprised when I did our temperature testing and I found that they didn’t run as hot as expected. Now that’s not to say they run ice cold, but when compared to the 7700K they are running much cooler. Not what I expected with that 165-watt TDP. I think the most interesting thing I found though was while the i9-7980XE with its 18 core and 36 threads was a monster, the i9-7960X ended up outperforming it in a lot of the mixed loads. The extra .2 GHz on the base clock helped edge out better performance in a few different benchmarks.

So the performance is great, but I already know what most people are going to be talking about. At $1699 the i9-7960X almost beats out the $1723 MSRP of the i7-6950X and the $1999 price tag on the i9-7980XE puts itself firmly in as the most expensive consumer CPU sold. Even ignoring AMD’s Threadripper, those two price tags are a lot more than a full high-end gaming PC. Frankly, that isn’t really the audience. The entire top end of Core-X as a whole isn’t really focused on people looking for performance/value. These are high-end CPUs designed for people who don’t find a $5k-$10k PC to be a big deal or people who need the absolute cutting edge for what they are working on. To put it in car terms, someone might be looking at the $2.6 million dollars Bugatti Chiron where most of us would be much better served with a Skyline.

Now then we have to take into account Threadripper and just looking at the spec sheet AMD is walking away with the value wins here. Though I consider the size of Threadripper to be a downside in this situation, LGS 2066 supports all of the heatsinks and water coolers that have been out for years on LGA 2011. Hopefully, in the future, I will be able to test them out as well so I can’t comment on the performance comparison between these new CPUs and Threadripper. But I do wish these CPUs were coming in a little closer than twice the price of what AMD has to offer. But as it sits, while expensive, the new Core-X CPUs are monsters and a big step forward from the X99 platform in performance and core count. 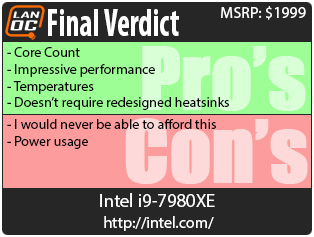 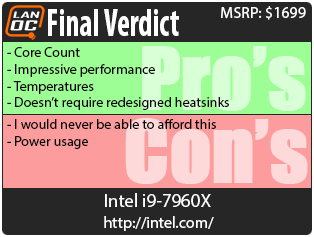 You might call him obsessed or just a hardcore geek. Wes's obsession with gaming hardware and gadgets isn't anything new, he could be found taking things apart even as a child. When not poking around in PC's he can be found playing League of Legends, Awesomenauts, or Civilization 5 or watching a wide variety of TV shows and Movies. A car guy at heart, the same things that draw him into tweaking cars apply when building good looking fast computers. If you are interested in writing for Wes here at LanOC you can reach out to him directly using our contact form.
Discuss this article
Log in to comment
Posts in discussion: Intel i9-7980XE and i9-7960X - Core-X Again

We have 676 guests and one member online